Back in the 1950’s, sports cars were all the rage.  That’s not news to most of you, and by now you’ve heard me say that time and time again.  But let’s explore a bit what that means.  That is, what would you do with your newly built sports car (or newly purchased sports car) in the early to mid 1950’s?

Drive it to enjoy the handling, power, and “air in the hair” feel

Drag race it too

You could do almost anything you wanted – once you built and/or owned your own sports car.

The Early Days of Sports Car Racing – And Dragstrips too: 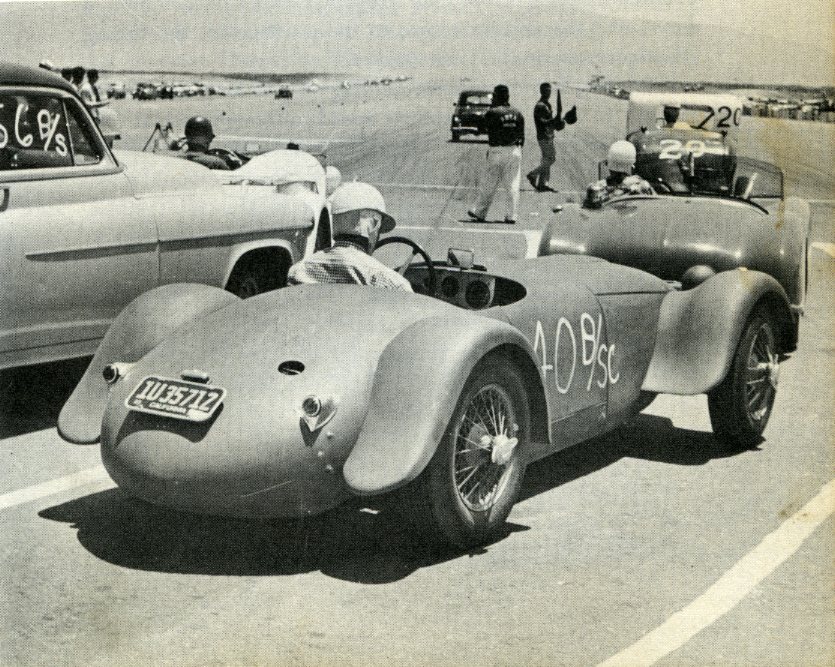 This Photo Was Included in the 1954 Brock Yates Book, Sports and Racing Cars, And Shows Cars Lined Up At The Paradise Mesa Drag Strip Owned by the San Diego Timing Association. Checkout What’s In Front Of The Main Car In The Picture….Just Whose Glasspar G2 Is Racing At This Strip?

So….we tend to think of our fiberglass sports cars as being entered in sports car races only.  That was simply not true.  Many of the cars Rick D’Louhy and I are researching have drag racing history too.  And impressive speeds to boot!

Given that the fiberglass car industry started in Southern California, it won’t be a big surprise to you that the nation’s first dragstrip was born there too – the Santa Ana Drag Strip at the Orange County Airport.   We’ll get to another reason at the end of this story.  But first, let’s talk a little about the Santa Ana Dragstrip.

C.J. “Pappy” Hart started the raceway in 1950, and he commented on this in a 2001 interview in the “National Dragster” Magazine as follows:

“There’s been drag racing since cars were invented, but I guess they say I invented drag racing because I was the first one to have a commercial strip. There was one in [Goleta, Calif.], but they charged no fee at the time. I saw a need to get people to stop racing on the streets; that was dangerous.”

I found two excellent websites discussing the history of this dragstrip that you may find interesting.  Click on the links below to review each one:

I think you’ll find your time well spent reviewing the history on these websites and enjoying the photos.

Sports And Racing Cars by Raymond and Brock Yates (1954)

Good friend John “Buz” Buzby (co-builder of a car called the “Gazelle” and later the “Navajo”) sent me a book last year by Raymond and Brock Yates called “Sports and Racing Cars.”  The book was printed in 1954 and has a wonderful chapter on drag racing titled “Thrill and Skill on the Drag Strip.”  Let me share a few paragraphs of what these authors had to say about drag racing and the history of it as well. 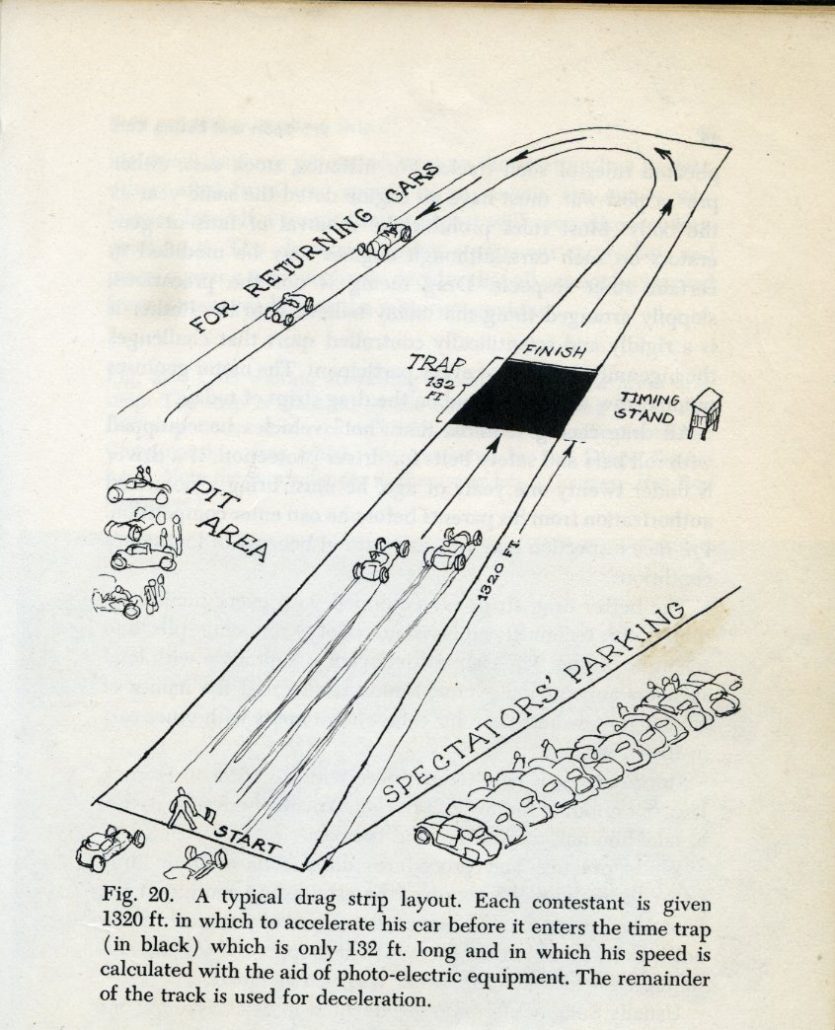 “Every Sunday nowadays thousands of roaring, snorting, growling motors meet competitively on the drag strips of the country.  Here the novice may safely try his driving skill under sound technical supervision.  Here, too, he may test his skill as a motor mechanic.  Only the precisely adjusted motors win.

Drag strip racing calls for everything that the Indianapolis driver must have: sound judgment, an ear for motor adjustment, a cool head and more than a tinker’s knowledge of motors.  Given a good driver, the motor that wins the drag race is a motor that sucks every last ounce of energy from its fuel.

Drag racing began at Santa Ana, California, a few years ago as a loosely organized effort by youngsters to run car acceleration tests….Today’s drag race, whether on Long Island or at Los Angeles, is apt to find anywhere from one to three thousand spectators present and anywhere from fifty to two hundred competing vehicles and their drivers waiting to thrill the crowd with safe, sound demonstrations of skill.”

This should whet your appetite for the chapter on drag racing shown in this book.  If you’re interested, I’m sure you can find a copy on ebay.  I think you’ll enjoy the read.  Thanks again to “Buz” for sharing this wonderful resource with all of us – and the Glasspar G2 surprise shown in the book too!

Good friend and racing historian Leslie Long was at the Santa Ana dragstrip back in the day and has compiled and made available much of the results from each weekend’s racing.  I’ve gone through the database and found the information below which shows Glasspar G2s, Woodill Wildfires, and even Victress sports cars at the drags and turning in some great times.

Checkout the data below gang.  Could your prized fiberglass possession be one of these cars? (I wonder how long it will take Pat Hoover – Bill Hoover’s son  – to see this info and call me to confirm…*wink*) 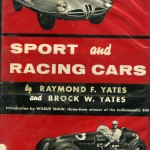 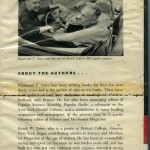 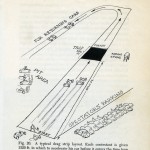 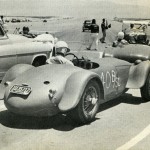 Interestingly, This Photo Was Included in the 1954 Brock Yates Book, But Shows Cars Lined Up At The Paradise Mesa Drag Strip Owned by the San Diego Timing Association. Checkout What’s In Front Of The Main Car In The Picture….Just Whose Glasspar G2 Is Racing At This Strip? 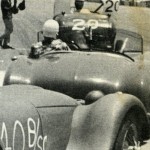 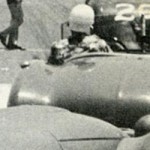