This is the first in a series of articles I’ll publish in the next few days on the story of the Gazelle Sports Car built in 1953 in Rumson, New Jersey by James “Jim” F. Craig and John Warren “Buz” Buzby.  In early 1954, this car was re-badged as the Navajo Sports Car, and the location of planned car sales was switched from Rumson, New Jersey to Manhattan at 1871 Broadway, New York City.

It will be a treat to introduce you to the folks involved and the story of the car’s design, creation, and debut on our Forgotten Fiberglass website.

Back on May 19th, 2008, I received an exciting e-mail that said the following:

My name is John Buzby and I was a partner along with James F. Craig in making the Gazelle.  That was the original name.  The Navajo was built in Rumson, New Jersey and was a hit in the 1954 New York Auto Show.  What information would you like?  Not a lot of pictures on hand, sad to say.

Wow!  How lucky can a researcher like me get?  I had to talk to Buz and learn the story about the Gazelle and Navajo.  Boy this was going to be fun!

I quickly learned that the designer of the car was James  F. “Jim” Craig of Rumson, New Jersey, and his young and enthusiastic partner at the time was none other than John Warren “Buz” Buzby – the person above who had contacted me via e-mail.  We’ll discuss the history of each of these gentlemen in our next story, so today, let’s review the story of the Gazelle (as it was first known and named by “Buz”) from Ford Times Magazine, October 1953. 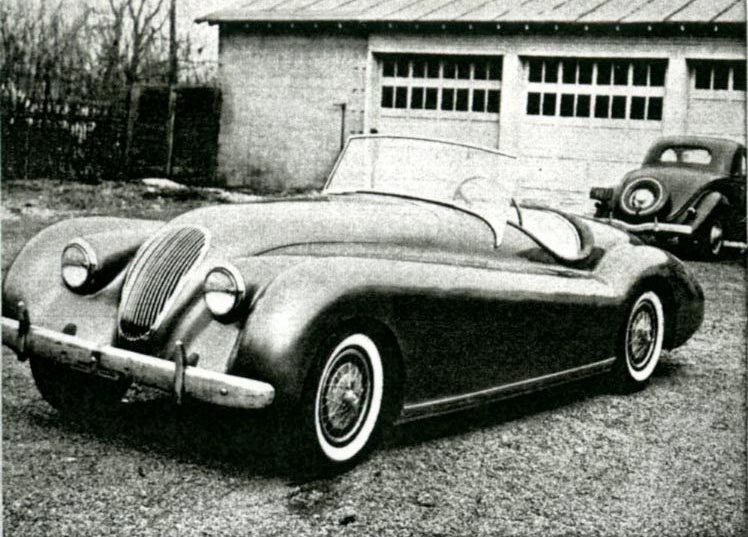 What A Handsome Looking Car Gang…..Here’s The Gazelle Shown in Late 1953 In Front Of Jim Craig’s Rumson Body Shop in Rumson, New Jersey. “Buz” Told me That’s His (Buz’s) 1935 Ford 3 Window Coupe In The Background.

The Fiberglass Gazelle
By Melvin Beck

James Craig, a Rumson, new Jersey automobile body shop operator, calls the car pictured above the Gazelle, and is turning out limited copies of it using frames and chassis of 1942, 1946, 1947, and 1948 Fords.  In utilizing the frames, Craig lowers them two and a quarter inches, and equips them with special air shocks and a gyro skid control bar.

The car’s Mercury engine is fitted with:

Craig develops 170 horsepower with this rig and considers the acceleration of the 1,500 pound car exceptional.

The fiberglass body is molded in a single piece, and the doors, trunk lid, fenders, and hood are then cut out by hand.  The single-piece windshield is curved and the car’s hard top slides out of sight behind the seat.  The doors, balanced on eight-pound loaded springs, telescope into the fenders at the touch of a button.  Any bumps or scratches are easily repaired with a handy kit that is stored in the car.

The Gazelle will comfortably seat three persons, and use of the trunk compartment as a rumble seat will admit another passenger or two. 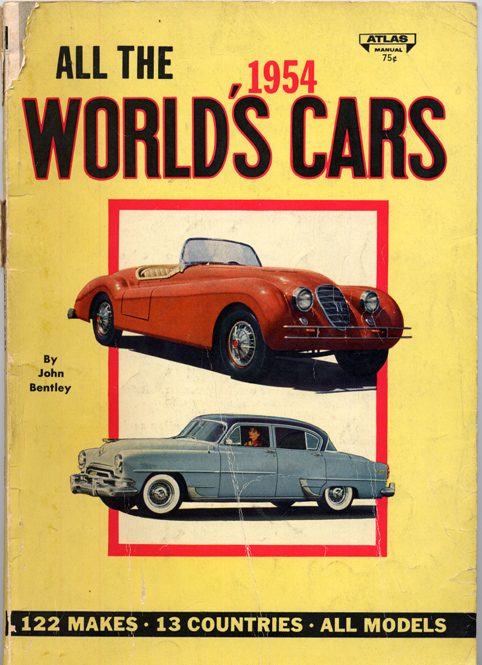 Thoughts on the article:

I asked Buz about the design of the car being so similar to a Jaguar XK120.  He agreed, but didn’t think this was Jim’s original intention.

“Jim had started out wanting to design a fiberglass sports car using the foreign jobs as his source of inspiration.  But looking at the finished product, it sure seemed like the XK120 played a big part in what he had in mind.”

I reviewed the 1953 Ford Times article with Buz and he set a couple of things straight as follows:

In the Fall of 1953, Buz took the Gazelle to a car show at Asbury Park, New Jersey. Jim Craig did not attend the show.  This was the only show that Buz can remember that the car was in – before it was re-badged as the Navajo in 1954 – more about that in a future story.

In late 1953, the car was sold to a Ford Dealership in New York City, and the car was re-badged as the Navajo Family Sports Car.  Jim Craig was still going to supply the bodies and build the cars, but only this one car went to New York City and became the “Navajo.”  The Navajo was shown to an excited crowd in the February 1954 World Motor Sports Show in New York City.

Jim and Buz built at least one finished car (Gazelle) and at least one additional body – maybe more.  Since it was so long ago, Buz isn’t positive, but another car may have been built.  These were completed before the “Navajo” debuted in the February 1954 auto show discussed above.

I look forward to sharing more about this nicely designed and built car in the near future.  I think you’ll have a blast reviewing them in every way.  And who knows….maybe one of you lucky car guys or gals out there might find a Navajo.  If you did, it would be the first one known to survive, and “Buz’ would love to see it too, after so many years. 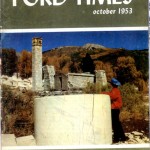 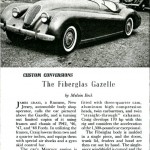 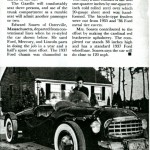 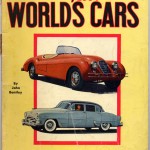 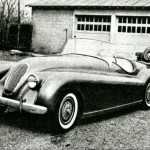 Here’s The Gazelle Shown in Late 1953 In Front Of Jim Craig’s Rumson Body Shop in Rumson, New Jersey. “Buz” Told me That’s His 1939 Three Window Ford Coupe In The Background. 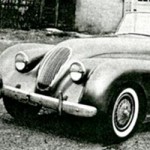