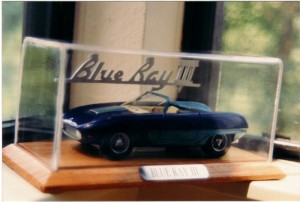 I’ve asked Jim Simpson of “Simpson Design” if he would be willing to tell us a bit more about some of his other design projects that he’s shepherded these past few years.

Jim is a gracious friend and enthusiastically said “yes” and sent in the following story today about one of his cars – “Blue Ray 3.” Let’s hear directly from Jim about the story of the “build” of this Nardi concept car.

The Building of Blue Ray 3:

Fall of 1991 my regular transport driver Jim Stevens and I brought the 1955 Nardi Lancia Blue Ray 1 concept car to Las Vegas for the SEMA (Specialty Equipment Manufacturers Association) show. The largest automotive trade show in the world, SEMA at that time was about 6 ½ miles of aisles. We were there at the invitation of Nardi USA, the US subsidiary of the Nardi company of Torino,Italy, to display the car in their booth.

With the car safely installed on its display stand, director Doug Speer of Nardi USA, Stevens and I

to dinner in Las Vegas at a somewhat out of the way Italian restaurant. We felt we deserved a celebration after the long day of setup but planned on making it an early evening prior to the opening day of the show.

After some great Italian food, excellent conversation and probably too many glasses of Chianti, discussion turned to Nardi and why a company so rich with history was no longer producing show cars. I started sketching on napkins and came up with a few ideas of where that legacy might have led. Finally we called it a night and agreed to pick up the conversation the next day. 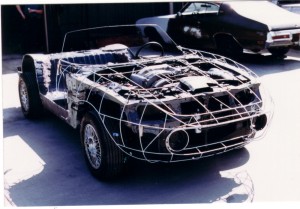 Next morning at the show, as I was doing a final wipe down on the car, a fellow came up and said, “Jim Simpson? “You’re needed right now in the Nardi press conference.” “Great,” I thought, “I’m standing in grubby jeans and a shop shirt.”

But I follow him, walking into the conference just in time to hear the words, “This is Jim Simpson, who will be building our show car for this year’s upcoming Pebble Beach weekend to celebrate sixty years of Nardi”.

The reality of the moment must have sunk in rapidly because I couldn’t feel the floor beneath my feet. I heard Mr. Speer explain that Nardi had been away from concept car production for too long and it was time to revive the tradition. Over the next couple of days, Mr. Speer and I worked out many details of the car I would build for them over the coming months.

The Nardi company is most famous in this country for lovely wood rimmed, light weight steering wheels that adorned many a Ferrari. But an interesting fact about Enrico Nardi is that he also produced performance enhancing parts for all sorts of small and medium displacement European cars.

In his shop just down the road from Italian auto maker Lancia, Enrico Nardi created camshafts, exhaust systems, and intake manifolds with multiple carburetors for all kinds of cars, including Lancia’s. Seems he had a real knack for it. 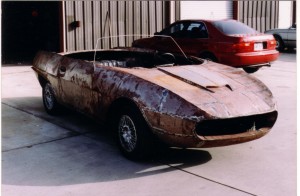 Unsatisfied with making accessories, Nardi turned his hand to car building, deciding his company would develop chassis’s for street and racing cars alike.

Though not a coachbuilder, in 1953 he went forward with a bold project, the building of a fanciful show car to show off his performance parts and increase awareness of his company.

Nardi went down the road to Lancia to acquire Aurelia mechanical components to start the process.  He built a fabulous tube chassis to house the Lancia 60 degree V-6 engine, equipped with his headers, intake manifold and twin webber 2bbl carbs and one of his legendary camshafts. Fitted in the rear of the chassis were the Lancia transaxle, Aurelia B20 suspension and brakes.

To the young Giovanni Michelotti he gave the task of penning a wild bubble top creation to be built in aluminum by Alfredo Vignale’s company. Blue Ray 1 was completed in time for the 1955 Italian show circuit, and was one of the stars of the Turin Auto Salon. It would also be shown at Paris and Geneva before being sold to a client in the USA.

Fast forward nearly 40 years to 1991. In the spirit of that first Nardi show car, we wanted to produce something interesting, exotic, slightly period, but with very modern, state-of-the-art mechanicals. We wanted to avoid creating a car visually so modern that it would draw attention to Nardi’s 30-year absence from car production so we chose to create a look from the late 60’s / early 70’s.

And we elected to keep the 50’s color scheme along with the wheel base. At the time, Nardi and Mazda had an interesting working relationship in Japan so we decided to build the new car on a brand new prototype Mazda 929 that featured a 4-cam, V-6 powered, rear wheel drive chassis.

We originally planned to create a new car every 2 years, each designed to visually span a decade at a time, softening the fact that Nardi had produced no show cars in years. The philosophy was simple – create concept cars that captured the imagination and used Nardi components. These limited production concept cars would be shown and then sold on to wealthy clients, just as in Nardi’s day. 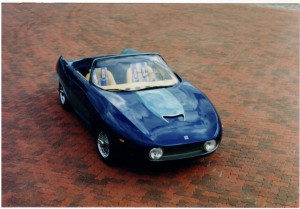 In the couple of months after SEMA, calls and drawings went back and forth to both Nardi USA and Nardi Italy. Working from the design we had settled on, I created a scratch-built 1/24th scale model as the roadmap for building the real car.

I built several models, sending one to Doug Speer and a second to Nardi of Italy. One stayed on my desk until the project was underway.  Just before Christmas, 1991, Interstate Transport called to inform me that they had a car from Mazda for me. This came as a bit of a shock.

Speer laughed when I called him and said he hoped it was not too much trouble but he would be joining me the next day in the shop. Sure enough, he flew in and we spent the day going over design details. That evening he, my wife and I went to dinner in the 929 prototype.

Doug Speer, as it turned out, was not your typical corporate suit. The following morning he arrived wearing jeans and a “t” shirt, got a cup of coffee and said, “Where do we start?”  We began taking the car apart and, in a few hours, we had it down to a shell, sheet metal and mechanicals still intact. We planned to shorten the wheel base right at 12 1/8 inches to duplicate that of Blue Ray 1.

We would also be converting a 4-door hard top automobile to a 2-passenger convertible. The car shell went up on the lift so we could remove the drive shaft. Then we measured the chassis, determining the best point to cut, and proceeded to cut across the floor and cut the top off.  A few hours later, we were welding the two halves back together, adding 10-gauge steel stiffening welded to what would become the inside of the rocker panels. 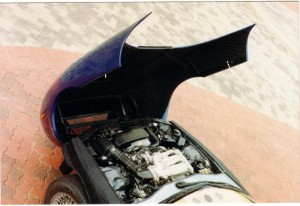 In a few days, I had most of the quarter-inch steel, wire frame buck shaped, ready for forming the exterior sheet metal. A couple of months later along, with help of several guys working with me, we had the exterior body work roughed in.

Once I had the body in primer, I turned my attention to the interior. I found myself wanting to use some of the Mazda bits since there were so many electronics on the car. I had designed the interior into the model so I knew what I was looking for.

The dash was all steel. Along with the seats and door panels, it would be skillfully covered in chamois colored, Bridge of Wier Scottish leather, by my upholsterer, Ken Arnold. Ken was no stranger to good materials; he had done the interiors for the original Nardi Blue Rays when we restored them for Pebble Beach. He also made up a set of Wilton carpets and scratch built the Hartz cloth top and boot for the car.

The wheels were custom made by Dayton Wire Wheels. The exhaust was topped off with two large resonated tips – in fact, that was the extent of muffling other than the catalytic convertors. We removed the automatic transmission and replaced it with a 5-speed RX7 gearbox from Mazda Motorsport that we adapted to the engine.

We finished Blue Ray 3 with a couple of weeks to spare, and loaded it onto the truck, along with original Nardi Blue Rays 1 and 2, headed for California. As fate would have it, the transport carrying the 3 cars to Monterey broke down about 200 miles out.

Blue Ray 3 was rolled off the truck to fetch parts for the emergency repair so the truck could complete its trek. The 3 cars were the centerpieces of the 1992 Concourso Italiano in Monterey.

We had actually managed to complete the car in 7½ months. We couldn’t have accomplished this feat without a host of help behind the scenes – among them Lee Anthony, Andy Mazur, John Giacchi, Garon Bracewell, Ken Arnold, Kevin Hines, Lee Blanchard, David Portlock, and Joe Linbeck. Sincere apologies if I’ve left anyone out and, as a gesture of thanks, I’d like to dedicate this article to all of them for their help in making this possible. 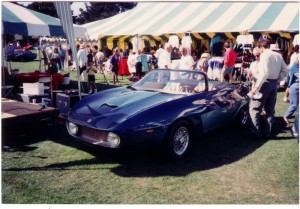 What a great story about both the history of the Blue Ray cars and the latest design added to this legacy – the Blue Ray 3 by Jim Simpson and team.  I very much look forward to the next story by Jim and the direction it may take us.  Keep the stories coming Jim 🙂  and be sure to checkout the latest news on the Simpson Design website by clicking here. 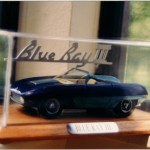 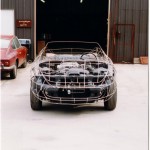 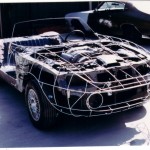 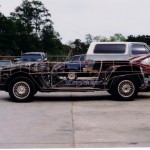 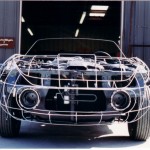 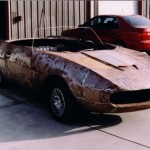 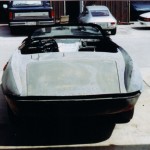 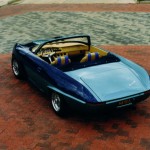 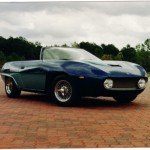 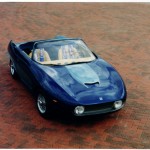 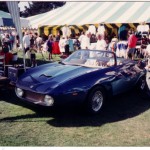 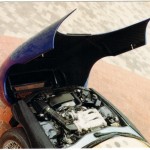 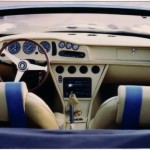 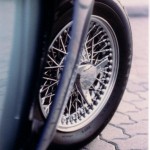 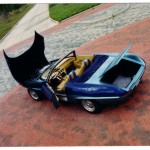 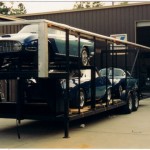 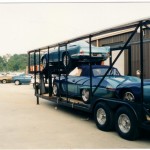 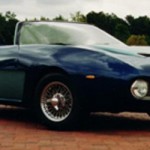