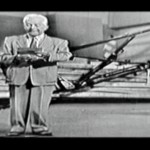 Art Baker Introducing Segment on Building a Woodill Wildfire in 1955

Many of you have seen this video when I sent it via e-mail as a link last year.  But… there are so many newcomers to our Forgotten Fiberglass Website that I thought we should highlight it again.

Back in 1955, building your own sports car was the rage across the country and in automotive magazines too.  It started in late 1951 with Glasspar, Lancer, and the Skorpion/Wasp being introduced at the Petersen Motorama and it continued to build.  The “golden age” of building your own sports car is centered on the years 1952-1956, which Rick D’Louhy and I have labeled “First Generation Fiberglass Cars”.  More about this term in future stories, and our upcoming “Forgotten Fiberglass” book.

We don’t think of many TV shows featuring these cars back in the day, but that’s because it’s such a long time ago.  Too far to remember.  However, when Rick and I started our interviews with the founders of these companies – the situation quickly changed.  KTLA TV in Los Angeles filmed the Petersen Motorama each year from 1950 thru 1955.  Doc Boyce Smith from Victress is interviewed during one of these segments, and Rick and I are still on the lookout for these films/videos/kinescopes.  There are many more interviews on TV that we hope have been saved and that can be shared via our website. 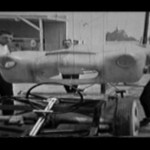 Fitting the Body to the Frame – Is the Entire Build Possible in Just 4 Hours???

Bill Tritt from Glasspar was interviewed on a show called “Success Stories”.  It was sponsored by Richfield Oil (also sponsor of the Disney Autopia Ride where the bodies of the cars were designed by Bob Gurr, built by Glasspar, and assembled by Mameco), and we’re on the lookout for this too.  We’ve found some episodes of this “series” so far – but not the right one with Bill Tritt.  When we do – you can be sure we’ll share it with you as well.  And…we are always on the lookout for original film and pictures from any of you out there showing these cars when they were being built – and when completed – from the 1950’s and 1960’s.  So don’t forget us if you find such cool items gang 🙂 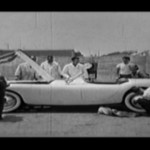 The Car’s Nearly Done After Just 4 Hours – and They Took a 45 Minute Lunch Break Too!!!

Back to the story…

Let’s  look at the time it took a person to build an average sports car in the 1950’s – it was calculated back then to be 2000 hours.  Woody wrote an article about the same time that appeared in Motor Trend and other publications that discussed how to build a Woodill Wildfire in just 14 hours.  I’m not sure what kind of magic they had back then, but on a recent car restoration, the brakes alone took about 12-15 hours:  lines, shoes, cylinders, master, etc.  I guess they were very optimistic back then 🙂 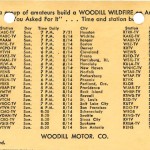 So the challenge was for Woodill, Victress, Glasspar and other fiberglass sports car companies to convince and demonstrate the ease and quickness of building your own sports car.  I did some quick calculations on converting 1 person at 2000 hours to more people at different hour intervals leading up to the legendary “4 hour build”.  Here’s my results of what it would take to complete 1 car in man hours – assuming the “build” would take an average of 2000 for a single car:

So by my gentle calculations, there should be 512 people assembling this car in this video – to hit the 4 hour mark.  Should be fun.  Let’s enjoy the movie – it’s just 6 minutes long.  And be sure to count the people helping – there should be more than 500 of them on this video (and this is without a lunch break!):

Thanks to Ted Griffin for allowing us to share some of his original Woodill Wildfire memorabilia.  Ted is one of the original owners and builders of a Wildfire – and he still has his beautiful Woodill Wildfire too.  He and his son Greg enthusiastically support all of these cars, and lent their approval to share these items here.   And….don’t forget…let us know your comments on our Forgotten Fiberglass Forums about the video. 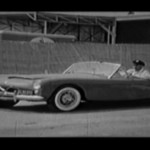 Art Baker Introducing Segment on Building a Woodill Wildfire in 1955 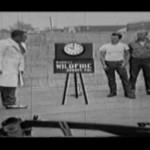 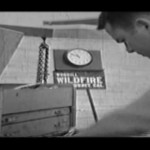 Fitting the Body to the Frame – Is the Entire Build Possible in Just 4 Hours???

The Car’s Nearly Done After Just 4 Hours – and They Took a 45 Minute Lunch Break Too!!! 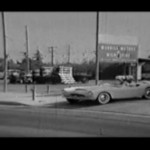 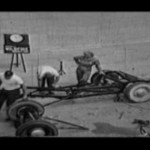 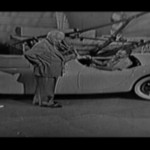 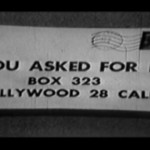 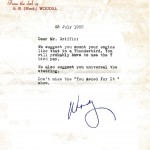 Personal Communication from Woody Woodill to Ted Griffin From 1955 – Don’t Miss That Show!!! (from Ted and Greg Griffin Collection) 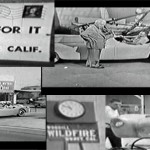