This is the most promising to date of the several electric cars being engineered in various cities.  George Lippincott, the founder and president of Nic-L-Silver, hopes to have ten cars a day rolling off the assembly line now being tooled.  As quickly as possible, according to Lippincott, the Pioneer will be produced at a rate of one hundred a day, national distribution being the eventual intention….
.

The story of the Alken sports cars first rears its head in the November, 1958 issue of Road & Track magazine – and in an impressive way too.  Road & Track not just wrote an article on it – they did an official Road Test, and one we’ll share here in a future story at Forgotten Fiberglass.   Certainly people who saw the design and build of this car were impressed.   And so was George Lippincott of the Nik-L-Silver battery.

Fast forward to January, 1960 which is when today’s article was published.  Nik-L-Silver had already made the decision to use the Alken body and VW chassis as the basis of his new electric car – one that was being well-received by the industry.  Let’s see what Sports Cars Illustrated had to share about this latest iteration of the Alken – Nic L Silver’s “Pioneer” electric car. 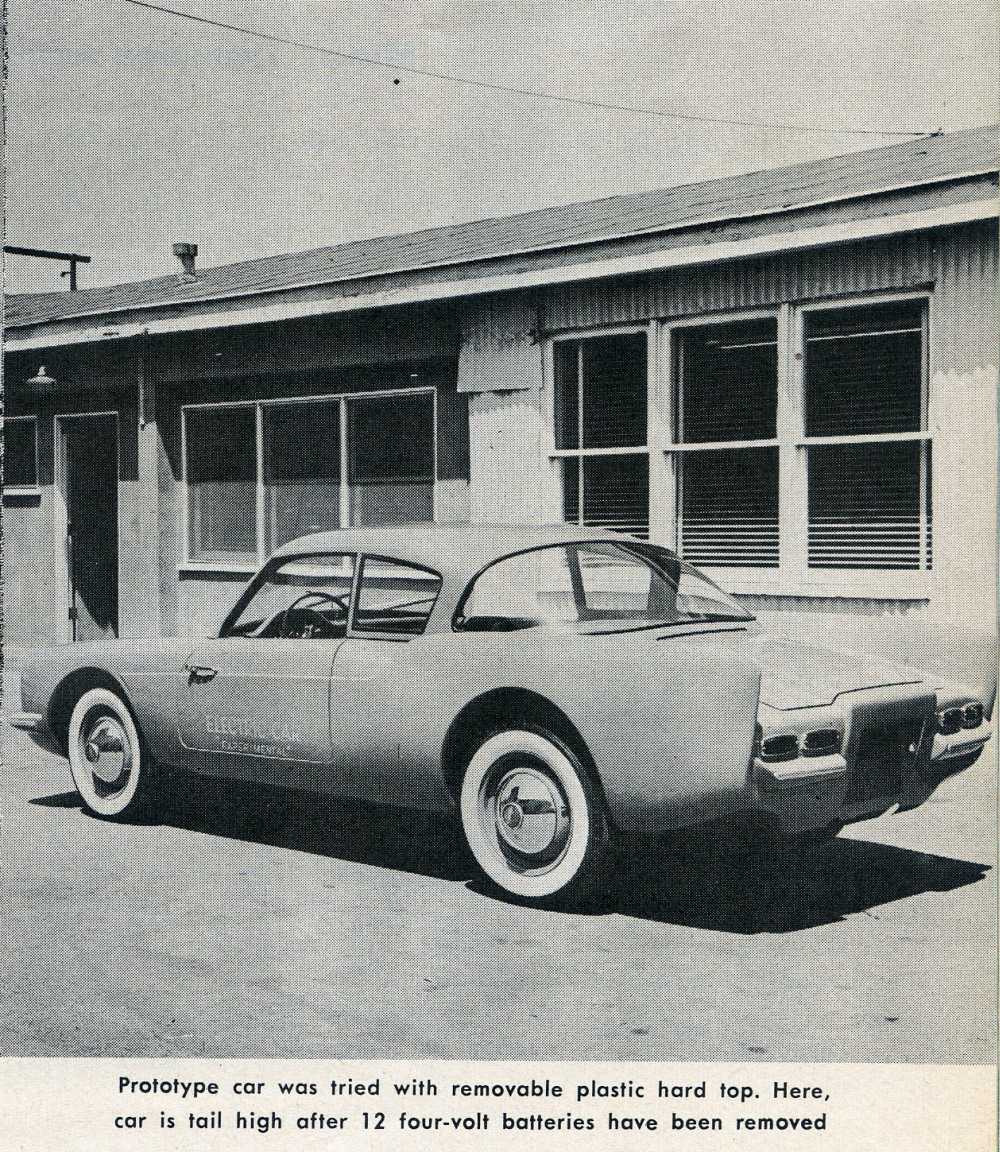 We recently drove a car that, when it reaches production, could take the second-car market by storm.  The most unusual automobile of conventional configuration to be engineered in this country in many years, it will be manufactured by the Nic-L-Silver Battery Company of Santa Ana, California.

There will be no gasoline or air pollution problems with the “Pioneer”, as it is called, for this is the most promising to date of the several electric cars being engineered in various cities.  Tests thus far indicate operating costs will be under 1/3 cent per mile.

The two-seater body is of laminated fiberglass by Alken with a removable hardtop that attached by four thumb screws.  Behind the individual bucket seats, which move far enough back to allow a six-footer reasonable comfort, are twelve 4-volt series-wired batteries of special design made by Nic-L-Silver.  Concealed beneath rugged flooring which serves as luggage space, these lead-acid batteries have two cells each with 31 plates per cell and a capacity of eight hours at 235 ampere hours.

A box section steel frame of simple but rugged construction carries the full torsion bar suspension which closely resembles the Volkswagen layout.  Two electric motors, each delivering eight shaft horsepower are used; there is one to each rear wheel, the latter being driven by a rugged sprocket and chain system that is geared down to conserve power.

Top speed is 50 miles an hour but acceleration to this maximum is amazingly brisk, quicker than that of the average small imported car.  Driving is simple and most enjoyable.  The seats are as comfortable as those in most small sports cars.  In fact one sits very low with the legs outstretched.  There are two pedals, one being the usual brake pedal which operates a conventional hydraulic system with expanding shoe brakes with one slave cylinder in each wheel.

The other pedal is a wide one for acceleration with an operation best described as two-stage.  For normal driving at city traffic speeds, 25 to 35 miles an hour, the accelerator is depressed less than half way and the drain on the batteries is 24 volts at the most.  For full acceleration and speeds approaching the maximum, the pedal is depressed past the half way mark, whereupon the voltage used approaches or attains the maximum of 48 volts.

The steering system is also conventional recirculating ball type with very easy movement of the wheel even at rest requiring three turns from lock to lock.  As the wheelbase is just 95 inches, the Pioneer will turn on a dime; parking will be a breeze with space to spare due to the overall length of 157 inches.

The overall width is about 60 inches which should qualify this little runabout for reduced parking rates in many public lots.  George Lippincott, the founder and president of Nic-L-Silver, hopes to have ten cars a day rolling off the assembly line now being tooled.  Power companies, postal authorities, and dealers throughout the West Coast states are interested in obtaining the first models.  As quickly as possible, according to Lippincott, the Pioneer will be produced at a rate of one hundred a day, national distribution being the eventual intention.  The Pioneer has been tested in San Francisco where it devoured the city’s famed steep hills in front of utility officials and interested dealers. 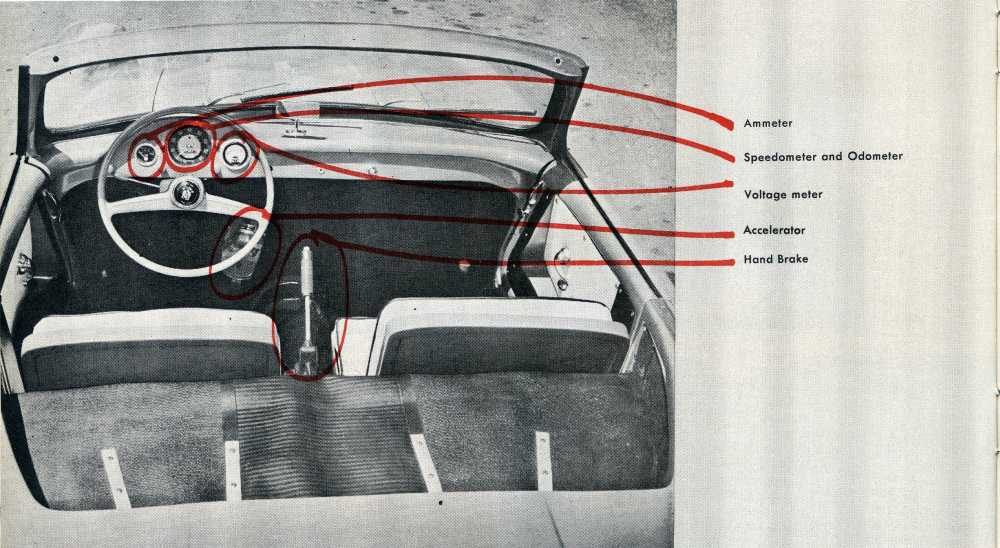 The weight of the Pioneer, with the hardtop in place, is 1800 pounds of which over 600 are accounted for by the batteries.  The fiberglass body weighs less than 300 pounds. During our demonstration drive around the outskirts of Santa Ana we experienced the curious glances of motorists in assorted large vehicles.  While waiting for traffic lights to change, the complete lack of motor noise is, at first, somewhat ghostly.  The two electric motors do not run when the foot is taken off the accelerator.

The latter is, in effect, a switch; only when the pedal is pushed do the motors operate.  Forward and reverse are controlled by a panel of solenoids and switches actuated by a small toggle switch on the dashboard.  The latter contains a conventional speedometer and one other instrument showing the voltage being drawn.

The range of operation varies from 100 to 150 miles according to Lippincott, depending on whether one pushes the performance toward the maximum or is content to stay with the majority of traffic.  Not intended to be a touring car with conventional range, the Pioneer is aimed at families requiring the utility of a second car but also demanding economy.

A battery charger will be standard equipment in each Pioneer.  Recharging will take a maximum of eight hours and, despite rumors to the contrary, is from a regular 110 volt current outlet.  Utility companies have indicated an interest in providing such outlets in selected public parking lots.

In most areas a full charge is not likely to cost more than the fourth part of a dollar and where electricity is relatively low in cost, less than 20 cents.  If in the process of going to and from work on parkways the driver stepped on it and obtained only 80 or 90 miles total range, he would still have extremely low cost transportation.

The ride is good, telescopic shock absorbers being used.  The parking brake will appeal to those who like sports cars: a lever between the seats.  The inside panels of the doors are of interesting design with the armrest built in. In addition to the space above the batteries and behind the seats, other luggage can be stored beneath the front hood.  The pace behind the electric motors will be occupied by the battery charger.  Maintenance will take little time.

Checking the level of the batteries and taking a specific gravity reading occasionally (1.265 is normal) and greasing the chassis is all that is necessary.  The latter has a total of three greasing points. Next to the low cost of operation in importance is the price of the car, which, in convertible form, will be $1995 F.O.B. Santa Ana according to Mr. Lippincott.  The batteries will have a useful life of three years and, at that time, will cost less than $500 to replace.

Other than the batteries, there is little to worry about outside of occasional motor brushes.  The Pioneer will not be the only electric car but it will probably be the first. 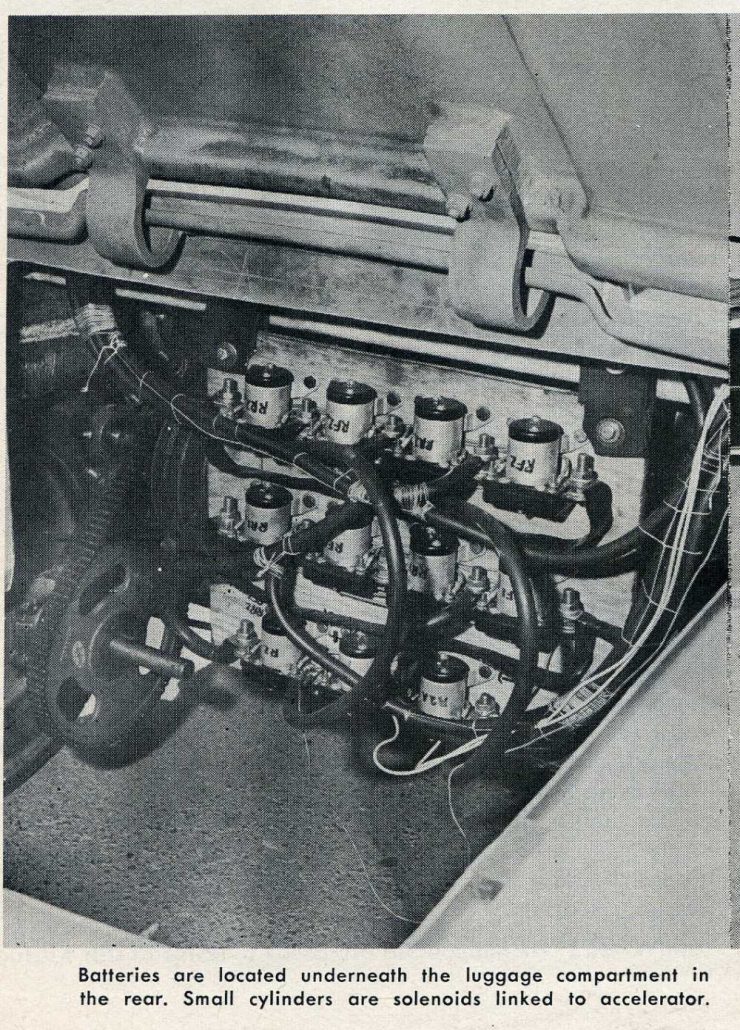 Through the research efforts of key members of the Alken Owner’s Group (AOG) – Javier Munoz and Jeff Lipnichan – two of the three Pioneer Electric Alkens have been found.  One of these owned by Javier is shown below – most likely the one that appeared in today’s article. 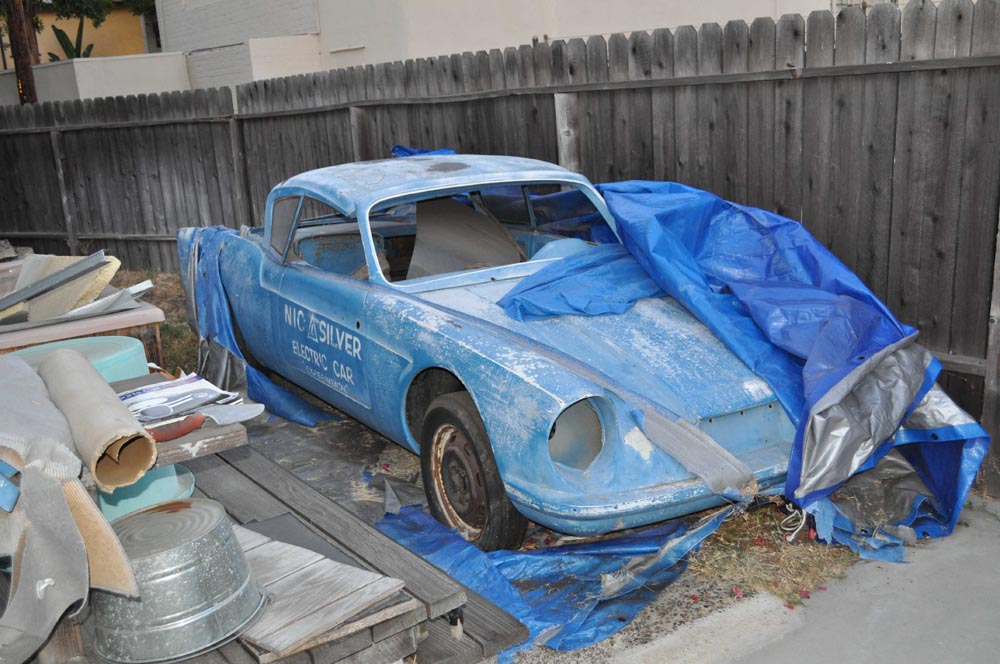 As for the other missing Pioneer electric?  Well that turns out to be a one-off car designed and built by Victress – still missing to this day.  And it could be found by one of the Forgotten Fiberglass Aficionados out there.  More about that special lost car – a Victress original – here in a future story at Forgotten Fiberglass. 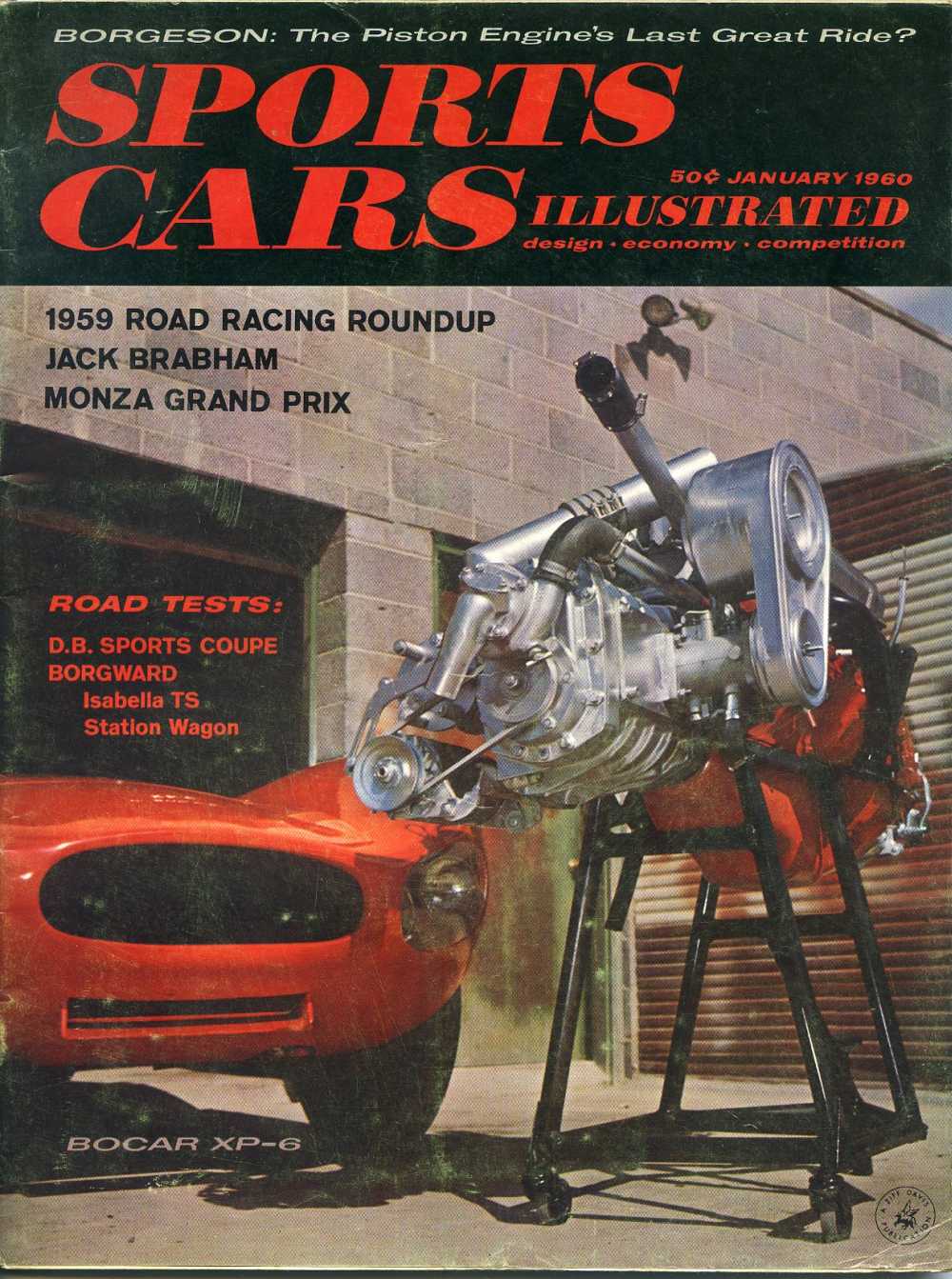 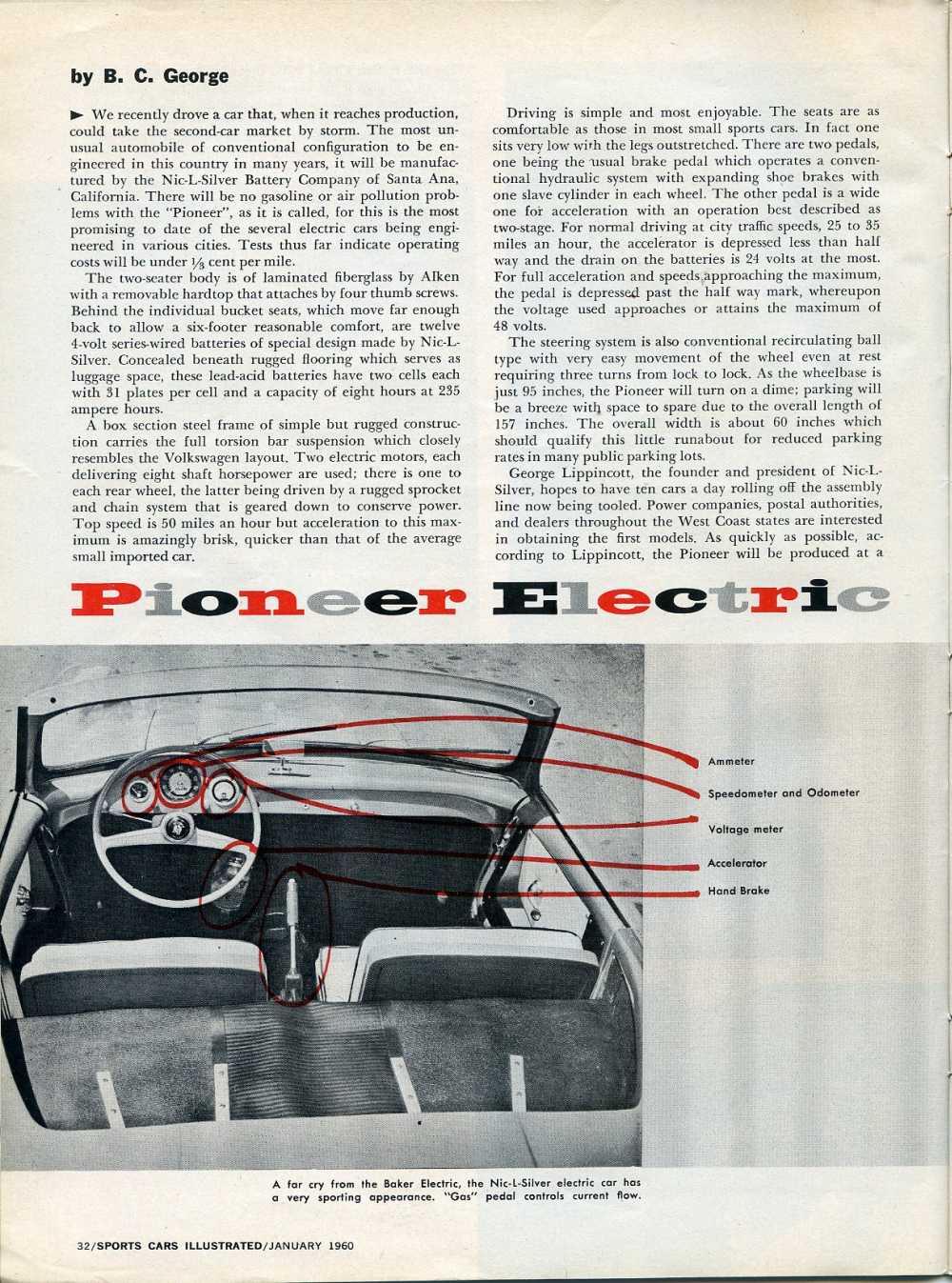 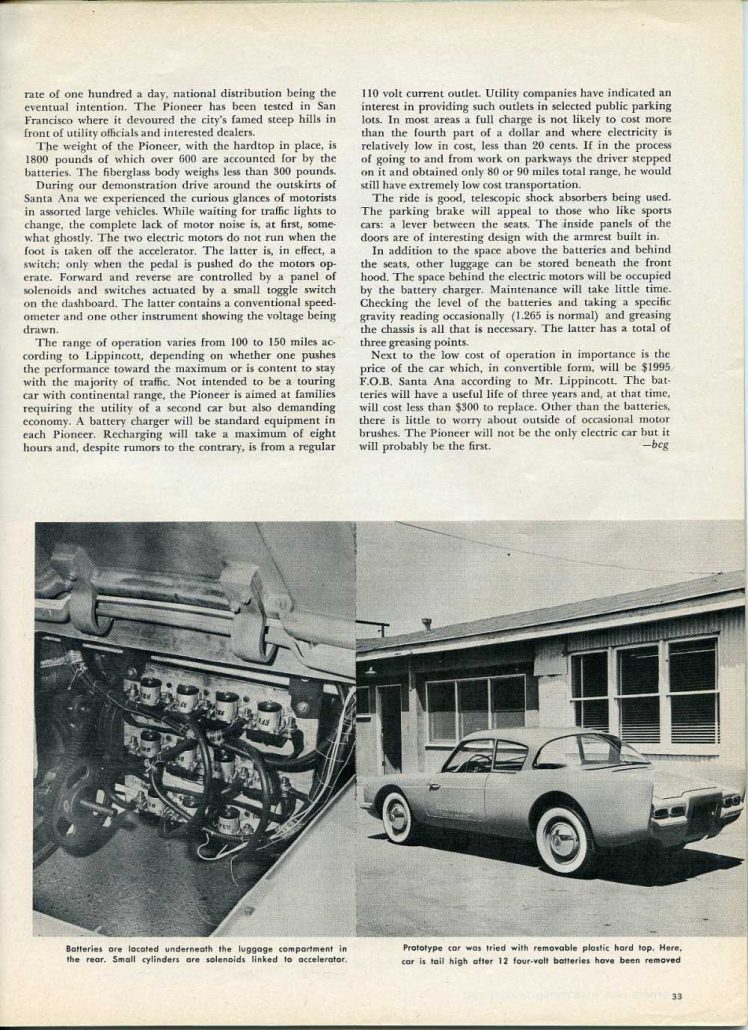