As we continue to dig into the magazines of the 1950s and 1960s searching for cars, stories, and information about the era where anything seemed possible, we find photos and articles that show no end to the creativity and excellence in designing and building your own car. Today’s story is one in a series that we’ll be writing about John Osborn and his custom built sports cars.

The Initial “Find” – A Car For Sale

Our first glimpse of this car came from readers who alerted us – more than once – to an ad that appeared in Hot Rod Magazine in July, 1960. You can see this ad below – a nicely built fiberglass sports car – futuristic in design:

The ad showed what appeared to be an original car built from fiberglass on a 100 inch wheelbase. This is the size of most sports cars back then such as Victress, Glasspar, Wildfire, and others so we knew it was built from speed. The car was being sold by John Osborn of Livonia, Michigan and that’s all we knew at the time.

Good friend Sondre Kvipt covered this car extensively on his website, and you can see what he found by clicking on the link below:

And one of the neat things Sondre found was a photo of the car taken at a show in Detroit: 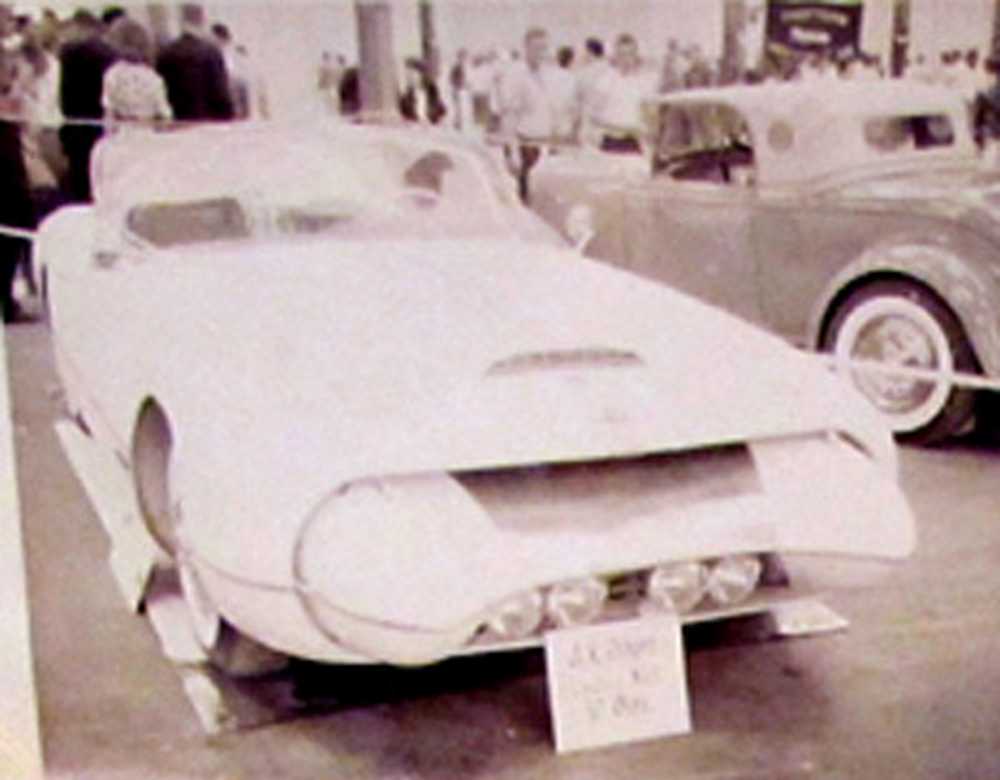 The Kustomrama site is great because Sondre also lists known articles that each car appeared in. I’ve shared these below which include Popular Mechanics January, 1961; Rodding and Re-Styling in January, 1961, and the 1961 Trend Book by Jim Potter titled “Restyle Your Car” – recently covered here at Forgotten Fiberglass.

Let’s look at each of these magazine appearances. 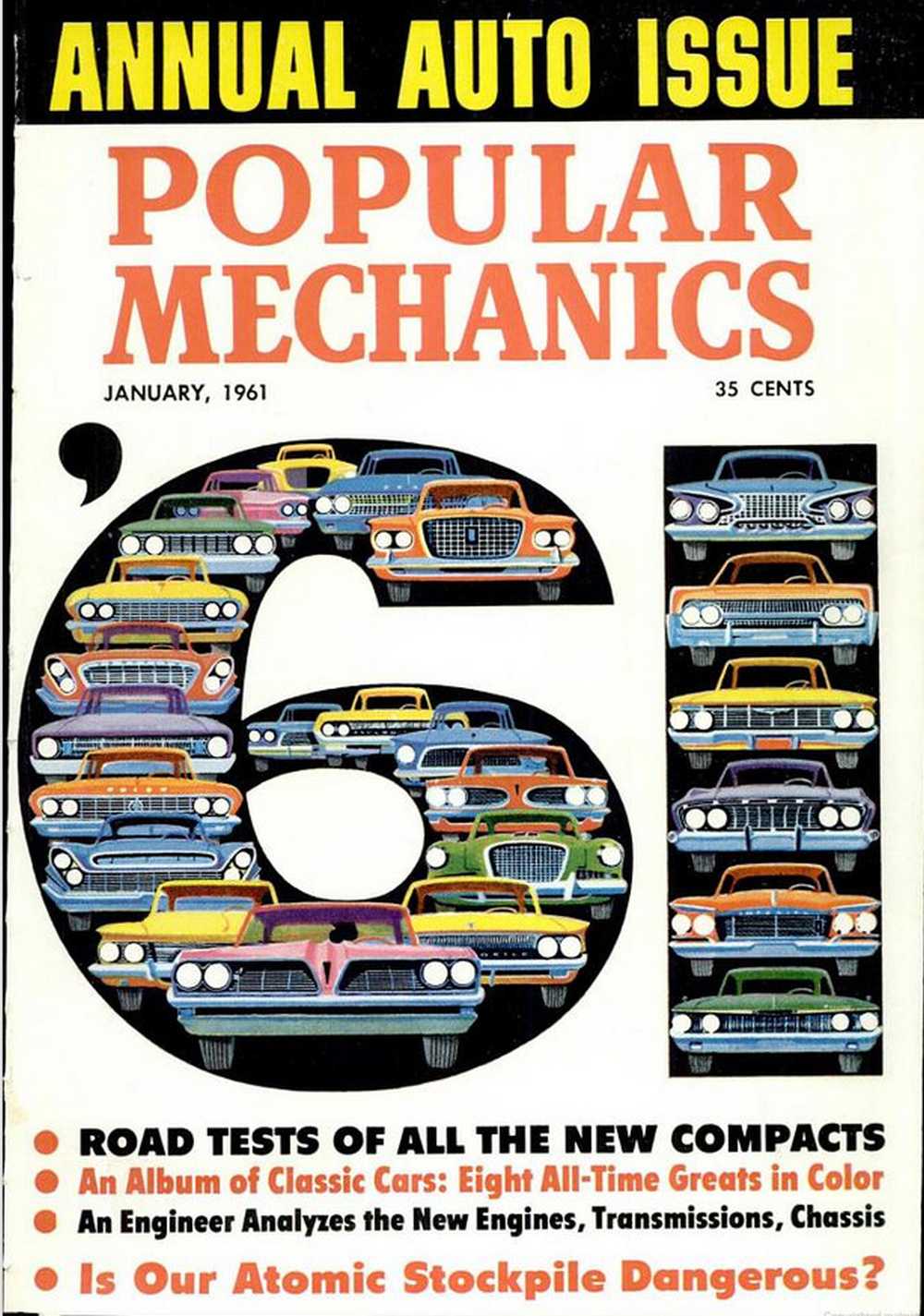 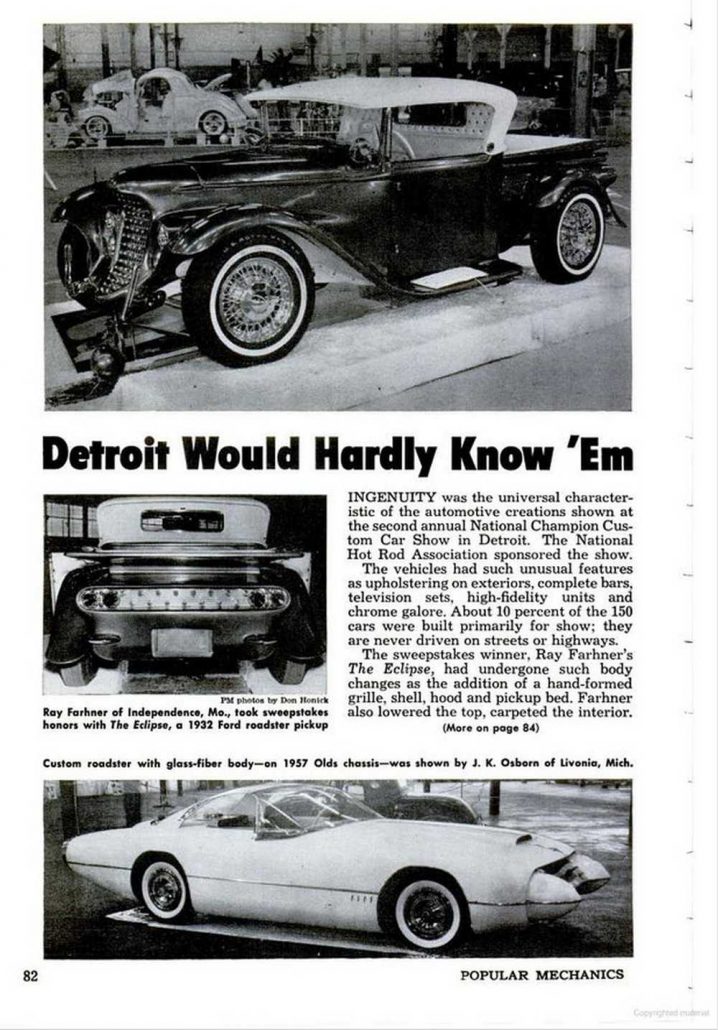 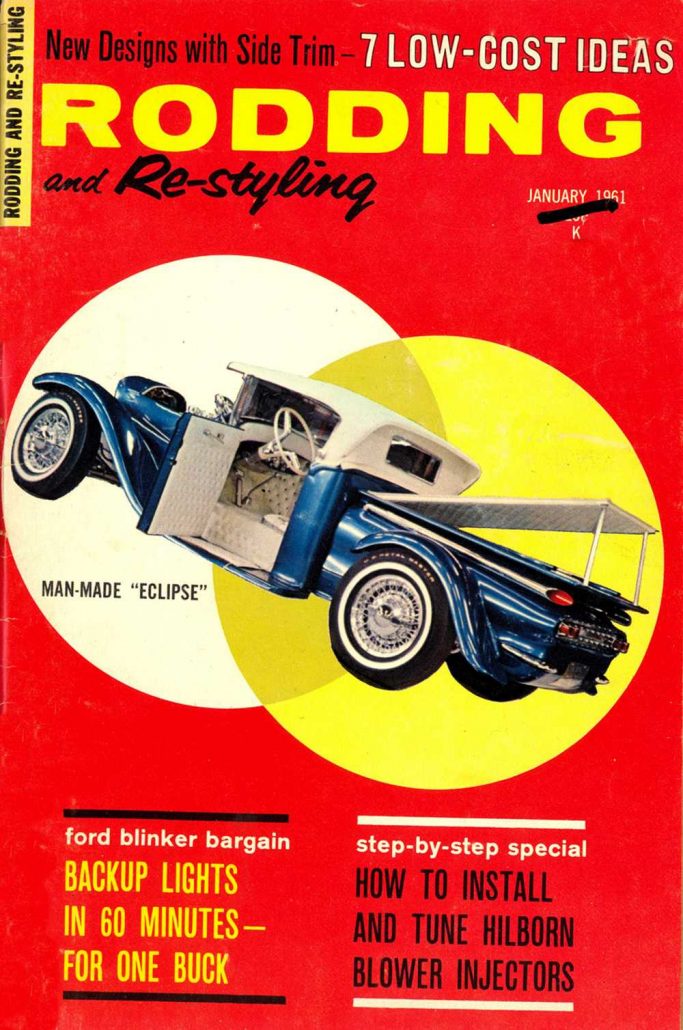 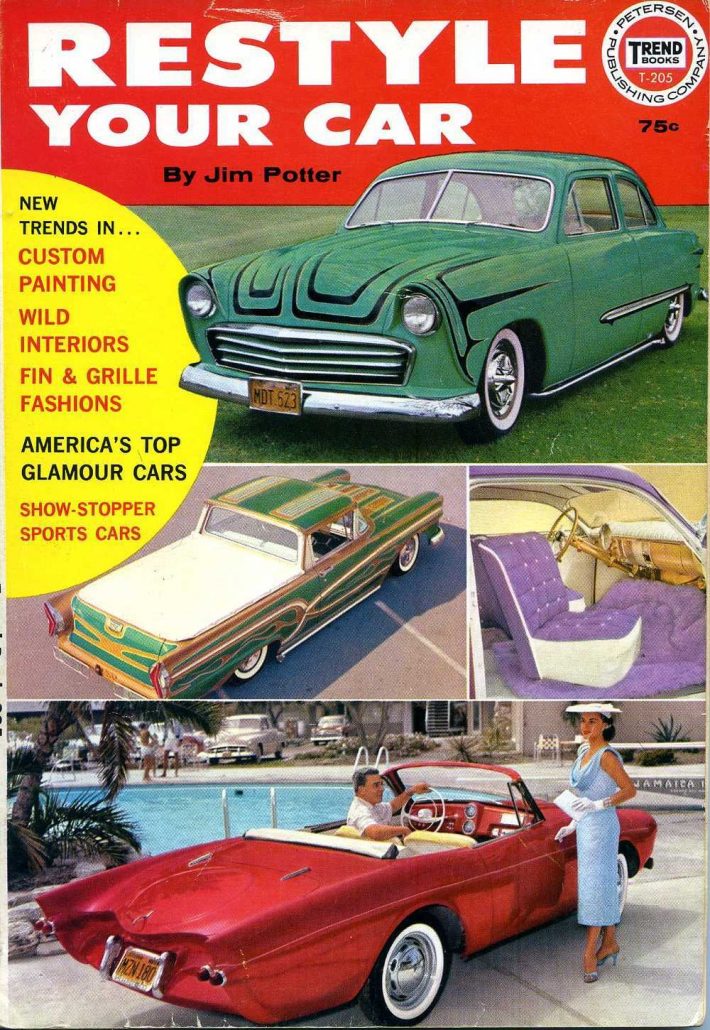 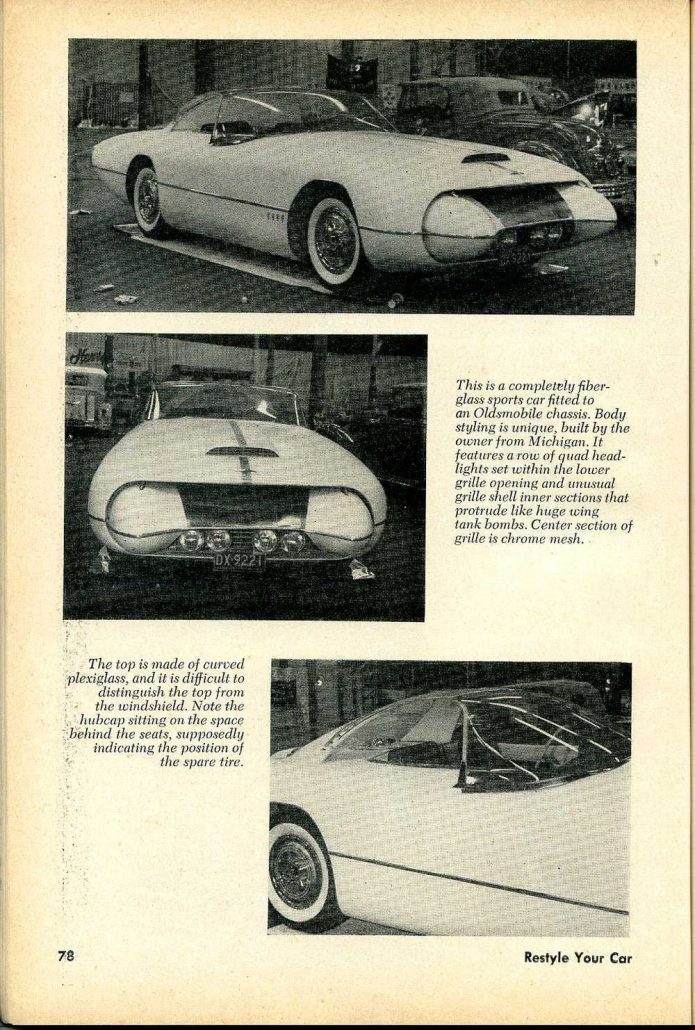 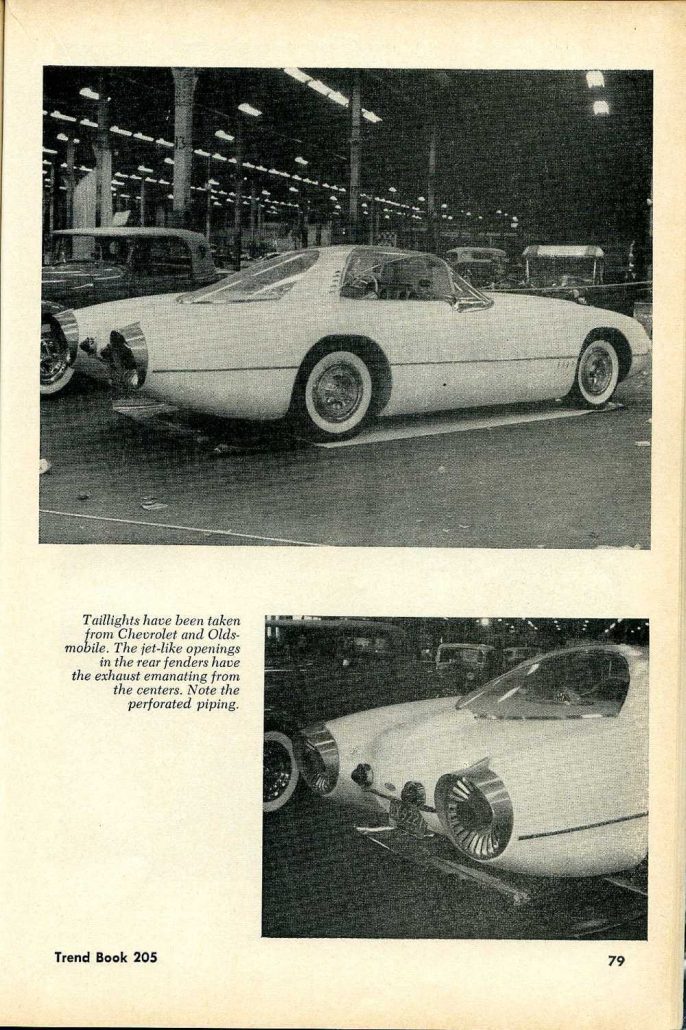 It’s the Trend Book that gives us the most detail on the car – two dedicated pages with five photos and detailed captions. Here’s what those captions shared about John Osborn’s Custom Sports Car:

Caption 1: This is a completely fiberglass sports car fitted to an Oldsmobile chassis. Body styling is unique, built by the owner from Michigan. It features a row of quad headlights set within the lower grille opening and unusual grille shell inner sections that protrude like huge wing tank bombs. Center section of grille is chrome mesh.

Caption 2: The top is made of curved plexiglass and it is difficult to distinguish the top from the windshield. Note the hubcap sitting on the space behind the seats, supposedly indicating the position of the spare tire.

Caption 3: Taillights have been taken from Chevrolet and Oldsmobile. The jet-like openings in the rear fenders have the exhaust emanating from the centers. Note the perforated piping.

What a fantastically original design – futuristic in nature with design features that make it look more like a concept car than a sports car. I had to find out more – and you know me gang….I did.

Recently we located the family of John Osborn and we’ll be sharing the history of John, his cars, and family photos such as the one below of the car in today’s story here at Forgotten Fiberglass. 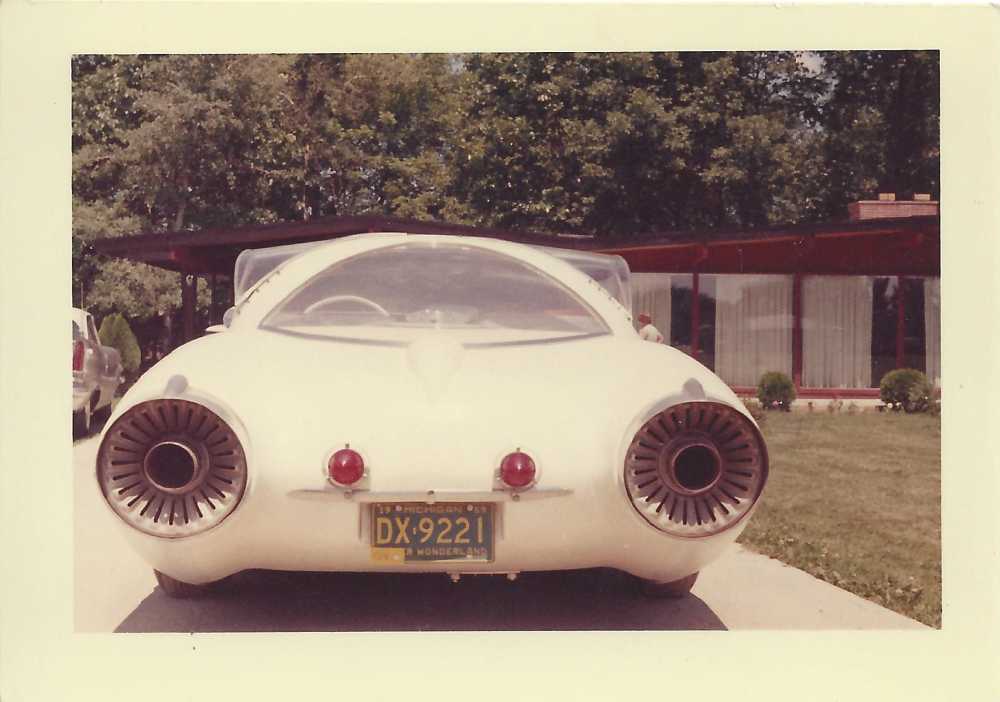