So when did each of the cars we study become available for sale to the public?  That’s a question we ask often here at Forgotten Fiberglass, and today’s story shows you how sometimes it’s fairly simple to determine.  That is….”show me the magazines!”

That’s an important question that we try and answer through research via magazines and dates shown on brochures and letters of interest.  Folklore – what we are often told via stories handed down from generation to generation – is often wrong.  Printed material at least has dates that can show the intent – at least – of the owner(s) of the company.

Today’s story is one of the first articles we’ve found so far on the debut of the Devin SS sports/race car.  It appears in the April, 1959 issue of Road & Track focusing on the chassis and not yet showing the body – a good indication that this is fairly early in the release of this car to the public.

Let’s see what Bill Devin had to share about his newest car to come to market – the Devin SS or Super Shillelagh. 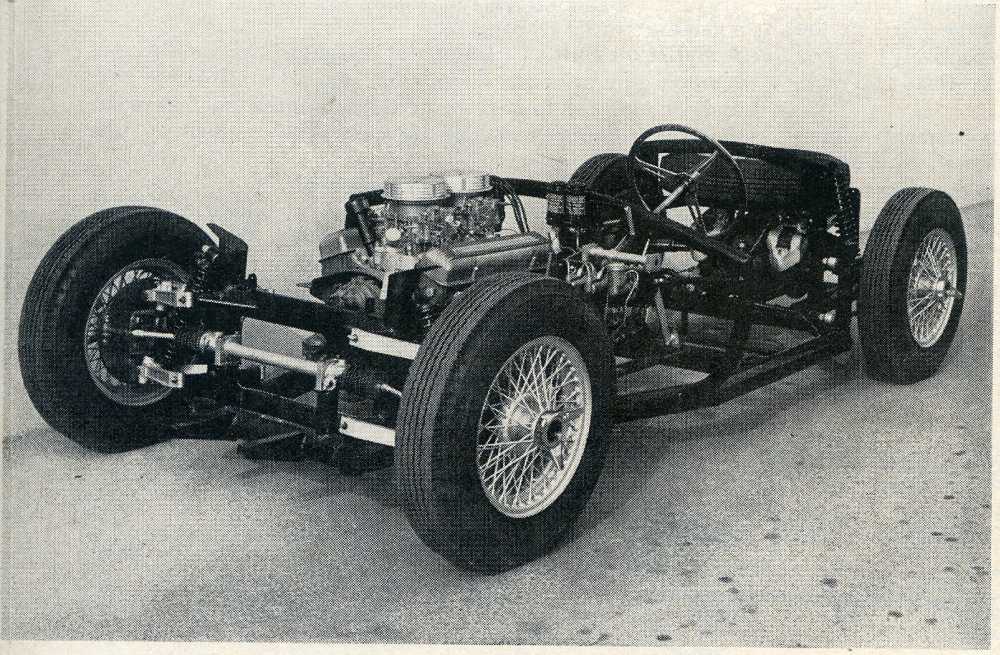 Did Your Chassis Come From Ireland?
Road & Track, April 1959

The name Devin has been associated with sports car racing (Crosley Special, Siata and Ferrari) on the West Coast for about seven years, and with sports car activities all over the world for the last several years as a constructor of fine fiberglass bodies.

Bill Devin, the dynamic personality behind the name, has long dreamed of marketing, an entire car under the Devin banner, rather than just body shells for someone else’s chassis.  It now looks as though his dream is coming true.  The chassis pictured on these pages is the result of many years of planning and months of negotiation with a firm in Belfast, Ireland (now contracted to Devin), which is fabricating the chassis to Devin’s specifications. 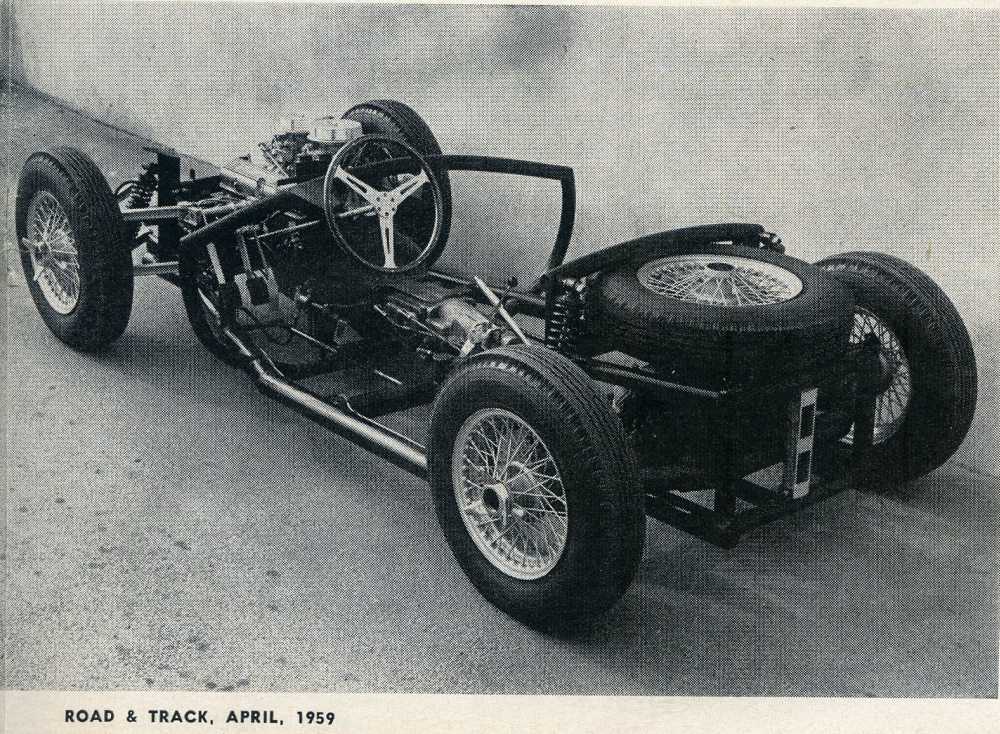 After the chassis arrives at the Devin plant in El Monte the Chevrolet engine and Corvette 4-speed transmission go in.  Then the driveshaft, instrument panel, electrical equipment and the body assembly are mounted.  The bodies will be similar to the Devin fiberglass bodies now familiar to Road & Track readers, but the design has been altered to give more depth for passenger comfort and luggage space in the rear.

Devin’s plans are to produce enough cars (150) to meet SCCA production requirements.  If this comes about, the GT Ferrari and Corvette owners can kiss that first-place cup goodbye.  Imagine, if you will, the performance of a near 2000 pound car (which the Devin is) with a 290 horsepower fuel injection Corvette engine.

The price – $5950 for a finished car – seems high until one considers the performance potential and the fact that the car will be completely equipped for street use with windshield, top, full upholstery and all the necessary accessories. 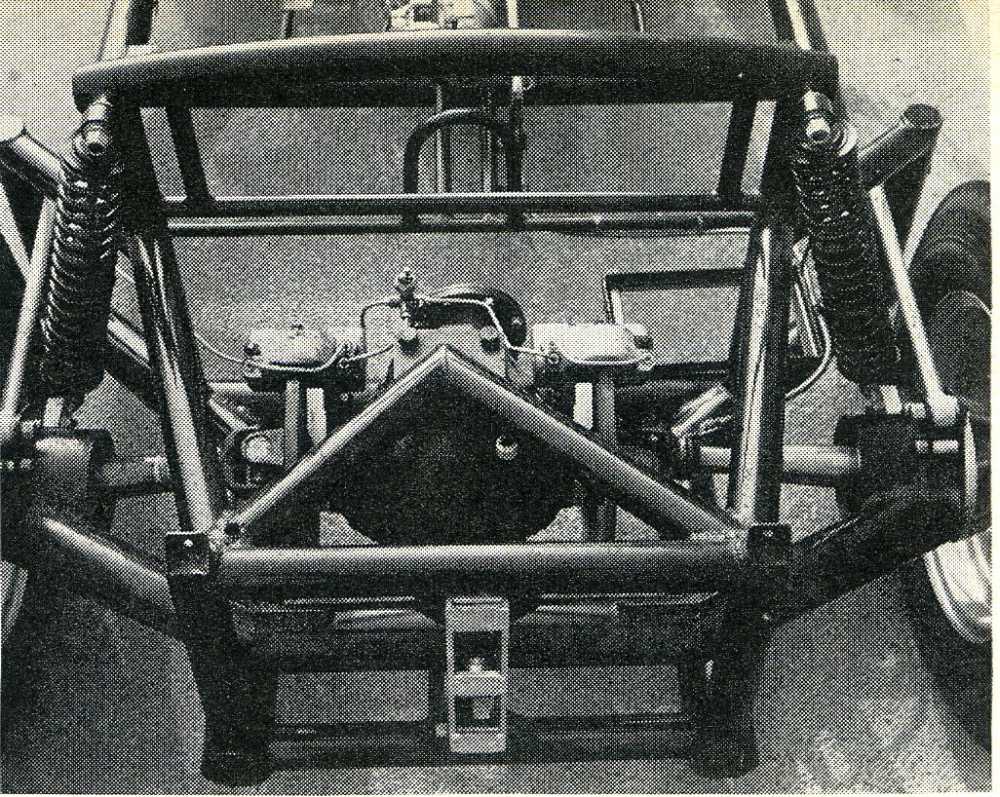 Caption 1: The de Dion tube is located laterally by a roller bearing attached to the tube; it rolls in a track bolted to the chassis.  Girling 12 inch disc brakes are used at the front along with equal-length, parallel A-arms.  The four coil springs/dampers are by Woodhead-Monroe; the rack and pinion is of British origin. 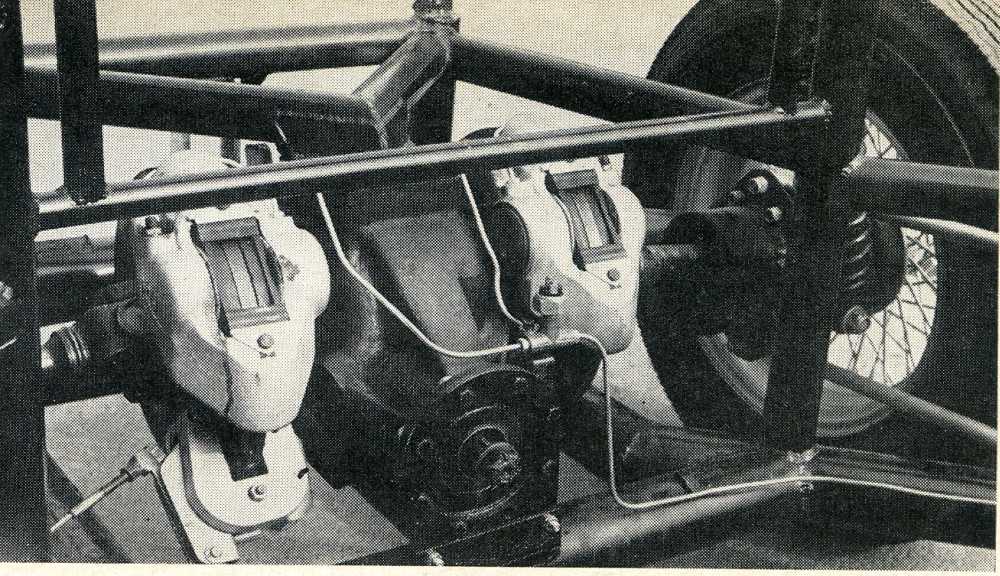 Caption 2:  Basic specifications of the Devin SS are: wheelbase 92 inches; tread 52 inches front /; 50 inches rear; steering turns lock to lock 2.5, turning circle 25 feet 8 inches.  The car can be purchased complee or in any of several stages of completion.  Other engine options are also available on special order. 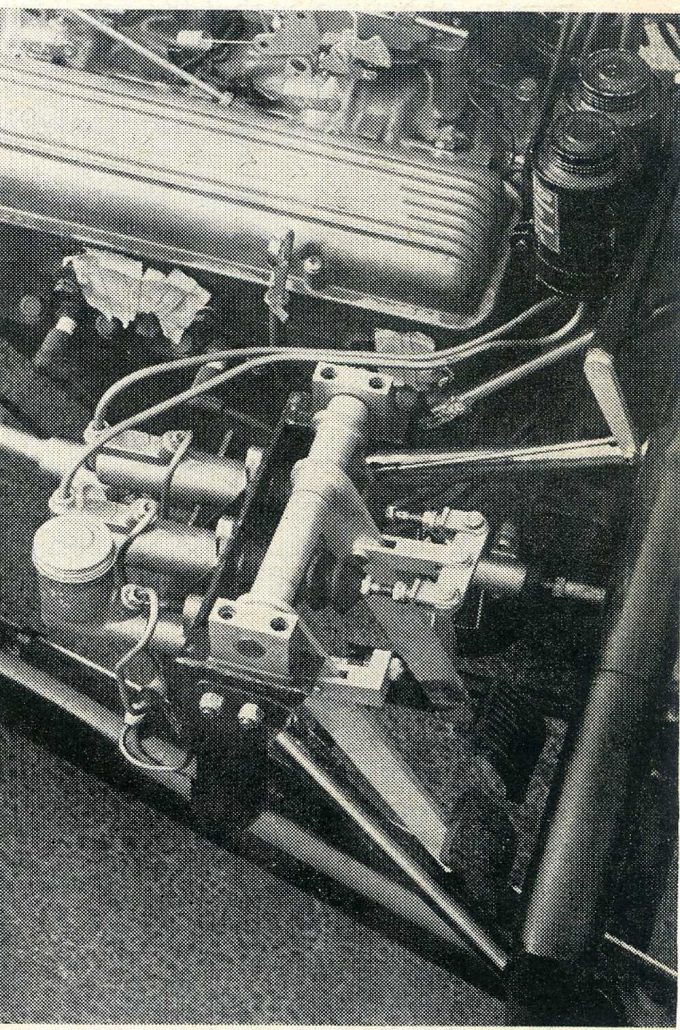 Caption 3: The Salisbury differential is mounted in the frame by the plate at the front and a structure of triangulated tubing at the top.  The rear brakes are 11 inch Girling discs and the hand-operated emergency brake works on the caliper just visible in the lower left corner of the top photo.  Construction of the chassis is very neat and workmanlike throughout, and no excuses need be offered on this score.  Both brakes and clutch are hydraulically operated through small Girling cylinders.  Two separate brake systems are used; one is for the front and one for the rear wheels, and both are actuated by one pedal.  Fuel tanks will fit in the lower outboard area of the rear body section, with luggage space behind the spare and between the tanks.  Racing steering wheel is standard, as is everything shown here. 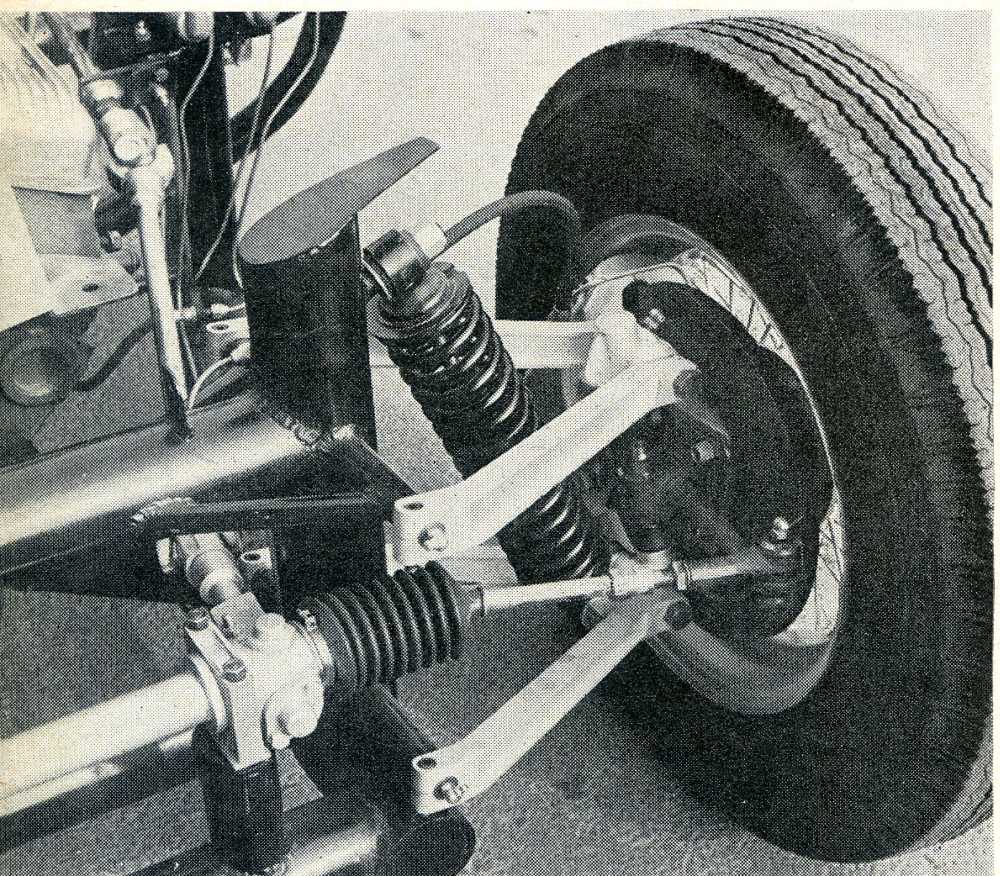 Devin also placed an ad in this issue of Road & Track as shown below.  Quite a comprehensive ad when you dig into the specifics – but…no cost information on the Devin SS.  That was sure to come soon, and we’re on the lookout for this first “Devin SS ad” here at Forgotten Fiberglass 🙂 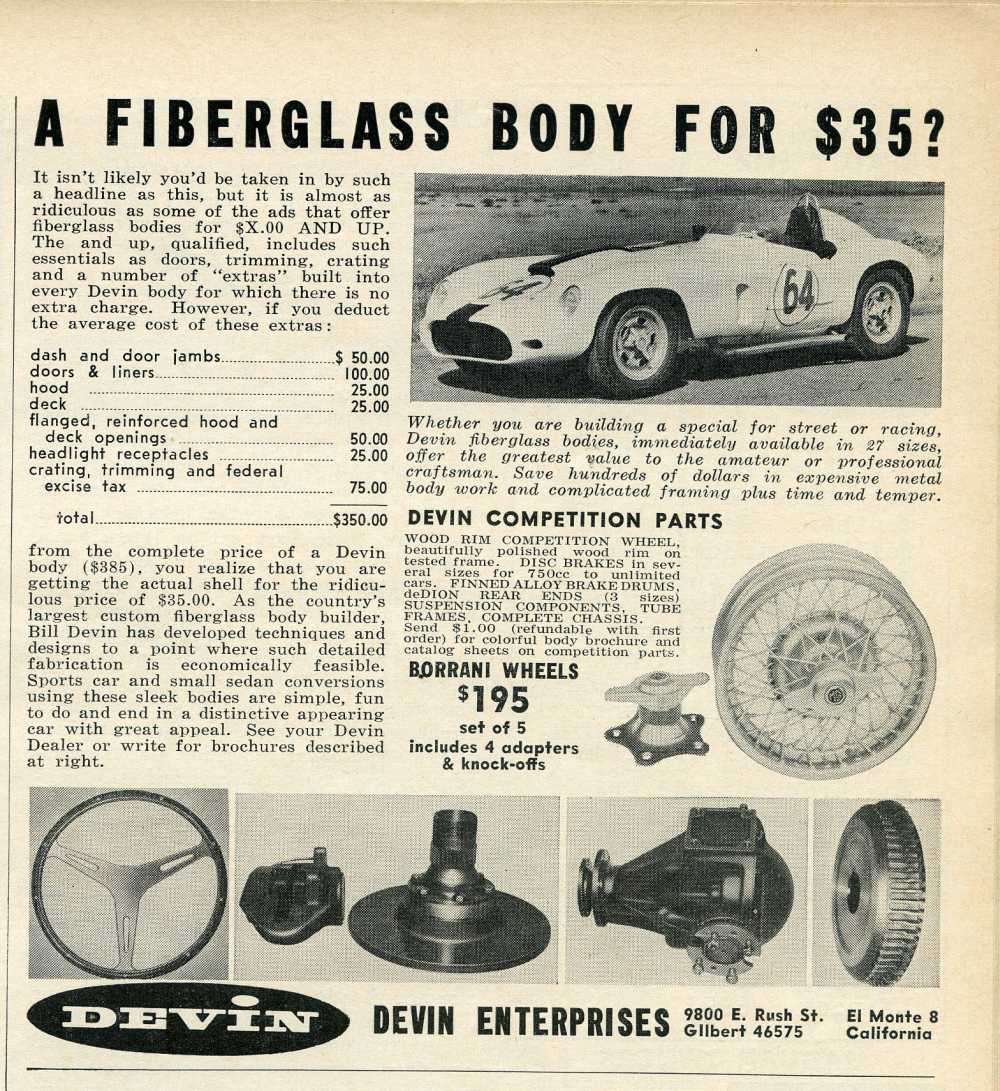 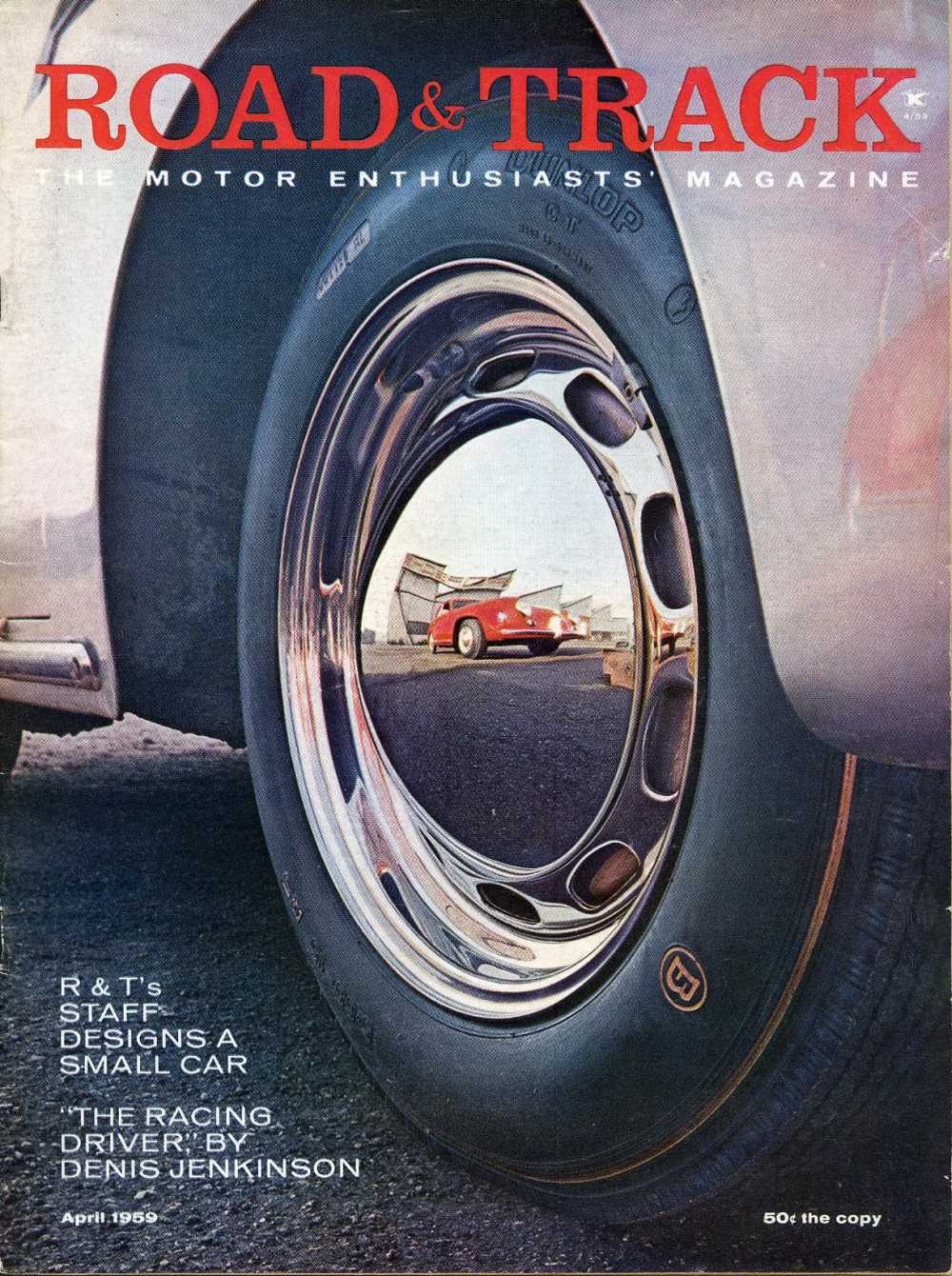 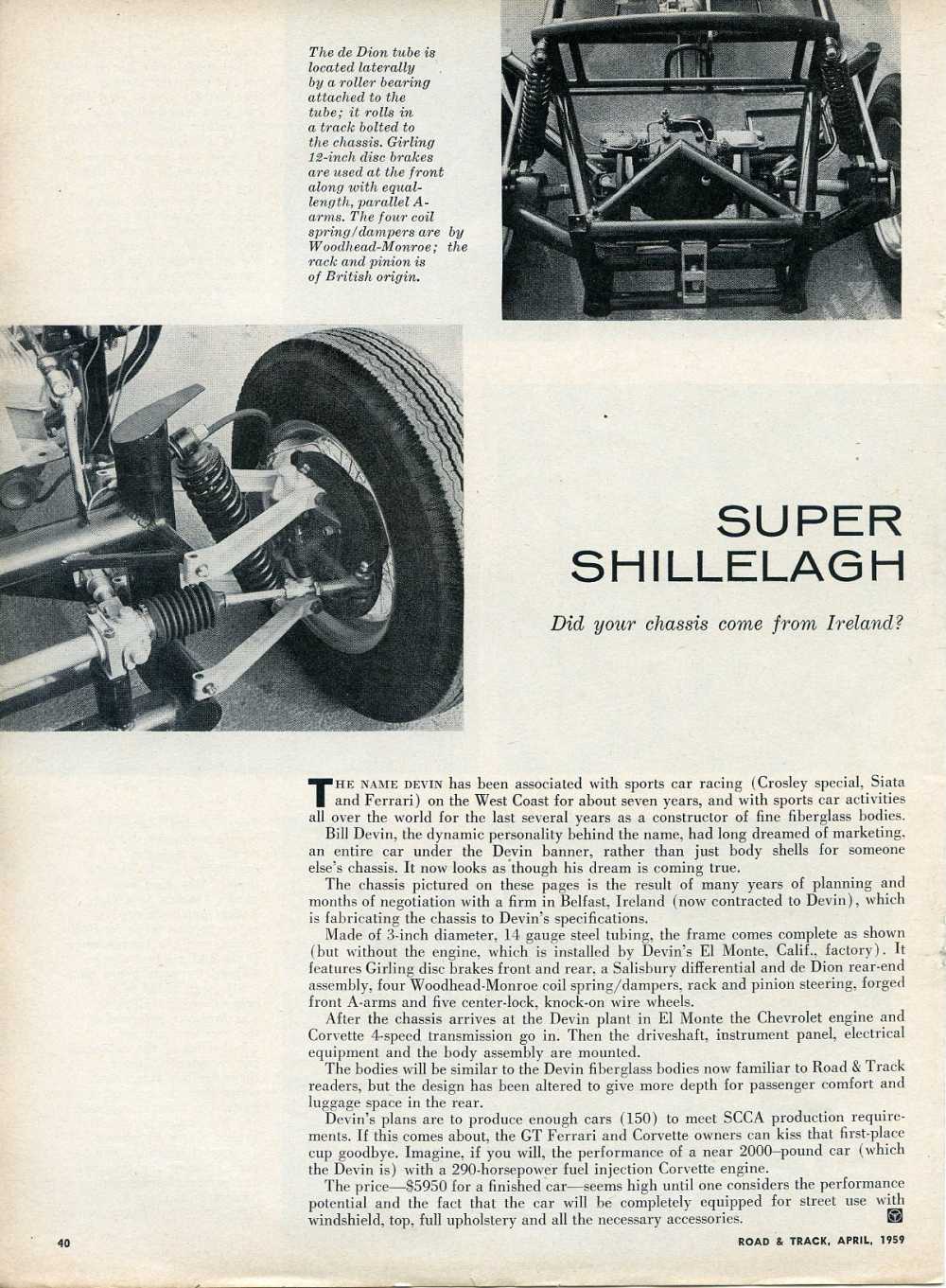 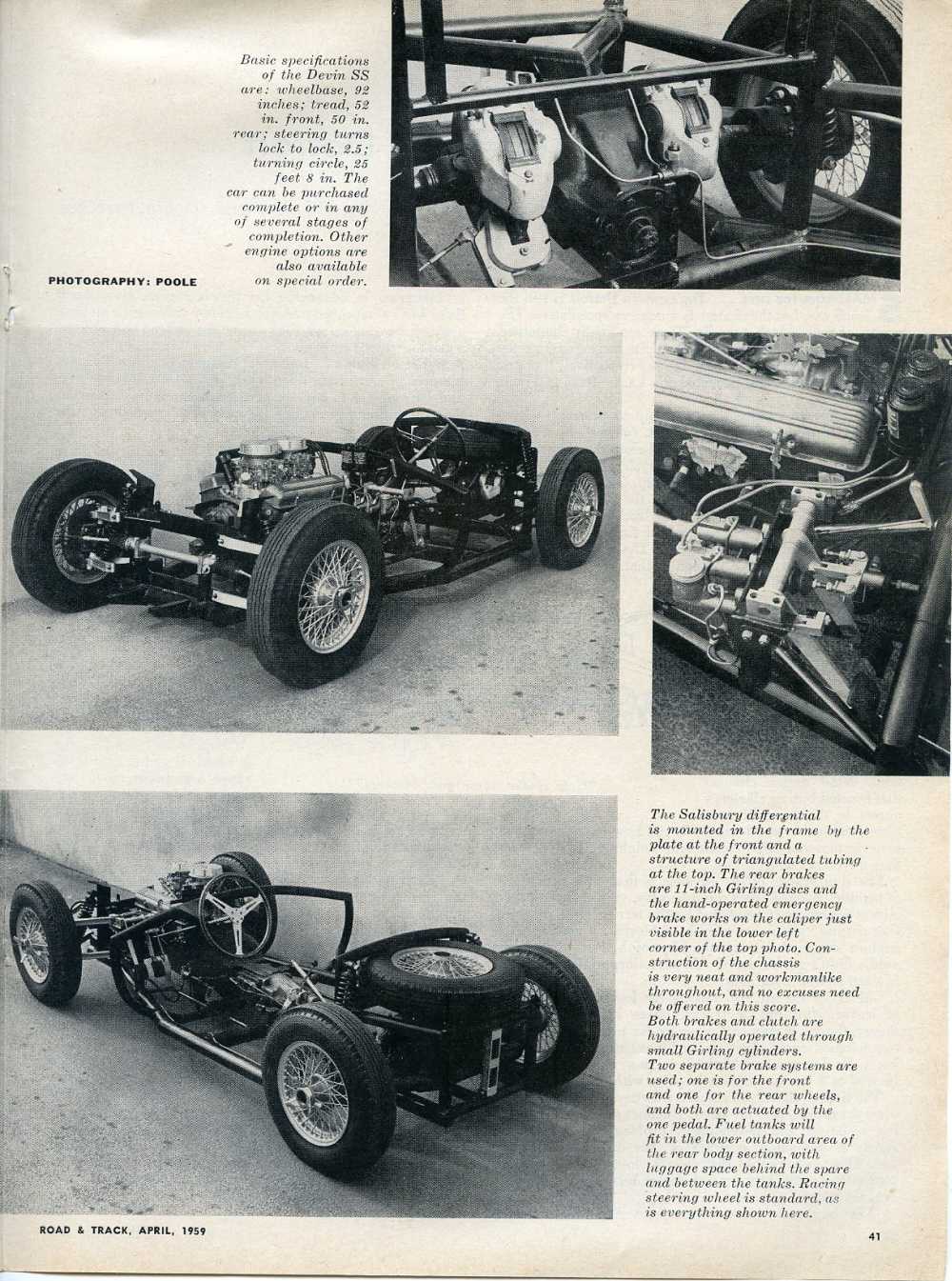