That’s what the crowd cheered when the locally designed and built “Chicagoan Sports Car” (also known as the Triplex and Ketcham Sports Car) debuted back in 1954 at the Chicago Auto Show in Chicago, Illinois.

Recently, David Greenles of “The Old Motor” found a wonderful publicity photo of the Chicagoan when it debuted at the Chicago Auto Show on March 13, 1954.  As it happened to be, thanks to the archives of Rick Ruth – automobile aficionado extraordinaire – we also have the corresponding article that featured the photo.  The article discussed that 12 “concept cars” were on display from various manufacturers – what a show this must have been.

And…research so far shows that the Chicago Auto Show in 1954 was the largest known historic gathering of concept car to occur in the 1950s – and….the “Chicagoan” was one of these cars on display for the public to review and critique.  In fact, until recently, the Chicagoan concept car was the only one missing from the 12 that appeared at the 1954 show.

“Yes, Virginia…” our favorite fiberglass cars of the 50s were featured at major Motorama’s and Sports Car/Custom Car shows across the nation – and they often received top billing as evidenced by the play the Chicagoan received by the media back in the day.  We tend to forget that back in the 50s, “fiberglass” was the “carbon-fiber of its day,” and cars being built out of it were a marvel for the public to see – let alone purchase.

So….with great thanks to both David Greenles and Rick Ruth, let’s have a look at the write up on the show and the car and see what they had to say. 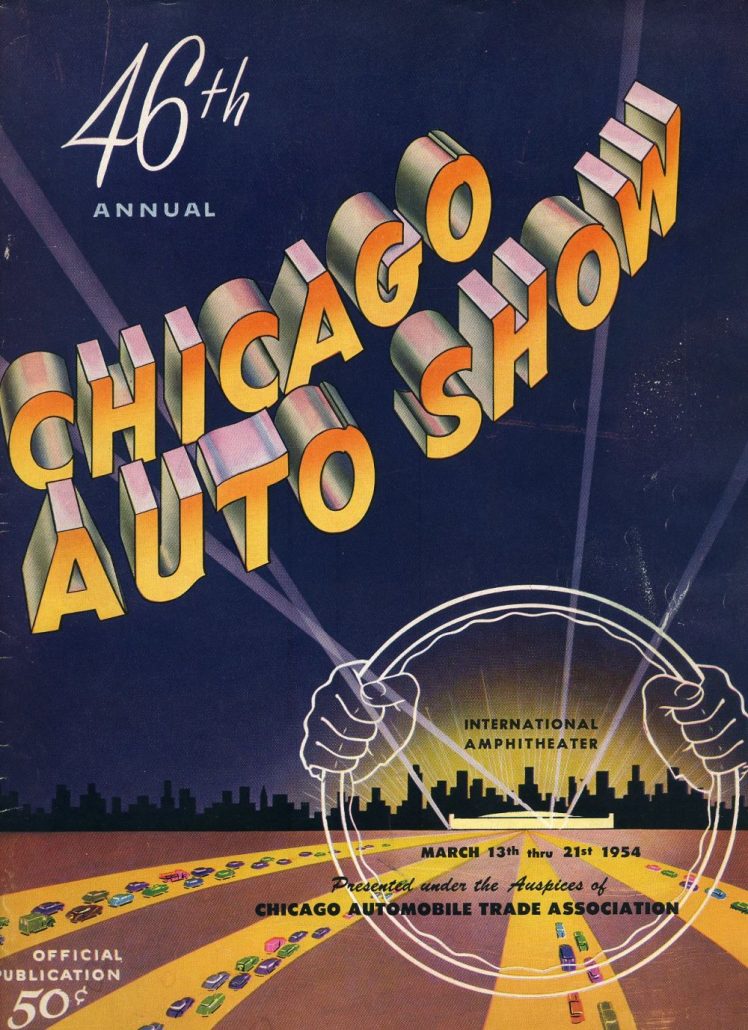 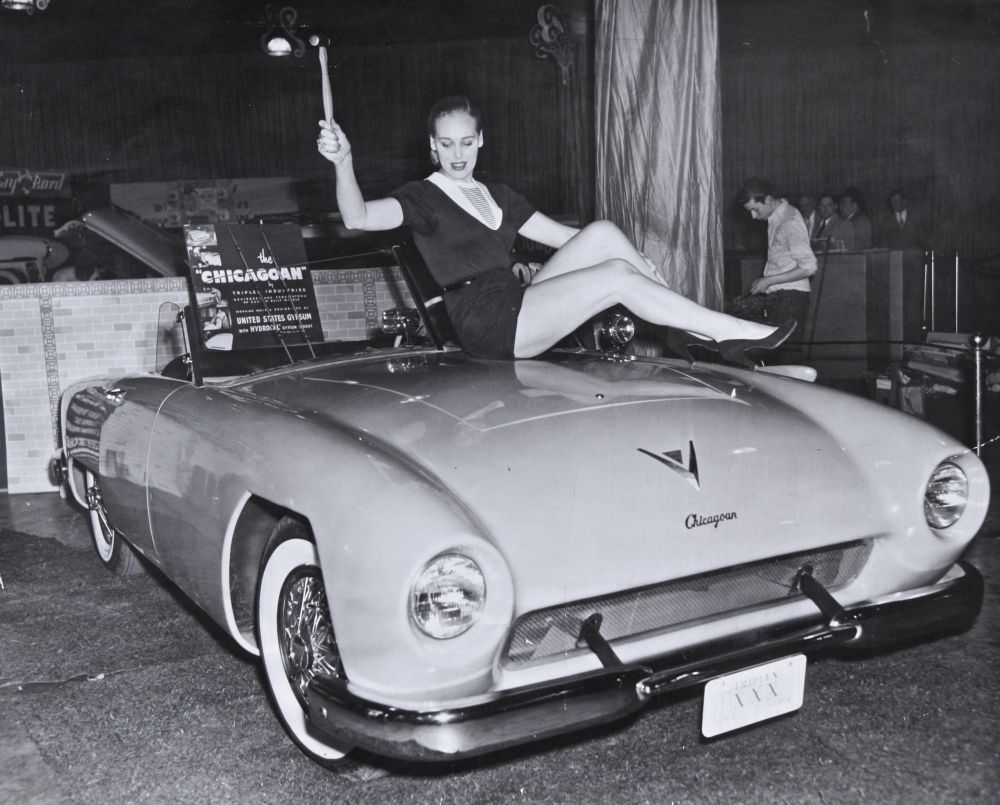 Caption From Article: Britt Karlsson uses a hammer provided by auto maker to prove plastic body of the locally made Triplex (the Chicagoan was made by the Triplex Company) sports car at International Amphitheater is not dentable (Sun-Times Photo).

Curiosity propelled crowds are wheeling through two floors of the International Amphitheatre to see the 19 makes of cars displayed at the Chicago Auto Show.  Twelve dream cars – experimental sport models not on sale – bring the people in, the exhibitors acknowledged, but whether tomorrow’s possibilities will sell the less radical though equally fancy cars available today remains to be determined.

The crowd Sunday reached 69,000, nearly equal to last year’s record of 71,000 for the big day of the show.  Attendance since the opening Friday evening brough a forecase from Edward L. Cleary, show manager, that more than 480,000 persons will be attracted before the exhibits close next Sunday night.

Teams of analysts are on hand to gauge public reaction to the low-slung, high-powered futuristic dream cars.  What they have learned so far is that sports-car club members arriving from all parts of the nation are offering blank checks to be filled in cash for models already for sale.

The buyer of regular models still is an enigma.  Cars are being sold on the floor at about the usual rate.  The these sales are not considered a barometer.  What counts is the customer who appears later in the dealer’s showroom as a result of what he sees and hears in the Amphitheatre. 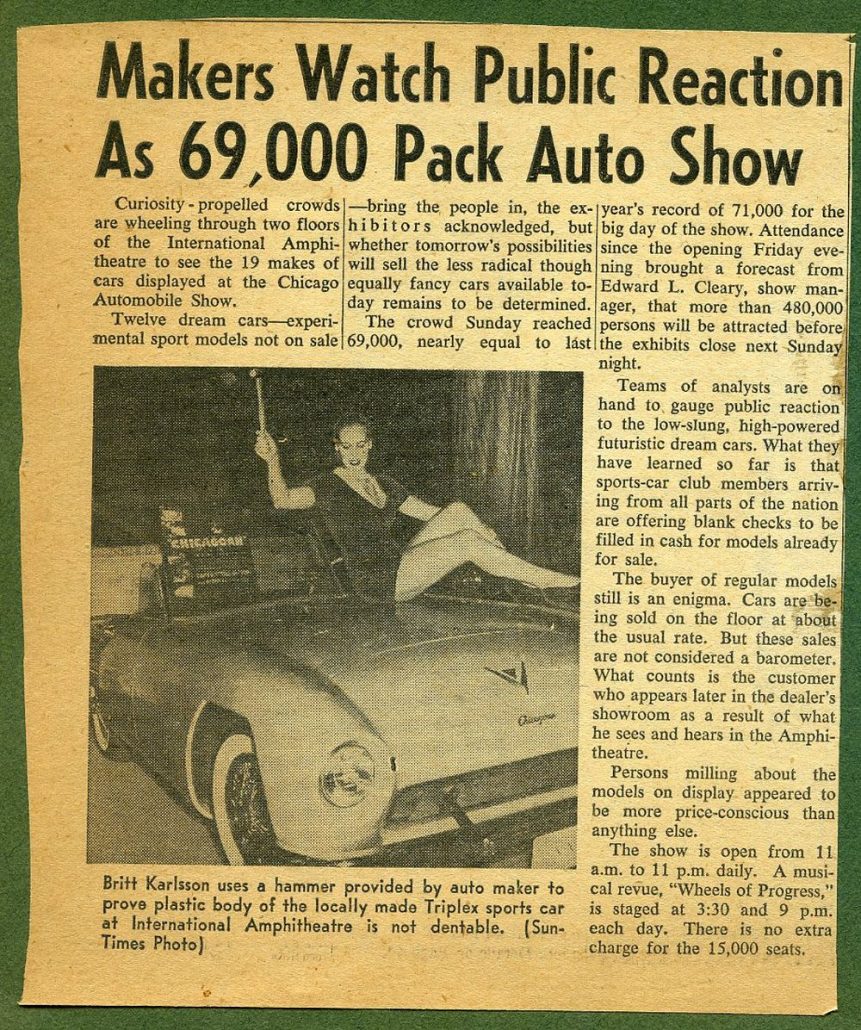 Thanks again to both David Greenles and Rick Ruth for sharing from their collections with us today.  And….for those of you wanting to get a glimpse of the Chicagoan Sports Car, come on down here to Tampa, Florida.  You only have a few weeks left to see it before the restoration begins.

At least this time, I have more than 90 days to complete the restoration which is all I left myself and team this year when we prepared our 1962 Shark roadster for the 2013 Amelia Island Concours d’Elegance (click here to see what I mean).