Looks like we’re going to finish up 2021 with a bang.  We’ll be attending 3 different concours in the next 3 months which is a new record for us, and we’d enjoy seeing you at any or all that you can attend.  Let’s talk about our first appearance next month in Chattanooga, Tennessee.

The Chattanooga Concours d’ elegance started several years ago and has evolved into a multi-day event including two vintage races, an auction by Mecum and a concours which occurs on the final day – Sunday October 17th, 2021.  I know that any of you that attend will enjoy the variety and quality of the event – and some of the Undiscovered Classics cars we’ll be featuring too.  At this time, we’ll be featuring at least three Undiscovered Classic cars, all which will be appearing in the “Postwar American Special Interest” class.  Let’s review as follows: 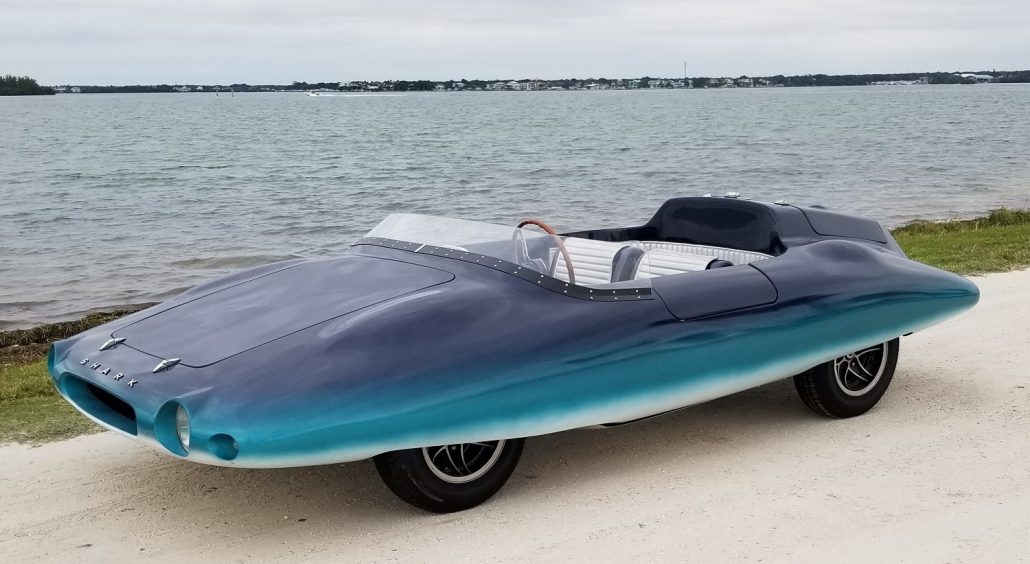 Here’s a short overview of the history of our 1962 Shark Roadster:

The Shark coupe and roadster are recognized as the most radical fiberglass car designs conceived in the 1960s that you could build yourself or buy completed.  Even more intriguing is that the design itself is based on aerodynamic principles from Dr. Augustus Raspet – a friend and mentor of the designer and builder Henry Covington who was an expert in Aerodynamic design.

The Shark coupe was started in the late 1950s and on the street by 1959.  Henry worked with a neighbor who was a fiberglass expert – Glenn Gums to build the first prototype – a car featured on the cover of Mechanix Illustrated in April, 1962 and later in other magazines such as Hot Rod, Road & Track, Car Craft and more.  Sadly in May, 1962 Covington passed away with just six cars/bodies built.

Later in 1962, Glenn Gums was determined to continue the Shark but make it more practical by turning it into a roadster.  Over the course of two prototypes, styling changes were made and agreed upon and 6 production roadsters were ultimately made.  Ultimately, the design of the Shark Coupe led Road & Track Magazine in 1966 to recognize the Shark concept car as the most streamlined car in the world.  Of the 12 Shark coupes and roadsters built, just 4 remain today.

This is a car I’ve owned since 1980, and one in which we restored and debuted at the 2013 Amelia Island Concours d’Elegance.  This car has appeared on Jay Leno’s Garage and Autoweek did a tv feature on it too.  Here’s a 3 minute video by Autoweek for those of you who are interested in learning more:

You can learn more about the Shark by clicking on the following link: 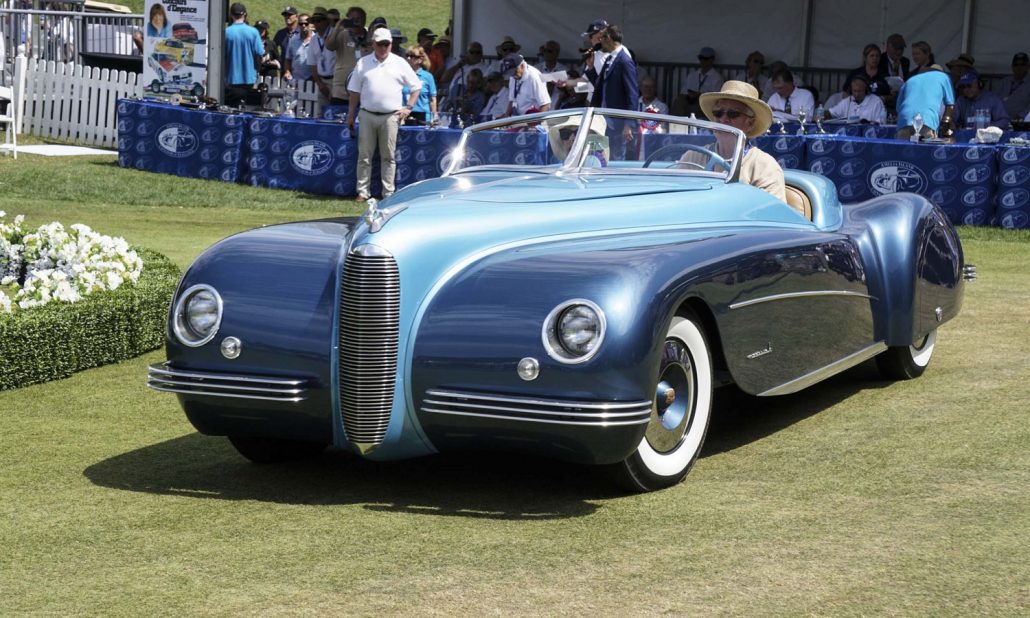 Here’s a short overview of the history on the 1963 Maverick Sportster:

“The Maverick Sportster is a Land-Bound Pegasus with airborne power and cloud-like riding quality” (Maverick Sportster brochure, 1953).  The car was designed by Sterling “Smoke” Gladwin Jr., of Mountain View, California who was a retired aeronautical engineer having worked for Boeing and Lockheed during and after World War II.

Fascinated with the elegance of pre-war automobile design, Gladwin built a postwar boulevard sports car with modern power and classic lines.  He built the first Maverick for himself using a 1940 LaSalle chassis and a flathead Cadillac V8 motor.  His company, Maverick Motors, then built the remaining 6 cars for customers using postwar Cadillac chassis’ with 331 cubic inch Cadillac motors.

This Maverick was originally owned by Smoke and Myrtle Gladwin, and he retained this and another Maverick his entire life. The Maverick Sportster is known as America’s last boattail speedster and is often regarded as America’s Postwar Duesenberg. 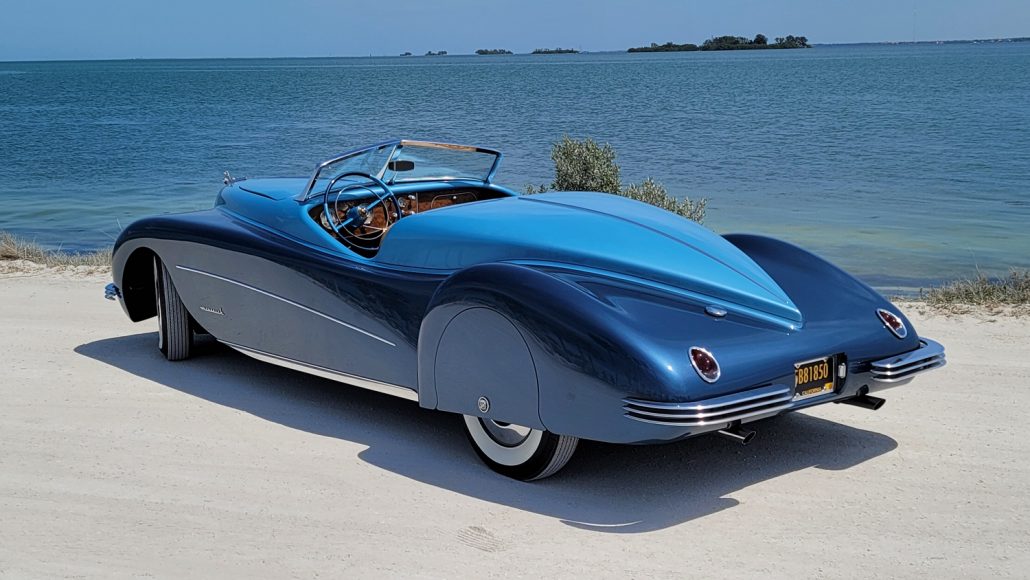 Back in 2013 we partnered with Tom Chandler to both own and restore this Maverick.  We were honored to debut our car at this years Amelia Island Concours d’Elegance.  Here’s what Amelia had to say in a press release about the appearance of our Maverick earlier this year:

Jacksonville, FL – Visited by the same sort of refined esthetics and sophistication that motivated Edsel Ford when he conceived the Lincoln Continental, aeronautical engineer Sterling “Smoke” Gladwin created the Maverick Sportster, a California-flavored 1950’s take on the French species often called the boulevardier.

Seven Mavericks were created. On May 23, 2021 one of the rare California breed will debut at the Amelia Island Concours d’Elegance thanks to years of ruthless research and an exquisite restoration.  The foundation of the Maverick Sportster is Cadillac.

A fact that the former Boeing and Lockheed engineer who created and designed it was most proud. And he said so openly in Maverick sales literature. Stock Cadillac components mated with the reduced weight of its fiberglass body shell – some Mavericks had no hoods or doors – gave the Maverick a power to weight ratio of 12-to-1, something that engineer Gladwin compared to high performance aircraft.  That made for a boulevardier with muscle. Cadillac’s 331 OHV V-8 could be mated to any stock Cadillac transmission.

On some models, a passenger side door was included as Gladwin did not want the driver opening his door and stepping into harm’s way. He dismissed the lack of a hood claiming that the entire body could be removed from the frame in six minutes.

“Debuting a brand-new restoration is one of the true honors – and pleasures – of hosting The Amelia,” said Bill Warner, founder and Chairman of the Amelia Island Concours d’Elegance.  Bill went on to share…

“The Maverick is one of those rare customs I’ve taken to calling a ‘destination car’ – a car so elegant and beautiful that it’s capable — all by itself – of drawing hard core car people to the Amelia. And I’m proud that the owners have chosen us for its concours debut and that it’s a 100 percent American car even though it speaks to me with a Parisian accent.” 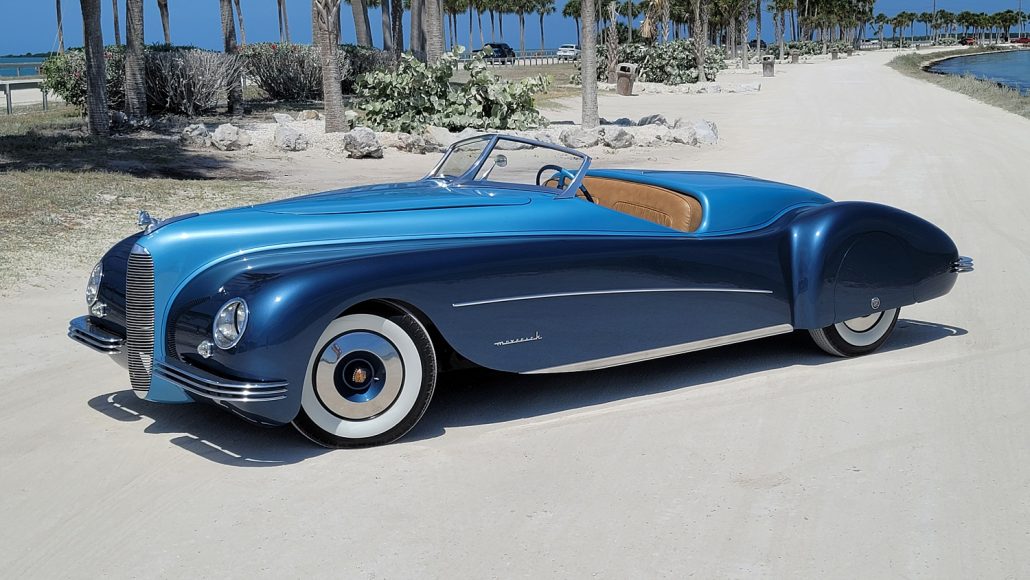 You can learn more about the Maverick Sportster by clicking on the following link:

Click Here To Learn More About the Maverick Sportster 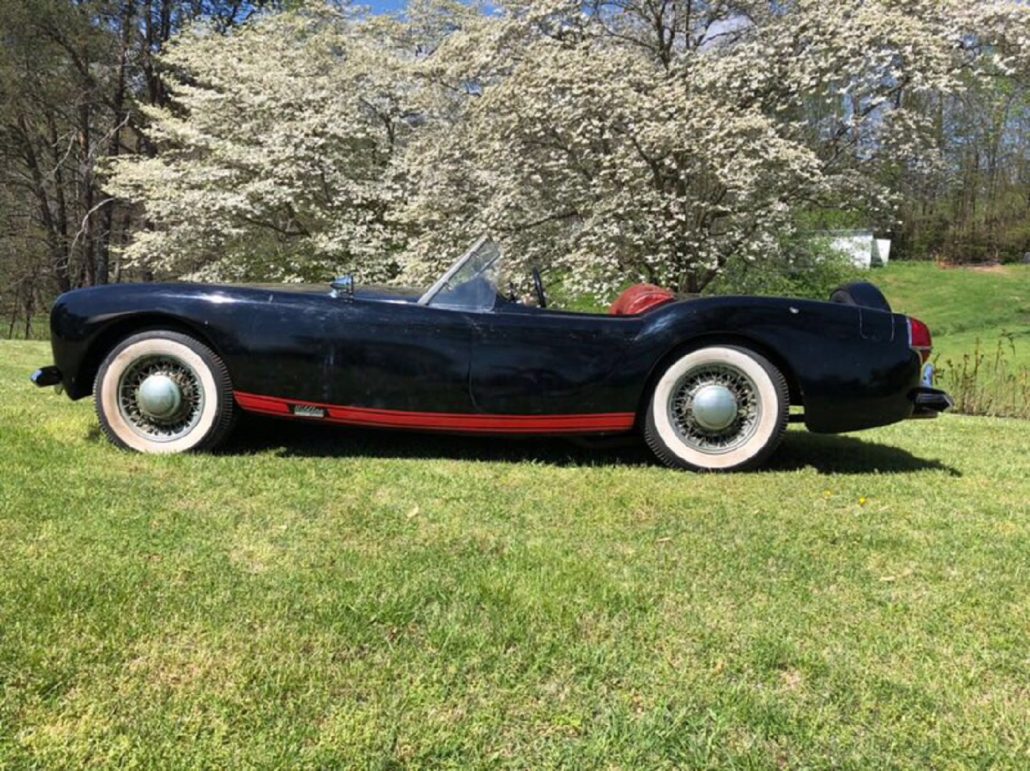 Here’s a short overview of the history on the Woody Woodill’s Personal Wildfire:

The Wildfire quickly became one of the best known sports car companies in America and was featured in popular movies of the time such as “Johnny Dark”, “Written on the Wind” and “Knock on Wood.”  100 examples – bodies and sports cars – were built over approximately 5 years.    The Woodill Wildfire on display is Woody Woodill’s personal car.  It was used for promotional purposes to advertise the company, movies that the car appeared in, and more.  This car is powered by a 1953 Mercury Flathead with Fenton intake, headers and heads, and dual-point Mallory ignition.  Woody kept this car thru the mid 1960s.  Fewer than 10 restored examples of the Wildfire exist today.

We’re still finding cars out there gang and this Wildfire is a special one.  This car is owned by Al Polack and the documentation confirms it was Woody’s car and used in at least one movie too.  Woody built it in 1954 and used it in press release photos (see below).  The documentation shows he sold it in 1965.  We’ll post a story about this car soon on Undiscovered Classics.  It’s a special car that hasn’t been seen in public for 50+ years and it will make its debut on Sunday October 17th, 2021 at the Chattanooga Concours d’Elegance. 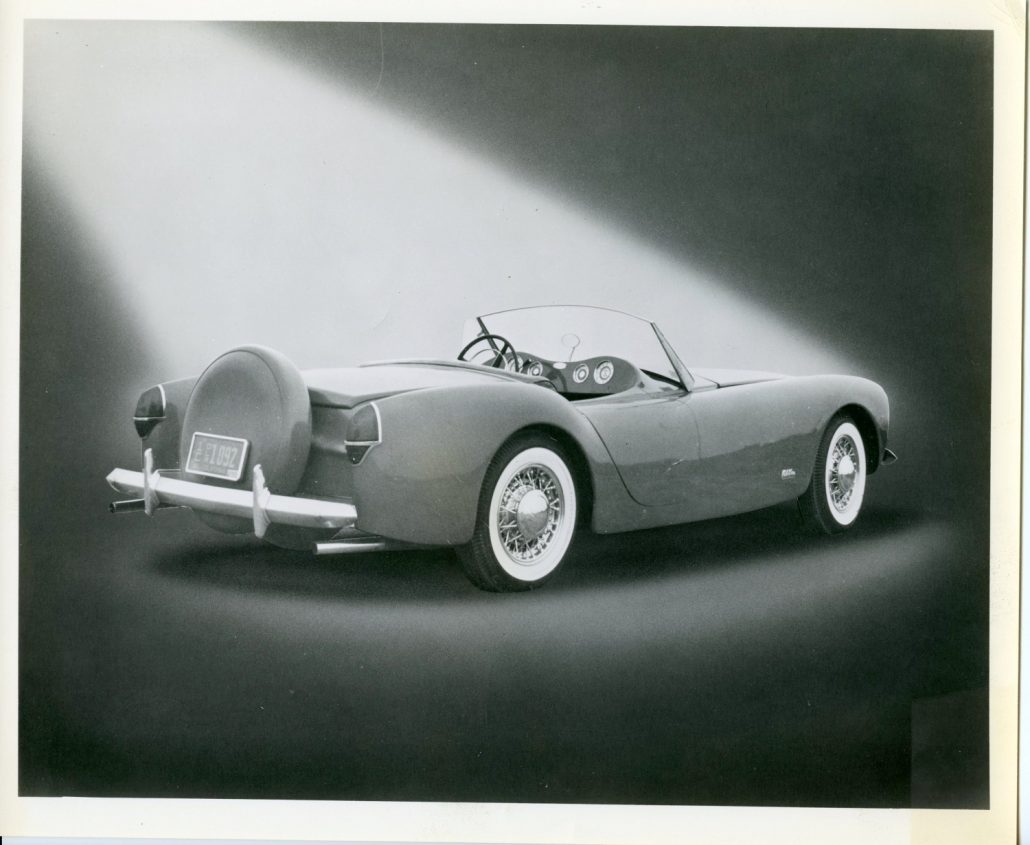 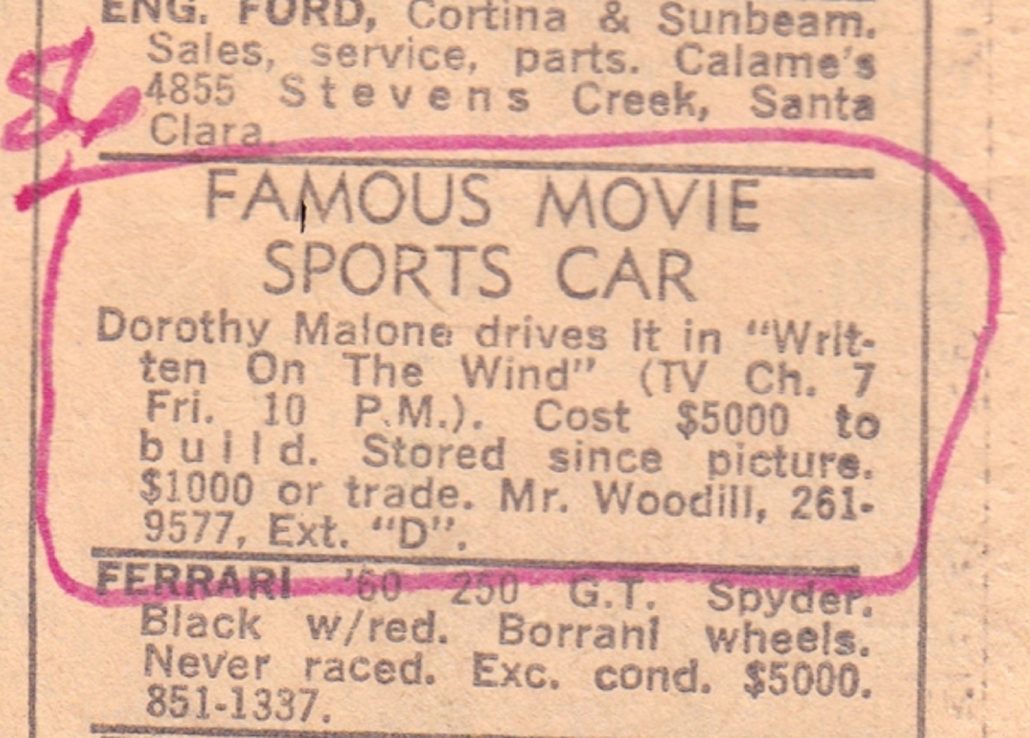 You can learn more about the Woodill Wildfire by clicking on the following link:

Click Here To Learn More About the Woodill Wildfire

We hope to see you next month in Chattanooga, and for those of you wanting to learn more about this event and the other activities that will be occurring during the concours, click on the following link:

And a special thanks to Ken Gross who asked us to help create a special display of our cars.  Ken has been instrumental in helping us celebrate handcrafted cars across the world, and those of you attending the Chattanooga Concours will have a chance to meet him.  You can also learn more about Ken and other celebrity guests that will be at the concours via the link below: