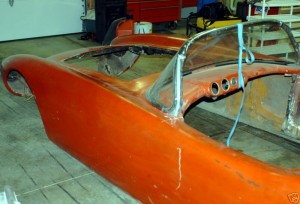 As you’ll learn in his story below, Dave Peterson has been a fan of vintage ‘glass for years gone by.  And it was his love of the vintage design – particularly the Byers SR100 design – that led him on his ultimate quest of researching and then finding his car with its own special history.

It couldn’t have happened to a nicer car guy 🙂

Recently, I asked Dave if he would be kind enough to put pen to paper and write us a story of his passion, his car, and his quest.  Dave immediately stepped up to the plate and that’s the story I’m honored to share with you today here at Forgotten Fiberglass.

Take it away Dave….

I’m sure the path to Byers ownership is unique in every case, but for me all the logical reasons gave way to good old car-guy lust.  Science has shown that the intensity of male ogling is directly proportionate to certain ratios and symmetry in the female form.

I think a very similar mechanism plays out in the male attraction to certain shapes and proportions of automotive appeal.  How many times have you seen a picture of a cool car with a gaggle of males standing around staring in unison?  Of course in the case of cars, it is not rude to burn a hole in something with your eyes. 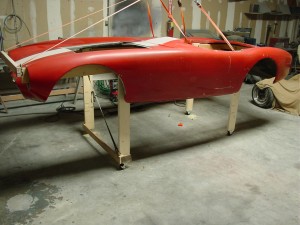 Dave Separated The Body From The Chassis Early On To Get a Good Idea On The Condition Of His Byers SR100.

For me, I was minding my own business when a particularly curvaceous form jarred my retinas.  After a long hot day of vintage racing at Texas World Speedway, the path through the garages only serves as a shortcut to the showers, not an opportunity to dally.  Nonetheless, John Furlow’s Byers-bodied, Kurtis 500KK always caused me to linger and delay.

I had no choice but to stop and stare as the flowing form beckoned in the dim florescent light.   Photos don’t do the SR 100 total justice as the curves don’t seem as vivid as they appear in the flesh.

I wonder what Jim Byers was thinking when he designed this car.  What were his reference points?  The gaping fish-mouth look was a standard styling cue of specials and factory racers throughout the 50s and early 60s.  Some wore it well and some didn’t.  Still others were wearing it out.

Those whom are oblivious to that great era of the 50s specials think the Cobra is where it began and ended, not knowing that the form evolved from the somewhat homely grimace of the late 50s AC Ace, to the chunky and excessive fodder of thousands of kit cars we see today.

We all know he had the template of the Meteor SR100 in front of him, on the heels of his split with creator Dick Jones.  I’ve read various quips that Jim’s influence came from Ferrari.  I think that is too convenient a name-drop and doesn’t really fit when you look at the Ferrari models of that era.   From my perspective, I suspect something more like the 1953 Lancia D24 Spyder Sport might have been influential.

Back to the track, where I was interrupted from my trance by author and kit car aficionado, Harold Pace, where he surprisingly informed me that the body was made by Byers and not Kurtis as I had assumed.  “There are still a few of them out there,” he said.    With little hope, I asked him to keep an eye out for me (“Would you tell her I asked about her?”).

Half-heartedly, I would occasionally search “kit car” on Ebay, hoping to stumble upon one by dumb luck.  Then I found a hokey ad for a 1965 kit car, rife with exaggeration and misinformation.  The ad was primarily for a modern kit car chassis, with an unknown body in the background, included almost as an afterthought.    It didn’t really click until I saw the distinctive teardrop shape of the front fender in ¾ view.  The first generation Corvette windshield confirmed my suspicions. 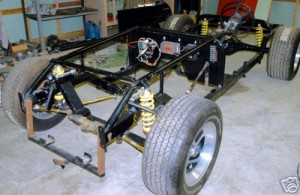 Although The Chassis Is Modern, The Construction Looks Sound And It Should Make A Great Foundation For Dave’s Sports Car.

Several months later I was on my way to Marshfield, Missouri to retrieve what we now know is an early 60s Kellison variant of the SR 100.

Though cracked in several places from improper transport, the car was fairly well preserved due to being socked away in a warehouse for 15 years.  The seller, a salvage yard operator, had scrapped the original chassis and knew nothing about the lineage of the car.   He gave me the far too familiar story about a lost title that he would send if he ever found it.

I was shocked when he called a couple years later asking for my address so he could send the title and so began the story of the 1965 Snedeker Special.

We know from several examples how owners modified their SR 100 builds to their own tastes.  Some modifications were extreme with a couple shortened bodies and few builders could leave the taillights alone.   At first glance, the Snedeker Special (which we assume was named after the original builder), just appeared to be an unfinished shell painted in a deep orange hue.

The more I worked on the car, the more evidence I found of a once running car – holes from hood hinges, wipers, mirrors, wiring and body mounting.  Modifications to the original shell are significant, with the cockpit opening extended almost a foot further back and the hood opening cut short, which means the forward portion of the original scoop was removed.

Strangest of all is the fiberglass dash cap which creates a gauge pod bulge, almost continuous with the hood scoop.  This piece required somebody making a mold off the original body in order to accurately duplicate the Corvette windshield flange.  The piece was laid with a chopper gun, implying that somebody was involved in or had access to a fiberglass manufacturing business of sorts.

I had originally thought that Kellison, built the shells with door boxes, but old catalog pictures and Geoff’s recent acquisition of a bare shell indicate these items were likely added by owners. The Snedecker door boxes are there in rough plywood construction, as is a wooden trunk floor with a channeled provision for what once was a fuel filler in the side of the passenger quarter. 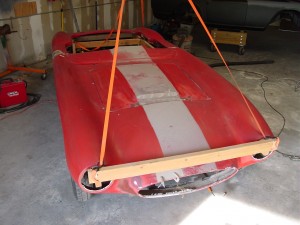 Here You Can See More Easily The Modifications Made To The Hood And Air Scoop – In Terms of “Placement” On The Car.

Par for the course, the taillights were moved outboard using 39 Ford teardrop variants, which have always been popular with hot rodders.

Curiously, the inboard taillight areas were patched over, which didn’t click until Geoff informed me that Kellison removed the Byers taillight pedestals from the mold.  So, now we don’t know why the Snedecker has patched holes in the Byers inboard location when it is a Kellison body.   Sanding the paint will no doubt reveal the truth in the gel-coat beneath.

Well all this chatter is just automotive archeology.  We really won’t know the whole picture without talking to the original builder.   That may not be possible with this car, but we did find the owner who actually registered the car on the street in 1981.   A touchy guy was hard to track down, this prior owner only offered that the car was Ford 289 powered and had something like a Henry J chassis.   He spiced up the story by claiming that he outran the cops several times in rural Oklahoma after they keyed in on his non-functioning taillights.

Since this writing, I contacted a Henry-J expert and found the wheelbase was 100”, perfect for the Byers without modification.  Rollie Langston’s use of  the Henry-J platform validates this.   DMV title search offerings in Oklahoma and Kansas leave hope for finding the complete story of the Snedeker Special.

Dave and I have been corresponding about his car, and he recently outlined a few questions for our group that I thought I would share with you as well.  Here’s what Dave had to say:

So then I asked him if my VIN sounded like a Henry-J VIN.  No go on that one, but I did find that Oklahoma and Kansas still have title search services.  So, I think I will try that angle to ferret out the origins of the Snedeker Special.  I called a Snedeker in Oklahoma, thinking the name was unique enough to yield a lead, but no luck.

The Byers is finally home since we sold my wife’s house in Dallas.  Attached is a picture of the homecoming.  It does have a running Ford 351 in it now, which looks identical to the 289 and shares all the same accessories, except for the intake.

1: As I’ve mentioned before, my Kellsion body shows interior patches on the inboard taillights.  I would like to see if somebody else with a Kellison body sees the same thing.

2: Also, the wooden door boxes have caused the fiberglass to “pull” or shrink wherever they contact the body, leaving an outline and even cracks on the outside.

It seems they had to have been placed in the mold wet and the glass cured around them.  Anyway, its going to be a lot of work smoothing those areas out.  I anticipate having to remove the door boxes and then put them back in.  They are very crude and brittle.

So…any of you out there if you have answers for Dave, let him know via the “Comments” feature at the bottom of this story.   I know he would appreciate your thoughts in every way. 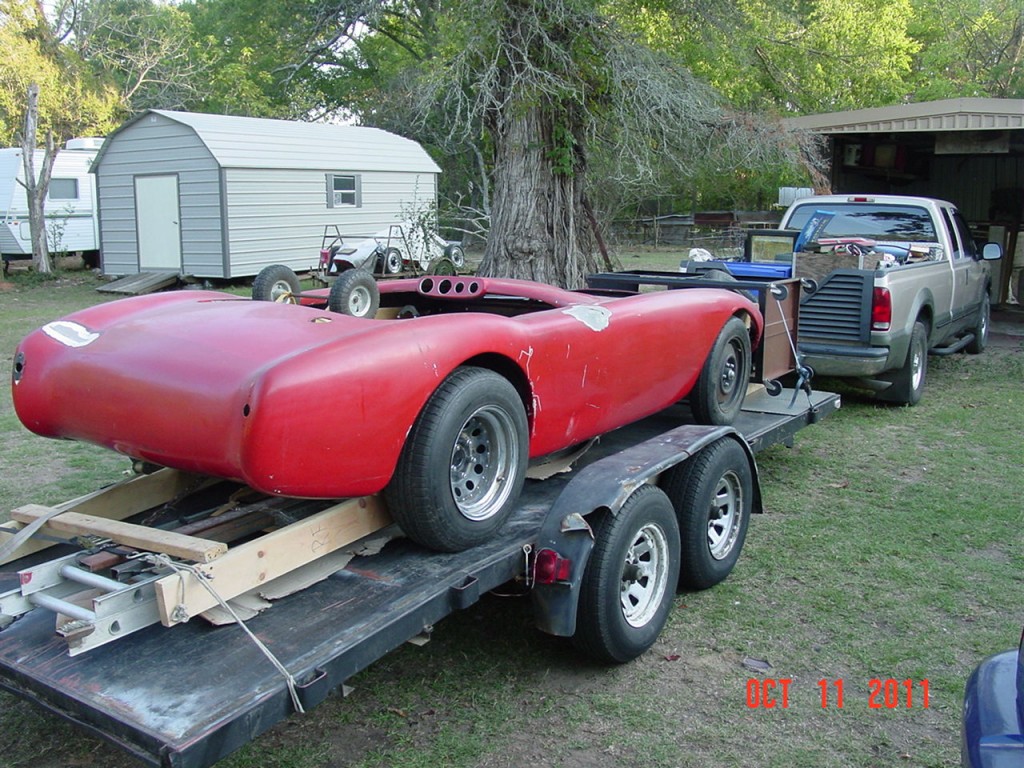 Just 14 Byers SR100 Sports Cars and/or bodies have survived so Dave has a very special car, and I’m excited to hear about the progress he’s making in every way.  Keep us posted on what’s up and when it’s running and driving Dave…take some pictures and videos.  We’ll share them here on Forgotten Fiberglass for everyone to enjoy.

There are a lot of neat features on Dave Petersen’s Byers SR100 sports car gang, so hopefully we’ll find more of its unique history via vintage stories and photos as we progress in our research. 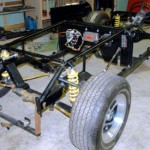 Although The Chassis Is Modern, The Construction Looks Sound And It Should Make A Great Foundation For Dave’s Sports Car. 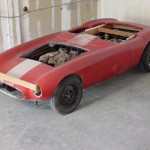 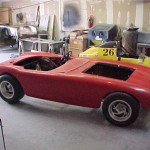 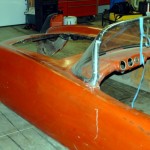 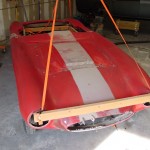 Here You Can See More Easily The Modifications Made To The Hood And Air Scoop – In Terms of “Placement” On The Car. 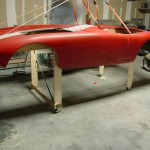 Dave Separated The Body From The Chassis Early On To Get a Good Idea On The Condition Of His Byers SR100. 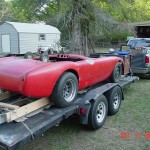 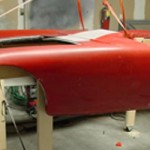