Back in September 2011, I received the following e-mail:

I’m in the process of scanning 35mm slides taken by my father, Robert W. McJones, in the 1950s.  I came across some that he labeled “Dick Jones Custom Car”. Via Google I came across your article https://www.undiscoveredclassics.com/?p=13370 and learned that the car in the picture is the Meteor SR-1.

I thought you might enjoy these pictures, which I suspect were taken somewhere in Los Angeles.

The pictures were stunning, and I’ve reproduced them in our story today with the permission and great thanks to Robert’s son – Paul McJones.  I asked Paul to share a bit more about his father who turns out had a fascinating career at a very exciting time in America’s history.

Here’s what I learned:

Robert was born in ’22 and went into the US Army Air Corps in 1943 at age 21.  During the war, he was a B-24 First Pilot / Airplane Commander.  In this capacity, he flew 41 combat missions in the SW Pacific before leaving the service at the end of the war in ’45.

He obtained a Masters Degree in Aeronautical Engineering from CalTech in 1948. From ’48 to ’50 he worked for Douglas Aircraft at their El Segundo Plant as an Aerodynamicist.  From ’50 to ’53 he worked for Marquardt Corporation as their Chief Preliminary Design Analyst and was responsible for all analytical studies relating to supersonic ramjet engines and accessories.

From ’53 to ’55 he worked for American Helicopter Company as their Chief Powerplant Engineer and afterward he was a free-lance consulting engineer in the field of aerodynamics with clients in many of the largest aerospace plants in Southern California.

Robert had an amazing career at a very important time in our country, and I salute him for his contributions in service and in the public sector.

I asked Paul for a bit more information concerning his father’s interest in cars.

He shared with me that although his father never built a car from scratch, that didn’t keep him from “re-engineering” a few of the family cars to make them more of a hot rod, and to bring up that power.  When Paul was growing up, he remembers that there was an interesting used car dealer who lived across the street from their home.   This person brought back sports and foreign cars that attracted his father’s constant attention – some of the neatest sports cars of the era.

No doubt sports cars and tinkering with cars was certainly an interest and great fun for Robert McJones in the ‘50s.

Let’s check out those pictures.  And remember…use your mouse to click on each of the photos below to make them appear larger on your screen. 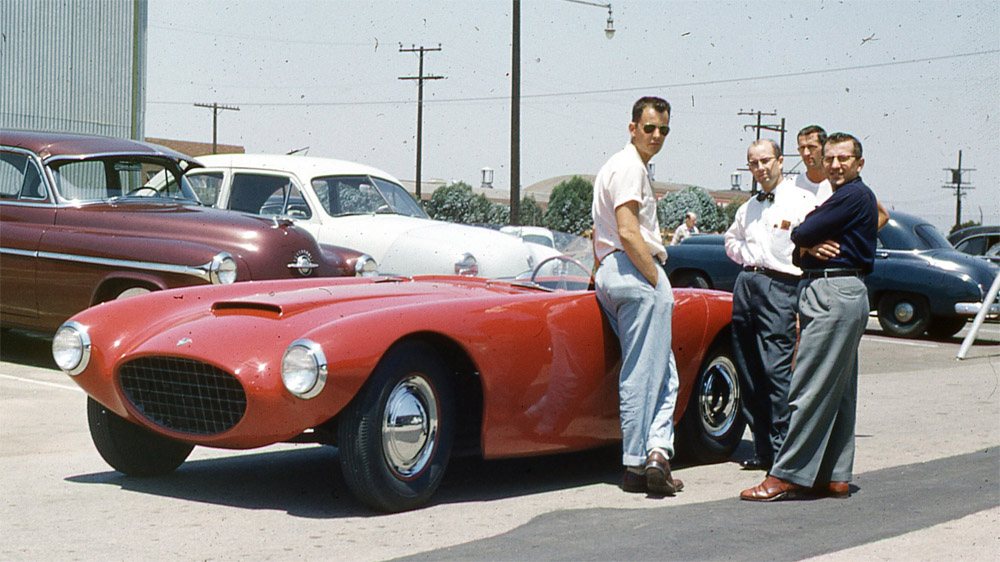 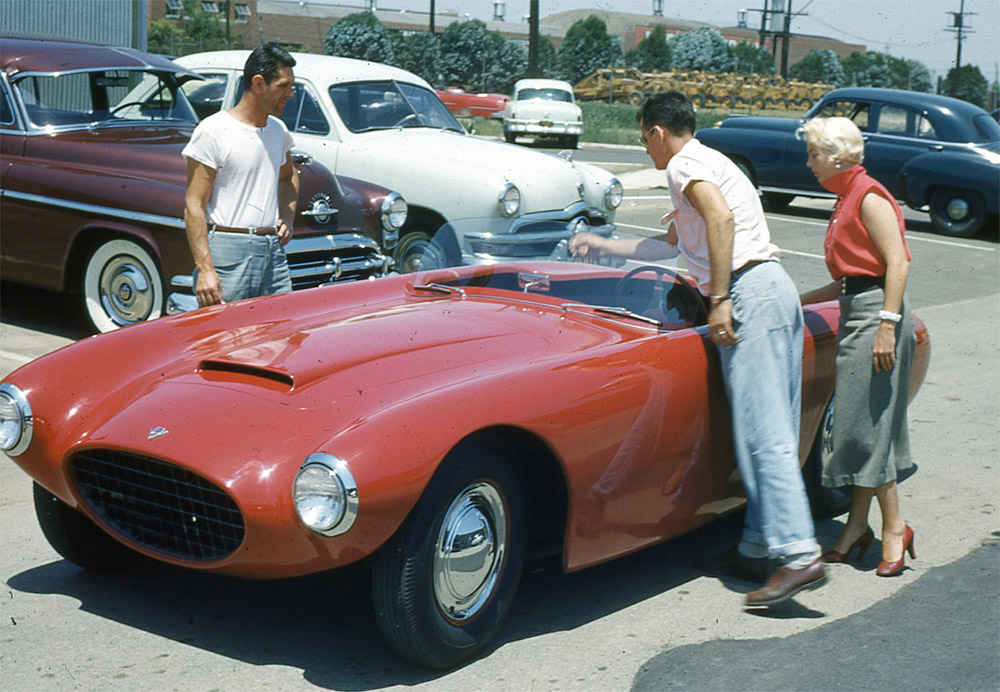 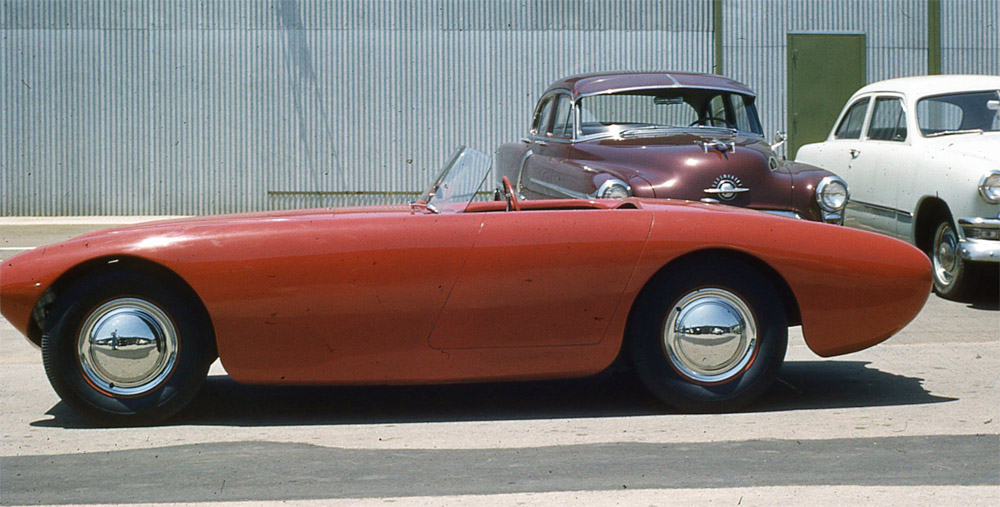 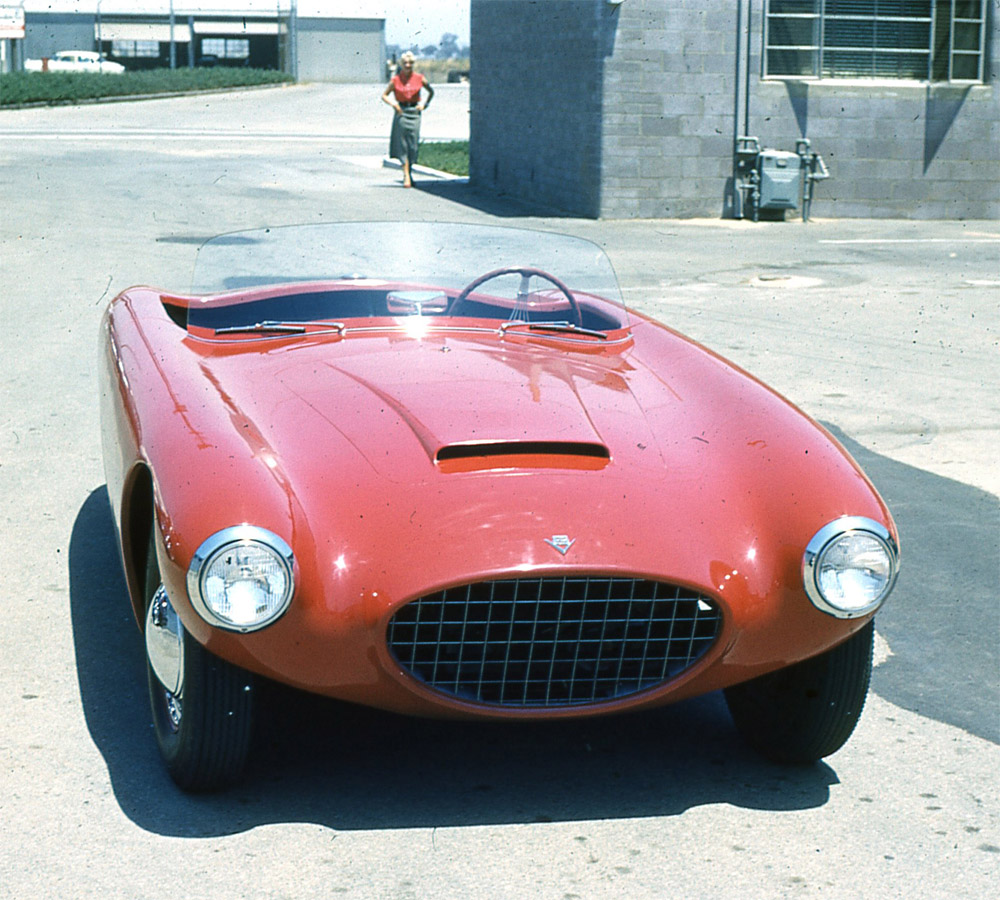 Thoughts on the Photos:

During interviews with Dick Jones, he shared with me that he and Jim Byers nearly finished the first Meteor SR-1 for the November ’53 Petersen Motorama.  It appeared in the show, but  wasn’t running and there was no interior.  This was one of the reasons they used a tonneau cover – to hide the absence of an interior during the show.

So the pictures above were most likely taken in ’54 after Dick had finished his Meteor but before moving to Colorado.  This would place the most likely location of these pictures at the American Helicopter Company in ’54.  We’ll have to find some folks who worked for the company to visually confirm the location.

Robert McJones is the dedicated photographer here, so he is not shown in any of the photos.  However, Dick Jones is clearly in two of them – he’s the one in the light blue slacks and white short sleeve shirt – wearing sunglasses.  It’s unknown who the other folks in the photographs are, but most likely employees of the location where these pictures were taken.

Check out that windshield gang.  In ’53, the wrap around windshield from the Corvette, ’53 Eldorado, and other GM products were not yet readily available.  Dick actually fiberglassed a channel into the body for the glass that was used to fit the car in these pictures.

Pretty amazing work here gang.  Dick later shared with me that when he was towing his Meteor SR-1 to his new home in Colorado, the windshield flew off.  Dick was certainly glad when the ’53 wrap around glass became more readily available in the mid to late ‘50s for purchase.  After all, he needed a new one to replace the one that went missing 🙂

These are some of the nicest color pictures we’ve been able to obtain of Dick’s first Meteor SR-1.  Click here to checkout the black and white versions used in the April ’55 story about Dick Jones and his Meteor SR-1 that appeared in Road & Track Magazine.

Thanks again to Paul McJones and his father, Robert McJones, for making these photos available to us and giving permission for us to share their story here at Forgotten Fiberglass 🙂