What fun it is to learn about cars from knowledgeable folks within our group – in this case, Will Silk.  Will has offered to put together fiberglass-related articles from time to time and today’s article is a fascinating look at the history of TVR – a UK based company.

Let’s turn it over to Will and see what he has to share about TVR and the men who built the company.

Take it away Will 🙂 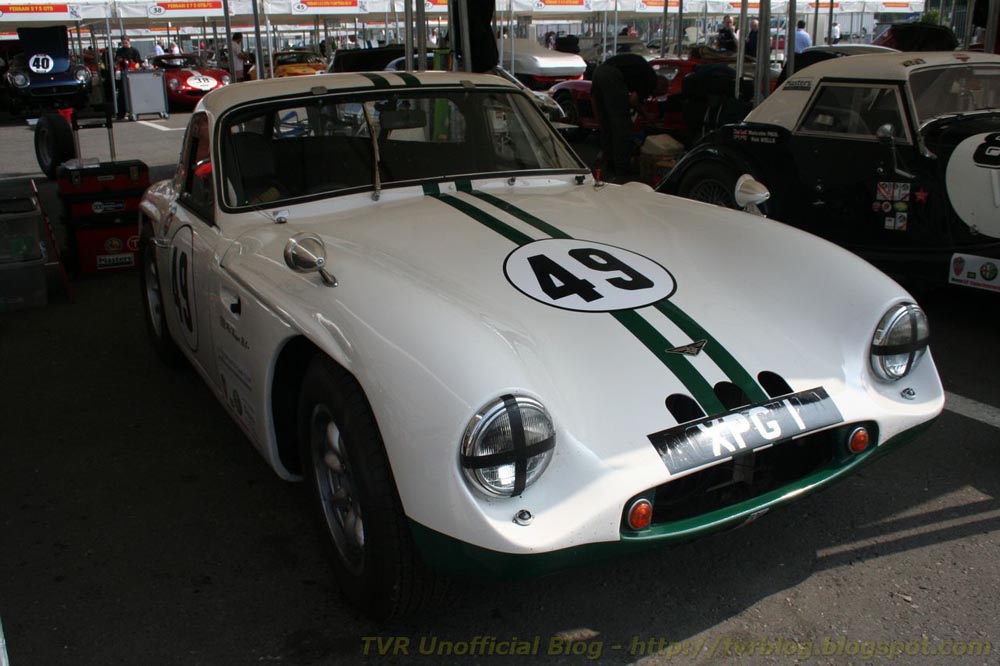 TVR Vixen: A Fiberglass Fantasy
By: Will Silk

TVR has always been associated with cars of glass fiber construction that charismatically carry themselves in a much different manor than many of the Blackpool-based company’s competitors.  The early 1960s was a tumultuous time within the Hoo Hill works in the English seaside town of Blackpool.

Company founder Trevor Wilkinson found himself ousted and a board established to run the works until the Lilley family arrived in late 1965 to resurrect the spiraling sports car manufacturer and build TVR into one of the most feared marques as far as true road going sports cars are concerned.  One of the models that helped cement TVR’s rise was the Vixen range of cars made between October 1967 and early 1973.

The Vixen was not a clean sheet redesign by any means.  The financial predicament the company was in at the time of Arthur and Martin Lilley’s arrival was incredibly serious.  One good thing that was already in place was a decent chassis that was designed and used for the 1962 Grantura Mk III. 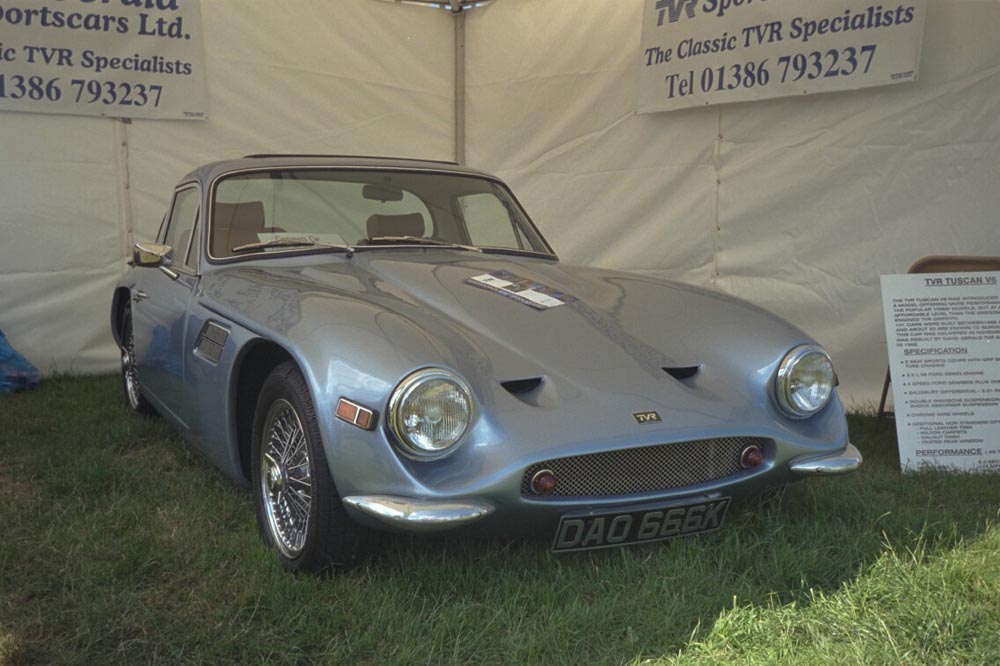 John Thurner had arrived at TVR from Rolls Royce in the early 1960s, and spent a brief time redesigning the initial chassis which was of tube construction with VW sourced torsion beams located both fore and aft for suspension duties.

While this method was true in the form that it offered the chassis four wheel independent suspension, it was not well liked by many road testers of the day, as the rough ride did not set well with many of the automotive journalists of the time.  Find a smooth stretch of road, or even better, a race track; and the early Grantura chassis became a beautiful thing indeed.

Thurner’s job upon arrival was to redesign the chassis in order to become more compliant in ride, but yet retain quality handling characteristics.  Thurner accomplished this with a chassis that bore a striking resemblance to Trevor Wilkinson’s design that carried the company throughout the 1950s.  The major difference though was that Thurner’s chassis utilized coil springs in place of the VW based torsion beam set up.

This would be the general chassis layout for TVRs throughout the 1960s and into the early 1970s. 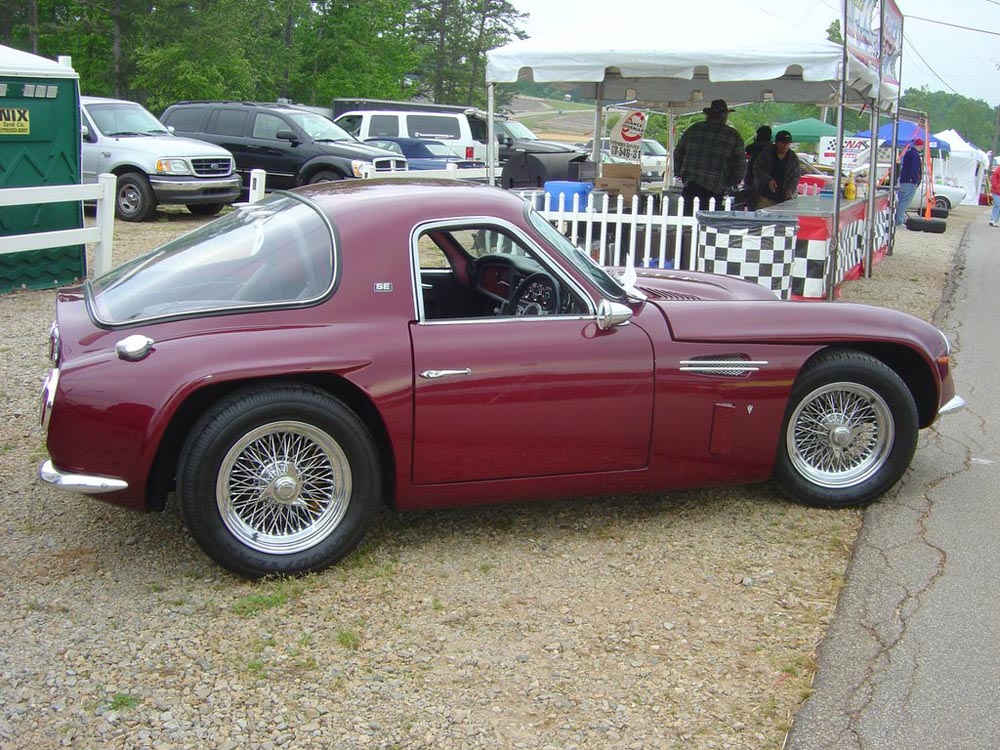 When the first Vixen appeared in the fall of 1967, it differed little from the outgoing Grantura 1800s, of which few were built.  The Vixen did debut TVRs new Manx tail body work, which saw the tail section of the body literally cut off immediately following the rear window.  However it was under that petite little body of glass fiber that the real change was made, and that was the debut of the Ford Cortina cross flow 1600cc engine and gearbox.

The smaller Ford engine was lighter than the previous model’s BMC sourced MGB mill, although power was down a bit as the Ford unit was rated at 88bhp and the all synchromesh four speed lacked the overdrive option that was enjoyed by the BMC transmission.

This didn’t seem to affect sales the way most would think, as 117 S1 (Series 1) Vixens rolled out of the Blackpool works.  This was substantially more than the Grantura 1800S (MkIV) with a production of just 78 units.  It is important to note that a few early production S1 Vixens escaped with the BMC drive train in place of the intended Ford unit, as TVR made every effort to use up what was left in its stock room. 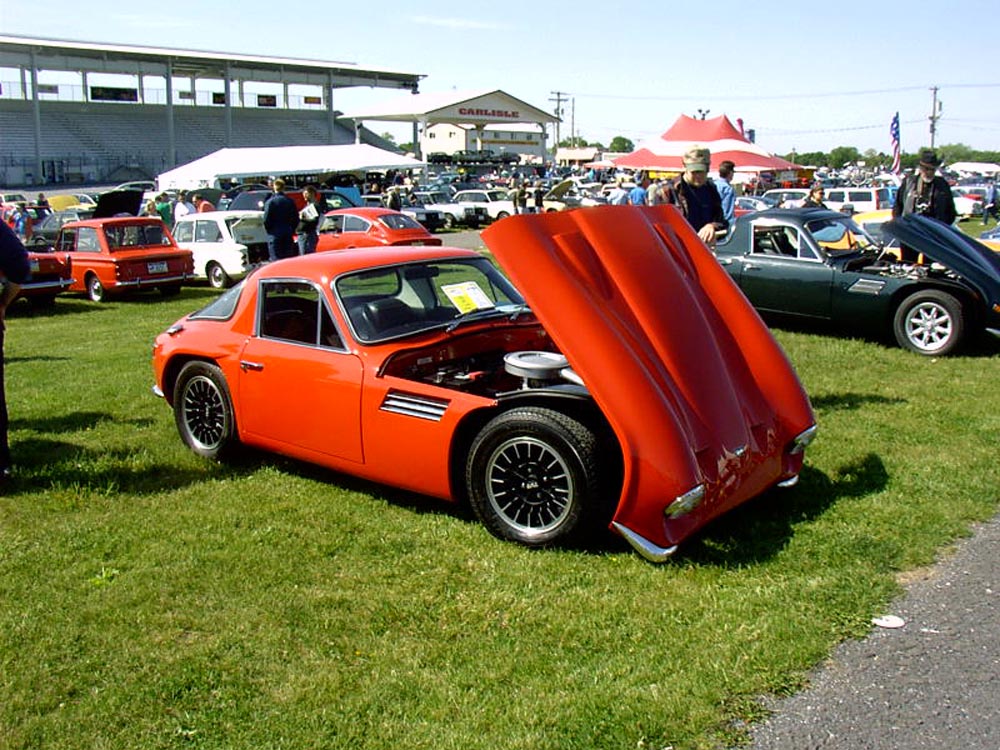 In October 1968, TVR began production of the Series 2 Vixen.  While mechanically the S2 was nearly identical to S1 specification, the major breakthrough came in the chassis receiving a stretch to put the wheel base at 7 feet 6 inches versus the S1 Vixen’s 7 feet 1.5 inch wheel base.

This new, stretched chassis had been developed for the Tuscan V8 SE, but was found to greatly add to ergonomic comfort within the cockpit area and especially with entering and exiting the small coupe, as the doors also grew larger with the change to this body and chassis configuration.

Along with the new chassis came yet another breakthrough in the engineering of TVR sports cars.  The Vixen S2 ushered in the era of bolting the fiberglass body to the chassis; whereas all previous models were actually bonded to the chassis with fiberglass. 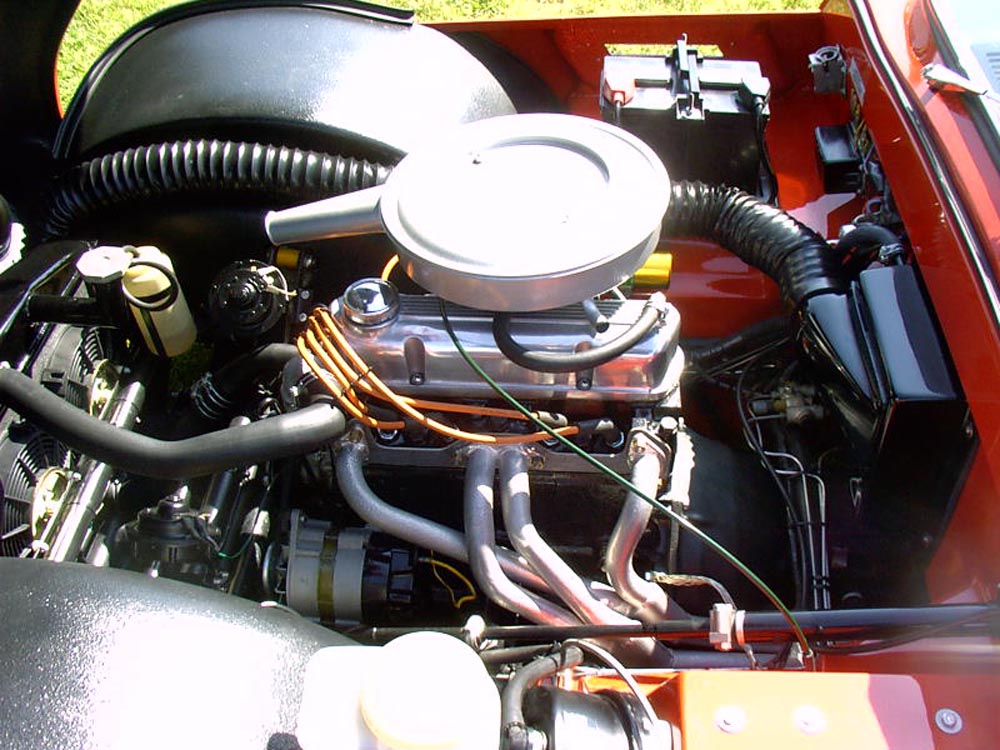 This revelation defines the rarity of pre-1968 TVRs today, as the repair and restoration of the earlier cars is incredibly hard due to their construction techniques.  Bolting the body to the chassis allowed for much easier repair in the event of body and chassis damage, and has made the life of many restorers much easier.

Other changes that occurred happened throughout 1969.  The addition of wrap around tail lamps and two small NACA-style ducts in the bonnet were introduced as well as power assisted brakes.  All in all, TVR was moving steadily forward, and Vixen S2 sales reflected this shift in momentum with the delivery of 438 units by the end of 1970.

In the latter part of 1970, TVR moved its factory from Hoo Hill to Bristol Avenue, where production soon resumed with the Vixen S3.  Little had changed with the S3, as sales from the S2 were very strong for the small company.  One improvement came in the realm of horsepower, as the S3 engine was borrowed from Ford’s Capri 1600GT, and was rated at 86bhp (DIN) versus the S1 and S2 variants rating of 88bhp (net).

The last S3 manufactured in April of 1972 also represented the end of an era for the Thurner chassis, which was phased out in favor of the new M Series chassis that was developed under Martin Lilley’s leadership.  In all, 168 S3 models left Bristol Avenue by the time production closed in 1972. 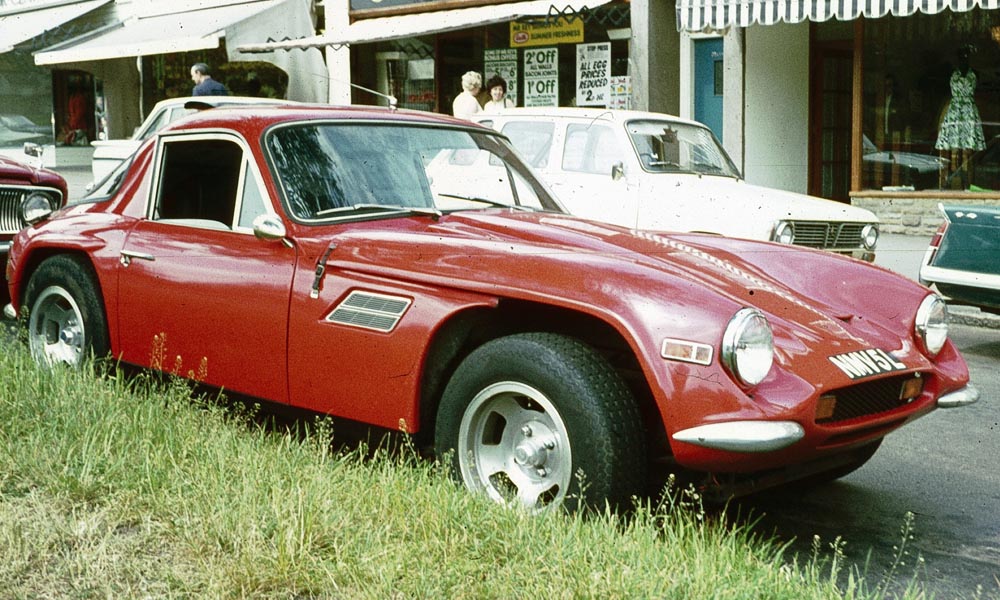 1972 marked a new beginning for TVR as the new M chassis was beginning to debut.  This chassis was much influenced by Mike Bigland, a TVR dealer and engineer from the English Midlands.  The big shift was in material, a switch to 14 gauge tubing over the thinner 16 gauge that was used in previous models, as well as square tubing being introduced for the first time to a TVR frame.

Suspension was similar in layout to the previous Thurner chassis, but this time was directly sourced largely from Triumph parts throughout.  Lilley insisted that the dimensions not be tampered with, as he saw the TVR chassis to be near perfect in regards to wheel base and cockpit size.

Because of this, the Vixen S3 body fit right onto the new M Series chassis, offering the Vixen a chance to continue life for yet another year.  By 1973 the Vixen’s time had come, and the Vixen name was retired.  Twenty-two cars were built during 1972 and just one left Bristol Avenue in 1973, bringing Vixen S4 production to 23 before manufacture of the short lived 1600M began.

The TVR marque has always been about robust, raw performance and the Vixen did not disappoint in this category.  A Series 2 Vixen had the ability to sprint from 0 to 60 in 10.5 seconds in 1969 and was rated with a top speed of 109 mph, some 4 mph faster than the 1600M that replaced the Vixen line in 1973.  Part of that spirited ability to accelerate came from the Vixen’s light weight chassis and fiberglass body that, when married to the drive train, tipped the scales at just 1,624 pounds.

While performance stats like these compare little to cars of today, these numbers were impressive for a four cylinder sports coupe in the late 1960s.  All this combined with a sexy little body and an affordable price tag made the Vixen series of TVRs one of the most lovable beauties to ever emerge from the Blackpool factory.

Thanks to Will Silk for sharing this article with us at Forgotten Fiberglass.  Now.. because of Will’s story, I’ll be on the lookout for one more fiberglass car to save 🙂 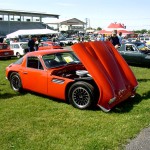 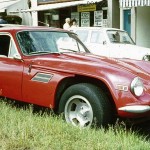 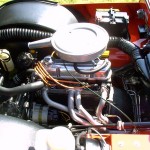 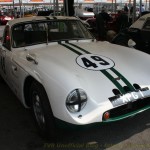 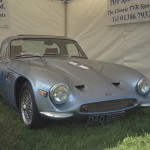 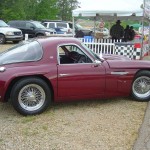 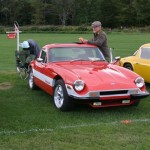 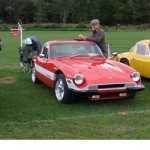