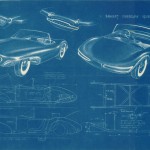 Here’s The Bangert Sports Car Blueprint That Boyd Saved For Over 50 Years. We’re Lucky Since This is Just One of Two Known To Exist

I met Boyd Lindberg because he found me – I didn’t find him.  Boyd had found out about Rick D’Louhy and our research project on vintage fiberglass specials and took the time, energy, and effort to track us down and ask the following question:

“Do you remember the Bangert Sports Car?  Do you have the blueprint for his car?”

Wow!  What timing was this!  Marshall Foxworthy and I had met with Noel Bangert in Orlando Florida a few months before, and Noel had shared with me he that didn’t create brochures for his cars.  Instead, he created blueprints that were poster sized.  And he made at least 3 different posters.  But Noel hadn’t saved any copies, so the hunt was on…

Back in 1956, Boyd was 22 years old, lived in Oceanside California, and was stationed at Camp Pendelton.    Like many young men of his age, he was energized by the thought of building his own sports car, and had looked at both buying a body (Bangert, Victress, Glasspar, Woodill, etc) and starting there – or building it himself.  He was going to go for the gold and build it himself.

Let me have Boyd tell the rest of the story: 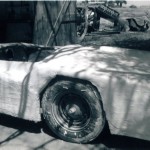 “I rented a garage in town to work on it.  It was located in an old set of wooden garages – one long building with about 12 different garages people could rent.  It wasn’t the best – it faced a railroad track and had a dirt floor – but I had the end unit with windows which was a bit better.

First I bought a ’39 Ford Coupe and took the body off.  Then, I cut down the frame with a hacksaw, clamped it together, and hired a portable welder to join it.    Next I built a frame of wood, covered it with chicken wire and then plastered all over it.  What a mess!  But…I was going to take a mold off of the plastered buck, so that was fine.

I never finished it past the rough stage, but I did take a few pictures you see here.  I was about to be discharged so I junked the body and sold the frame and running gear.”

My sports car interest continued, though.  Later in 1959 I worked for a Plymouth DeSoto dealer and was lucky enough when a customer came in to buy a enormous 9 passenger DeSoto wagon.  His wife had just become pregnant, and although it was their first child, I guess they were planning for a big family.  So.. the customer traded in his nearly new 1958 MGA – it had just a few thousand miles.  Boy was I lucky!  I bought that right on the spot in 1959 – my first sports car.  I eventually owned and restored 4 other MGA’s over many years.  Great memories! 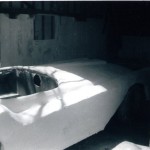 How many of these projects got started like this back in the 1950’s?   What was the likelihood of finishing them when you started?

This was a tough road to follow – remember the average car took 2000 hours from start to finish to build.  And many took 3000 hours or more – more than a full year of 40 hour weeks!  Boyd was one of the braver men to consider building his own car, and if he hadn’t left the military service when he did, we might be looking at a finished car today.

Thanks to Boyd Lindberg for finding us and sharing his story and pictures with our gang.  And for saving the rare and elusive Bangert poster too.  What a great find for all of us!   And…I hope you enjoyed the glimpse into one of many thousands of stories of building your own car back in the golden era of the 1950’s – when all things were possible.

Here’s The Bangert Sports Car Blueprint That Boyd Saved For Other 50 Years. We’re Lucky Since This is Just One of Two Known To Exist 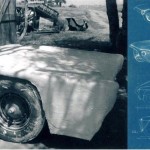