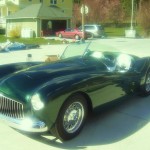 As a Tribute to Her Father, Meagan Watkins and Her Husband Exquisitely Restored the Family Glasspar G2. Great Job Meagan!!!

Lots of great stories to share with you “Glassheads” out there.  This one comes in from fiberglass friend and Glasspar Co-Historian Rodney Packwood.  Rodney has been working with Meagan Watkins of Washington State (the far Northwest from myself in Florida) to learn more about her father’s Glasspar G2.  Let’s turn the “reins” over to Rodney:

From the Desk of Rodney Packwood:

One of the benefits of the Glasspar G2 Registry that I’m managing with Geoff is that, in addition to the cars we learn about and document – we get to know the owners and their families.  Often these cars, now all of them being at least 55 years old, have missing histories.  Many of them come to the current owner with cloudy lineages – or none at all.   On occasion, though, a car shows up in the registry with an excellent history and a story that makes you smile a little… ok, a lot! 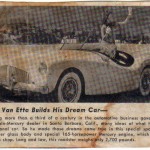 Meagan Watkins is a young lady living in Washington State, and the G2 featured here is a perfect example of a car with a story.   Seems this car was treasured and loved, but the owner’s family didn’t share his enthusiasm.  I can relate!   I think I’ll let Meagan tell the story the way she told it to me in October of 2009:

“Anyone who has spent any time at the Dascher house is familiar with the car rotting in our garage.  Legend has it that the car and two daughters were the settlement in my Dad’s divorce to his 1st wife.  The car sat amongst the broken toasters and other appliances that he fished out of the garbage.  He said he’d fix them when he found the time.  However his real pride and joy was his roadster.

The seats were worn and split and there was the dank mustiness with a whiff of old burnt oil.  The body was straight although it only had two mismatched tires.  To my dad it was a vision of true beauty and if he felt you worthy he would drag you to the garage and tell you in graphic detail the story of his prized possession.  He used to say, “When I retire Ill bring her back to her former glory.” 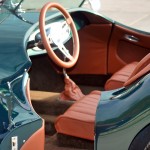 Interior Beautifully Restored by Meagan and Her Husband Julian. Her Father Would Be Proud of Them In Every Way

Well, Dad retired and life happened.  Things around the house needed mending.  There was always a child or grandchild that was in some bind that needed bailing out.  Plus Dad was never one to spend money on himself except for the occasional kickers at Big 5 or anything in the scratch and dent bin at Chubby and Tubby’s (he cried when it closed.)

In early 2004 Dad really started to slow down.  I noticed greyness to his skin tone.  If something was wrong, he wasn’t going to talk about it.  By July he relented and finally saw a doctor.  The diagnosis was stage 4 lung cancer.  He started treatment immediately but sadly, Dad passed away one month to the day of the diagnosis.

It was always known that Julian and I would inherit the car.  Nevertheless, no one really knew what kind of car it was.  Dad called it “The Roadster” or “The Van Etta”.  We called it “Dasher’s Folly.”  Finally, after comparing stories from family members and friends we pieced together the history of the car.  Dad bought the car off the showroom floor of Van Etta motors in Santa Barbara in the late 1950’s.  The car was a G2 made by the Glasspar boat company.  Some were sold as kits, and a few sold fully assembled. 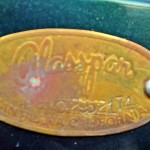 Because the car meant so much to my dad, and dad meant so much to Julian, he (my husband Julian) set forth to complete Dad’s dream.  After a few months of hard work, the car was almost finished.  I had just one last thing to do.

Dad was obviously a smoker so I thought it would be fitting to put some of his ashes in the ash tray.  But the car doesn’t have an ashtray so I sealed his ashes in a plastic bag with a note “For my Dad Arthur F Dascher….Forever in the drivers’ seat” and had it upholstered over so he’s always in the driver seat.”

I think I smiled all the way through Meagan’s story… I’ve have a few toasters in my garage, too.  The story of this wonderful car continues on, as G2 174 now has a sibling.  The Watkins family has acquired an additional unrestored G2 that is awaiting a rebuild.  I’m looking forward to meeting the Watkins family, and the cars as well.

Thanks to Meagan for relating this story about her father’s G2 and allowing it to be used on the website.

As a Tribute to Her Father, Megan Watkins and Her Husband Exquisitely Restored the Family Glasspar G2. Great Job Meagan!!! 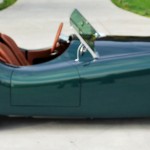 Interior Beautifully Restored by Megan and Her Husband Julian. Her Father Would Be Proud of Them In Every Way 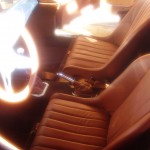 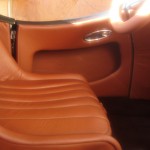 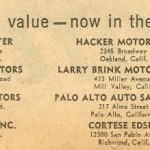 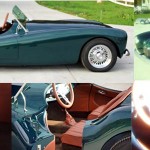