This is one early article on Glasspar G2 sports cars!  Bill Tritt didn’t really start rolling out the bodies from his Costa Mesa, California plant in any numbers until late in 1952 when Shorty Post had his frames ready to go.  In this article – July 1952 – the Glasspar named “Fiberflash” is already driving and in print.

In fact, this is one of the first Glasspar G2’s on the scene that have been documented beyond the first two – the Brooks Boxer and the Alembic I.  Another early G2 to appear around the same time was Bill Vaughn’s Glasspar built on a Singer chassis – the Vaughn Singer.

Fiberflash is interesting for another reason – it’s built on a Henry J chassis.  “Yes” this was often an excellent choice given that it had independent front suspension and a 100” wheelbase to boot.  Little if any frame modification was necessary.

But…you’ll see in the one photo….”track” or axle width has to be taken into consideration when using a Henry J frame with a body built for a 100” wheelbase.  The wheel spacing between the hub and the body has to be addressed – otherwise the gap between the tire and the body is inappropriate – as can be seen in the picture below of the rear axle of “Fiberflash.”

And this was a bit early for a Henry J chassis too.  Given that the Henry J debuted in the fall of 1950, not too many were available this early – the spring or summer of 1951.  But….the enterprising person could, I’m sure, find one if he really wanted too.

Let’s have a look at “Fiberflash” and check out the introduction of this special car to the American public in the summer of 1952.  And away we go… 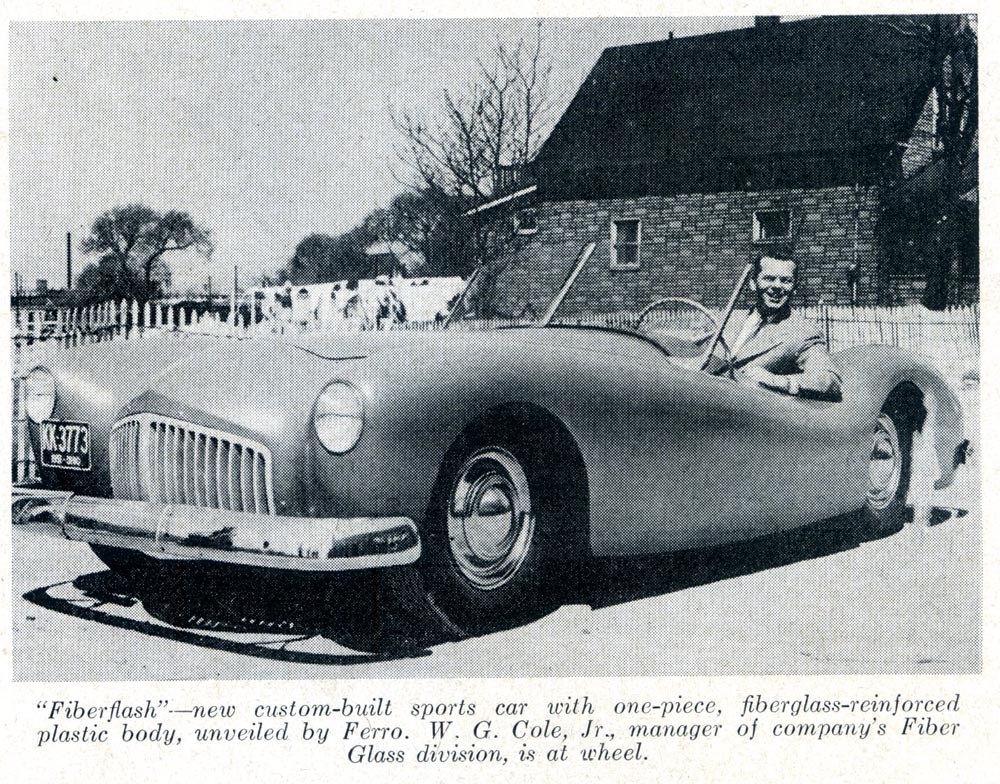 Weight of only 185 pounds, yet a claimed strength several times that of steel are features of the one-piece, fiber glass-reinforced plastic body of the “Fiberflash” – a custom built sports car.  The car was unveiled recently by Ferro Corporation, Cleveland, Ohio, leading manufacturers of porcelain and fiberglass products and industrial equipment.

The unusually light body is made of essentially the same composition as the new light armor suits worn in Korea by U.S. combat troops – an armor that will stop direct hits by a .45 caliber slug.  “Fiberflash” was built by John Campbell of Cleveland, for W. G. Cole, Jr., Ferro’s Fiberglass division manager.

The car body was designed and produced by Glasspar Company, in Santa Ana, California.  Campbell, who specializes in custom auto finishing, mounted the plastic body on a standard Henry J chassis, using the six cylinder engine with overdrive.

The engine has been moved back 20 inches and lowered 9 inches in the frame, with resulting low center of gravity that gives the car unusual cornering ability and hold on sharp curves.  While a great many frame and engine combinations might have been used, Cole said the Henry J was used because of its wheelbase and tread, which perfectly suited the Glasspar-designed body without modification.

Perhaps the most remarkable feature of the plastic sports car body, besides it 185 pound weight, is its almost incredible shock and impact resistance.  Although the body is less than a quarter of an inch thick, ordinary impacts fail to do more than mar the finish.  Only a major accident would result in damage to the car.  Since the entire body is corrosion proof, weathering salted streets or sea air will not cause rust.

In case of a major crash, a crack in the body could be quickly remedied with a handy repair kit.  Fiberglass and resin kits are purchasable with the auto.  “About 50 cents worth of material and less than an hour’s time could do the repair trick,” Cole declared.

Cole described the composition of the plastic body as “a combination of fiberglass mat and woven fiberglass cloth, impregnated with a polyester resin to mold the body in one piece.”  A new Ferro plant recently completed in Nashville, Tennessee, will soon start producing fiberglass for general industry under the name, Fiberglass Division, Ferro Corporation.

The plastic auto body is shipped to the builder with a coat of primer, ready for lacquering to the customer’s taste.  Complete with grill and windshield brackets, it sells for just under $700, at Santa Ana, and offers the opportunity of building up a well-designed sport car at a price comparable to the leading low priced cars.

The same body, if it were custom-produced in steel, would cost around $3000.  The plastic body measures 159 inches in length, and a width of around 66 inches without bumpers and trim.  Cole said that some indication of the strength and fatigue resistance obtained from body building with fiberglass reinforced plastic can be gleaned from the fact that other high performance equipment is made of the same materials. 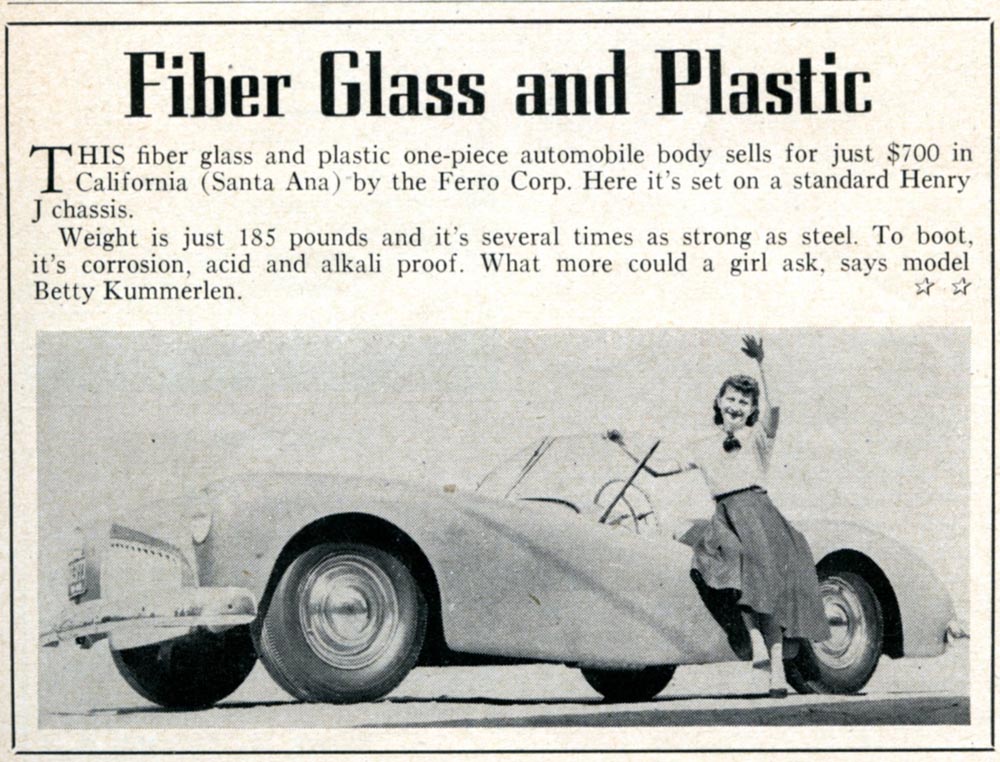 We found the following photo and caption years ago, and it has puzzled me up until finding the article in today’s story.  Here’s what the caption shared with readers back in 1952:

Fiberglass and Plastic:  This fiberglass and plastic one-piece automobile body sells for just $700 in California (Santa Ana) by the Ferro Corporation.  Here it’s set on a standard Henry J chassis.  Weight is just 185 pounds and it’s several times as strong as steel.  To boot, it’s corrosion, acid and alkali proof.  What more could a girl ask, says model Betty Kummerlen.

So now, based on the article in Automobile Topics we discussed in the first part of this article, the captioned photo in Speed Age magazine was close…but no cigar.  That is, it had errors in it.

The mention of Santa Ana, though, is accurate for Glasspar.  Glasspar was located in Santa Ana before moving to Costa Mesa….just next door.  Or more accurately, they expanded and for a while had both locations.

Glasspar with ID badges showing “Santa Ana” always mean built in 1952, while Costa Mesa badges have been found to be from car bodies built from August 1952 and later.  Just another tidbit of information – this was solved by Glasspar Guru Rodney Packwood (thanks Rodney!!!) 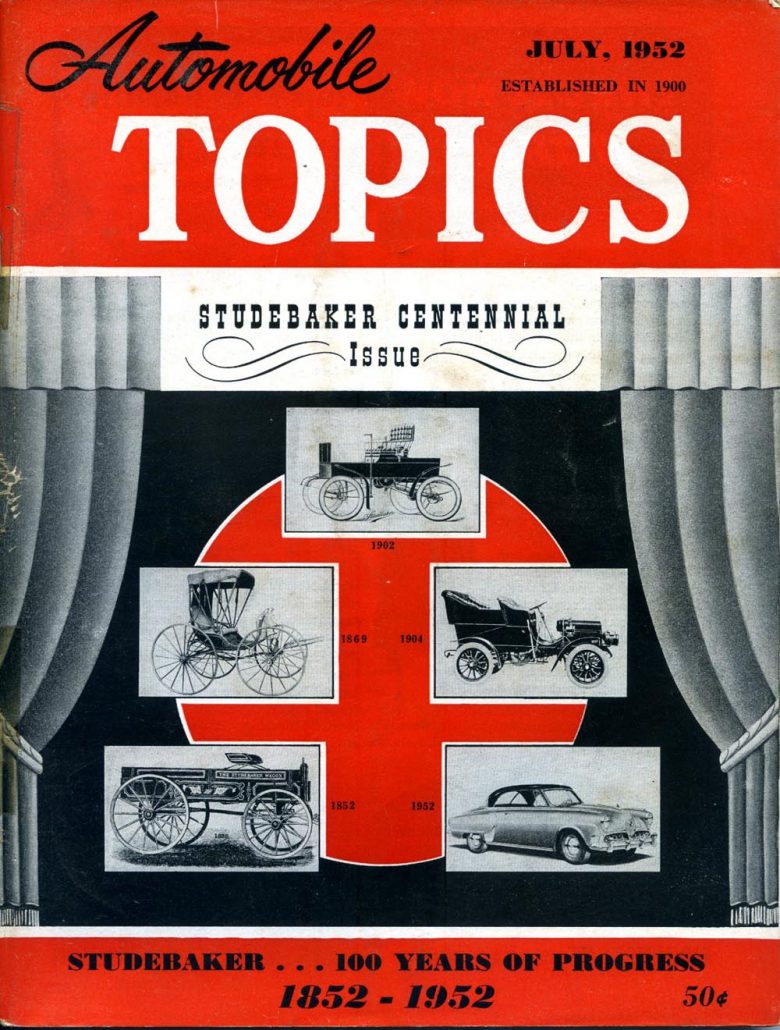 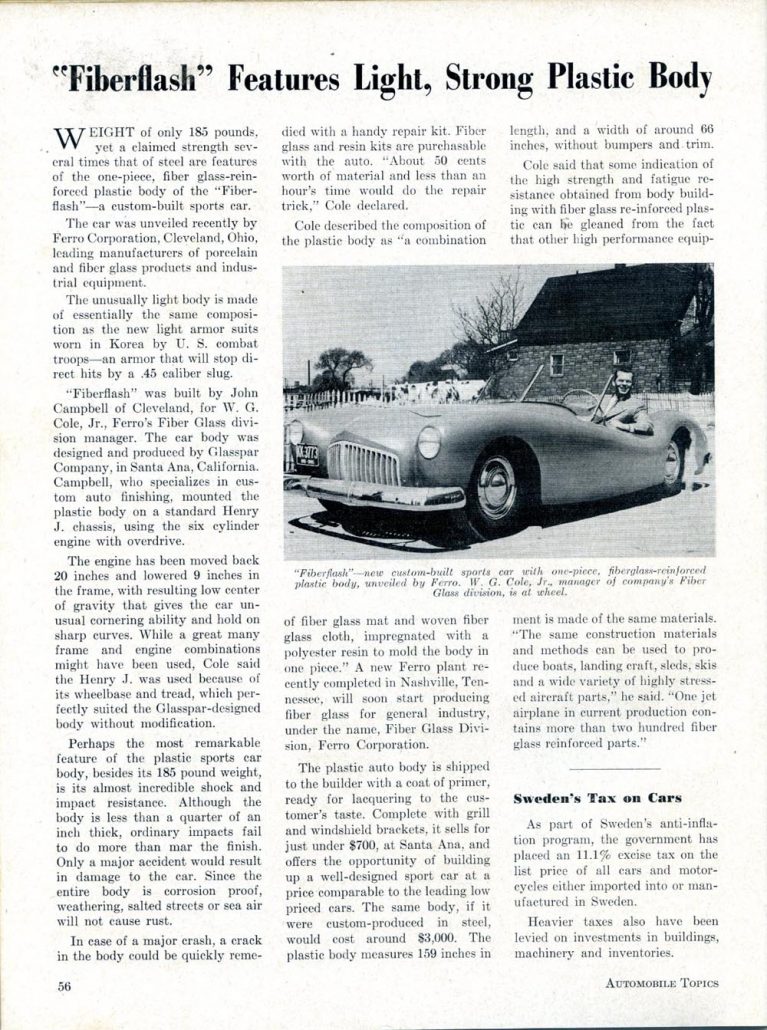 Most Glasspar G2’s were built out west – near the home of Glasspar in Costa Mesa, California.  So…it’s interesting to see such an early G2 being built in the Midwest.  So….since we don’t know where “Fiberflash” is today, we can posit that if a search begins in the Midwest….look for a Glasspar G2 that still is mounted on a Henry J chassis.

And what about John Campbell, the man who built it, and W.G. Cole – it’s original owner?  Could they still be around?  Are they in Ohio?  Anyone want to help locate these men and/or their families and tell the “rest of the story” to the audience here at Forgotten Fiberglass?

Maybe they even have the car.  So I challenge you out there….who wants to help research this early fiberglass car?  Finding “Fiberflash” could be an adventure in and of its own.  Keep us posted and good luck fiber-gang 🙂

I hope you enjoyed the story and as always…