For me researching cars began a long time ago – about 40 years ago to be exact.  I bought my first “classic car” when I was 14 years old – a 1955 Cadillac Fleetwood (with my mom’s approval of course).  That’s me driving it in the photo below. 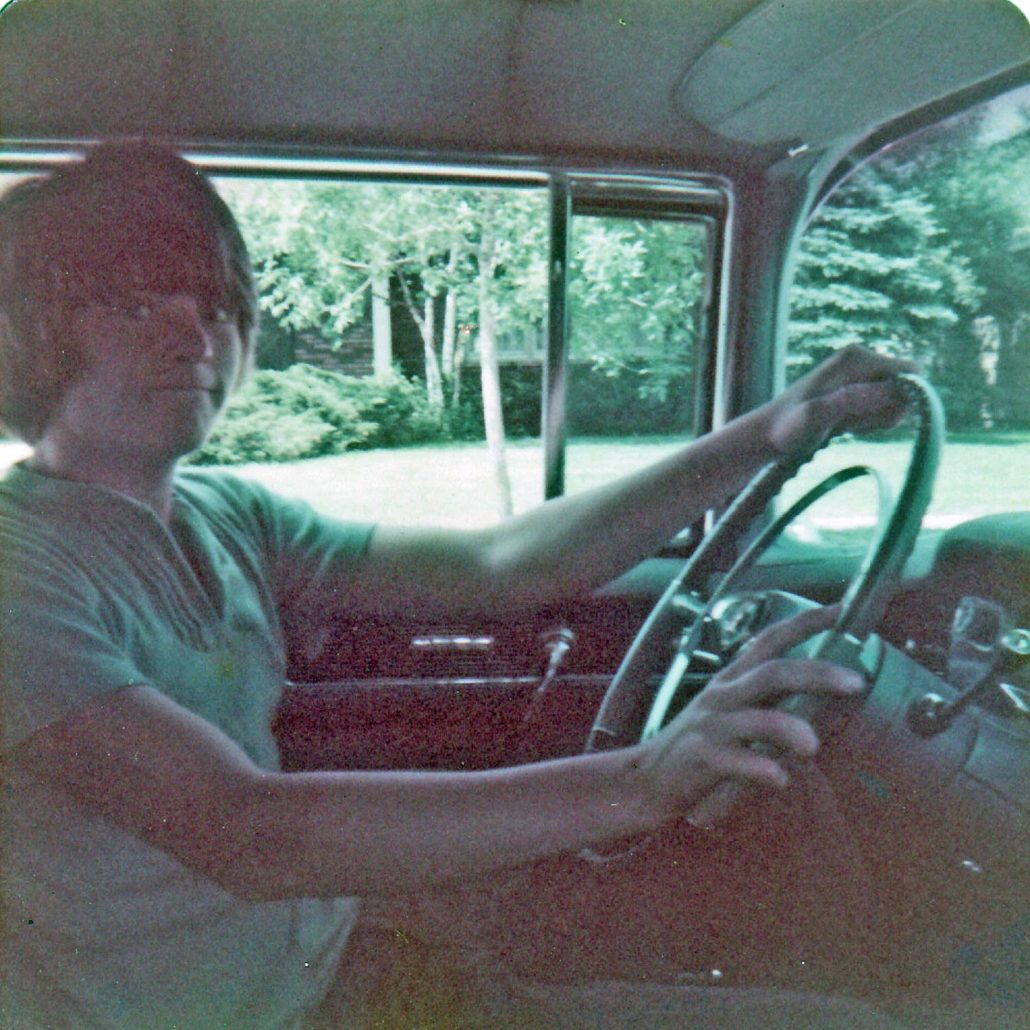 My grandfather, Morrie Hacker, worked for years selling new Chevrolets and in the summer of 1976 someone traded in their old ’55 Caddy.  Just $500 and it would be mine.  Sneaky adults….they knew I would have to get a job to pay for the car and restoration, but the trick worked.  No after school trouble for me.  Just car stuff.  I would spend the next 3 years restoring the Cadillac and finishing it – under the guidance of my grandfather Morrie Hacker and my antique car mentor Paul Terhorst – just before moving to Florida in the summer of 1979.  That’s when I got the research “bug.” 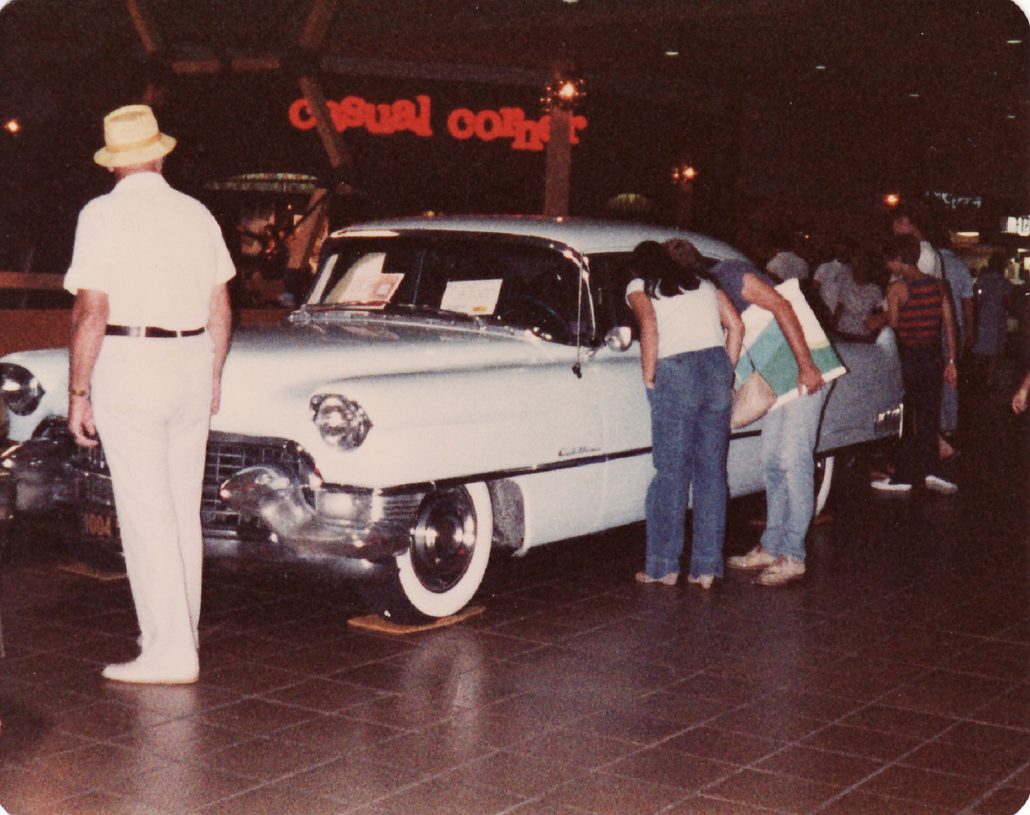 Showing My Restored 1955 Cadillac Fleetwood off at Countryside Mall, Clearwater, Florida in 1982

We moved to Florida in August, 1979 and within 90 days I had already found what would become my first fiberglass car – my 1962 Shark roadster.  It was sitting forlorn behind a small building in downtown Clearwater, Florida and within a year I had the chance to buy it – all $350 worth.  And I did – and still have it 40 years later.  Click here to read the story of buying my first Shark. 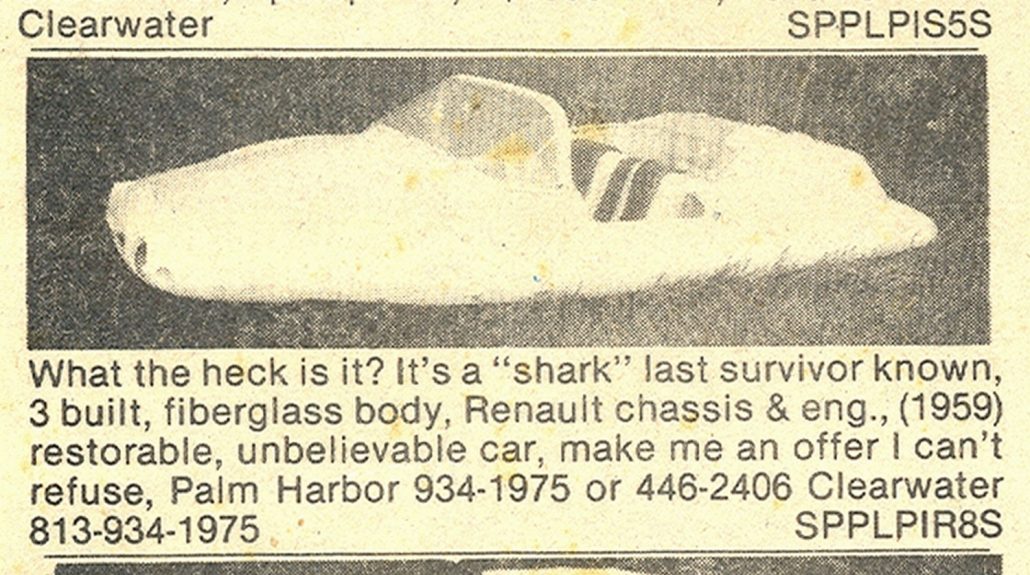 I was all of 18 when I got the Shark and soon thereafter I met Rick D’Louhy.  He helped immensely researching it and we turned into great friends over the course of the next several years.  It was during the research on the shark that I learned its full history.  Most importantly, I learned about the history of the first Shark Coupe – the 1961 Covington Tiburon coupe built by Henry Covington.  I would often wonder what happened to the car – maybe it was just a few miles away.

I didn’t know it then, but my answer was exactly right.

So you have a car or two and your still a teenager – where do you keep your cars?  At your mom’s house of course.  Even back as far as the early 1980s my mom’s house (and now a different house where I now live) has always had unusual cars in front of it.  Here’s a photo below of the Shark in front of my mom’s house circa 1980. 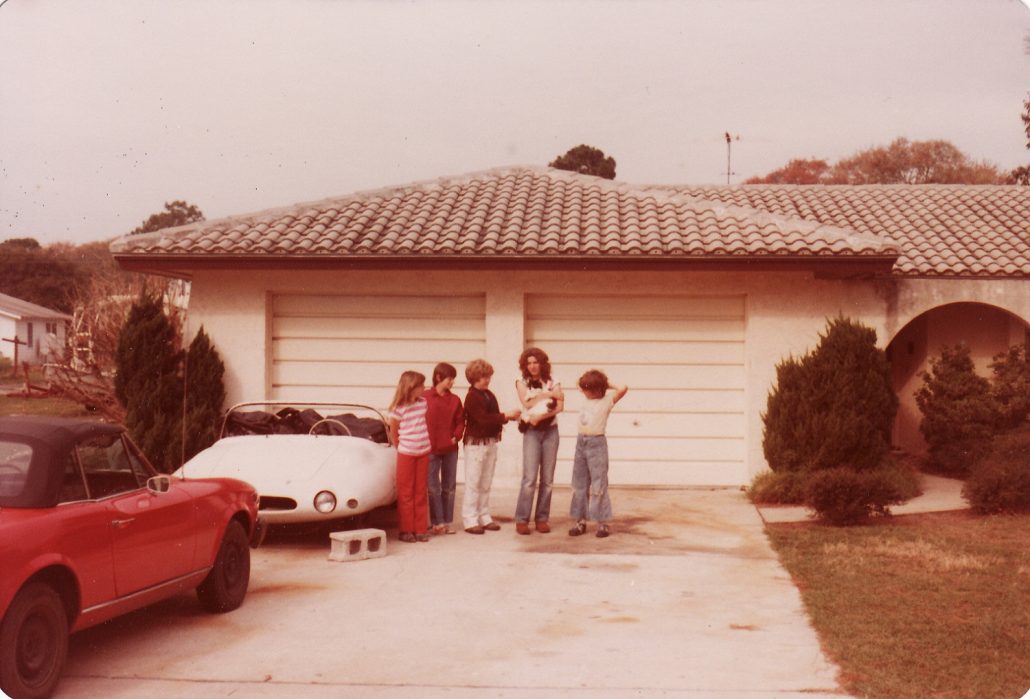 It’s funny….to this day if I drive an old car over to my mom’s house (she still lives there), people will sometimes stop by and reminisce about the old cars they remember being there.  I guess they don’t know of my new house not too far away in Tampa, Florida and the “car guy” reputation it’s getting.  See photo below. 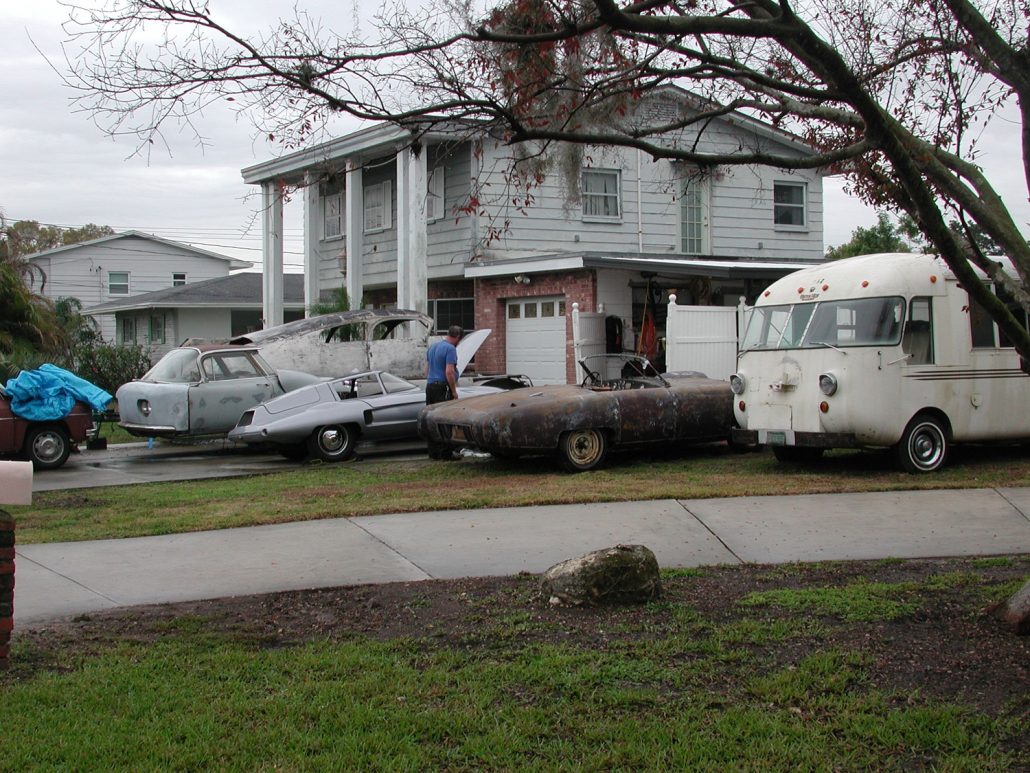 Taken a few years ago. Out front is my 1937 Gougeon Streamliner, 1959 Moon Transporter, 1961 Tiburon Coupe, 1954 Chicagon Concept Car and an Ultravan I was toying around with. You should have seen what was BEHIND the fence *wink*

Back in the 80s, I only had a couple of cars in front of my mom’s house, and one of those was the Shark roadster.  And not too long after I had moved it there, a police officer stopped by and wanted to discuss the car.  It turned out he was a car guy too and his name was Al Lendzian.  Al had found a car similar to mine on one of his neighborhood patrols, and wanted to know if I was interested in seeing it.  Can you image how a 20 year old “Geoff” must have felt when Al asked?  I wanted to jump in his police car right then and there.  Take me away.

That weekend, Al came over to my house and we traveled down to Largo, Florida to see the car.  Rick D’Louhy joined us for the trip.  It was a short trip – about 30 minutes – so I took my brother Josh along with for the ride and the adventure.  My family has always been involved with cars so he jumped right in.  I had wondered what shape the Shark would be in and Al told me “not good.”  The car at one time had been beautiful as shown by the photo below.  Click here to see a 1961 Road & Track magazine article about the Shark. 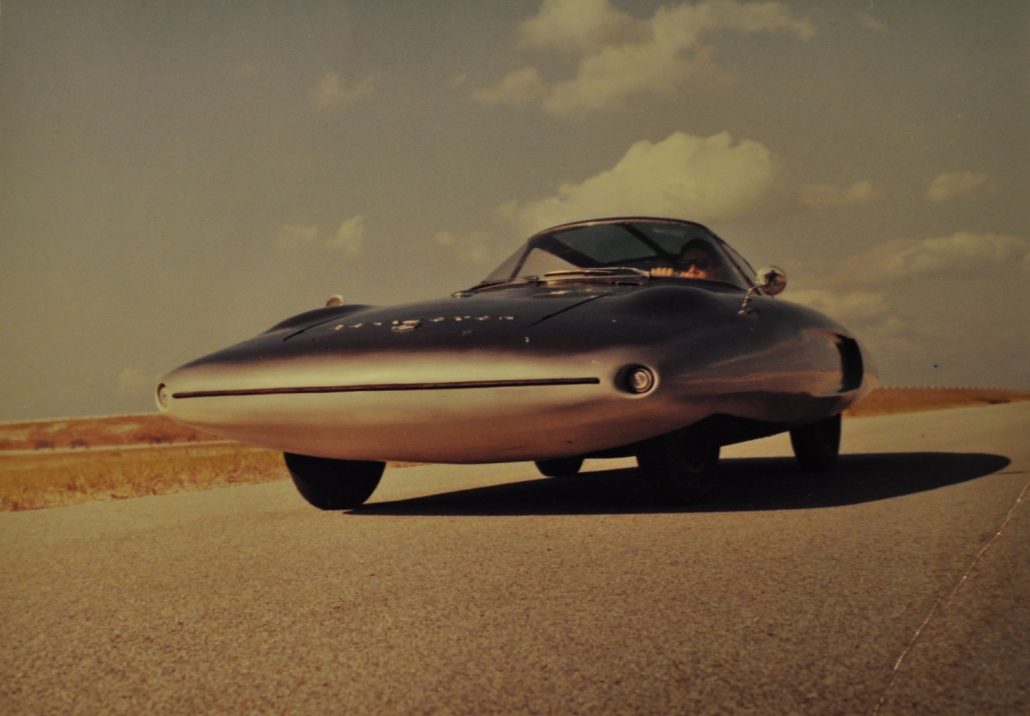 Photo From 1961 Taken For Magazine Article

But Al Lendzian was right – the Shark had survived but not very well.  Let’s take a look at the photos taken that day – by Rick D’louhy. 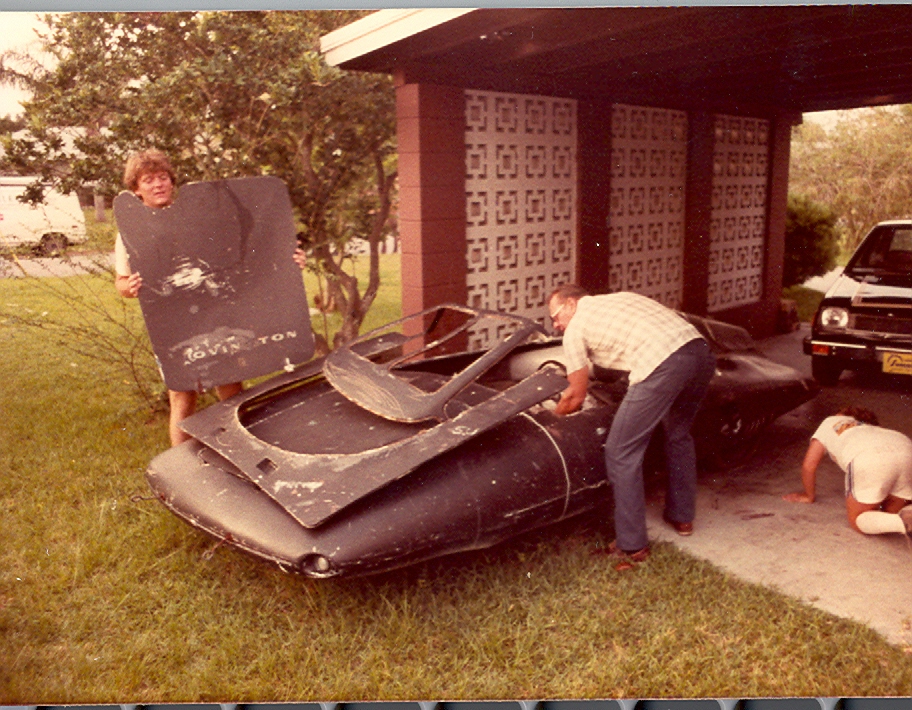 I’m Holding Up the Hood, Al Lendzian is “at the wheel” and my brother Josh is checking out the back of the car. 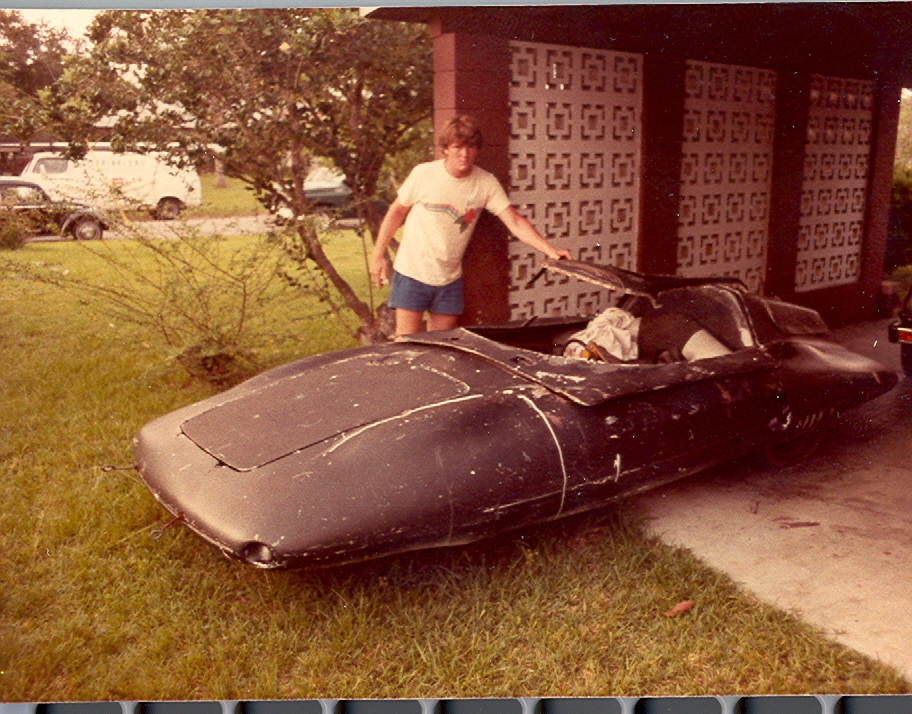 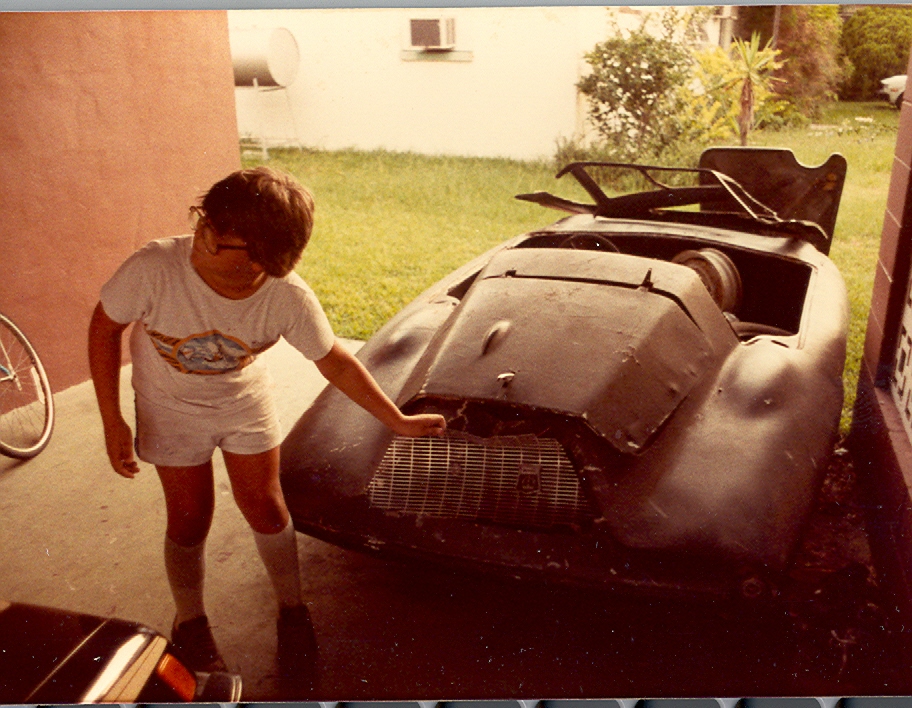 My brother Josh holding up the rear grill in place. 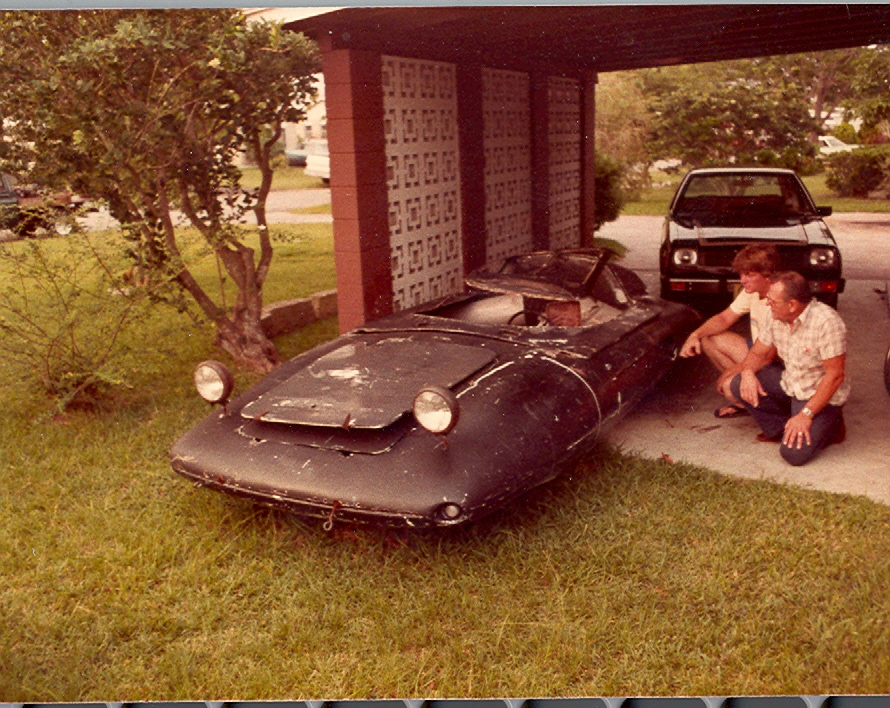 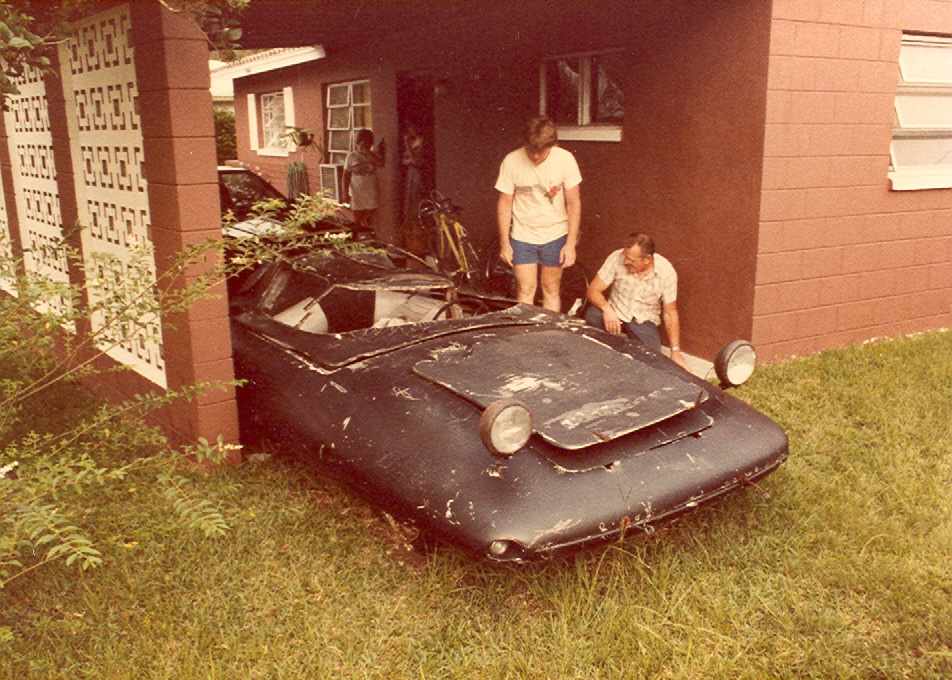 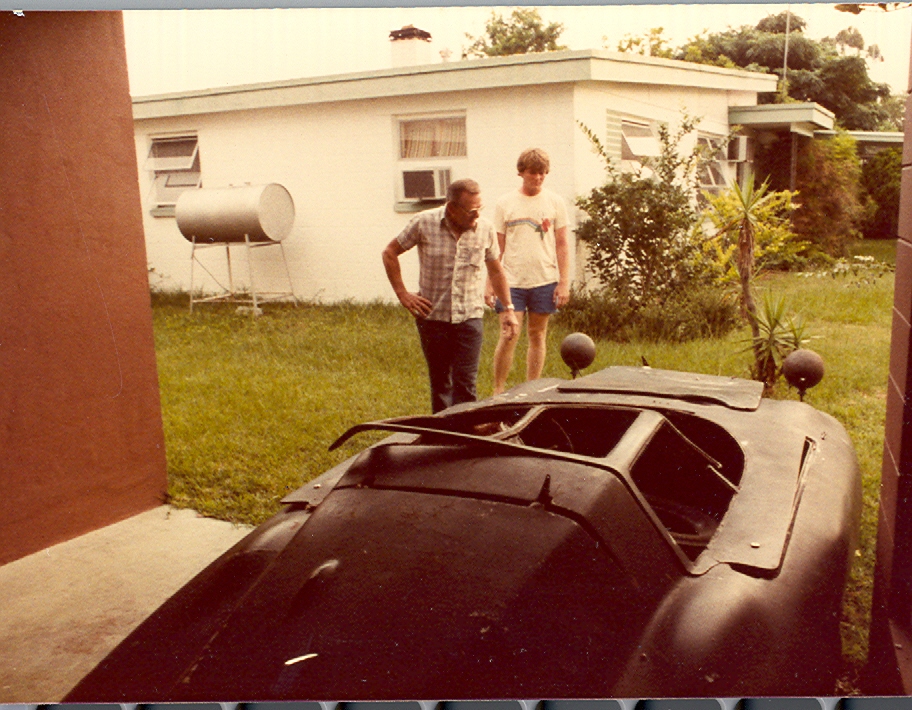 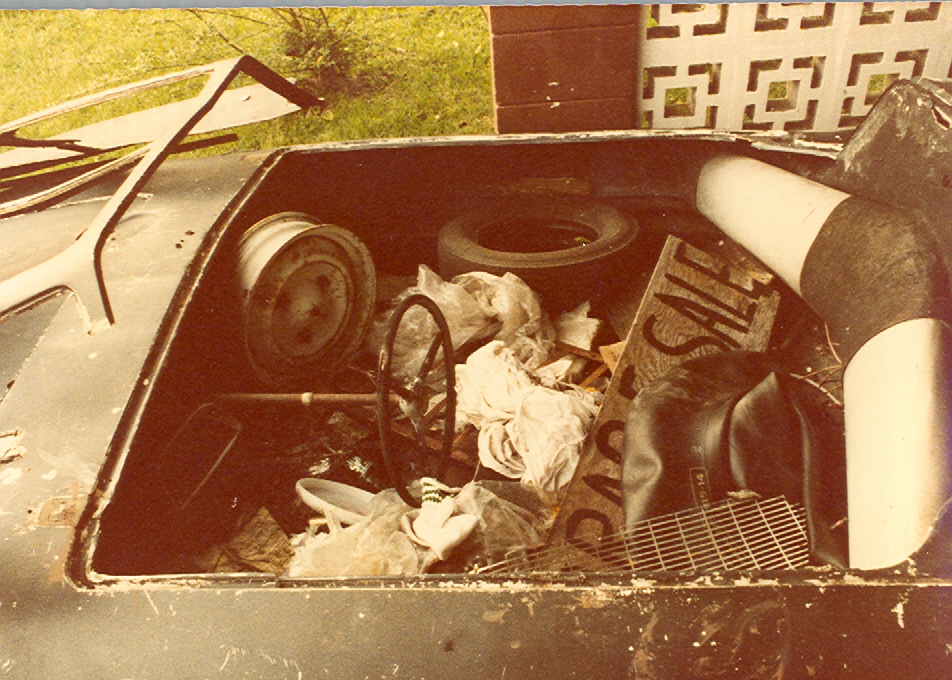 Who, What, Where, When and Why

It turned out that the Covington family still owned the car back when I found it in the early 1980s.  Brothers Jim and Jon Covington, owned it and they were very nice in helping me learn more about my car and the history of their father’s car too.  Our visit kindled a fire under Jim Covington and shortly after our visit he moved the car to a shared workshop of his.  Sadly, the remains of the car were disposed of several years later, so the fate of Covington Tiburon #1 is known and the car is lost.  But sometimes opportunity shows itself in other areas – it would just take 25 years to find it. 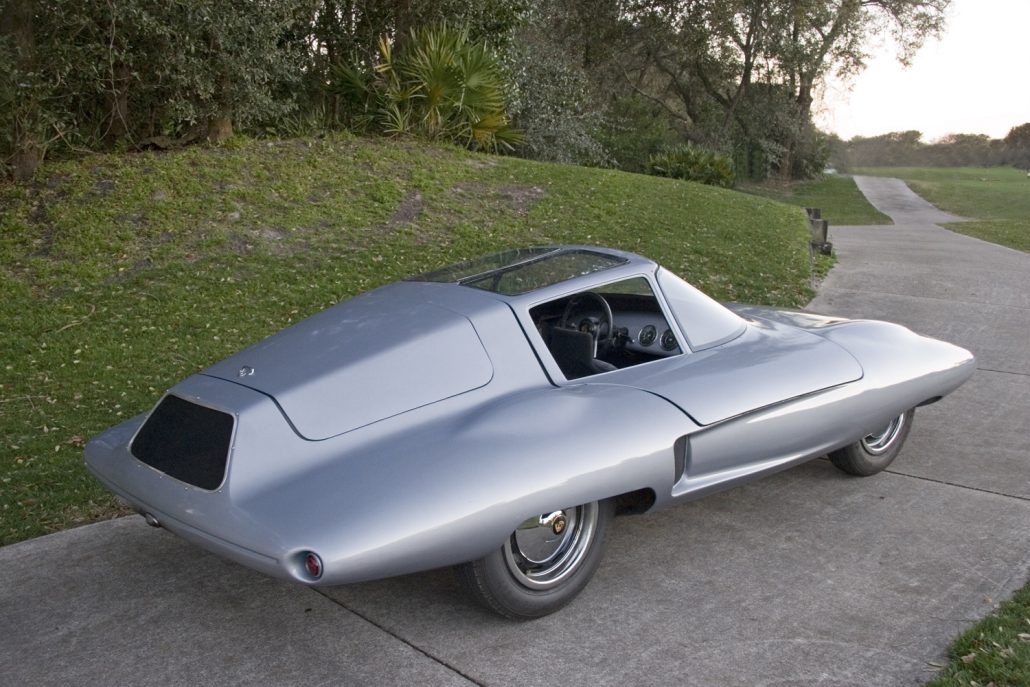 Our 1961 Covington Tiburon Coupe at the 2009 Amelia Island Concours d’Elegance.

Those of you who know me appreciate my tenacity, and know that the story on the Shark didn’t end there.  It actually started.  Twenty-Five years after acquiring my first Shark Roadster we found and acquired a nicely preserved Shark Coupe built by famed customizer Gene Winfield for his sports car customer – Eldon Rosenow.  And while we’ve had fun with this Shark Coupe over the past 15 years, we are now set to have some NEW fun with it.  That is, we’ve created a mold of it and are now ready to take today’s story full circle and bring to life a new Covington Tiburon Shark in the near future. 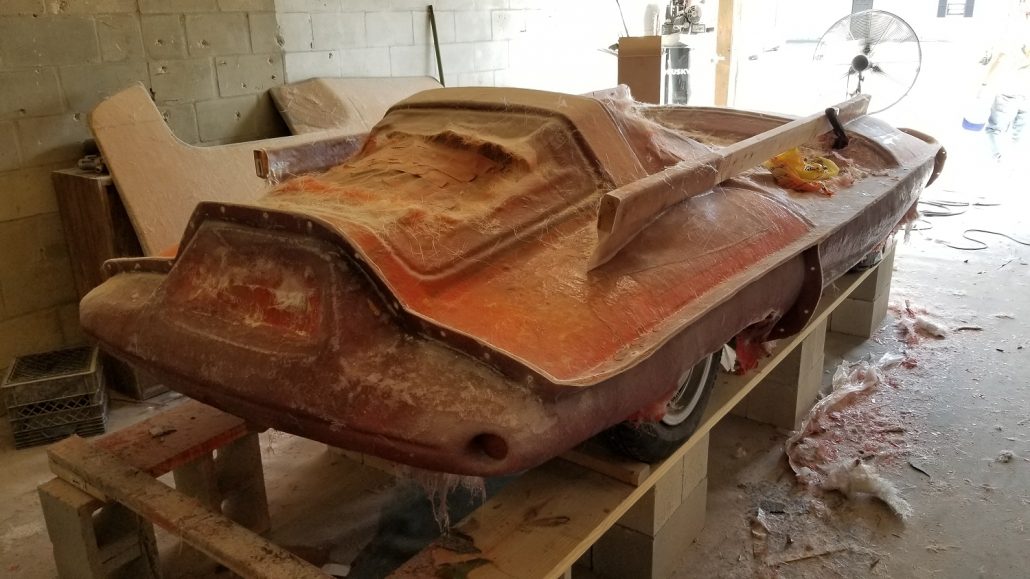 The Tiburon Mold is Complete and Good to Go. A New Covington Tiburon Will be hitting the streets in the near future.

So I was 18 when I bought my first Shark Roadster and I’m 58 now and on the precipice of creating a new Tiburon Coupe.  Anyone interested in being the owner of the first new Tiburon to hit the streets in nearly 60 years?  Our home office in Tampa, Florida is a fun place to be if you’re a car guy.  Be sure to call us and stop by sometime and say “hi.”  No rest for the weary down here 🙂

I’ve always liked restoring cars and I still do today.  It’s not about the size of the project – it’s about the design and the history of the car.  That’s what creates excitement – especially if the history is lost and can be brought back into the automobile history “fold.”  What could be more fun? 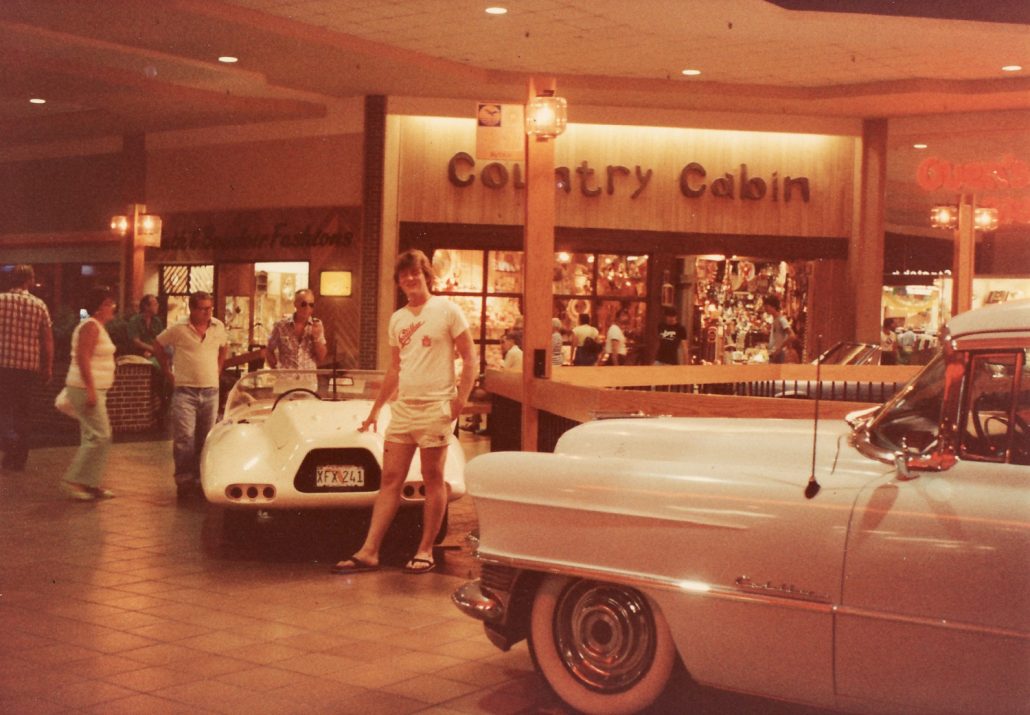 On the left is my restored 1962 Shark and on the right is my restored 1955 Cadillac Fleetwood. But the best part of this show was driving my cars through the mall – just like they did in the Blues Brothers movie which I had seen a few years before this photo was taken. I love mall shows!