Here’s an interesting time capsule that was sent in to us from Bill Quirk – foreman for Victress Manufacturing in the 1950s and early 1960s.  While the article is about the culture of hot rodding in the San Fernando Valley of California and beyond, the photos in the article and the detailed captions talk about two Victress employees – Bill Quirk and Bill Powell and their “hot rod” activities in southern California and with Victress Manufacturing.

Have fun with the article and be sure to read the detailed captions for all photos.  I’ve retyped the full article here to make it easier to read online.  The article really gives you a window in looking back in time to 1954 and what was happening in building and racing your own car across America.  At the bottom of the story I’ve shared a full scan of the article and close up of the words as reference. 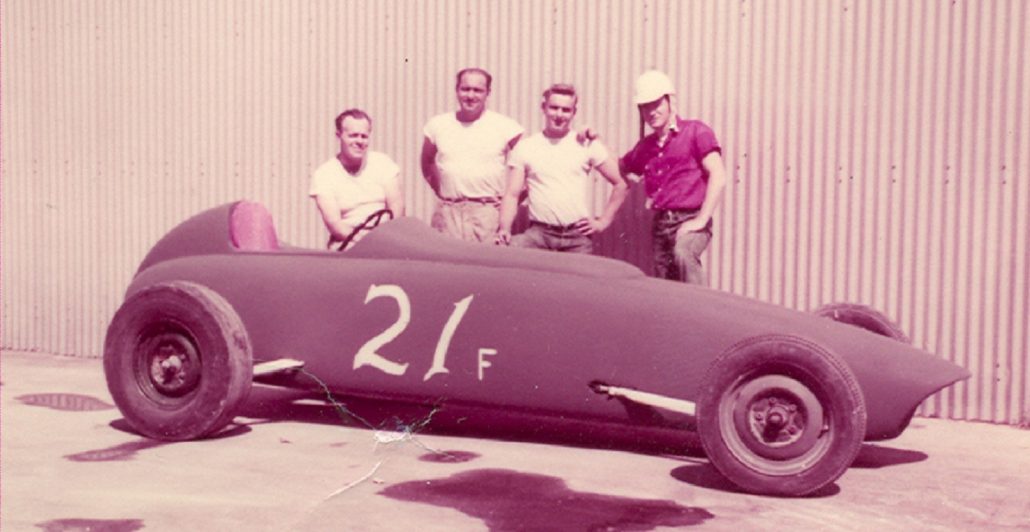 Caption: This is the dragster referenced in the article – built at Victress and offered as a body at the time too. From left to right is John Corwin, Doc Boyce-Smith, Bill Powell and Bill Quirk with helmet and red shirt.

San Fernando Valley may be one of the nation’s most active hot rod centers, early results of a San Fernando Valley Times survey indicated today.  Although this area has long been believed to be an advanced area in the sport, it has been extremely difficult to ascertain the exact number or nature of the clubs active in the Valley.  It is now clear, however, that previous estimates fell far short of the actual activity.

The Valley Times survey, currently under way, indicates the total number of hot rodders here may exceed 2500.  National membership of NHRA, the country’s largest hot rod organization, earlier this year was reported at 18556.  Valley car clubs may exceed 100, according to the survey, which in approximately two weeks located 80.  Popular Mechanics Hot Rod Handbook, however, lists a total of only 92 clubs for the entire state of California – and only nine clubs in the Valley. 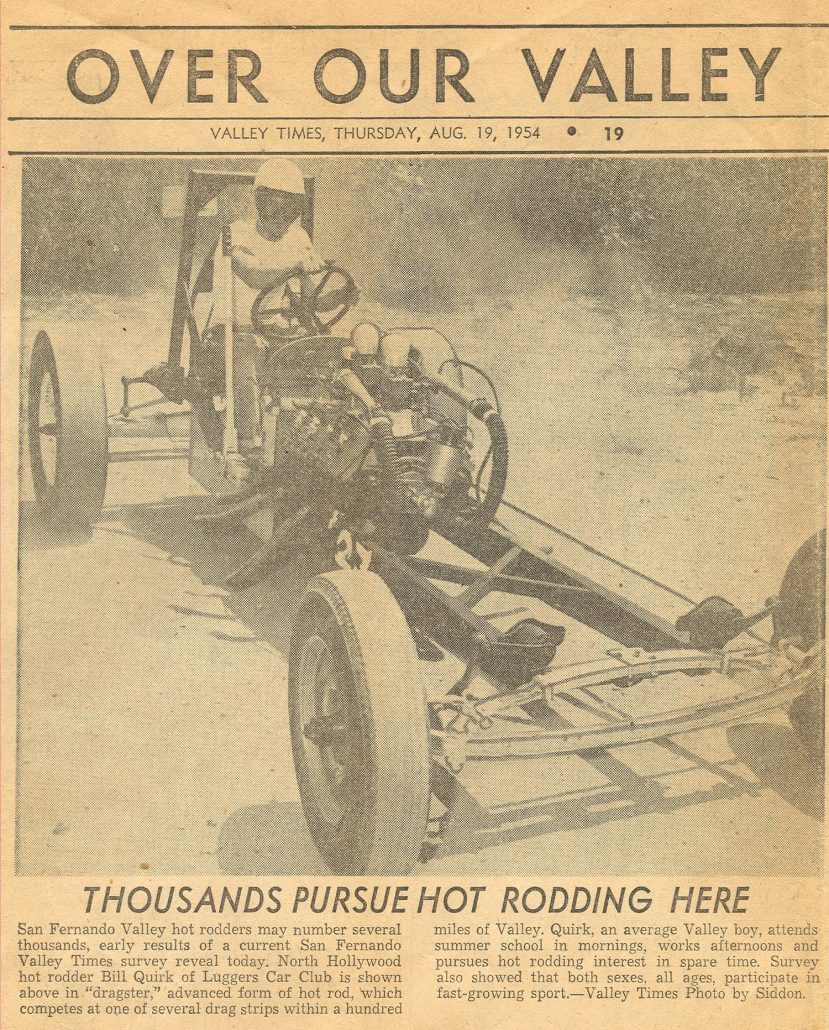 Many factors contribute to the difficulty encountered in attempting to locate individuals and clubs participating in the hot rod sport, which in many instances has taken on the characteristics of an underground movement.  The outstanding factor, probably, despite the good public relations work that NHRA is doing throughout the nation, is that hot rodding is still one of the most maligned, misunderstood and unappreciated sports in America today.

It is a paradox that although virtually all California police departments recognize hot rodding for what it is today – a legitimate sport – many schools frown on the formation of car clubs and more fail to encourage what undoubtedly might become one of their most constructive extra-curricular activities. 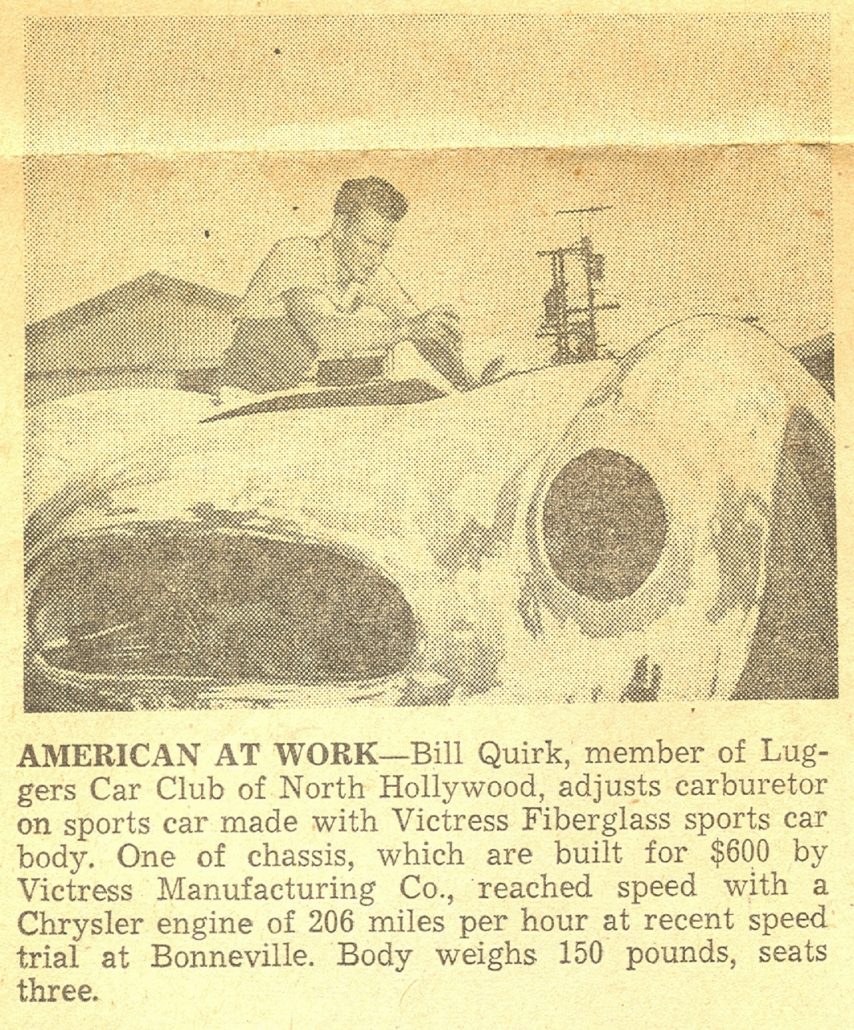 Caption: Bill Quirk, member of Luggers Car Club of North Hollywood, adjusts carburetor on sports car made with Victress Fiberglass sports car body. One of chassis, which are built for $600 by Victress Manufacturing Company, reached speed with a Chrysler engine of 206 miles per hour at recent speed trial at Bonneville. Body weighs 150 pounds, seats three.

Hot rodding, according to NHRA, is “a manifestation of the originality that is inherent in most young Americans.”   Elaborating on this theme, NHRA shows how the hot rod sport is based upon the qualities that made America great.  “It is indicative of the ever present desire to improvise and improve.  It is a mirror of the inventiveness and ingenuity possessed by so many American boys.  It is a reflection of the love of competition and, in that light, assumes many of the elements that buttress our cherished ideals of free enterprise.”

Most hot rodders possess a certain degree of derring-do.  This quality, if turned into wrong channels can be dangerous and evil.  Yet, it is this very spirit, this love of speed, power and mechanical knowledge which makes American fighter pilots the best in the world.  It is this spirit – or attitude, if you prefer – which gives us the finest armored divisions.  The elements which make up an enthusiastic hot rodder are those most sought by the heads of our Air Force and Army.

The real hot rodder is an experimentalist. He is perpetually dissatisfied with the status quo.  He seeks and gets improvement. He and his fellows, in the wise, constitute a tremendous pool of technical know-how on which American industry may draw at its convenience. 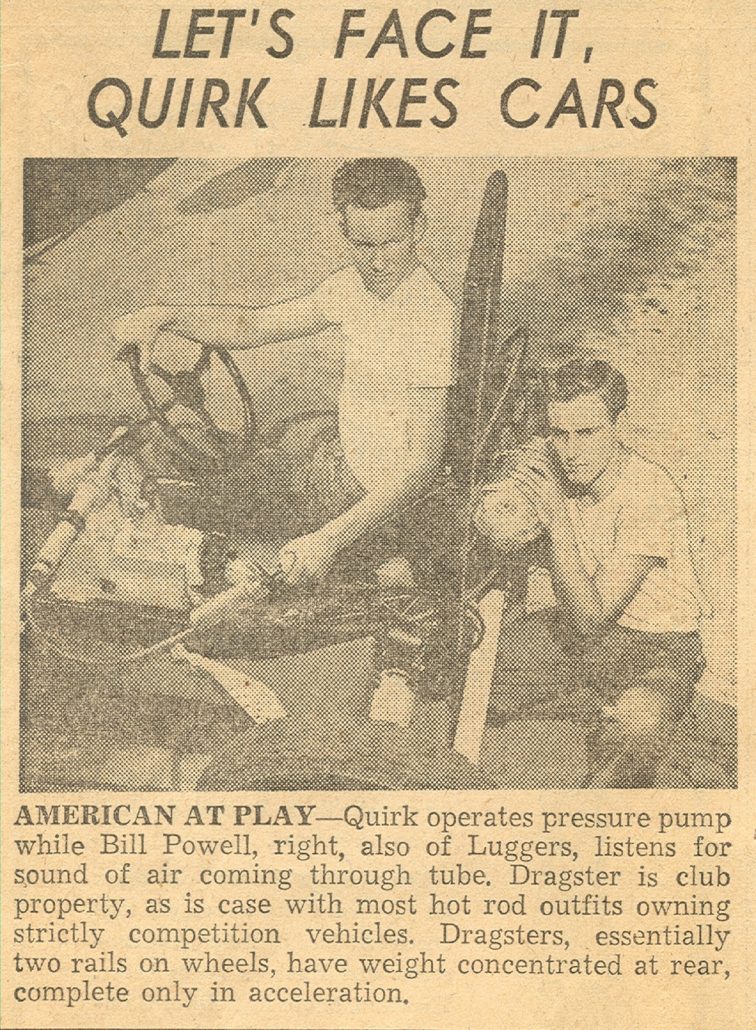 Caption: American At Play – Quirk operates pressure pump while Bill Powell, right, also of Luggers, listens for sound of air coming through the tube. Dragster is club property, as is case with most hot rod outfits owning strictly competition vehicles. Dragsters, essentially two rails on wheels, have weight concentrated at rear, compete only in acceleration.

Hot rodders are not pure scientists or researches.  They are inspired in their hobby by the zest of competition.  When they create something, they want to see how it works.  The by-product usually is speed.  The indulgence in speed is the spice that stimulates them in their technical endeavors.  The National Hot Rod Association insists that speed in itself is not evil.  They argue that organized speed events, conducted under safe, supervised auspices, provide the answer.  They point to what has been accomplished in California, Texas, Illinois, New York and Ohio to prove their point.

In these areas, it has been shown that hot rodding is quite a wonderful thing. It has been demonstrated that an 18 year old, working on his car night after night in his garage at home is not nearly so much of a social problem as the 18 year old who spends his idle hours in pool rooms or loafing around street corners.

The hot rod virus bites deeply.  It becomes a sport, hobby and avocation all rolled into one.  Adult guidance and assistance can make it a constructive enterprise.  Unfair criticism, intolerance and mis-understanding serve only to create bitterness and to drive a perfectly legitimate activity underground.

Hot rodding is a facet of American life and, if properly controlled and regulated, a very healthy and important facet with many constructive elements deriving therefrom. 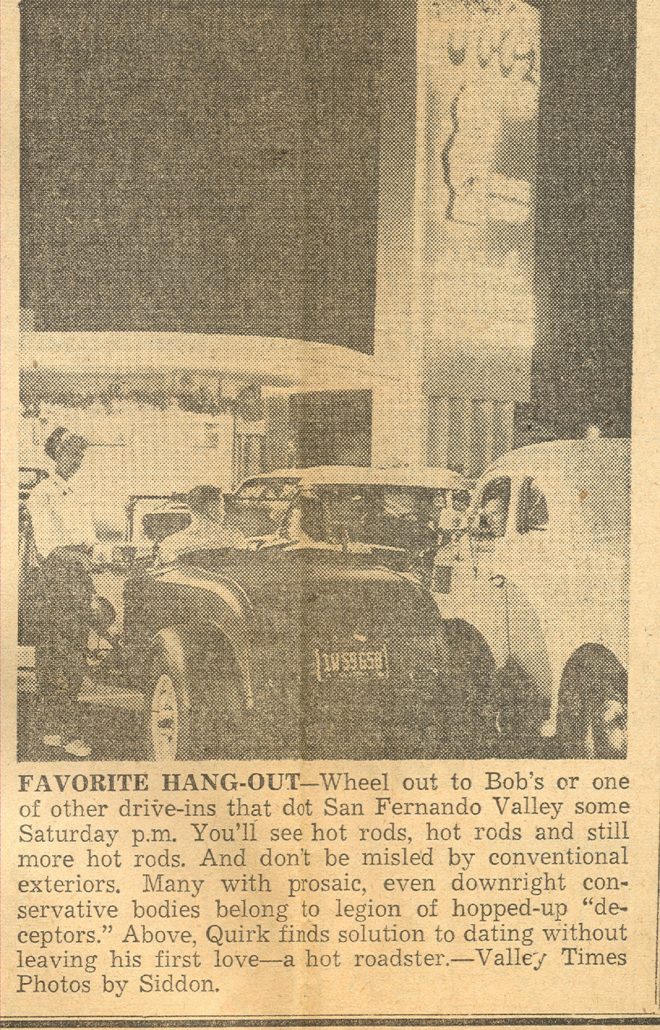 Caption: Favorite Hangout: Wheel out to Bob’s or one of other drive-ins that dot San Fernando Valley some Saturday pm. You’ll see hot rods, hot rods and still more hot rods. And don’t be misled by conventional exteriors. Many with prosaic, even downright conservative bodies belong to legion of hopped-up “deceptors.” Above, Quirk finds solution to dating without leaving his first love – a hot roadster. Valley Times Photos by Siddon.

The article indicates at the beginning that it was the “First of Series…” of stories.  I’ll have to do a bit of searching but maybe we’ll find the other articles that followed in this series on hot rods.  Maybe Bill Quirk will find another box of history out there in California that might reveal the lost articles?  We can hope and wait and see 🙂 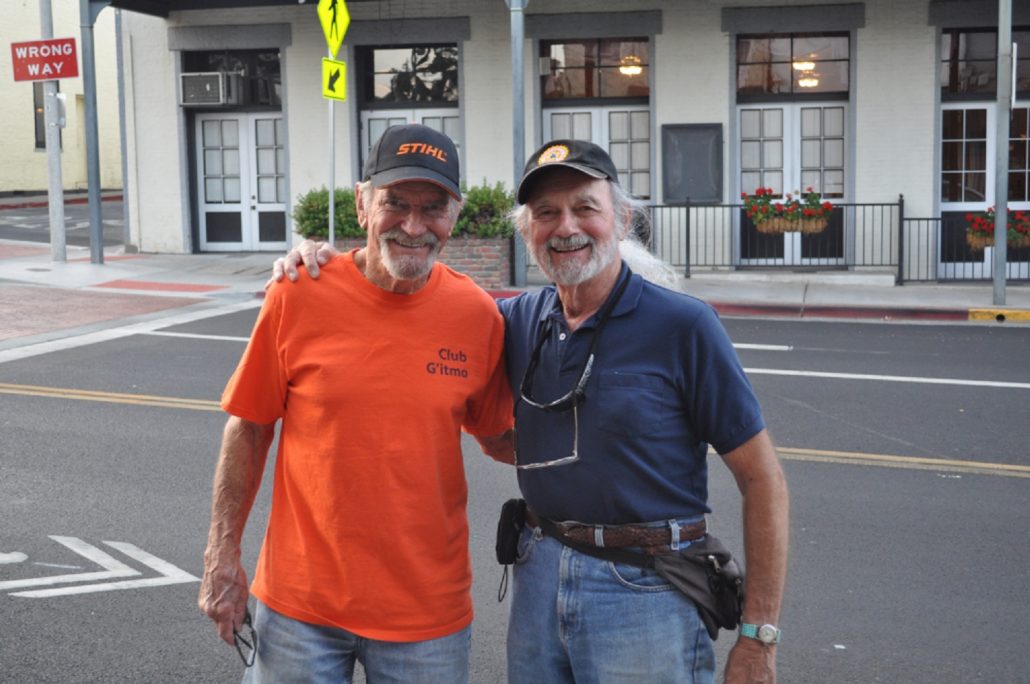 Bill Quirk (Victress Foreman) on left and Merrill Powell (Victress co-owner) on right. Photo taken in Nevada City, California in 2015 during a visit to pick up the “1957 Galileo Special” – but that’s an entirely different story. 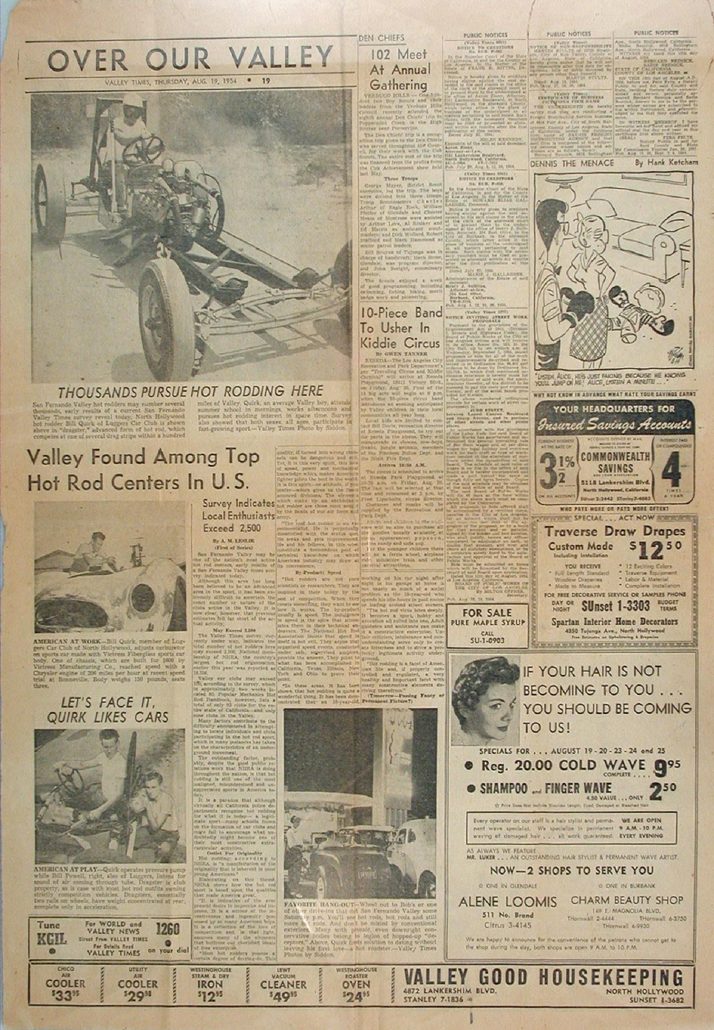