Back last fall we surprised all of you by sharing the debut of Robert O’Meara’s Allied “Cisitalia” Roadster at the 2014 Watkins Glen Vintage Festival courtesy of photos provided by good fiber friend Jeff Brown.

Well as we all know, there’s always a backstory and in this case – one told expertly by owner/restorer Bob O’Meara.  Bob has offered to write a two-part story on his car, and one that I enthusiastically share the first part today.  So let’s have at it and let Bob take off at the wheel.  And away we go 🙂

This car is known as the “Mickey Thompson/Bill Burke MG/Cisitalia Special” or “Talia” as we have named her – yes, a feminine name – just look at the lines of the rear end…..don’t you just want to touch it……?  The body is a fiberglass reproduction of a 1946 Cisitalia 202 Roadster and was built by Mickey and Bill back in 1952. 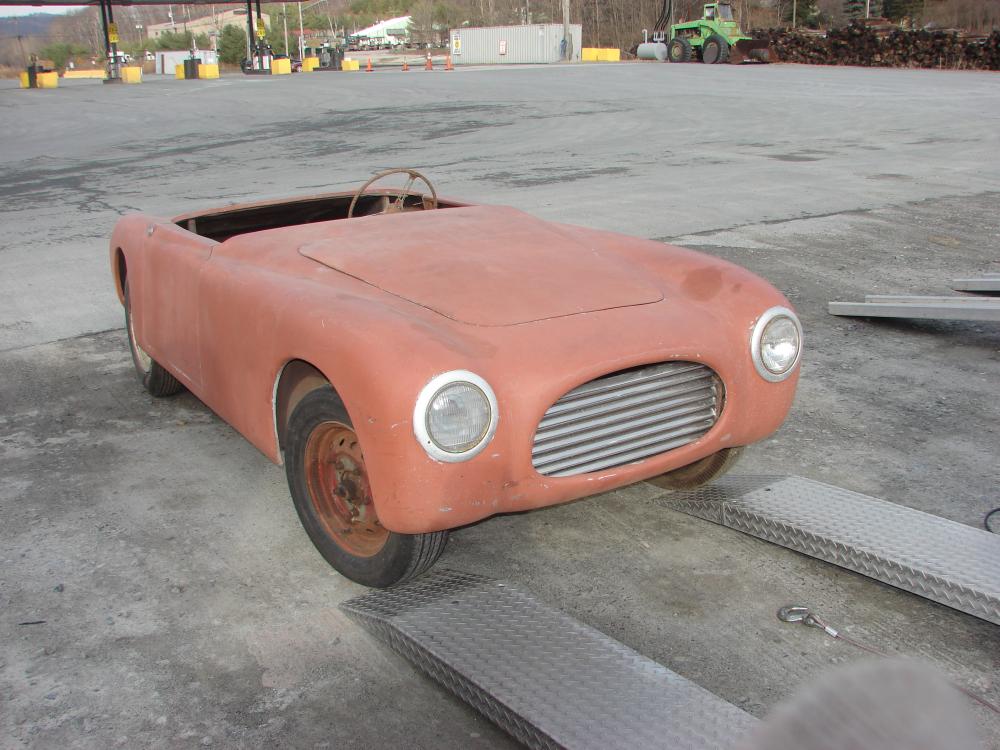 These 2 pictures show the car as purchased by Bob O’Meara. Note the general condition of the fiberglass, the lines of the car and the ”trunk” area, which is non-existent; there is no trunk lid because the body has been made in one molded piece except for the doors and hood.  Note the sunken trunk area from years of storage and perhaps weight on it – this will have to be fixed and a trunk lid installed somehow – good luck with that – fitting the lines of the car. 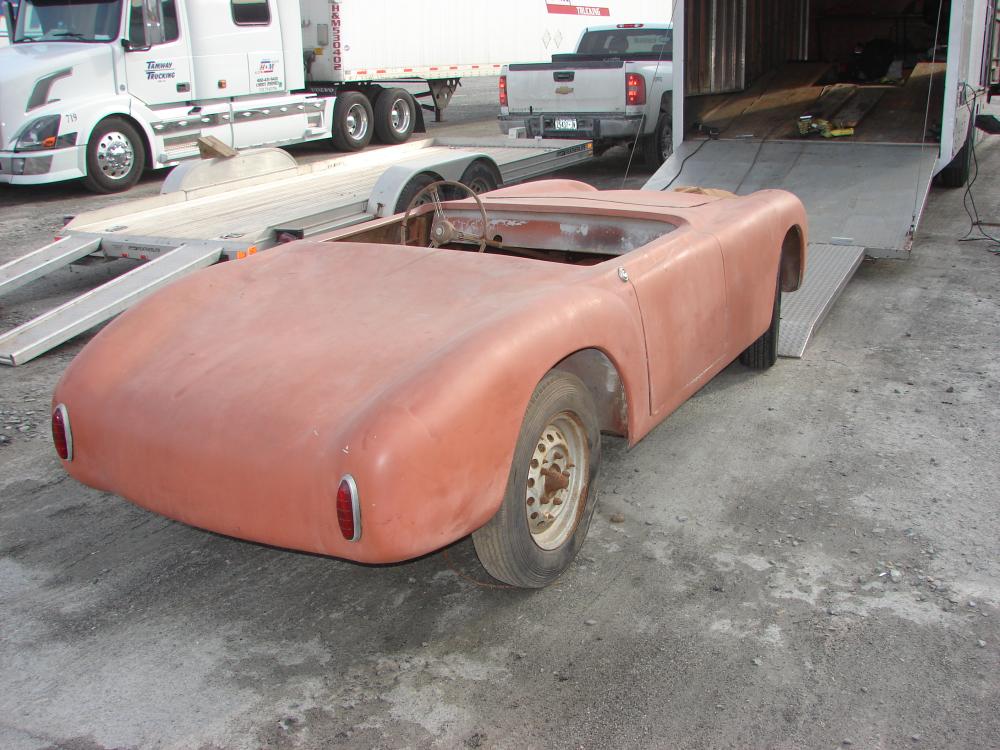 As the story goes, their friend Bob Petersen, of magazine and Museum fame, had purchased a ’46 Cisitalia Coupe in Boston back then and had it driven to California.  When they saw the car, they thought it was beautiful, and it would be a great idea to make copies of it and sell the bodies for racing on T-Series Chassis and small Fords.

They had no idea that the coupe model of thihs car would later become the first and only car to be on permanent display in a Museum of Modern Art (NYC). 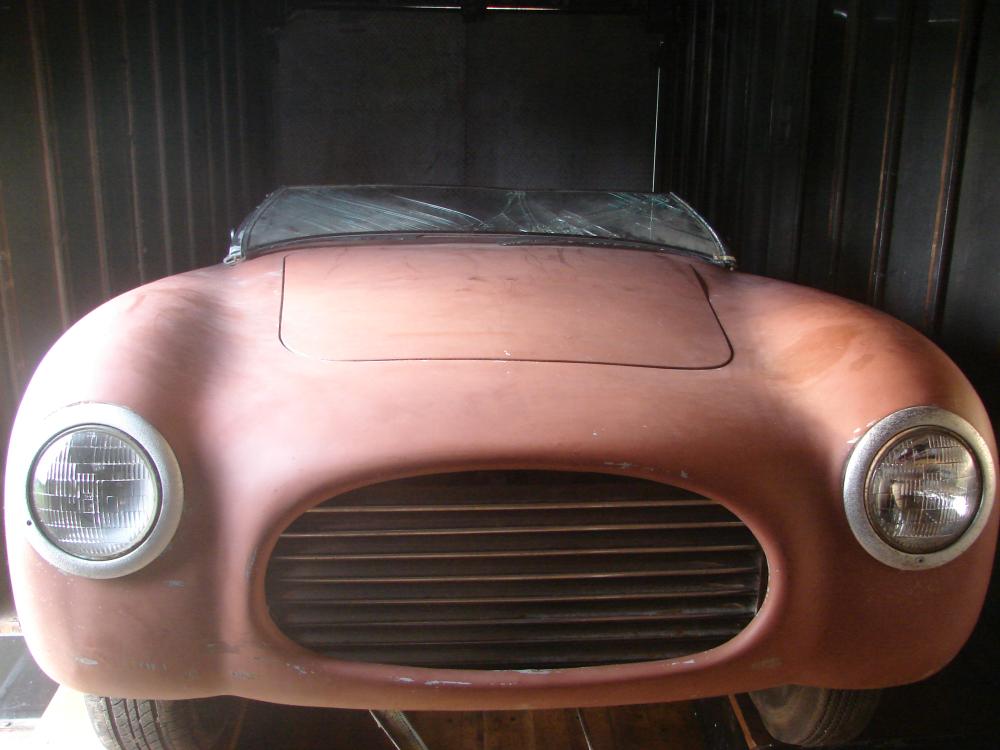 The car in my car carrier with an Austin Healey 100 windshield laid upon it – I originally liked the lines of the car, but this is the moment that I knew I had something really special – the windshield, shattered as it was, still made the car look amazing! Yes – this would be worth it!

They produced about 40 coupe bodies (large and small), of which there are about 15-20 known to exist today.  This car is one of the few roadsters known to exist today.  It had been “lost” and fortunately in storage for nearly 60 years in barns, (an “actual” barn find!) and when I got it some years ago had hay etc. in it. 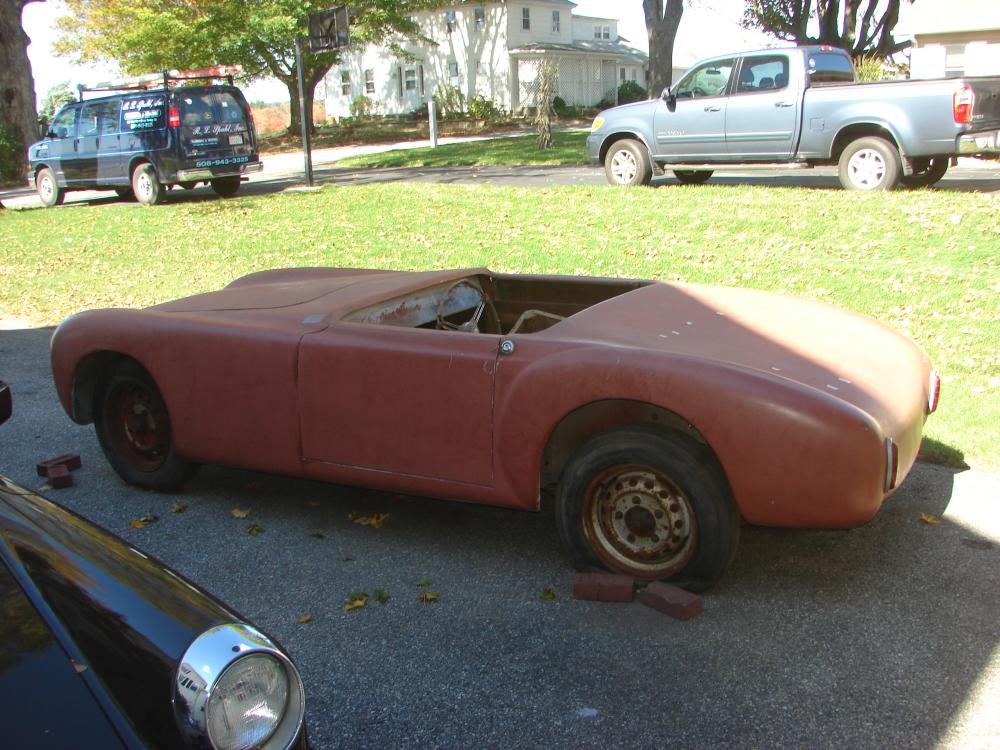 These are three shots of the car in my driveway awaiting restoration/build; there’s no question that one needs a LOT of imagination in approaching a job like this!  Notice how high the body is on the suspension, and it has an engine in it, and not much else – but the general condition of the body is good. 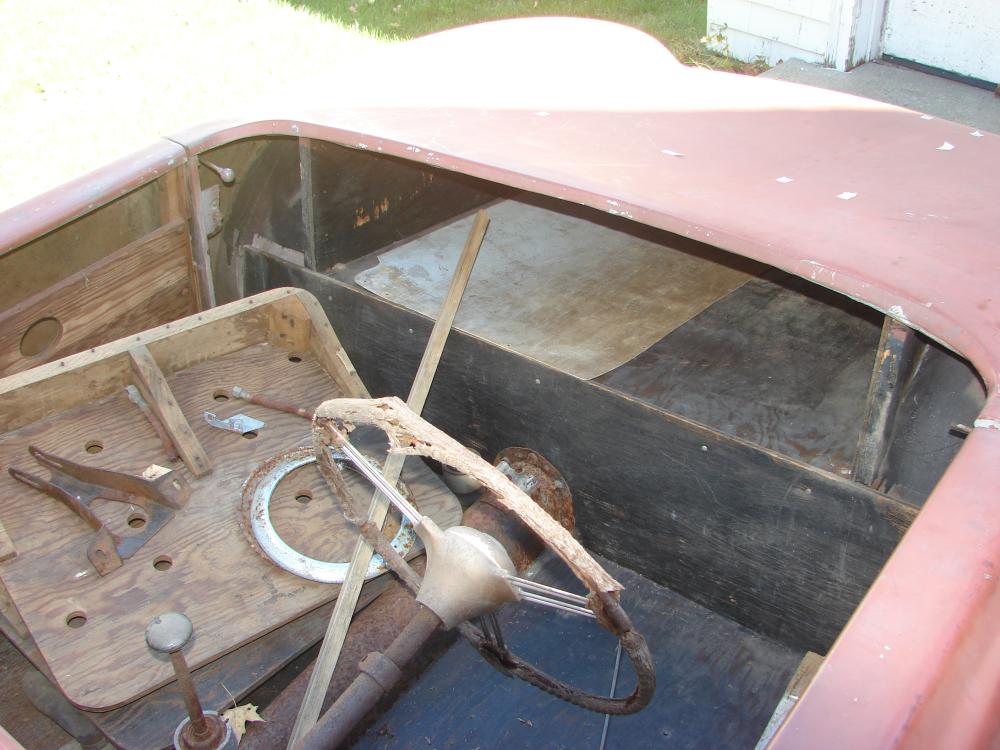 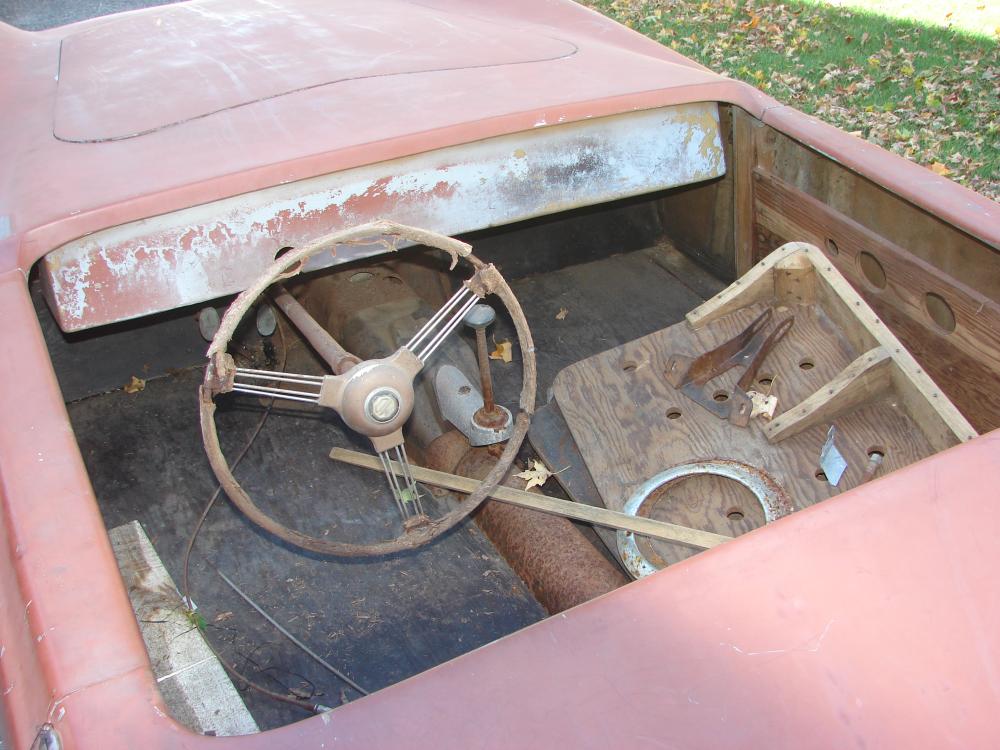 It has been restored (or should I say “built” since it was never completed) as a purpose-built race car since that is what they intended to do with it in 1952.  There is even some speculation that it may have been planned to be an MG record breaker on the Salt Flats at Bonneville where Bill Burke eventually set a land speed record of 154.5 mph in an MG chassis/fiberglass Cisitalia coupe with a V-8 engine.

When I got it, it was just the fiberglass body on a TD chassis with an engine and transmission and wheels.  There was no windshield, dash, instruments, interior or trunk area, and nothing for protection in racing. 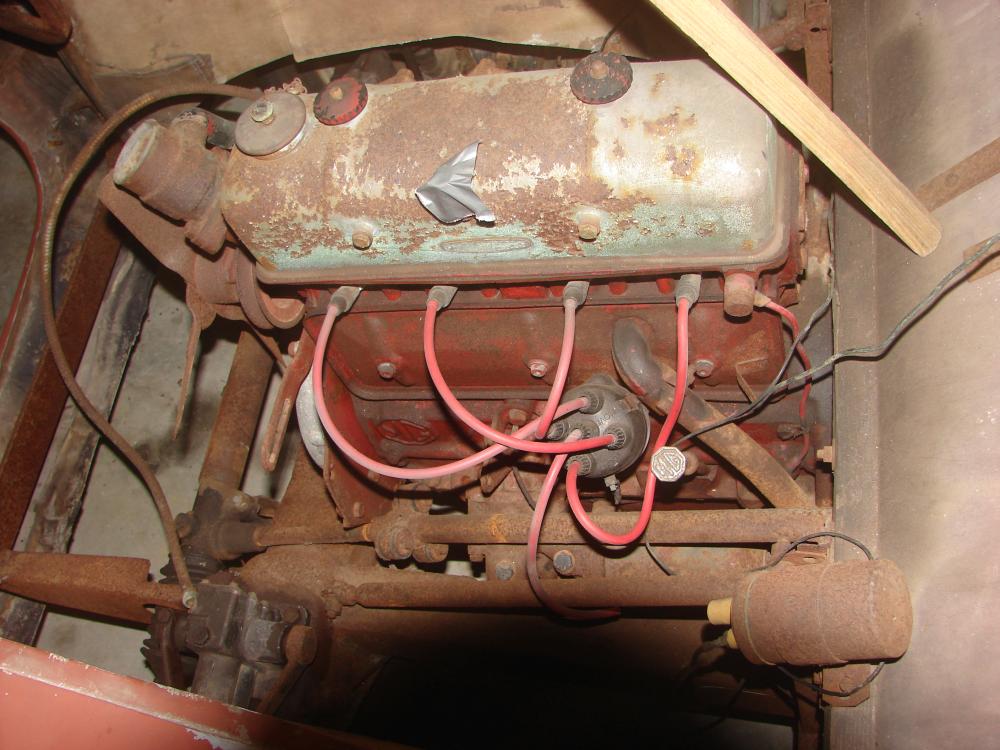 This shows the engine in all its dirty glory!  However, you can see that there is plenty of room in the engine bay, which will be needed later for all the racing equipment – more than I knew!  Things got pretty tight what with all the catch cans, etc. 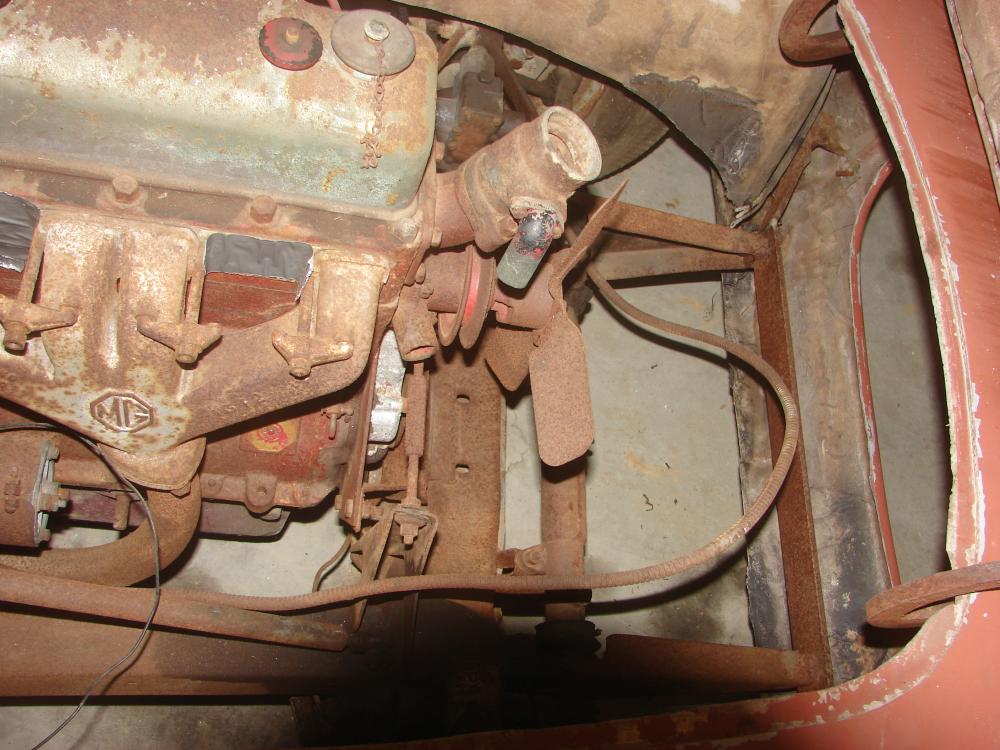 The first steps were to plan the roll bars, suspension, engine rebuild, dash /instrument layout, seating, and what to do with the non-existent trunk area where the fuel cell had to have access.

Since a fiberglass car is essentially what I call a “Styrofoam cup on a hopped-up engine”, it was decided to have sufficient roll bar protection with bars in the front, under the dash, behind the cockpit and a removable driver’s hoop, with an added “bumper” bar at the rear within the trunk area to protect the fuel cell.  In addition, crash bars were designed horizontally for the door areas for added safety. 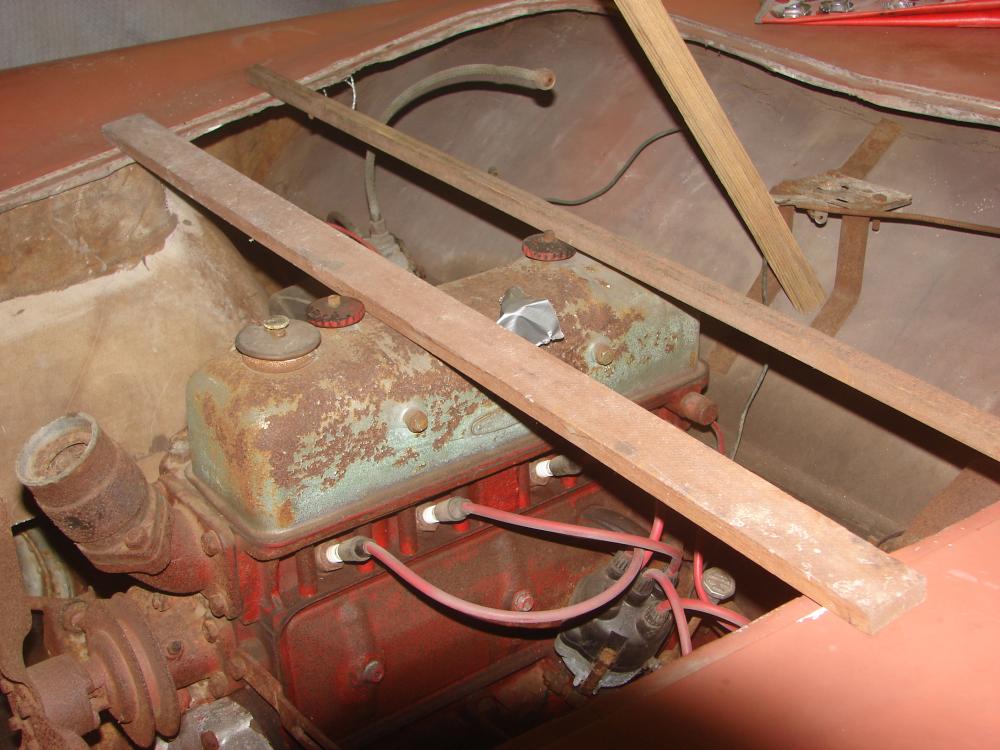 This picture shows how the engine actually interferes with the hood/bonnet – the front of the valve cover, containing the filler cap, actually has made an indentation and cracked webbing marks in the hood from its contact there – this has to be remedied it cannot be run like this obviously. Two solutions seem to come to mind since the engine cannot be “lowered” without creating huge problems with the tranny, driveshaft etc: a) Create a hood scoop to allow more room, or b) acquire an MGTC valve cover with the filler cap in the rear where it might clear the hood – tried that first , and it seemed to work – though barely.

However, first the car had to be lowered for racing, which was accomplished by the replacement of the front coil springs with shorter ones, and the use of TF springs in the rear, lowering the car by about 1.5 inches.

Although the fiberglass body was essentially in great shape, since the car had never been on the road, the trunk area had sagged in, and the cockpit had to be expanded rearward to accommodate a 6 ft. driver.  Finding a body shop that could work well with fiberglass proved to be a problem – there just aren’t that many available. 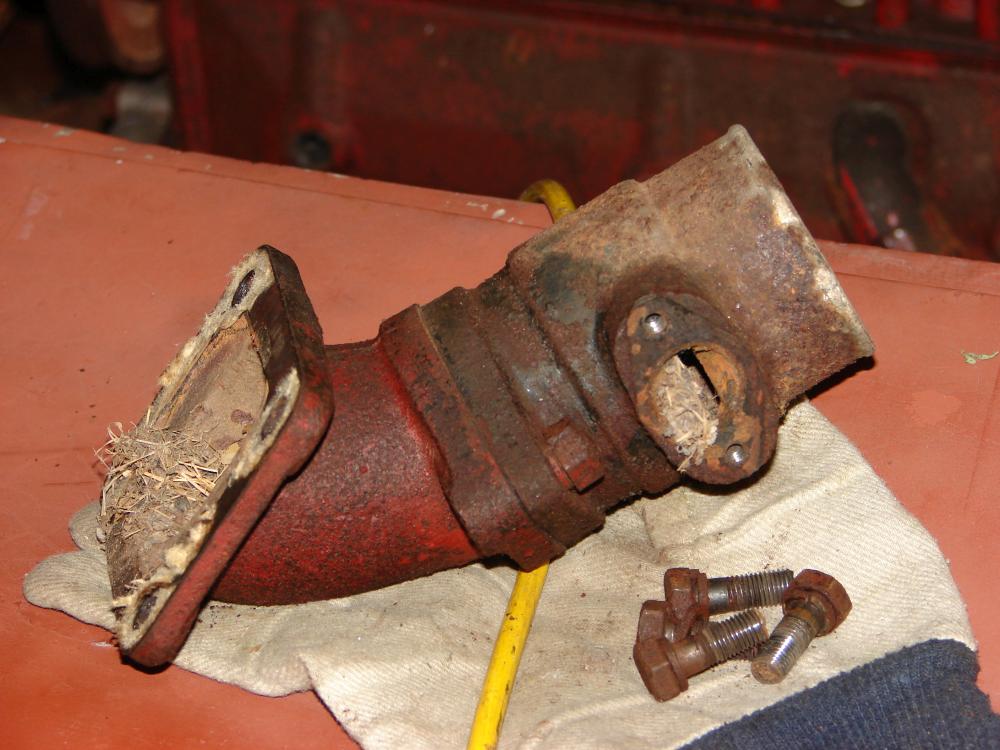 Notice the nice mouse nest in the water elbow to the thermostat housing – it’s been there an awfully long time! They do get into everywhere! By the way – as an aside – to prevent mice from visiting your classis/antique, go to www.earthkind.com ,a website in the Midwest that sells a fantastic mouse preventive – small packets of wood chips that are scented and smell very nice actually – the strong smell overpowers the mice’s sense of smell, by which they survive predators, and so they must leave the area – place one in the cockpit, engine bay and trunk and don’t worry anymore!

Fortunately, I found one within 20 miles from my home in Massachusetts and when I spoke with the owner of Lav’s Auto Body, Dennis Lavallee, it immediately became clear that he knew what to do – the three others I interviewed, not so much.  And, to top it off, he could refer me to “someone who does his metal work” right down the street – yeah, right, what are the chances of that? 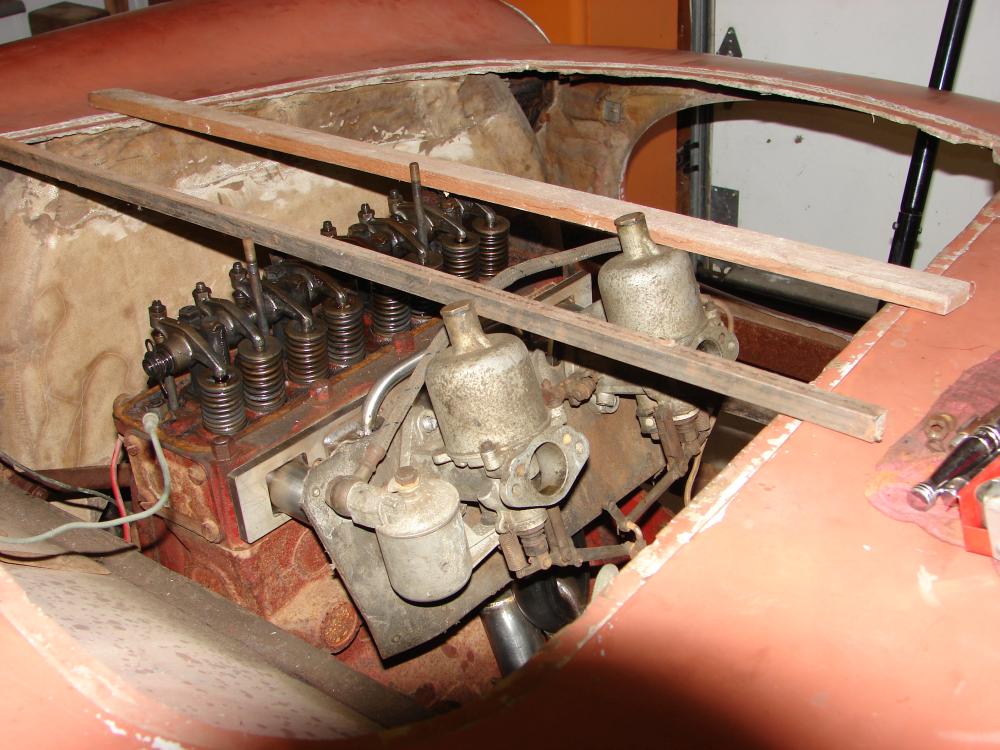 Notice that the carbs also stick up through the hood area – this will require either a small hood scoop or two holes for them to stick through, so hopefully the valve cover doesn’t need one so we don’t have to have two scoops or one very large one – we’ll see…..I opted for the small hood scoop. 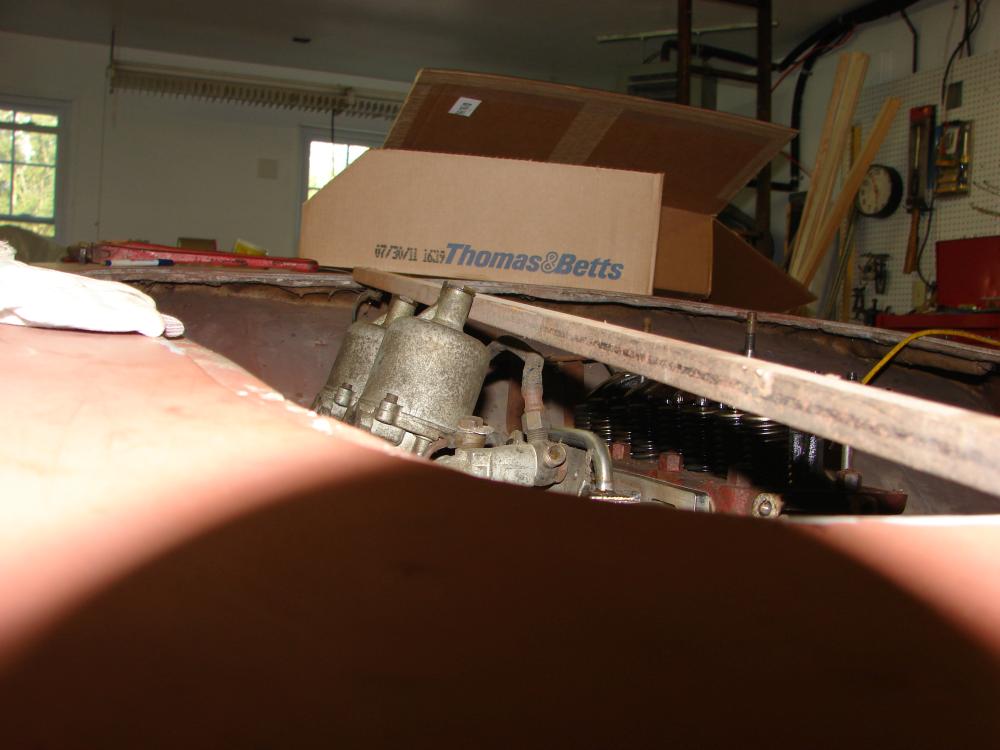 So – In my first visit to the metalworker, it turns out that in this little old building, he was working on roll cages for about five NASCARS – been doing it for 45 years, and is one of the best in the country!  Wow!  I should play the lottery, I thought.

Turns out Rollie Lindblad of Lindblad Racing Chassis is an artist with a torch – everything was to very exacting standards, and he had many great ideas for improving the car as well.  He also removed all the old delaminated plywood on the floors, doors, sills, firewall and trunk areas and rebuilt them with aluminum to perfection!  He also hand-built the various catch cans and radiator to fit this car and modified the steering column to accept a removable steering wheel.

See more in Part 2 of this story in about a month or so. 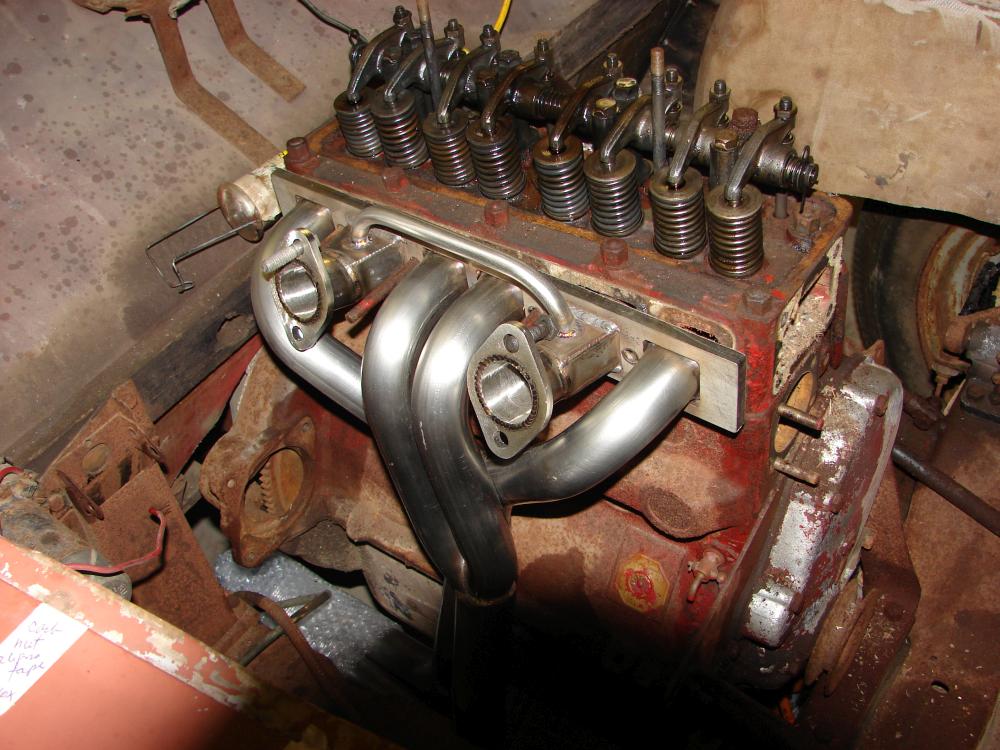 Manley Ford’s Extractor exhaust in place to check fit – looks like a race car already! I’m psyched! You need this once in awhile, to keep you going on a long sometimes tedious project…. 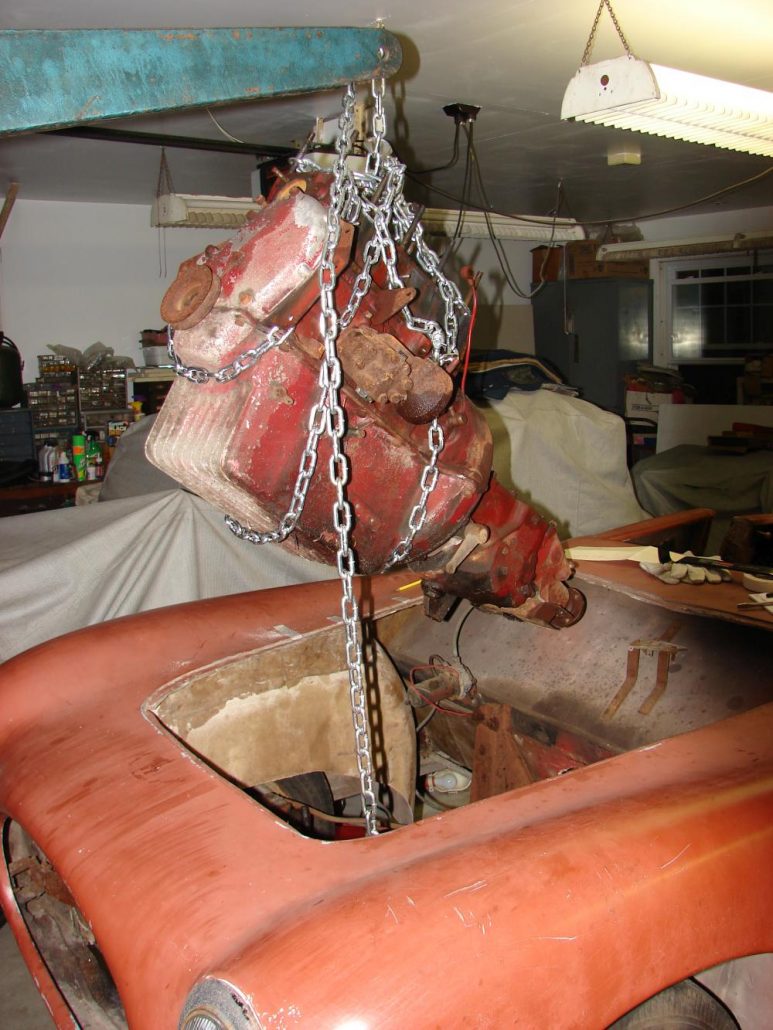 Here the engine has been removed from the car and placed into my “truck” – a 1998 Lincoln Town Car with a huge trunk, to deliver to a friend, John Target, at Lime Rock Park, CT who will then deliver it to Manley Ford in Michigan for the rebuild and special equipment.  It was a good fit! 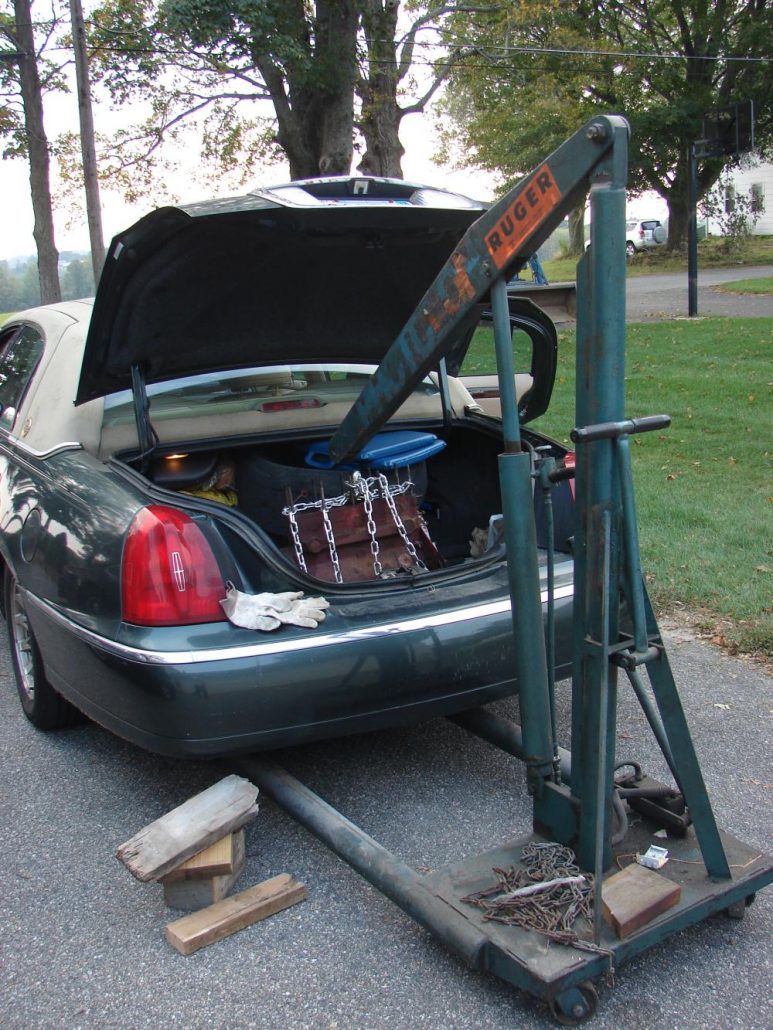 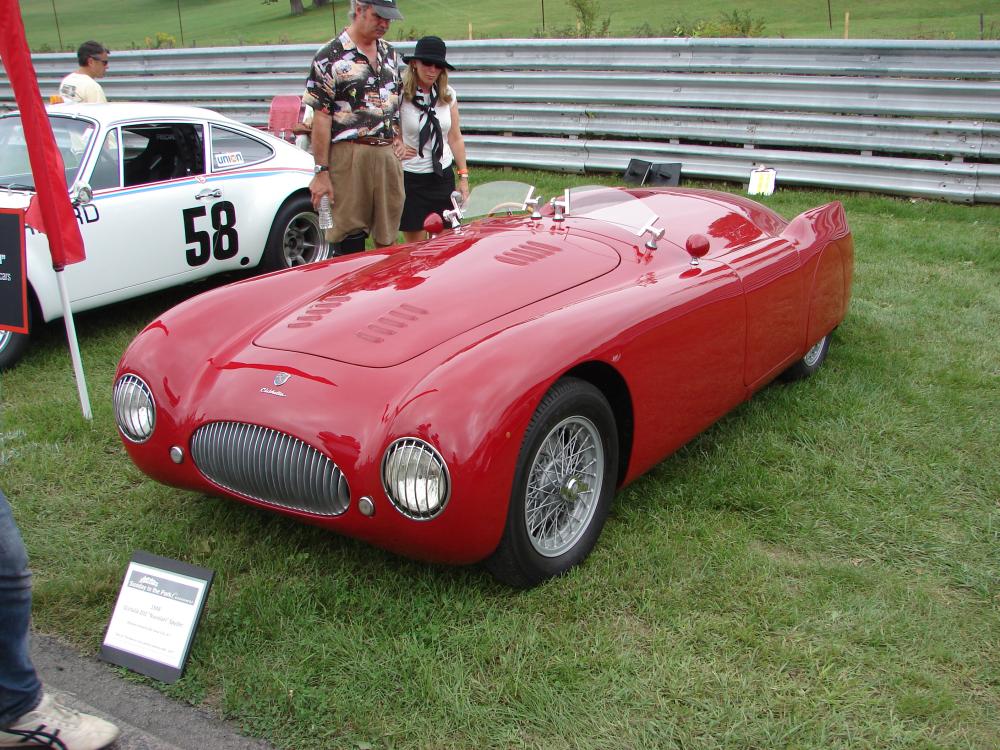 This is a 1948 “202SMM Nuvolari Spyder” a Cisitalia like the one he drove and won his class and placed second overall in the Mille Miglia in 1947 against cars with three times the displacement he had. Nuvolari is said to be perhaps the greatest Driver…. EVER! This car was beautiful, and another real inspiration for me – yes, mine will look good done as well….. 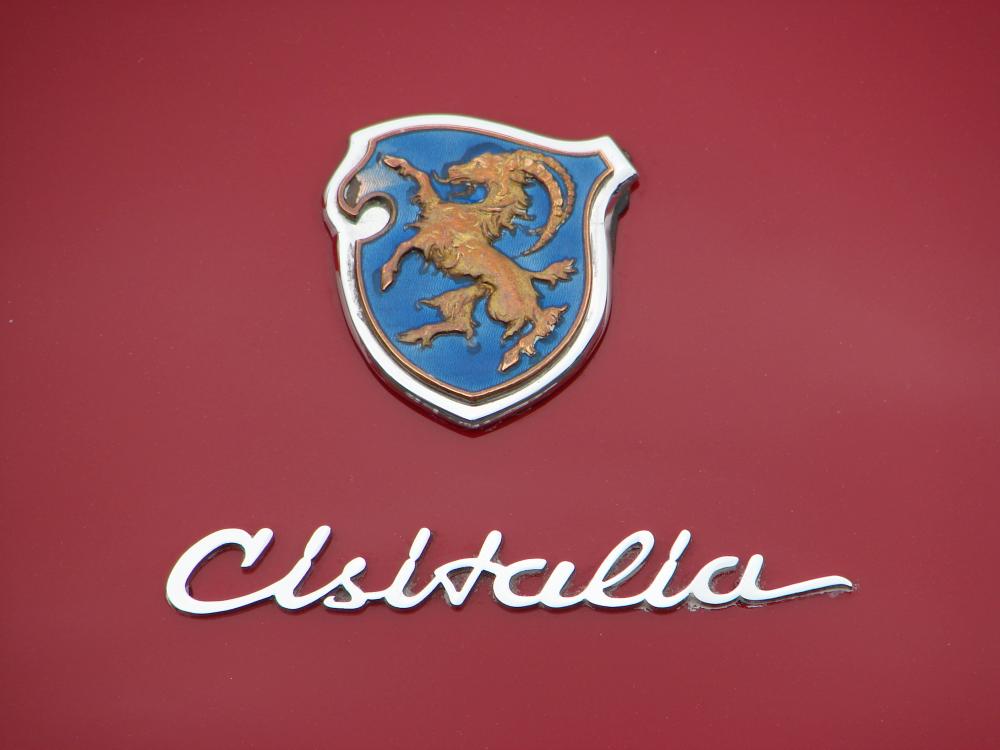 This shows how high the car is on the standard suspension – it will have to be lowered an inch or so with different springs and lowering blocks – this, too, is not without its problems as you will see later…. 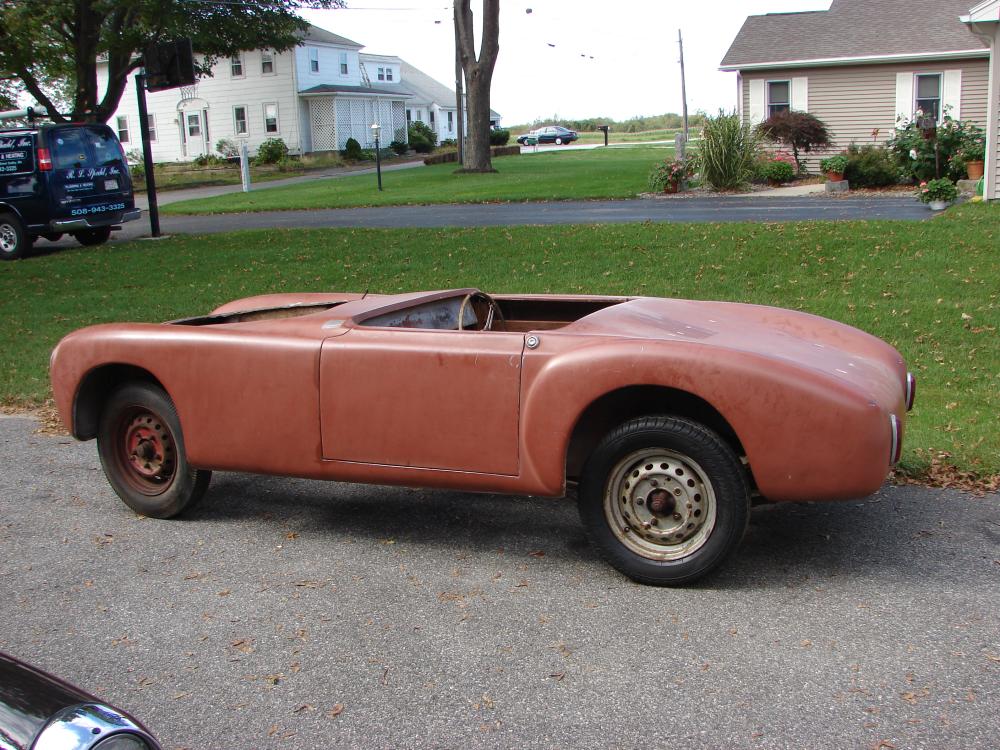 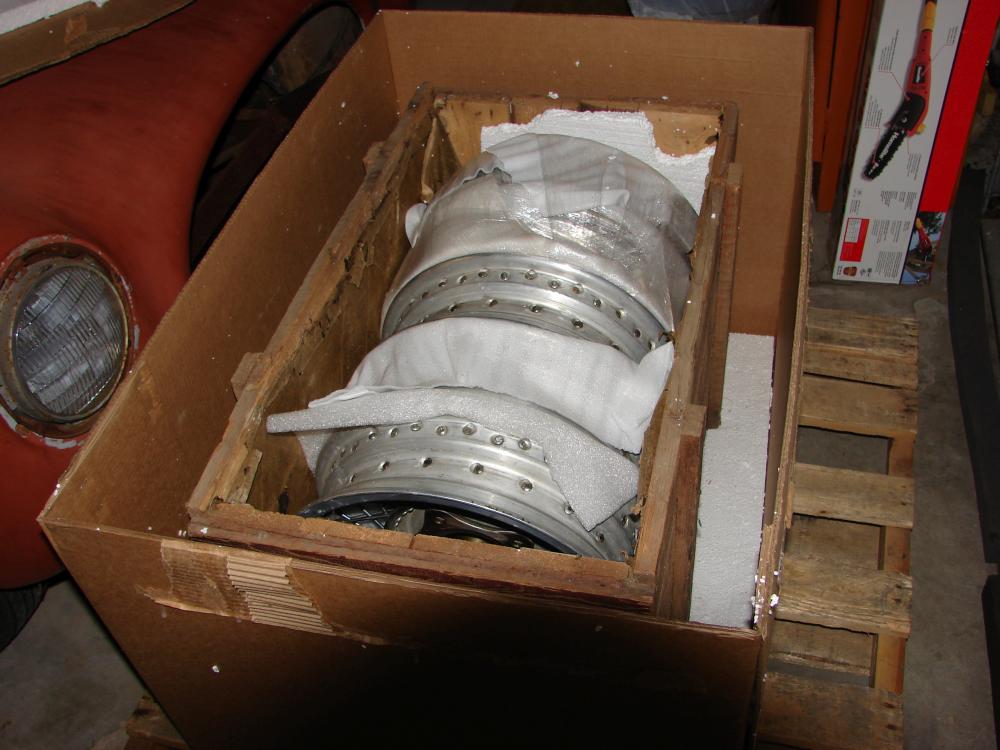 This is a story!!  These are a brand new, old stock (NOS) set of 1952 Borrani 60 spoke wire wheels which have NEVER been put on a car before!  One day, going through Hemmings Motor News, I happened to look at the MG Parts section, something I never do because I haven’t needed much.

Anyway, this day I came across an ad for “5 new Borrani wheels for an MG…. etc.  Oh what the heck, I’ll call….. this very nice retired woman describes how her brother owned a TD and bought the wheels, but never put them on; he passed away recently, so they are for sale…. (are you kidding me!!?)

I bought them at a fair price….. and they arrived at my house in the ORIGINAL Italian wooden shipping crate, wrapped in the original brown paper, with, get this…. The “Carlo Borrani” medallion printed all over it.

The wheels are absolutely like brand new, off the shelf, and they come with the famous bolt-on adapter Borrani made for TD’s!  Again….. should have played the lottery!  But what a find!  They are absolutely unavailable today. 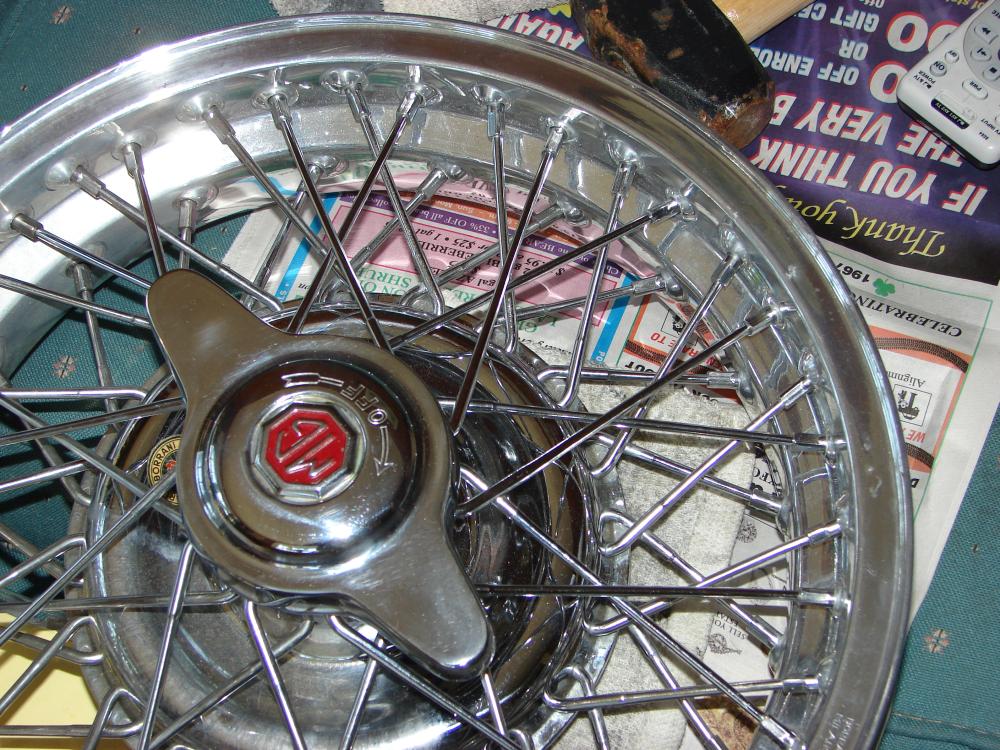 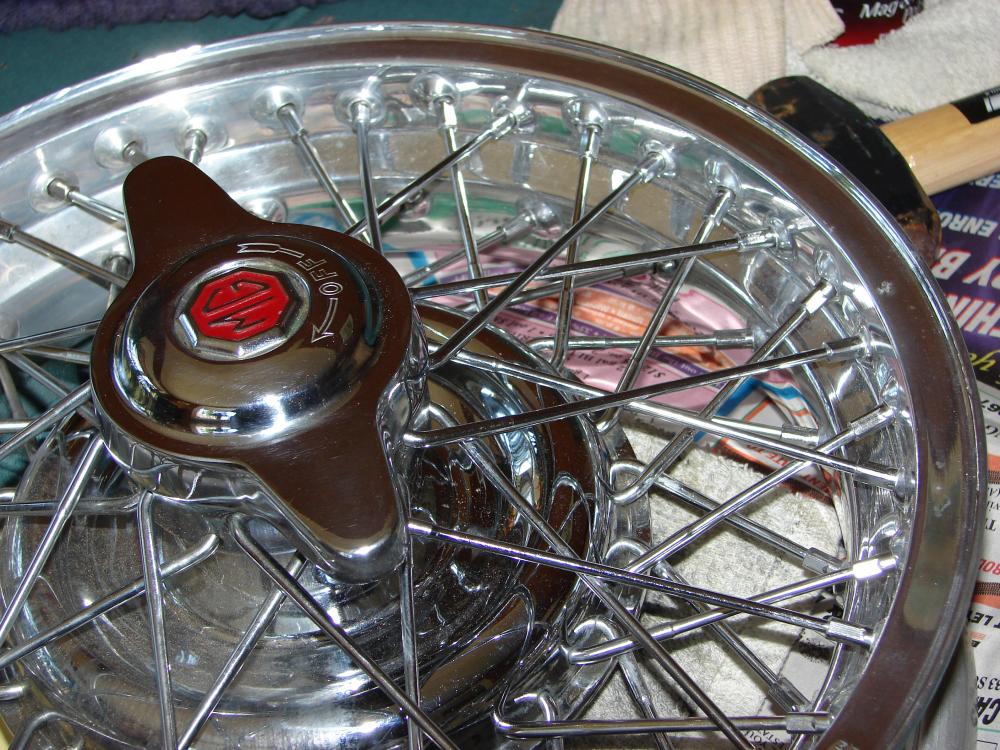 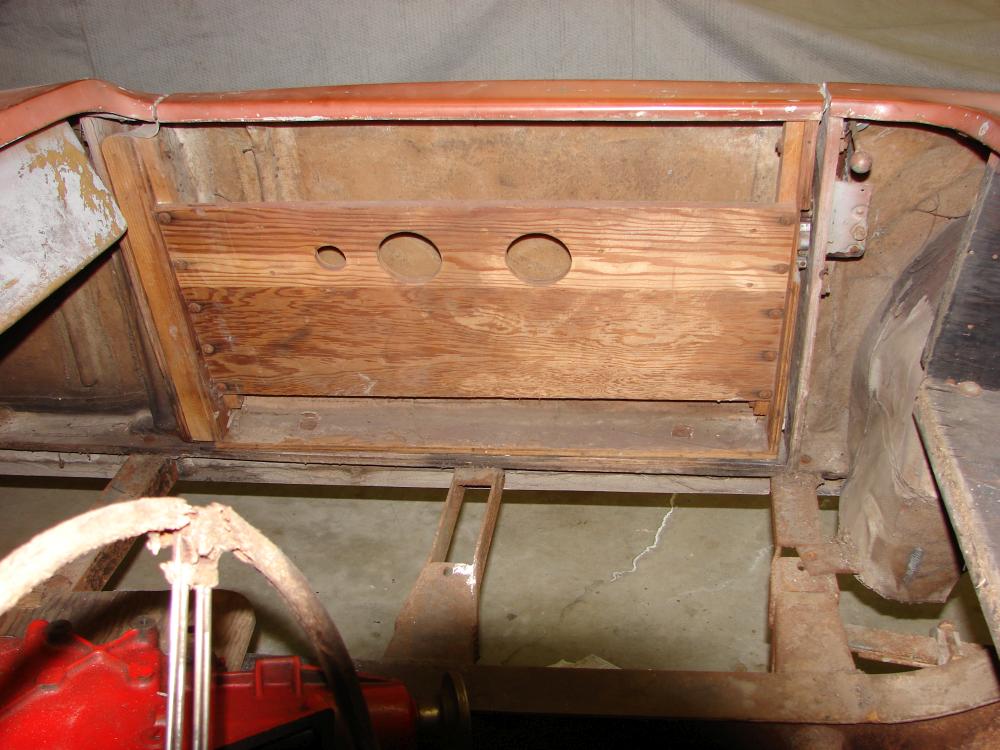 It is now 2013, so the push begins for Watkins Glen or BUST! This is a shot of the wooden door panels, threshold and jambs made of delaminating 1952 plywood (no exterior plywood then), as was used throughout the car for the floors, trunk area behind the seats, and toe board etc. everything was just coming apart! Wait til you see the next Part 2 and see the incredible work the welder did on all these parts! 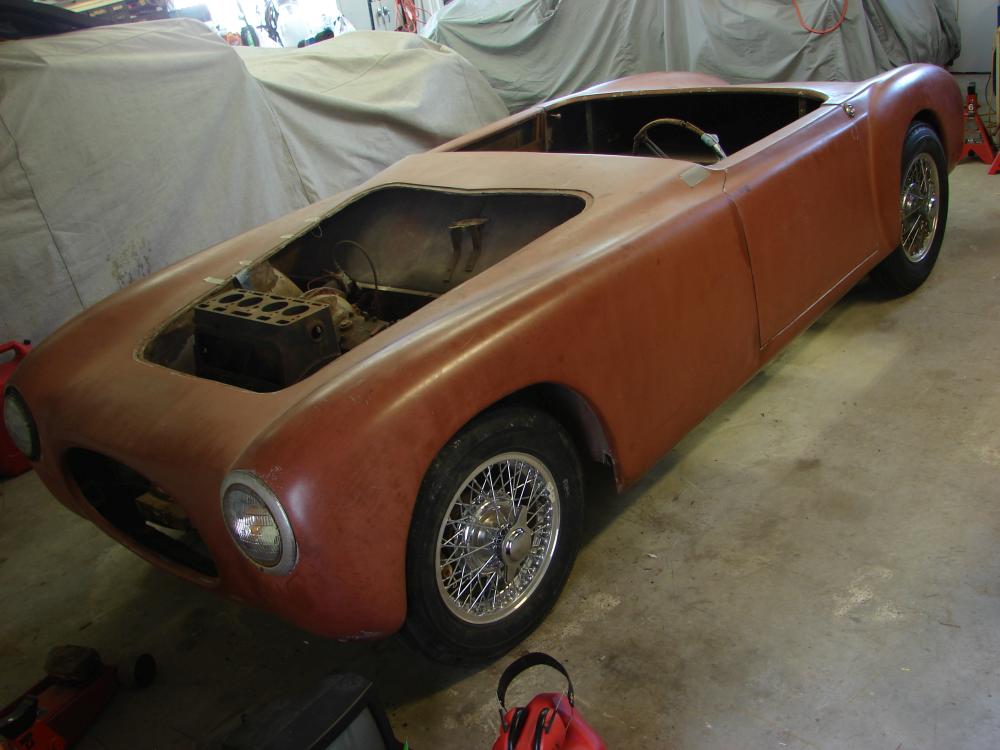 This is a shot of the rough car with my set of old Borrani’s on it – looks great! It will be a fine looking car when done…… can’t wait! 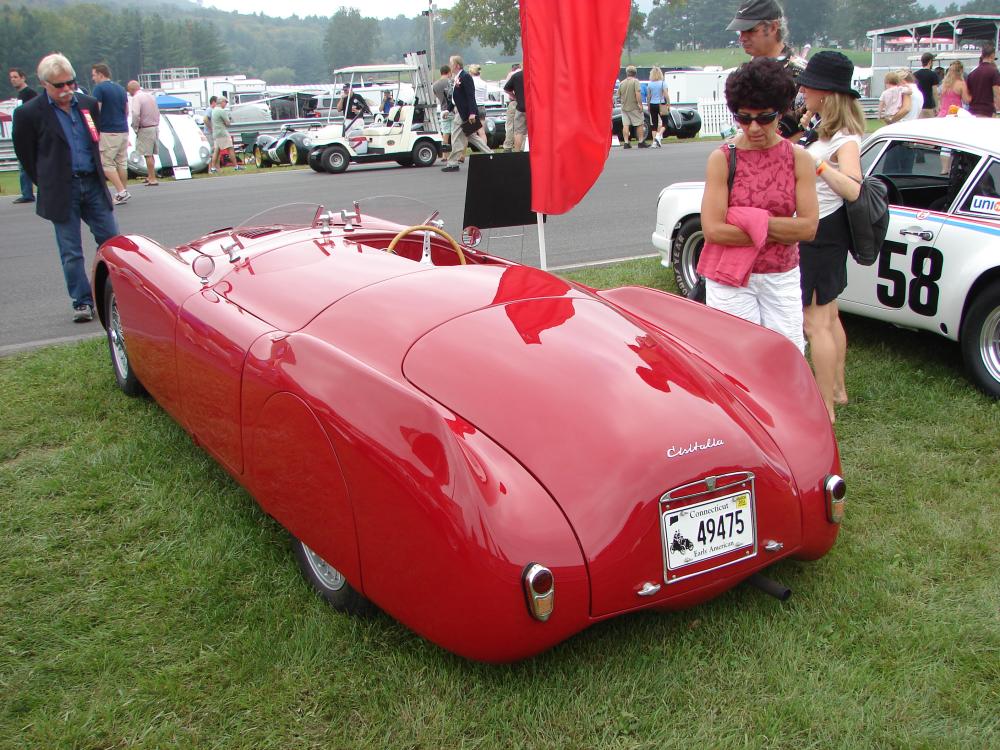 Great thanks goes to Robert O’Meara for sharing the first part of this story with us on the history and restoration of his car.  I greatly look forward to reading part 2 of the story with each of you soon 🙂