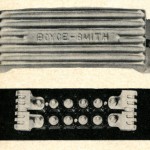 As Shown in the Vintage Article Below – A Very Utilitarian Piece – I Could Use a Supply of These Today!

And you Victress owners out there thought you had everything…

Fiberglass body builders back in the day were first and foremost businessmen.  So it shouldn’t surprise you that many of the firms producing beautiful fiberglass bodies in the early and mid 1950’s also produced a variety of other products.  Some sold accessories for their cars – like we recently reviewed in the 1953 – 1954 Glasspar G2 brochure.   Accessories might include seats, dashboards, hood scoops, and anything that could be used on sports cars that were being built across the country.

Accessories were not the only items being produced.  Most significantly, both Glasspar and Victress helped design and build bodies for other companies.  Bill Tritt of Glasspar designed and built the Woodill Wildfire and Volvo P1900; Hugh Jorgensen for Victress designed the prototype of the Pioneer marketed by George Lipponcott – later to become the Nik-L-Silver car (they switched to an Alken body later).

This even extended to frames.  Noel Bangert and Jim Kellison built frames for their cars (other companies relied on suppliers of frames like Mameco or Hellings), and many of these same companies kept busy filling different types of military contract orders.  Victress Manufacturing even built the Olympic rings for Squaw Valley in 1960.  These were smart hungry companies figuring out every which way to make and deliver a successful product to the public or to private and government industry. 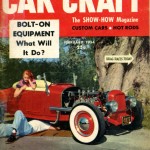 One of the neatest accessories was launched by Victress and this was the “Boyce-Smith Terminal Box”.  Doc Boyce-Smith had started his company in 1952 and its first name was the “Boyce-Smith Company”.  Around 1953, Doc was determined to offer a wider array of parts to sports car builders, and this little gem was designed to help those building cars from scratch.

The “Boyce Smith Terminal Box” was featured in the February 1954 issue of Car Craft, and I’ve shared the original article below.  Let me make it easier to review, and share the words in the magazine concerning this new accessory:

Terminal Box: One of the nastiest jobs in reworking a car, particularly when building from scratch, is that of wiring.  The stuff can get like so much spaghetti if one is not careful.  One of the best ways to avoid this is to use a terminal box which brings all the leads to one central location.

Usually these have been homemade and have looked utilitarian at best.  At worst they’ve looked like an amateur radio technician’s nightmare.  A neat remedy for this is a new terminal box with a finned aluminum cover designed by “Doc” Boyce-Smith, builder of the Victress sports car and dragster bodies.

The box carries two resistors for use with a dual coil ignition system.  Eight other terminals for other parts of the electrical system are completely centered in the box.  A finned and buffed aluminum cover tops it off, matching your other finned engine goodies.  Price of the box is $6.95.  Dealer inquiries are invited by the Boyce-Smith Company, 11823 Sherman Way, North Hollywood, Calif. 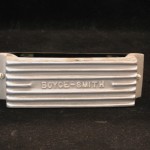 I first came across a sample of this item via Bill Quirk – Production Manager for Victress from 1952 thru 1961.  Bill was kind enough to send it to us for documentation and the original now rests in the collection of Victress Co-Owner from the 1950’s – Merrill Powell.  Still later, we located the article from 1954 reviewing the item shared today.

So far this is the only example we’ve found, but maybe some of you fiberglass super-sleuths out there may be able to hunt 1 or 2 of these babies down.  Talk about the ultimate in rare vintage Victress bling!  If any of you find these out there gang….be sure to let us know.  You’ll have quite a special little trophy.

So….what other rare and unusual accessories are out there lurking in the vintage fiberglass automotive world?????  You’ll have to stay tuned to our “Forgotten Fiberglass” website to learn the secrets and share in the joy of discovery.

Thanks again to both Bill Quirk and Merrill Powell of Victress for sharing a bit of history with us – and one cool accessory. 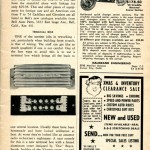 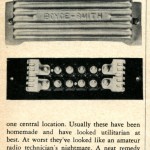 As Shown in the Vintage Article Below – A Very Utilitarian Piece – I Could Use a Supply of These Today! 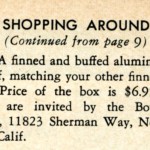 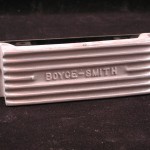 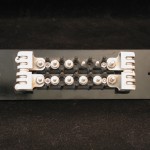 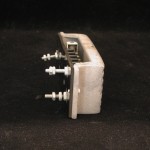 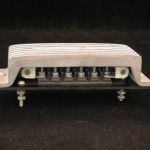 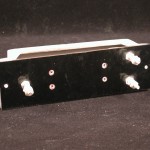 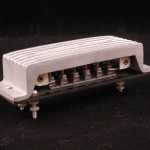 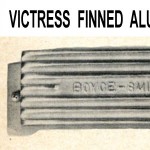