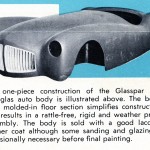 The One-Piece Construction Technique of the Glasspar G2 Body is Promoted Throughout the Brochure – Complete With Molded in Floor!

Rick and I are continuing to share information across each of the fiberglass car marques in the hopes of carefully and completely building a history for each of the companies – on our website and in our upcoming “Forgotten Fiberglass” book.  To this end, we’ll share some of the brochures of the most popular fiberglass cars, and outline the history of each brochure and the items contained within.

In some cases, the information we’ll share is based on additional detail which will be forthcoming.  Where this occurs, we’ll do our best to point that out.  So let’s dig in a bit gang… 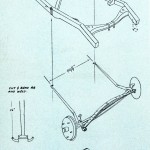 That’s the lead statement on one of the pages of the Glasspar G2 brochure in this story.  And when we cover the assembly instructions in a future story, you’ll be surprised it was just 2 pages long.  That’s right – one piece of paper with excellent detail – printed on both sides.

That’s better than most other early “first generation” fiberglass companies.  From what we can tell…over 50% of the companies from 1952-1956 had little or no instructions for customers who purchased the body.  It was assumed that the buyer had such knowledge, or could learn from the magazine articles that were common back then about building fiberglass sports cars.

I don’t know about you guys but I need alot of direction – especially if I am building a car.  I get lost trying to follow the instructions from the GPS in my car.  And that’s just when I’m trying to return home!  If I hear “recalculating….” one more time from my GPS….

So… what else do we see in this brochure.  Let’s review some points:

This brochure is beautifully executed and is the last automobile brochure known to be produced by Glasspar.  As such, it shows many of the advancements Glasspar had made in producing bodies, and shows some great examples of finished cars too. How excited anyone who received this brochure must have been about the potential of building their own Glasspar G2 sports car!  In fact, I’m ready to go and start one right now!

Frank Hecox worked for Glasspar and helped produce G2 bodies from 1952 thru the last body in late 1954.  Frank worked for Warren Gerdes during the years these bodies were produced and remains a friend of the Gerdes family today.  In 2009, I reviewed this brochure with Frank and he mentioned the following about the picture showing several people with cars in front of the Glasspar building:

History of picture of G2’s lined up in front of Glasspar Company on Newport Blvd:  Otto Bayer (one of first Glasspar investors and employees) took the picture of the cars in front of the Glasspar Building.   The car owners included Jerry Neiger (investor in Glasspar) whose car was based on a Chevy chassis, and Bill Tritt’s car (Bill’s racecar had not been built yet).  Other customer cars were brought to Glasspar for the photo – that is, people who owned cars and lived in the surrounding area.

This photo was taken as a record of what Glasspar, the company, had accomplished.   This picture was taken early in the company’s history, and I (Frank Hecox) had just started with the company.  Bill tritt and his wife are in the picture standing together near the door.  Warren Gerdes is shown at the far right of the picture near the Glasspar sign on the side of the building.  Harold “Shorty” Post may have been in the picture as well.  The car with the hardtop was the first car to have one for quite a while – it was owned by Ted Thal – owner of Thalco (supplier of plastic/resin/cloth/materials).  He was a heavy guy and his car was blue in color and had a Henry J engine and chassis .  The schoolhouse where we built the cars was to the right of the photo. 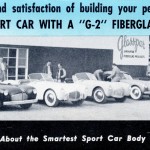 Great Collection of Cars Gathered at Glasspar Factory – Circa Late 1952

In late 1954, the last G2 body was built and shipped out.  There is a picture of it (Frank has it in his album) mounted on 2×4’s sitting in the Glasspar shop with a Disney project underway.  The picture was taken in late 1954 – before Disneyland opened which was in July 1955.  Glasspar was creating the  molds for the Jungle Cruise boats at that time.

By the end of 1954, G2’s had come to their end.  But there was talk of a new Glasspar sports car design – the Ascot.  It had debuted by late 1954, and things looked promising for potential sales of this new car.  So the future of Glasspar automobiles looked good.  Little did Bill Tritt know that the bell had already tolled for the cars, but more about that in a future story.

Hope you enjoyed the brochure gang, and kudos to Bill Tritt and Glasspar for doing such an excellent promotional job on such a nicely done brochure.  Professional and well-executed in every way.

Update 5/15/2010:  Matt Tritt had a chance to review a higher resolution image of the line-up of cars in front of his father’s company, and here are his memories:

“You can barely see Otto Bayer in his baseball cap at the left of the image.  The person walking into the picture from the left – holding a movie camera – might be Peter Handcock who was from Great Britain and worked for my Dad.  In the doorway are my parents – Bill and Betty Tritt, and in front of them partially blocking my father is Jerry Nieger who was an investor in Glasspar.

Larry Solomon who was the brother in-law to Jerry Nieger and a co-investor in Glasspar is standing in front of the window and behind the cars.  The two guys next to the white car were both employees – perhaps Don Kingsbury and another whose name I cannot recall.  One of the two guys next to the hardtop car appears to be Ted Thal of “Thalco”.  The last guy on the right is Warren Gerdes.

It’s interesting to see all the cars wearing whitewall tires.  It was very stylish at the time.

FYI, the first Glasspar air scoop was created in order to provide the vertical room required by the three Strombergs used on the G2 racing car. I remember dad having to design and build the scoop PDQ because of an up-coming race.  It was offered as an option for Glasspar G2 cars after that time.

Another issue, and the one that likely caused the fire that put the car (which was well in first place at the time) out of the race at Pebble Beach, was that there were no air cleaners or backfire preventers of any kind because of the lack of room under the hood – even with the scoop.  When the car caught fire, it was nearly a lap ahead of other participants in the race.  The fans were very excited about how well it was doing and when they saw the racecar pull off to the side of the track – many of them ran over to help extinguish the fire and push the car back on the track.  But the fire had caused too much damage for the racecar to continue.  Warren (Gerdes) later told us that the flames kicked back over the firewall and were touching his legs (he was very tall too!).

Thanks for the extra detail here Matt….. 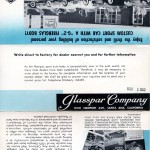 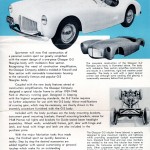 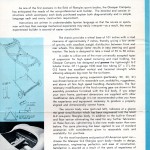 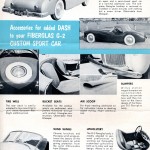 Great Collection of Cars Gathered at Glasspar Factory – Circa Late 1952 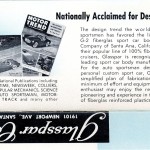 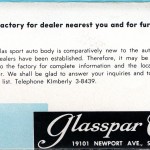 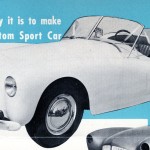 The One-Piece Construction Technique of the Glasspar G2 Body is Promoted Throughout the Brochure – Complete With Molded in Floor! 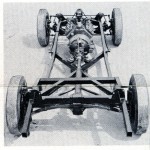 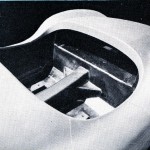 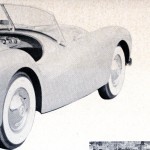 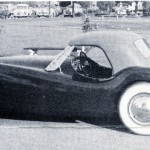 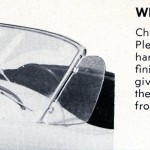 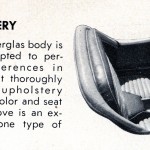 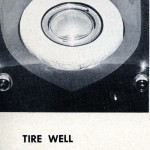 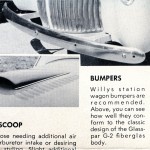 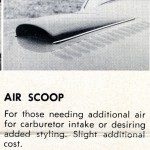 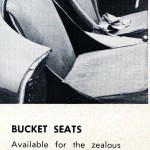 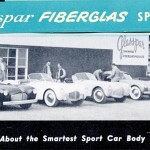