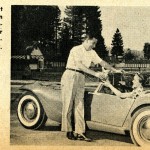 Those are the ones that capture my attention – just like Glasspar’s Ascot which debuted in early 1955.   I’ve written once before about this car and it was to highlight its debut in Motor Trend, February 1955.

Click here to read more about the debut of the Glasspar Ascot.

Today’s article occurred several months later and contained more detail on the positioning of this car within the sports car market.  Glasspar was ready to take the next move, and this fiberglass pioneer was going to push the sports car market in a new direction – “neoclassic design.”

The Ascot was heralded as a significant enough car to appear on the cover of Speed Mechanics Magazine that summer.  Pretty impressive gang!  Just inside the magazine, here’s what they had to say about the cover shot of the Ascot:

“Cover: Bill Tritt’s Glasspar Company of Santa Ana, California, pioneers in commercial production of plastic car bodies, has announced their latest model.  The Ascot features a full compliment of U.S. made parts under its plastic body shell, and has a wheelbase of 94 inches and weighs about 1750 pounds.  With a modest-output power-plant, performance is excellent.  Production is scheduled for early summer.”

Let’s take a look at what the article had to say about Glasspar’s new endeavor – the Glasspar Ascot. 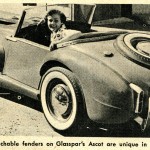 “Anyone who wants a custom-built automobile but does not have the time, patience, or skill to tackle a full-scale plastic body will recognize the possibilities of the Ascot. Built by the Glasspar Company of Santa Ana. California, one of the pioneers in the plastic body field, the Ascot sports distinctive traditional styling and a complete lineup of American-built components.

Bill Tritt, President of Glasspar, fathered the first commercially produced plastic car body back in 1951. Continuing research in reinforced plastics, still underway even today, resulted in new mechanical and styling techniques not considered practical at first. Unlike previous Glasspar models, usually molded in one-piece. the Ascot has readily detachable and replaceable fenders and weather-tight roll-up windows. The folding top stores behind the seats, affording exceptional visibility when up. The weatherproof luggage space in the trunk will accommodate “two-suiter” bag and tools.

The body is molded, by the hand layup technique, from fibrous glass and a polyester resin. Other molded parts include fenders, radiator shell, floor assembly, trunk, and trunk door. The spare tire is partially exposed in a special well inset in the sloping rear deck.

The Ascot’s body is mounted on a specially-designed rectangular tube steel chassis with a wheelbase of 94 inches and a tread of 53 inches in front and 54 aft.  Most of the other chassis and running gear components are standard or modified U.S. made parts. Weight distribution of the 1750 pound car is 50-50. Ground clearance is six inches.

Power in the prototype was delivered by a 100 horse in-line six that gives an excellent power to weight ratio. The performance potential of the new car is matched in the braking department with ram air cooling used to minimize fade problems. 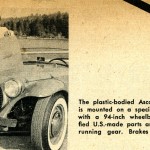 Caption Reads Here, “The Plastic-Bodied Ascot, Built By Glasspar, Is Mounted On A Specially-Constructed Frame With A 94 Inch Wheelbase. Standard; Modified U.S. Made Parts Are Used In Frame And Running Gear. Brakes Are Air-Ram Cooled.”

Present plans of the Glasspar Company call for wide distribution of the car ready to roll, decked out with leather upholstery and cherry wood trim, fully equipped from top to tires, for about $2600. For those who wish to modify their own chassis, the body alone will be available at an as yet unset but considerably lower, price.  Either way. the Ascot looks like the car to watch in the salesrooms and on the road this summer.” 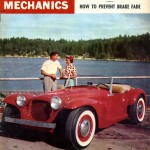 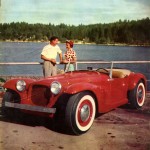 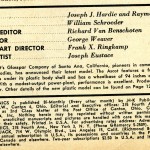 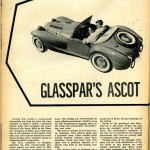 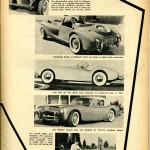 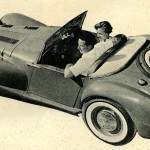 Caption Reads Here, “The Plastic-Bodied Ascot, Built By Glasspar, Is Mounted On A Specially-Constructed Frame With A 94 Inch Wheelbase. Standard; Modified U.S. Made Parts Are Used In Frame And Running Gear. Brakes Are Air-Ram Cooled.” 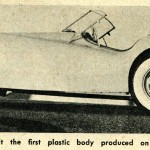 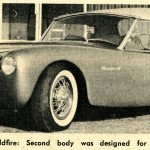 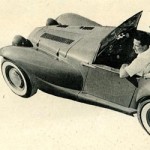