This car has always been special to me.  It was one of the first cars that Rick D’Louhy and I collaborated on, and  finding the first car involved getting to know and becoming friends with Jon Greuel too.  Some of the best stories have a lasting impact in terms of friendship and adventure.

Back around 2006 we had pushed forward and found and retrieved our first Grantham Stardust sports car.  Research was still fairly new to us and with a lot of hard work and copious amounts of luck we located the Grantham family too.  One of the photos they shared with us was a fairly nice scan of the Grantham Stardust as shown below: 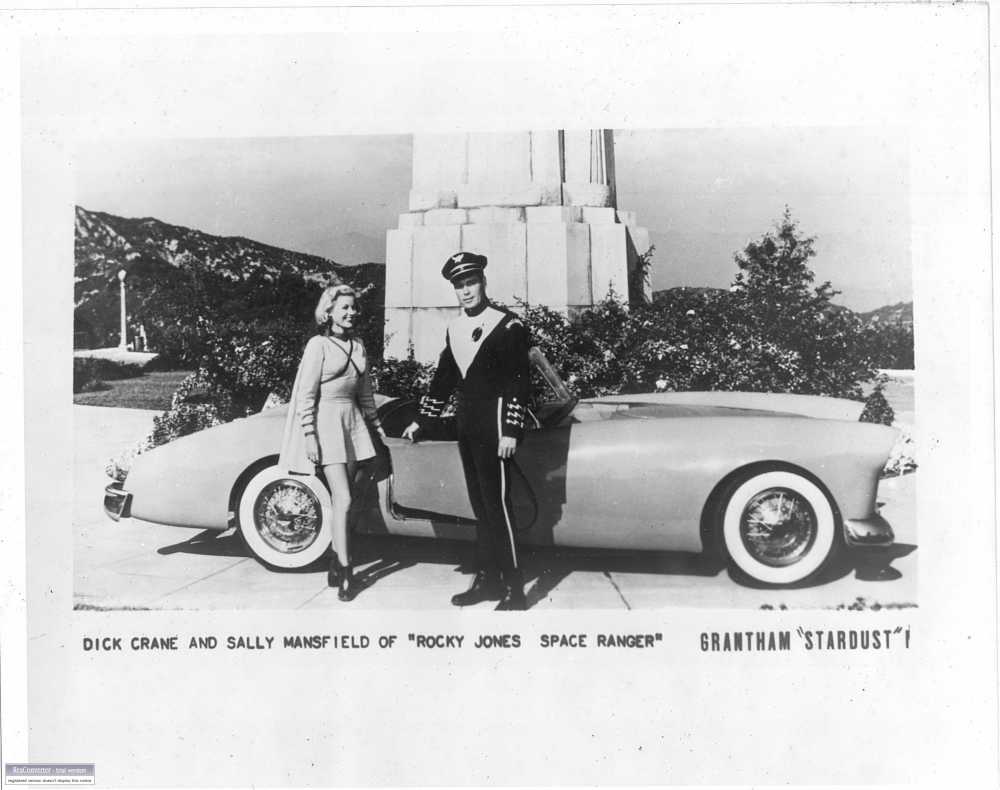 The caption read “Dick Crane and Sally Mansfield of ‘Rocky Jones Space Ranger.’”  Neat photo and great to see the publicity, so I quickly turned to learning more about this TV show.  Here’s what is discussed about this show on Wikipedia:

Rocky Jones, Space Ranger was a syndicate science fiction television serial originally broadcast in 1954. The show lasted for only two seasons and, though syndicated sporadically, dropped into obscurity. Because it was recorded on film rather than being broadcast live as were most other TV space operas of the day, it has survived in reasonably good condition.

The film format also allowed more elaborate special effects and sets, exterior scenes, and much better continuity.  The show was based on the exploits of clean-cut, square-jawed Rocky Jones, the best known of the Space Rangers. These were Earth-based space policemen who patrolled the United Worlds of the Solar System in the not-too-distant future.

Rocky and his crew would routinely blast-off in a V-2-like chemically-fueled, upright rocketship, the Orbit Jet XV-2, or later the nearly identical Silver Moon XV-3, on missions to moons and planetoids where the odds of success seemed remote yet they would always prevail. Although they might destroy a rocketship full of unseen bad guys, their space pistols were never fired at people, and conflicts were always resolved with fistfights.

Although many strange worlds were visited, the alien characters usually spoke English and always appeared as normal humans, albeit in bizarre costumes and environments. The script-writers did not appear to know the difference between planets, moons, stars and constellations, so that the specific locations Rocky and his sidekicks visited are generally unknown to astronomers.

Half-hour episodes were usually grouped into stories that consisted of three ‘chapters’ that were broadcast on successive weeks. A few of the stories were complete in one episode.

The Grantham Stardust “In Space…”

Fred Grantham’s business was located smack dab in the center of Hollywood, California.  The address of his dealership and building was 7318 Sunset Boulevard, Hollywood, California.  Having access to those in the TV and movie business was not a problem, and Fred Grantham’s son remembers movie stars Tony Curtis and Jeff Chandler both visiting his father to see cars being built back in ’53 and ’54.  (the Grantham Stardust would later appear in the movie “Johnny Dark” starring Tony Curtis, Piper Laurie, and Don Taylor).

Enterprising individuals such as Fred Grantham and B. R. “Woody” Woodill made the best of their close proximity to the movie business and both had cars that starred in movies and tv shows of the time – and what great fun it is to see these cars in action back in the day.

Here’s a Rocky Jones Space Ranger video from YouTube.  Just over 3 minutes into the video you can see a Grantham Stardust roar into the scene.   The entire video is about 25 minutes long, but you can skip to about the 3 minute mark for those of you interested in seeing the “Stardust” in action.

I continually search ebay in the hopes of finding fiberglass relics and promotional materials from back in the day.  Recently I found a nice clean publicity photo from the Rocky Jones TV show that features the Grantham Stardust.  It’s a bit more complete than the one I featured earlier.  Here’s the photo: 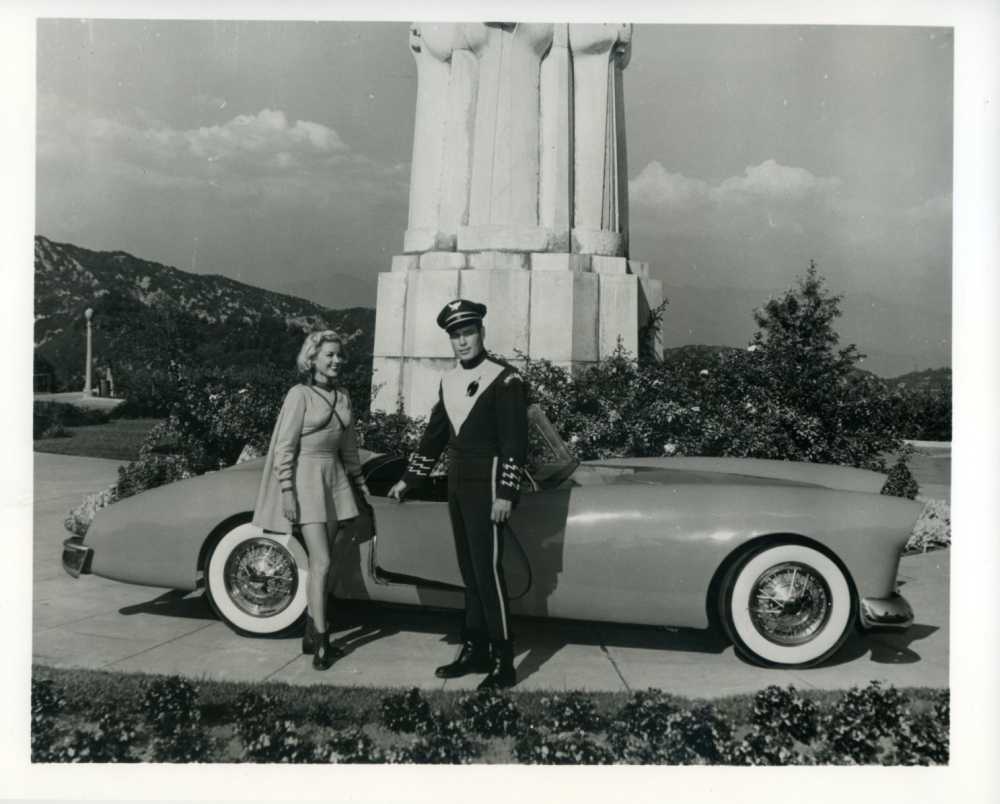 Recently, I shared the photo with Jeri Clark who worked for the company back in 1953 that built the Stardust bodies – Gene Schneider Plastics.  Here’s what Jeri had to say about the photo:

Geoff,  I remember the day they shot that picture.  If I remember correctly, it was taken in front of the Griffith Park Observatory.  There was another view with the observatory building in the background.   The Stardust might not have been the best design ever – for a car of the future – but it was a hell of a lot better than those ” future” space costumes.  Thanks for covering me and my best regards:  Jeri

Jeri was right – the photo was taken in front of the Griffith Observatory and the folks at “Rocky Jones” used this setting more than once in the tv series.  We have yet to go through all episodes (readily available on ebay) so if anyone wants to help – jump on board.  The more….the merrier.  Here’s a listing of all episodes of this tv space “classic” from the ‘50s: 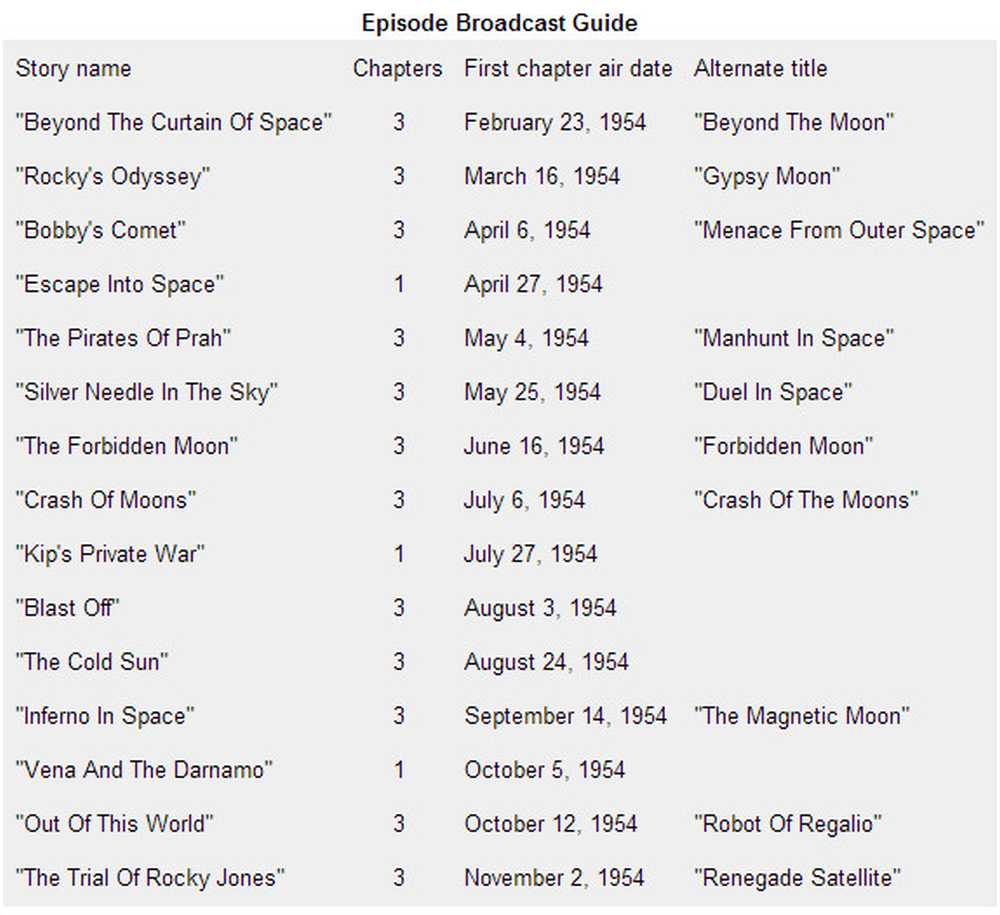 In the pursuit of research, you often find additional information that helps shine light on the times and the topics covered, and that was the case on the publicity photo above.  In order to acquire the photo of the Stardust in the Rocky Jones Space Ranger show, I had to purchase several other photos too.  Not bad – in fact they are kind of fun to see and I’m honored to share with you the other photos acquired as part of this collection.

So step back in time and have a gander at some of what the studio prepared back then to showcase their work – “Rocky Jones Space Ranger.” 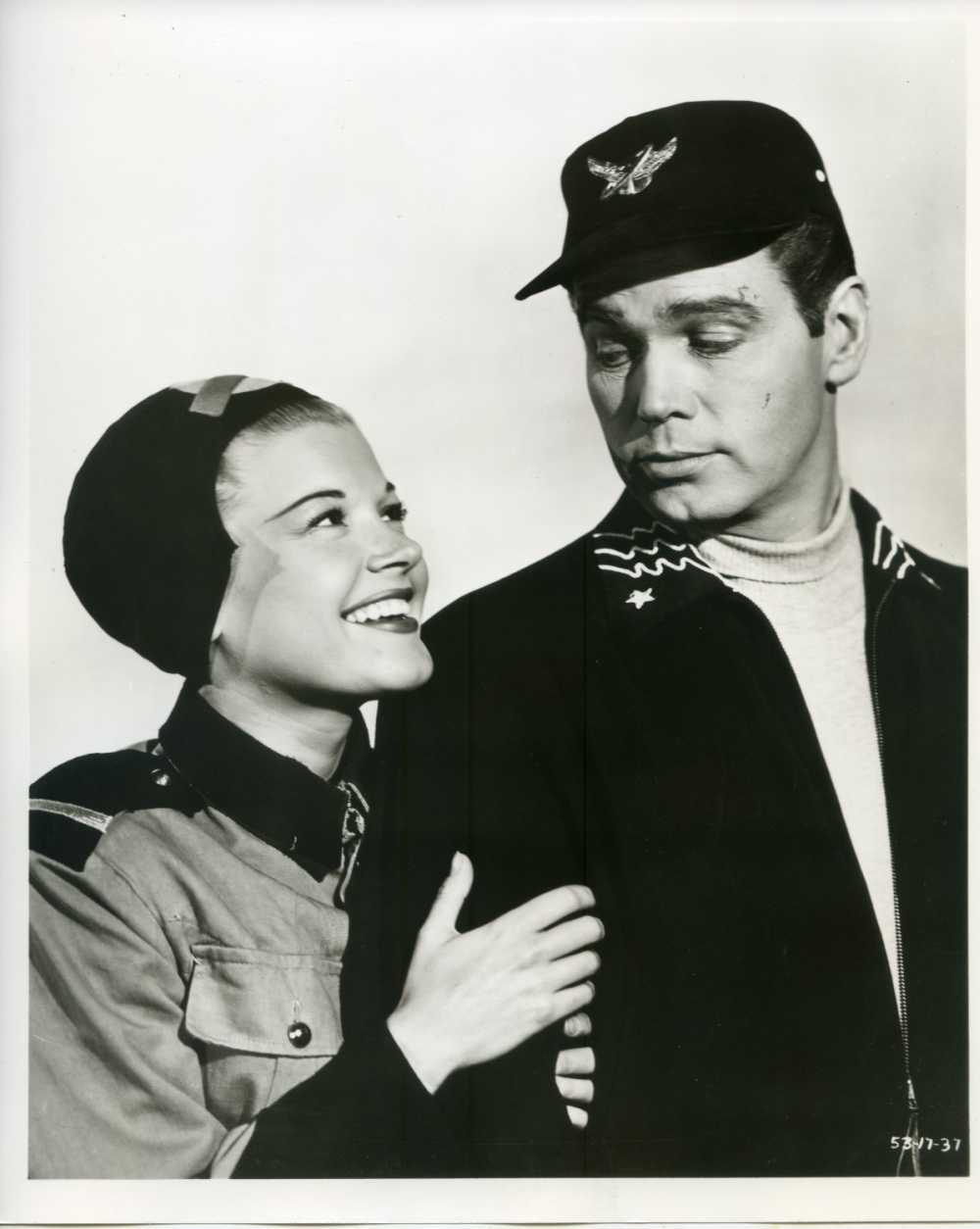 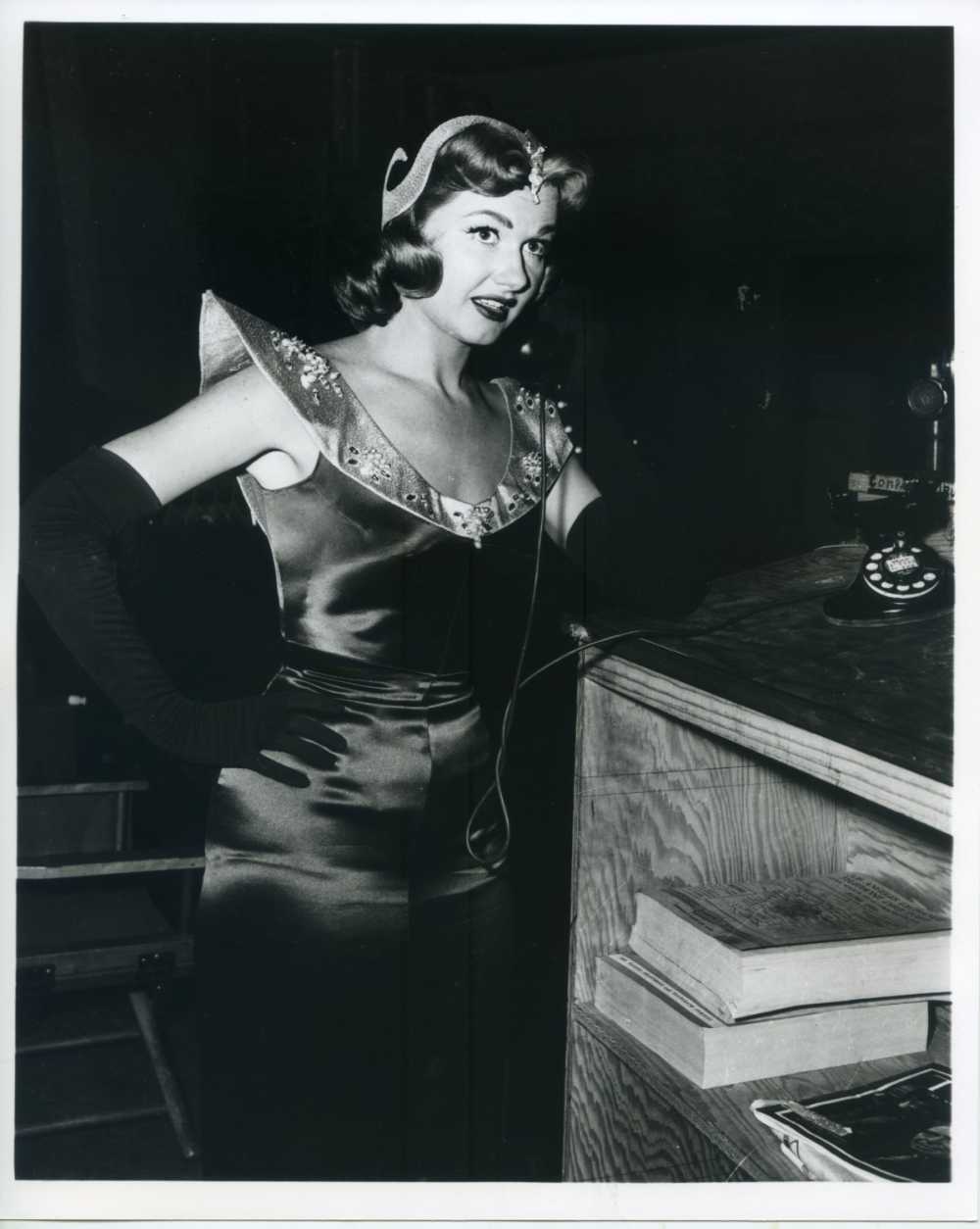 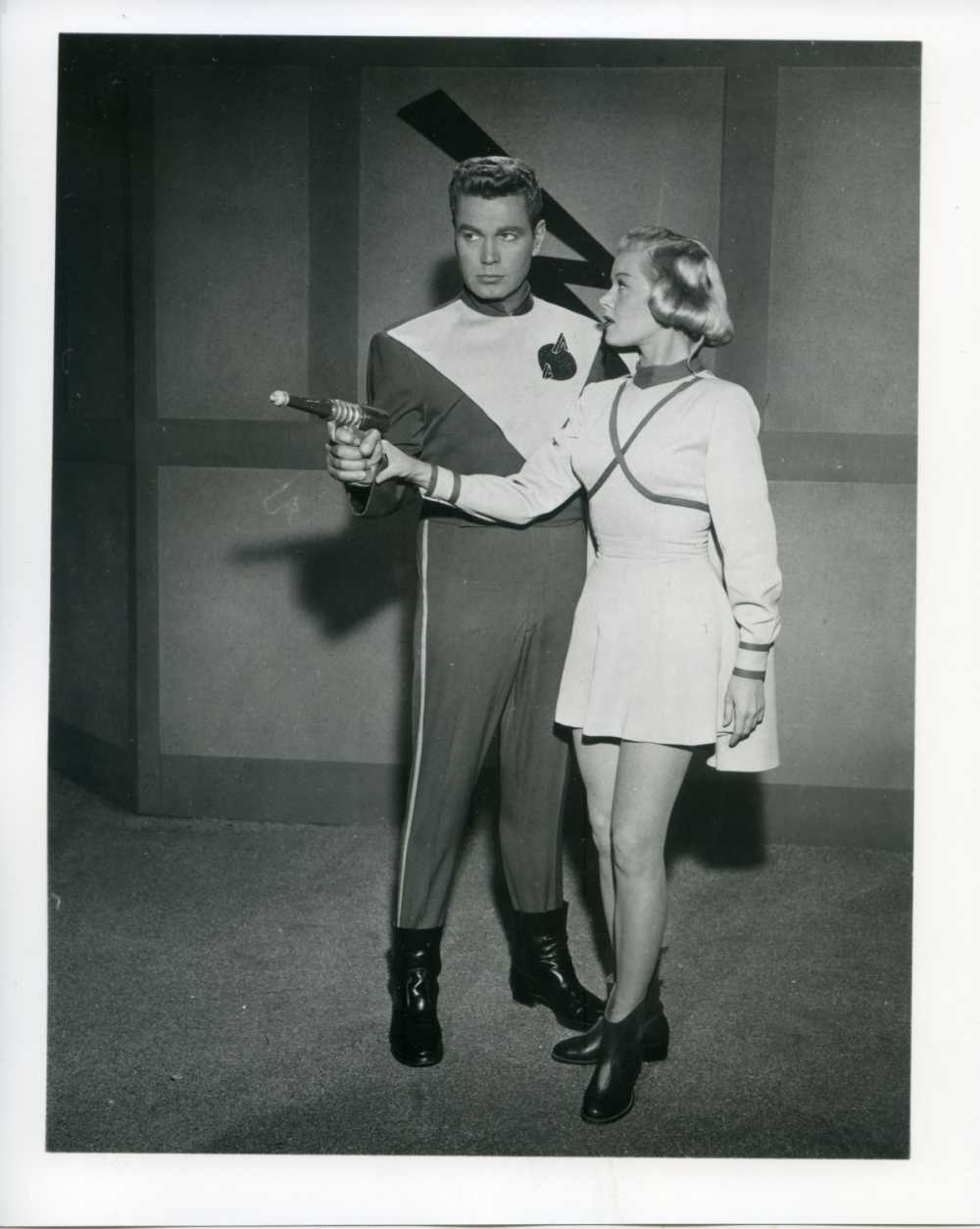 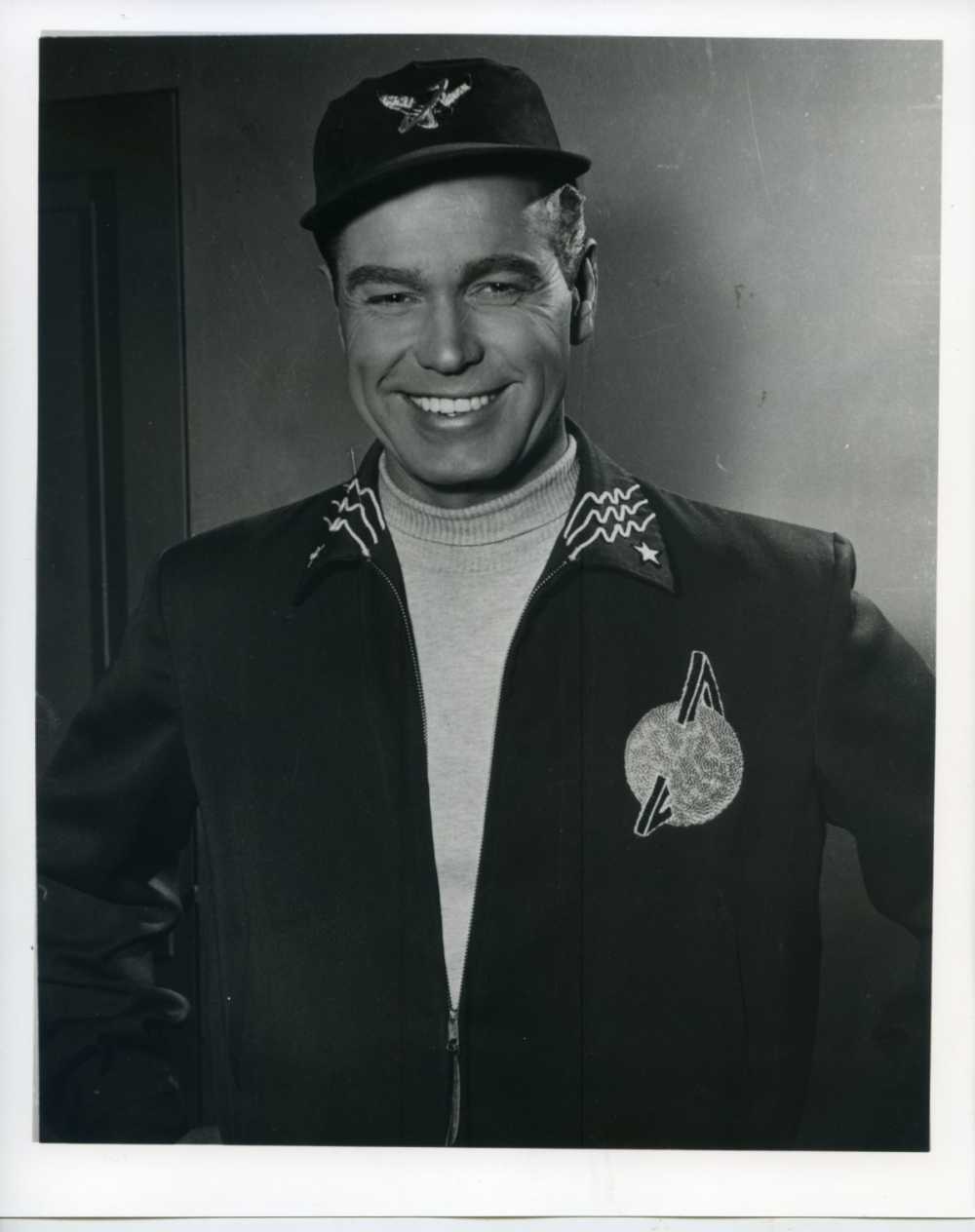 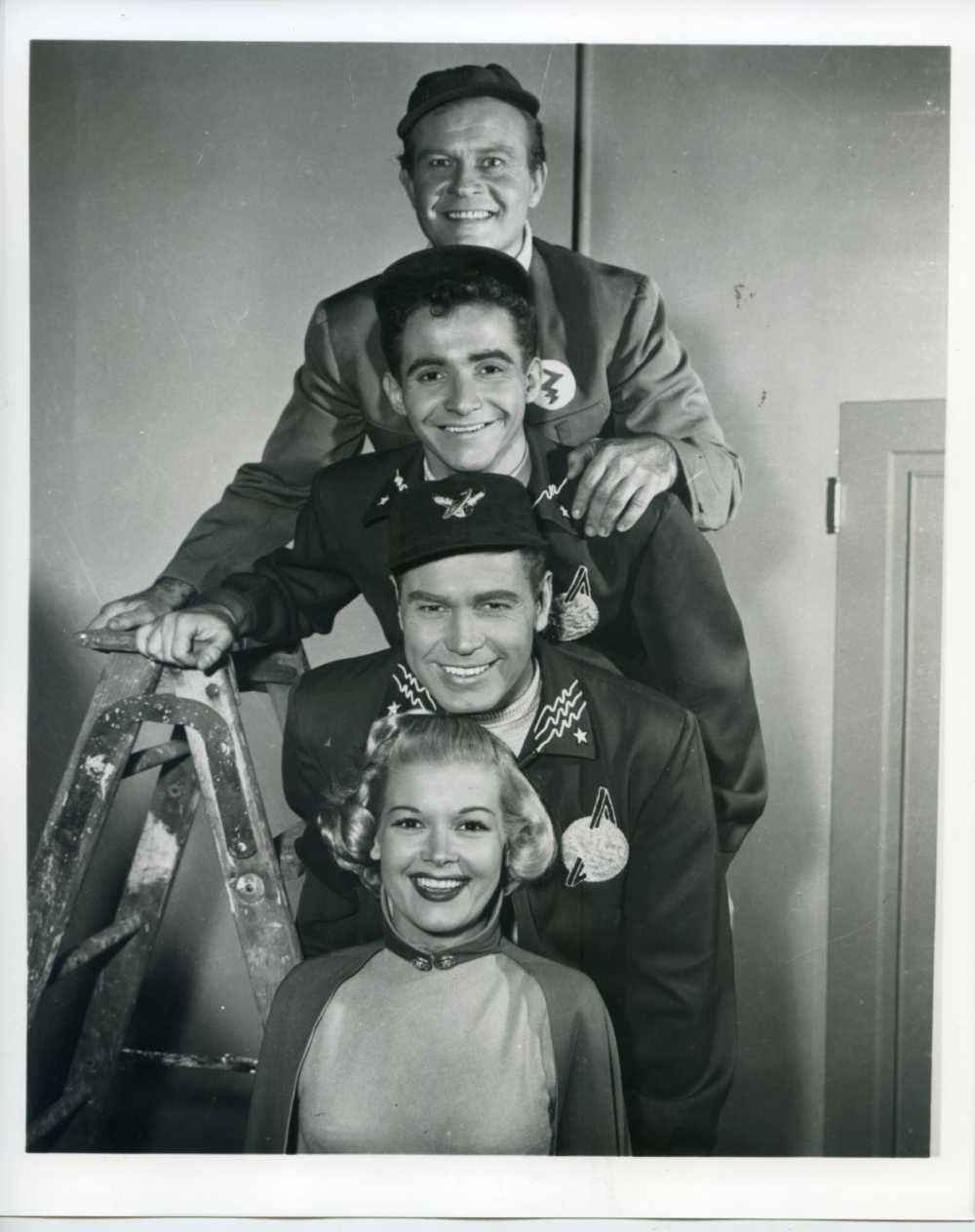 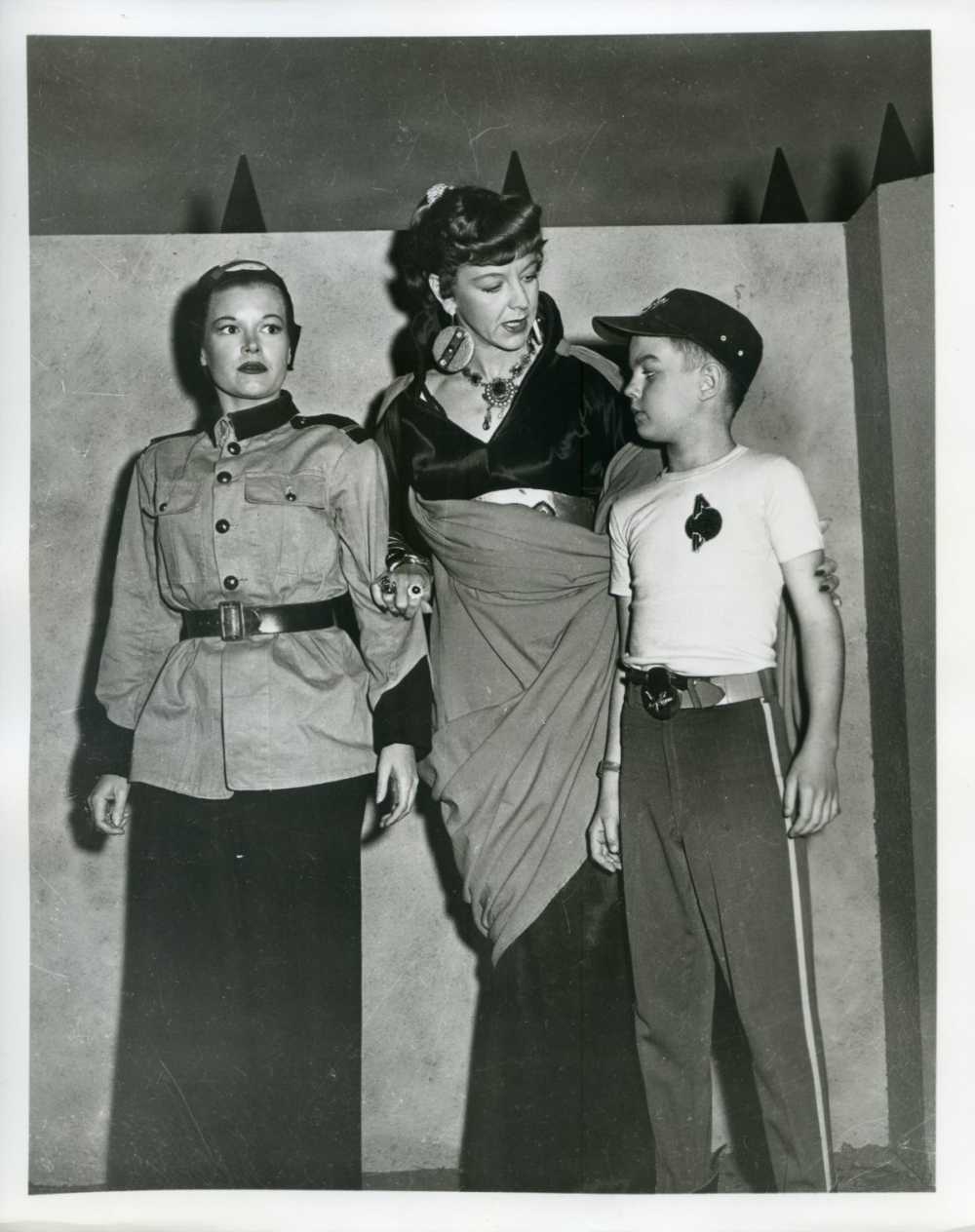 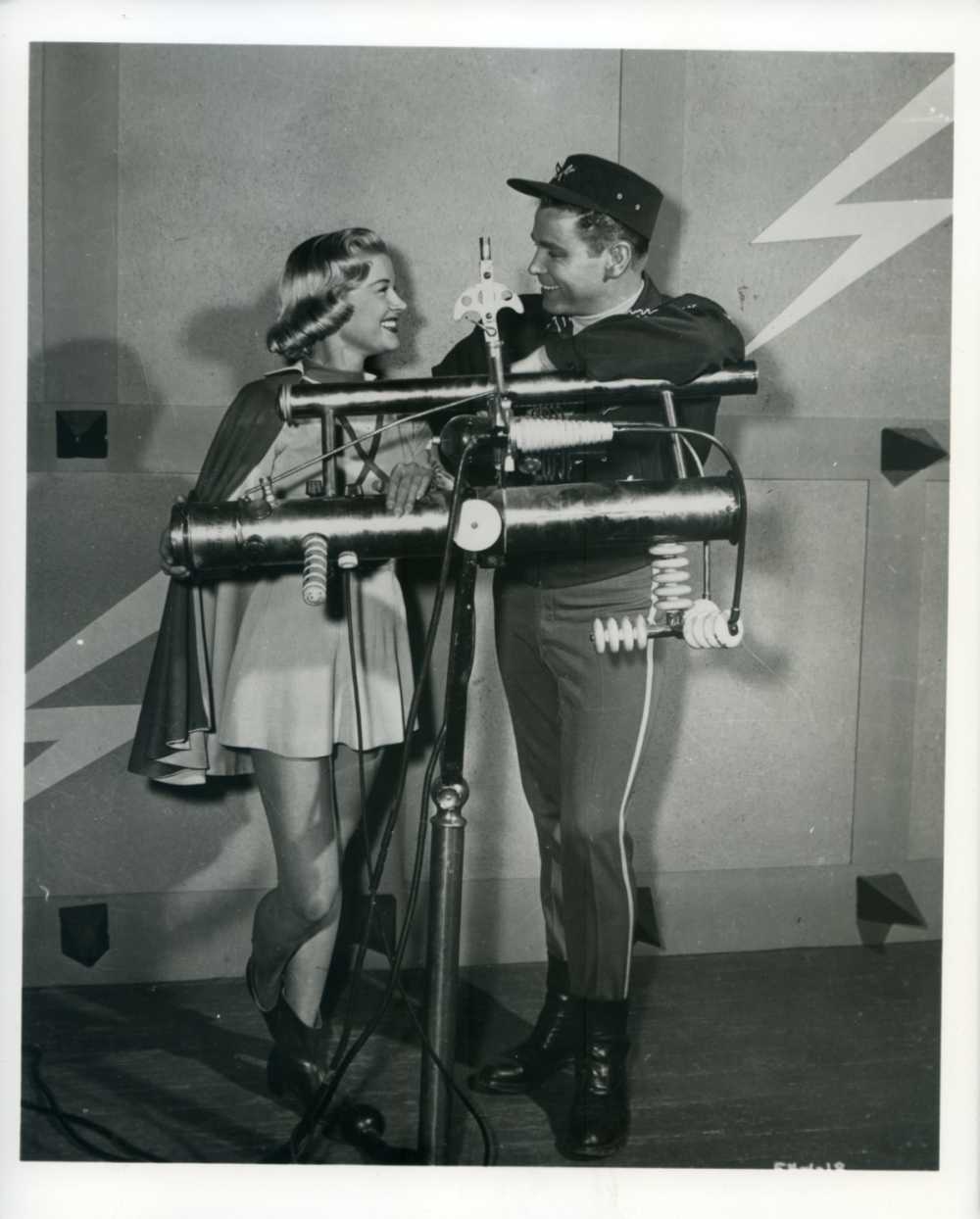 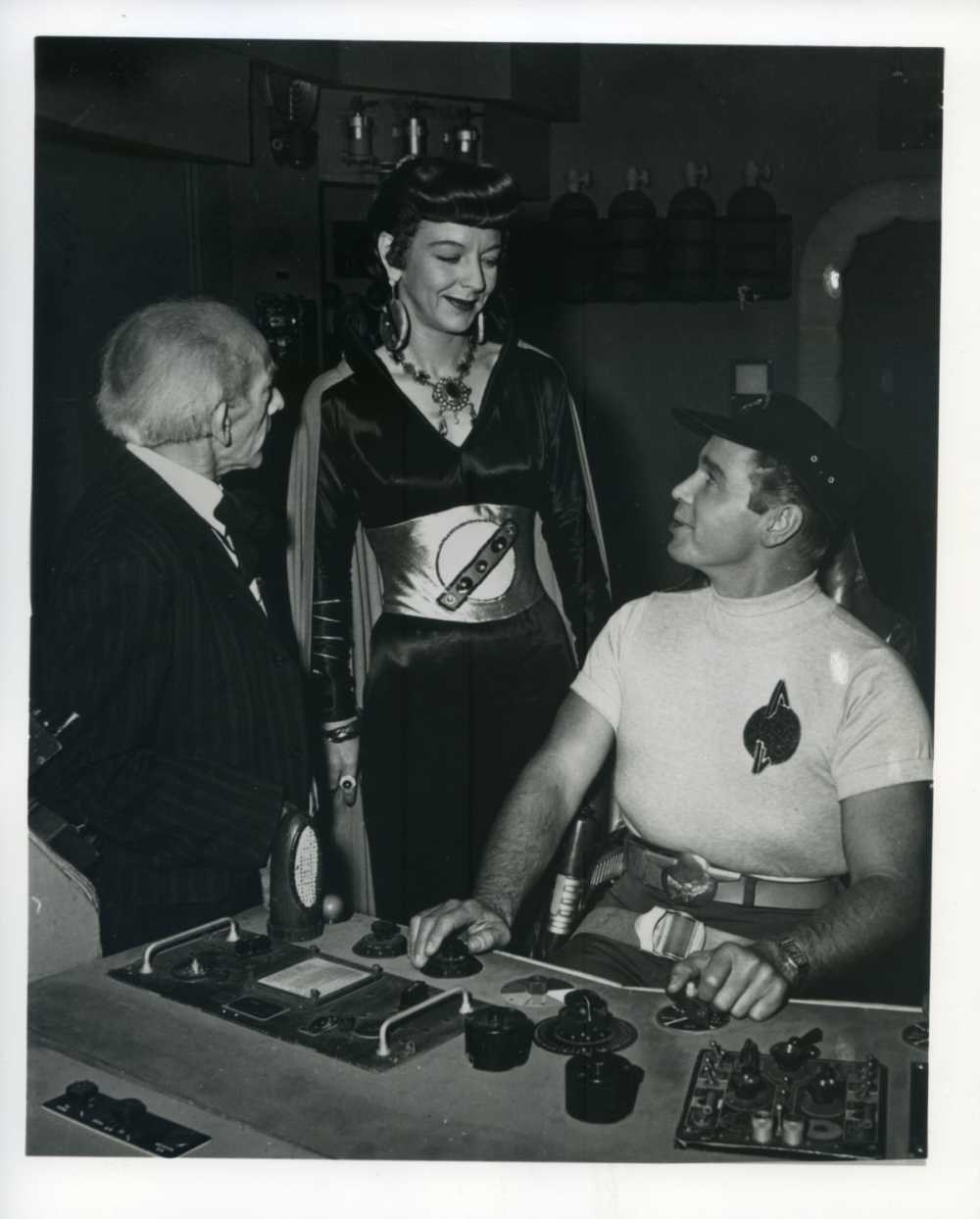 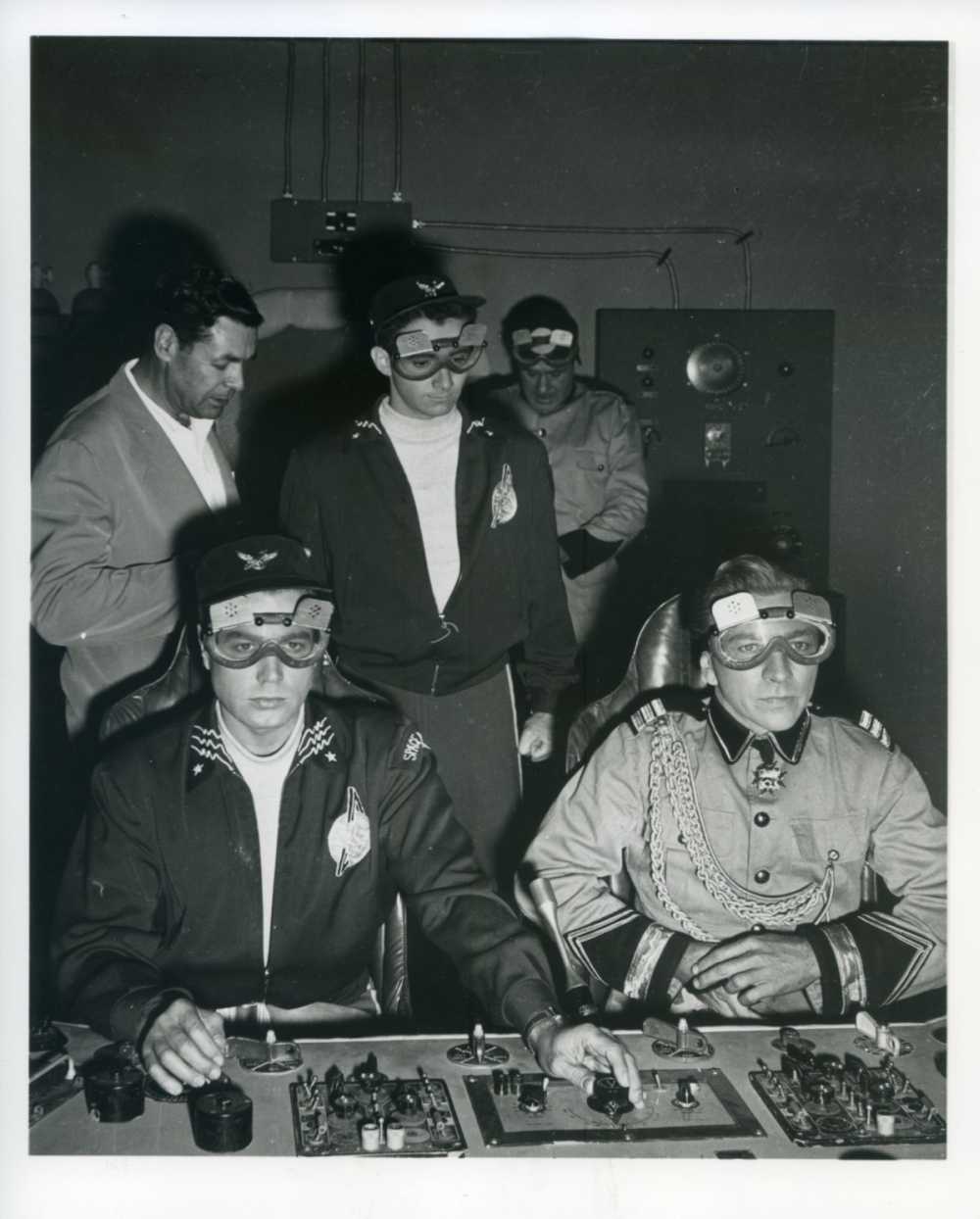 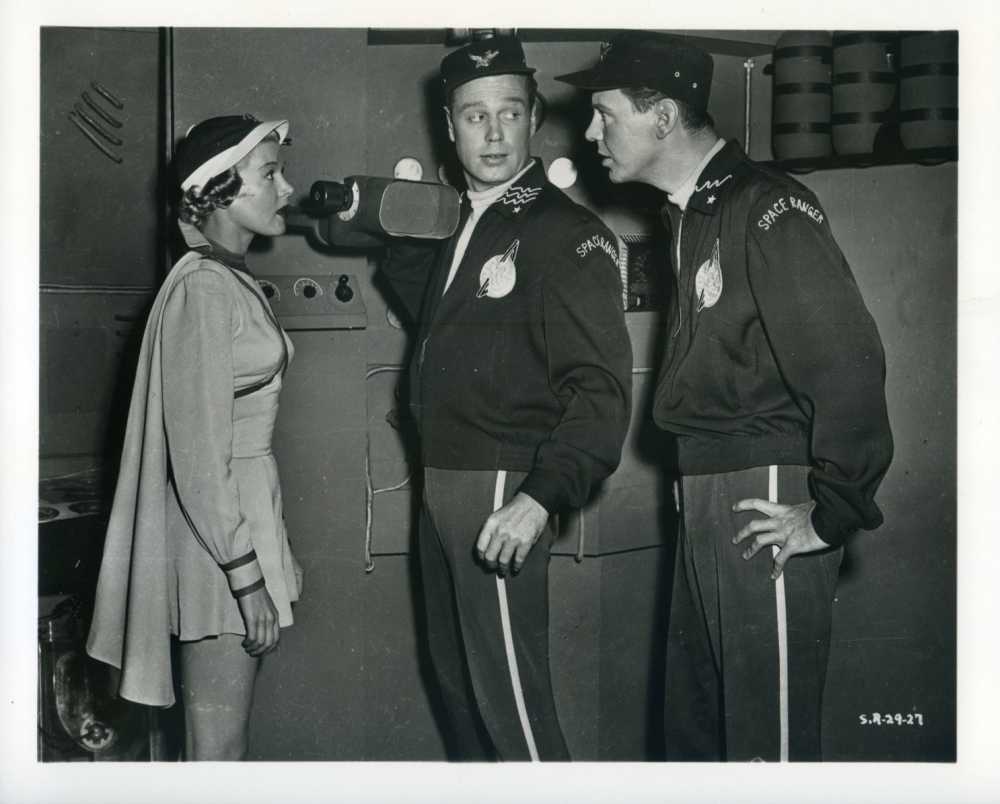 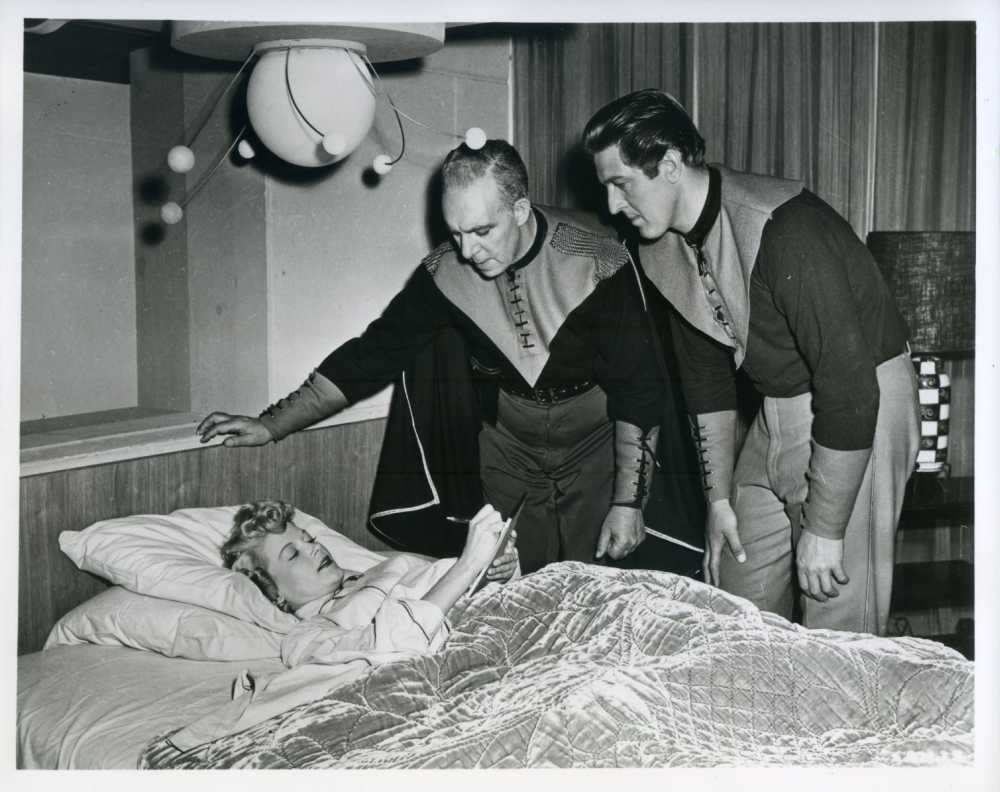 Steve Cowdin and I, both Grantham Stardust owners, continue to scour the lost movies and tv shows of the 50s in hopes of finding more Stardusts that “pop” into our viewing field.  Some years back we found another tv show that featured a Grantham Stardust.  This was the show called “Mr. North” starring Dick Denning – more about that show in a future story here at “Forgotten Fiberglass.”

For those of you who want to learn more about Rocky Jones click here to visit the Wikipedia page on this topic.  You can even see many of the Rocky Jones episodes on YouTube – click here to see what you can “see.”