It’s taken me about 5 years of research on this one but now I can say…this is a two-part article., and today is part 1 of this series.  For years all I had was this article and at the end was the teaser that said they were going to use a fiberglass body to complete the job.  I never located more information about it but recently…I found “the rest of the story” in a different magazine.  As I always say….. I’d rather be “lucky” than “good.”

So…I’ll leave you in suspense until part 2 of this article, and for now let’s see what gang at Capistrano Union High School were building back in ’53 and ’54. 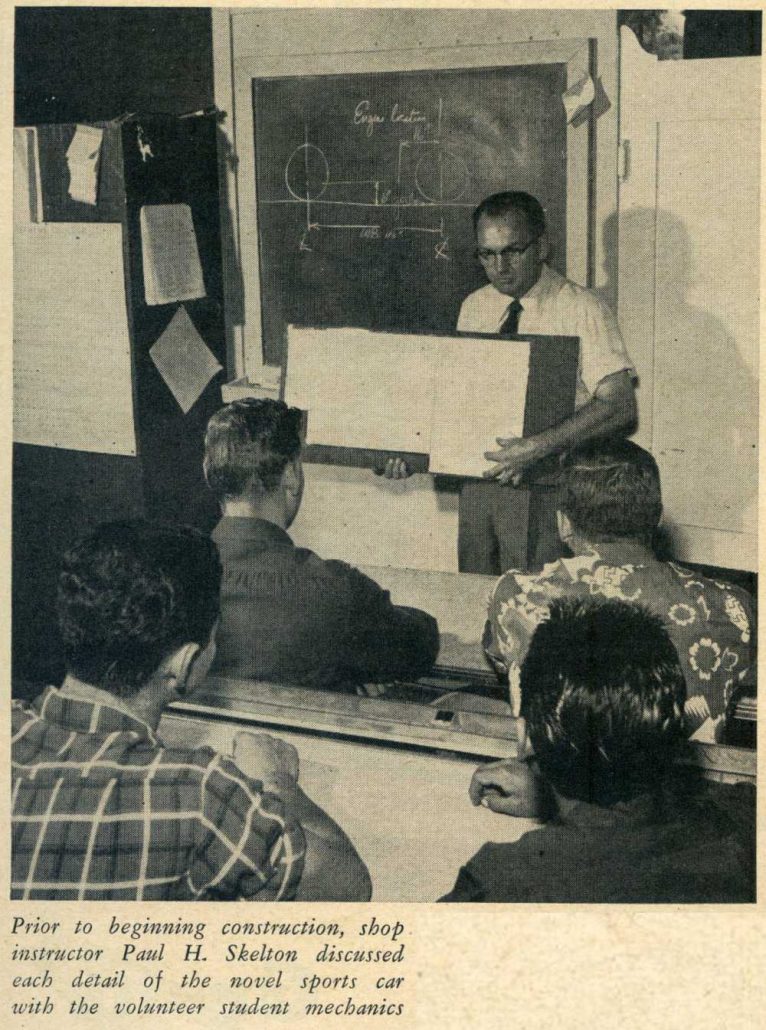 “I have wanted to build a sports car for a long time,” Skelton told me, as we sat in a schoolroom next to the shop where his two-seater was taking shape.  “Periodically, the class makes field trips to auto factories and custom body builders.  Visiting these places seemed to feed an already burning interest the class and I had for fabricating a sports car.  Then, during last Christmas vacation, I decided to go ahead.”

Paul Skelton stuffed a handful of bills into the desk drawer, smiled, and said” The whole car will cost something over $1200 by the time we’re through.  Even though my wife doesn’t know that yet, the educational benefits have been worth every penny of it.” 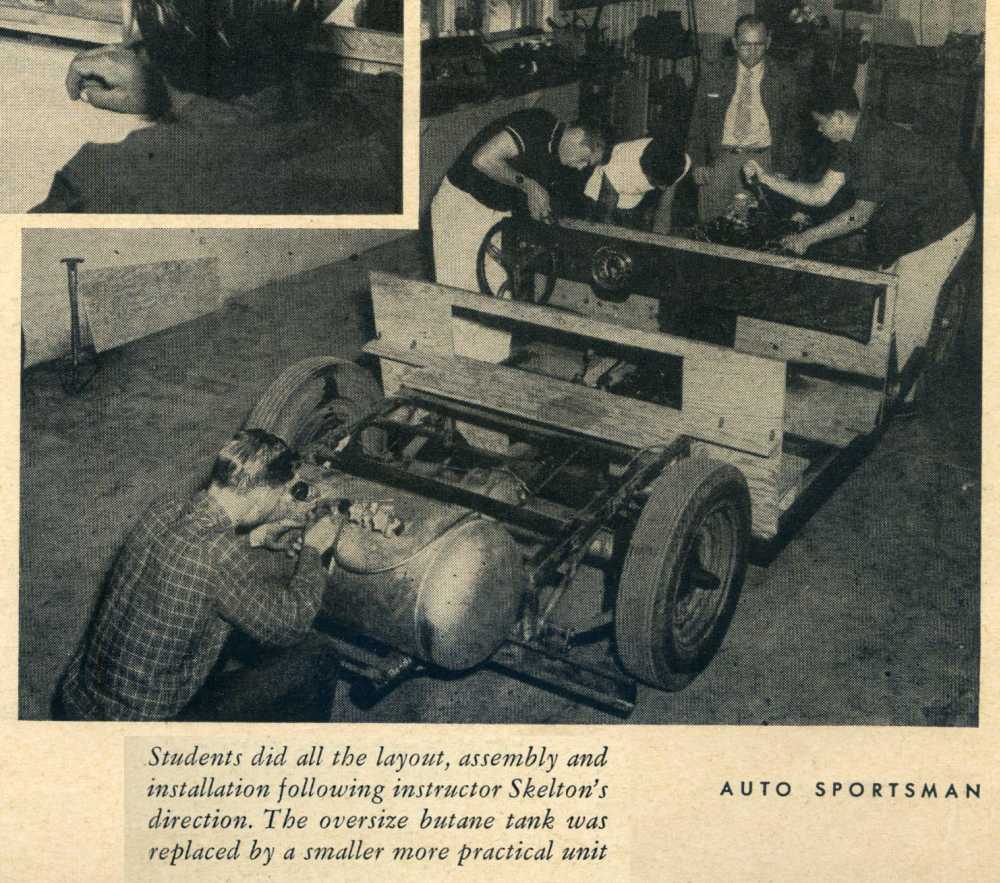 To obtain the necessary permission, Mr. Skelton consulted with Edwin a. Anderson, who is school administrator and district superintendent.  The question of financing and subsequent ownership was settled when Skelton offered to pay for all materials.

Four boys were chosen from among the many volunteers to be primarily responsible for the car’s construction.  Students were selected on the basis of mechanical competence, personal dependability and genuine interest.  Oldest of the four boys is Harry Boessler, a 19 year old senior and direct descendant of an early-day mission indian. 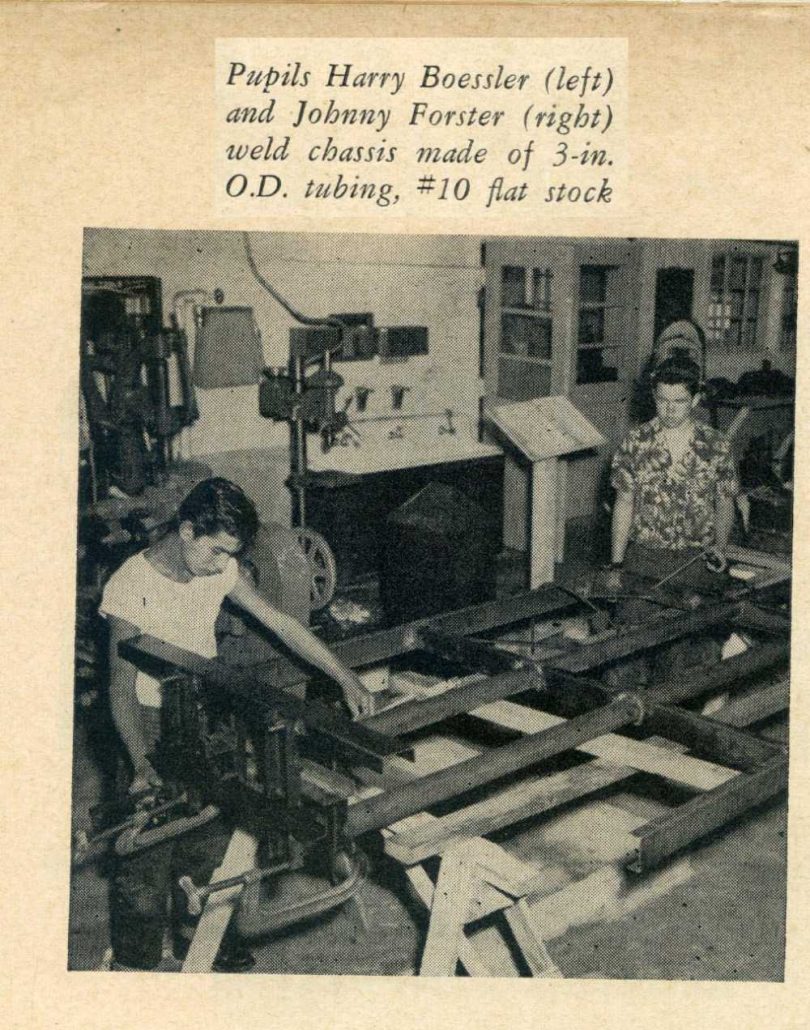 Working as a part-time mechanic in San Clemente, California, Harry expects to be drafted into the service sometime in June and hopes to continue in auto mechanical repairing in Ordnance or some other motorized branch of the service.

Next eldest is 17 year old Johnny Forster who is also a senior at Capistrano.  Already accepted by the University of Notre Dame (South Bend, Indiana), Johnny will begin the fall term there.  He expects to join the Air Force Reserve Officers’ Training Corps and, with experience in flight training, will become a second lieutenant qualifying as an aeronautical engineer. 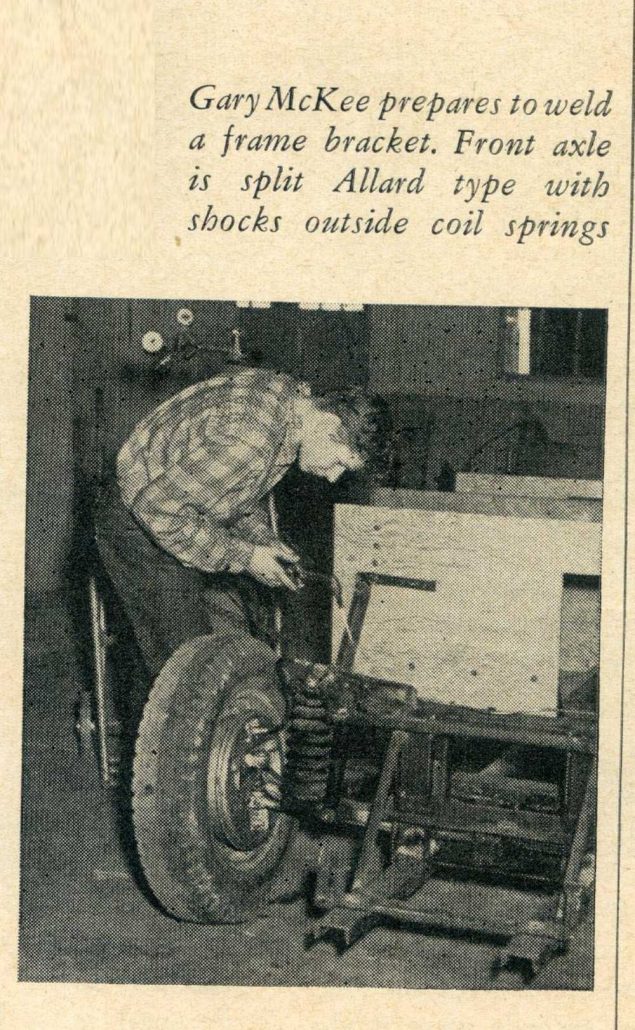 Early Miller, the youngest (16 years old) senior of the group, has applied for a scholarship to California Polytechnic at San Luis Obispo, California.  Here he will study air conditioning and refrigeration.  He has also taken an entrance examination for the University of California at Berkeley.

Gary McKee, only junior in the group, is also 16 years old.  Since he will remain at Capistrano Union High for another year, he is still uncertain about college plans.  Gary wants to design, engineer, and build cars.  The experience he has gained in Mr. Skelton’s class should be valuable in this field.

Shop instructor Skelton has no intention of using the car for competition.  For family pleasure, he slightly modified the original chassis design so they would have a safe, fast car.  The engine develops 150 horsepower on butane or propane, and the body will be a one-piece fiberglass shell. 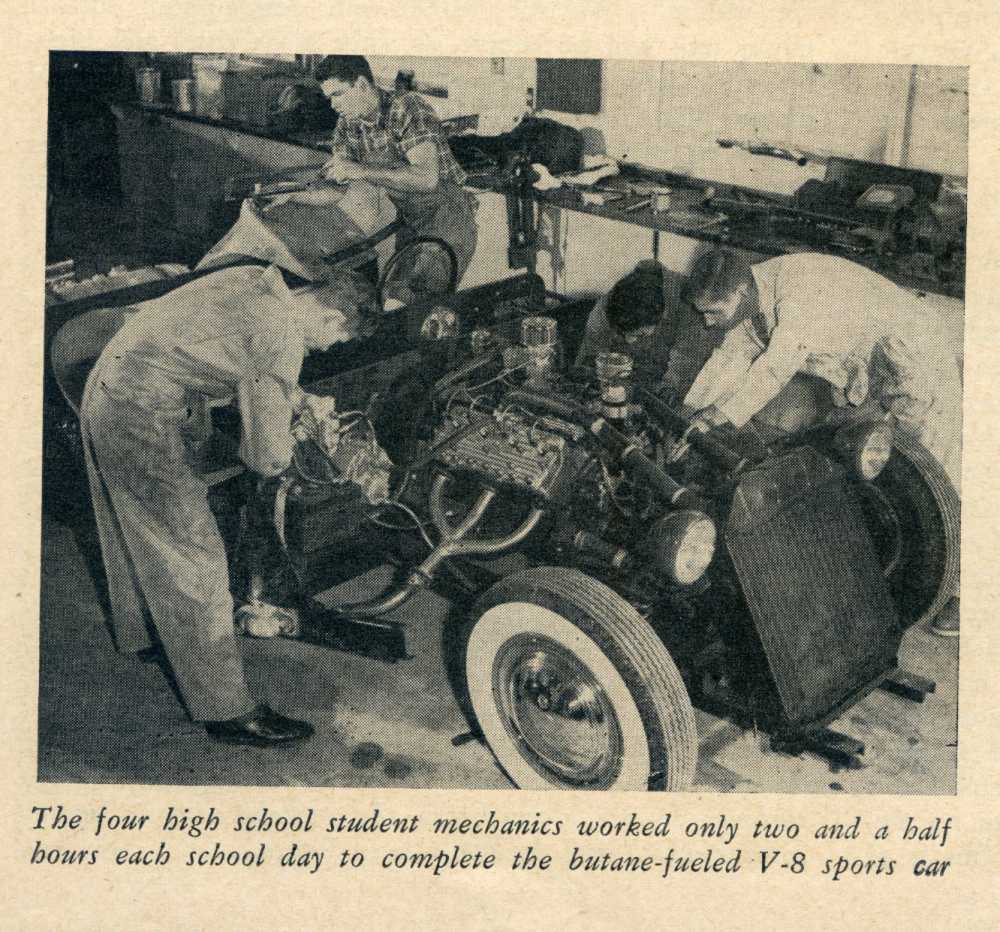 So what body did they choose?  You’ll have to tune into a future story hear at Forgotten Fiberglass. 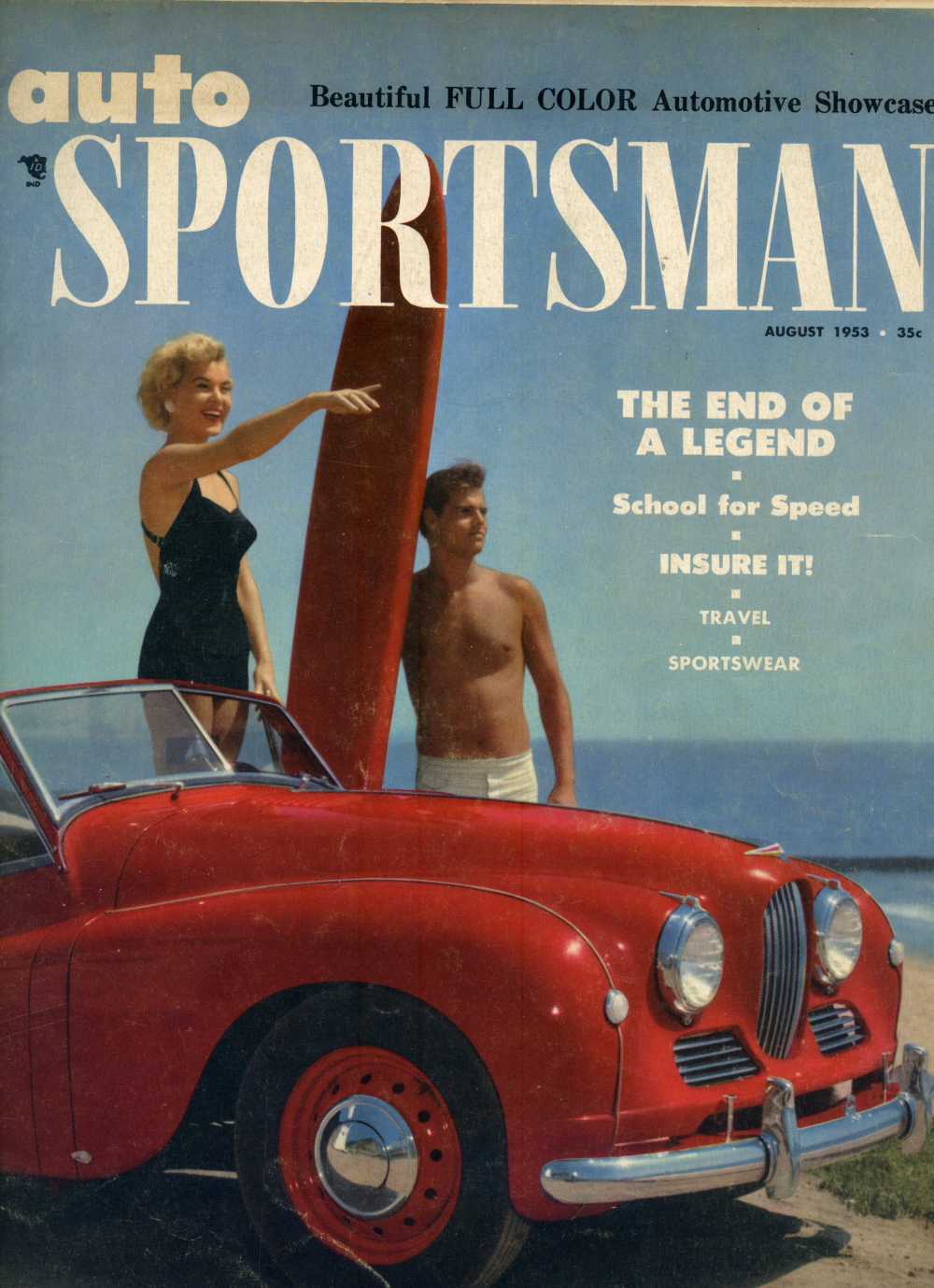 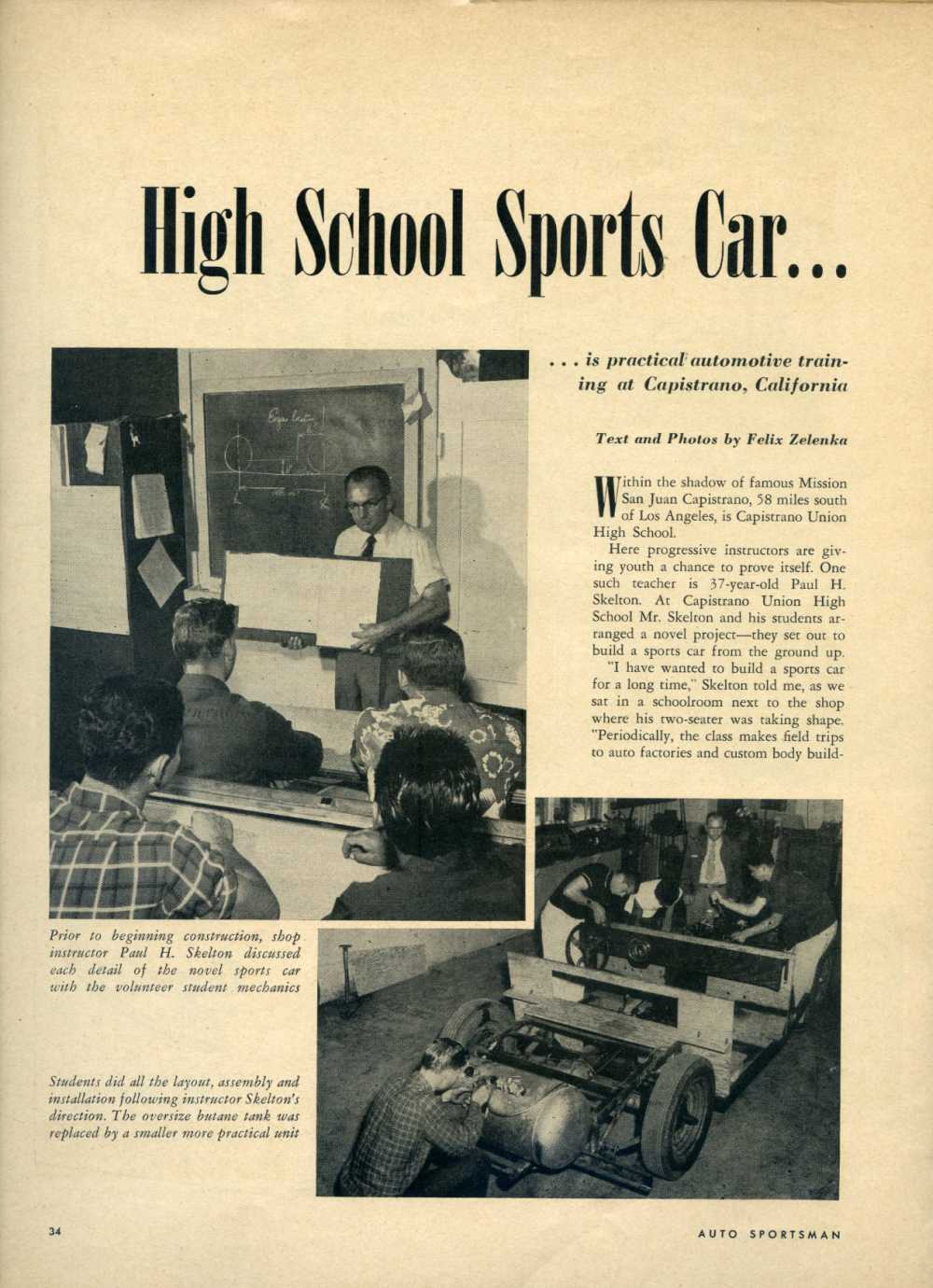 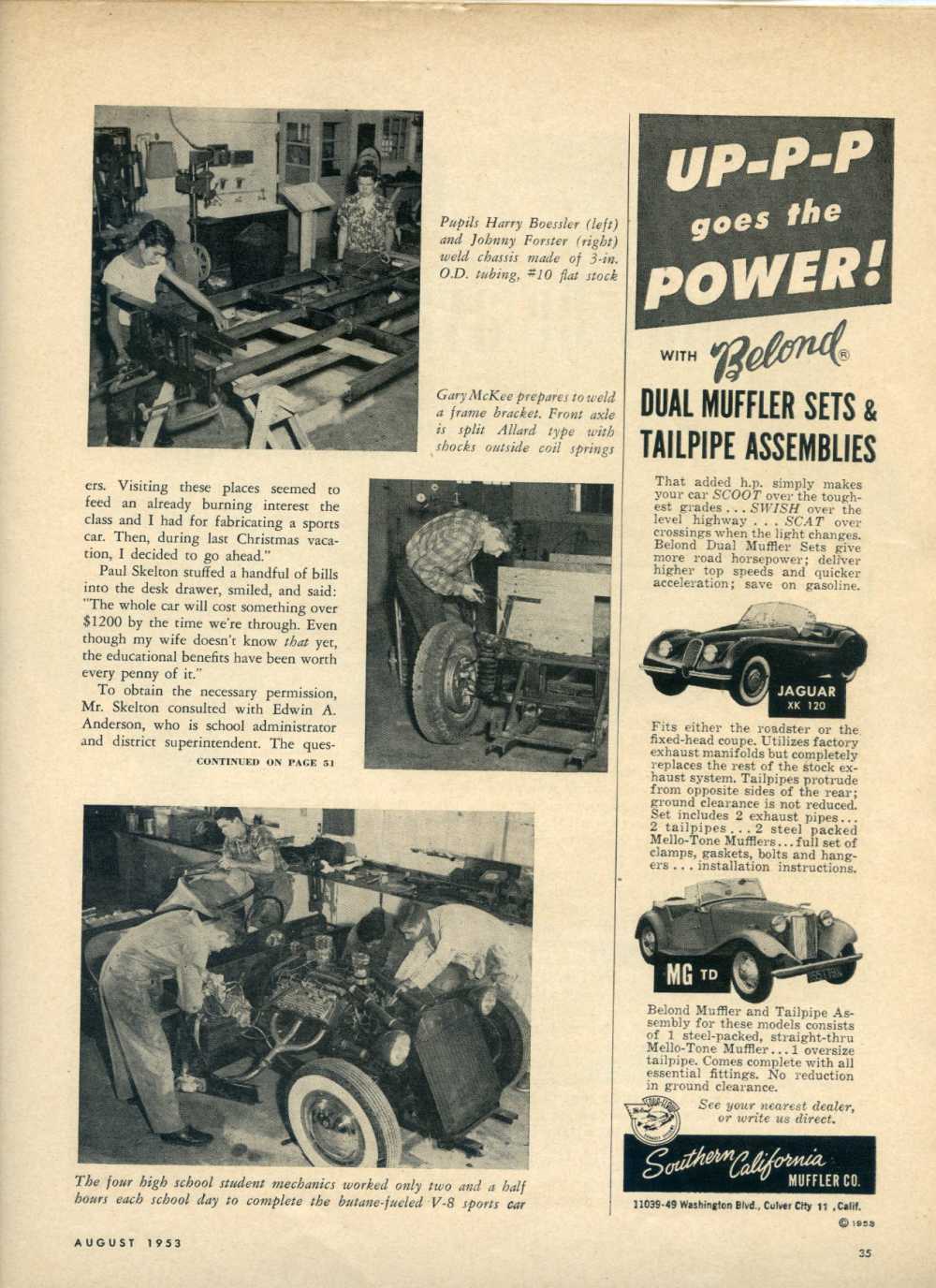 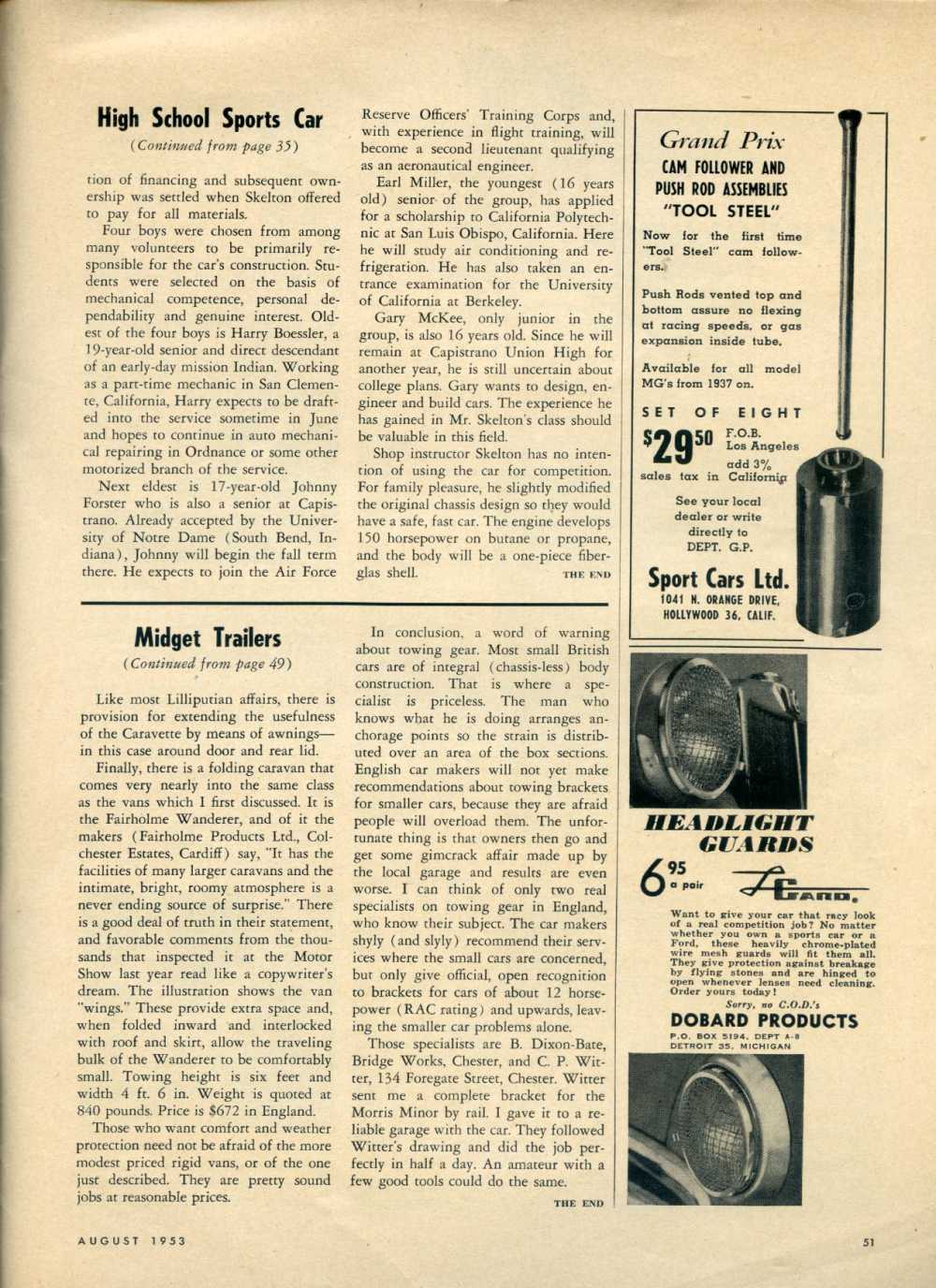