When good friend and automotive historian Bob Cunningham shared a photo he saw on the internet that featured the 1946 Darrin fiberglass car and Santa Claus – I was hooked and had to have it.  The photo, that is.  Here’s what Bob had found: 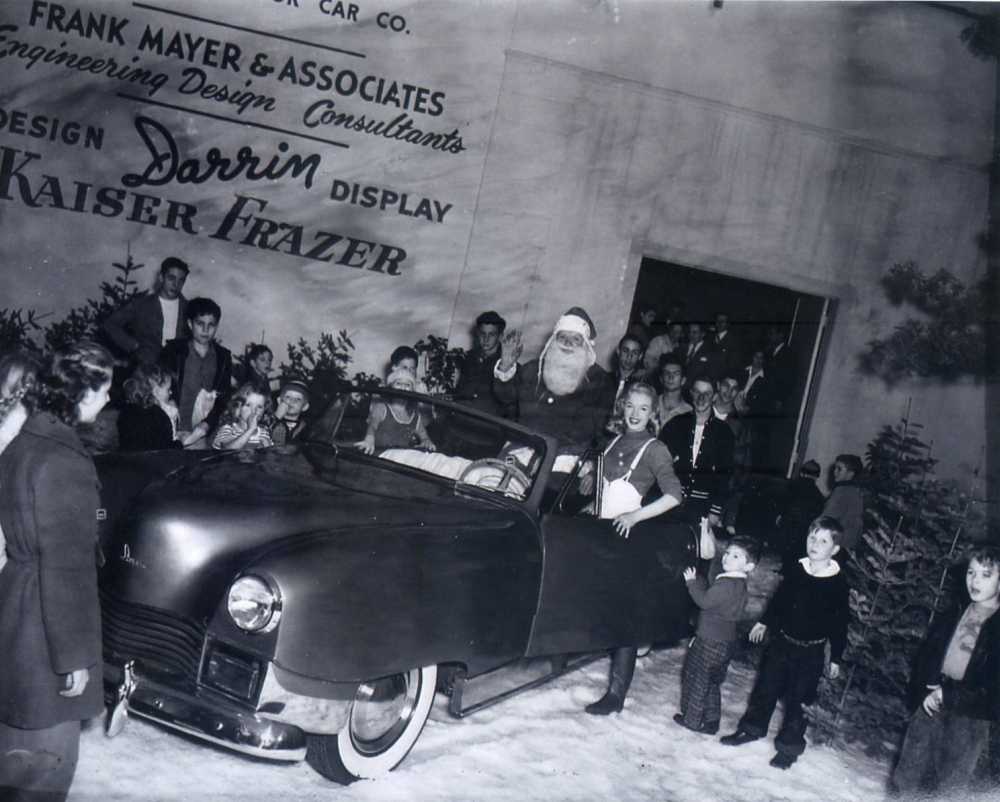 Darrin was a stylist working with the Kaiser-Frazer company during and after the World War II, and he was involved in the styling of the cars that debuted in 1947.  You can see the similarity of the design of his plastic car to the 1947 Frazer and the 1947 Kaiser – both shown below. 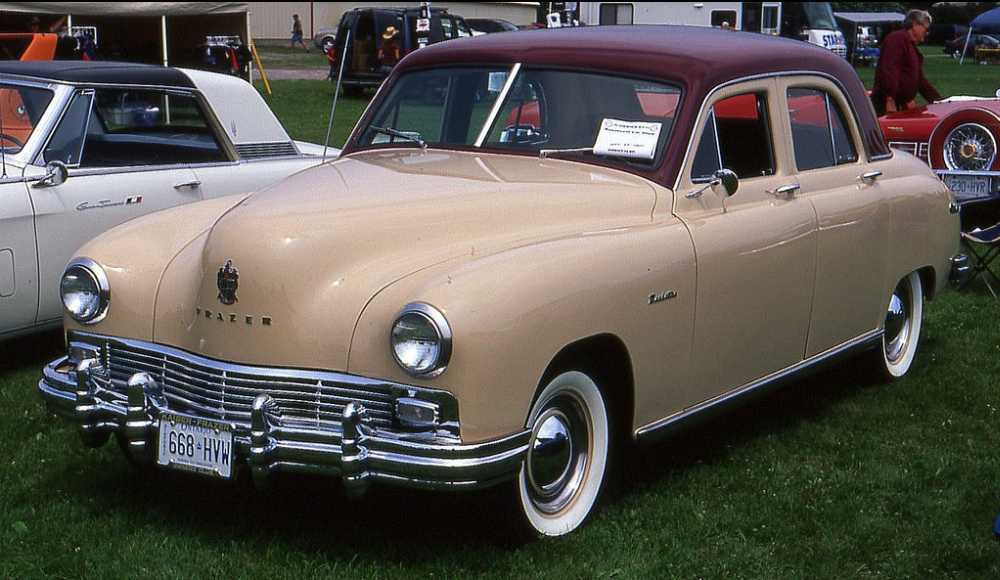 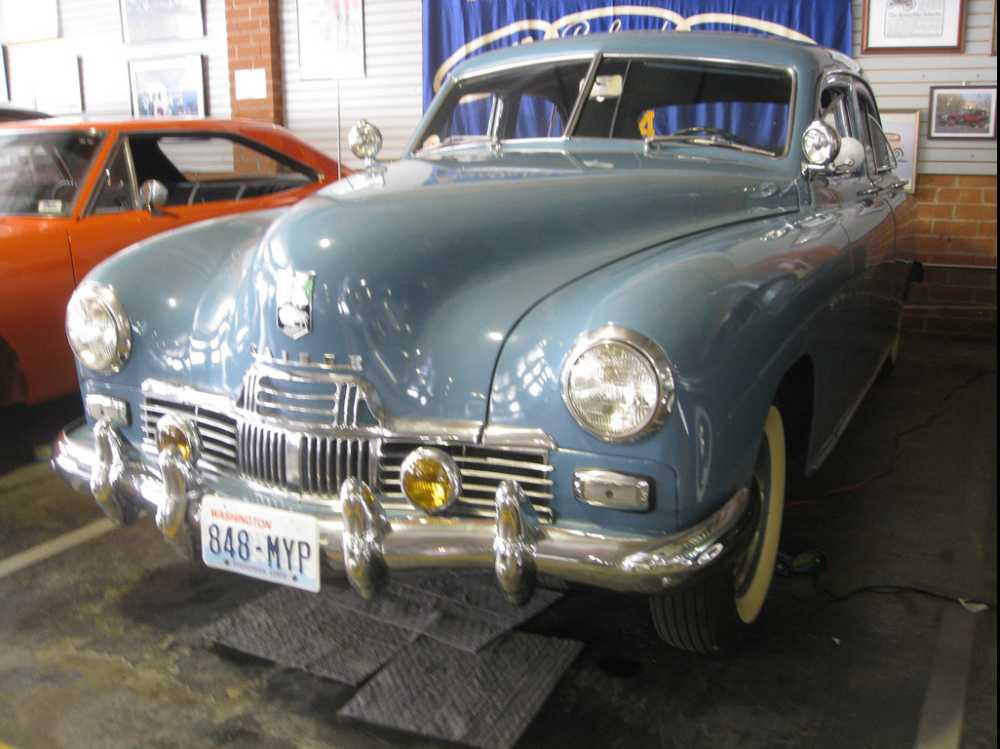 But, as usual, I wanted to learn more about this this holiday photo showing the ’46 car.  For example, where was the photo taken, when was it taken, is there significance of the wording shown behind the car, who are the people surrounding the car, etc.

I’m honored that Darrin’s son, Patrick, has made himself available to help with questions such as this, so I sent him the photo and asked for his reply, and here’s  what he shared:

Geoff, I don’t know other than this was a Christmas promotion. By the way, that’s Marilyn Monroe next to car.  She went out with my brother Bob.  Best, Pat Darrin.

Okay….that’s a surprise!  So…here are a few close-ups of Marilyn with the 1946 Darrin car: 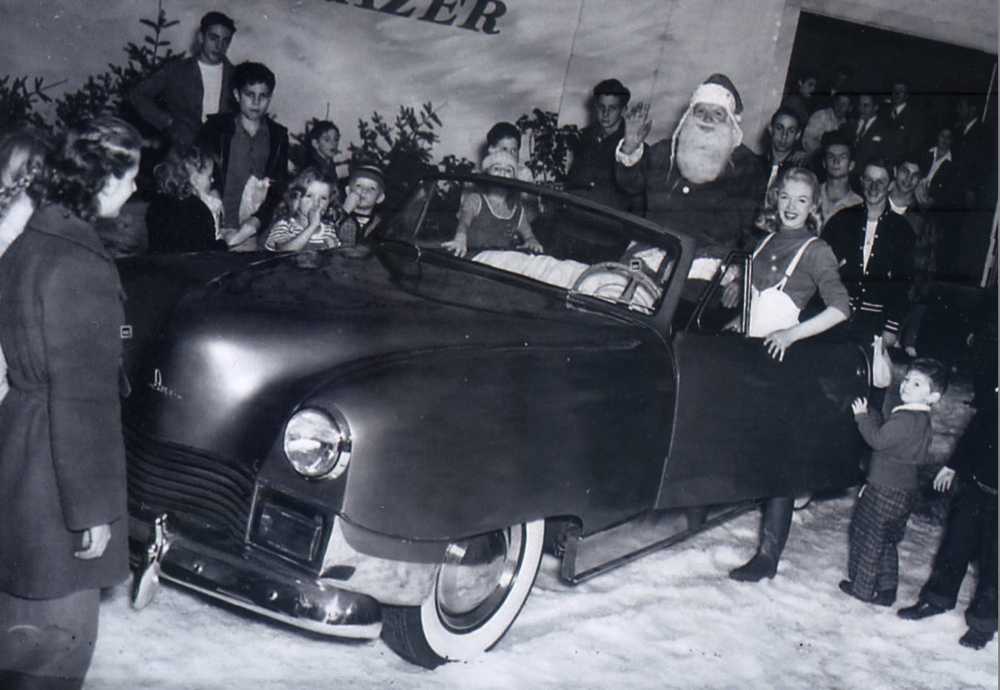 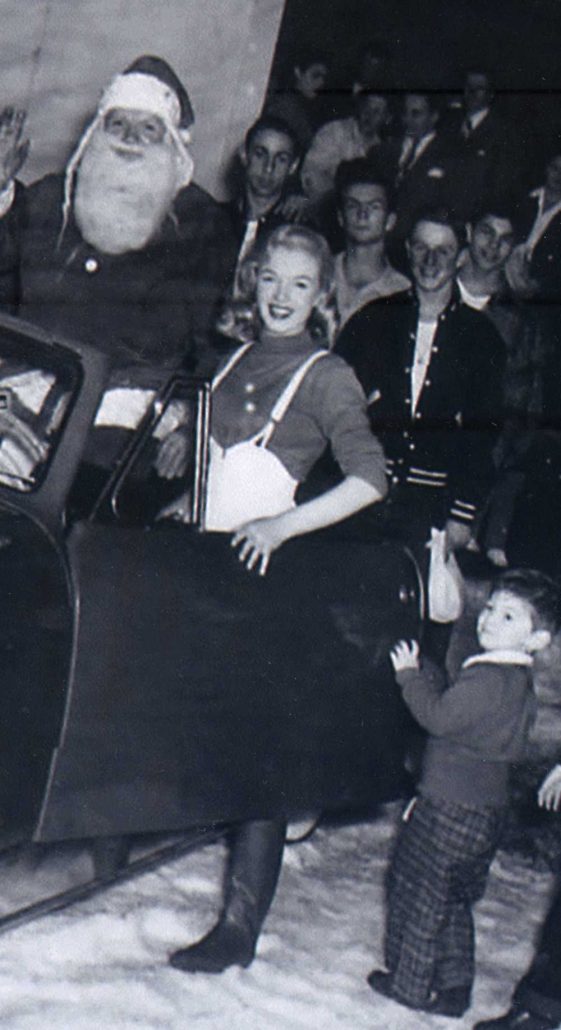 Some of the best gifts come as surprises, and the information from Pat was great fun to learn.  Marilyn Monroe would have been 20 years old in 1946, so if we assume the photo was taken during the holidays in the same year – everything seems about right.

But what about the location?  There’s snow on the ground, and the name “Frank Mayer & Associates” appears on the banner or building in the background.  Perhaps this was the company that had to do with the “design display” for this car or the Kaiser-Frazer line?  Luckily Frank Mayer & Associates is still around, and here’s what is shared on their website (http://www.frankmayer.com/) about their history:

Founded in 1931, Frank Mayer and Associates, Inc. is a third generation, family-owned company based in Grafton, Wisconsin. Built on a strong foundation, Frank Mayer and Associates, Inc. started out as a one-man sign painting company which evolved into an innovative screen printing operation. Throughout the years, we have embraced transforming design concepts and ideas into a reality within the in-store merchandising industry.

So it’s possible that this company was associated with Kaiser-Frazer, Dutch Darrin, or both.  Inquiring minds would like to know.

Was this photo taken in Wisconsin?  There’s snow on the ground, so perhaps.  Did this innovative plastic car travel around the country for display purposes?  Or….was there a bit of “Hollywood” magic going on with the entire scene setup to look like it was Christmas time up north, but the photo shoot was actually done in Los Angeles – close to the Darrin home and Hollywood?  I’d love to know more.

Anyone want to help sort out more of the history?  This question is quite worthwhile as this is one of America’s first postwar fiberglass cars to debut and was shown to the public at large.  A great story to tell, no doubt 🙂