Ok…the thumbnail picture of Hemmings Motor News Magazine with a 1954 Venus on it hasn’t happened yet.

But we’re getting closer 🙂

Rick D’Louhy and I have taken our message of fiberglass sports cars to all parts of the continent.  When we couldn’t travel, we’ve sent our message out near and far via the internet.  Think of us as the Paul Revere of fiberglass.. 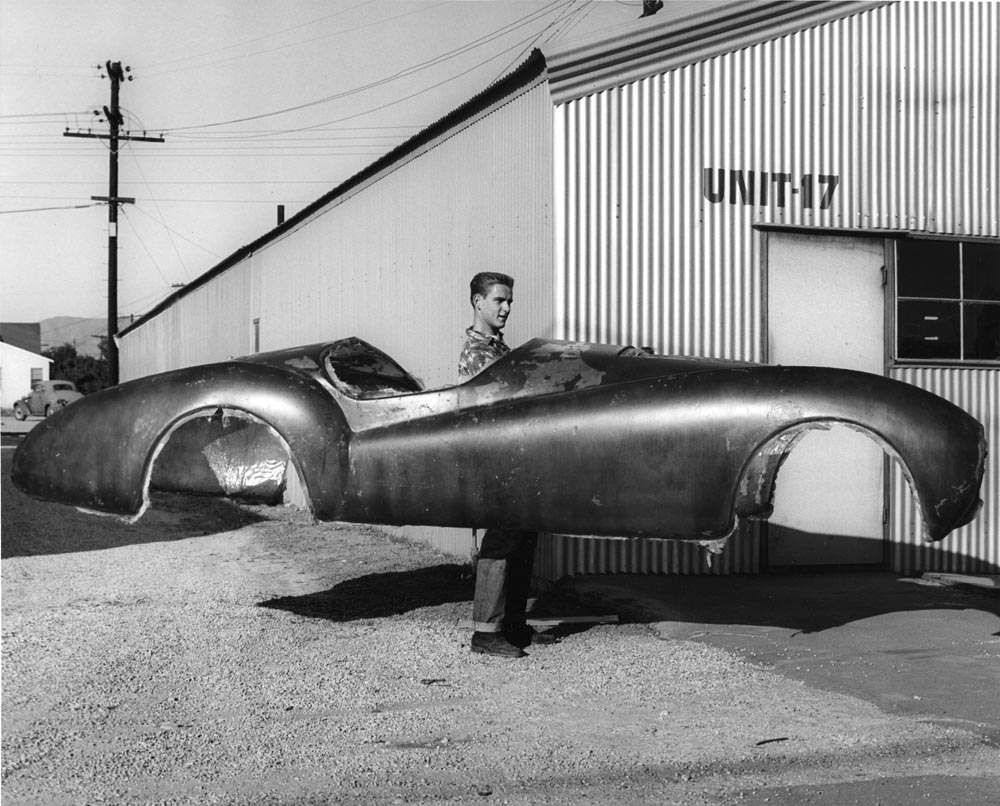 But we’re not the only folks carrying the message anymore.  Others who are part of our group are taking notice and putting their own spin together and taking their own message to their troops – and beyond.  And I’m proud to say that’s  happening more and more as we progress in our research and with our “Forgotten Fiberglass Fanatics” – that’s you.

This month in Hemmings Motor News, good friend and author Daniel Strohl has taken the message of “fiberglass” and put a shot across the bow of car enthusiasts across the world.  Like us, he has embraced the material made popular in the automobile industry back in the 1950’s and challenges his readers to rethink their beliefs on the utility of the materials and its relevance to the automobile hobby.

We’ve come a long way since Daniel and I met via the Hemmings Blog on April 22nd 2008.  Click here to read this post on Hemmings Blog.  On that day, Daniel wrote:

“Research into 1950s fiberglass cars, both kit and independent production, sorely lacks. There’s a little bit on the Kellison, a little bit on the LaDawri, and not much beyond. Thus, we can understand why Stephen O’Brien doesn’t know much about the fiberglass-bodied car in the above picture, even though he owned it for a brief time in the mid-1950s.” 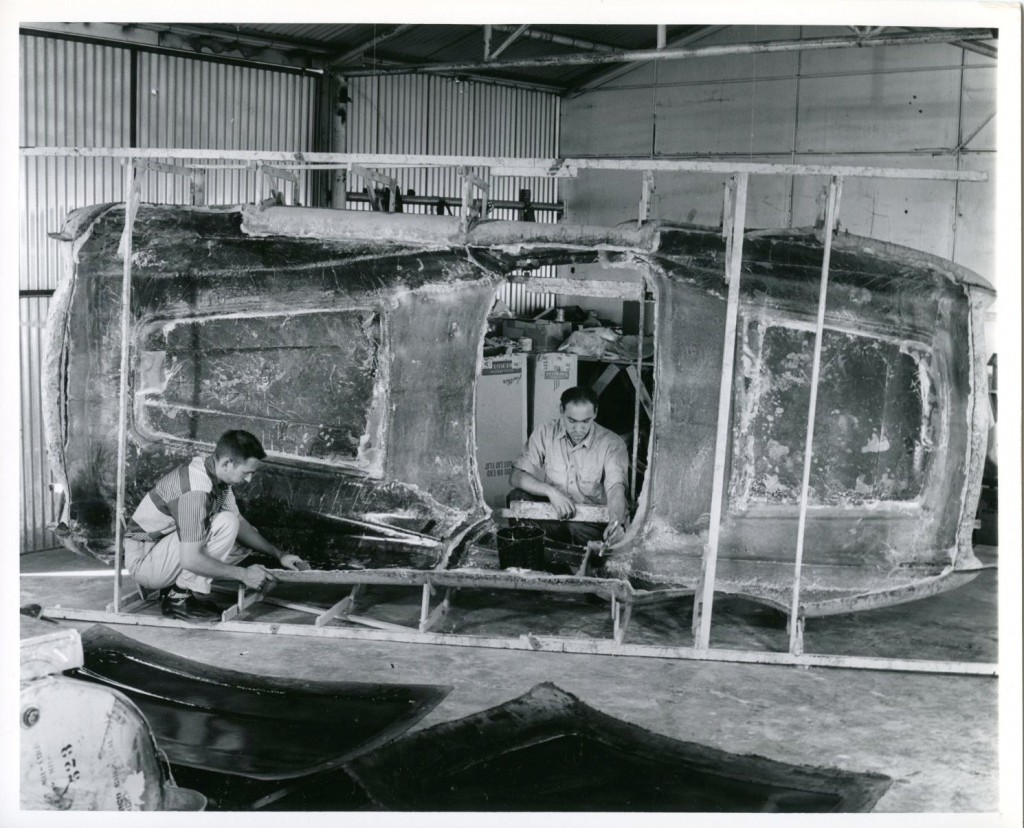 Doc Boyce Smith and Unknown Employee Setting Up Mold At Victress Factory in 1953.

With permission from Daniel Strohl and Hemmings, Daniel has allowed us to reprint his article on “Hot Rods and Fiberglass Cars” that appears this month – the July 2011 issue of Hemmings Motor News.  We very much appreciate the honor of reprinting his article here and encourage those of you who are Hemmings Motor News fans such as myself to secure a copy (and/or a subscription) and get a chance to read all of the other articles that are now a monthly staple of this magazine and car hobby “bible.”

So…let’s dig in gang and expand our minds and challenge our thoughts.  Daniel Strohl….take it away…. 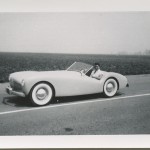 Frustrated by the lack of a decent response from Detroit to the onslaught of small sporty cars on America’s roads just after World War II, they took to their garages and workshops by the thousands. Using junkyard and war-surplus parts and their own ingenuity, along with a dash of spaceage technology, they turned out cars as individual as themselves, sleek and fast and capable of going head-to-head with the best sports cars England and the rest of Europe could muster.

They countered the imports everywhere they could—on road courses, on the street, in shows— and though the phenomenon for the most part started out in Southern California, it soon spread across the country and came to influence major automotive manufacturers. It’s a narrative all too often used to describe the post-war rise of hot rodding, but it equally applies to a nearly forgotten segment of the hobby with numerous tie-ins and parallels to hot rodding: the fiberglass body builders.

A little bit of background first: Though the invention of fiberglass, also known as glass-reinforced plastic, is commonly attributed to Owens-Corning in 1936, fiberglass-related patents date back to the late 19th century. Still, fiberglass remained relatively unknown until the search for new materials during World War II brought it into wider use. 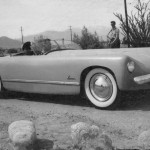 It wasn’t until about 1951 that the first fiberglass car bodies started to hit the market, the products of a number of men who wished to build their own sports cars without the expense of having a body crafted for them out of metal. Unlike later fiberglass ventures, these bodies from companies like Glasspar, Allied, Victress, Almquist, LaDawri, and dozens of others used largely unique designs and were sold simply as components, not kits.

The buyer was expected to provide the chassis (usually from a used or wrecked Ford), drivetrain, interior, and all the finishing touches that transformed the basic body into a full-fledged car, then put in the sweat equity himself.  Not surprisingly, given the fact that many major fiberglass body manufacturers operated out of the Los Angeles area, quite a bit of crossover existed between the early fiberglass and hot rodding communities.

Bill Burke and Mickey Thompson partnered up to form Atlas, which later became Allied; meanwhile most, if not all, finished fiberglass-bodied cars had some sort of hopped-up flathead Ford V-8 using popular speed parts under the hood. Also unsurprisingly, hot rodders quickly put fiberglass to use: The first documented fiberglass Model T body appeared in 1957, and Dee Wescott had already started making fiberglass body parts by that time.

Hot rodding has since developed a dysfunctional relationship with fiberglass. On the one hand, it could easily be argued that inexpensive fiberglass bodies kept hot rodding going through its darkest decades in the 1970s and 1980s. On the other hand, many hot rodders claim a real hot rod is built out of Henry-built steel, not plastic.

This dysfunction obscures the fact that hot rods and fiberglass cars both embody the notion that regular Joes with a wrench didn’t need to rely on some faraway corporate product planning committee to sell them the cars they always wanted; instead, they could build those cars themselves using readily available materials. 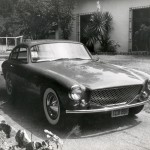 Whether working in fiberglass or metal, whether working with junkyard parts or with parts purchased from an aftermarket catalog, these do-it-yourselfers were free from the restrictions and the design philosophies inherent to production-line automobiles. They could make the car their own in a way that all the factory option lists and dealership add-ons could never touch.

I don’t imagine hot rodders will turn en masse to Woodill Wildfires and Glasspar G2s anytime soon, but I do think it’s high time hot rodders give these fiberglass bodied sportsters another look and see them for the spiritual brethren that they are.

All I could think of after I read Daniel’s piece in Hemmings was…..”Amen.”

I think it’s great that folks of Daniel Strohl’s caliber are taking the fiberglass message to heart and challenging their readership to reflect and rethink their understanding and importance of this material and its impact on their hobby.  I want to thank Daniel for embracing this message, writing this article, and for his permission on reprinting this article for our “Forgotten Fiberglass” readership.

And by the way….the person who Daniel mentioned in his April 22nd2008 blog about fiberglass – Stephen O’Brien – is part of our group (Hi Stephen!) and has become a great friend of Forgotten Fiberglass.  Rodney Packwood, Rick D’Louhy and I are still on the hunt for his G2 in the hopes of reuniting the man (Stephen O’Brien) and the car of his youth. 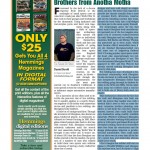 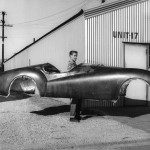 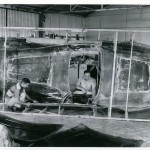 Doc Boyce Smith and Unknown Employee Setting Up Mold At Victress Factory in 1953. 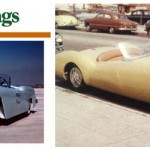