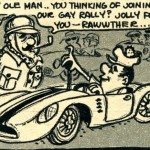 It’s Really Cool To See a Devin Rendered as a Cartoon. Back in 1959, the Devin Was Fast Becoming The Most Popular Fiberglass Sports Car You Could Build.

As you learn more about the fiberglass sports cars of the 1950’s, you’ll find that the controversy we introduced earlier concerning “Sports Cars vs Hot Rods” was a hot topic back in the 1950’s too (click here for the first story on this subject on our website).  My good friend Phil Fleming (click here for a story on his Devin that appeared at the Amelia Island Concours d’Elegance in 2010) and I have talked circles around this topic for the past several years.  Rodney Packwood, Guy Dirkin, Erich Schultz, Rollie Langston, Rick D’Louhy and others have discussed this too.

While we may never come to a final resolution on this topic, the true answer is that many of us have a hot rod that really is a sports car.  You get a “2 for 1” deal when you sign up as an enthusiast and owner of a 1950’s fiberglass sports car.  It’s simultaneously both a hot rod and a sports car – and neither as well.  As I’ve alluded to this in earlier stories, I think we have the best of both worlds (and I think many of you out there do too…)

Back in 2007, Phil Fleming sent me a letter and an attached cartoon that appeared in the October 1959 issue of Rod and Custom.  He had saved this particular issue for over 50 years because of the cartoon and an article about the “Knoop-Huffaker Devin Special” that appeared inside the magazine.  This was one magnificent Devin, and I’ll run a story about it in the near future on our website.. 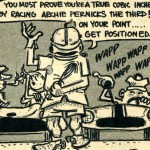 Phil’s letter focused on the topic of “Hot Rods vs Sports Cars” and it’s best to let Phil tell the story in his own words.  It’s with Phil’s permission, that I reprint the contents of that letter below.

“Geoff  Enclosed is a copy of the cartoon I have mentioned several times.  It is from the October 1959 issue of Rod & Custom, page 62.  The cartoon is important, in my opinion to share.   We talked recently about the “genealogy” of hot rods, customs/lead sleds, and sports cars/specials.  This cartoon is the only one that I have seen that links hot rods to sports cars/specials.

Moreover, it portrays some very interesting stereotypes from back in the day.  The first panel shows some “hot rodder” types from Southern California (note the Torrance and Long Beach T-shirts, tough demeanors, etc.).  Arguably, the birthplace of hot rodding.

The third panel portrays some “precious” upscale sports car owners…complete with affected English vocabulary, ascots, pipes, etc.  Clearly, they are meant to be wealthy and educated people from a different socio-economic class.   The car featured in the cartoon is almost certainly a Devin.  If I recall properly, there was a Devin advertisement in that particular issue of R&C (Note from Geoff: there was an article about a Devin-bodied sports car I mentioned earlier). 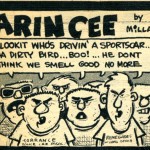 Pretty Tough Looking Bunch of California Hot Rodders in This Cartoon Panels. Know Any Of These Guys Out There Gang???

Of course, the hero of the cartoon is misunderstood as he seemingly turns his back and deserts his buddies..apparently intent on social climbing.  He is subsequently redeemed by the winning / beating the wealthy sports car owners and…this is the key to the whole pint of my letter to you….his car is actually a hot rod (note shortened ’32 radiator shell, triple carbs, etc.) with…a Devin skin!!!

Anyway, I consider this cartoon:

(2): a superb illustration as to how a Special (a Devin in this case) bridges the two cultures.Fascinating stuff….Fun too.

Great letter from Phil and his points are well taken.  The cartoon treats the topic of the sports car owner a bit “rough”, but it clearly and in an excellent manner, highlights the discussion of hot rods vs sports cars in terms of our American fiberglass specials.  We have all of this in every one of our cars gang.

I’ve posted the cartoon as a full page in the gallery below and have done close-ups of each of the panels to make it convenient to inspect the cartoon – panel by panel.  I hope this works easily for each of you.

Great thanks to Phil Fleming for taking the time to write in and share this cartoon and his thoughts on its relevance to our Forgotten Fiberglass group.  I appreciate this very much and hope that everyone out there does too. 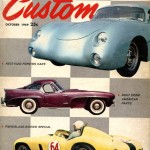 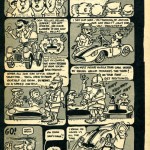 Pretty Tough Looking Bunch of California Hot Rods in This Cartoon Panels. Know Any Of These Guys Out There Gang??? 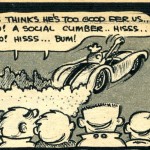 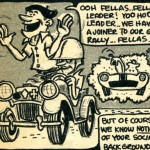 It’s Really Cool To See a Devin Rendered as a Cartoon. Back in 1959, the Devin Was Fast Becoming The Most Popular Fiberglass Sports Car You Could Build 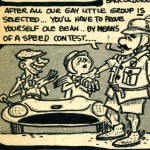 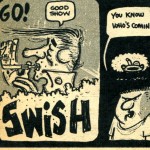 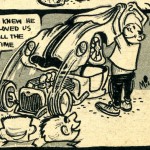 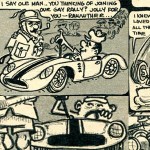