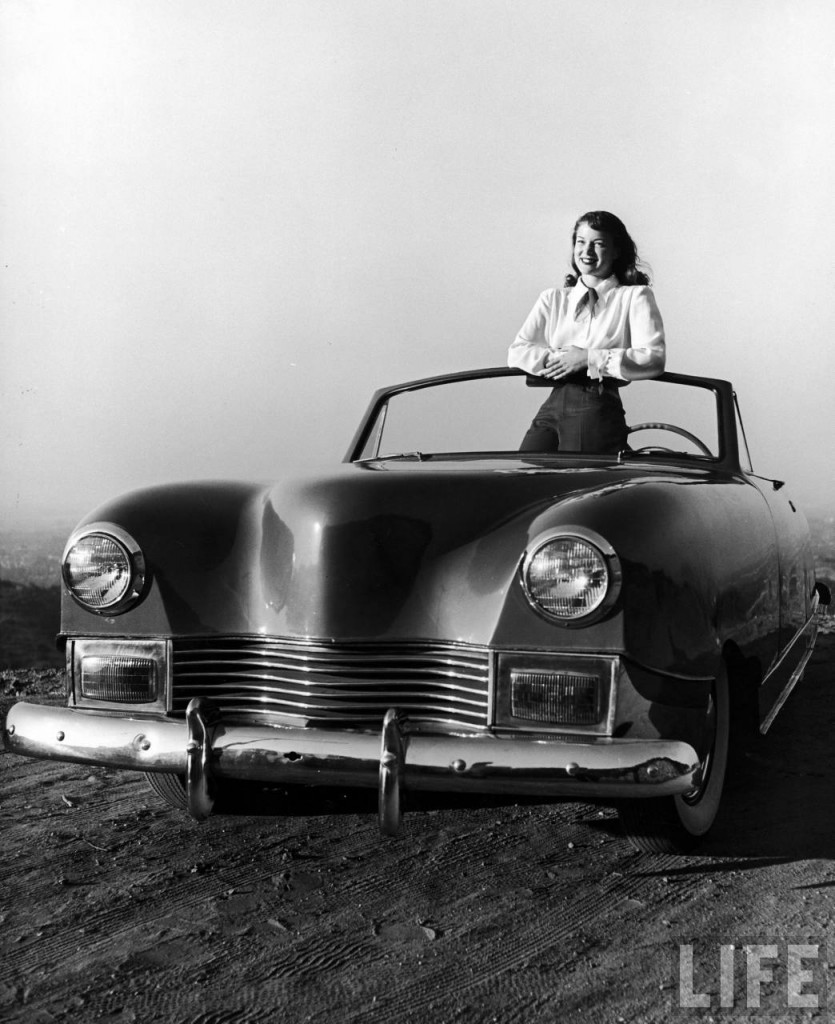 Recently, I’ve begun to realize we have a new celebrity in the world of fiberglass from the ’40s and ’50s.

I began to realize this, once I started to really dig into the research of Howard “Dutch” Darrin.  It started to add up.  Darrin was the “rock star of postwar fiberglass!”  And in a way, I knew it all the time.  Let me explain via a timeline:

Like I said, Howard “Dutch” Darrin was the “Rock Star” of the fiberglass postwar movement.  When World War II ended in late 1945, it was time for creative and industrious Americans to get to work back home – and Darrin was up to the challenge, putting forth one of the first postwar attempts at a modern car.

So…. it’s fitting we take a look at his fiberglass creation which hit the streets in the Summer of 1946.  Let’s first review the 1946 press release.

A new plastic bodied automobile, the “Darrin” was premiered here yesterday by designer Howard Darrin (behind wheel).  The 2400 pound five passenger convertible model (above), to sell for “under $2,000”, will start rolling off the assembly lines in “four or five months”, Darrin predicted.  Front fenders and hood are in one piece and the entire body is fashioned of spun glass.  The assembly plant will be in Grand Rapids, Michigan. 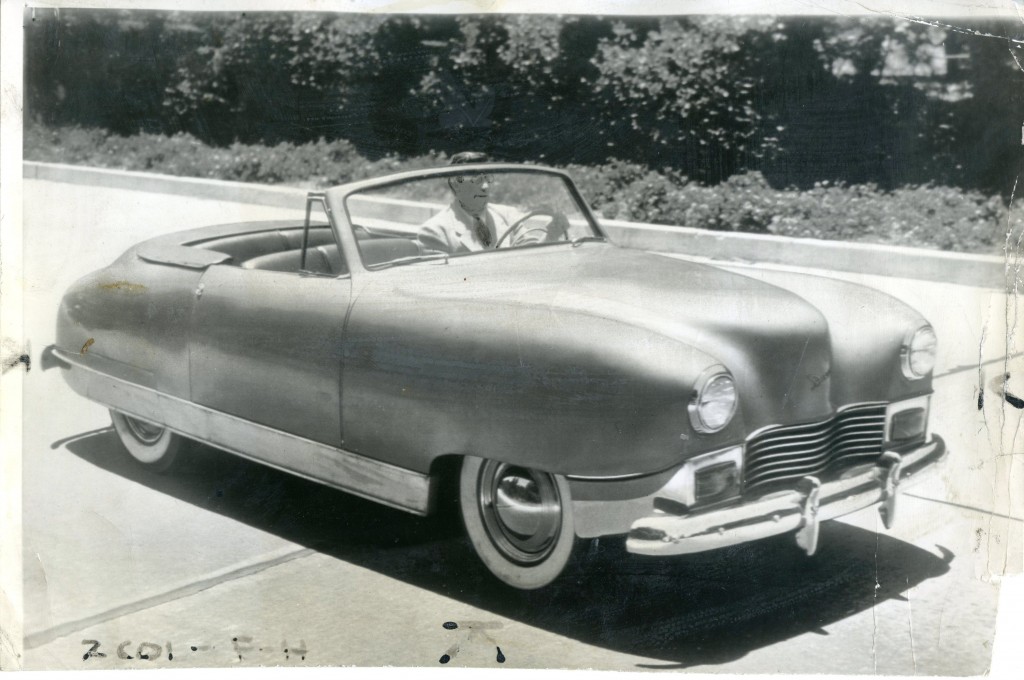 So we can confidently say that the first planned fiberglass production car in the postwar era was built by Howard “Dutch” Darrin.  We’re still researching what happened to the plans, and why the car was not produced beyond the initial prototype.  More to come about this here at Forgotten Fiberglass.

Several articles appeared in the press during 1946 about this car, and we’ll feature them over time here.  In the meantime, let’s explore the most interesting one I’ve found so far – one written by the man himself – “Howard Darrin.”

What’s interesting about this article is that it talks about the car being built from metal.  Most likely, the initial car was built out of fiberglass as a prototype.  Later production versions of the car were intended (it appears) to be constructed of steel.  These plans must have quickly changed, though, because virtually all stories about this car in 1946 talk about plans for it produced in quantity – later – in fiberglass – not steel.  This thought has added weight since this article was written by Darrin, himself.  As always, research continues.

And now…for the article. 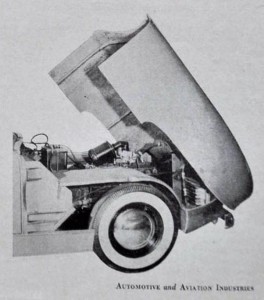 After a year and a half of extensive research and development, the Darrin is now ready.  Included in the design are such features as light metal body panels, square chassis frame construction, extensive use of hydraulic equipment, and greater driver visibility through use of a one-piece, slightly curved windshield.

Designed primarily for the automobile purchaser who likes a “specially built” car, the Darrins will be five-passenger convertibles and six-passenger coupes.  We are building a medium-priced luxury car with a high degree of roadability realized by economies of weight and design.

Our plans are to produce 500 cars during the balance of 1946.  These will be assembled at the Harrison Street Plant, leased from Hayes Manufacturing Company, Grand Rapids, Michigan, and will be priced at $1950 FOB factory.  Production for 1947 is planned at the rate of 30,000 cars per year, with assembly at Grand Rapids and Los Angeles, at a price based on this increased production.

Hayes Manufacturing Company will make a large part of the car.  National distribution is planned.  The car weighs 2400 pounds and is powered by a Continental 90 hp six-cylinder water-cooled engine located in the front of the chassis.  Top speed is over 90 mph and fuel mileage over 25 mpg.

Though appearance and construction differ from standard cars, every mechanical part is of standard make.  The power package is a separate assembly, including a frame subassembly forward of the main frame.  This front frame consists of the engine mount rails and cross members.  Its rear cross member is a 4 inch diameter tube which extends to the main frame side rails.

The front frame, suspension units, wheels, brakes, engine, clutch, transmission and radiator are built up as an assembly before installation on the main frame.  The box section side rails of the front frame serve as air ducts for ventilation.  The main frame is a square-type  construction using 6 inch by 2 inch box section side rails and tubular cross members.  Since the main frame is actually square, mass assembly and jigging are extremely simple.  The cowl, floor, door pillars and rear wheel house are a part of the frame assembly. 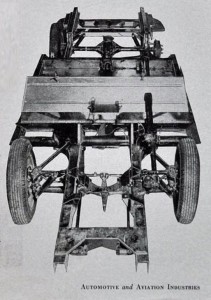 The body panels are light weight, unstressed and removable.  Stressing of the body panels is unnecessary since the torsional rigidity of the chassis minimizes to a negligible factor any distortion of the frame.  Our car weighs about 1000 lbs less than a standard car of the same horsepower, with great strength provided in the chassis parts carrying road strains.

The main frame side rails are located at the full width of the car, serving also as side bumpers or curb scuffers.  The outside of each rail is covered with a 6 and ½ inch wide stainless steel band which extends the full length of the car with the exception of the front wheel opening.

It is one of the very few polished metal surfaces on the car and gives the car a massive, strong appearance.  The use of chromium plating, has been eliminated.  Front wheels are independently sprung on steel torsion bars and the rear wheels are sprung on semi-elliptic leaf springs.  The front suspension uses forged wishbone upper arms and the lower arms are forged I-beams, which are splined at their inner ends for the torsion bars.  Steps for torsion bars are adjustable for leveling the car.  Both the upper and lower arms are on rubber bushings.  Shock absorbers are airplane-type, diagonally mounted.

The rear axle has hypoid gearing.  Drive is carried through the springs in the Hotchkiss manner.  The drive shaft is the split type, with the rear end of the primary shaft mounted on a rubber bearing.  Universal joints are needle bearing type.  Gear box is three-speed, synchromesh unit, and clutch is dry disk type, 8 and ½ inch diameter, Auburn make.  Engine mount is three-point, on rubber pads.

Approximately half the weight of the car is at the center of the axle.  Two-thirds of the weight is below the line of the top of the 27 inch diameter wheel.  The distribution of weight, together with our suspension arrangement, contributes to unusually good road holding qualities.

Body panels have been reduced in number, thereby lowering production costs.  There are four major stampings – turtle back and rear fenders, 1: doors, 2; hood and front fenders, 1.  Another feature of the body design is that the hood and front fender as one section can easily be removed, making possible greater accessibility to every part under the hood.

This entire sheet metal section is hinged at the front and is raised forward by a hydraulic lift.  The front fender forms an almost complete outside covering for the wheels.  The doors are 44 inches long and when open allow 6 inch clearance above the normal curb.  Clearance on the underside of the car, including exhaust pipe, is 8 inches.

The top of the convertible is raised forward hydraulically, using a Motor States Product hydraulic unit with electrically driven hydraulic pump.  Instead of weatherproof canvas, the top material is a soft plastic resembling leather.

Greater visibility is made possible by a slightly curved, one-piece windshield.  Extensive research methods, based on photographic studies and scientific tests in this style windshield, practically eliminate visible and disturbing distortion.  This type windshield, together with the low outline of the hood, improve road and curb visibility.  Instruments on the dashboard are installed from under the hood.  This arrangement eliminates wires, pipes, etc., from the passenger compartment.  Only five instruments are on the dash – speedometer, oil, gas and temperature gauges, and ammeter.

Padding on this instrument panel creates the effect of sunken instruments and serves as a crashpad, as well as softening the appearance of the car.  The wheel is set at a narrow angle from the vertical, making a sharply raked steering wheel.  This angle is a more comfortable one for steering.

I’m sorry to say that I’m missing the last page of the article above – page 67.  Any of you faithful readers of Forgotten Fiberglass…if you can help, please let me know.  Who knows what treasures might be in the last section of this historical article on this early postwar ‘glass car.

There are many interesting aspects discussed in this article.  First, the slightly curved windshield seems to foreshadow a much more dramatic approach in 1953 by Harley Earl and General Motors with the 1953 Cadillac Eldorado and Corvette and their use of wrap-around windshields.  And…the padded dash discussed by Darrin is 1-2 years before the same feature offered on the Tucker automobiles.  The “Darrin” seems to have been predictive of more than just a few innovations we see later in other automobiles.

Howard “Dutch” Darrin was truly an innovator on the bleeding edge of his industry and deserves in every way to be recognized as our new….”Rock Star of Postwar Fiberglass.” 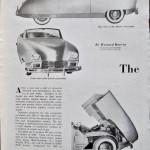 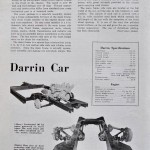 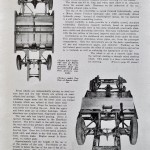 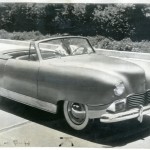 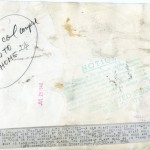 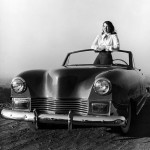 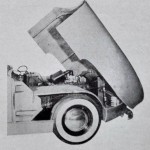 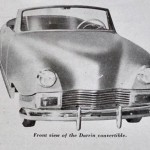 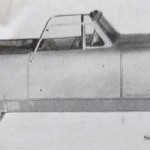 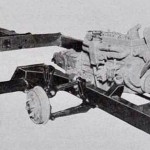 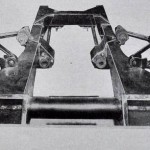 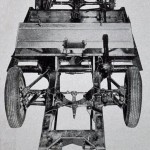 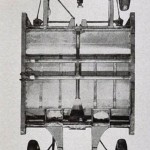 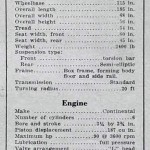 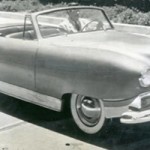