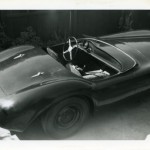 Elwood’s Caption: Ready to Install the Windshield With All The Hardware That Holds The Glass. Next, New Wheels, Tires and Hubcaps. Then, To The Upholsterer For Seats, Floor Mats and Tonneau Cover.

This is quite a story gang – it started nearly 60 years ago with Elwood Cauffman’s dream, it was re-engaged when Elwood contacted fiberglass historian Harold Pace in 1996 and 1997, it extended a bit more when I had a chance to visit Elwood at his home in Dunedin, Florida in June 2007 when he was nearly 90 years old, and it extended even more in the last year with additional discovery of information about his car.

Back in the mid 1990’s, Harold Pace was beginning to hit his mark concerning the writing and promoting of fiberglass kit cars across America.  By 1996 he was writing a column called “Kit Carchives” for Petersen’s Kit Car Magazine and was becoming well-known for his historical research into these cars as well as his promotion of and writing about new fiberglass kit cars and the advantages they held for all.  If you wanted to know or share something about kit cars in America, Harold was (and still is) your man.

Elwood Cauffman was an avid subscriber to Kit Car Magazine and saw Harold’s interest in the history of these special cars.  By 1996, he put together a letter describing what he had accomplished back in the 1950’s in the building of his own special car.  As you read Elwood’s letter below, you’ll find it interesting that he couldn’t recall the name of the car body he had used.  I’ll tell you why that may be the case in a future story about an interview I did with Noel Bangert back in 2008-2009.

Bangert Manta Ray sports cars are not easy to find, and to have someone tell this story in “first person” is amazing given the amount of time that has passed from then ‘til now.  Harold has shared his original communication from Elwood and today’s story is the first of two letters he received from him about the building and driving of his sports car.

So.. let’s dig our teeth into some vintage glass and get to it. 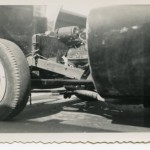 Here You Can See The Elwood’s Hand-Built Frame As Well As The Flathead Firmly In Place And Rip Ready To Roar!

I built a fiberglass sports car back in 1954 and finished it February 1956.  The car was built in my garage while I lived in my home in Whittier, California.  I worked at Rheem Manufacturing Company (Aircraft Division) in Downey about a block from Firestone Blvd and where Lakewood Blvd and Rosemead Blvd change name.

Some of the guys in the plant were interested in the new fiberglass bodies that were being introduced after the Corvette made its debut in 1953.  One body was Glasspar and another was the Willys Agency on Firestone about a block from Lakewood Blvd and they put their Willys 4 cylinder or 6 cylinder in the “Woodill” body and they produced quite a few cars.

You can see for yourself if you rent VCRs of the movie “Johnny Dark” 1954 with Tony Curtis, Piper Laurie, and Don Taylor.  Second movie is “Knock on Wood” 1954 with Danny Kaye (made in England movie) with Mai Zetterling and the third movie is “Written on the Wind” with Dorothy Malone, Rock Hudson, and Robert Stack.

Dorothy Malone drives a Woodill car and Robert Stack drives an Allard J2-X, you’ll get a kick out of these movies.  The Johnny Dark movie is a race from the Canadian Border to Mexico – lots of good action shots of different cars.

The fiberglass body I selected was made in Studio City on the Hollywood Freeway out past the Hollywood Bowl.  I never saw a car body like mine on the highway – don’t know if it had a name or not.  I paid $500 for the body and they delivered it in two pieces, the rear portion to the firewall and the hood which included the two front fenders. 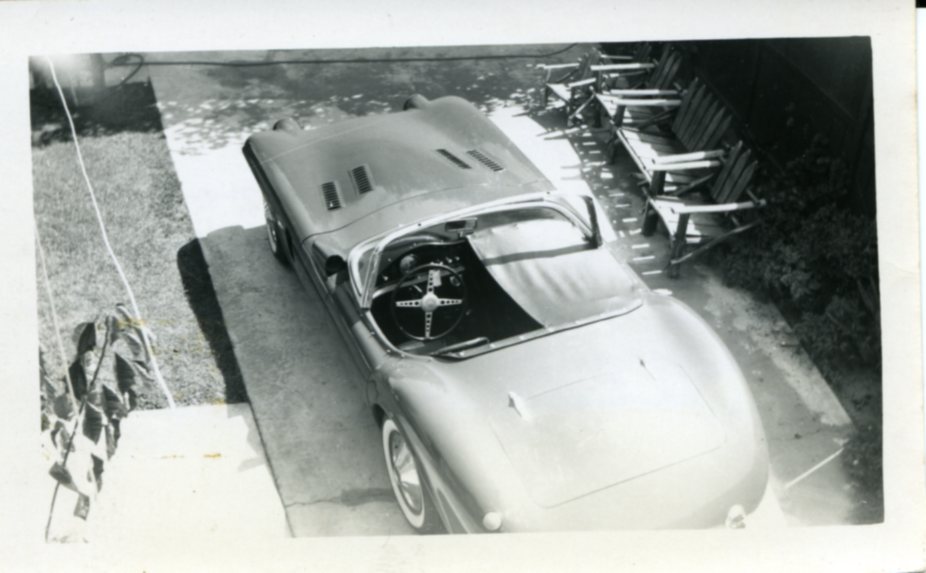 Elwood’s Caption: Whittier, California – 1956. Seats All Upholstered, Tonneau Cover All In And Car Is On The Streets. I Added The Outside Rear View Mirror In A Large Fiberglass Cone – See In Other Photos.

This was no kit car!  From here on you were on your own.

Doors must be cut in, trunk lid cut in, install the floorboards, firewall to be installed and windshield installed.  The fender design was taken from the 1951 (sic) Buick Dream Car.  I bought a 1941 Mercury Sedan as the donor car – towed it home and dismantled it.  I got the design print of the new car’s frame for a 100” wheelbase frame to be made of mild steel rectangle 2” x 3” with a 1/8” wall and flash welded together.

I cut the frame pieces out and burred them and took it to my friend Ben Newport to weld it.  He said, “Did you cut this out?”

“Yes.  Cut mine out and I’ll weld yours for nothing  Get Busy!” 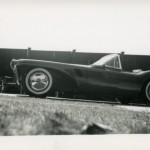 I Like The Angle of This Picture – Cauffman’s Bangert Manta Ray Looks Like It’s Ready To Be Launched – Full Speed Away!!!

I bought a rebuilt block and I also bought (used) 2 Edelbrock flat heads with a stripped spark plug hole – I fixed that easily and also got a used dual manifold for 97 carbs; a full race camshaft.  I built and welded up the whole exhaust system and it worked good and sounded good with two straight thru mufflers.

Made a drag link for quick steering (1 and ½ turns lock to lock) and it worked dandy.  Another item I fabbed was the fly-off hand brake.  As you can see by the photos, the steering wheel was hand made and the center piece to replace the horn was made in the shop by me.

The brake and clutch pedals were the pendant type just being introduced in some of the new cars rather than the swing type from a shaft on the bell housing.  Put in new king pins and rebuilt the brakes.  The main leaves of the front and rear springs were flattened a little by heating (red) each spring eye and rolling it up just a lil’ bit.  I made a tool to do this on the spring eyes – came out nice and I left out a couple of leaves because the car was so much lighter than the donor car.

Bought a new radiator – wider and lower to conform to the body design.  Bought a 12 volt ignition coil from Moon (speed shop close to me) and he reworked the coil to 8 cylinders and you had the extra power in the coil for better performance (he said). 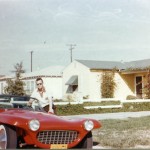 So Far, This Is The Only Color Photo We Have Of Elwood Cauffman And His Bangert Manta Ray – Taken in 1956. The 14 Coats of Lacquer Are Brilliant – What A Car This Must Have Been!

I had the car upholstered and a tonneau cover made in Buena Park.  The car had 14 coats of red lacquer and I painted and sanded it myself.  I built in a rear view mirror on the outside of the car (check the photos).

Hope this is enough information to write an article.  Drop me a line if you need more information – I’ve been retired about 16 years now.  Love it here in the Tampa Bay area (25thyear now) and right on the shore of Gulf of Mexico – 75 degrees at noon today.  I’m pushing 79 years in a few months.  Keep all the stuff  I’ve sent.

Thanks again to Harold Pace for making this story possible and sharing the material above.

When Harold shared Elwood’s letter with me in 2007 I was ecstatic!  Dunedin Florida is where I grew up from age 17 on – and I still live close by.  I tracked down Elwood and had a great talk with him about his memories and his car – more about that in a future story here on Forgotten Fiberglass.

By the way, the “Ben Newport” he’s referring to is none other than the “Bert Newport” who built the Wildfire I wrote about earlier this year.  Click here to review the story on the 1954 Bert Newport Wildfire Special.

I look forward to sharing more of the story of Elwood Cauffman and his Bangert Manta Ray Sports Car in the near future. 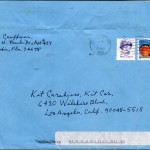 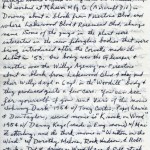 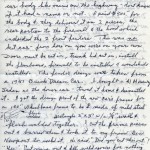 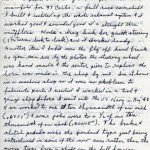 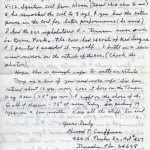 Elwood’s Caption: Ready to Install the Windshield With All The Hardware That Holds The Glass. Next, New Wheels, Tires and Hubcaps. Then, To The Upholsterer For Seats, Floor Mats and Tonneau Cover.

Here You Can See The Elwood’s Hand-Built Frame As Well As The Flathead Firmly In Place And Rip Ready To Roar! 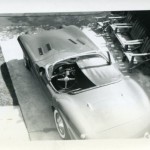 Elwood’s Caption: Whittier, California – 1956. Seats All Upholstered, Tonneau Cover All In And Car Is On The Streets. I Added The Outside Rear View Mirror In A Large Fiberglass Cone – See In Other Photos.

I Like The Angle of This Picture – Cauffman’s Bangert Manta Ray Looks Like It’s Ready To Be Launched – Full Speed Away!!!

So Far, This Is The Only Color Photo We Have Of Elwood Cauffman And His Bangert Manta Ray – Taken in 1956. The 14 Coats of Lacquer Are Brilliant – What A Car This Must Have Been! 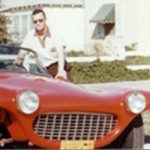