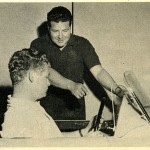 Here Vale Wright Stands Outside His Car And Points Out Controls And Instructions To Dick van Osten.

Vale Wright was inspired by the 1947 Cisitalia 202 SMM Spider Nuvolari and chose to create a fiberglass version of this car – as close as possible to the original design.  And I think he did a darn good job.  Click here to learn more about the design heritage of this car.

As Rick D’Louhy and I ferret out all of the vintage fiberglass articles we can find, we find more and more about this cute little sports car.  Interestingly, today’s article refers to this car as the “Vale Sports” – not the “Vale Sports Car.”  I thought this was an error at first, but if it was – it was continually repeated throughout the article.  Another interesting point is the article never talks about the design heritage of the famous Cisitalia.

This is one of the most detailed articles identified on the Vale Sports Car to date, so rather than talk about it let’s let author Dick van Osten tell it in his own words. 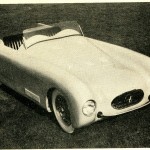 The “Vale Sports” Was a Handsome Car – No Doubt Due To Its Cisitalia Nuvolari Heritage.

Within the past six months, the word “Fiberglas” has become a magic word to the ears of many sports car enthusiasts.  It brings a farwaway look into their eyes as they dream of what they would build with this “miracle” material.  I have seen many of my friends drop off into a state of resin-induced hypnosis with little or no provocation.  In spite of their total fascination and near-hysterical sales talk, I have tried to remain silent and objectively waited to see what this alleged answer to all the sports car builders’ problems would actually do.

It’s interesting to note that the various manufacturers of glass products, resin for bonding, and the many types of “curing” catalysts have not rhapsodized over this new wonder material, but sit back busily making their normal products.  I’m sure their curiosity must have been aroused by the thousands of inquiries received asking the same question:

“How do I build a sports car body?”

Also, their public relations divisions must have spent hundreds of dollars in postage trying to answer all the questions.

Like many others, I’ve been quite skeptical about just what could be, and what couldn’t be done with Fiberglas.  But after seeing some of the products turned out by professional and amateur constructors, I’m inclined to agree with many of them that the material is a new and interesting medium, perfect for the one-off body and limited commercial production.

I think my conversion occurred when architect-designer Vale Wright of Berkeley, California asked me if I wanted to drive his new Fiberglas-bodied “Vale Sports” to the Madera Road Race, and on down to Los Angeles for the Third Annual Motorama.  This would be about a 400 mile open highway drive, a good distance in which to garner some impressions of what one of these bodies offered. 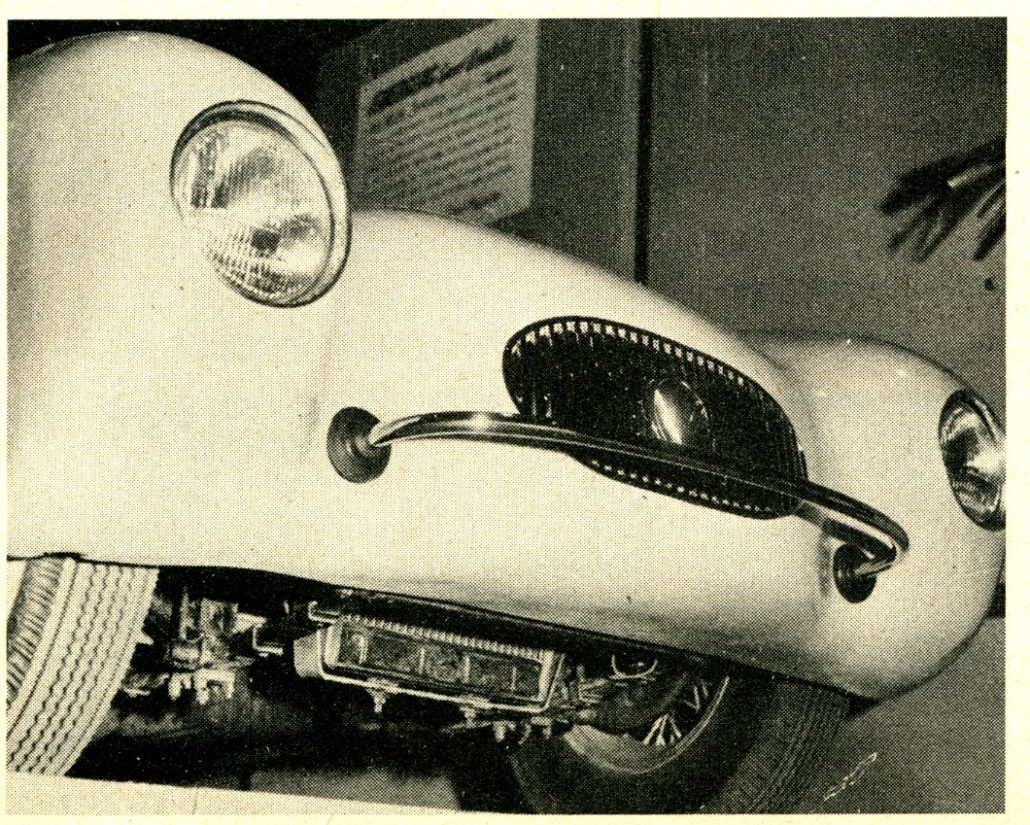 What Great Lines This Car Had – Picture Taken at Either The Petersen Motorama or Oakland Roadster Show in 1952.

I honestly expected to enjoy the sensation of riding inside the bass drum of a Scotch bagpipe band, but I quickly changed my mind!

Wright, like so many other builders had to work with the materials at hand, in this case, a TC-type MG.  This is not the ultimate in chassis design, but it is sturdy and easy to work with.  Naturally, the right-hand drive setup was retained, which adds to the European styling of the car.  This also adds one of most fascinating features of “the prototype,” as Wright calls it.

The moment I sat behind the wheel, looking down the not-too-much louvered hood dropping off between the front fenders, I had the peculiar feeling that usually comes only when you sit in an expensive, high-performance, delicately tuned sports car.  This was, of course, only mental, but so strong that during the following night, while boiling down the southern edge of California’s twisty Ridge Route with the Headlights slanting out into the dark and the little TC blasting happily at an illegally muffled 4500 rpm, I leaned over to ask Vale: 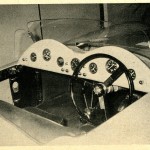 “How much time do we have at the Rome check?”

Perhaps my imagination ran away with me, but that’s just the impression the hood line gives from inside the car.  Looking back at night is an even more startling feeling.  The rear fenders are very high and deep with the taillights (courtesy of Revlon) set down on the steep-sloped rear deck.  A quick glance aft leaves you searching the skies for stray meteors that might cross your flight path.  The taillights reflect in the high (and controversial) fender fins, making the car look like a full-bore space ship.  This is somewhat disconcerting as a corner-of-the-eye glimpse will also have you reaching for a fire extinguisher.

But what happened to the bass drum effect I expected?

It just didn’t exist.  I knew that the car had been molded in one piece and the body openings cut out later. It was assumed that the body would act like a huge echo chamber, amplifying all engine and road noises, particularly as no undercoating had been applied.

Apparently the soundproofing properties of Fiberglas exist even when the material has been made rock-hard with plastic bonder.  I am not sure this is absolutely true: neither is Wright, but there’s no reason to reject this fact, as far as this particular car is concerned.  There was no drumming, no rattles, and, what was even more amazing, you couldn’t hear the TC valves! 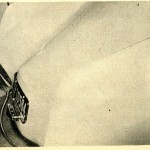 It’s Interesting That Dick van Osten Noted The Tailfins Were Controversial. This Is Even More Intriguing Given The Cisitalia Design Heritage of the Car.

The chassis and engine are strictly stock with the exception of the special cadmium-plated 16 inch wheels.  With these wheels, the car rides a little better than with the standard 19 inch, but is slightly lower-geared.  Handling characteristics are typical TC but the reduced weight (1350 lbs) has made the already jumpy front end a little “spooky” at high speeds.  I feel that I would be willing to sacrifice some comfort for a more solidly shocked front suspension and Wright tells me this is included in future plans.

Preliminary plans for the car were completed in March 1952 with actual construction started in late April.  The female mold method was decided upon and the plaster master was built.  From this, a Fiberglas female mold was made and work started on the first body.  Wright discovered several things at this stage that somewhat delayed progress.

It seems that anybody with any experience in working Fiberglas has a hundred little secrets he intends to keep just that, and the amount of helpful information is practically nil.   So, from this point on, a lot of the work became a matter of trial and error.  Fortunately there were not too many errors and the car was scheduled to be shown at Oakland’s International Sports car Show in October.

The body was quite smooth when removed from the mold, but the usual air bubbles had to be eliminated – a slow and tedious process.  After this came the problem of installing the unit on the car, cutting out the hood, fender, headlight, and grille openings.

The only two major chassis modifications consisted of lowering the radiator and removing the TC fuel tank and spare.  The body was insulated with rubber blocks at all attach points to minimize shock and noise.  Nearly everything else was left just as the MG factory had built it, but a new fuel tank (10 gallon) was installed under the rear deck along with the spare tire. 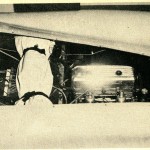 Here The MG Drivetrain Heritage Of The Vale Sports Can Easily Be Seen.

The original MG seats were cut down one inch in thickness for a more comfortable sitting position and re-upholstered in blue and black plastic.  All new Stewart-Warner instruments were installed in the double-cowled dash.

At the Oakland Show, the car was an immediate sensation, although the builder was far from satisfied with details.   At Motorama, the Vale Sports has made another immediate hit, although the fender fins remain a very strong controversial point.  Wright insists that the car looks bad without them from a “form-flow” point of view and, after seeing a reworked photo in which they were eliminated, I’m inclined to agree with him.  With the sharply dropping-off hood and rear deck, the car, without the straight fins, resembles a large blue pyramid.

When I asked Wright if he had any advice for others who would like to try building a Fiberglas body, he said that there were so many points to consider that there wouldn’t be room in this article.  However, he did emphasize two well-taken principles:   One: take your time and don’t change the design after it’s started, and two, don’t underestimate the amount of work involved.

Wright doesn’t know if he will build any more bodies for the general public or not, although he has been deluged with requests.  There will be two or three more built by some of the fellows who helped him during the construction, but beyond that, who knows?  He estimated that it could be sold for about $700 and might be adapted to fit any chassis from 94 to 100 inch wheelbase and up to 60 inch tread.

Well, I’m sold on Fiberglas.  It didn’t show any of the bad qualities I had heard about before the trip, and current products from other builders are living up to the reputation of the materials.  It isn’t the easiest medium in the world with which to work, but the Vale Sports proves that with patience, planning, and perseverance, the amateur can build his own dream car.

Who knows?  Maybe a certain 750 cc competition car will have to be redesigned for Fiberglas!

Dick van Osten was certainly sold on fiberglass – and this was fairly early on – January 1953.  To have a strong advocate of the material and the cars so early in the 1950’s is impressive in every way.

Also, as author van Osten suggested at the end of his article, Wright would go on to build some race cars too.  Not only was his “prototype” raced on the West Coast, but Wright built two small race cars based on the same body – with modifications.  More about those cars in a future story on Forgotten Fiberglass.   Another car you might remember was based on the Vale Sports mold and this was Jules Heumann’s Singer Special.  Click here to read this story of how that car was built.

To date, none of the Vale sports car bodies or their modified cousins noted above have been found.  Rick D’Louhy and I, along with Mike Wittman and Erich Schultz, are all hoping that a “stash” of them will be found someday – squirreled away by someone who recognized the brilliance and style of the Vale Sports Car – designed and built by Vale Wright.

We can always hope…. 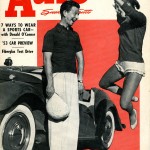 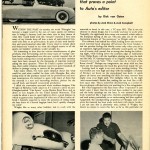 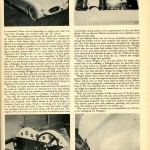 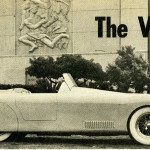 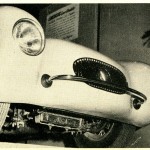 What Great Lines This Car Had – Picture Taken at Either The Petersen Motorama or Oakland Roadster Show in 1952.

Here Vale Wright Stands Outside His Car And Points Out Controls And Instructions To Dick van Osten.

The “Vale Sports” Was a Handsome Car – No Doubt Due To It’s Cisitalia Nuvolari Heritage.

Here The MG Drivetrain Heritage Of The Vale Sports Can Easily Be Seen.

It’s Interesting That Dick van Osten Noted The Tailfins Were Controversial. This Is Even More Intriguing Given The Cisitalia Design Heritage of the Car. 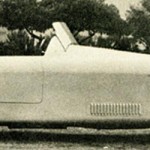