I’ve made the point above – the quote from Jim Potter – many times in writing, speaking, and talking with others on the phone about building any of the specials in the 1950s.

There was no such thing as a “kit” in building any of the cars from the 50s.  Rather, if you chose this path of choosing (or building) your own sports car body and ultimately a finished car, you became a car builder, designer, and “stunt pilot” in that you got to test what you built and savor – or suffer – the consequences.

Jim Potter understood this better than anyone in the era, and wrote about these special handcrafted cars in detail, depth, and across years more than any other.  For these reasons and more, I consider Jim Potter

The “Rock Star Author” of fiber-specials from the 1950s.

Potter had a vantage point like none other in 1961 when writing about specials – he wrote the first most complete survey of the fiberglass sports car industry that was growing across America in the December, 1952 issue of Motor Trend.  Yes – that’s right – 1952 – and we’ll share that story here soon at Forgotten Fiberglass.  Today’s story is nearly 10 years later.

Think about it.  Potter knew these cars better than anyone.  Not only did he write about them in greater detail and frequency than other photojournalists – he continued doing so into the 1960s when today’s story – a “survey of the industry” – appeared under the title “Restyling From the Ground Up” in this 1961 Trend Book titled “Restyle Your Car.”

This Trend book by Jim Potter was one of the last – if not the last – major survey of these cars from the 50s.  And…it included some of the cars that would move forward in the 60s such as the LaDawri.  Allow me to list the cars that he reviewed to pique your interest:

Let’s review his two page article introducing these cars in this book. Then, we’ll share the 20+ pages of car photos that follow in the article – eye candy for all to enjoy 🙂

By Jim Potter
Chapter: Restyling From The Ground Up

Toughest of all restyling methods is the procedure of eliminating the original body completely and literally rebuilding a car “from the ground up.”  It isn’t recommended for the novice, or even for the experienced, unless he wants to get into a multitude of problems that can be exasperating, sometimes defeating, and always time consuming.

Yes, there are those who will go in for this type of car building because they may want something completely different, or they may have the idea in the back of their minds that with their particular styling concept, they will be able to market the car throughout the United States on a limited production quantity basis. 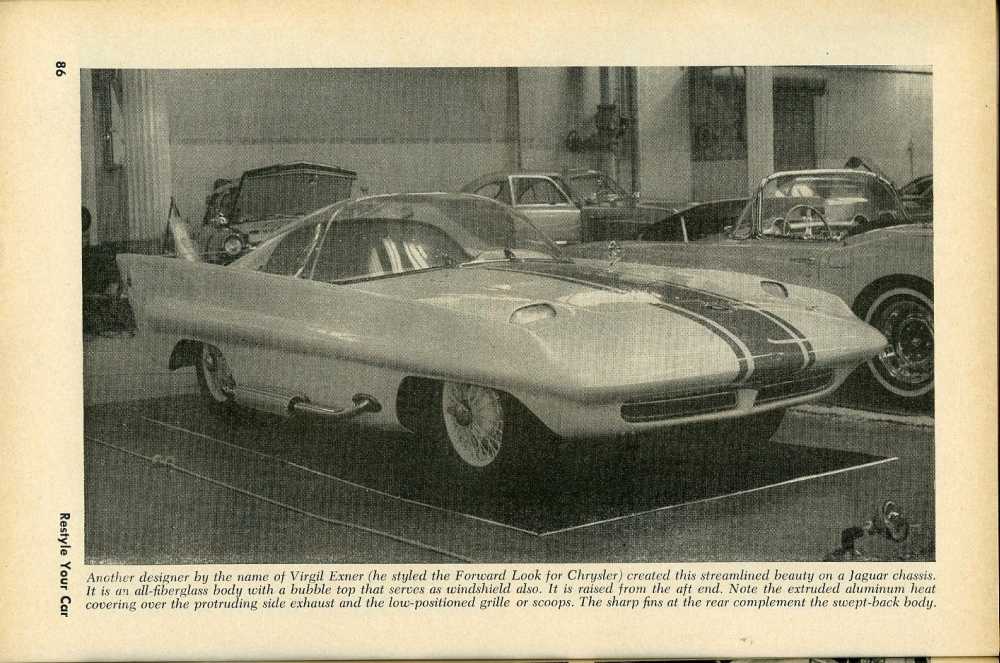 Fiberglass has led many an experimenter on this road because it reportedly is a material that any backyard enthusiast can handle at low cost.  The may or may not be so, but in any event, before we get off onto a tangent of discussing the merits or demerits of building a car from the ground up, using fiberglass or aluminum or any other material, let’s examine what has been done in this field over the past several years.

Howard “Dutch” Darrin, builder of the Kaiser-Darrin and an automotive designer of considerable reputation in the Thirties, stripped down a DKW two-door model to the bare chassis and came up with a fiberglass-bodied car that was sleek and trim, an excellently styled four-seater that is illustrated on the cover of this book and in black and white on the following pages.

Darrin’s “new suit of clothes” consisted of eight large fiberglass reinforced plastic panels, designed in such a way that no major modifications were required on the basic 92 inch wheelbase DKW chassis.  Actually, the inner body shell of the DKW remained pretty much intact, and in the development of the styling clay mockup was shaped and sculptured directly onto this inner shell.

Does anyone recognize Ed and Phil Cox working on their Wildfire? This was another story recently covered here at Forgotten Fiberglass.

To be certain of the design, however, Darrin went to the trouble of making a ¼ scale clay model.  From this point, molds were taken off the larger clay mock-up and the fiberglass “skin” sections were formed.  It is interesting to note that the original grille from the DKW was used in the newly styled body, turned upside down to fit the molded in type cavity.  The use of fiberglass enabled the builder to make sculptured contours in the rear end area that would have been difficult to do if metal had been used.

The resulting sport-type DKW Darrin car was 10 inches longer than the original two-door sedan.  With was the same 67 inches, but the height at the top of the windshield was lower by 5 and ½ inches, down to 52 inches.  This latter change was accomplished by moving the windshield back six inches and down four inches, giving it a slightly greater rake to improve and streamline the appearance. 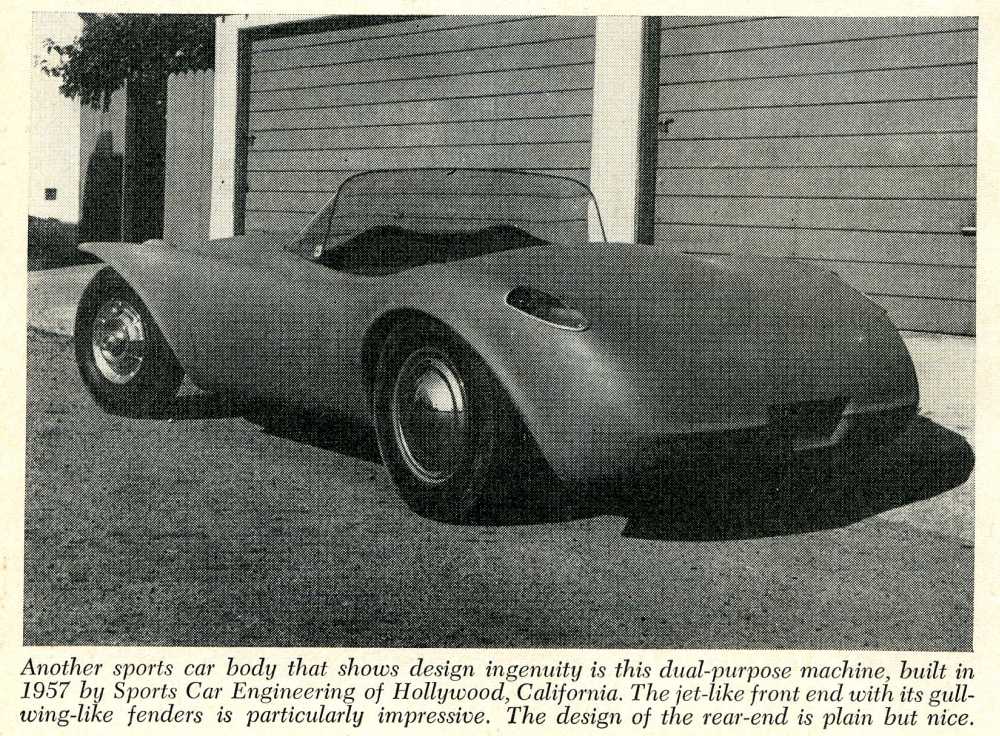 Another pioneer in this field of utilizing existing chassis for newly styled sports car bodies was B. R. Woodill, who came up with a two-passenger fiberglass body known as the Wildfire.  The Woodill firm developed a one-piece body, however, instead of the many fiberglass sections that Darrin used.

Originally, a Ford chassis, cut down by several inches from the production concept, was used for this new body, but many builders of these cars made adaptations of their own, some coming up with completely original frame and suspension layout.

Woodill built several hundred of these kits and sold them throughout the country to backyard automotive builders who searched the junkyards and other sources for suitable basic chassis components.

Another sports car with interesting styling is the “Conquest,” designed and built by Les Dawes of Long Beach, California.  He also has used fiberglass.  The sleek two-seater has an overall length of 175 inches, an overall width of 71 inches, and height of 49 inches.  The body is adaptable to Ford, Plymouth, Dodge, Mercury, Willys, and Henry J chassis, but a special 2 x 4 steel tube frame is available.  A unique feature of the Conquest is the windshield bow and roll-bar combination.

There are builders of customs who will tackle the job of completely redesigning and reshaping the metal body into something that’s sleep and acceptable.  Many such are illustrated in the following pages.  Sometimes, old wrecks are utilized for this purpose, so a tour of junkyards in your hometown may be the source of salvageable automotive components that lend themselves to “rehabilitation.”

But, let us warn you, this road is not easy.  It’ll take plenty of work, time, and real mechanical know-how and ingenuity, to come up with something that you’ll be proud to show at he local custom car show.  The challenge, however, may be what you’re looking for.

Reviewing The Pages of the Article:

Let’s take a look at all of the pages of this article: 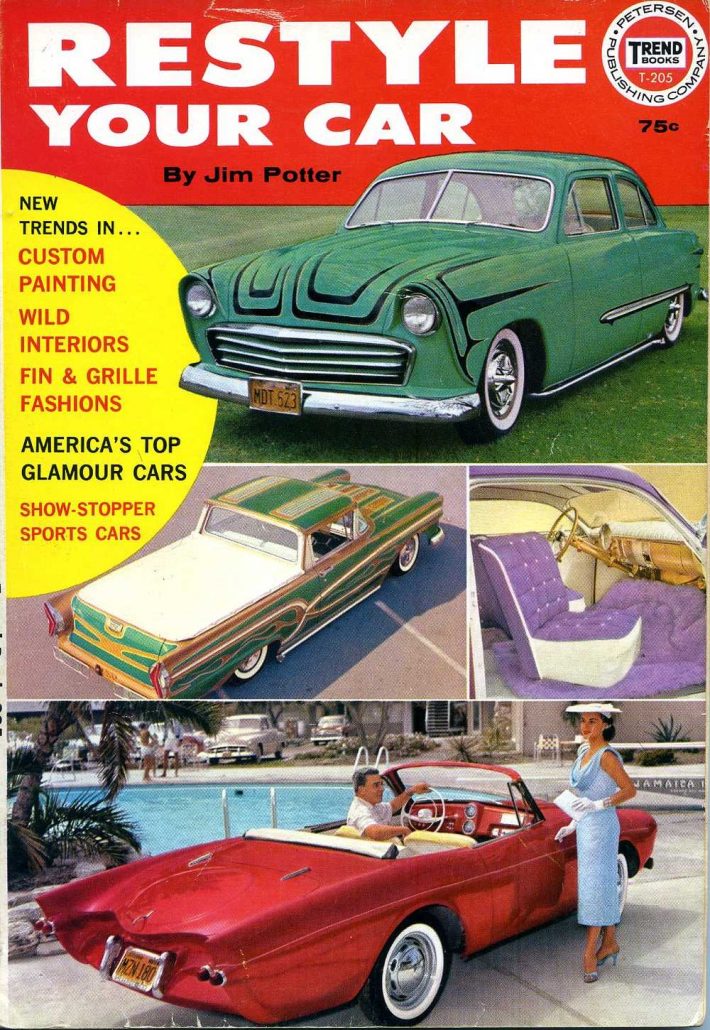 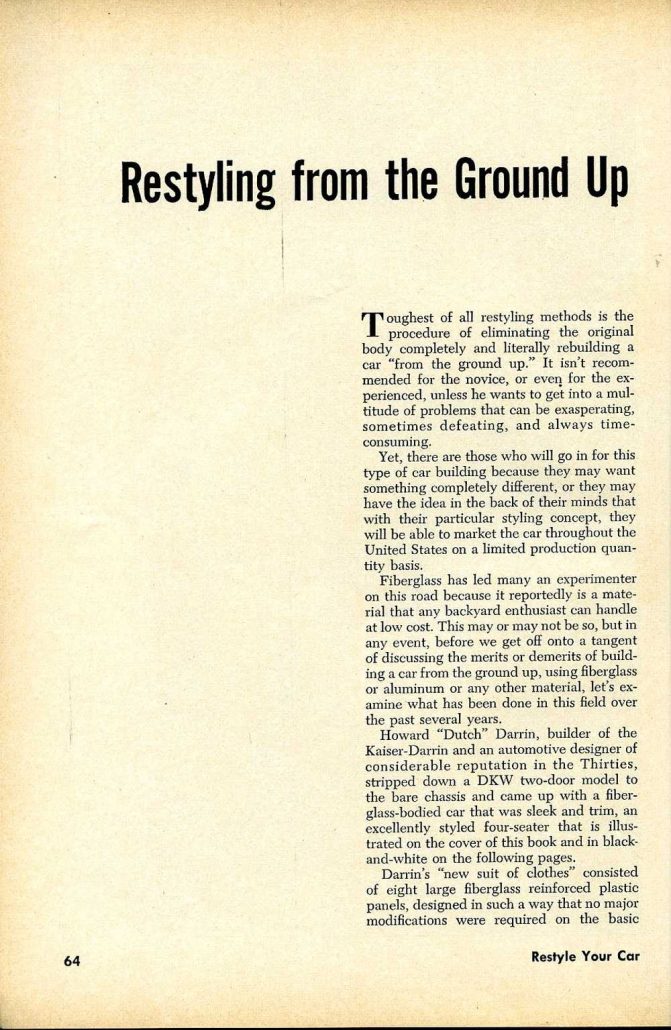 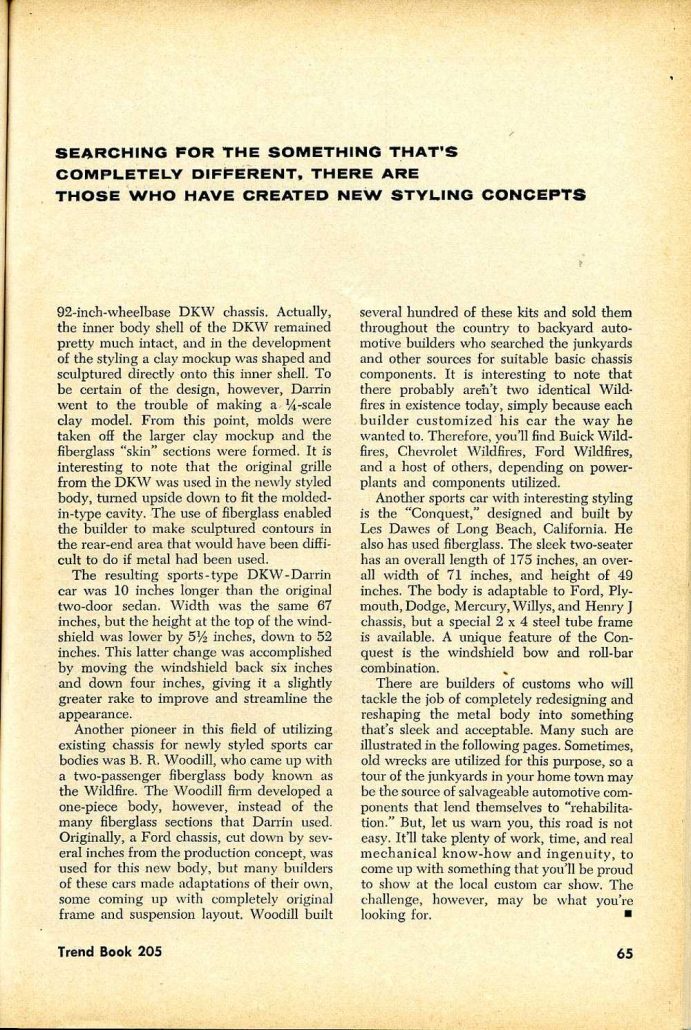 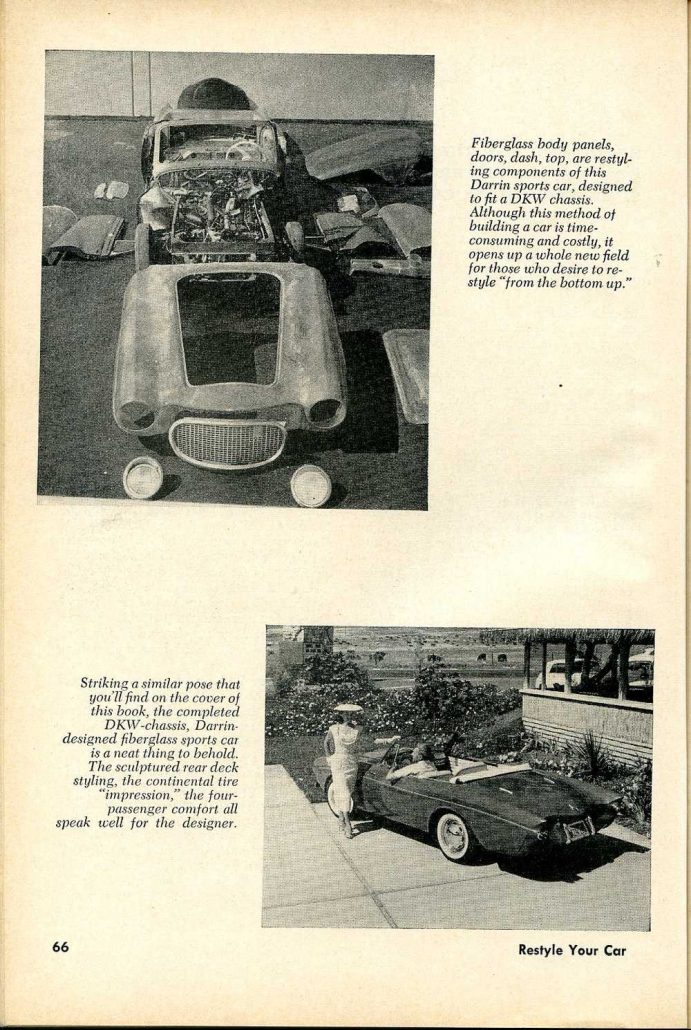 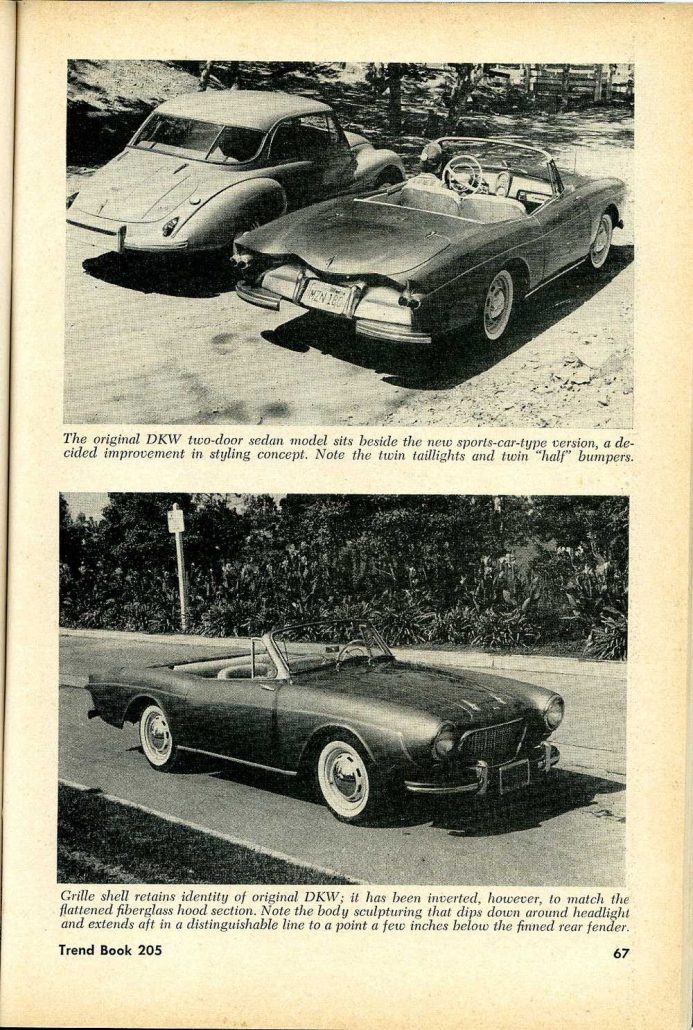 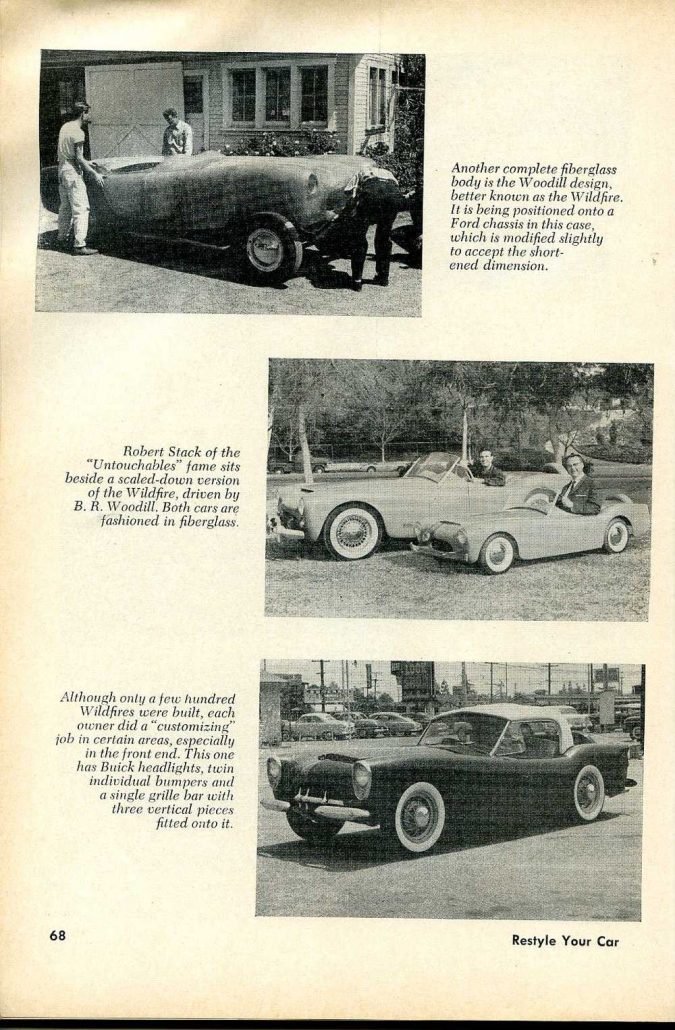 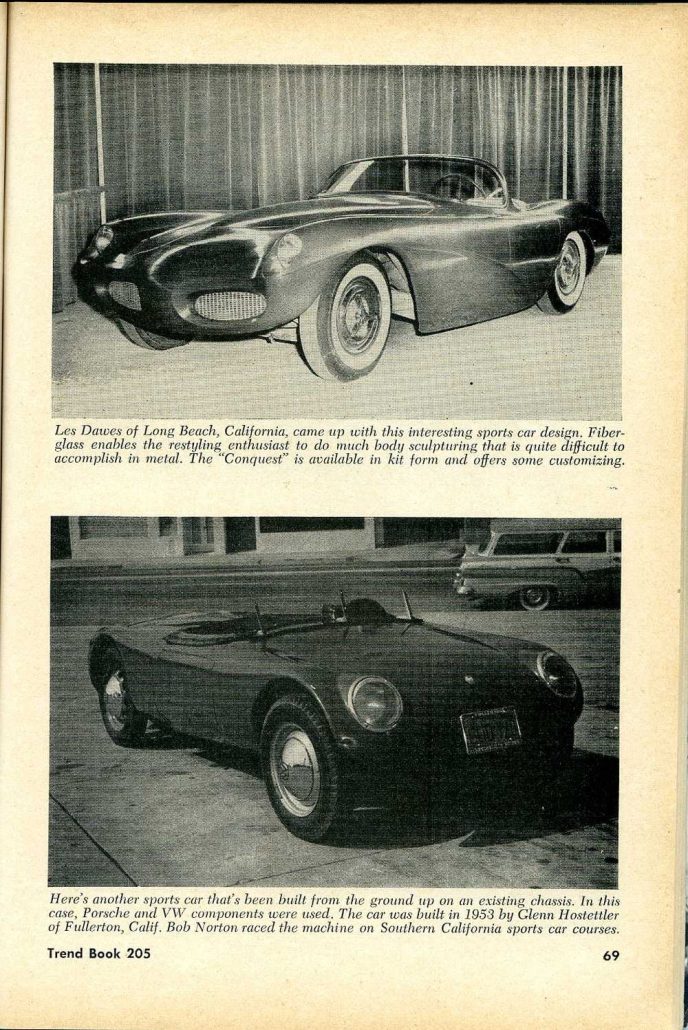 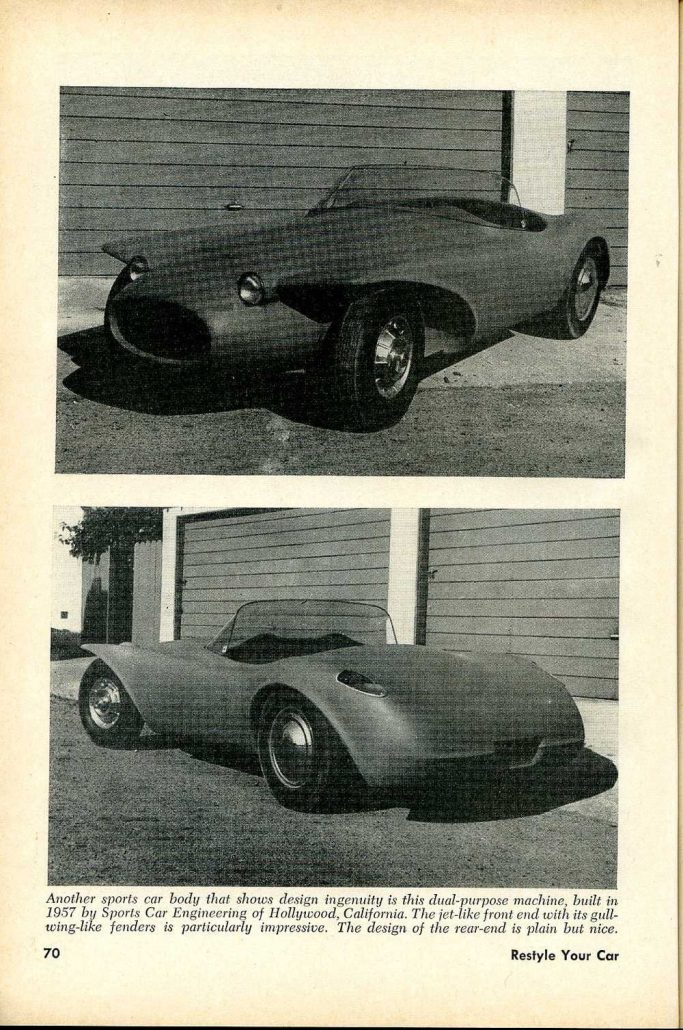 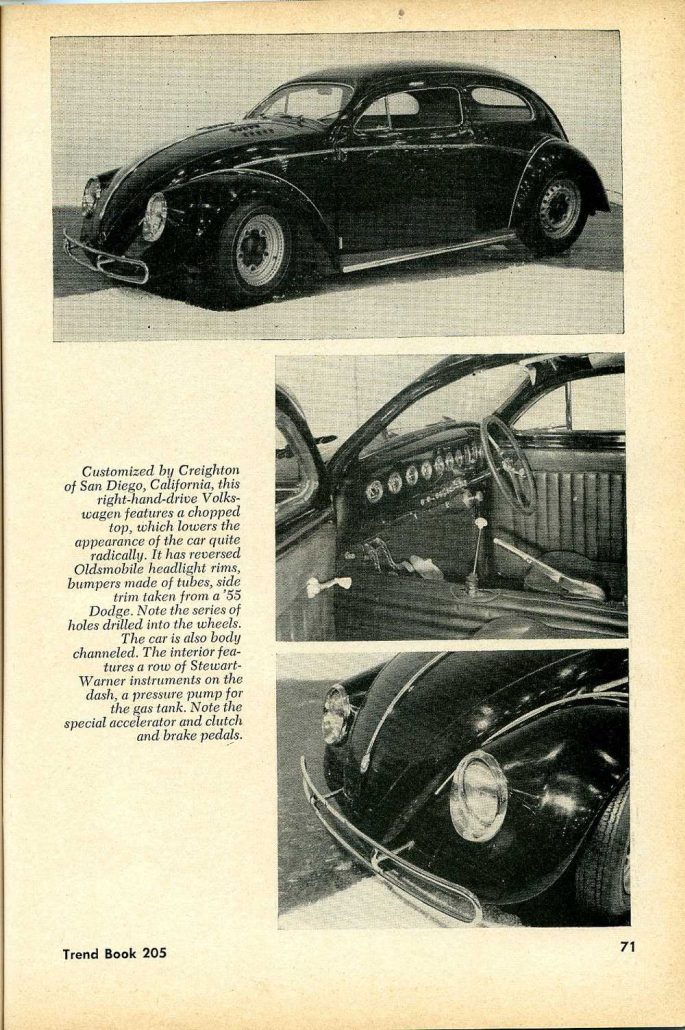 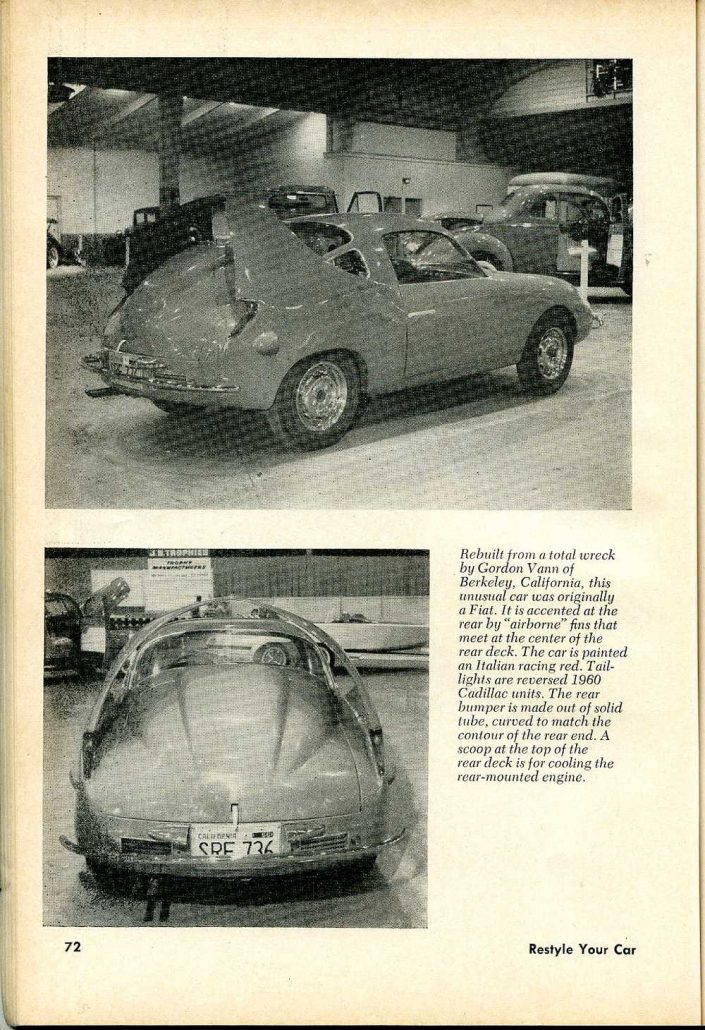 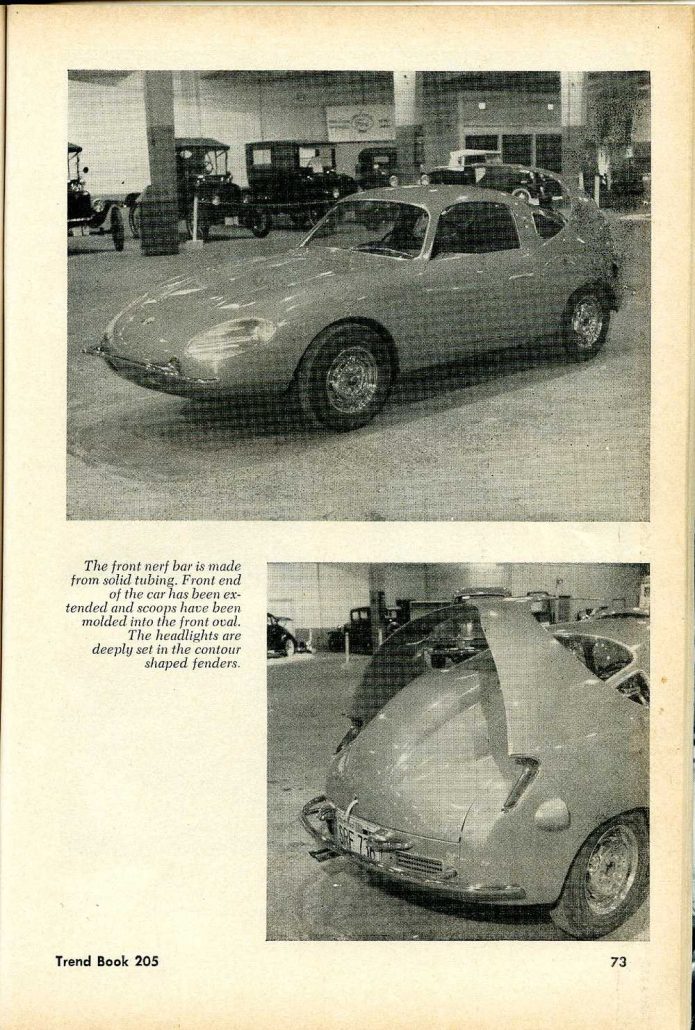 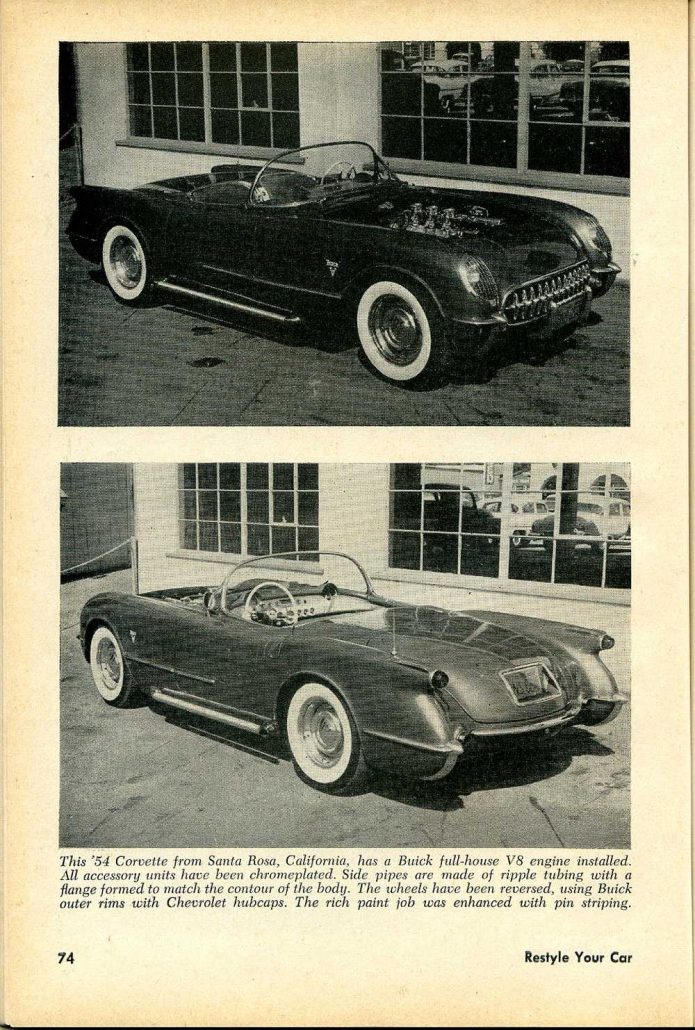 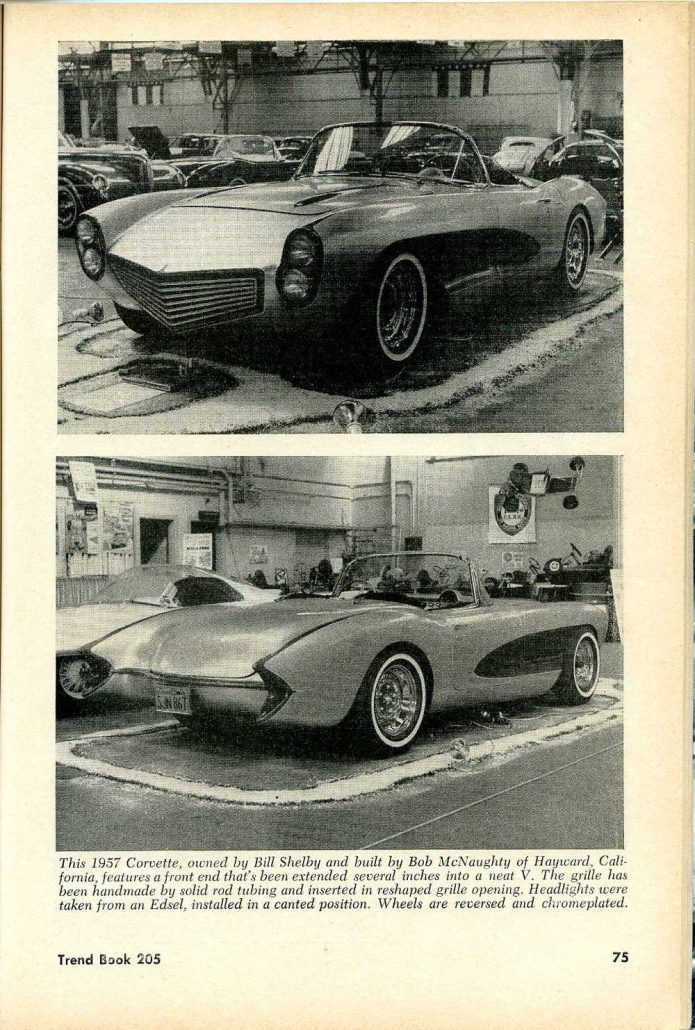 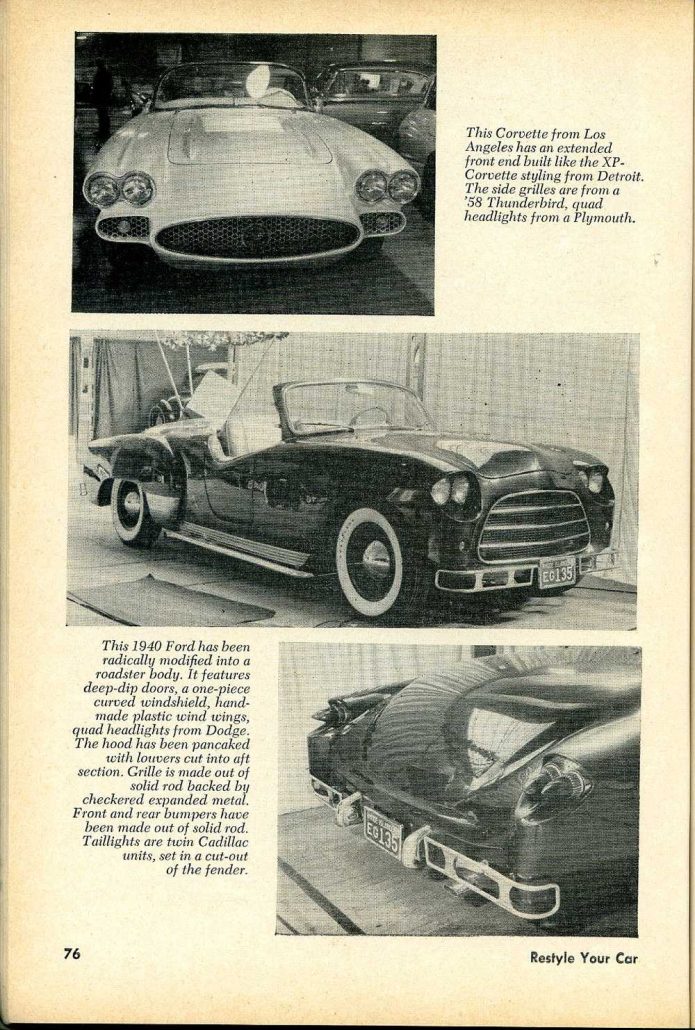 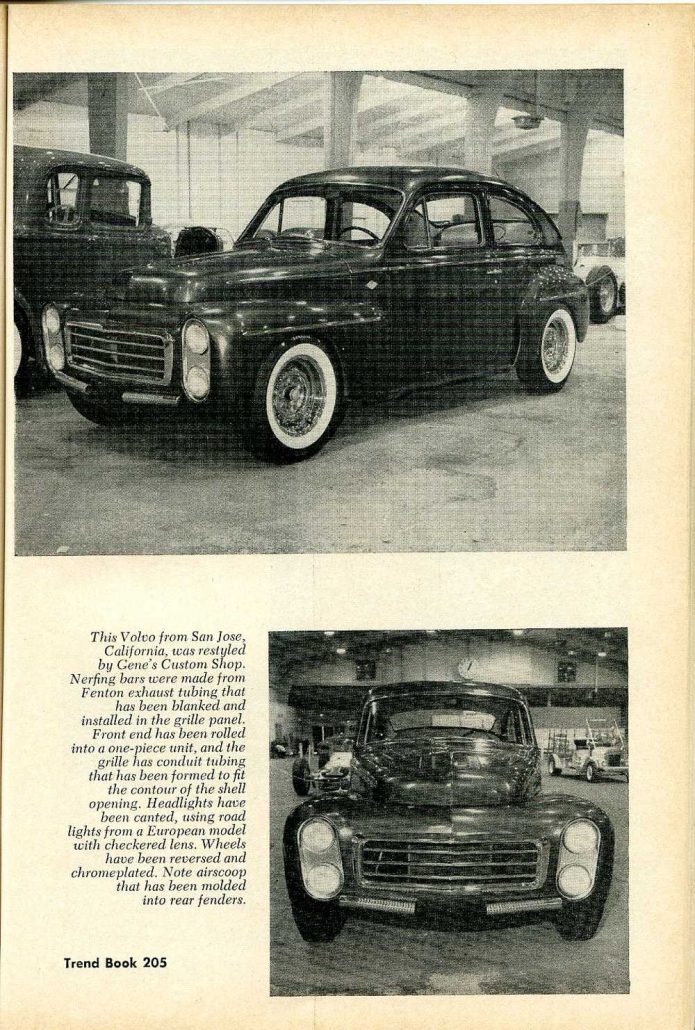 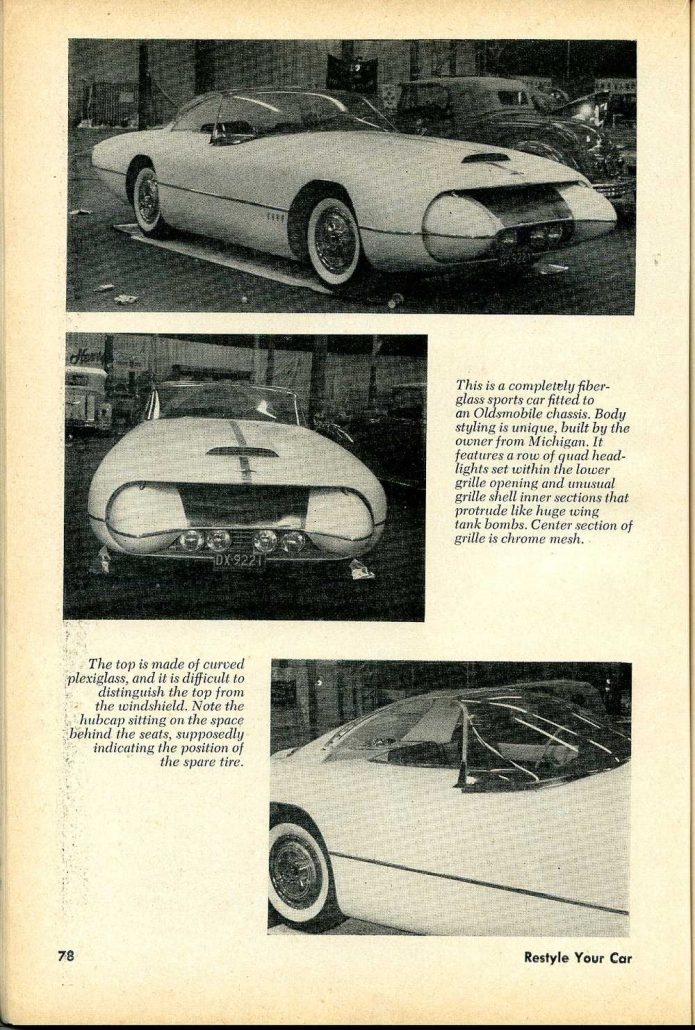 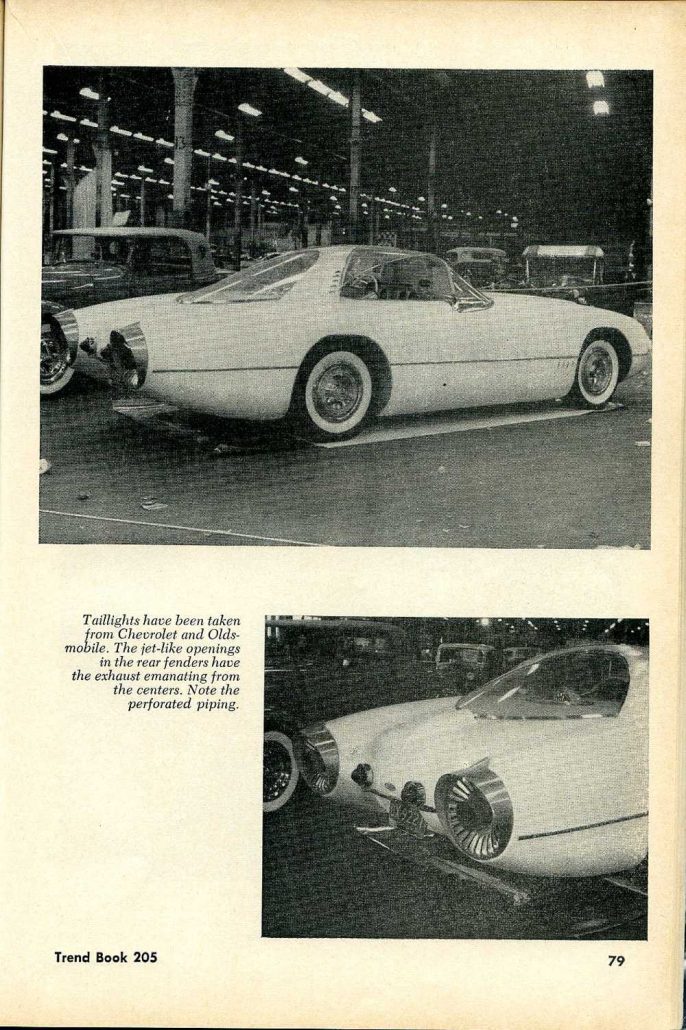 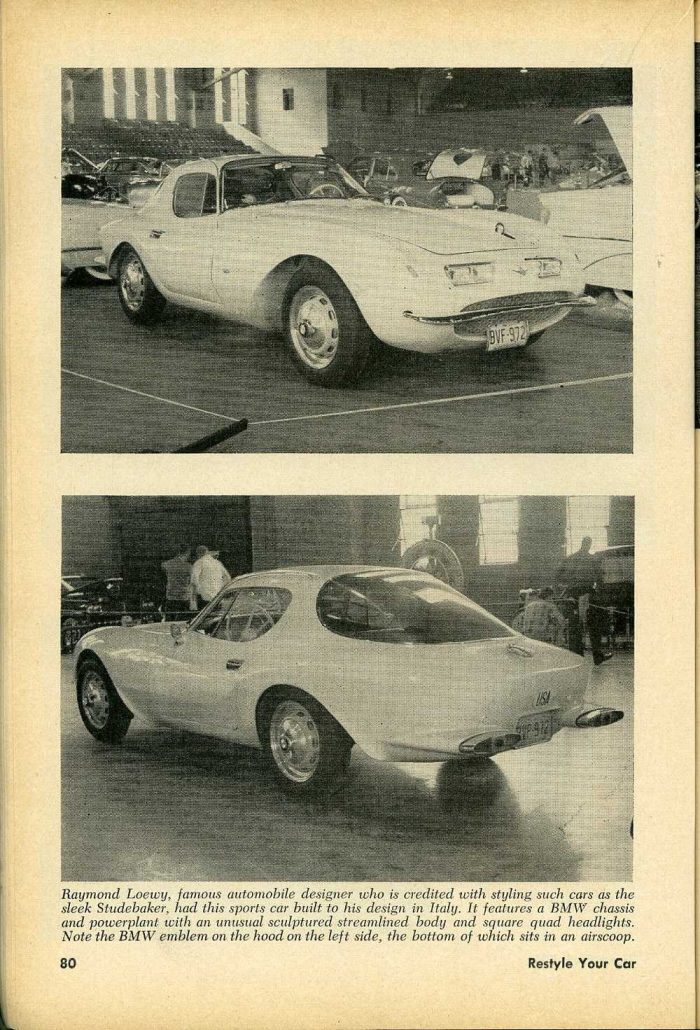 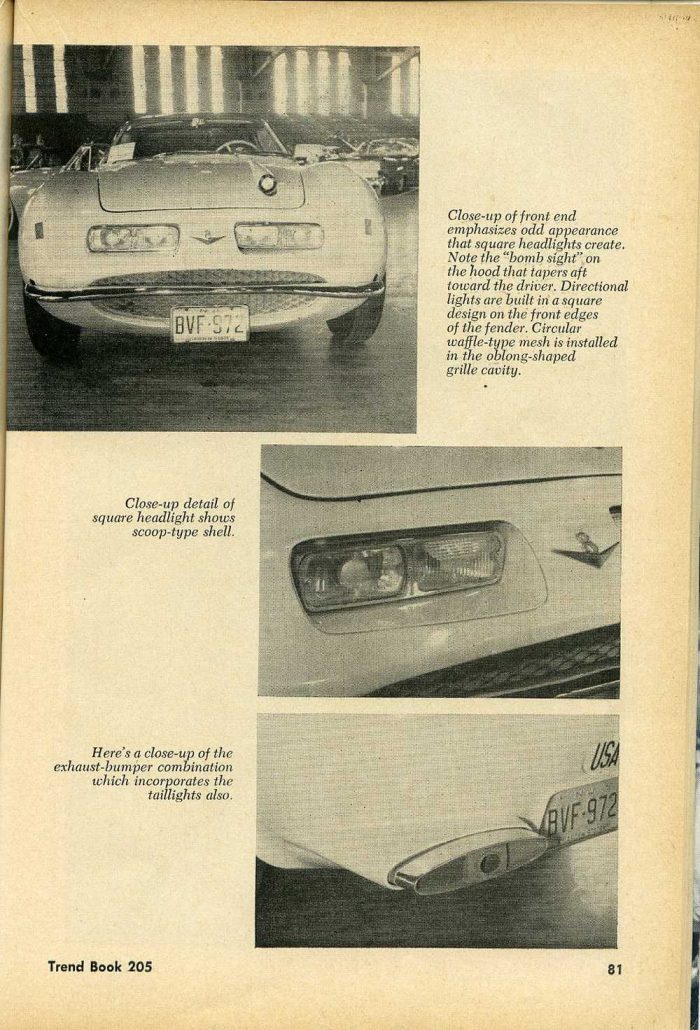 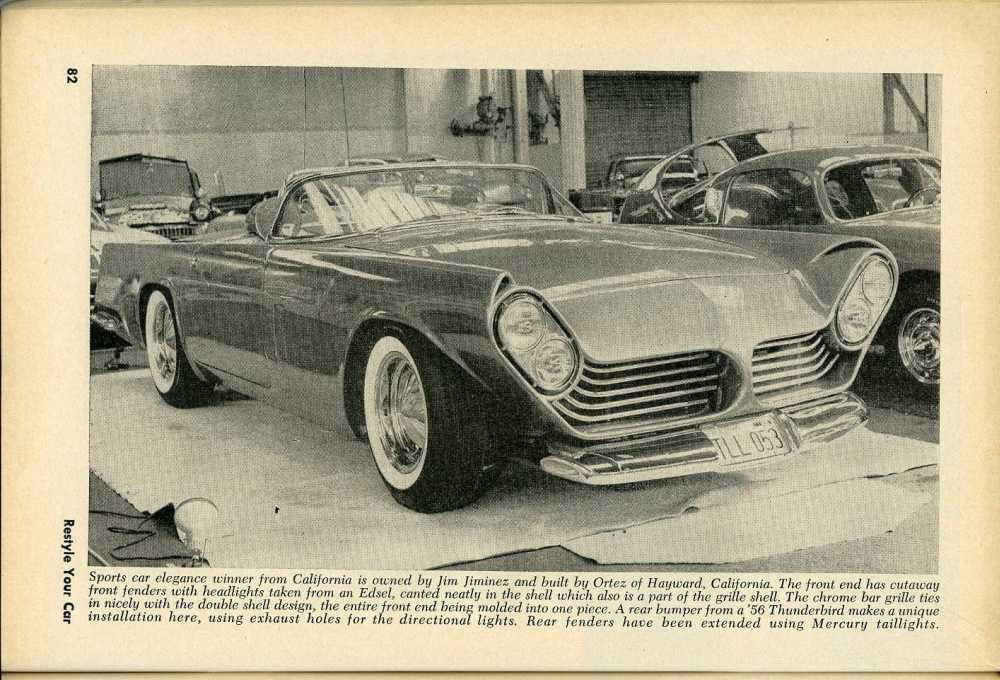 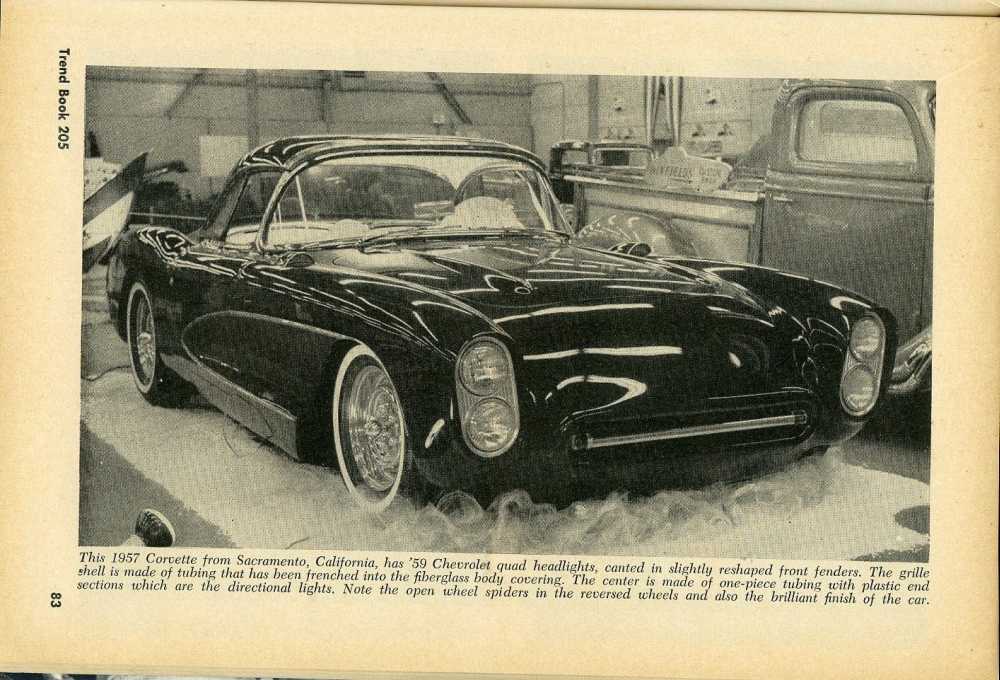 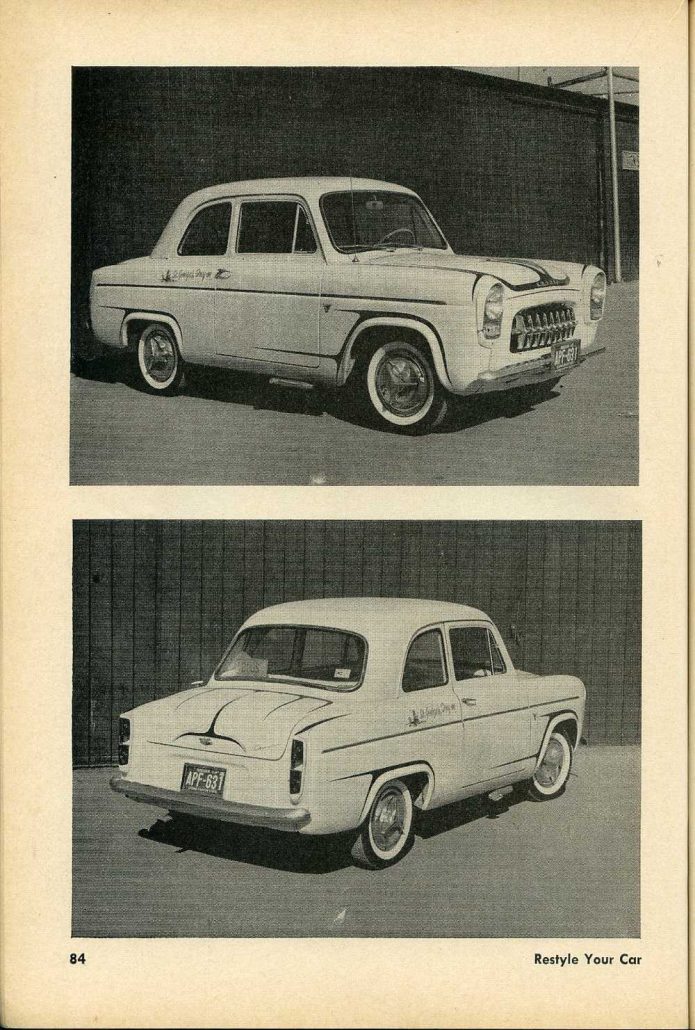 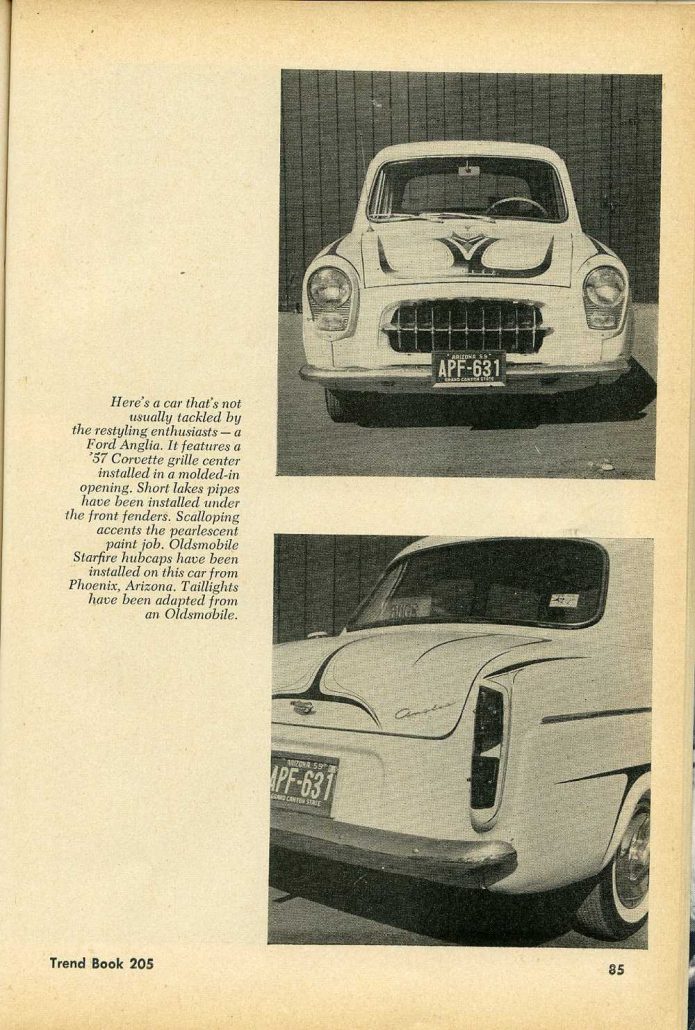 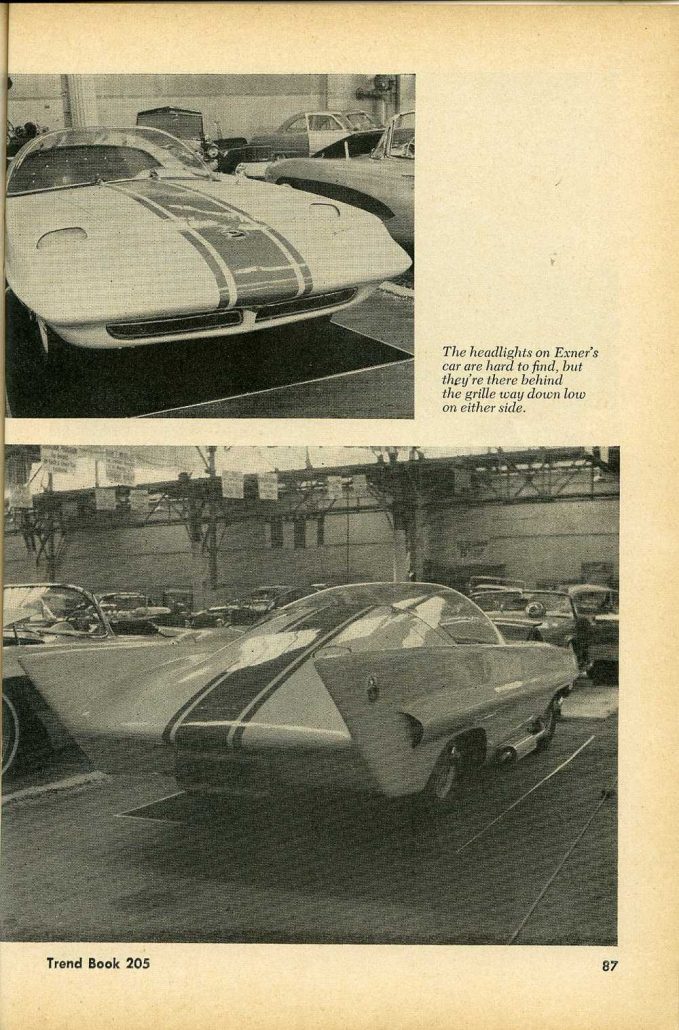 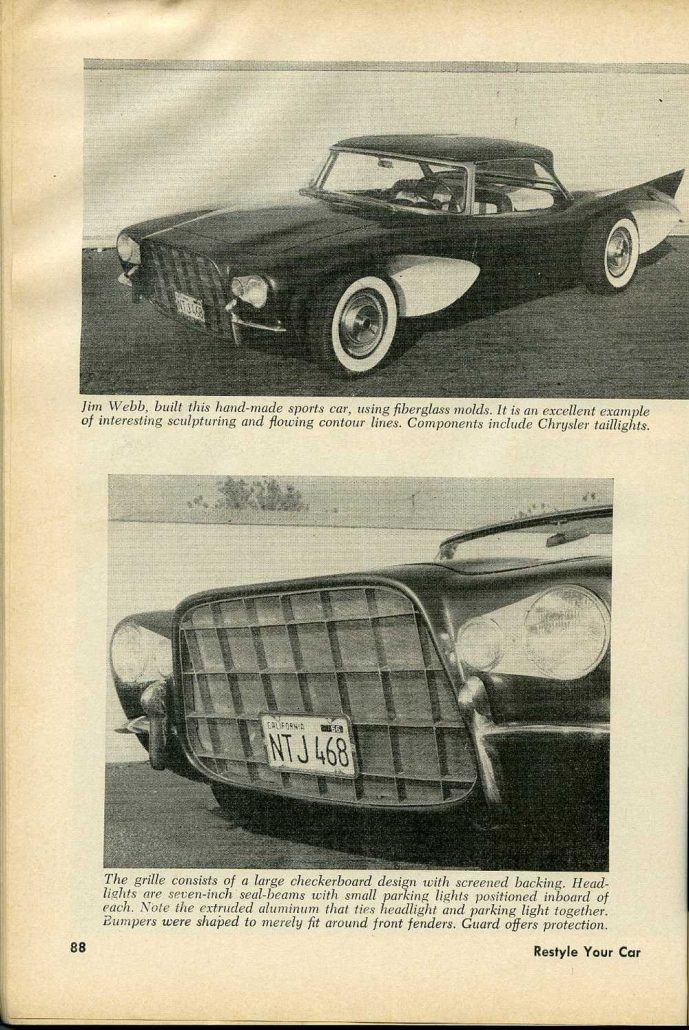 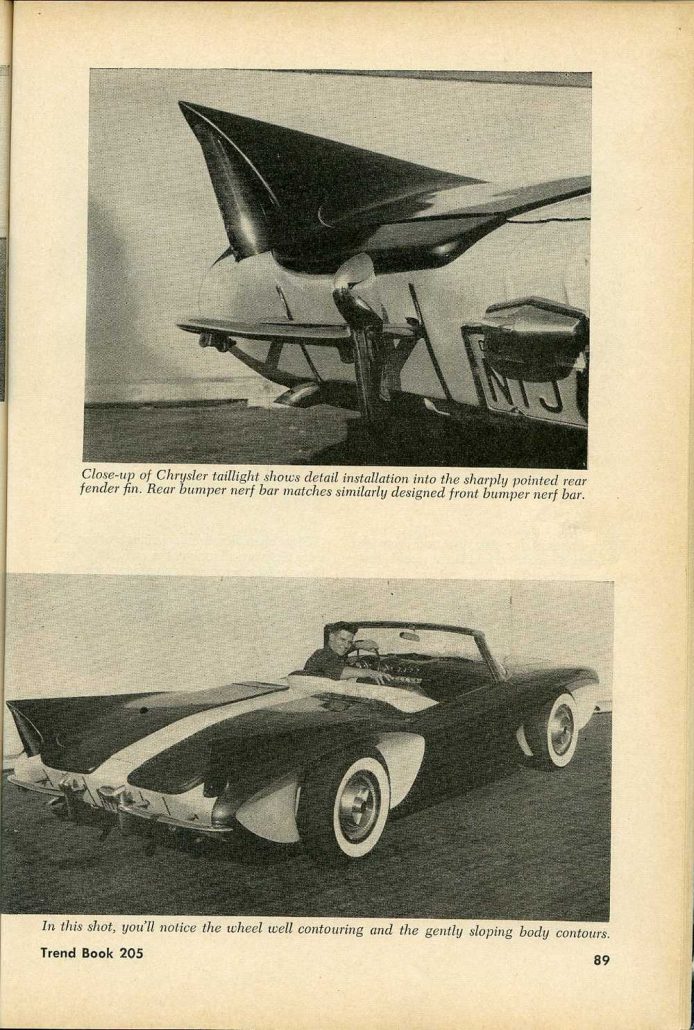 I’ll be featuring more of Jim Potter’s stories and photo archives in the next several months.  He has a story to tell about these cars that can’t be held back, and I’m sure you’ll come to enjoy his artistry with works and pictures as much as I.