Note: This is a multi-part story.  Click here to view all parts of this story

We’ve been researching this car since 2008, but it took our appearance on Ray Evernham’s Velocity TV show “AmeriCarna” in 2015 for us to finally learn what it was.  We’ve had many “adventures” here at Undiscovered Classics, but this was one of the longest, challenging, fun and most rewarding of all.

Let’s talk about the adventure, the car, the story and the people involved, and we’ll do this over a few stories. 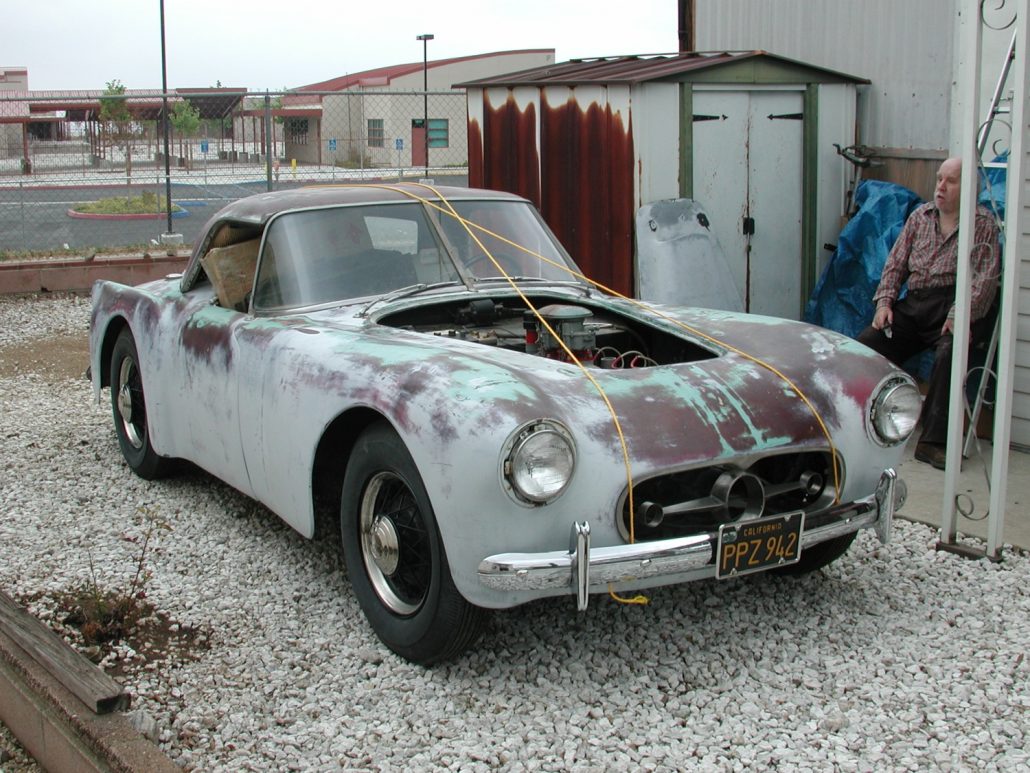 The Man and the Car

Jim Giles was a friend from the start of Forgotten Fiberglass.  He had owned what turned out to be the lead car from the movie “Johnny Dark” – a Wildfire – and other important “Specials” over the years.  Jim had started the restoration of his “Atlas” as he called it some 15 years before we met.  The motor, wheels, tires, and many other parts were restored but the project needed to be assembled, restored and sorted – still quite a bit to do.  Jim wanted to sell the car, so we struck a deal and bought it. 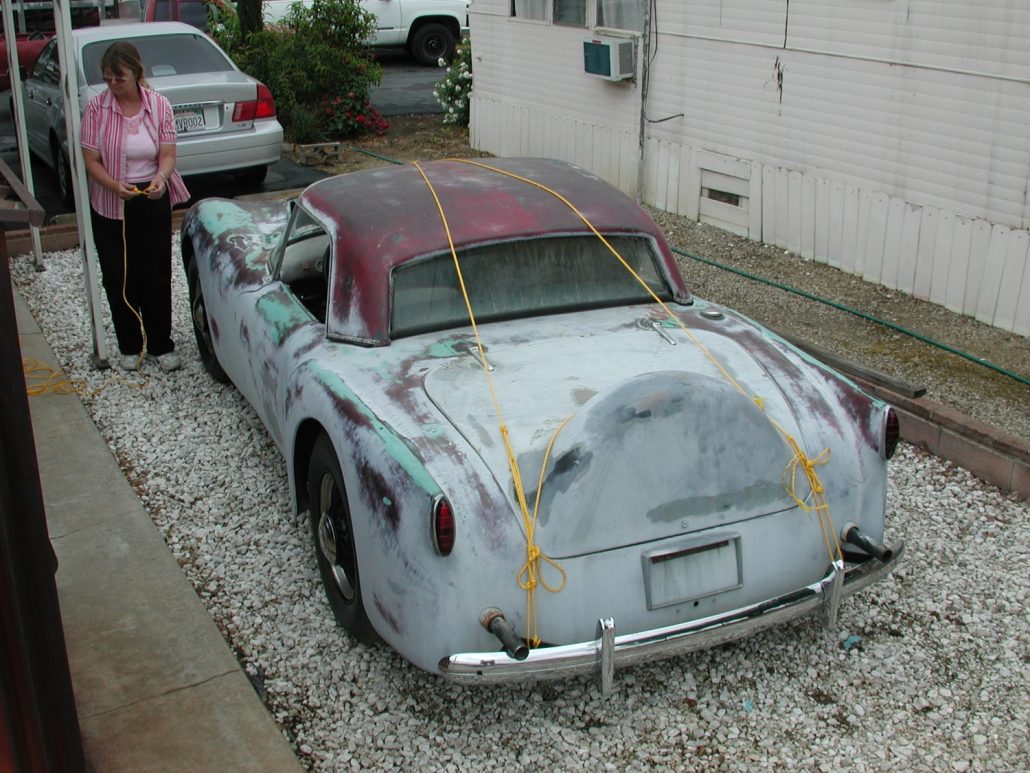 Some of the LeGene Sports Cars Had the Spare Tire in the Trunk – Some Did Not. We removed this feature during restoration.

Jim always thought that there was a similarity in body design to the Allied Falcon.  He theorized that Bill Burke and Mickey Thompson may have made a variant of the Allied Swallow, Falcon or Blackhawk that was undocumented.  That was the reason Jim named it the “Atlas” – which was the first name of the company before they changed it to “Allied.”

It was a good theory, and I tested it in 2009.  When I saw Bill Burke about the Belly Tank we had built under his guidance, I showed him photos of Jim’s car.  He looked at them closely and pronounced….”Nope – not my car.  Never seen it before.”

That was good enough for me so research continued…. 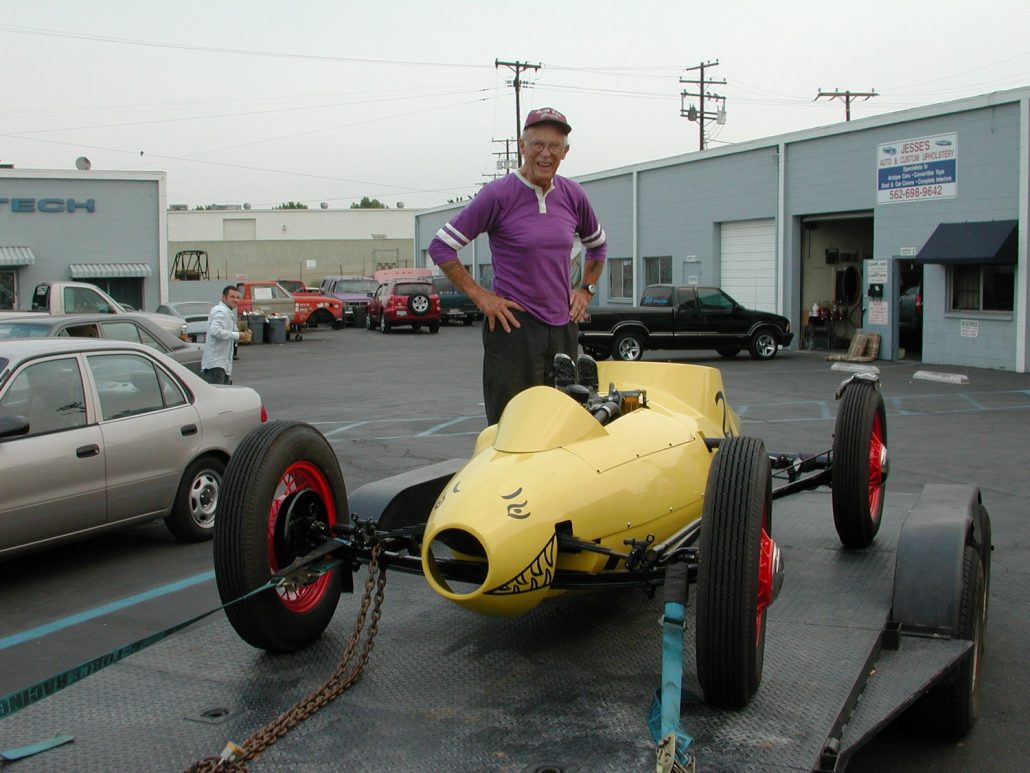 Here’s Bill Burke with the re-creation of his first belly tank in 2009. Thanks Bill for a great time building this under your guidance.

So…after purchasing the car, I flew out to California and made preparations to pick up and store it.  Good friends Ron and Sonya Kellogg had volunteered a storage space for us so when I arrived the three of us coordinated picking up the car which was at Jim’s house in Calimesa, California.  Great memories and great times that day as we headed east, met Jim, talked about the car and had it loaded for transport.  In short time we were back in Whittier, California and storing the car with one of Ron’s friends.  It would be a year before I would return and pick up the car. 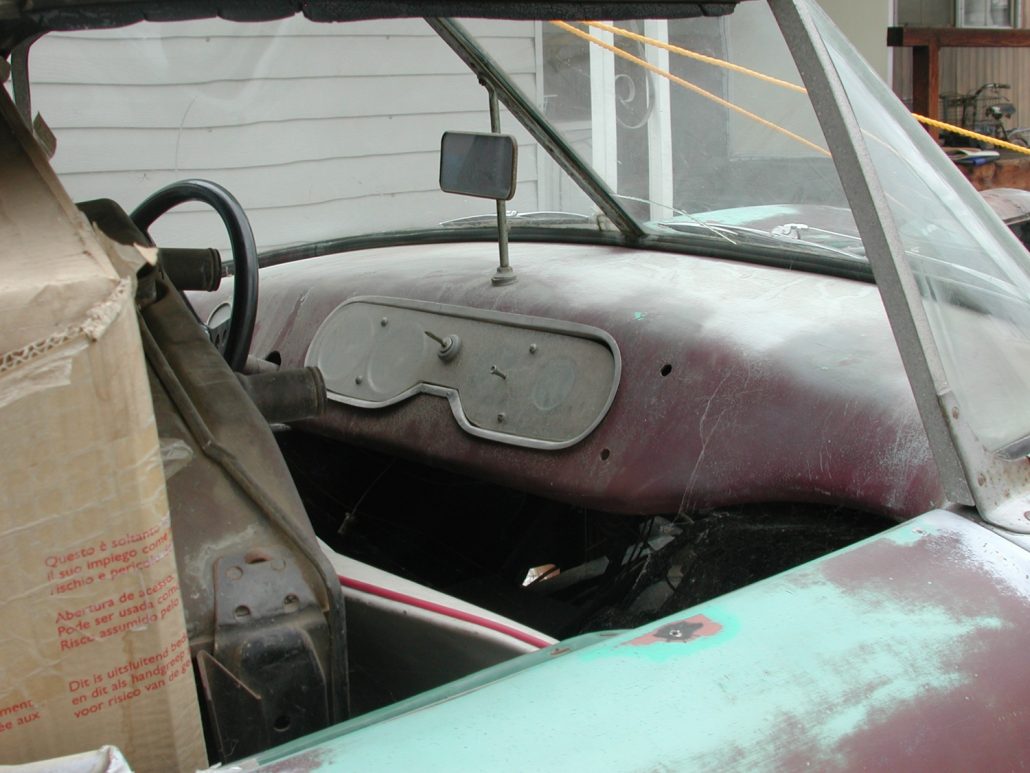 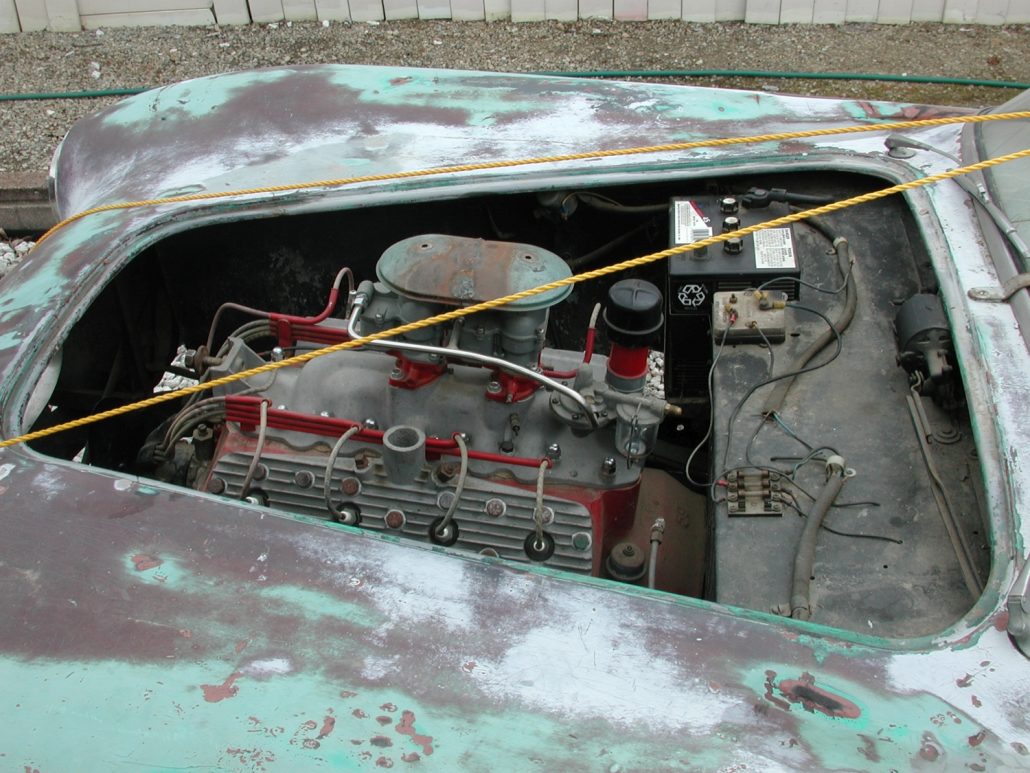 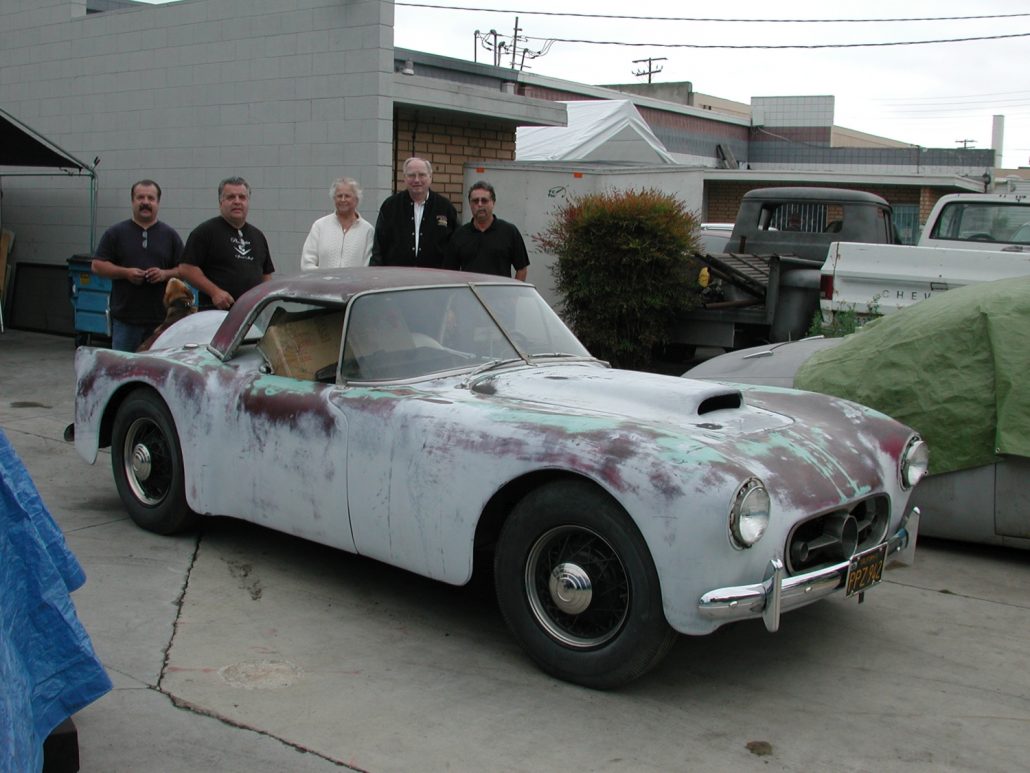 Here we are dropping off the car at Ron’s storage location. Ron and Sonya Kellogg are the second and third from the right.

In 2009 I trailered our Burke Belly Tank to Bonneville and later dropped it off for a long-term display at the NHRA Museum in Pomona, California.  While I was there, we made plans to pick up some recent purchases including the car we had bought the previous year. 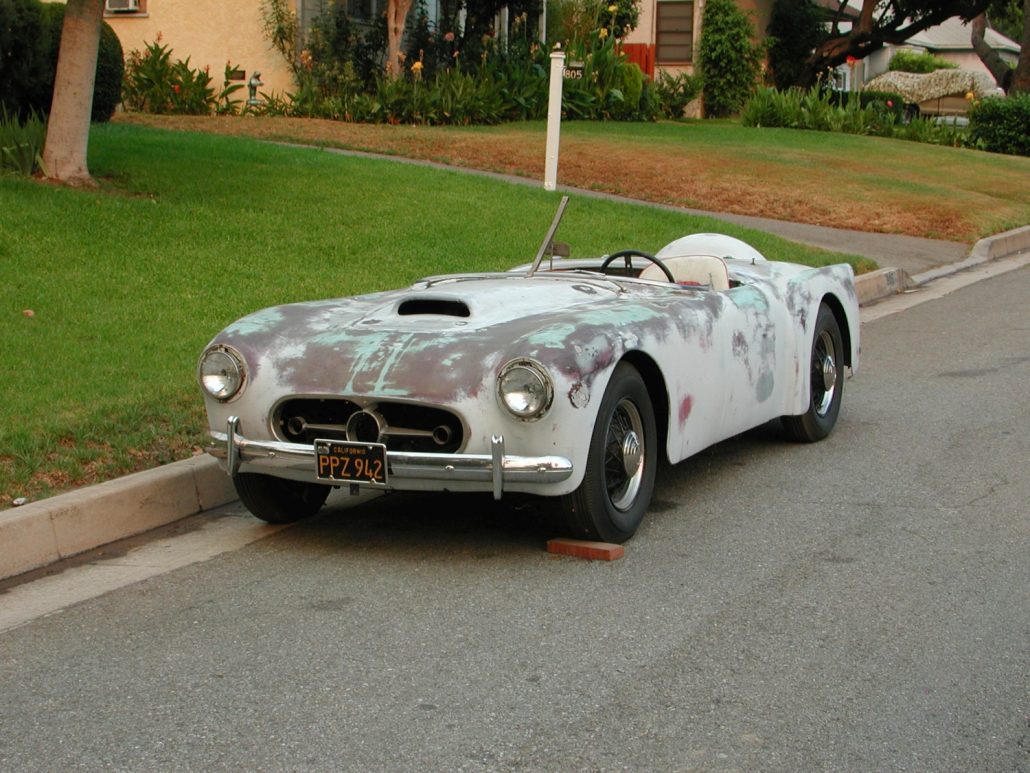 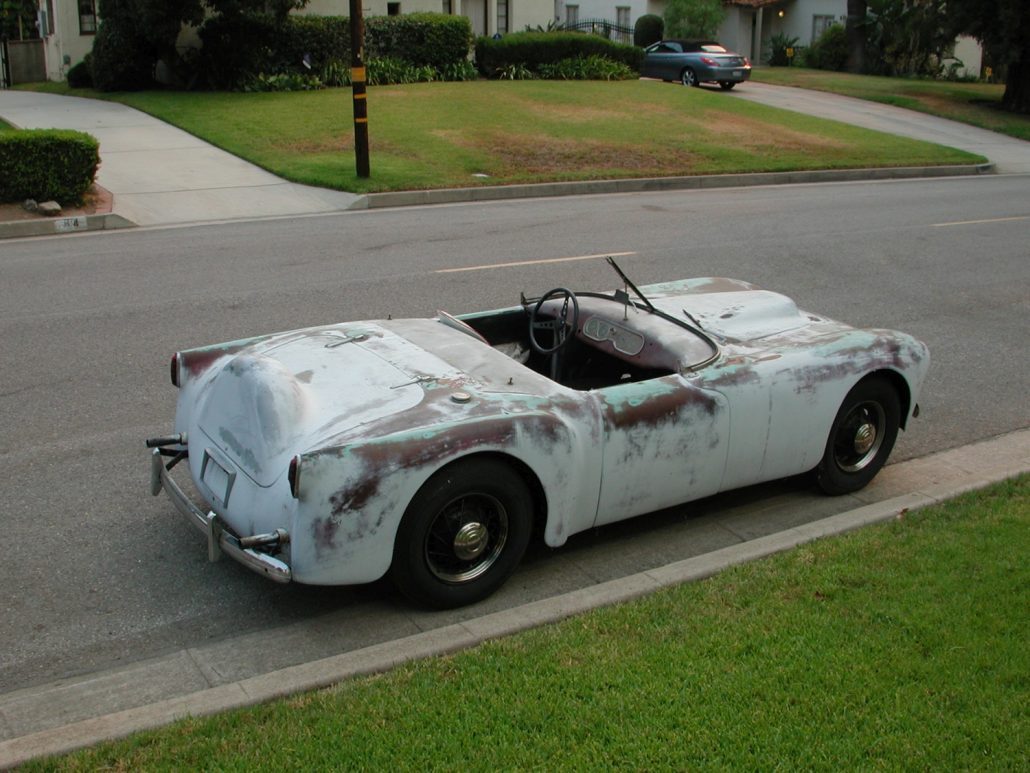 A few days after I arrived, I dropped off the car at Erich Schultz home and loaded a Byers SR100 body we had purchased – the last known uncut Byers SR-100 body known to exist.  Erich and I had the challenge of loading the car, the body and more for my trip back to Tampa, Florida.  And with his help I was ready to go and on my way. 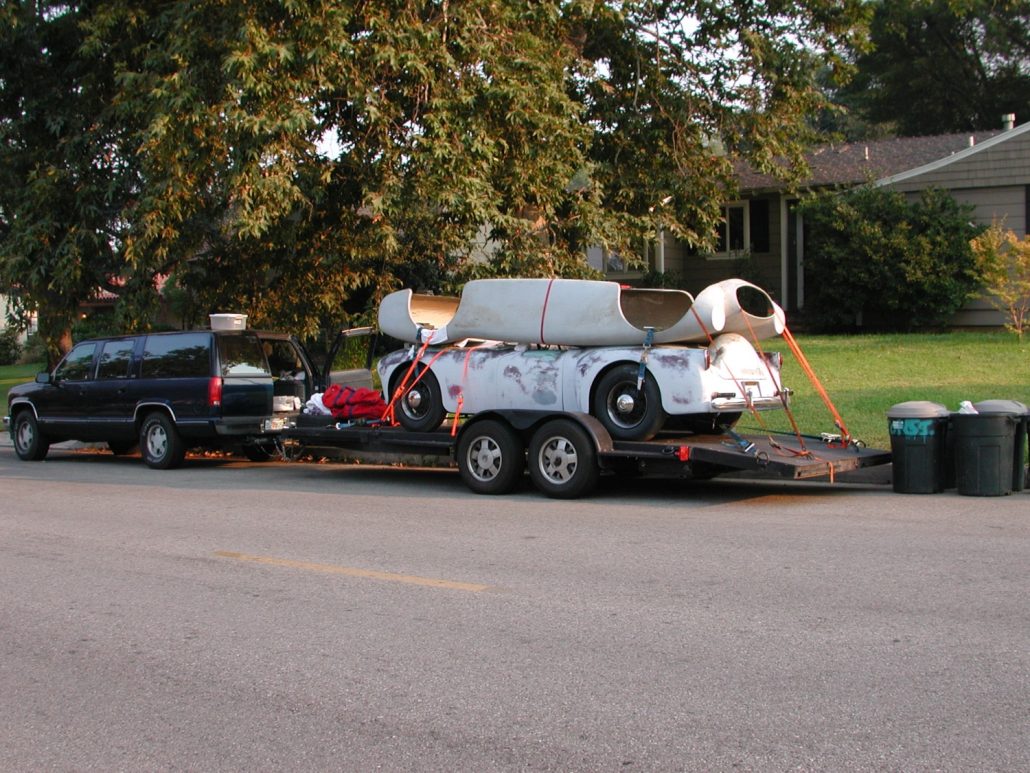 On the way to California I had the finished Burke Belly Tank in tow. On the way home to Florida we had the “LeGene” sports car and a Byers SR100 body behind us. Very rare to see an empty trailer behind us when we’re on the move 🙂 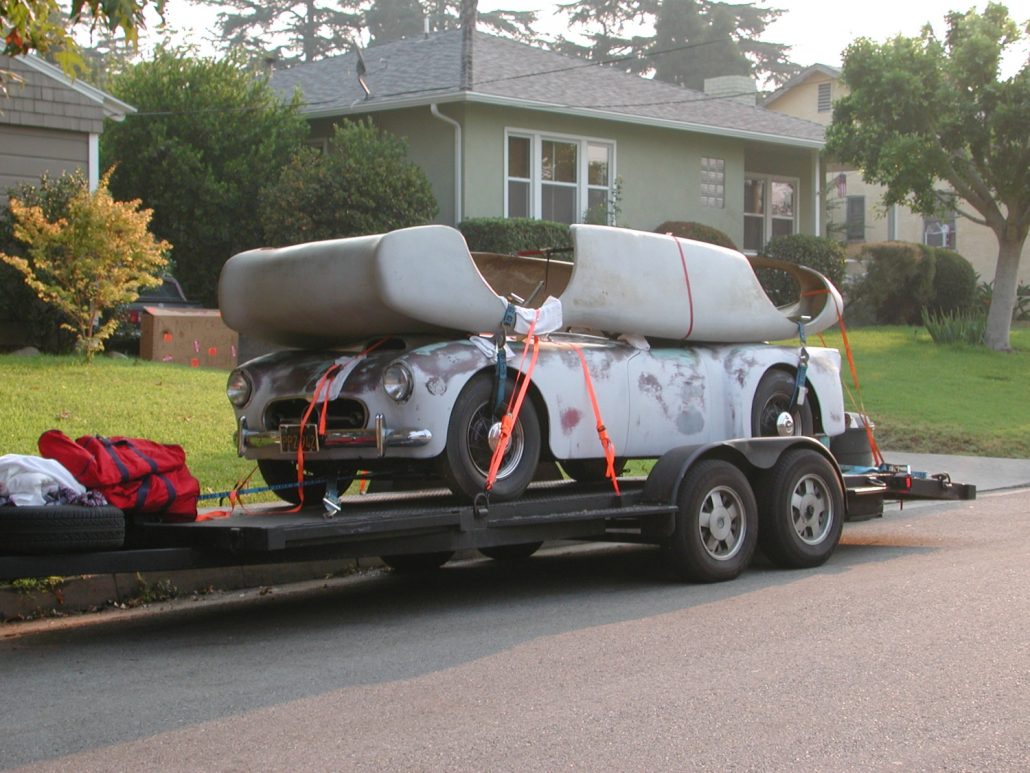 Along the way I stopped and visited with Dennis Gerdes and Rodney Packwood in Idyllwild, California and Mel and Steven Keys in Sulfur, Louisiana.  A few days later I was home – 6 weeks on the road…8000+ miles…not bad for an ole guy and and Suburban too. 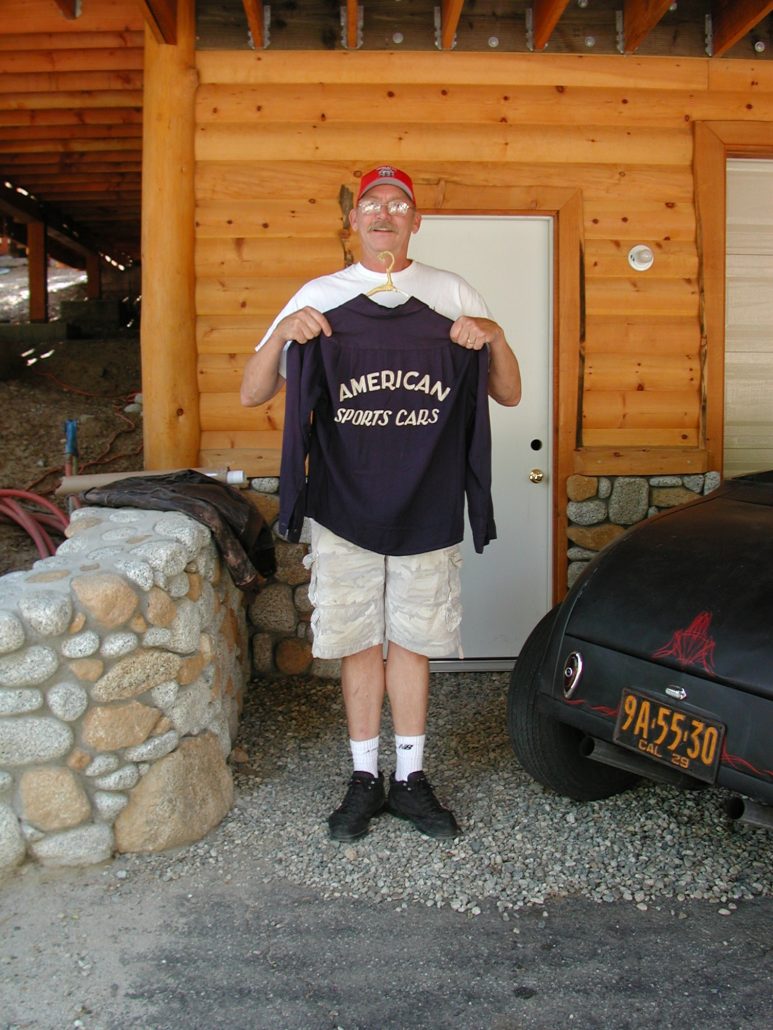 Here Dennis Gerdes is Showing His Father’s Sports Car Jacket from the early 1950s. Dennis’ father was Warren Gerdes who was the Foreman at Glasspar responsible for supervising the “build” of all Glasspar G2 bodies. He loved his sports cars too 🙂 Thanks Dennis. 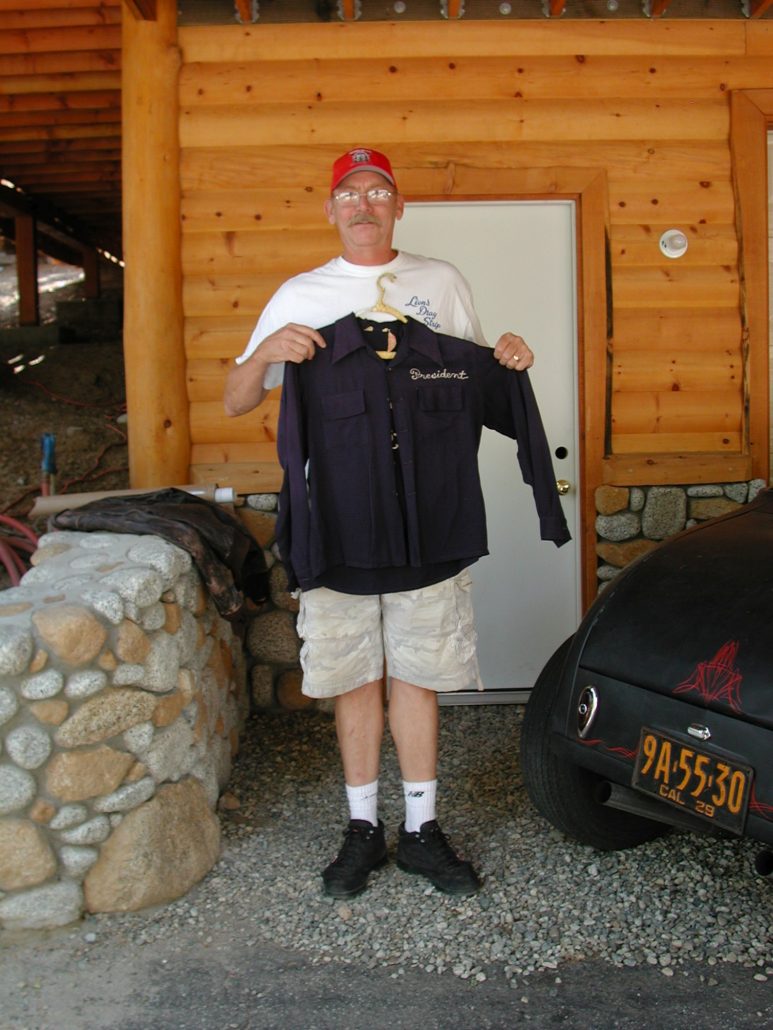 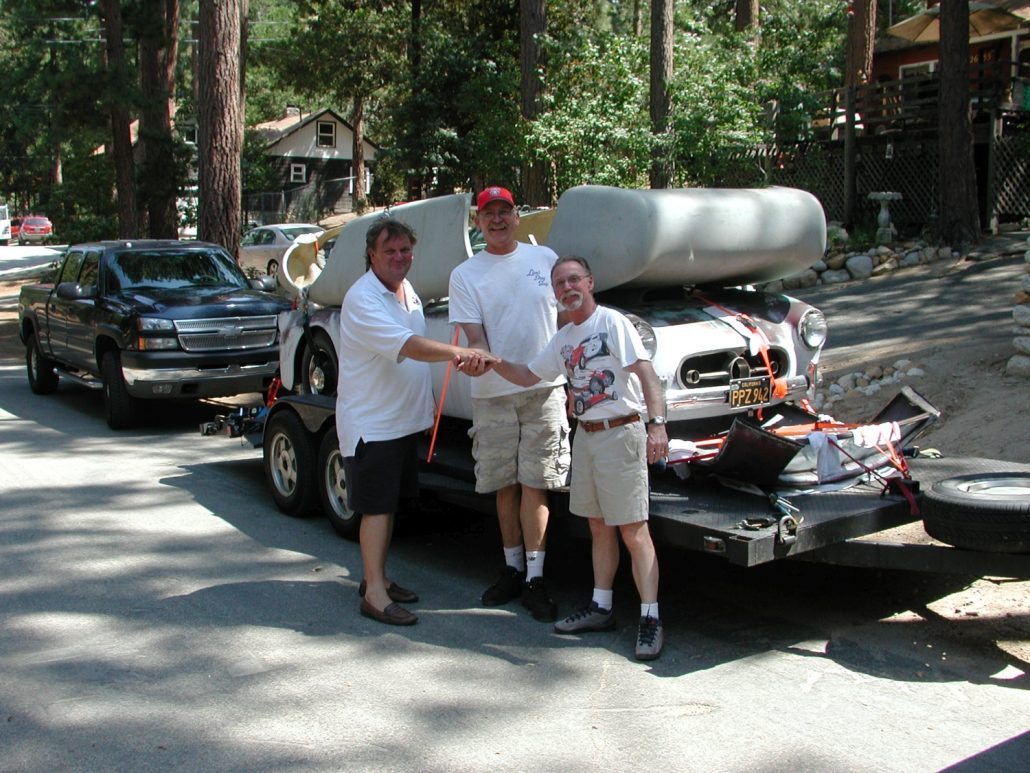 From Left To Right is Geoff Hacker, Dennis Gerdes and Rodney Packwood. We spent some time in Idyllwild, California were Dennis and his wife Darcy live.

What we found and took home to Tampa, Florida would take nearly 8 years to learn its history.  And the journey in this case was as much of the fun as the destination.  Stay tuned for part 2 and more gang. 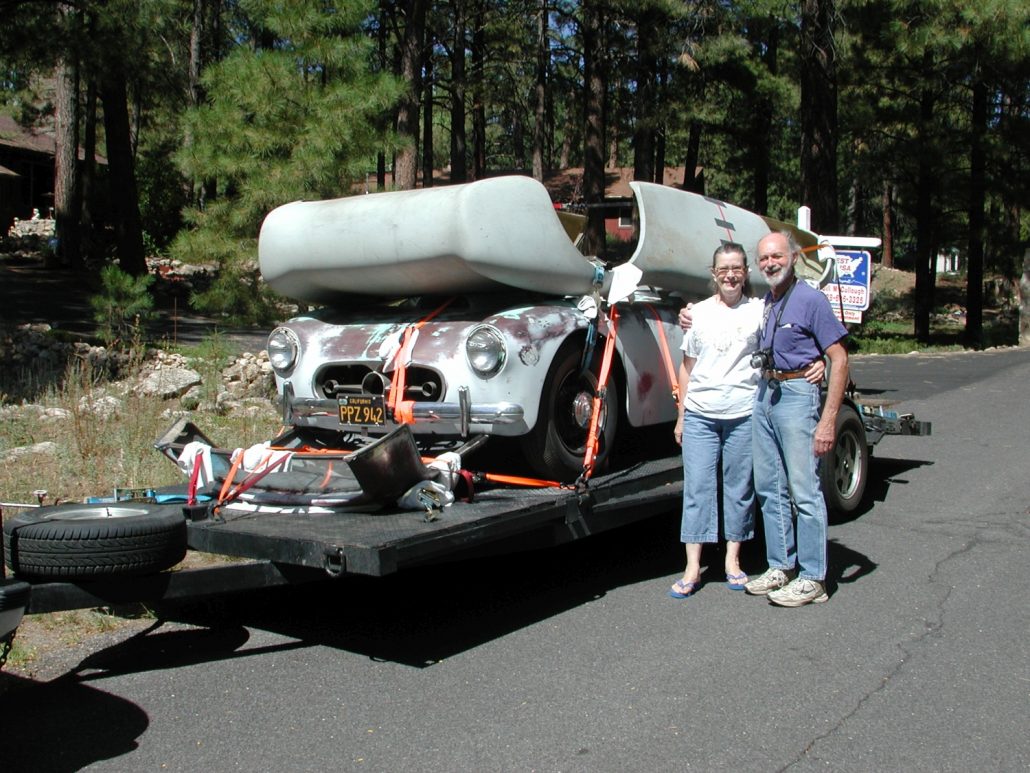 I passed through Flagstaff, Arizona and visited with Merrill and Gerianne Powell of Victress Sports Car Fame. 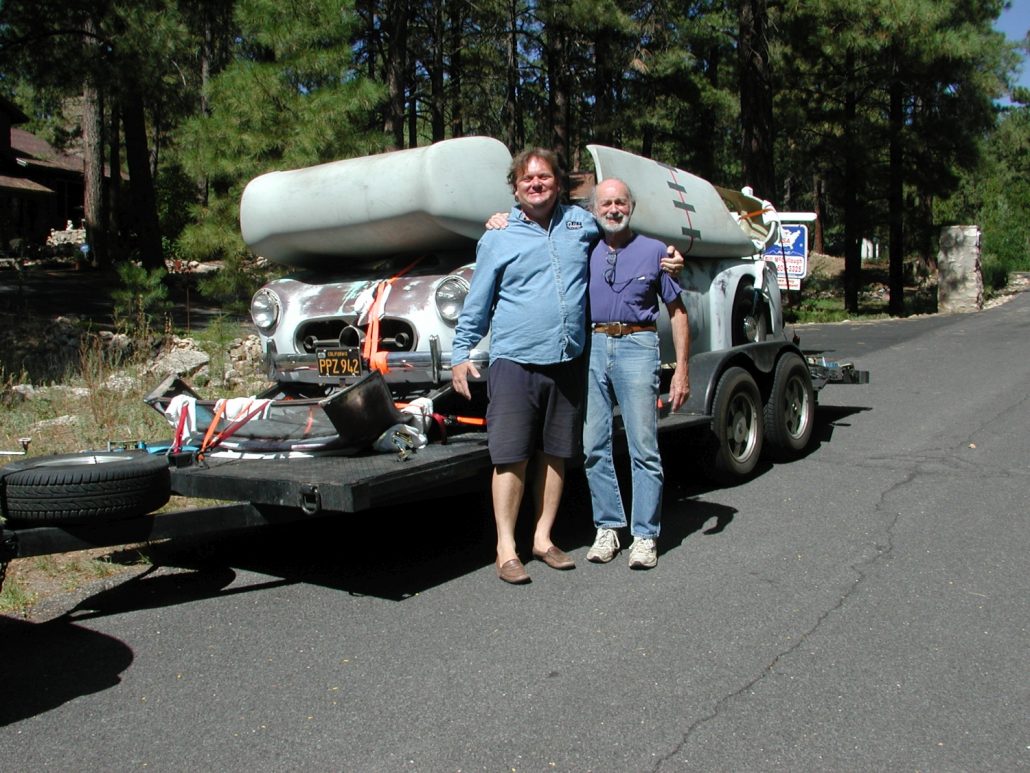 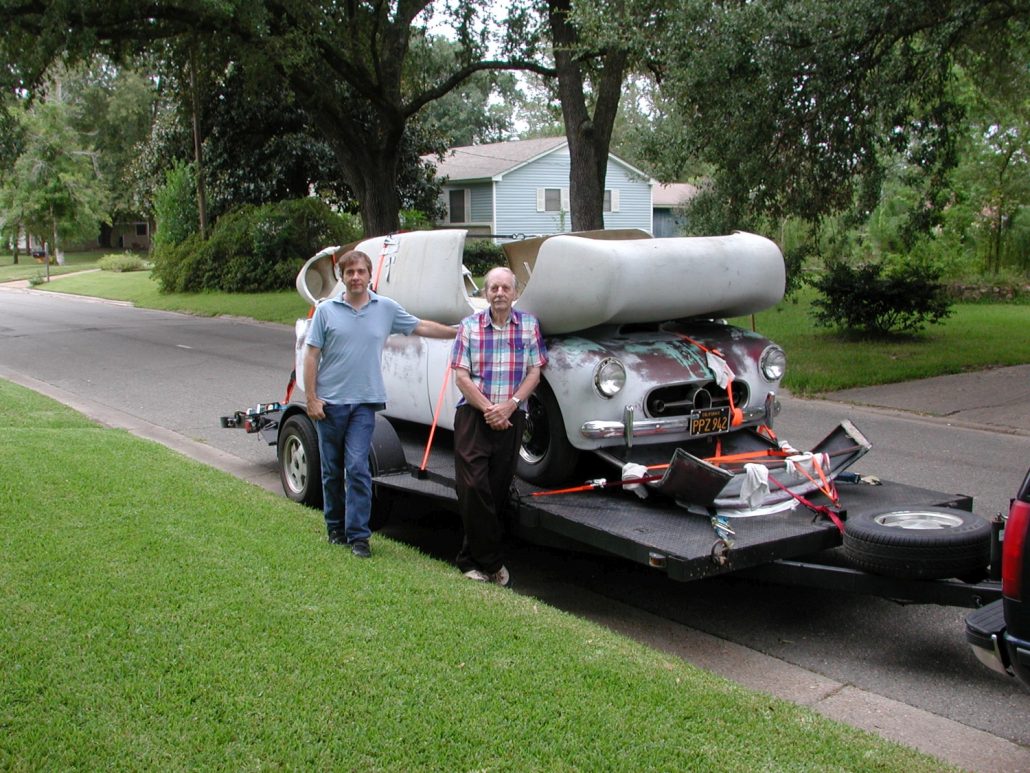 I also stopped to visit Mel and Steven Keys in Sulfur, Louisiana. Mel was good friends with the folks at Victress and it is always good to see him and his family. 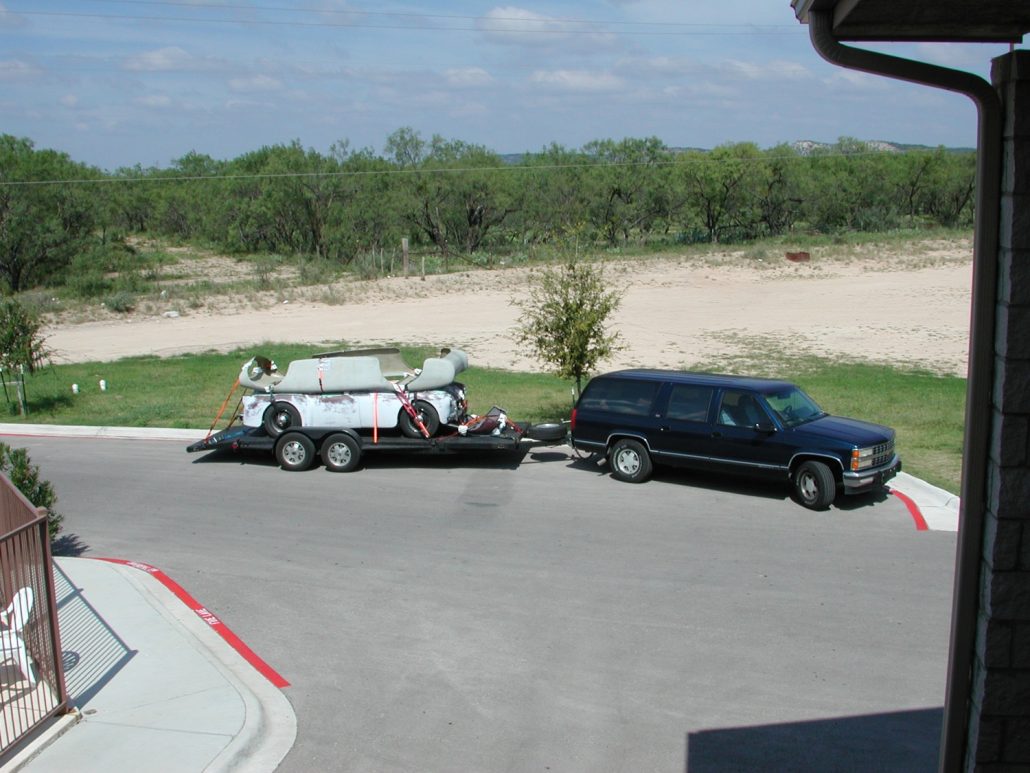 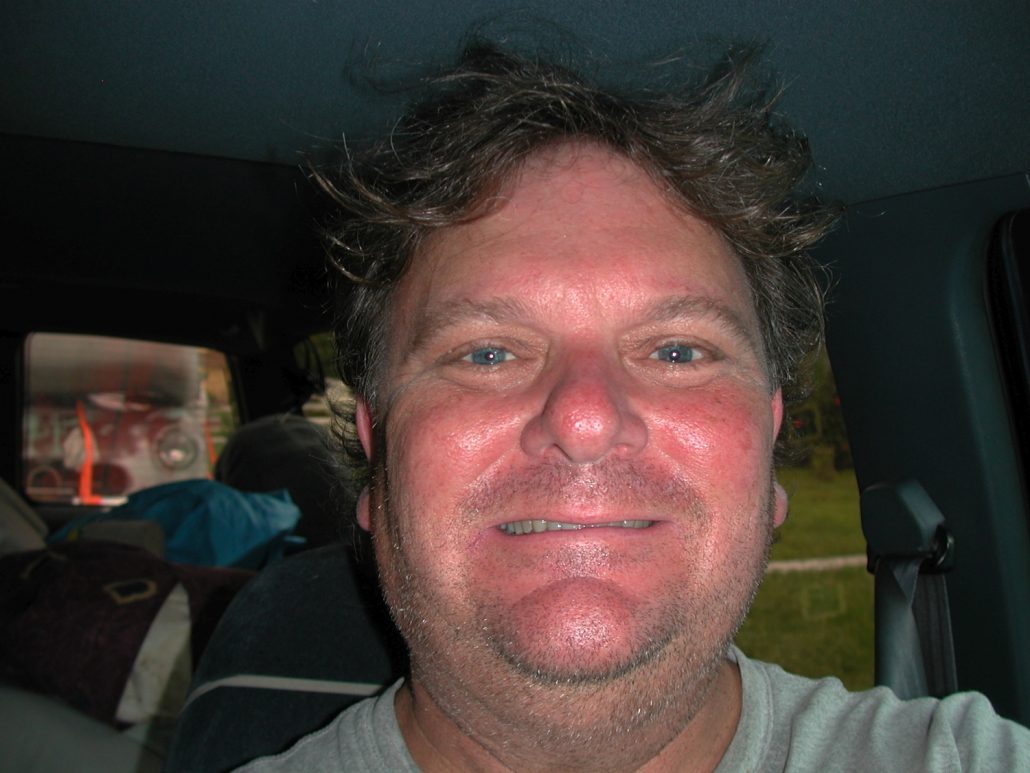