Acquisitions of special cars often take years to make happen – and this happens more than you think.  We try and track down all the leads – lock, stock and barrel and today’s story about the Carl Luckenbach Special continues to be written to this day.

Back in 2009, we had started sharing some of our fiberglass adventure stories with Dan Strohl of Hemmings.  Dan Strohl, in turn, heard from folks in his blog and e-mail wanting to share some of their fiber-stories and an occasional car or mystery too.  It was late in 2009, Dan received the following e-mail:

I have been thinking about sending pictures of a fiberglass car that I know of into you for identification and I see that there are two guys that are doing research on fiberglass cars and they may be able to help me.  Could you pass these pictures on to these guys and have them contact me?

We love mystery cars, and after appropriate introductions here are the photos we received from Terry below.  We had a good starting place but we needed to talk with the owner and learn the car’s history too.  It was not a car we’ve seen before. 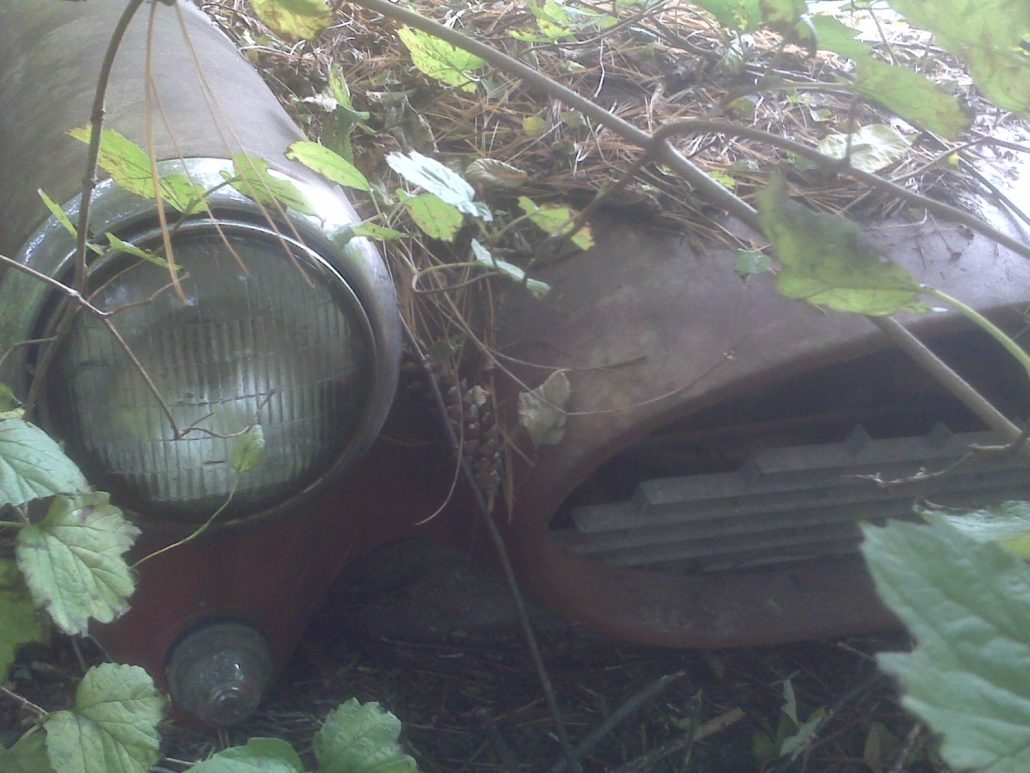 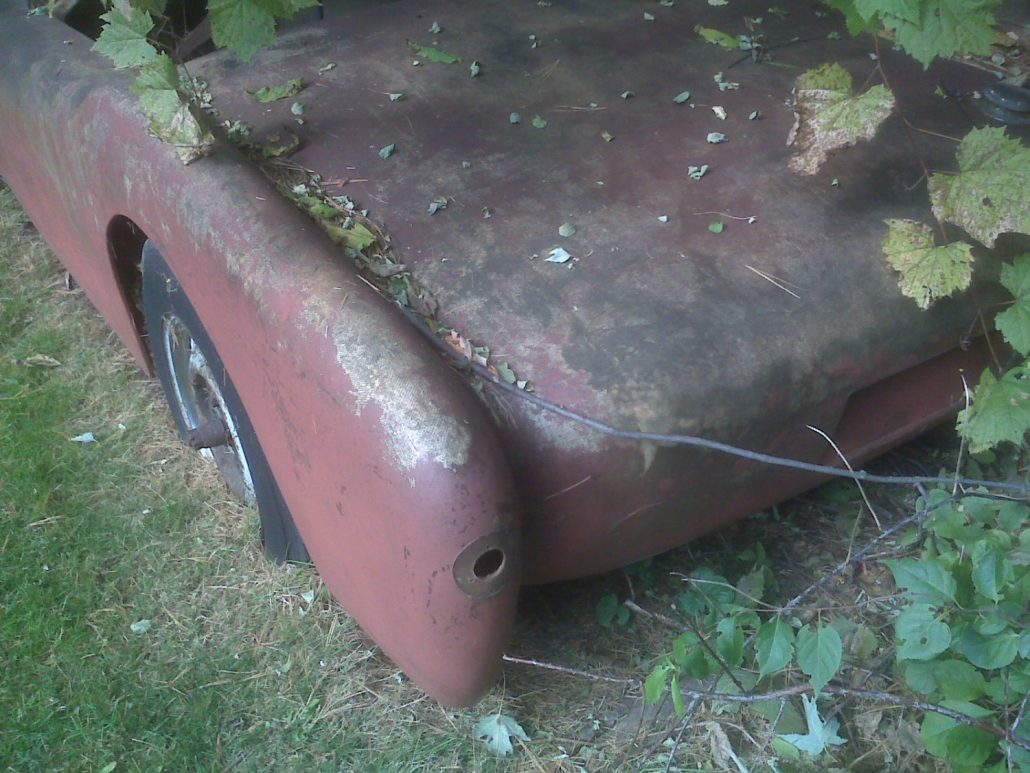 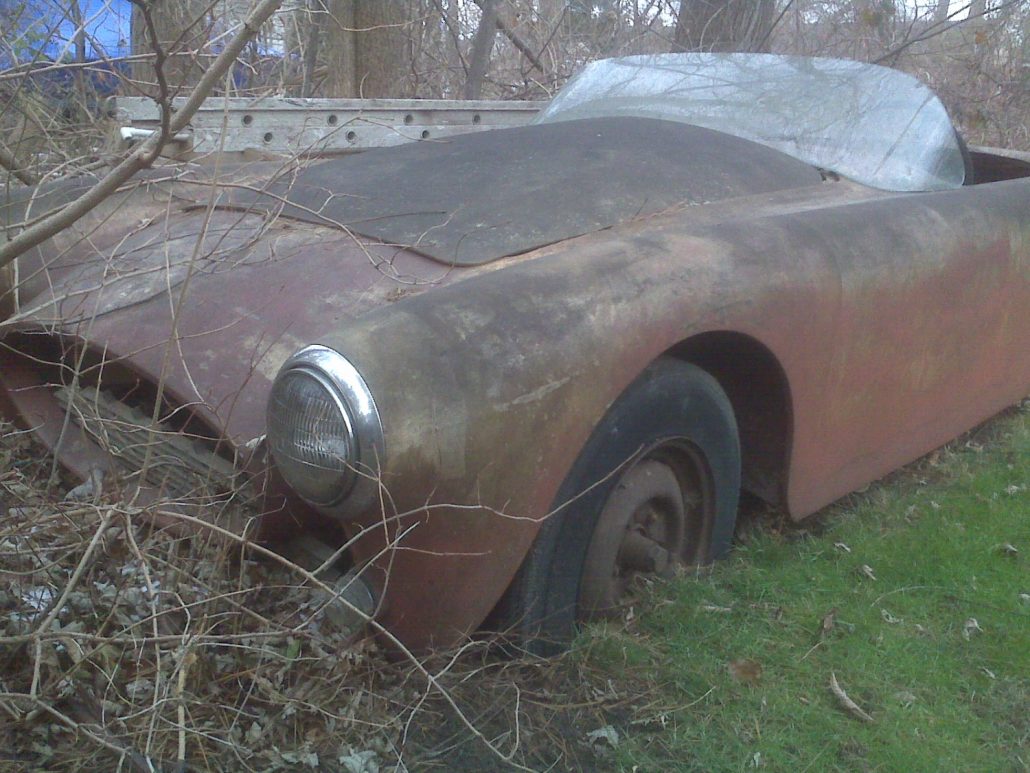 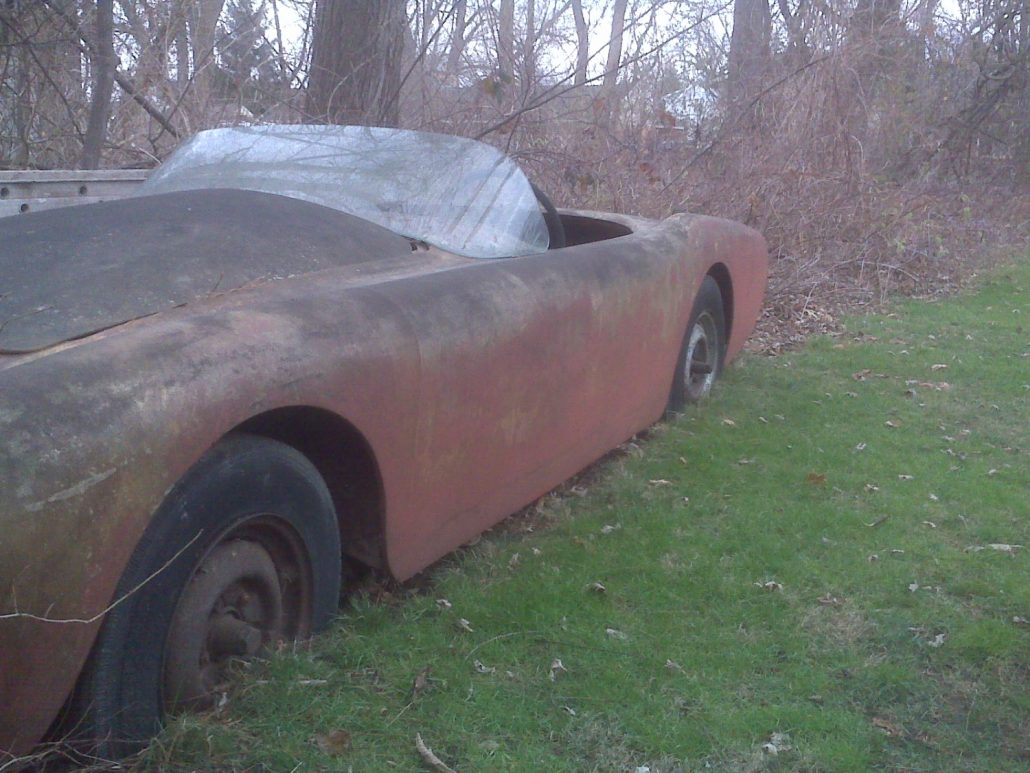 Each car has its own story and often times we have to travel to the location where the car is to learn the story and meet the owners.  Traveling to Michigan is easier than traveling to points west of the Mississippi for us Florida folks, so it took some time but in 2010 we were in Michigan and my good friend Stan Fowler volunteered (was volunteered) to join us on the hunt.

“Want to go to Waterford, Michigan and check out a lost car?” I asked Stan.

He agreed and off we went.  Here are some of the photos we took that day: 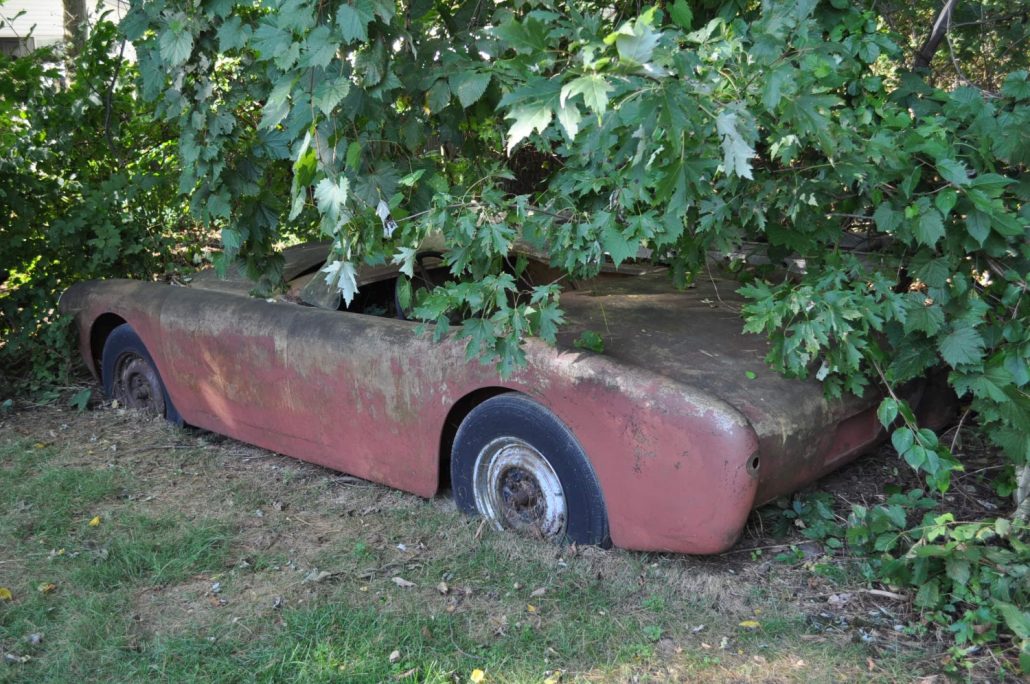 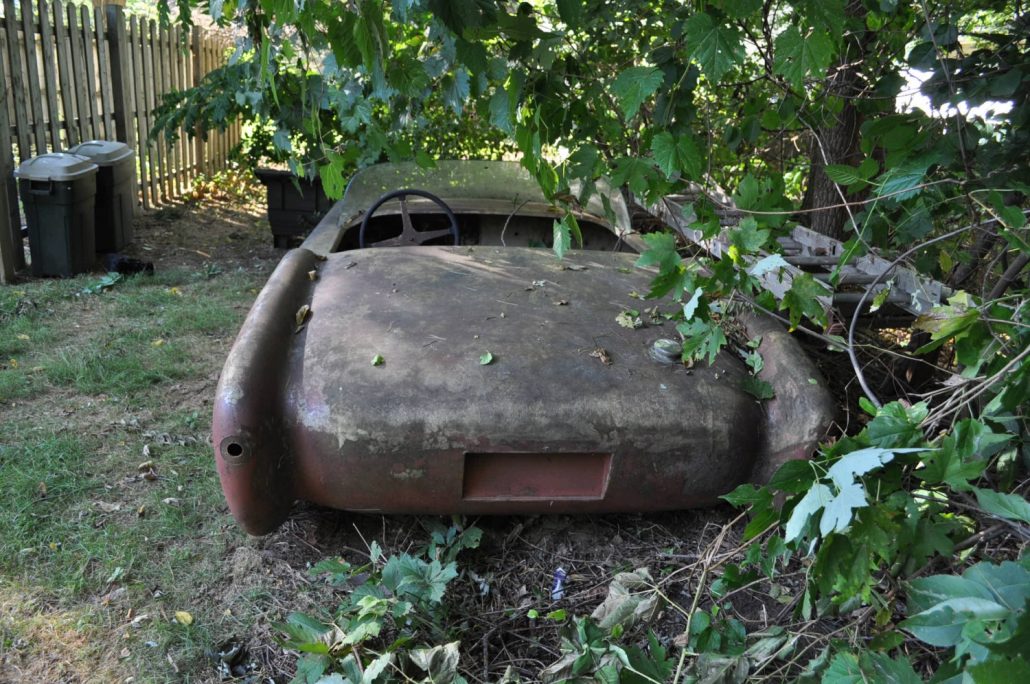 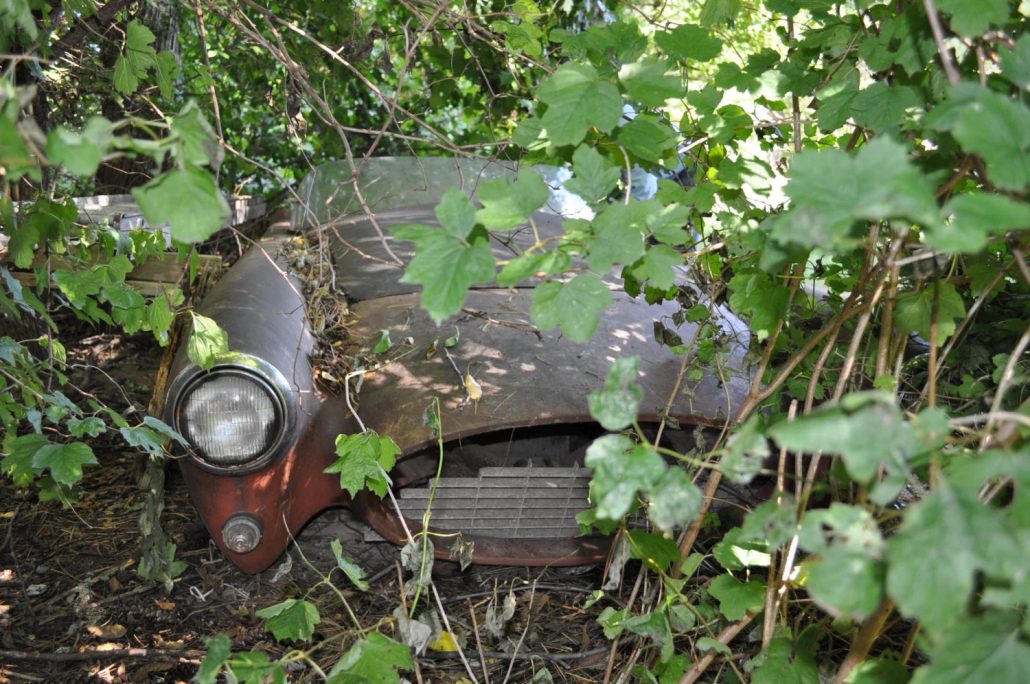 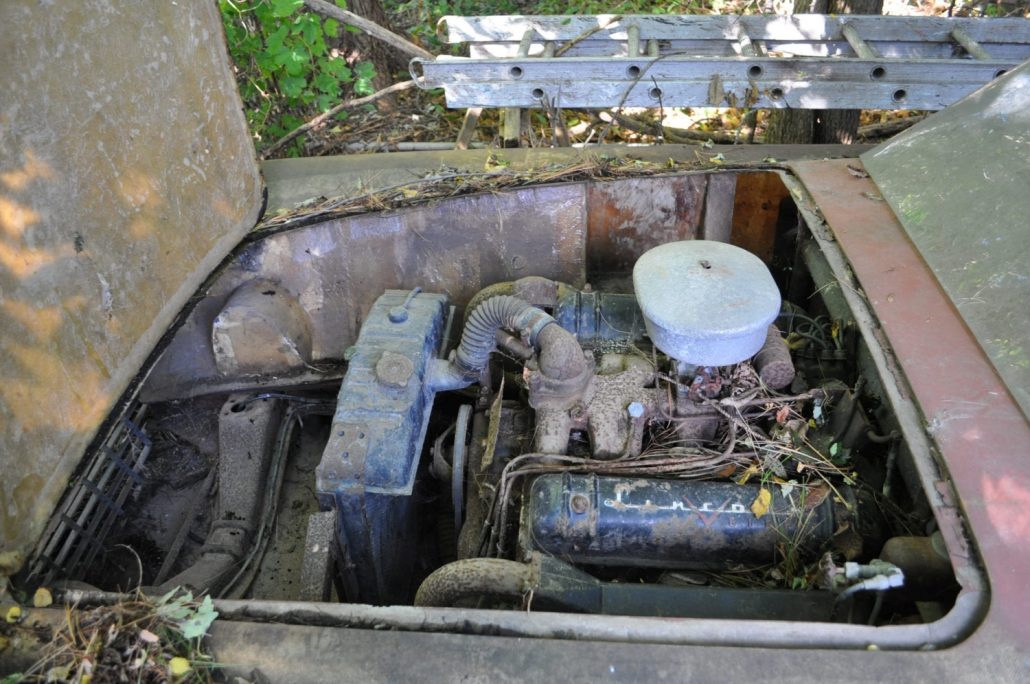 During our visit, we did a short video which you can see below of this “mystery car.”  We also met the owner of the house where the car was located and made plans to contact her son who owned the car.  So many steps in tracking down the history of lost cars, and it may take time but it’s always fun.  You can check out the short video below.

In short order, we were able to talk to the owner – Randy Bonneau – and he was and is a great guy.  He had purchased the car back in the early 1970s and had owned it now for about 40 years.  Randy was getting close to retirement and his thoughts were to move and restore the car in the near future.  That’s a great idea and we planned to keep in touch and offer help if needed along the way.  The more cars in this “niche” that are restored – the better for all of us.

Randy did add one thing.  He knew that the builder of the car was a person named Carl Luckenbach who had designed the Pontiac Superdome.  I asked him if he ever contacted Carl about the car and Randy said “no.”

That was something we had to fix – and fix in the near future.  Which will lead us to Part 2 of the story.

Click Here To Review All Information On “One-Off Sports Cars”