At Undiscovered Classics we’re proud to have created a community that both helps with research and invites those with information about these cars to contribute – an active research and collaboration website.  And its just these unique ingredients that have helped us identify lost cars – time and time again.  And we have Anthony Di Tucci to thanks for his help with the story and the car today.

Anthony lives in San Pedro, California with his family, and they have lived in this community most of their lives.  He recently contacted me concerning a car that his wife’s uncle built in the 1950s called the “Zaba Special.”  Anthony explained to me that “Zaba” was Croatian for “frog” and he had many photos of it that he could share – and he did.  And with that first call and e-mail from Anthony, a 10+ year mystery of a “lost car” came to an end. 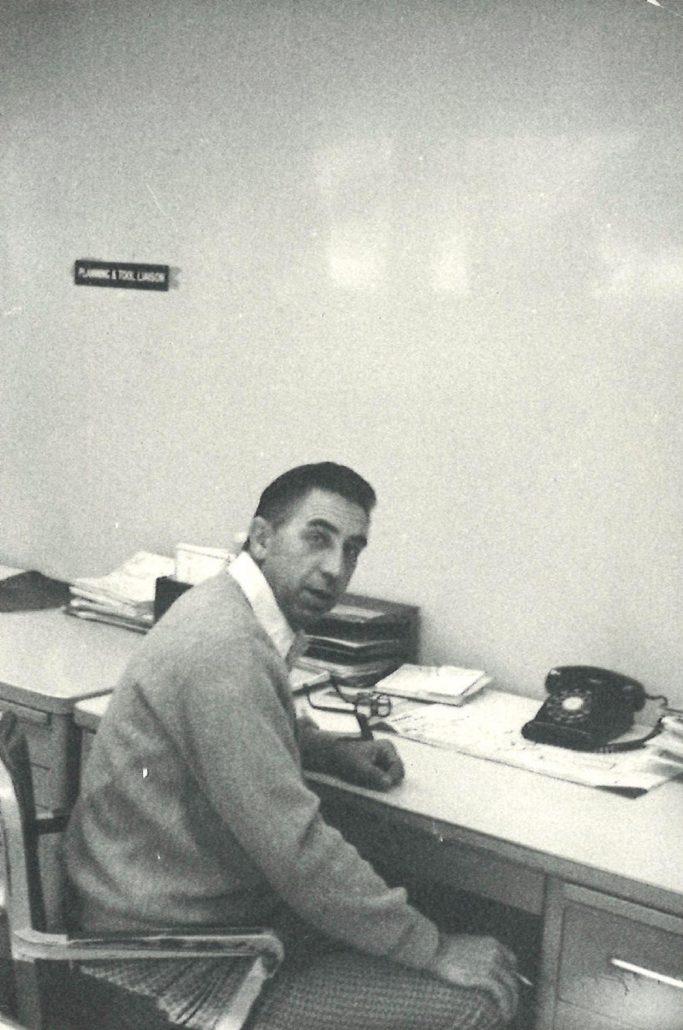 Over a series of phone calls and e-mails, I got to know more about John Dragich and his Zaba sports car.  John was born on Christmas Eve, December 24, 1927 in Seattle, Washington.  His family moved to San Pedro, California when he was very young and he lived spent the rest of his life in this community.  But he was hardly idle.

John liked to work with his hands.  He would observe what others were doing and then start building.  He liked watching and racing sailboat models and radio controlled gliders.  He would spend hundreds of hours building unique models and became very skilled at using them in air or water too (as appropriate).

He started his working as a teenager in the family’s fishing business – specifically on a fishing boat.  During this time, he also attended a trade school to learn more about building, servicing and running engines.  In his early 20s, the fishing industry declined and he was given an opportunity by his brother in-law to apply to Douglas Aircraft in Long Beach. 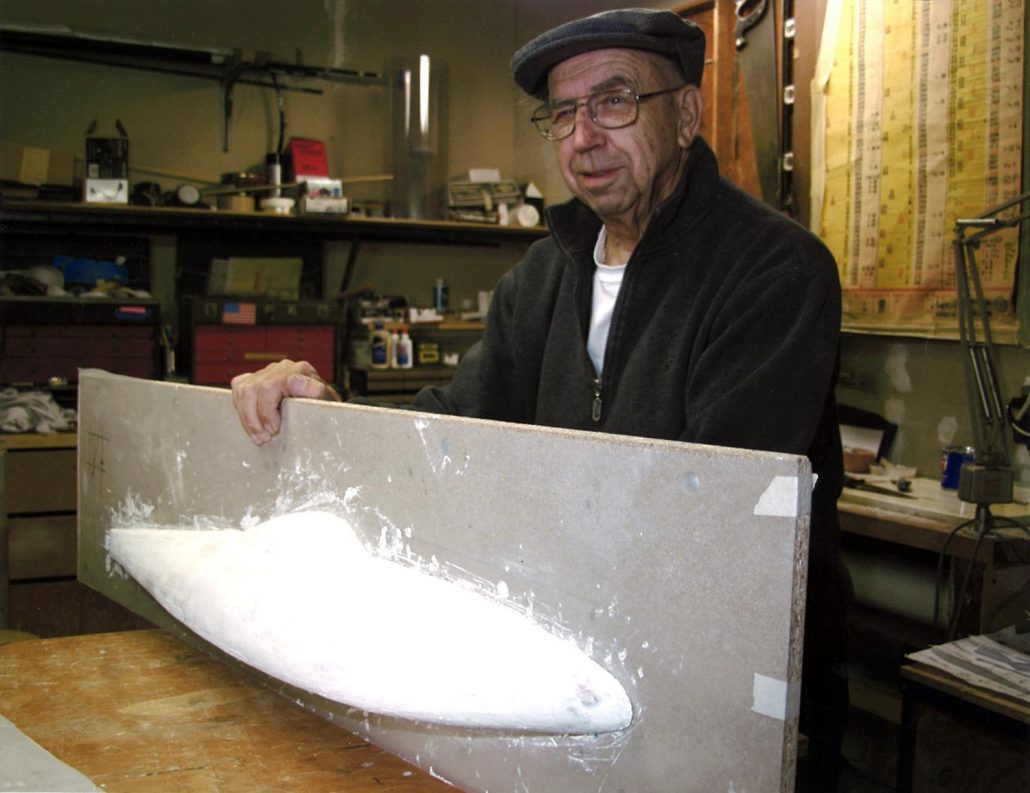 He was interviewed and quickly hired.  John worked his way up the company ladder for several decades and retired holding a managerial position in Douglass Aircraft.  Though he was in the management ranks, his true expertise was a soft-tool engineer and he continued to build models and use fiberglass extensively at Douglas to create molds and parts from the molds that were needed for the business.  But I digress – back to the car.

In the early 1950s, John was approaching his mid-20s and he had started working for in the Douglas Aircraft in the aerospace industry.  As was the industry at the time, fiberglass was an increasingly important material in the production of many aircraft parts and Douglas sent John to school to learn this craft. 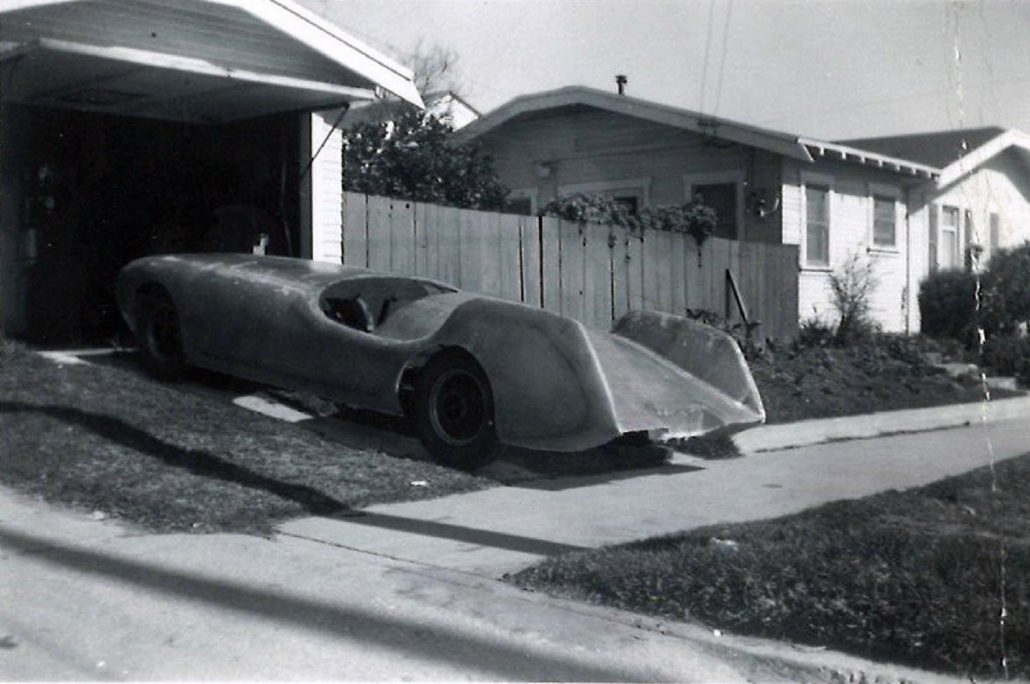 While the cars and bodies were built in downtown San Pedro, California, much of finish work occurred at John’s house on 22nd street in the same city.

Work Begins on the Zaba Special

In 1953, John and three other men – most likely co-workers or friends who worked in the industry – planned to build four fiberglass car bodies with an unusual agreement.  They would create a mold and build 4 bodies, but if any of them couldn’t finish building a car with the body – the body would have to be destroyed.  Interesting agreement.  The pressure must have worked because three cars were built and one body was reported destroyed.

The bodies and cars were mostly built in downtown San Pedro, California – this is near Long Beach and in the Los Angeles, California area.  When John built the car he did what most other guys did who built these cars – he used parts that were affordable and from all kinds of cars to finish both the interior and the exterior of the car. 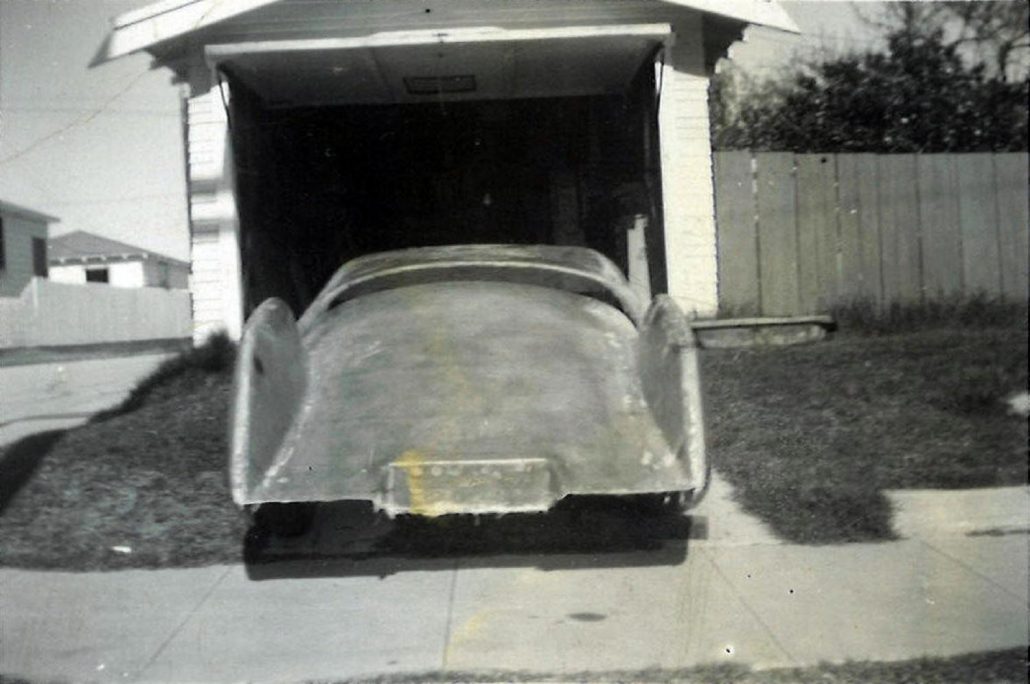 The high-styled fins at the rear of the car are reminiscent of a Spohn Custom Car built for American G.I.s in Germany. Very cool.

Anthony shared a family story about John and the car.  During the time that the car was being built, Look Magazine came by to learn more.  Fiberglass cars in the early 50s were very popular to show and write about and word had gotten around the community that a stylish sports car was being built in San Pedro, California.

However, Look Magazine must have been surprised by the result of their visit.  John was a private person and rebuffed attempts to do a story on the car.  He wanted his finished work – his car and/or any other projects that he would complete – to speak for themselves.  John never promoted his own work – he was a humble man.  But as Anthony relates, if you wanted to learn any skill from him, he would open his doors and share what he knew.  He would be there to help someone else learn how to be a success.

And by the way… the story about Look Magazine may be exactly right on.  Look Magazine published a story on the Glasspar fiberglass sports car on November 3, 1953 – right at the time John and his team were building these bodies and cars.  It’s a fun story and if you have the time, click here to review the story on Glasspar fiberglass sports car bodies. 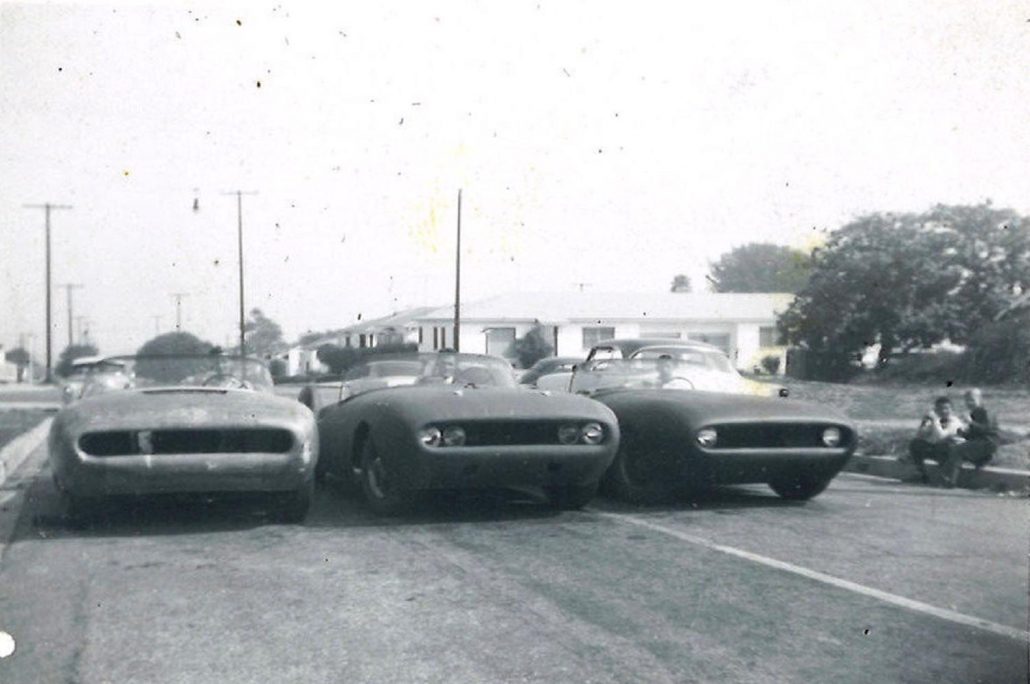 Of the three cars built, John’s car was the most fully completed – interior, exterior….his was completed and the family has photos showing the car in color taken in 1955 – most likely the year the car was finished.  It’s unknown who built the other 2 cars.  Perhaps this story will help us find these additional people.  As noted earlier, most likely they were friends or co-workers in the aerospace industry.  We also don’t know if each builder named their car differently or if all cars were called the “Zaba.”  For now, we’ll refer to all three cars as “Zaba Specials.” 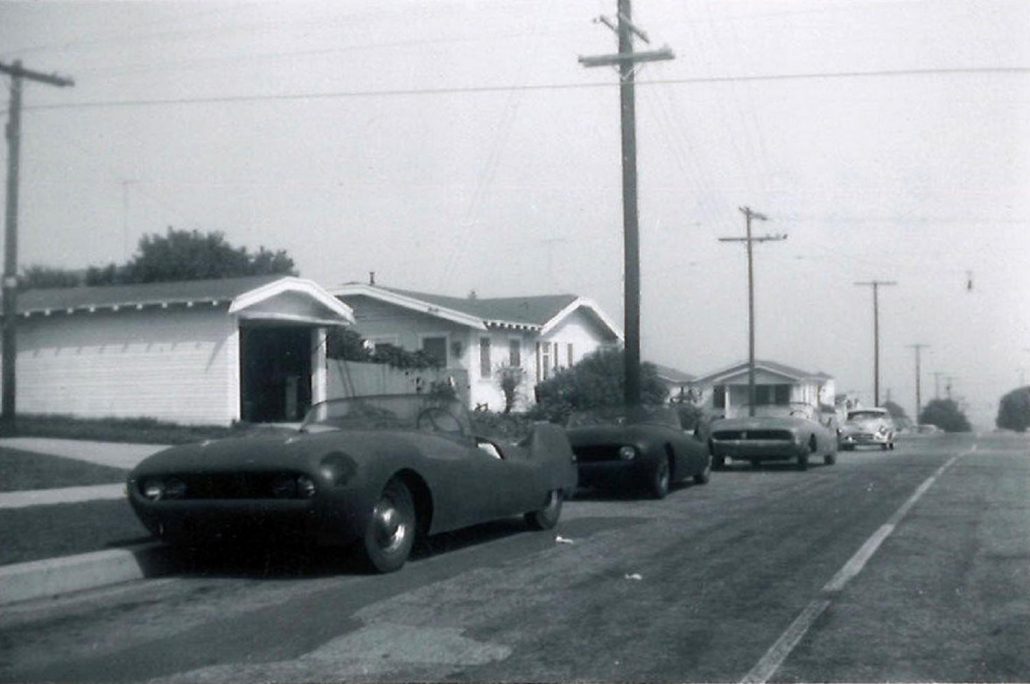 How The Car Was Built –
John’s car used a 1933 Ford chassis.  This old of a chassis isn’t as unusual as it seems.  It’s nearly the same as the Ford chassis’ thru 1948.  The difference is that most of the 1930’s Ford chassis would have had mechanical brakes.  It would have been an easy upgrade to install hydraulic or “juice” brakes on this special – everything would have just bolted in for the upgrade.  Of course a newer donor car often meant a larger engine – unless the engine was sourced elsewhere.

Anthony remembers that John used mostly Ford and Chevy parts for his build.  Most likely a Ford Flathead V8 engine would have been used too – but this cannot be confirmed.  It’s unknown how the other 2 cars were built.    Let’s check out some of the build “progress” photos taken as the car was being built.  In the photos below, the back part of the seat is not yet in place, nor is paint or other finishing details.  John is seen leaning against the rear fender of the Zaba below. 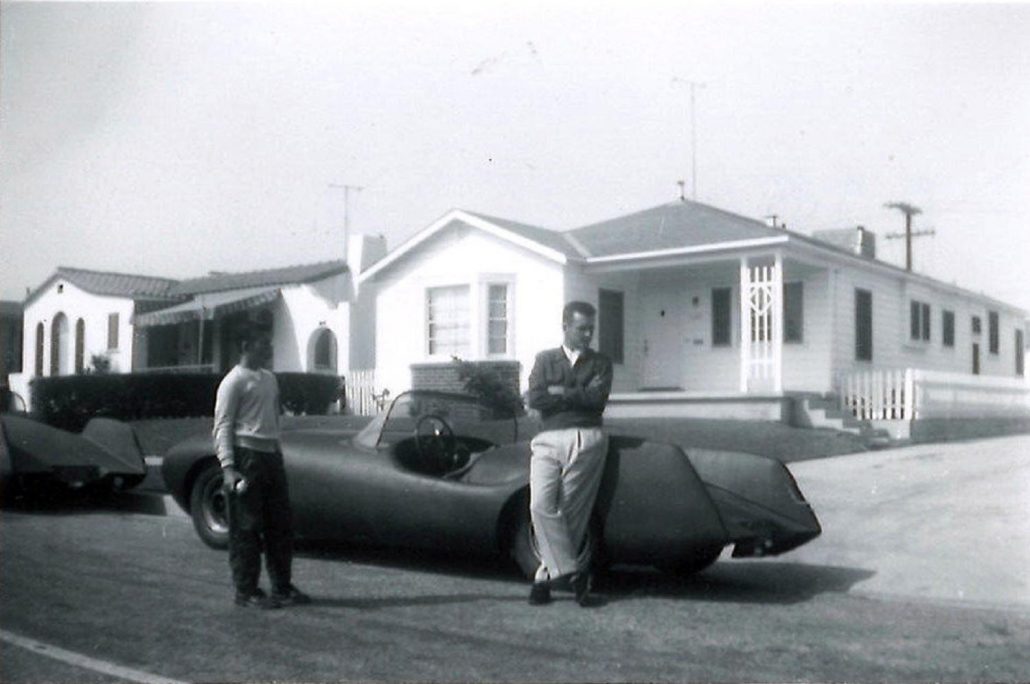 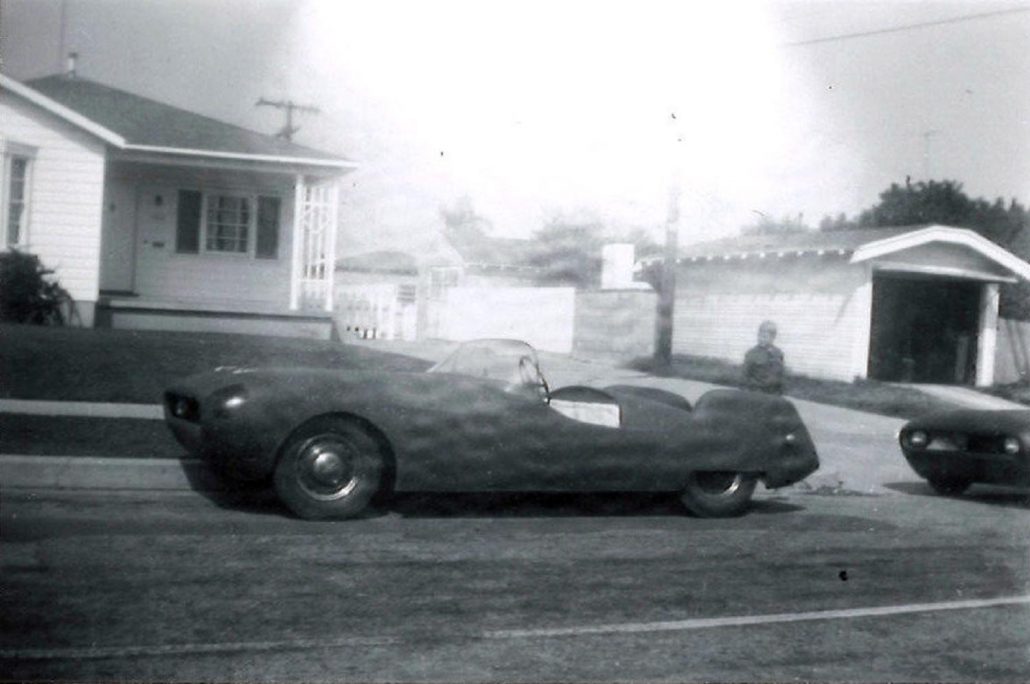 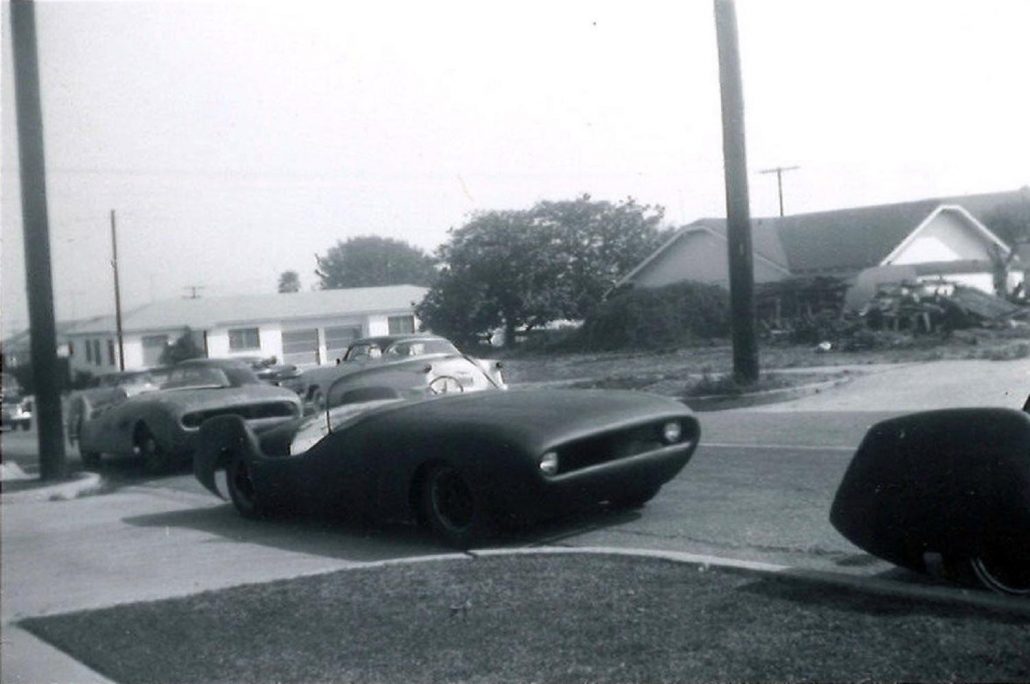 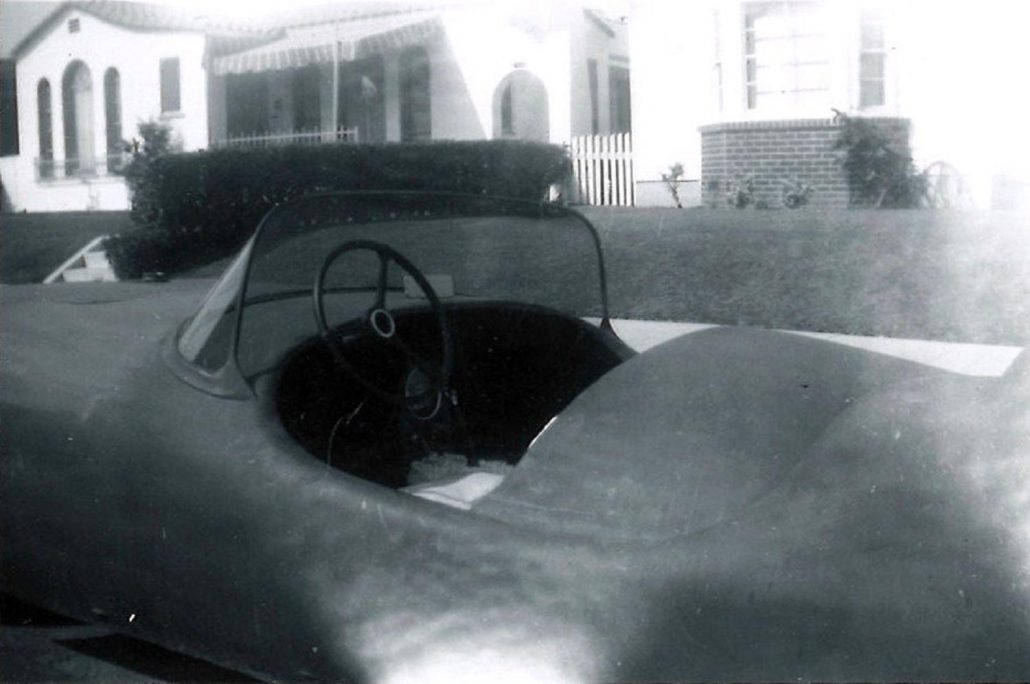 The photos below shows a different Zaba Special at a different point in the “build.”  If you look closely on some of these photos, you can see another “Zaba” ahead of this car. 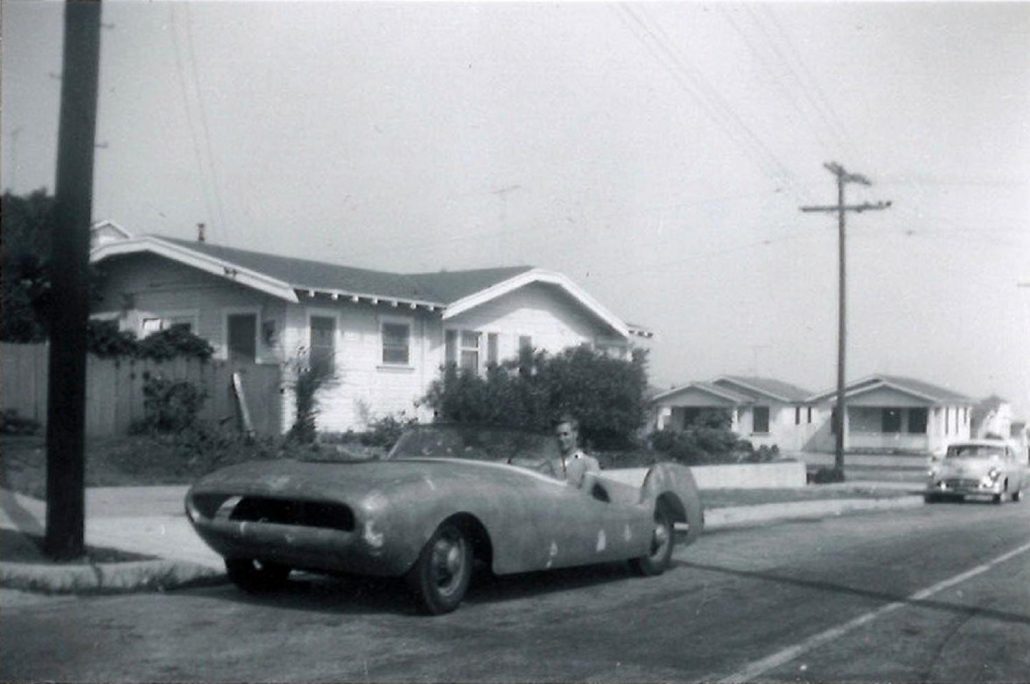 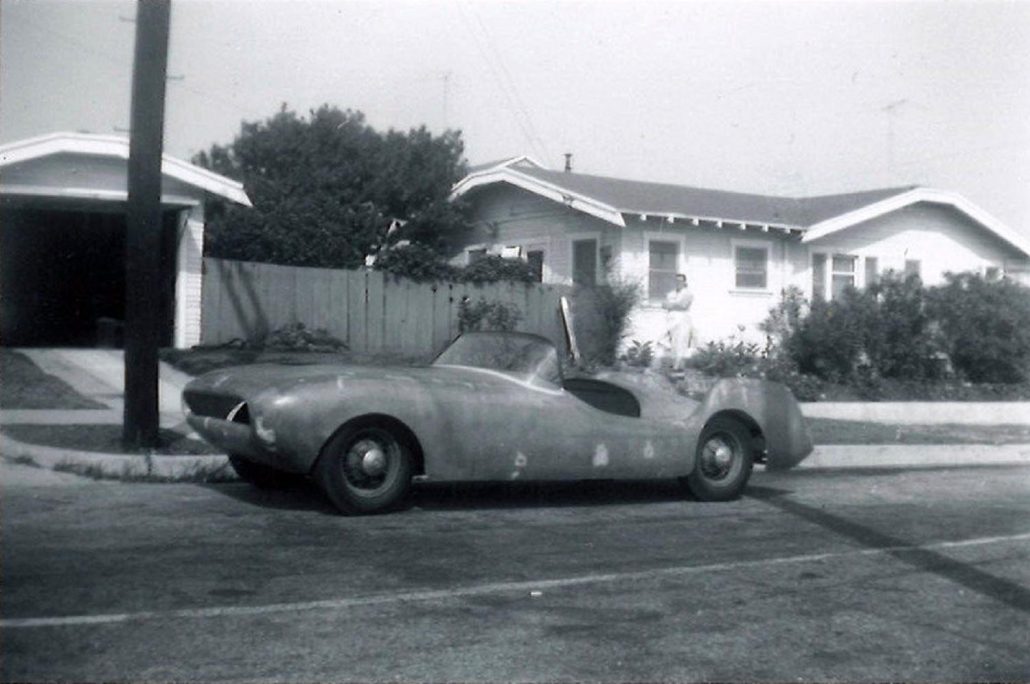 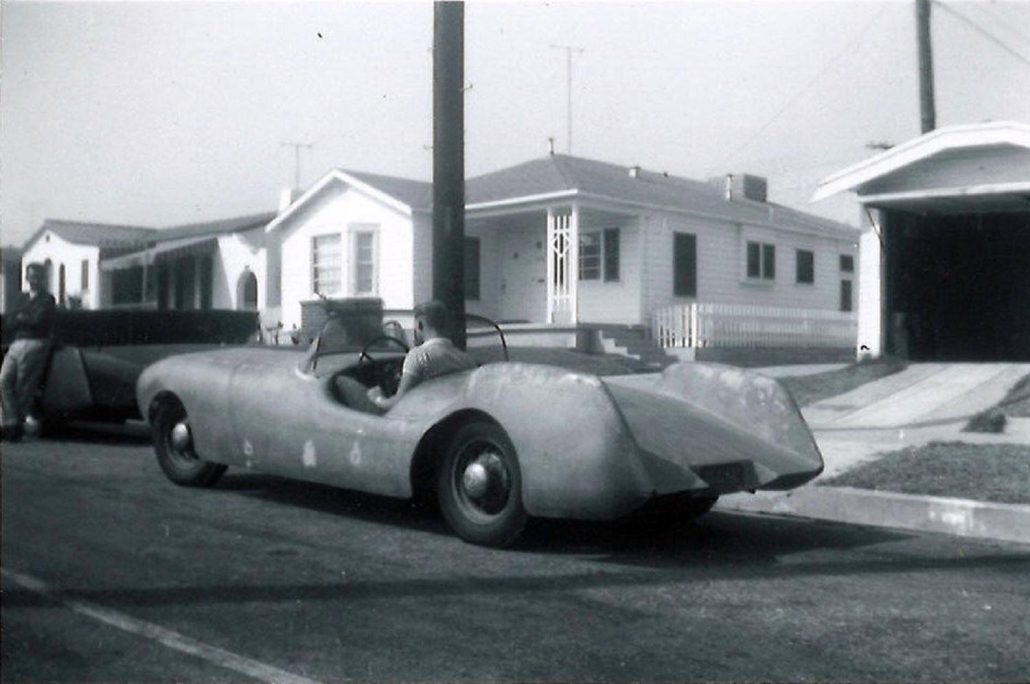 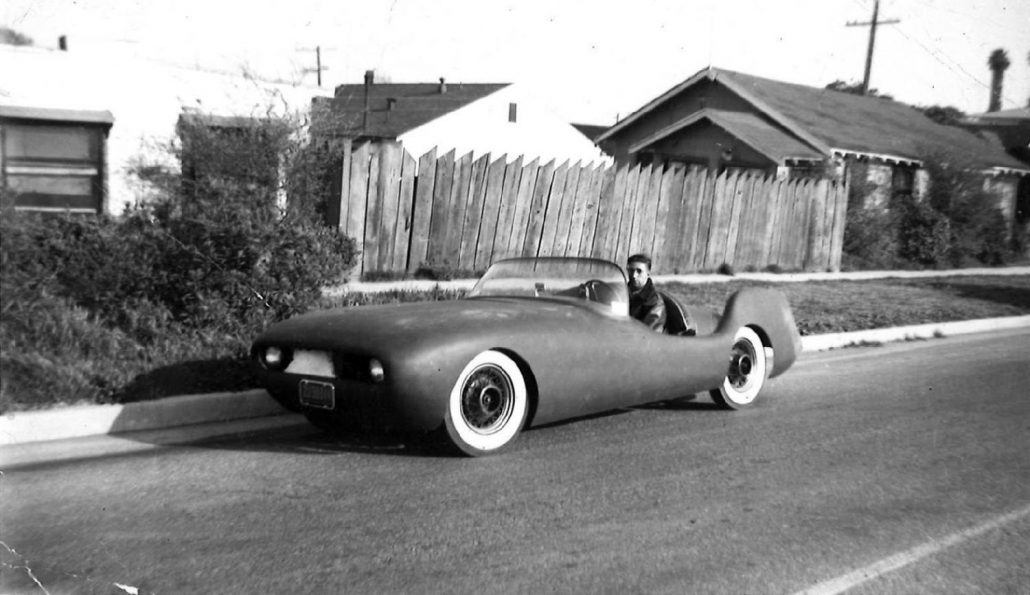 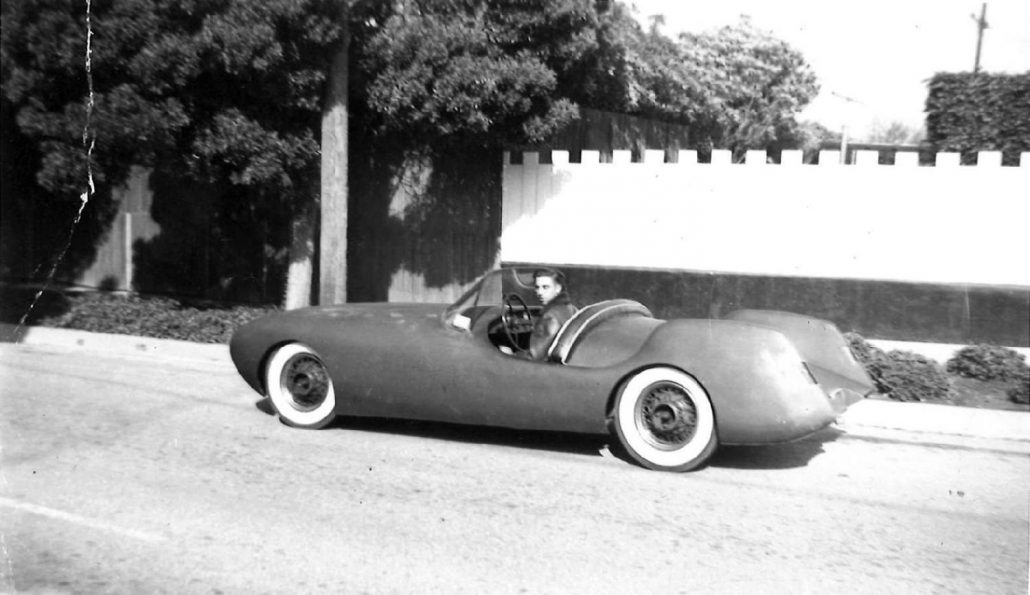 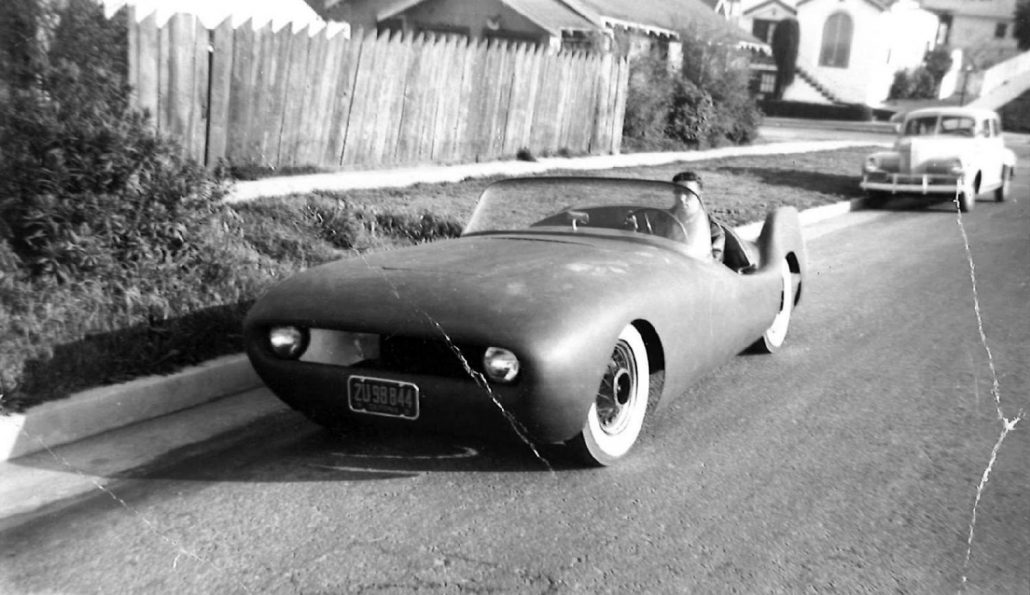 And finally two photos in color showing a date as well – we assume that the Zaba Special was started in 1953 and finished in 1955.

What Happened to the Zaba Special?

How Anthony Found Us

In 2014 after his uncle’s passing, Anthony wanted to see if he could learn more about what happened to his uncle’s car.  Most of his search was on the internet and he did find a clue – on Fred Roth’s website titled American Sports Cars (http://www.americansportscars.com/).  In an area of the website titled “Fiberglass Sports Kits”, he saw the following image:

Could it be?  Did the Zaba Special still exist?  You’ll have to wait until part 2 of the “Zaba Special” story to read the rest of story.

Hope you enjoyed the article, and remember…