As part of our first “Victress Weekend” of stories, let’s have a look at one of the first magazines to cover the record-breaking 200+ mile an hour run of the Guy Mabee Special.  This was covered in January, 1954 in Hot Rod Magazine.

The Streetliner
By Ray Brock
Photos by Rick, Medley, Brown
Looks and Performance Prompted a New Name For This Car 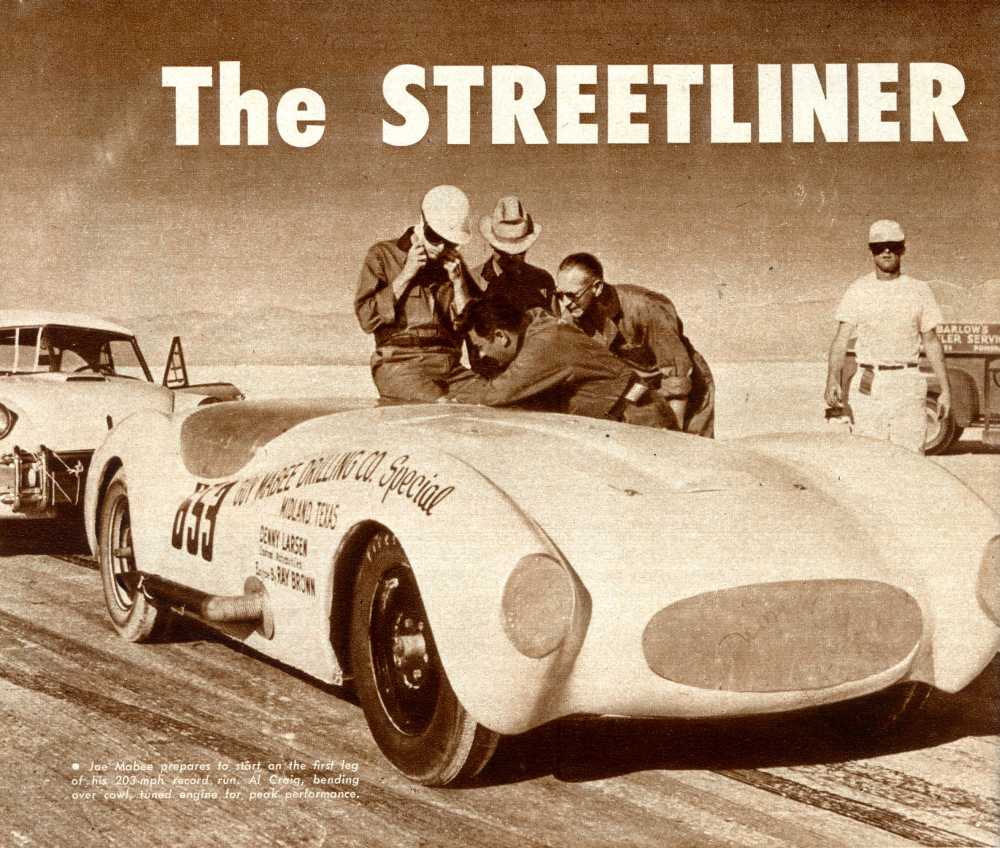 Is this the world’s fastest sport car?  Evidently it is, because we cannot find any records of another sport car exceeding 200 miles per hour.  During the 1953 Bonneville Nationals, Joe Mabee chauffeured the Guy Mabee Drilling Company Special through the timing lights for a 203.105 mph two-way average.

The chassis, which was built by Denny Larsen, is of chrome moly tubing.  It is very sturdily constructed, since Mabee also plans to use the car for road racing.  Kurtis torsion bar suspension is used both front and rear with trailing torsion and radius arms on the front similar to the 500-B Kurtis-Kraft Indianapolis cars. 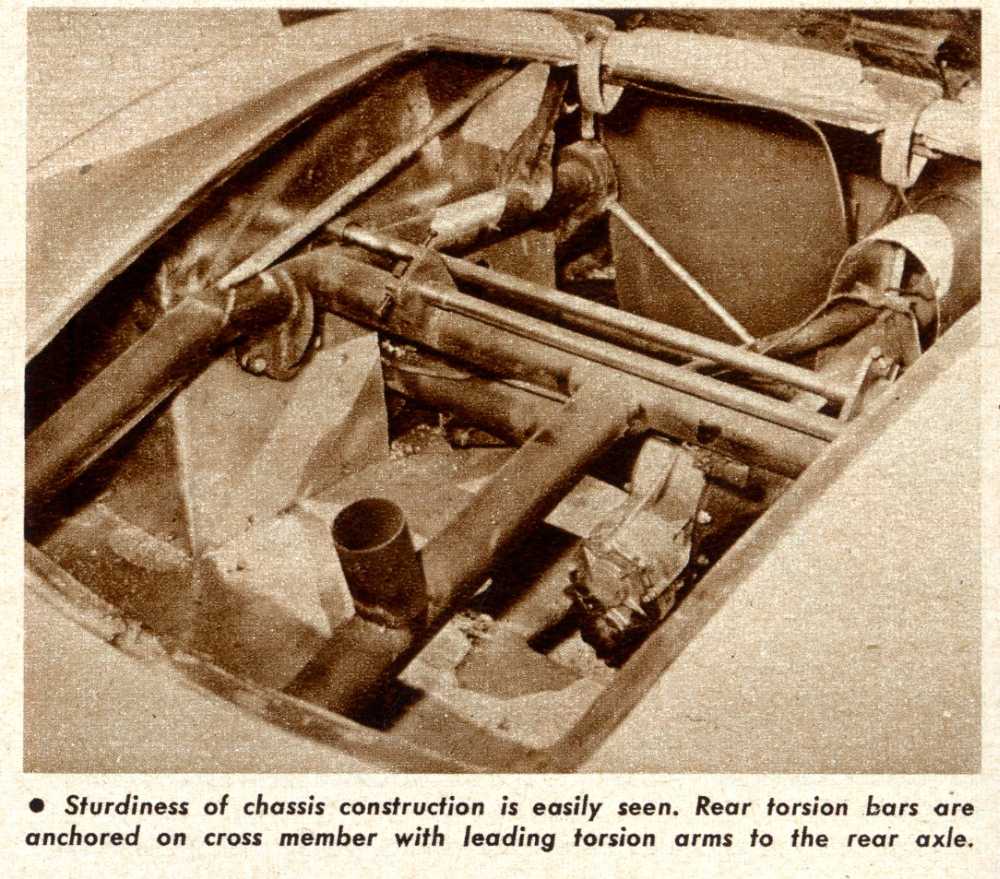 The front axle is the solid type used on ’47-’48 Fords as are the spindles, steering gear box and steering tie rod.  The rear torsion bar arrangement is also similar to the 500-B with the torsion bars paralleling each other along the rear cross member and having leading torsion arms.

A late Ford torque tube rear end is used with a 3.78:1 ring and pinion set in a Halibrand quick-change center section.  The rear radius rods anchor on the torque tube and a sway bar from the rear cross member to the rear axle housing prevents lateral movement.  50-50 Houdaille shock absorbers are used on each wheel. 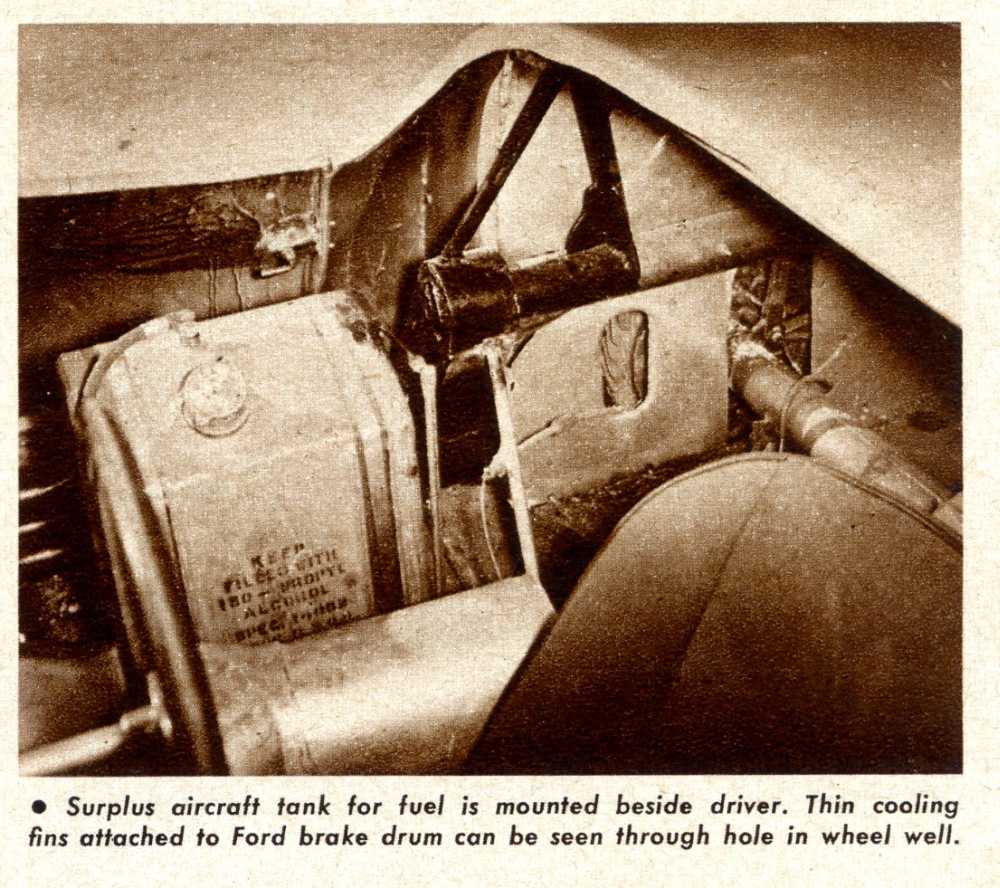 Sixteen-inch Ford wheels were used with 6.50×16 Indianapolis tires and no tire failures were encountered at Bonneville. The brakes are modified late Fords and have drums that are equipped with a large number of razor-thin cooling fins.  These drums were modified by sport car builder Chuck Manning who has used them with success on his own car.

A much modified Chrysler V8 supplies the horsepower for this car, and the credit for building such an outstanding performer goes to Ray Brown.  The engine was rebored to 3 15/16 inches and the stroke was left stock at 3 5/8 inches, with a displacement of 353 cubic inches.  Ignition is supplied by a Harmon and Collins magneto, intake valves are 1 7/8 inches, exhaust valves 1 5/8 inches, heads are ported, and a Chet Herbert roller tappet RPM grind cam is used. 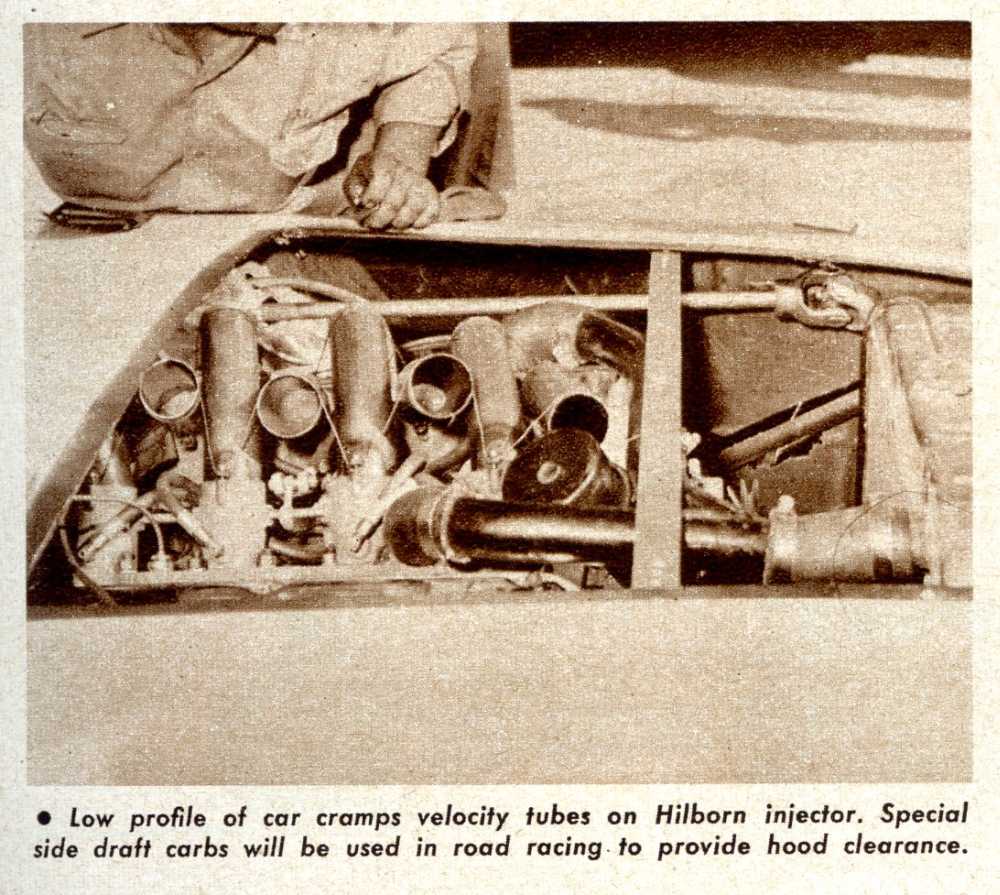 The pistons used at Bonneville were 11 ½ to 1 compression but 9 ½ to 1 pistons will be installed so that gasoline can be used in road races.  A Hilborn injector was also used at Bonneville for distributing the alcohol fuel but it will be replaced with a Cunningham four-carburetor manifold and four Carter YAH carburetors for road racing.  The exhaust gases are collected by Belong “W” type headers which empty into two exhaust pipes of three inch diameter.

The body for Mabee’s sport car is a Victress fiberglass roadster, which was built in North Hollywood, California and has body lines approaching the streamliner class.  Because of the streamlining and performance displayed by a car built primarily to operate on the road, it is very easy to understand why observers nicknamed this car the “Streetliner.” 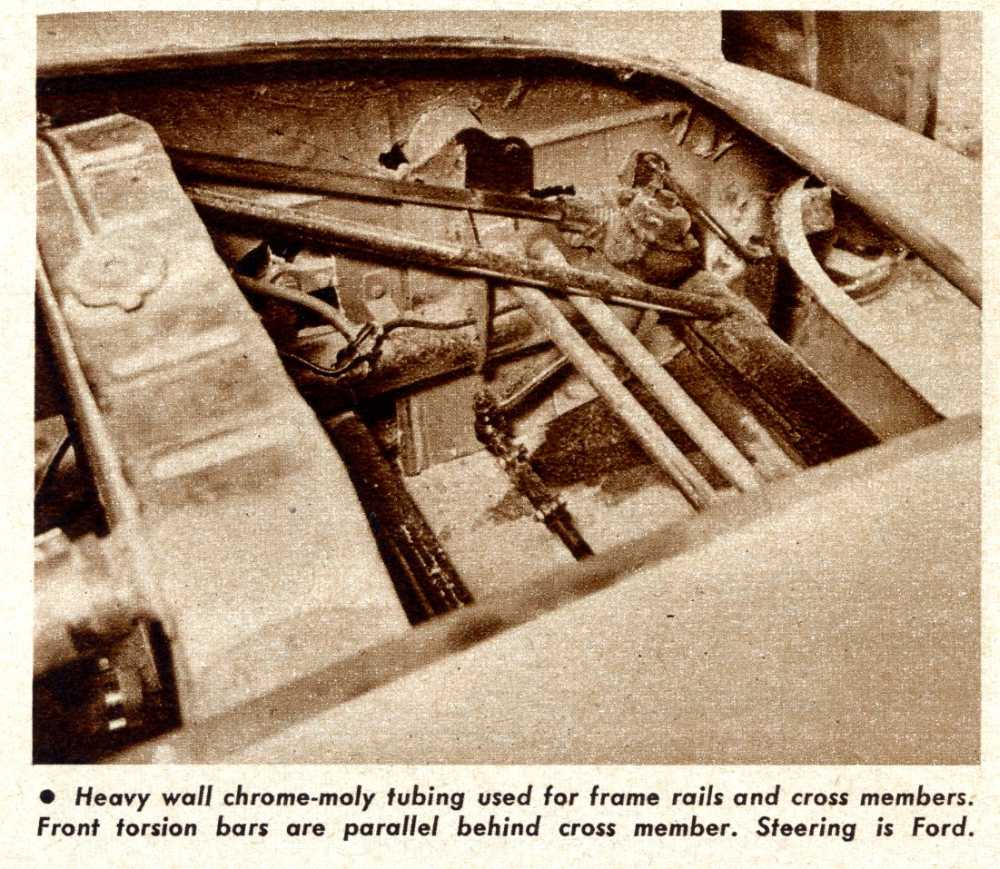 It’s great fun to share articles like this on such exciting cars built by a competent team of individuals.  And it’s quite impressive to consider what they accomplished back in August, 1953.

For those of you who will be at Carlisle in just a few weeks to see the Guy Mabee Victress Special in person, be sure to ask Jim and Lea Ann Robinson about the safety equipment on-board the Mabee Special during the run in ’53.  It’s a story you won’t soon forget 🙂

Our next Victress story will appear tomorrow so stay tuned to your favorite fiber-channel gang….. 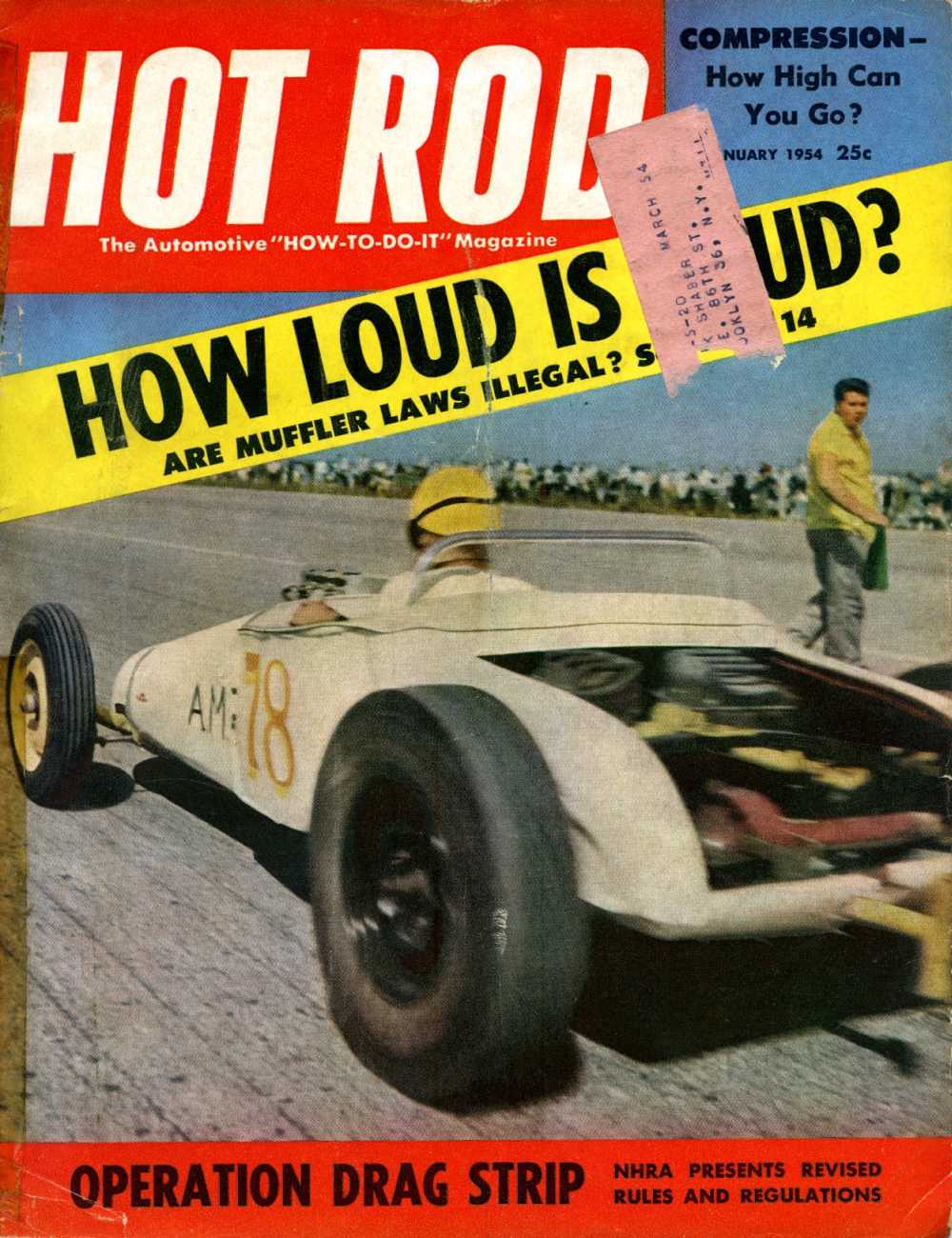 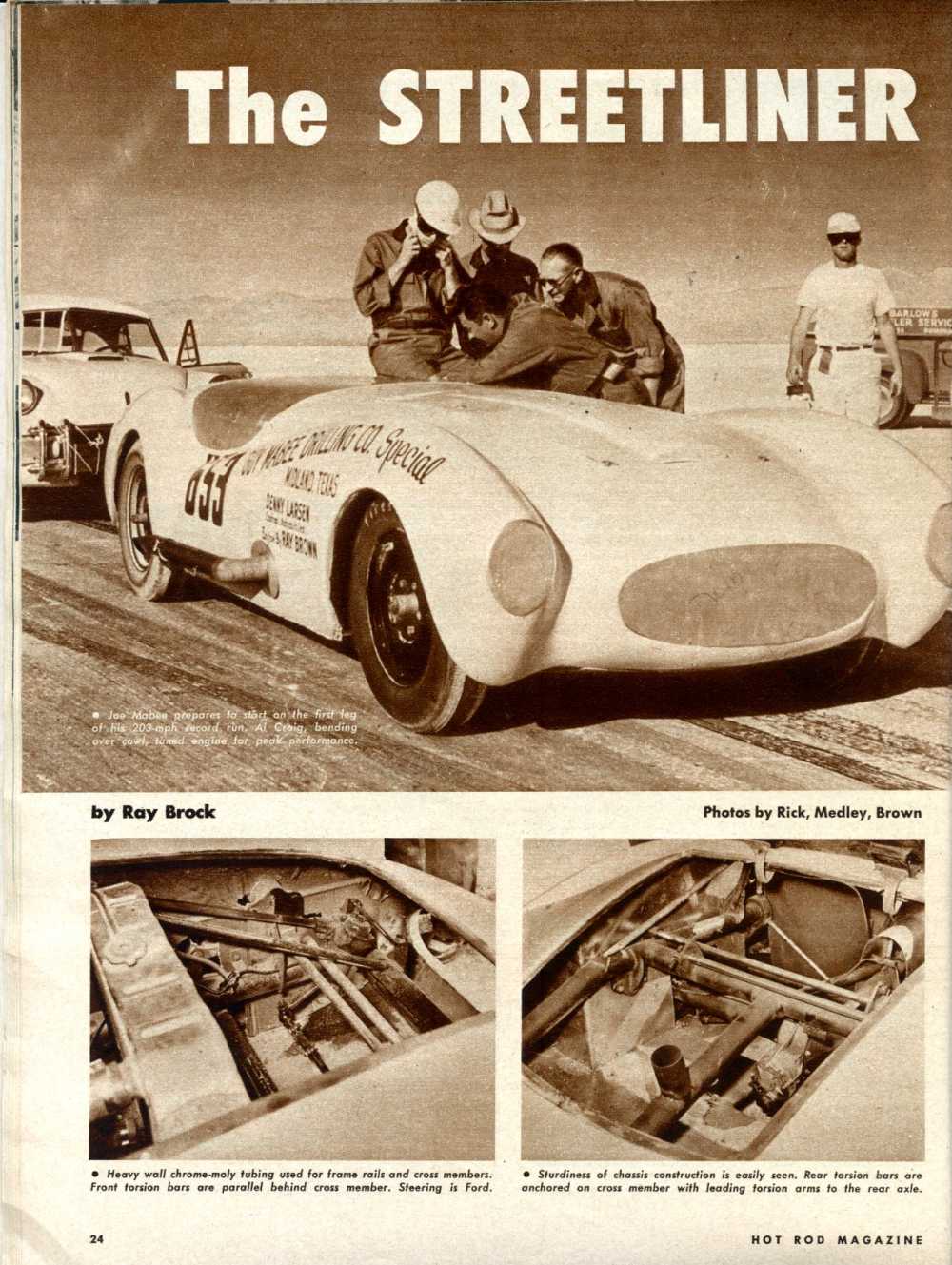 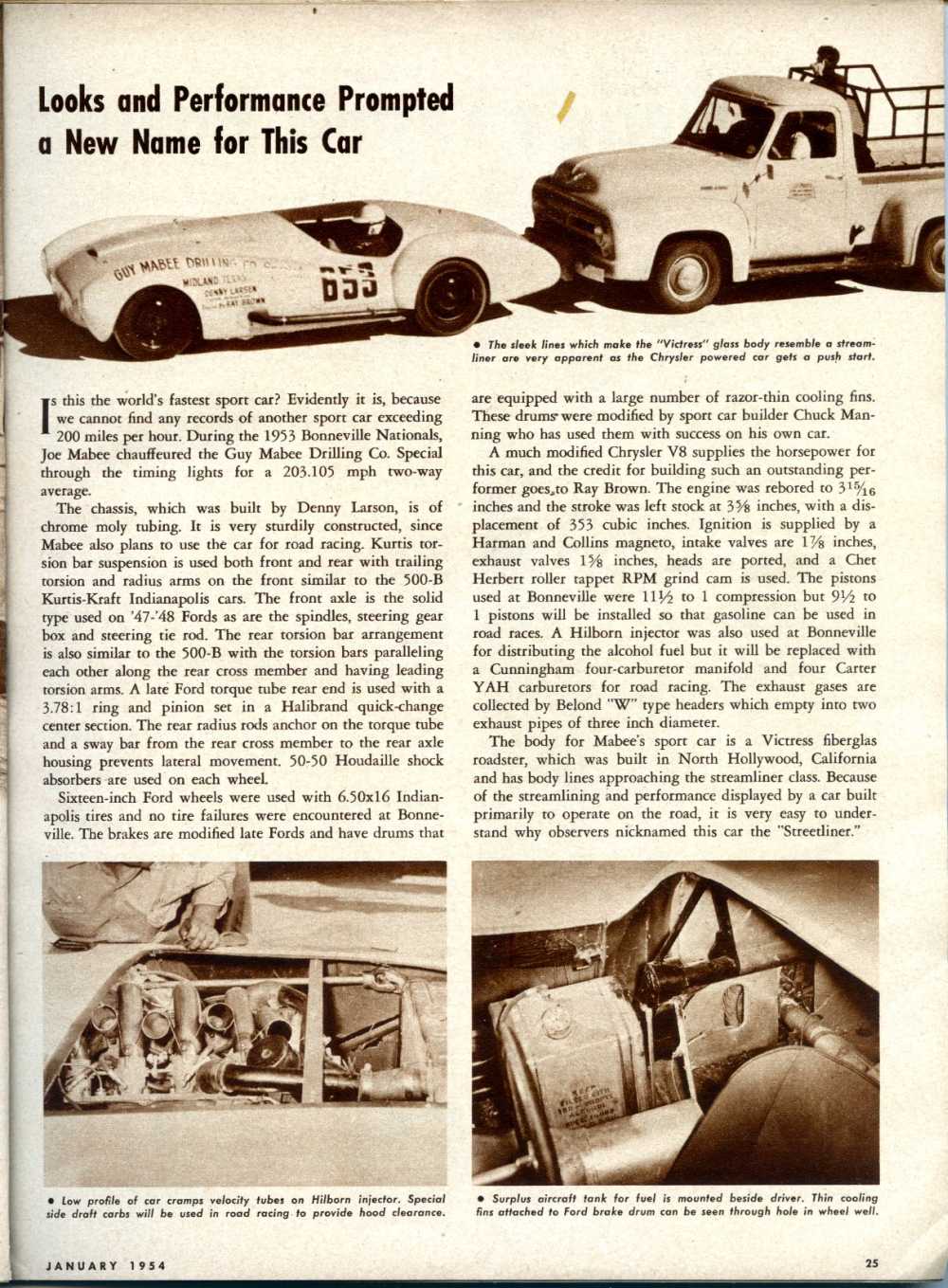