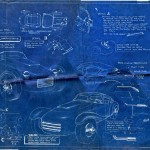 Here is Noel’s Poster / Blueprint For His First Car – “The Stag.” The Blueprint Was a Testimony To His Creativity, Vision, and Skill.

I’ve talked about Noel Bangert (later in life he changed his name to Noel Marshall) in previous stories (click here to read about Noel Bangert and his cars), and was fortunate to get to know him before his passing late last year.  As Rick D’Louhy and I continue our research into Forgotten Fiberglass cars, one thing we establish is the oldest – and newest – documented reference to each car.

Noel emerged on the automotive scene in March 1954 in an article that appeared in Hop-up / Motor Life Magazine.  His first car was advertised in the same issue too.  Let’s take a look at what the article had to say about Noel’s car:

An inexpensive, functional fiberglass body suitable for sports or street use is being produced in Los Angeles by Bangert Enterprises.  According to Noel Bangert, who designed the unit, total weight has been limited to 95 pounds.  This has been achieved, he said, through use of a continuous curve in forming the contours of the shell.

Bangert said the versatility of the body is demonstrated by the fact that it can be accommodated on a frame of anywhere from 98 to 118 inches.  The only components which he furnishes, in addition to the body, are the fenders – either bicycle or clamshell type – and the plastic top.  A rectangular recessed opening has been left at the front for installation of any type of grille.

The project began originally when Bangert bought a $5 kit from Hollywood Plastic Products.  His energy and skill resulted in the production of the car, which he calls “The Stag.”  His first step was a plaster model which, after study, was sliced into sections.  These were transferred to the drafting board where the curves were perfected. 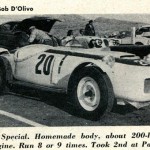 The Most Famous Race Car That Utilized The “Stag” Bangert Body Is The Baldwin Mark II – Driven Here By Bill Pollack. This Photo Appeared in The April 1955 Issue of Motor Trend.

Aluminum templates were fashioned next and used to form the female mold by supporting, along with wire mesh, the plaster-soaked burlap.  The male mold was built up and then a female mold created from it, in much similar way.  From the female mold, the finished car made of alternate layers of mat and glass cloth impregnated with resin, was built.

Bangert feels he has something special to offer.

He recognizes the desire of the individual car builder to rework a standard body shape into something special.  So his fiberglass body has been designed with this in mind.  Plenty of areas have been left, such as grille, bumpers, windshield treatment, and so forth to give the car builder ample points in which to express the original ideas he may wish to incorporate.

During my interviews with Noel in 2007-2010, he mentioned that each of the 3 models of cars he designed and built – evolved over time..  That is, the “Stag” was the basis for the next model which was the “Manta Ray,” and this yet evolved into the basis of his third “Ferrari inspired” design which (as far as we can tell and he remembered…) was unnamed.

One of the reasons that Noel’s last car was unnamed may have been a philosophy he held at the time when building these cars.  He felt that the body should be customized and tailored by each individual buyer to make it “his” or “her” car.  Noel saw his bodies as the starting point, and promoted alterations to his design.  He discussed this “buyer/builder customization” idea in the article above, during my interviews with him from 2007 – 2010, and in a series of 3 posters he did – the first of which we’ll review next.

I asked Noel about his inspiration for the design of the “Stag.”  He was quick with his answer:

“I loved the look and excitement of the Indianapolis 500 race cars at the time.  I thought someone should take that design and make it “streetable” and that was the basis of my first car.  It was intended to mimic the fuselage style bodies of racecars, yet give customers the opportunity to modify the body and make it suitable to their liking.  And most of all, it was designed to be fun!” 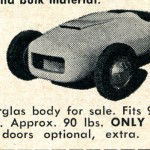 Noel told me that he didn’t do brochures – he did blueprints and posters.

Of course he didn’t have any when I met him, but he told me he did at least 2 different versions (it turned out to be 3 or more) and he’d love copies if I ever found them.  Well…after much searching I did find them, and most recently came across his first poster – of the Bangert “Stag.”

All of Noel’s posters are fascinating insights into building your own sports car in the 1950’s.  Noel really did mean that he wanted customers who purchased his Bangert bodies to customize them to their heart’s content.  To that end, he gave them many different approaches to both building their car and then customizing it – in each of his posters.

In his first poster which focused on the “Stag”, several different grille treatments are shown, different fender configurations are suggested, different hood approaches for design are outlined, and he even showed how you could create and build a hardtop for his Stag Roadster body.

Noel was one talented guy! 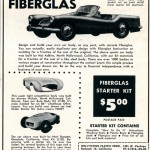 The earliest advertising we can find from Bangert himself was in 1955.  But this was not the earliest advertisement that appeared for his cars.  Noel was a keen businessman, and a very likable guy (this was evident from the many people we interviewed from that era who had positive and fun things to share about Noel.)  He quickly began building relationships within the business to the mutual benefit of everyone involved.

Back on June 10th, 2009 I had the opportunity to interview Gerry Huth of muffler fame from the 1940’s and 1950’s.  (Click here to learn more about how I first got interested in talking with Gerry).  It turns out he didn’t just start out owning “Huth Mufflers.”  He also started “Hollywood Plastics” with Bill Campbell in the early 1950’s.  After about 1-2 years, Bill’s brother Bobby wanted to become part of Hollywood Plastics and expand the company to sell boats.  So instead of having 3 owners, Gerry offered to sell his share of the company for $1 to Bobby.  Bill and Bobby Campbell continued to expand Hollywood Plastics, and even produced a few cars.  We’ll discuss this company in a future story.

Later that year (August 1954), their advertisements gave more detail about the “Stag.”  However, the content switched from buying bodies from Hollywood Plastics, to promoting Bangert’s own business selling bodies.  They wanted to focus on what customers could accomplish with their product – and promote sales for their friend Noel, as well.  Here’s the ad copy:

“The car above was built by Noel Bangert, Glendale, California, from Kit #120.  Beginning with a starter kit, he now has orders for several bodies of this type and a growing business.  Be the first in your town to learn the fabulous fiberglass business.  It’s easy with our complete, simplified instruction course included in our Starter Kit.”

Noel was on his way with his first car, free advertising, and building a successful fiberglass car business.  Way to go Noel!!! 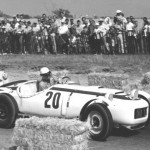 I’ve never seen a Stag body, and originally thought none had survived.  Noel quickly corrected me during our interviews.  “Geoff…” he said….”What about the Baldwin racecar?”

Off Geoff and Rick went on another research adventure.

“Willis Baldwin…constructed the Baldwin Mark II in 1955.  The car wore cycle fenders and was powered by a flathead Ford.  The Mark II had a distinctive front end with a square opening without a grille and two hood scoops.  The unique hood scoop arrangement allowed for the use of two radiators, which Baldwin believed would cut down on the car’s frontal area and improve performance.  The second radiator was set behind and above the first and necessitated the second hood scoop.”

Great information here, and I continued looking for more.  I then found additional information on Tam’s Old Race Car Site:  Click here to review information on the Baldwin racecar:  http://www.tamsoldracecarsite.net/BaldwinSpecial3.html

And finally, I found a story that showcased the Baldwin Mark II with the Bangert Stag body in the April 1955 issue of Motor Trend.  There are some great shots of driver Bill Pollack (friend of Forgotten Fiberglass) and owner Ken Simpson.  Be sure to check out the story in the gallery of pictures below.

I’m pleased to say that one of the Baldwin race cars survives today.  Perhaps this will lead to finding the Baldwin Mark II with the Bangert Stag body.  What a find that would be!

Noel Bangert (Marshall) was a pretty special guy.  Creative, innovative, hard-working, and charismatic.  I’ll have quite a bit more information to share in the next few months about Noel, his cars, his vision, and his life.

Note: 2/15/2011: I heard from Peter McKercher, Singer Historian, and he had the following to add about Noel Bangert’s first car:  “Geoff…  In your Bangert story, you talk about the Baldwin Special having been constructed in 1955. I am quite certain that the picture you show of it racing was at Torrey Pines, the 1st weekend in July 1954. The track looks like Torrey Pines, rather than Palm Springs, as Tam McPartland has labelled it and the race programme for the event lists it as #20 owned by Ken Simpson and driven by Bill Pollack that week end (see attached). Tam’s photos also indicate that Baldwin won the main event in this car at Willow Springs on Feb. 13, 1955, so it seems unlikely that the car was constructed in ’55 as Harold Pace has suggested. I’m sure both the shots Tam has labelled as Palm Springs are Torrey Pines.  Just to confuse matters, the Baldwin special also ran at Palm springs as #20 March 26-27.However, I still feel the venue of your picture is Torrey Pines.  The tracks are very distinctive. Palm Springs is in the Desert. Very flat with Mountains in the background and Torrey pines is a bluff over the ocean with an undulating track.  Peter” 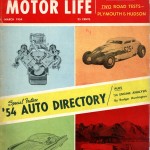 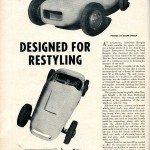 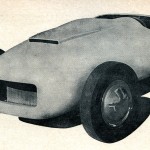 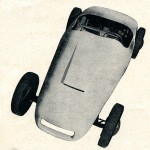 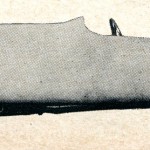 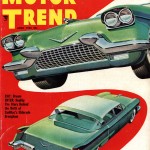 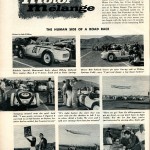 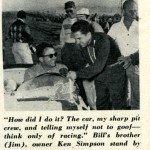 Here The Most Famous Race Car That Utilized This Body Is Shown – The Baldwin Mark II Driven Here By Bill Pollack. This Photo Appeared in The April 1955 Issue of Motor Trend. 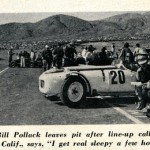 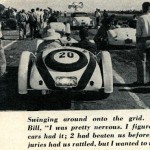 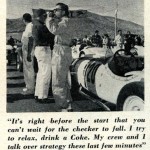 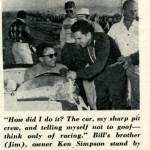 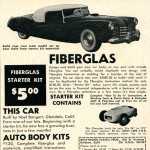 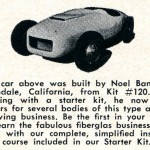 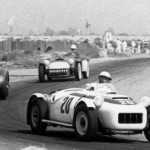 Here’s Noel’s Poster / Blueprint For His First Car – “The Stag.” The Blueprint Was a Testimony To His Creativity, Vision, and Skill. 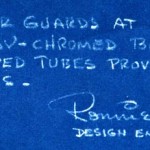 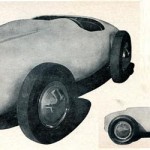