New discoveries are being made all the time in the land of “vintage fiberglass,” and this one was made by Frank Cornell – Historian Emeritus for Woodill Wildfire.

Frank has had an interest in Wildfires since the 1970’s and maybe even earlier.  I first met Frank soon after our research began for “Forgotten Fiberglass.”  This was around 2007.  Frank has since schooled me in the history he learned directly from Woody himself and Woody’s right hand man – Howard Miller.   Frank is one of the best resources on the history and legacy of the Woodill Wildfire marque.

Last week, Frank wrote to me with exciting news.  He had found vintage models of the Woodill Wildfire, and these were the rare “Series 1” Wildfires – the ones with modified Glasspar G2 bodies.  What a great discovery!   Let’s allow Frank to tell the rest of the story. 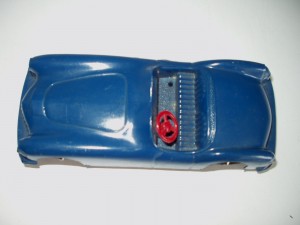 From Above, You Can See The Glasspar Grille, Added “Woodill” Hoodscoop, and Wildfire Taillights. Great Find Frank!

From The Desk Of Frank Cornell:

Another discovery, another mystery.

I have found two examples of the first toy ( to my knowledge ) of a Woodill Wildfire, and it happens to be a Series 1 body style.  The attached photographs show the model, which is 7″ (18cm) long, cast metal. There are no manufacturers markings on the casting.

There are slight differences between the two: One has a silver cast metal steering wheel, the other a red plastic wheel.

The blue paint is a slightly different shade. Both appear to be as originally produced, including the paint. Construction is typical of dime store toys of the late fifties. One car has plain tires, the other has tires marked “Louis Marx & Co Made in USA” on the sidewalls.

Marx was a well known toy company, but I have collected toys for a long time and had never seen these before. Some Marx toy cars were sold individually, others came as cargo on auto transport trucks or railroad cars. If anyone has more information, please let us know.

Meanwhile, I’ll be researching if there were other colors, or whether it could also have been released in a plastic version.

What interesting news about Wildfires from Frank Cornell.

He’s made many discoveries about Wildfires in the past (including cars).  Frank has also provided a great many insights into Woodill for all enthusiasts for over 30 years and going strong.  We owe a debt of gratitude for Frank’s Woodill Wildfire knowledge, experience, and expertise.  And I’m sure these discoveries will continue to occur as long as Frank is on the trail.

Keep us posted Frank!  We look forward to your next contact and/or what you may find that’s new out there. 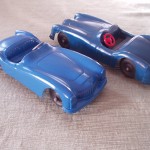 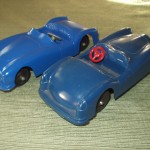 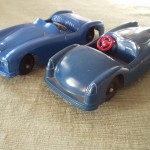 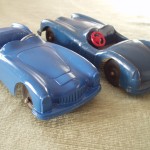 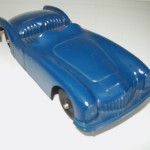 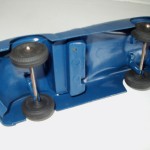 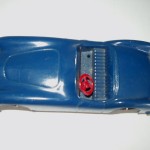 From Above, You Can See The Glasspar Grille, Added “Woodill” Hoodscoop, and Wildfire Taillights. Great Find Frank! 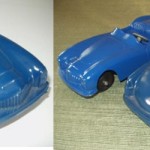