The earliest known replica of a Cord that I’m aware of was done by – who else – the legendary Glenn Pray of Tulsa, Oklahoma.  Here’s a bit more about the man and his story from the website http://www.glennpray.com/:

“Glenn Pray. Who is Glenn Pray? (From http://www.glennpray.com/):

What had he (Glenn Pray) accomplished by the summer of 1963 that made him famous enough to be considered a who’s who in America and a contestant on this very popular game show?  What was his claim to fame?   Who was he then and who is he now? The world would later learn that this young entrepreneur with sheer determination and a borrowed 20 dollar bill bought the Auburn-Cord-Duesenberg Company and began manufacturing the “second generation” Cord and Auburn automobiles.

Little did the world know the enormity of his genius.  Despite enormous obstacles, he would rise to the top of his profession. He would link up with US. Rubber and create the first therma plastic car ever made in the world.  His Cord 8/10’s would be the very first American car designed and produced with front wheel drive after WWII. He would arguably be the first person to design an “office on wheels” …the first mini van.

He would be the first to design, patent and create the Auburn dual cowl phaeton automobile…(a highly collectible model to this day).  His company, the Auburn-Cord-Dusenberg company also has the profound distinction of being the oldest car manufacturing company still in business to this date in American history. More over, he would become known throughout the country as the “Will Rogers” and “Mark Twain” of the automobile industry…a much sought after motivational speaker and gifted story teller.  Glenn Pray’s audience could not get enough of his plain spoken humor.”

Glenn was quite the man, and I wish I would have been able to meet with him in person.  Sadly, he passed away earlier this year (2011), but his legend and what he accomplished continues to be recognized to this day.

Recently, automotive historian Glenn Brummer alerted me to an ebay auction showing the press release of what I believe is the first “plastic” (not fiberglass) production car built in America, I seized the opportunity, and became the high bidder for this piece of history.  Here’s what I learned when the photo and press release arrived: 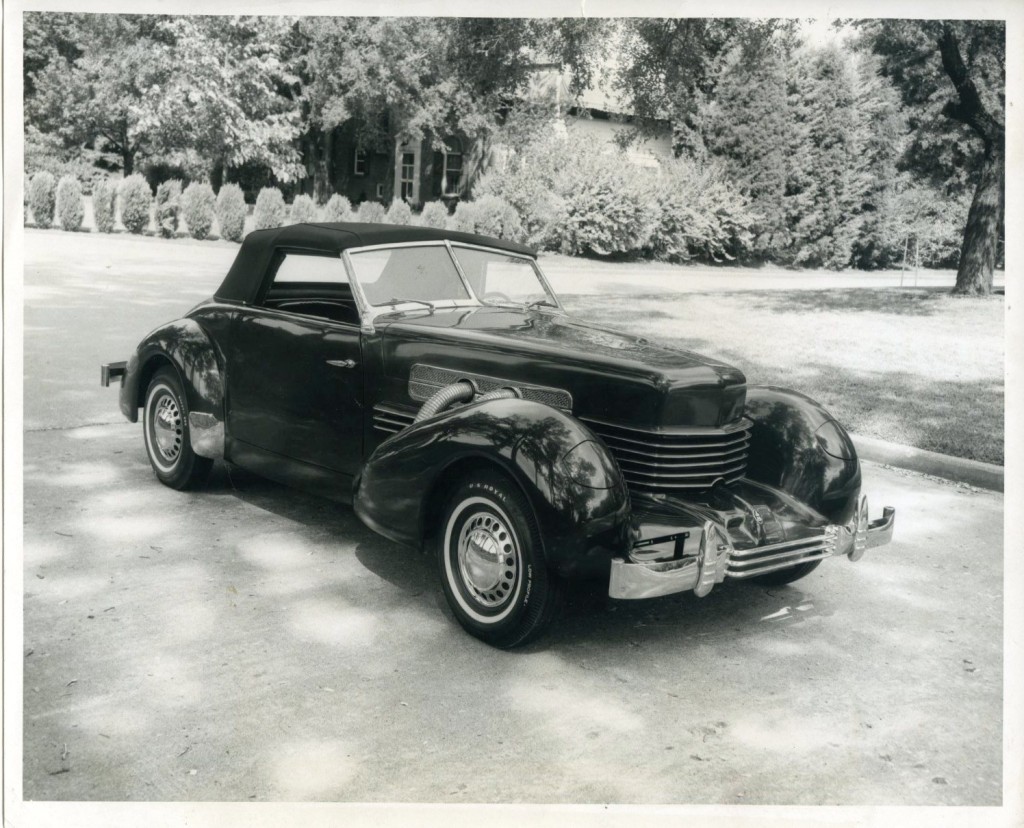 The first Cord built in 28 years shows that styling lines like those used on the 1937 Cord 810 are just as up-to-date in 1964.  The Cord Sportsman – which had its public unveiling last month in Tulsa – has a unique body made of Expanded Royalite, a thermoplastic material manufactured by United States Rubber Company.

It is extremely difficult to dent and dents can be removed by an industrial heat gun.  Expanded Royalite also is resistant to corrosion from salts, oils, and greases and has tooling costs about one to three percent those of steel.

The Cord is being manufactured by the Cord Automobile Company of Tulsa.  One hundred cars are being made to be sold for market testing and then production will be set up according to orders.  No dealership program is planned at present and all orders must be sent directly to the Cord Company. 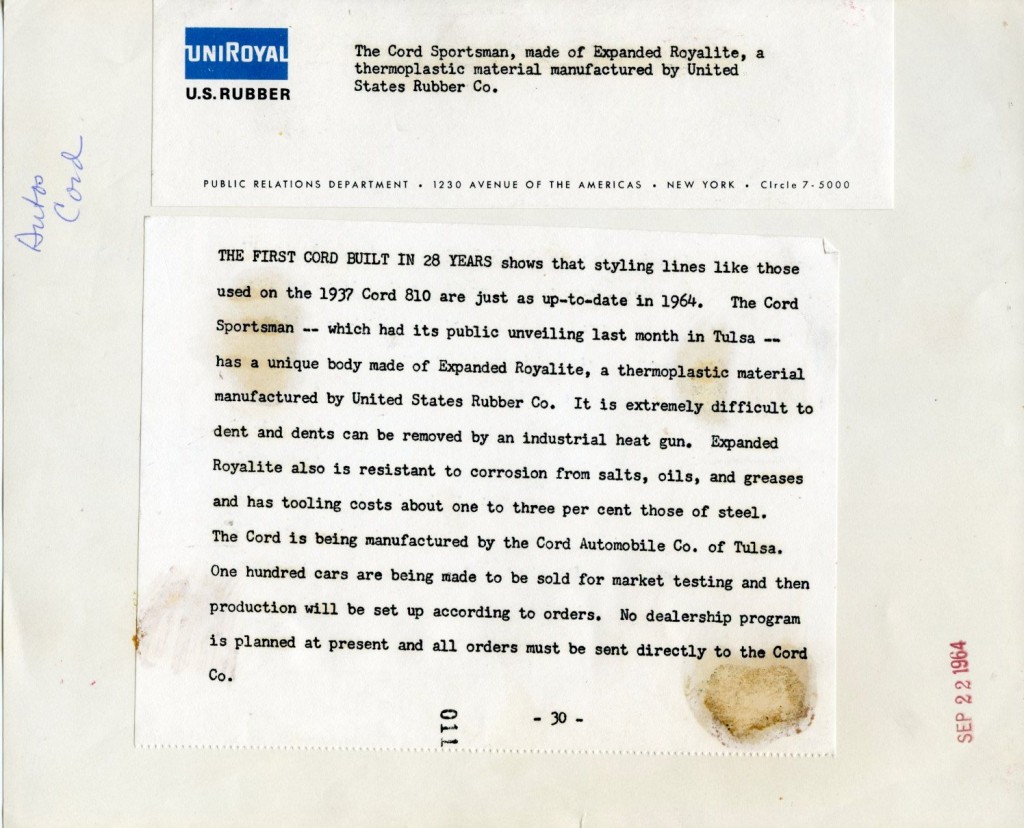 UniRoyal (US Rubber) Demos ABS Plastic – In A “Smashing” Way:

I poked around a bit more on the internet and found an interesting advertisement using Glenn Pray’s Cord showing the strength of the product.  It reminded me of Henry Ford pounding the 1939 fiberglass trunk lid with an ax, and other fiberglass luminaries of the 1950’s demonstrating the rigidity and the ease of repair of fiberglass.  The two-sided ad is shown below.  And yes…..that’s a plastic Cord going thru a brick wall.  That’s too cool.  There’s lots of brick walls near where I live…. I think I could benefit from having one of these cars out at Fiberglass Farms (watch out Rick!) 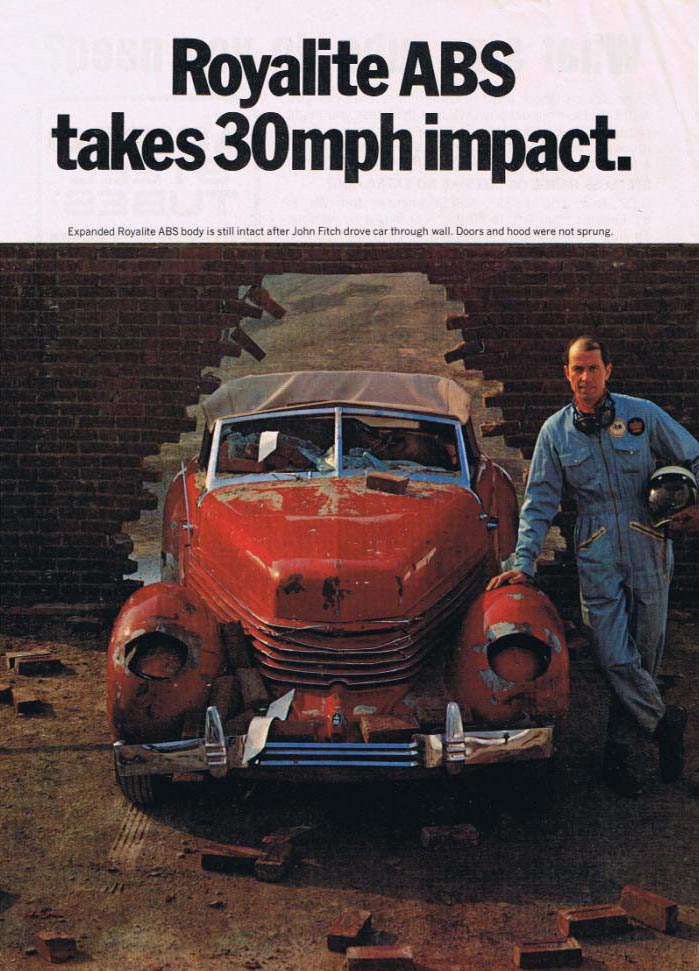 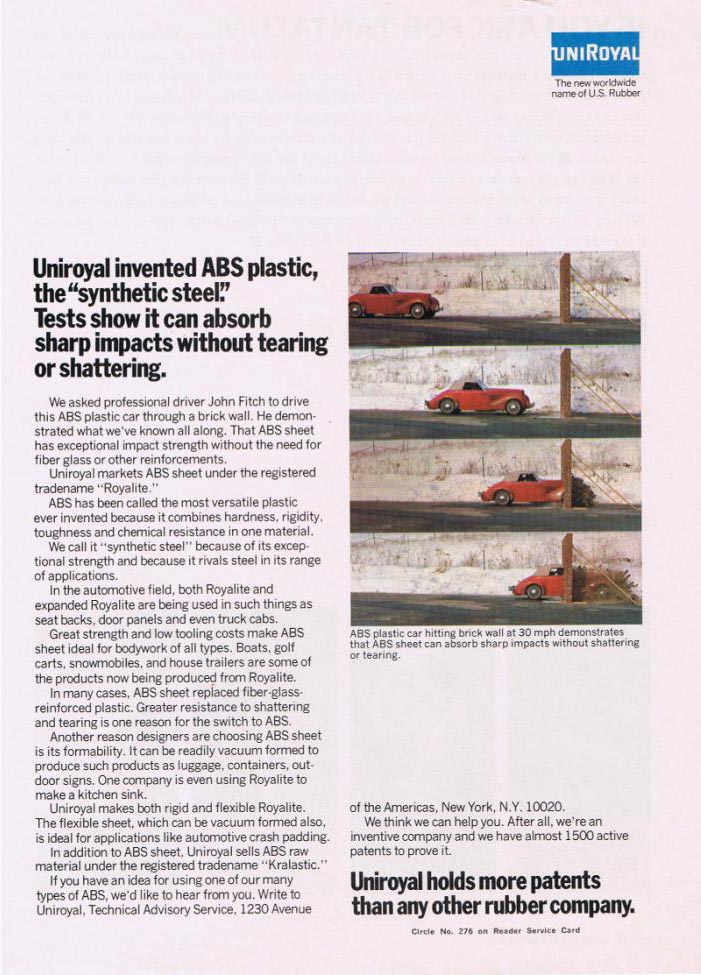 Plastic Fantastic:  And a One, And a Two….

While fiberglass sports cars continued to be released in the 1960’s, at least one more “plastic” car appeared too – the CRV / Piranha.  The initial runs of these cars were produced using a plastic material trademarked as “Cycolac.”  We’ll discuss these cars in detail in the future, but in the meantime, those of you who are at the edge of their seat wanting more info should visit the best website showcasing information about these cars written by historian Nick Whitlow.  Click here to visit the CRV / Piranha website.

I look forward to learning more about the Glenn Pray “plastic” Cord from experts out there.  Perhaps we can convince them to write a story – or two or three – for our Forgotten Fiberglass audience.  Glenn, his vision, and his cars are quite a story, and friends of fiberglass like Arthur Maimbourg out there in Oklahoma who knew Glenn would appreciate reviewing and contributing too.

To support this recognition of Glenn’s accomplishments on our website, I’ve created a “Glenn Pray” category of stories – the first of which you are reading today.  I look forward to expanding the cadre of stories about Glenn in the near future.  And be sure to checkout http://www.glennpray.com/ for some great history and background on the man and his cars. 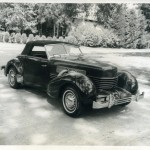 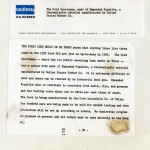 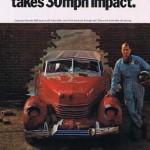 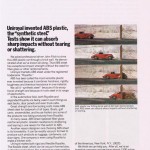 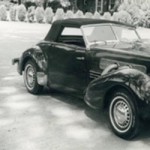