Many of you know my passion for vintage cars started with my grandfather, Morrie Hacker, my mother Ruth, and mentorship in my early teenage years from Paul Terhorst of Chicago, Illinois.  I was well-schooled in great old cars, “big iron” Paul would call them, by the time I found my 1962 Shark Roadster.  I was only 18 years old in 1980 when I finally bought it, and thus began the quest for information about the car and its restoration.  And by the way…that’s when Rick D’Louhy and I became friends – 33 years ago and counting since 1980.

Back in 1979, I found the Shark in this condition: 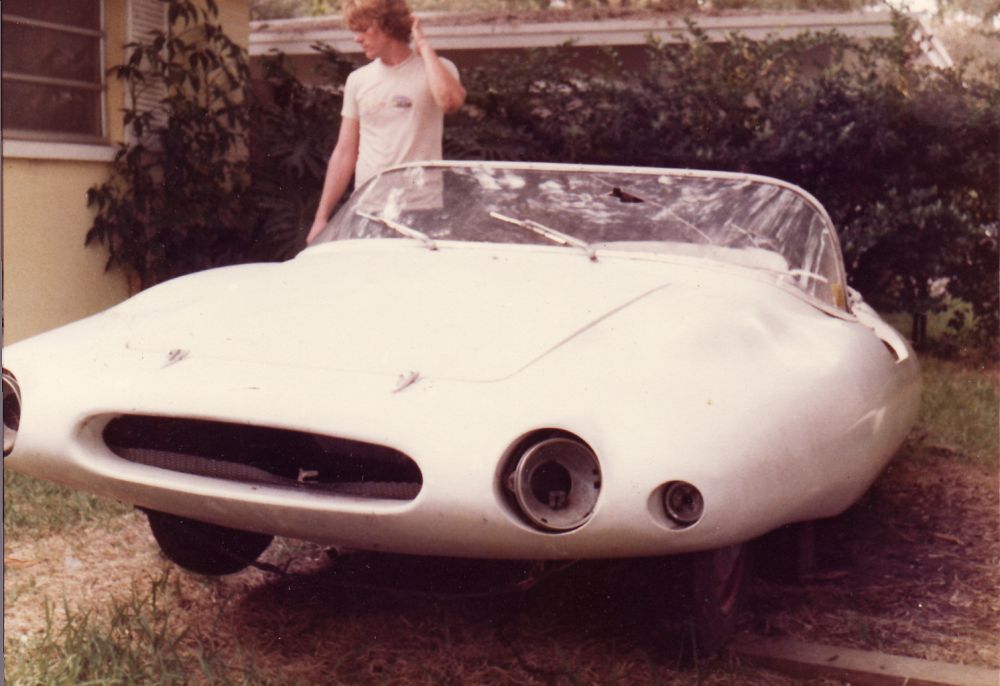 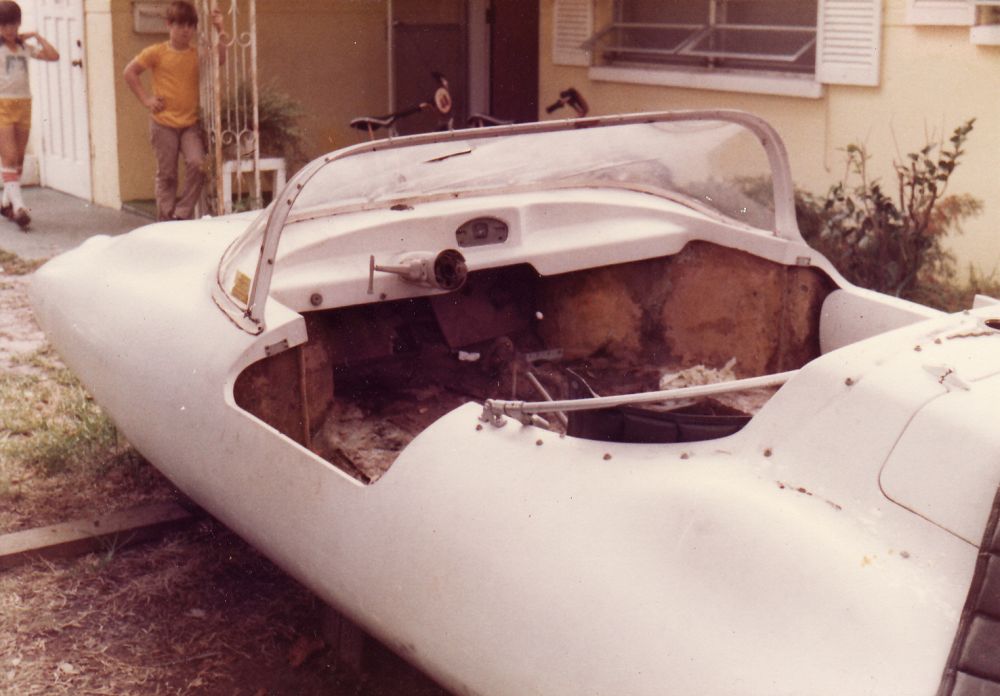 By 1981 I had restored it and was showing it.  It looked great for a young guy who fixed up his neat old car.  I always thought it looked like a futuristic car – come back in time and left as a derelict.

Here are some photos of it at a few shows back then – these were taken in Countryside Mall, Clearwater, Florida around 1981.  I’m shown in the second photo at the back of the Shark (that was my ’55 Caddy I restored too…). 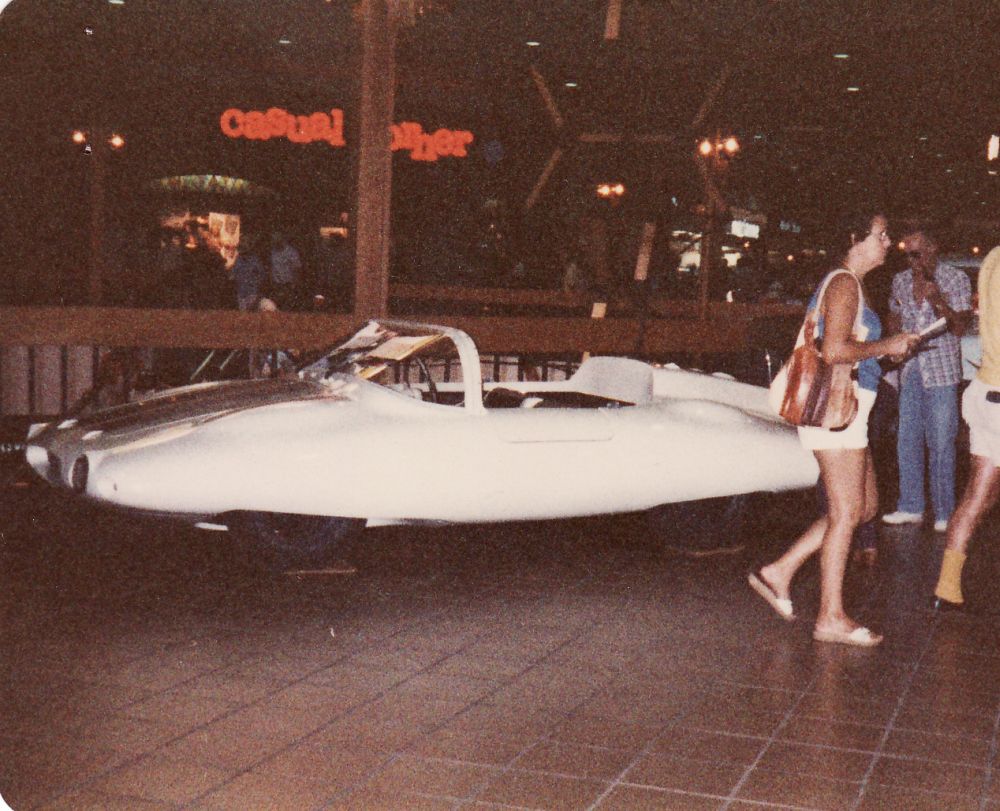 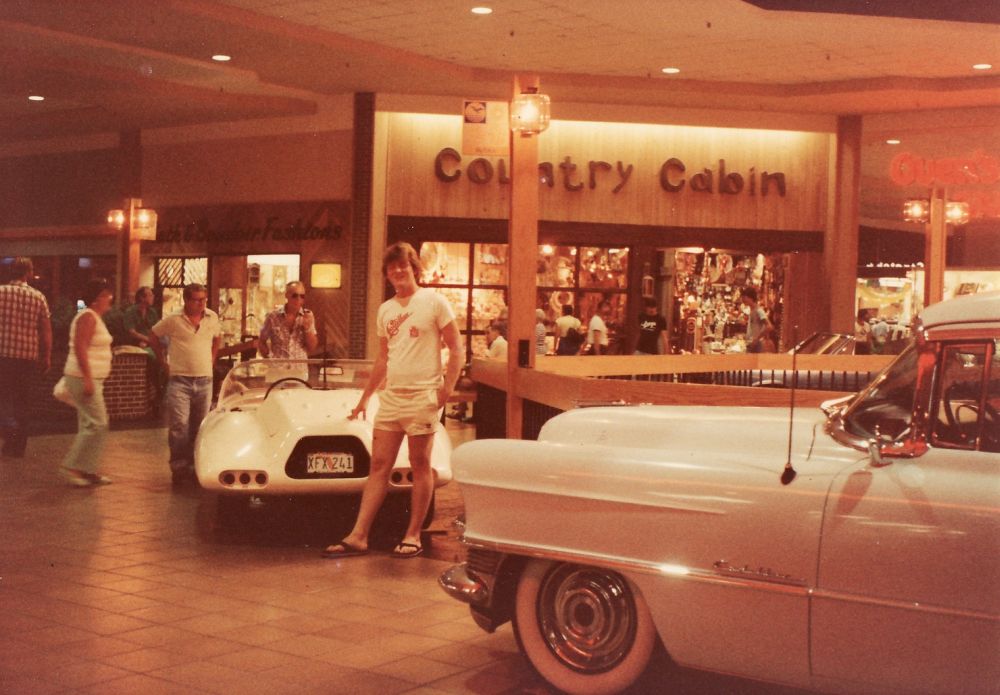 So….fast forward from 1981 to 2013.  Much has happened in my life and the life of each of you.  In fact, I’m surprised I’ve lasted this long – and so has my shark…. saved throughout the years but in need of restoration – as you can see from the photos below: 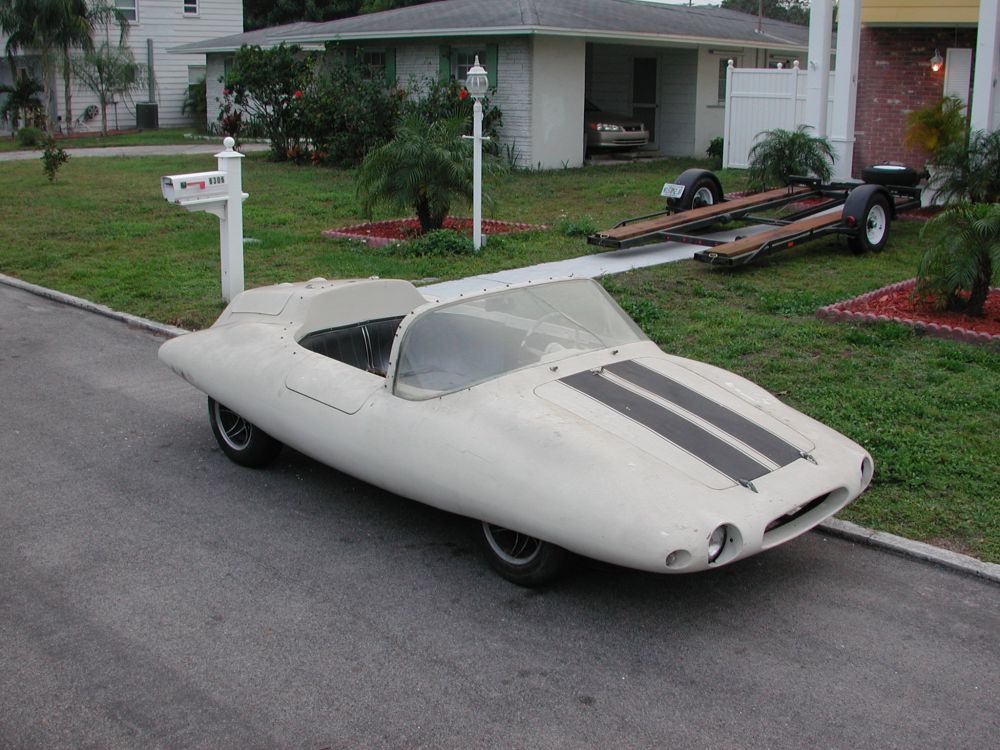 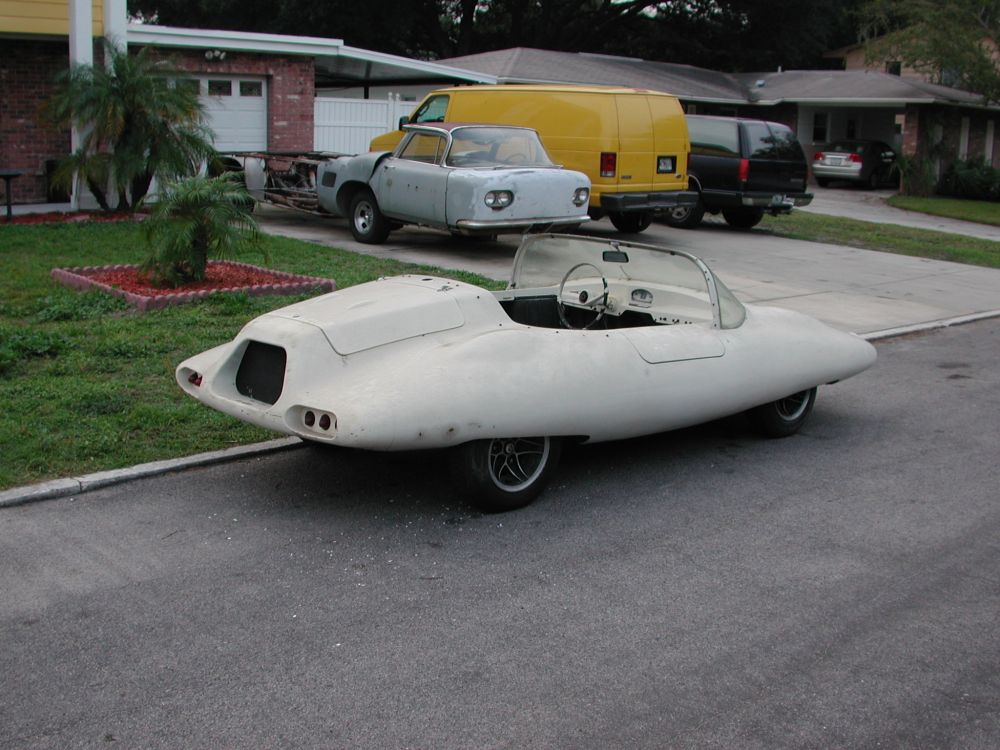 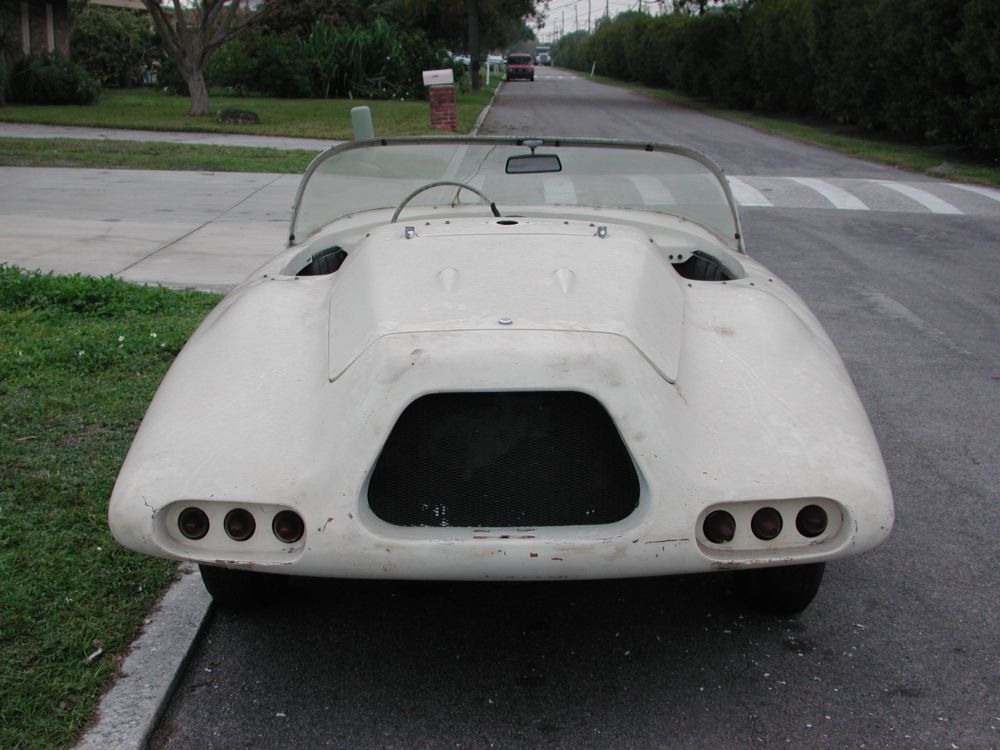 In October last year (2012), I showed some photos of “what once was” to Bill Warner of the Amelia Island Concours d’Elegance, and he said “make it so Geoff.”  I thought to myself, “Who knows the car better than me?”  I wonder….get it ready for a debut on March 10th, 2013 at Amelia Island?  Lots of planning would need to be done, but perhaps, perhaps, perhaps.  The people who are part of our Forgotten Fiberglass group are simply amazing.  The skill level, enthusiasm, design expertise, and sheer fortitude of the “Forgotten Fiberglassatuers” inspires me each day.

So, throwing any intelligent decision making to the wind (which amuses me since one of the courses I teach at the graduate level is “Decision Making…”) I asked for help from a cadre of people – designers, builders, historians, and enthusiasts – to jump on board and help me plan the restoration.  These folks included (in alphabetical order…I am a teacher, after all):

Planning commenced in October, 2012 and through volley after volley of e-mails, we arrived at the best design for restoration in late November, 2012.  We made a small design change to the center of the dash, added a console, and reduced the size of the windshield.  Just three modifications.  And our chosen paint scheme was based on the 1961 Covington Tiburon “Shark” which debuted in March 1961 (about a year before the Mako Shark…but that’s another story).

That left us December, January, and February to complete the restoration and ten days in March to polish it and get it “concours-ready.”  A total of 90 days with 10 extra days to relax and enjoy the Florida sun.  “Sure…why not?” I thought to myself.  We’ve done it before.  With the proper planning in place, we built the 1946 Burke belly tank replica in about 90 days, and we did the same with our 1955 Californian sports car (Mysterion).

So, with the talented and patient efforts of lead designer Dan Palatnik, we arrived at the following view of how the Shark should look when complete.  Below are several renderings of the car as we hope it will appear on the field at the March 10th, 2013 Amelia Island Concours d’Elegance: 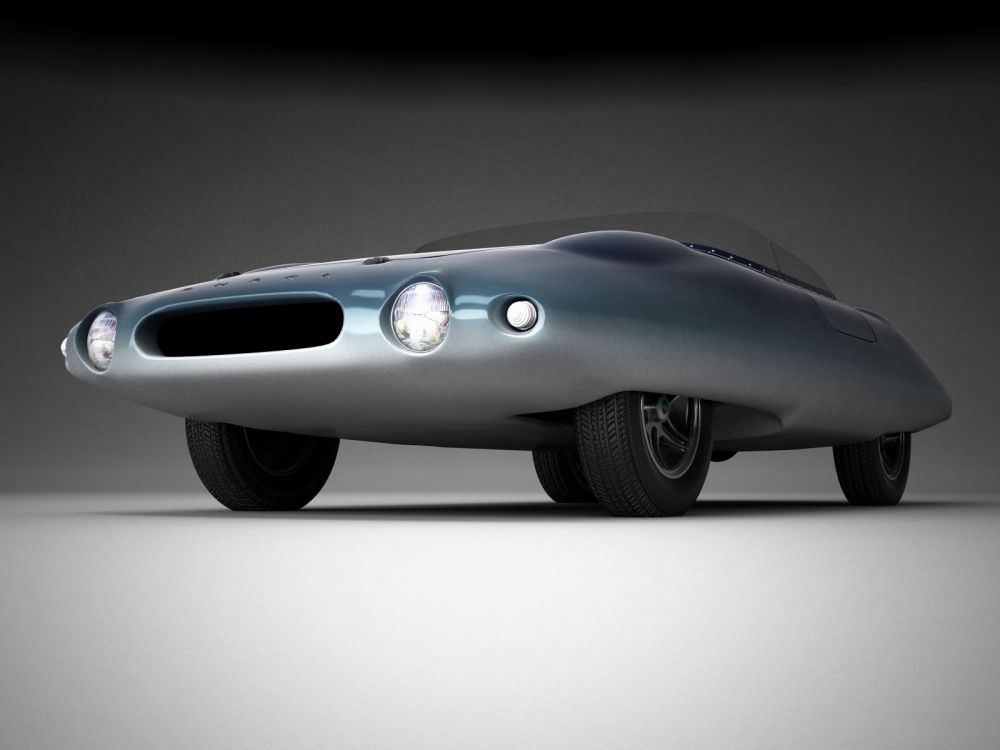 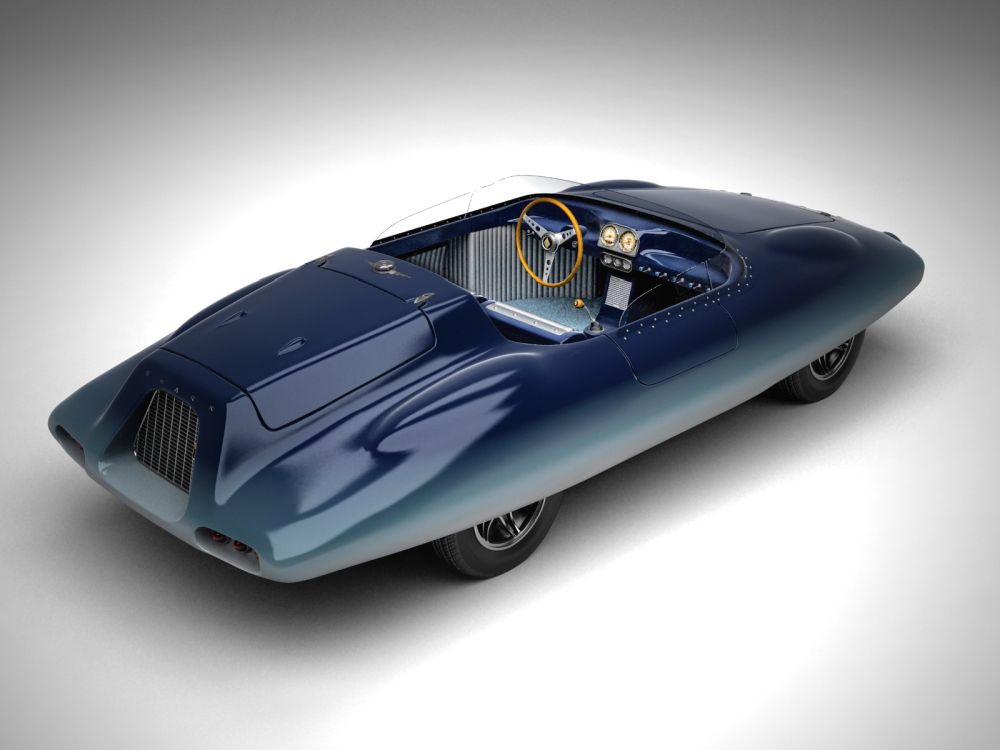 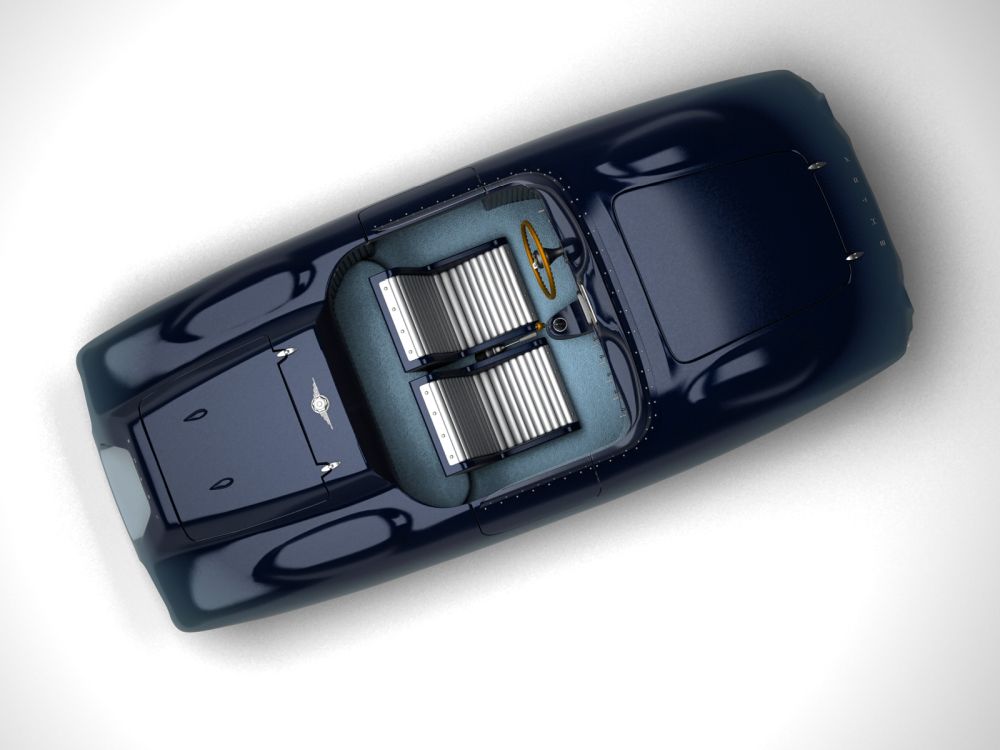 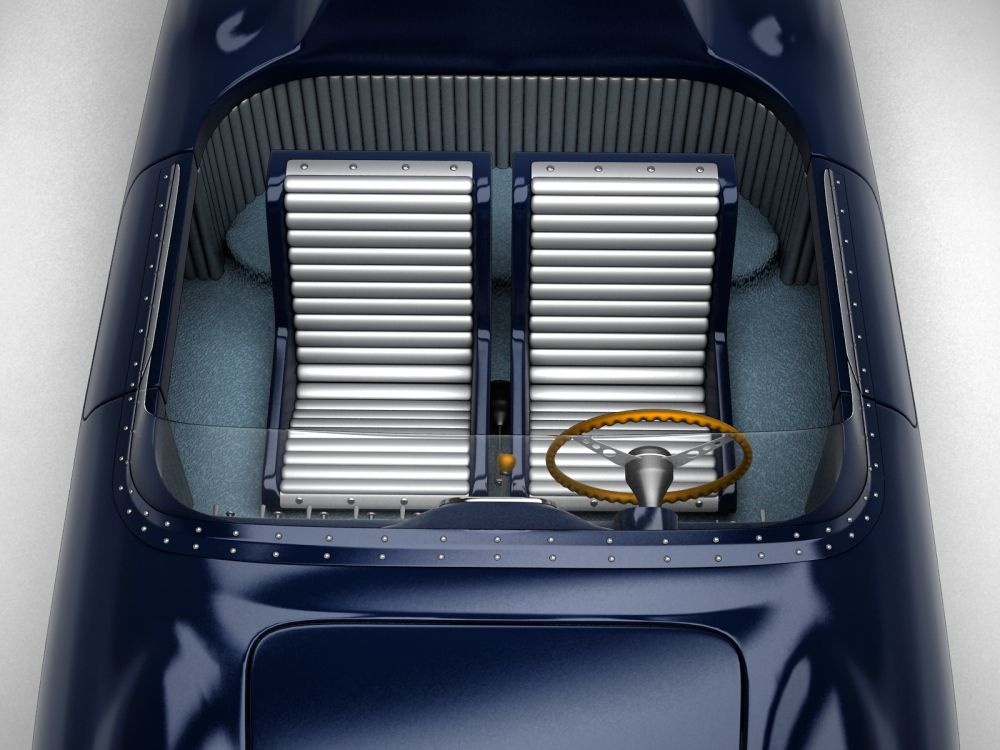 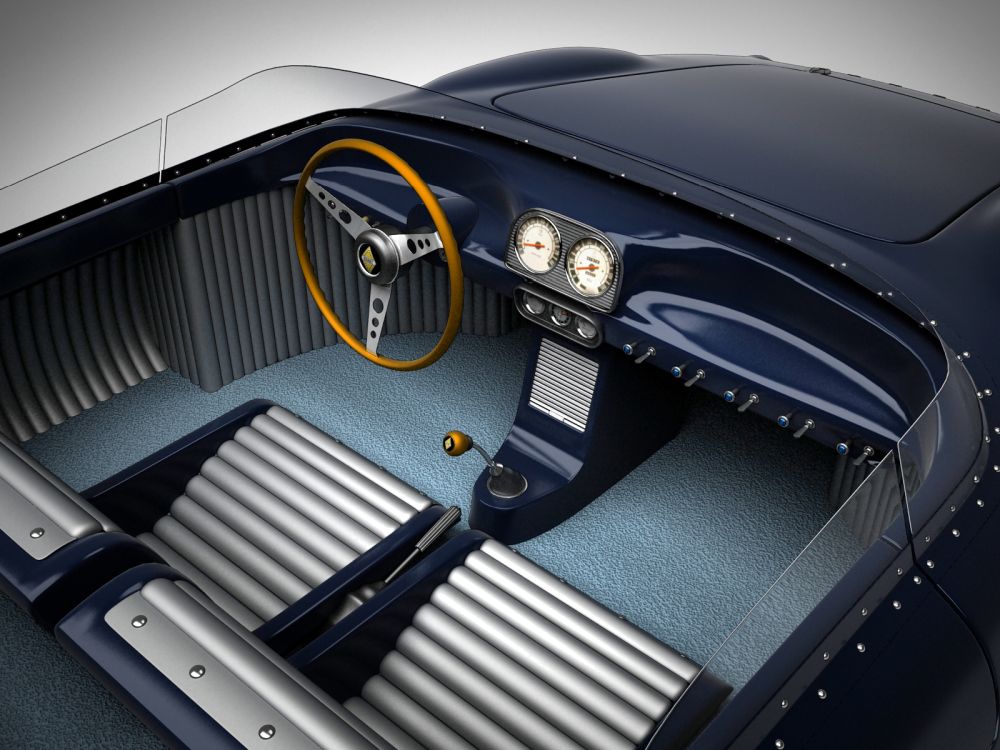 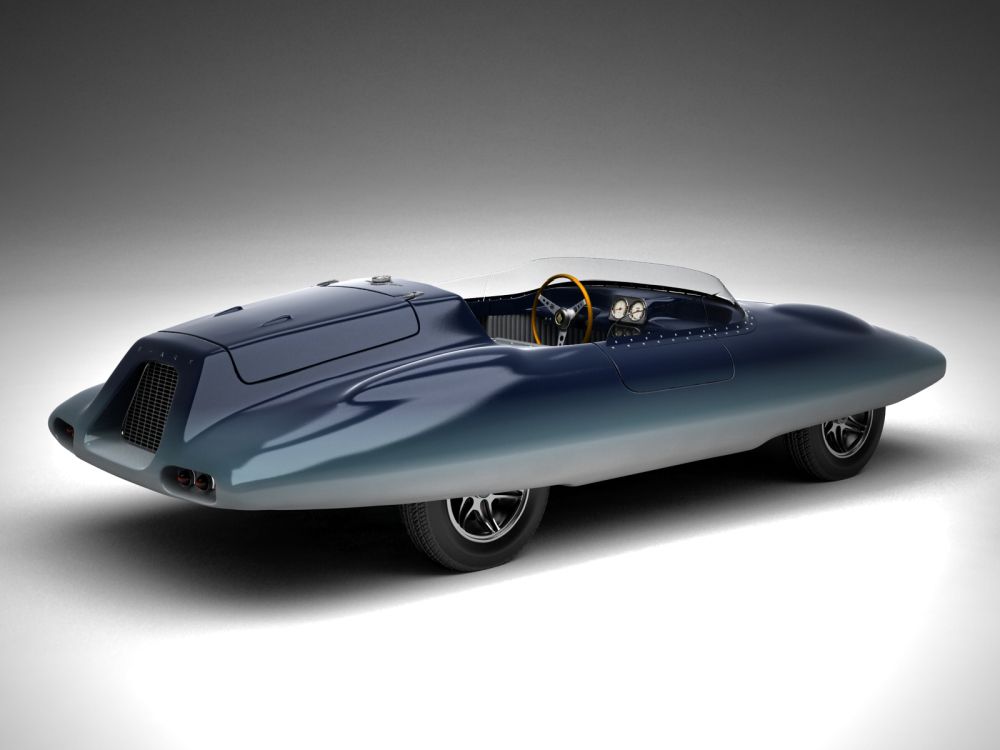 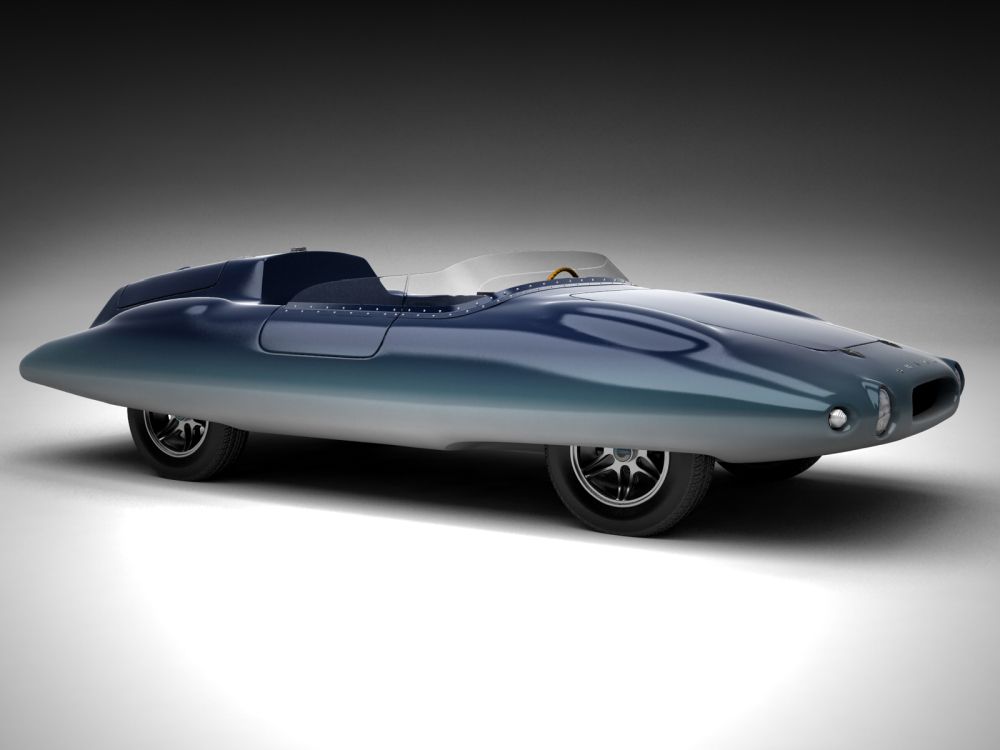 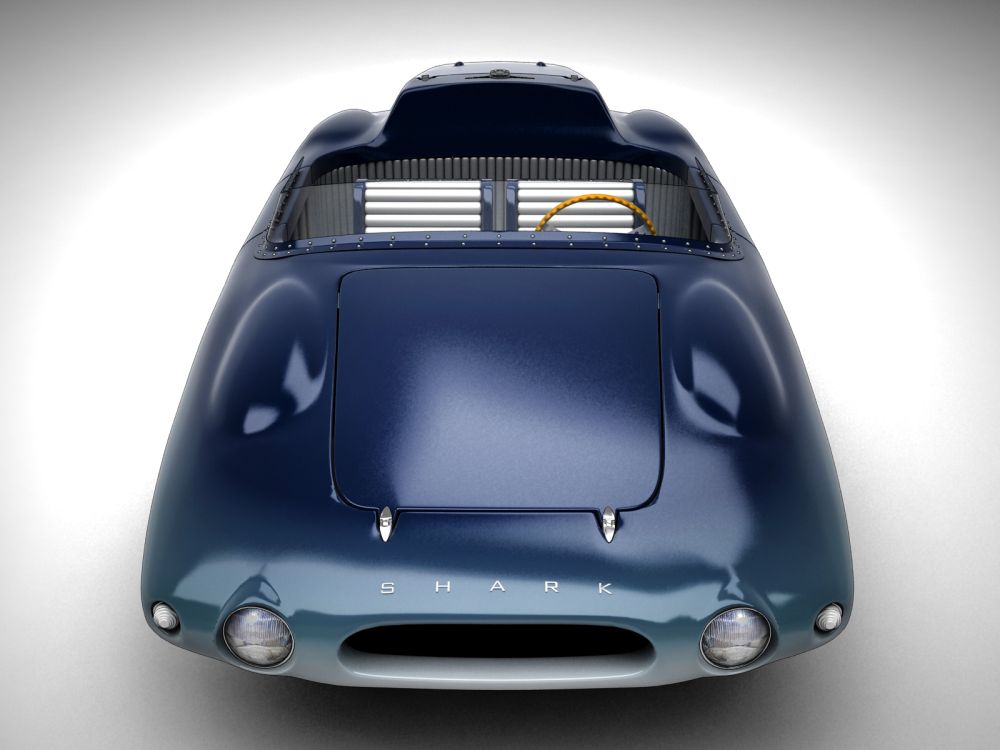 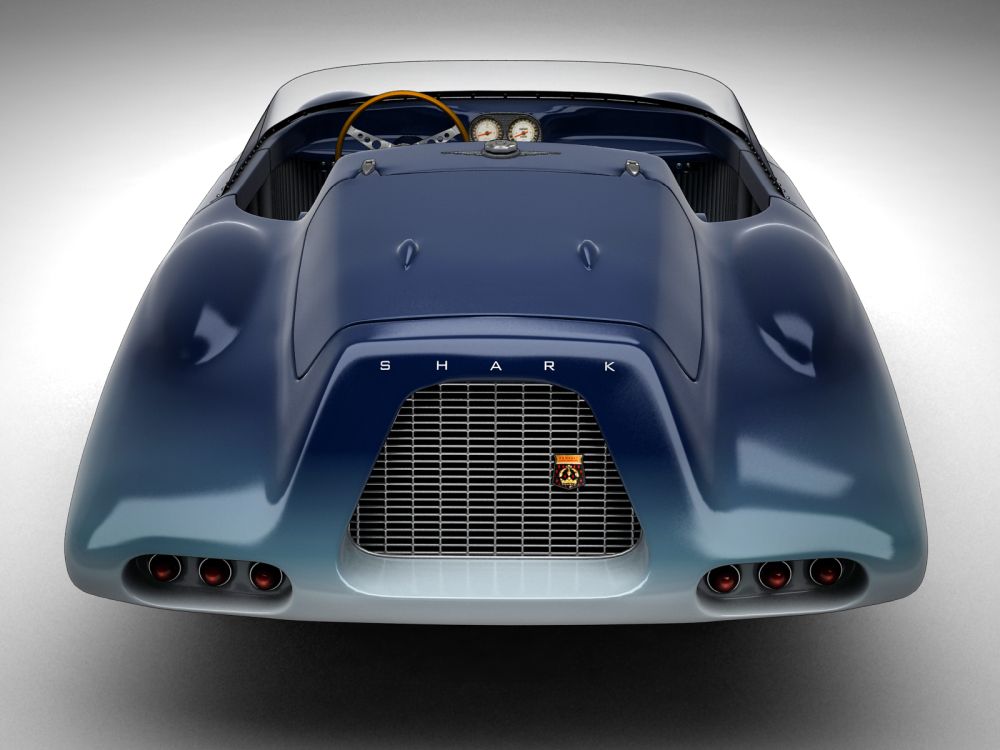 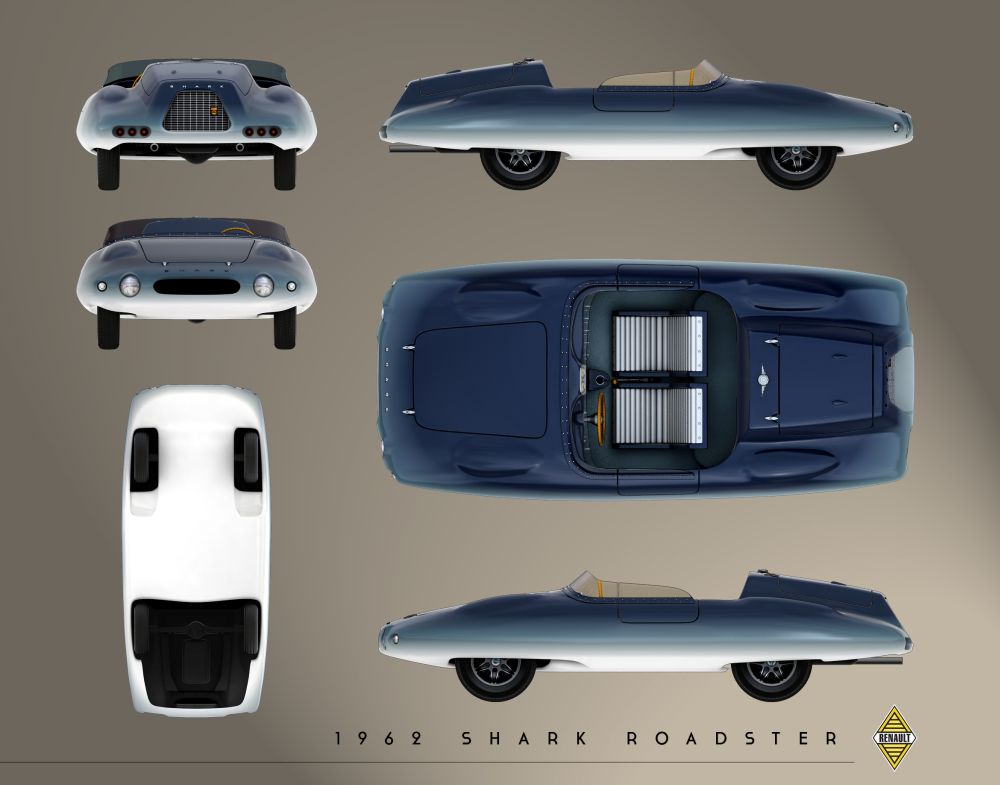 And we’ve made tremendous progress so far.  The pictures below show the newly minted dash, gauge panel, and console in place – the handiwork of Bob Henson of Tom McDonald’s “Ak-U-Tec” machine shop and Mike Irvin’s “M-I Engineering” shop – work by lead fiberglass aficionado Craig Johnson.  The Renault wings, also shown below, have been re-mastered in stainless steel by Dick Peck’s “QTM” machine shop of Oldsmar, Florida.  Dick is also creating the letters that form the word “SHARK” for the front and back of the car – in stainless steel, no less! 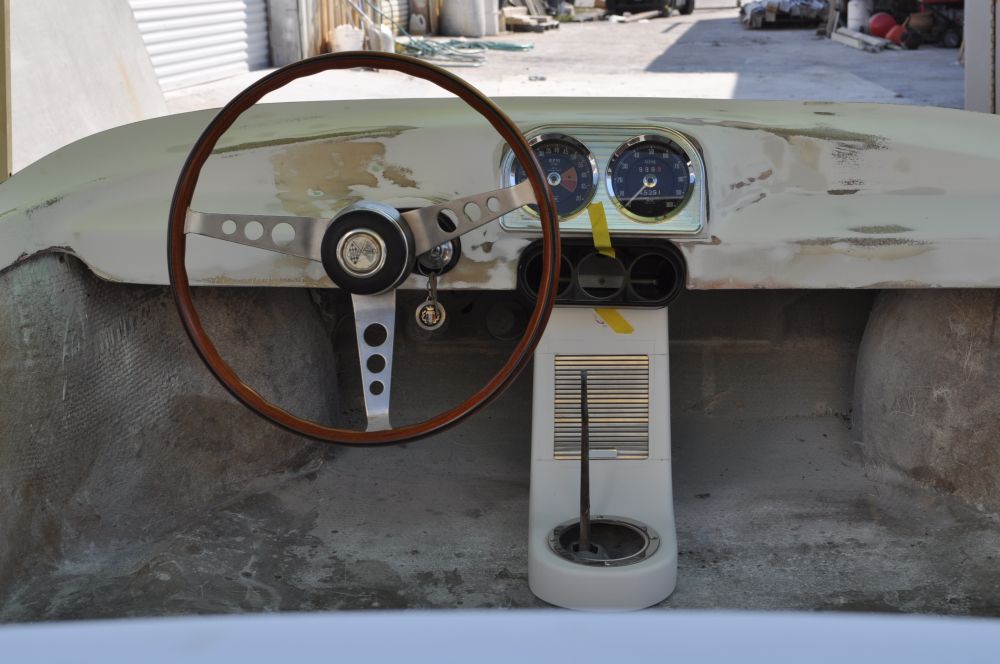 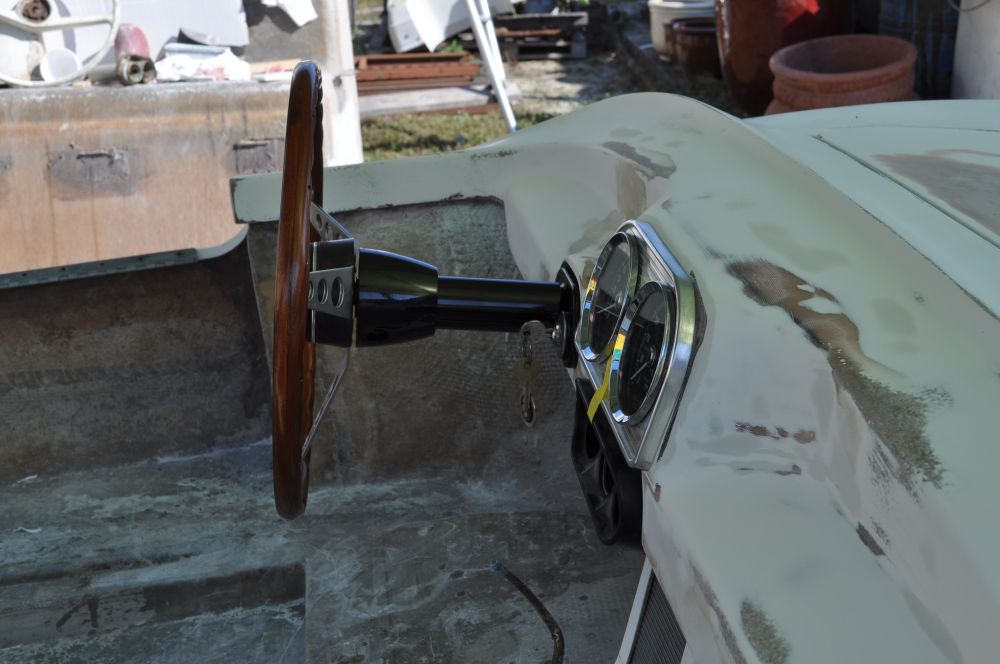 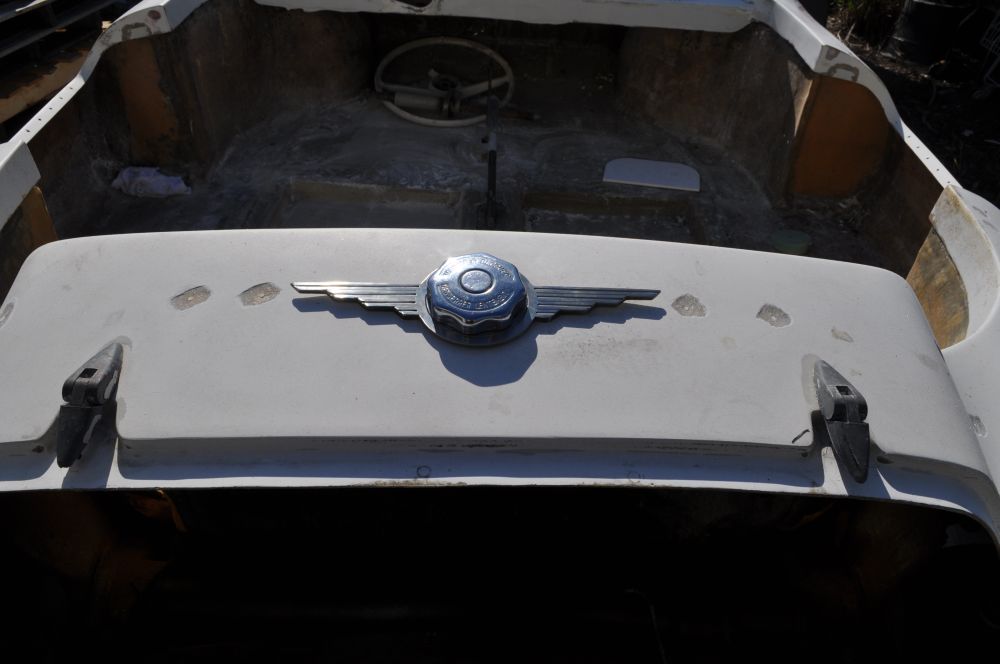 So far so good.  The fiberglass work should be complete this week, and final welding modifications and strengthening occurs next week.  After that, paint and upholstery and we’re good to go.  Opps…almost forgot about the windshield – we have to do that too.  Sometime in February.  But don’t worry Bill (Warner)….we have a great project team in place and they won’t let me forget a thing.  And…we have this trusty website link that whenever you click it – it tells me how many days left I have to finish the restoration – a “countdown clock” to the Amelia Island Concours d’Elegance.  Click on it and watch your blood pressure rise:

Stay tuned…more to share in the coming weeks in the lead up to Ameila Island.