As we continue to uncover the history of handcrafted cars in the 40s and 50s, we collate, organize, and share what we learn continuing to build a comprehensive database showing the nationwide – and worldwide – movement in building your own sports car in the early postwar era.

But that’s not all we’re looking at.

We’re also studying  how this history was looked at and written about after the era ended by authors and researchers alike.  Here’s a snapshot into some of those early articles:

And some of the early books detailing this history include:

These articles and books showcase great histories on specific cars as well as the movement of America sports cars in the postwar era.  Recently I was made aware of another book by one of the authors above – Rich Taylor – that focused exclusively on the early postwar American sports cars.  This book is titled:

The American Sports Racer: From Kurtis to Cobra

What a great find this was indeed!  Having an author focus exclusively on the era and its sports cars is a treat to see – especially not long after the era had ended (about 20 years earlier if you use 1959 as the reference point).

Let me share Rich Taylor’s biography which appears at the back of this book to illustrate why this author and this book are important to all of us wanting to learn more about the early postwar history of American sports cars:

Rich Taylor, former managing editor of Car and Driver, takes you on this fascinating stroll through the garages and starting grids of American road racing’s Golden Era, from the late Forties to the mid-sixties.  Scarab, Devin, Chaparral, Bocar, Sting Ray – From Kurtis to Cobra is a marvelous book idea that found its ideal author.

Taylor lives on the banks of the Hudson River north of New York City.  He is an extremely busy author of 10 books and innumerable magazine articles.  By no means limited to automotive topics, he has written for House and Garden, Jurist Doctor and the New York Times.  His many contributions to Car and Driver are just the leading edge of scores of automotive pieces.

He was also editor of Special Interest Autos.  He writes a well-known column in Old Cars which gave the inspiration for many of the ideas in this book.   He has written the definitive history of jai-alai for Doubleday and has also been published by Scribners and Western.

Taylor has lived in Amsterdam, Holland, and traveled extensively in Europe.  He has raced motorcycles, cars, go-karts, and boats. He is also an active sailor.  Truly “into cars,” Taylor uses a ’57 Chevy Nomad for everyday driving and has four racing motorcycles, one of them a highly desirable Ducati GP racing bike.  He is also restoring his 1878 Victorian home overlooking the Hudson.

And, most especially, as you will learn in a delightful anecdote in this book, he has a Devin SS of his very own.  He has it entirely due to expressing the same kind of interest in the American sports/racers that you have expressed in picking up this book.

Rich was (and is) an author, researcher, and owner of one of these “Specials”- a Devin SS.   And he wrote about his interest and the history or early postwar American sports cars in 1979 – showing the same passion and understanding of this era that we now have nearly 35 years later.

Let me share the “Introduction” to this book, and you’ll see why I am so excited to focus on this book in today’s story. 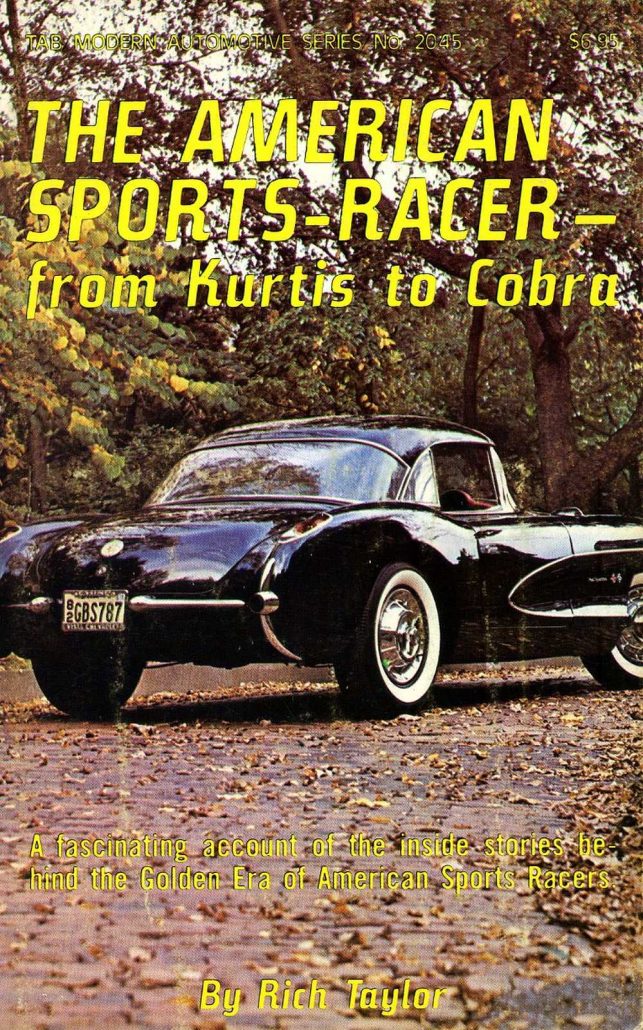 The American Sports Racer – From Kurtis to Cobra (1979)

A Fascinating Account of the Inside Stories Behind the Golden Era of American Sports Racers:   By Rich Taylor

In the fifteen years between 1948 and 1963, American road racing grew up.  From a small group of Eastern playboys toying with foreign cars, it blossomed into an international challenge spearheaded by the corporate might of Ford Motor Company.

The real heroes of that halcyon era were the inspired American mechanics who built big, unlimited class sports/racers using everything from flathead Ford V-8s to supercharged Chrysler Hemis.  Their cars were often crude, often naïve.  And they were never subtle.

But by God, they worked.

The concept of the American sports car was a simple one.  You either borrowed or copied the chassis of a European racer and then dropped in a typical hot-rodded American V-8.  The result was either a little sports car with a lot of horsepower, or a hot rod that handled….whichever way you like to think of it.  In either case, the thing had to be one of the great performance cars of all time, through simple vehicle dynamics.  Somewhere around 400 horsepower in a 1500 pound chassis cannot fail to be exciting.

In 1951, for example, when hot passenger cars were lucky to break 90 mph, the Cunningham C-2s were clocking 150 at Le Mans.  Think about it.  Going 150 mph on skinny little tires, with laughable brakes and a non-aerodynamic nose that inevitably lifted whenever you got on the gas with any authority. A decade later, the Cobras – which weren’t very much more refined – were going nearly 200.  It took a special kind of man to drive one of these thing in anger, and John Fitch, Briggs Cunningham, Chuck Daigh and Ken Miles were among the best drivers in the world.  It took more than a few cojones to be a racing driver in those days.

All Were Based On Production Cars:

But it was the cars that were so different.  The American constructors – since they were virtually required to use production-based engines and transmissions because of the prohibitive cost of building engines from scratch – were almost completely cut off from the “mid-engine revolution” that was going on in Europe.

Nearly all the American sports cars had a hulking V-8 mounted up front, with a production manual transmission hooked on behind.  Frames and suspensions were equally conventional, though there was a big interest in deDion-type independent rear suspensions.  By the late fifties, of course, almost everything had disc brakes.

The front-engine American sports car dates from a simpler era, when straightforward design, robust construction and ungodly amounts of sheer horsepower were more than a match for double-overhead cams, V-12s and aluminum blocks.  And they were better, too.  Somehow, we all remember the Ferraris and Maseratis and OSCAs of that era, but forget about the Bocars and Devins and Scarabs.

In the big unlimited classes – which is where the action was – the Americans more than held their own.  Even the Corvette – despised as it was by the string-back gloves types – was a hell of a racing car with more speed than anything anywhere near its price.

There was a lot of “snobbism” in the sports car world in the fifties, and anything that had a pushrod engine from Detroit was definitely out.  An OSCA made in somebody’s back garden in Bologna had “breeding.” A Cunningham built in the most advanced race shop in the world was simply “American Iron.”

By the time the Cobra came out in the mid-sixties, however, all this had changed.  Phil Hill was champion of the world, Corvettes were acknowledged to be just as good as Aston Martins and Maseratis, even though half the price, and Ford Motor Company Shelby’s Cobra was an immediate hit, not because it was particularly better than any other American sports car from that era, but because the public – racing spectators and sports car buyers alike- had been educated to believe that ta thumping great V-8 in a little bitsy roadster was a good thing..

Personally, I find everything about these old American sports cars fascinating.  They’re historically important, marking a great turning point in the development of the automobile in America.  They were built by interesting people.  Men like Briggs Cunningham, Frank Kurtis, Bill Devin and Ken Miles could never be dull.  It is axiomatic, I think, that while a brilliant designer can produce a dull car, it is virtually impossible for a dull designer to produce a brilliant car.

Not a one of these cars nor designers is dull.

Finally, of course, the cars themselves are just as appealing now as they were twenty years ago.  The neat thing about a Devin SS in 1958 was that not only could you beat somebody’s Ferrari that cost four times as much, but while he was still waiting for parts from Maranello, you could get bits and pieces for a small block Chevy V-8 right around any corner.

This made the car not only a lot more convenient to race, but a lot cheaper, too.  That’s a big part of the appeal of these cars today.  They are still relatively undervalued and unknown, which makes them excellent bargains as exciting collector cars.  You can restore them easily, you can maintain them inexpensively, and you can even race them competitively with the Vintage Sports Car Club and similar groups.

I predict that there’s going to be a real renaissance in American sports cars, for a variety of reasons.  Not the least of which that they’re really fun. 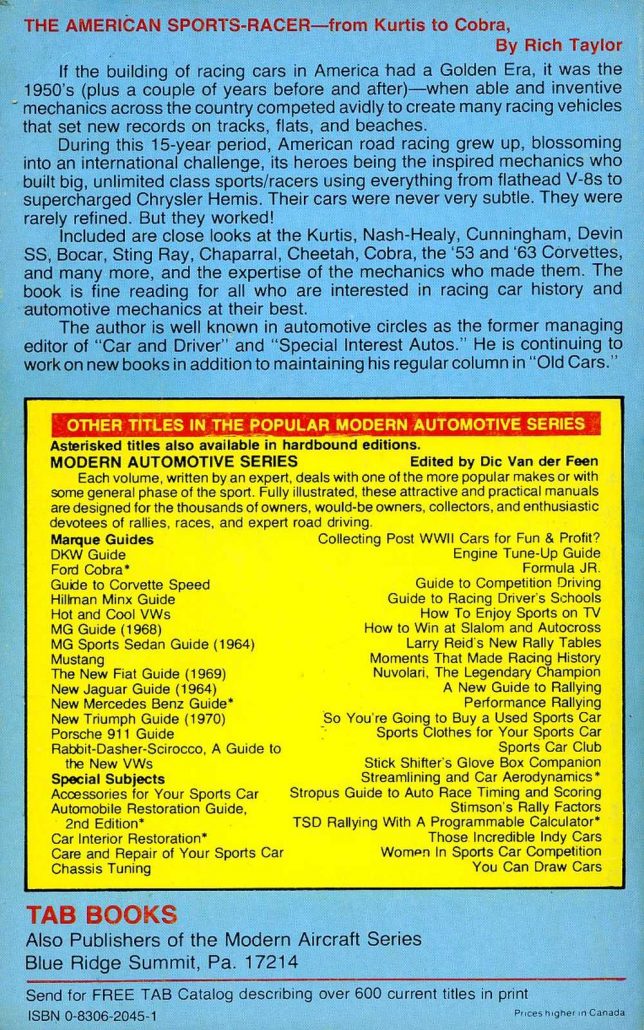 Sharing Some Thoughts Of This Book:

Rich did an excellent job at setting the stage for a short history on the significant cars of this era and their history.  Here’s the “Table of Contents” of this book for your review: 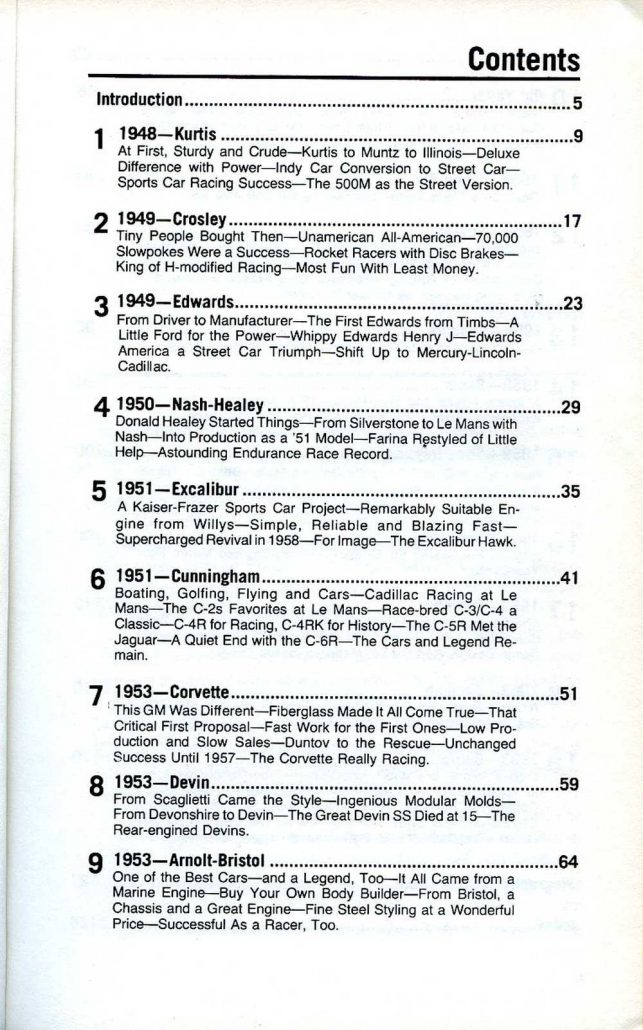 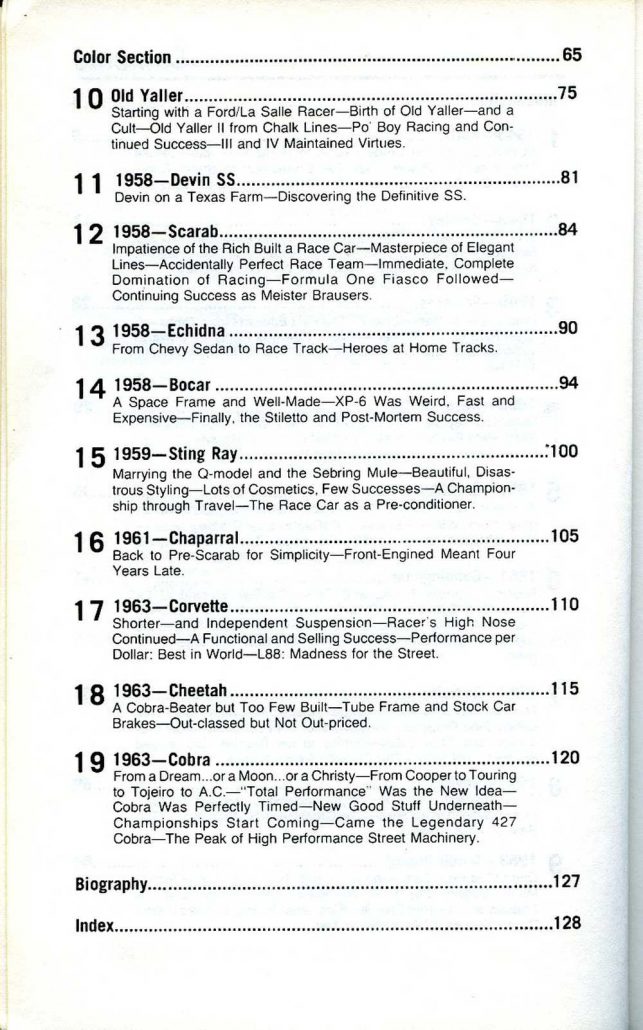 And for those of you interested in purchasing this or other books that he has written in the past, you can do so on eBay and other book sites easily.  Here’s a link to books he’s authored currently on Amazon.com:

I recently talked to Rich about what he published back in 1979 and asked him if he would be willing to update his thoughts on these cars and their place in history – now – in 2014.  Specifically, I’ve asked him to reflect on the introduction he wrote to his book, considering if the hobby has made progress in how they view these cars or if we still are waiting for the last part of what he wrote to come true where Rich said:

“I predict that there’s going to be a real renaissance in American sports cars, for a variety of reasons.  Not the least of which that they’re really fun.”

For those of you wanting to learn a bit more about Rich Taylor and some of his activities today, you can explore his website which focuses on Vintage Rallies that he organizes and run.  Click on the link below for more information: 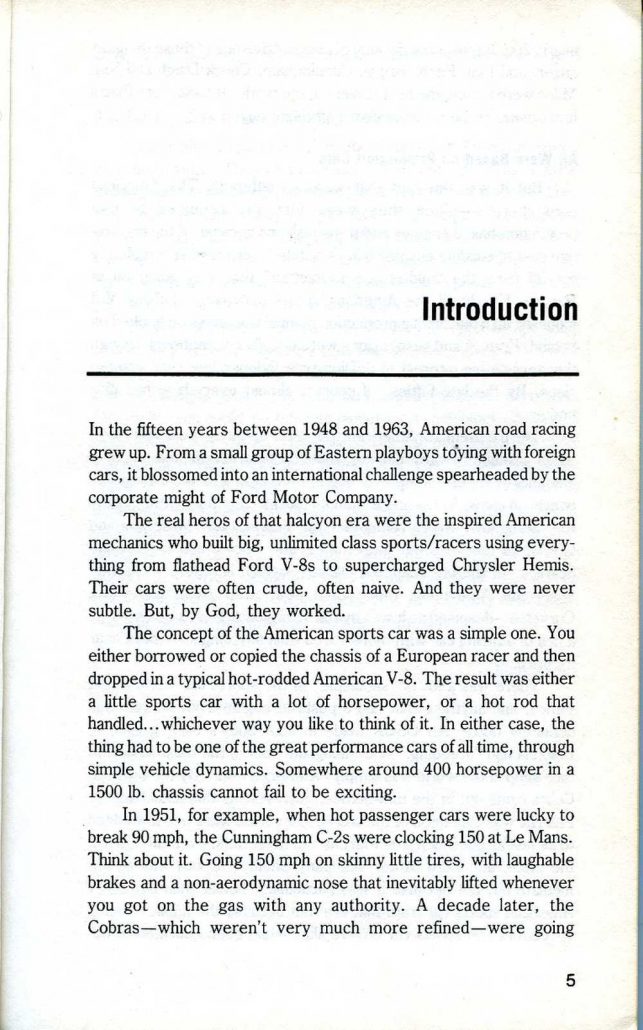 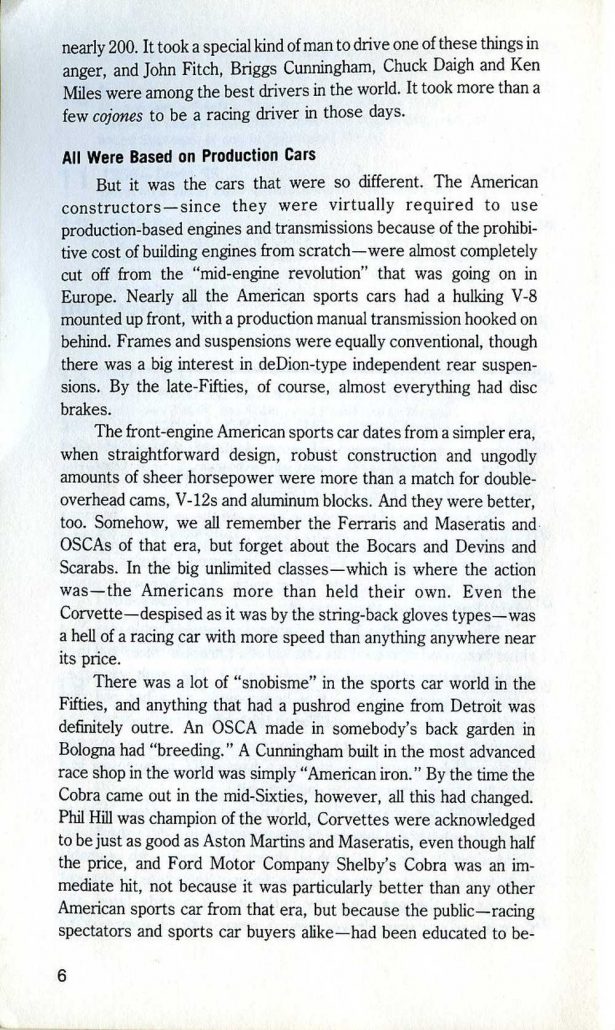 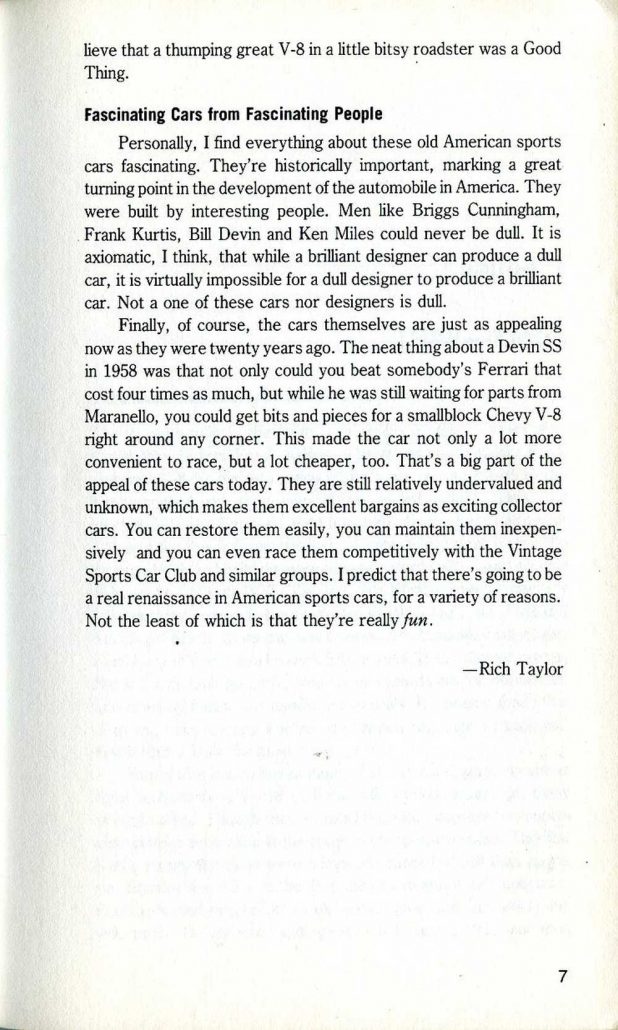