We are blessed here at Forgotten Fiberglass to have such a varied and skilled group of fiber raconteurs that make the cars interesting and the people in our group even more so.  Today’s story is about a Kellison fiber-find by good friend Bob Peterson from Cedar Rapids, Iowa.  But as you dig into the story, you’ll see it’s much more.

It’s an adventure – both in finding a car and discovering the little known history of it.  And as you see, it will reveal some of the highly creative and little known projects that entrepreneurs such as Jim Kellison were making a go of in the business.

When Rob acquired his Austin-Healey Sprite (Bugeye) in Iowa in the late 1960’s he wanted to modify it. He thought his 1960 Bugeye with 66,000 miles was a bit ugly, as did many people. The headlights were the real problem. Austin-Healey’s designers put them on top of the hood and not in the fenders. So they became known as Bugeye Sprites. Bugeye is the slang term that owners in the USA call their Mark I Sprites. People in the UK (England), where the Sprites were manufactured, call them Frogeye Sprites. The Mark I Sprite was only built for four years, 1958 through 1961. A total of 48,999 were built. 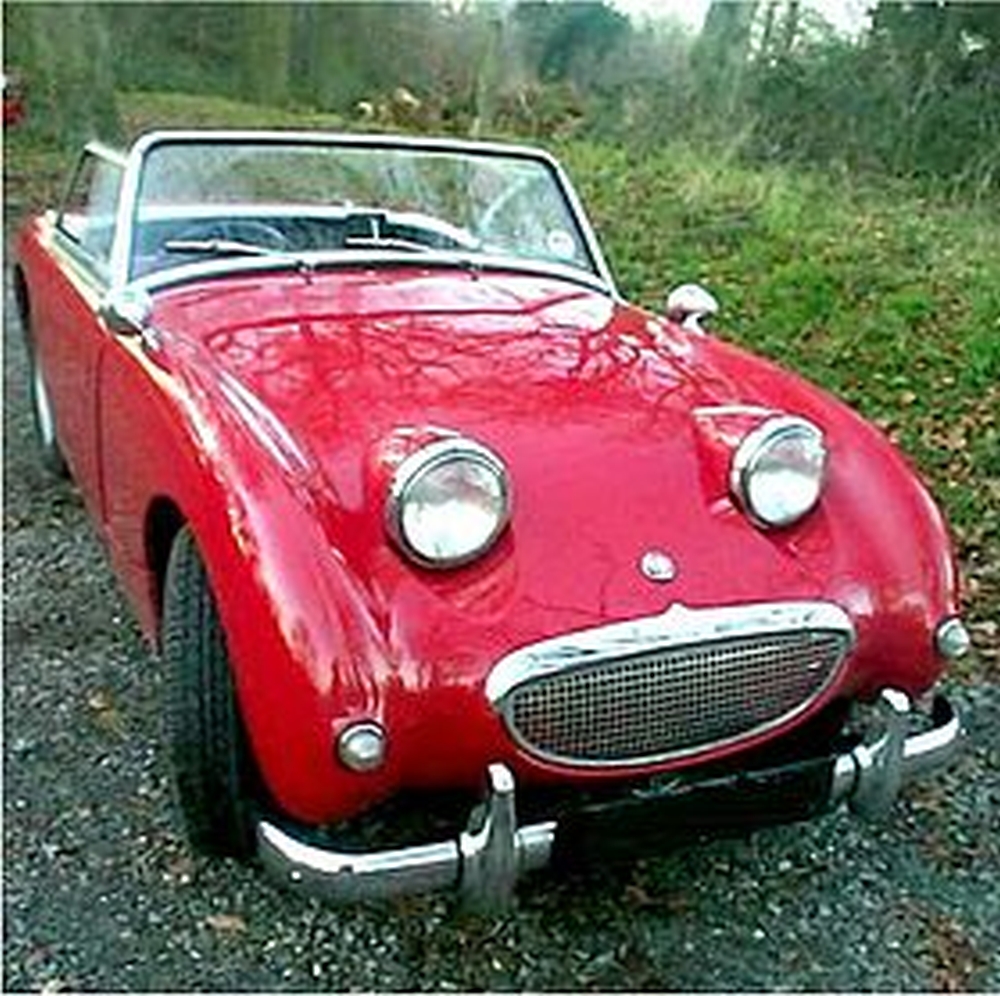 To resolve the ugly issue of the Mark I Sprite, Jim Kellison of Kellison fiberglass company in Lincoln, California created a unique one-piece fiberglass front end for the Sprite. He put the headlights in the fenders where Austin-Healey’s designers should have put them in the first place. Kellison’s design solution is a sleek European shark nose front that was very distinctive for the 1960’s. Does anyone know how many of these were manufactured by Kellison and Allied? 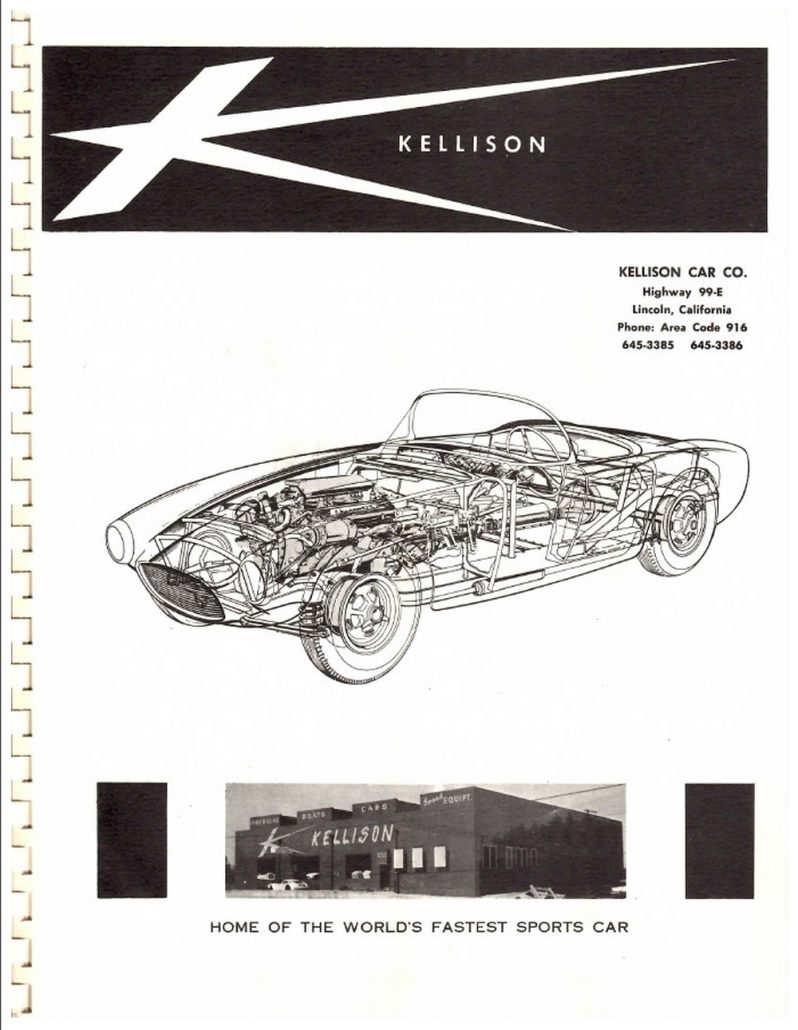 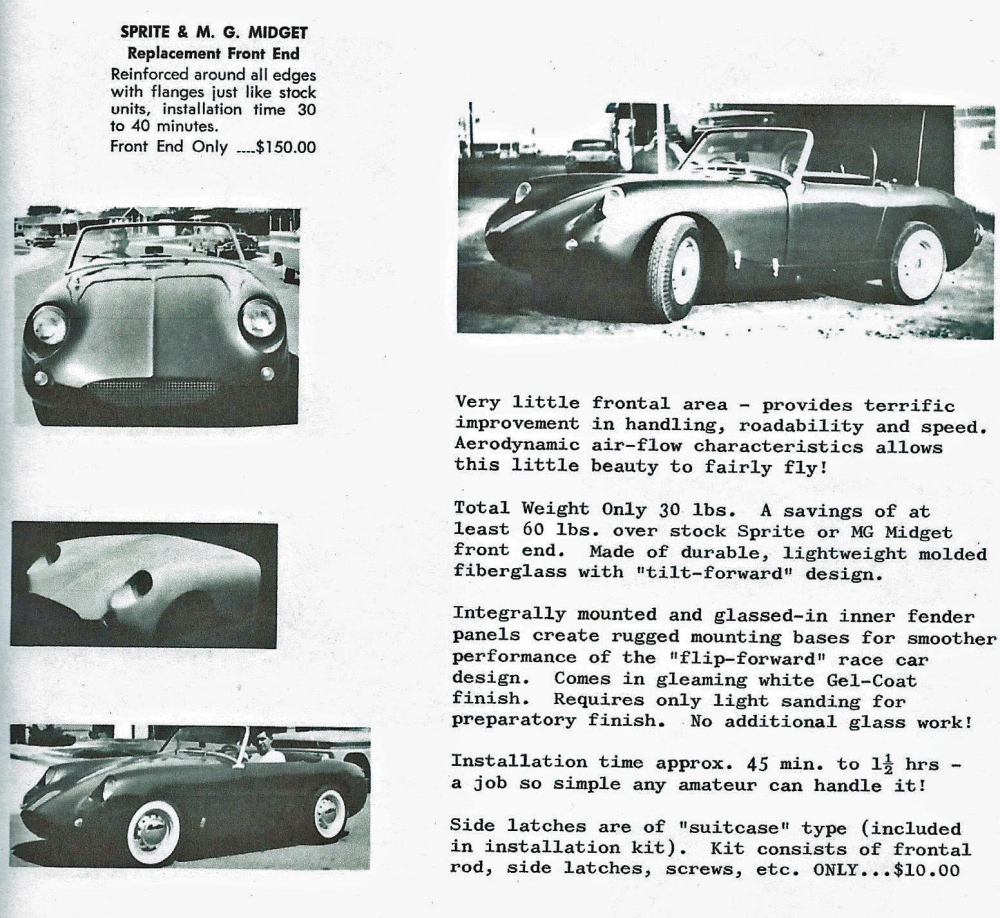 Rob thought the Kellison/Allied one-piece fiberglass front was the answer to the ugly problem. Rob purchased his front end from Allied Fiberglass. Rob’s plans also included installing a small block Chevy. So, he sold the original 4-cylinder Sprite engine and transmission. As time went on, Rob lost interest in the project before the Chevy engine was installed. The project sat unfinished and was last licensed in 1970.

In 1991 Rob asked his friend Gordon if he could store his Sprite in one of his buildings. Gordon had several old farm buildings on his Iowa acreage. “Sure,” Gordon said while adding, “I’ve got just the place for it.” Rob eventually moved to Texas and left the car at Gordon’s acreage. The Sprite was put into an old 30’ x 40’ single story building, which is hidden in a dense clump of trees near Gordon’s silo.

It’s now 2008 and Bob Peterson needs a place to store his Featherlite car hauler. Bob’s friend Gordon said, “I’ve got the place for it. Put it down by the old silo.” For six years Bob’s trailer is parked within 75 feet of Gordon’s old barn with Rob’s Sprite. And Bob doesn’t know the building is there or the Sprite because of the over growth of trees. Bob works on his trailer, hauls many cars in it over those six years, and parks it within a stones throw of the barn with Rob’s Sprite.

A few months later, Rob told Gordon’s fiancé Carol, to see if she could find someone who might want the Bugeye for free. Carol then asked me, “Bob, would you like to have an Austin-Healey Bugeye Sprite for free?”

Carol replied, “It’s in the building next to your trailer.”

With a puzzled look on my face I said, “There’s no building next to my trailer.”

Hidden in an overgrown clump of trees, within 75 feet of my trailer is an old farm building with lots of stuff in it. In the far corner sat a little Austin-Healey Sprite. 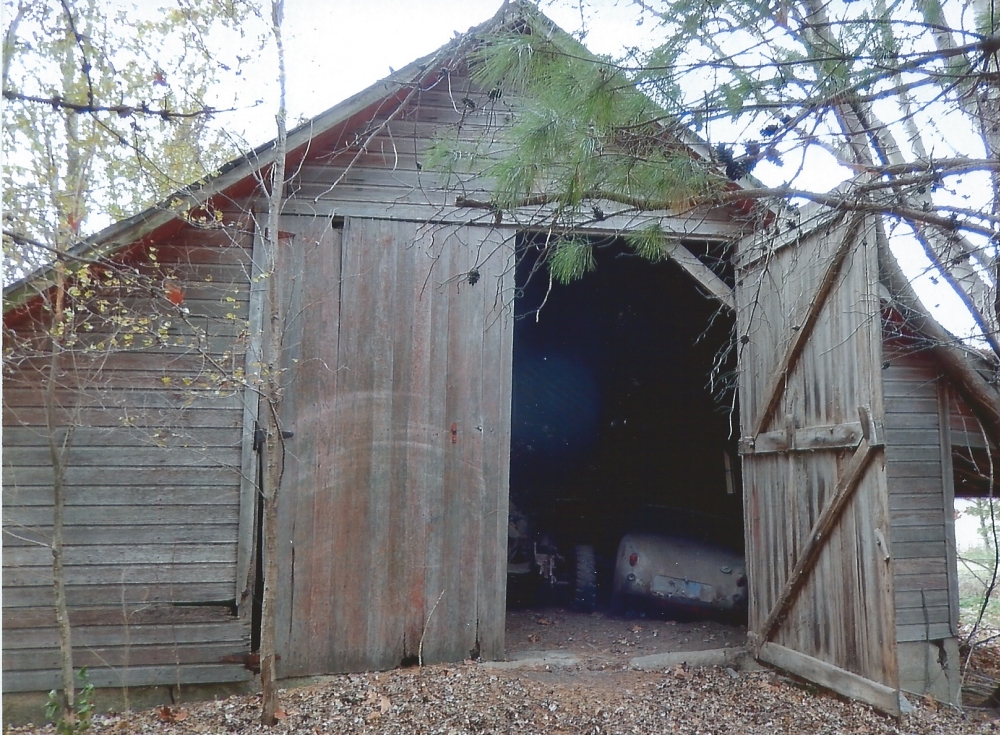 The 1960 Austin-Healey Sprite as found in the barn that’s 75 feet from my trailer.

A couple of weeks later I took a closer look at it and took some photos.

It has a one-piece fiberglass front end on it that I have never seen before. One question lead to another and they all added up to: What is it? And, who made it? I couldn’t find anything on the Internet. I did not know who made it or when it was made. I knew it was a commercially made fiberglass front due to the quality of it. I also knew that the Bugeyes were late 1950’s to early 1960’s cars.

But, I knew just the person to send my photos to: Geoff Hacker, Tampa, Florida.

Within a couple of days, Geoff attached some photos to an email. What a great surprise to find out that the fiberglass front on the Sprite was made by Kellison and later Allied. It’s the same Kellison company that manufactured my J-2 Coupe.

I never knew Kellison made this front end. But, Geoff Hacker knew! Many thanks Geoff.

The biggest surprise for me was that for 6 years, this car was within 75 feet of my trailer and I never knew the car or building even existed. 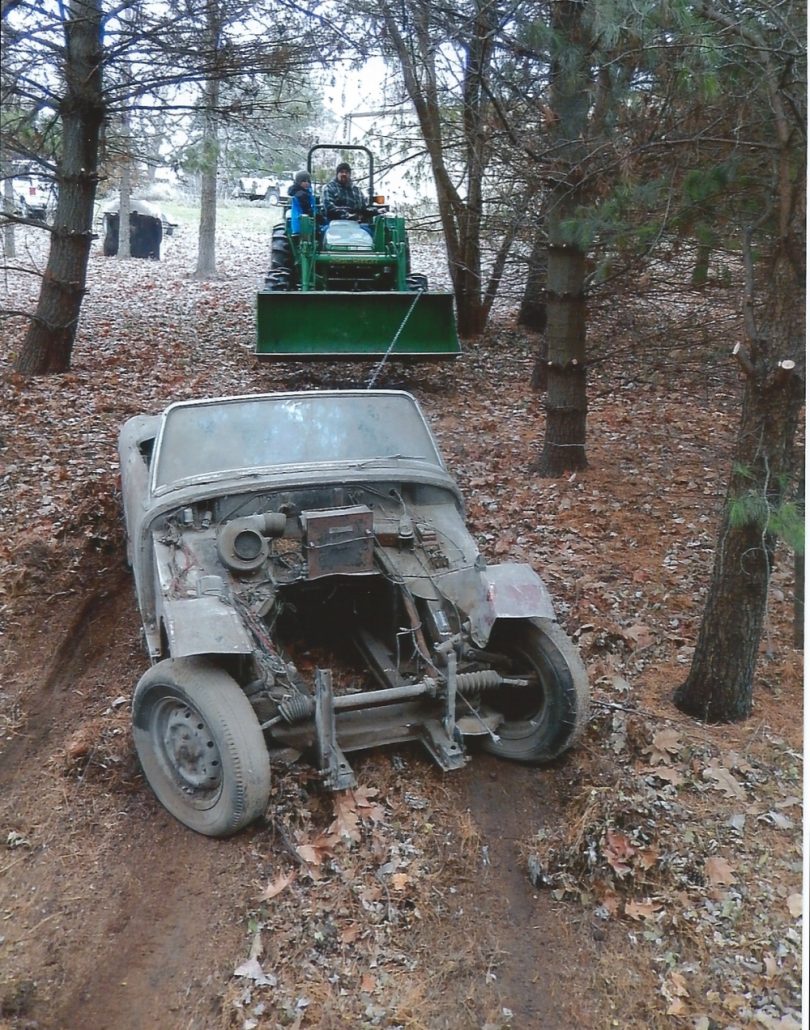 I thought it would be easy pulling the Bugeye out of the barn. Yes, it would be easy if all four tires had air and they all rolled. Two of the tires still had some air after 23 years. Only one rolled. The other three have the brake shoes rusted to the drums. Moving a little car with two flat tires and three that don’t roll is very difficult. It seemed as if the little Sprite didn’t want to leave the barn, it’s home for the past 23 years. The fiberglass front is shown leaning against a tree in the upper left of the photo. It was taken off to make moving, loading, and tying the car down easier. 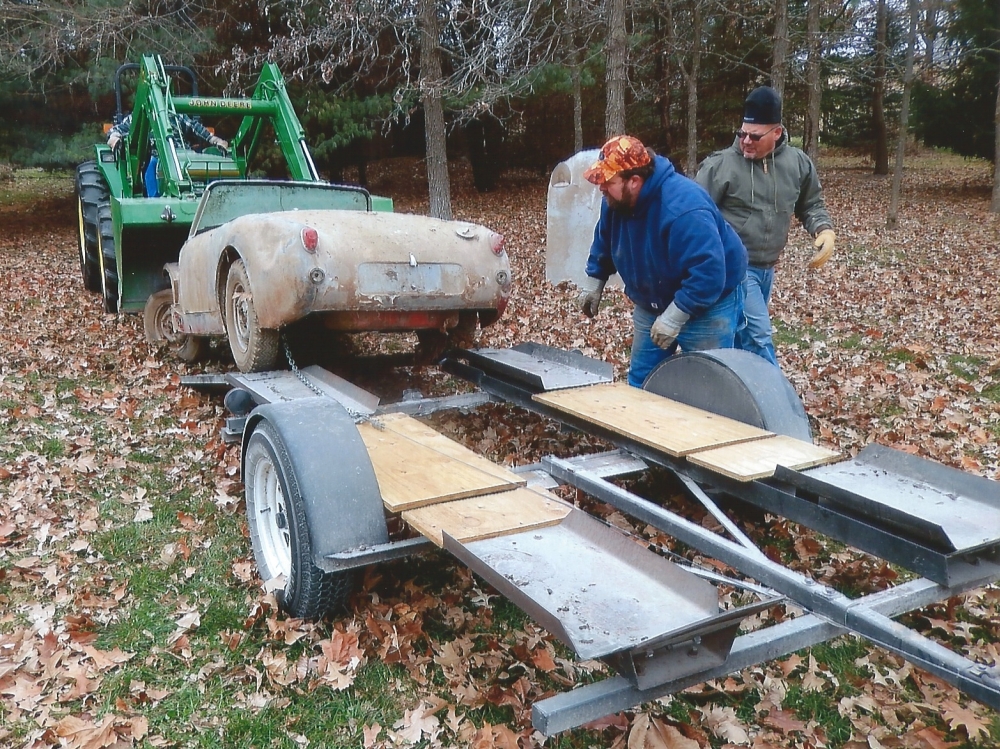 The Bugeye moved like a 1,500-pound boat anchor when trying to slide it up the ramps. The solution: 1 John Deere, 1 winch, 4 men, and a dog. 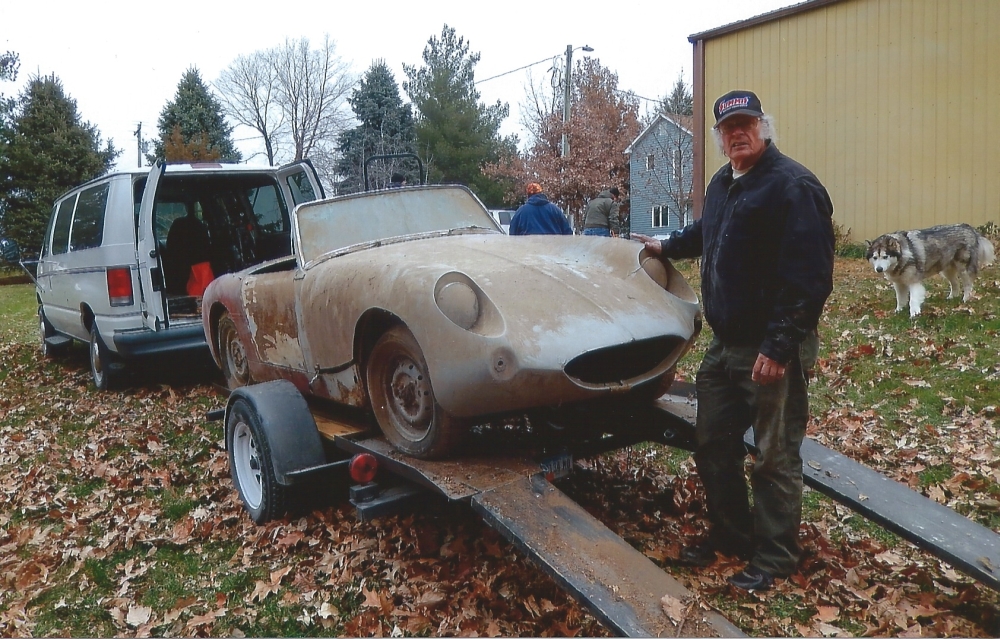 FOR THE FUTURE: The Kellison front end will stay with me. The front end has a few cracks but they are easily repairable. A couple of small older repairs will have to be re-done. These are simple fiberglass fixes. The 1960 Sprite body is up for sale (cheap, $500 or best offer) and I’ll deliver for $1 per mile. I have the correct and clear Iowa title. The body could be easily restored, but, not by me. It has the top bows, side windows, and now out of necessity 4 new tires. I’d rather purchase a nice good running Bugeye and install the Kellison front on it.

Great thanks goes to Bob Peterson for sharing this story.  It’s neat to see how these fiberglass companies were building more than just bodies – they were giving creative folks out there an affordable way to choose an alternative in design – sometimes for just the front end of their production car.  Very interesting.

And I should add that Bob has since sold his Sprite (not the Kellison fiberglass front end) – in just the short time between when I received this story and today.  I’m sure it’s off to a great new home.