In the mid 1950s, the name Bugatti still evoked the greatness of its prewar years, and many a car enthusiast wanted to see this marque return to the forefront of design.  A well-known French artist – James-Jacques Brown (born 1918 – click here to learn more about him – in French so you will have to translate) – took on this task and built two fiberglass-bodied sports cars on Bugatti 1930s T57 chassis in the mid 1950s.

Remember…in the mid 1950s, fiberglass was still the new wonder material and cars made from it were seen as special – just as carbon fiber cars are seen today.  It was the perfect material for a sculptor such as Jame-Jacques Brown to use too.

I came across this interesting piece of information via good fiber-friend Paul Sable who clued me in on an interesting Trend book from 1957 called “Cars of the World.”  Let’s see what this magazine had to say about this special-bodied Bugatti back in 1957. 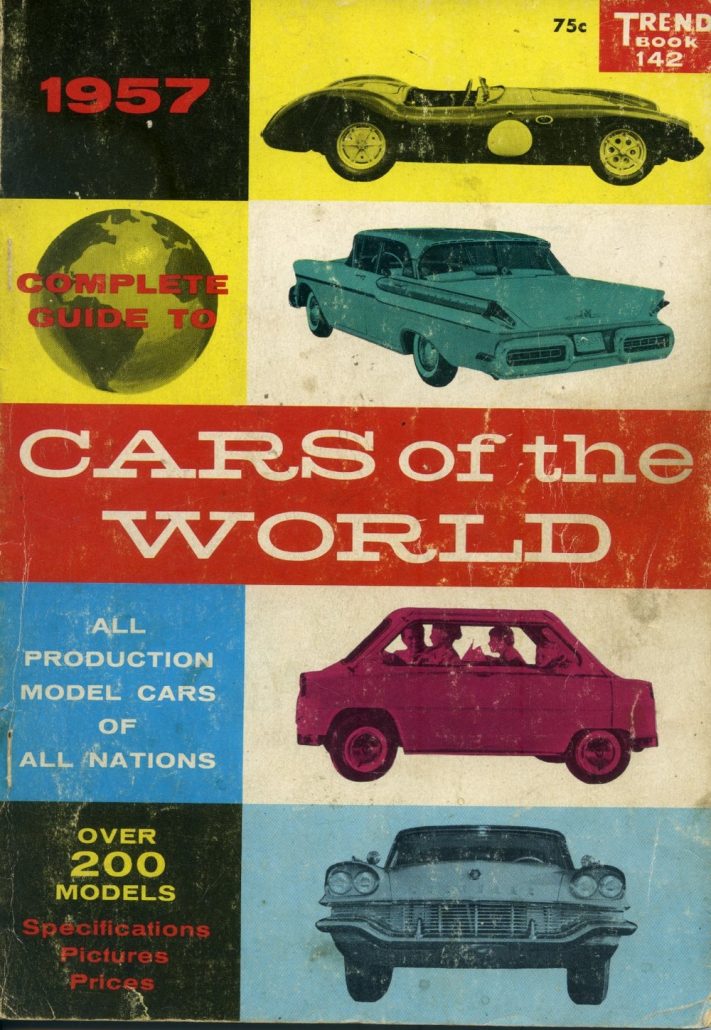 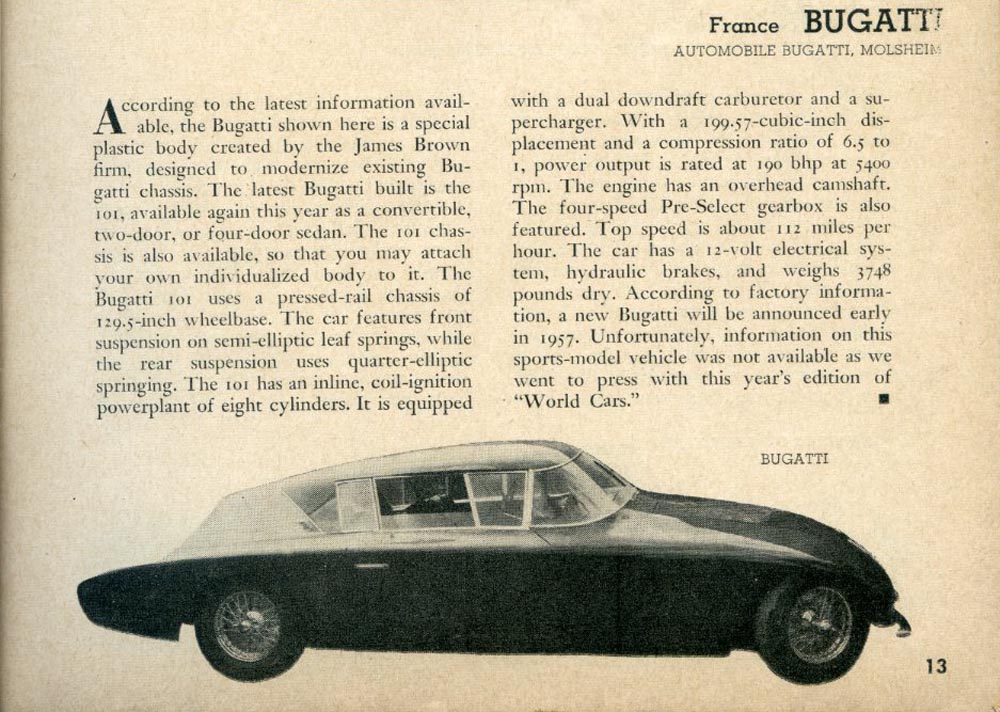 According to the latest information available, the Bugatti shown here is a special plastic body created by the James Brown firm, designed to modernize existing Bugatti chassis.  The latest Bugatti built is the 101, available again this year as a convertible, two-door, or four-door sedan.

The 101 chassis is also available, so that you may attach your own individualized body to it.  The Bugatti 101 uses a pressed-rail chassis of 129.5 wheelbase.  The car features front suspension on semi-elliptic leaf springs, while the rear suspension uses quarter-elliptic springing.

The 101 has an inline, coil-ignition powerplant of eight cylinders.  It is equipped with a dual downdraft carburetor and a supercharger.  With a 199.57 cubic inch displacement and a compression ratio of 6.5 to 1, power output is rated at 190 bhp at 5400 rpm.

The engine has an overhead camshaft.  The four-speed pre-select gearbox is also featured.  Top speed is about 112 miles per hour.  The car has a 12 volt electrical system, hydraulic brakes, and weighs 3748 pounds dry.  According to factor information, a new Bugatti will be announced early in 1957.  Unfortunately, information on this sports-model vehicle was not available as we went to press with this year’s edition of “World Cars.”

After reading this information, I was curious if I could find out more about this car, and I was pleased to learn that the car still exists.  Let’s check out some photos first, and then jump into the story posted on a website in Greece titled “Historic Automotive Promotion” which has more history about this Bugatti. 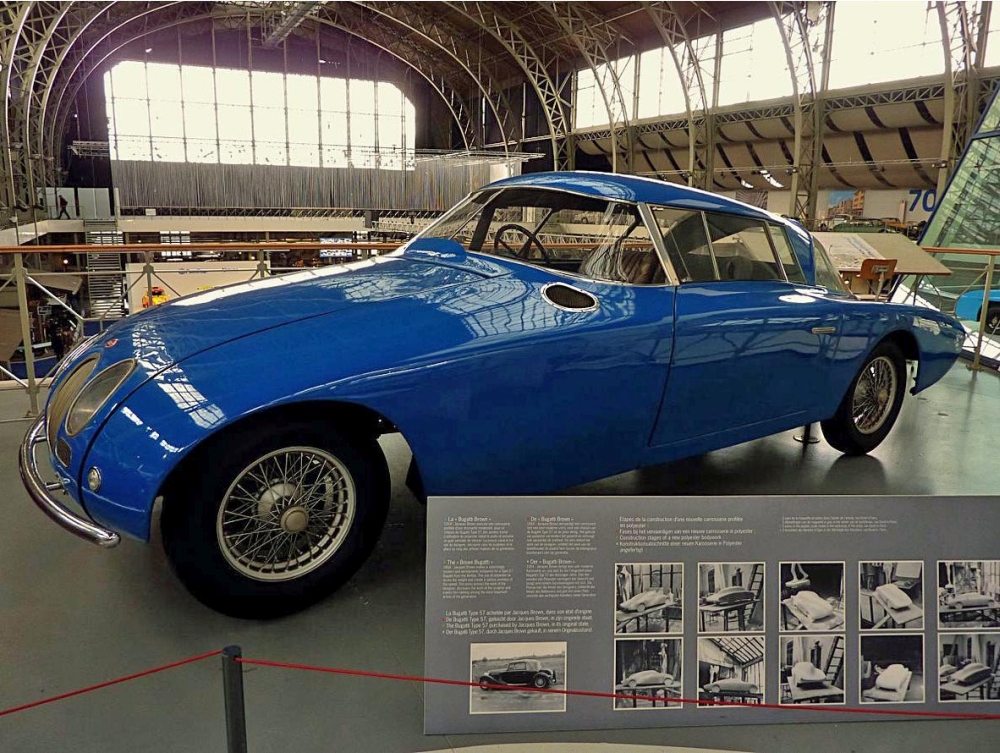 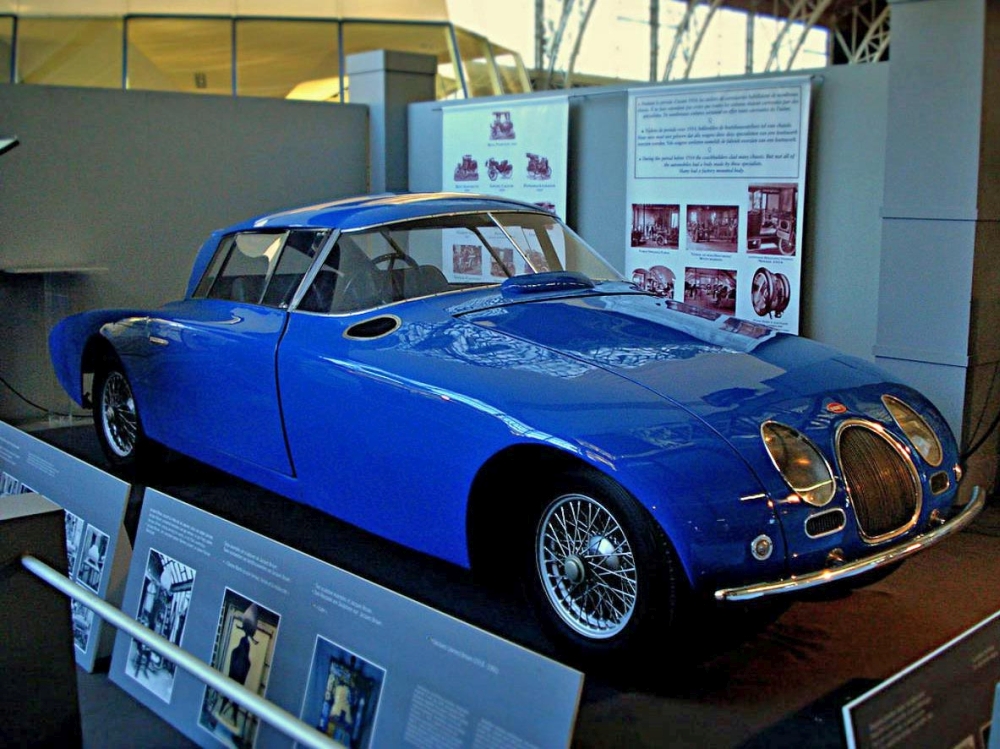 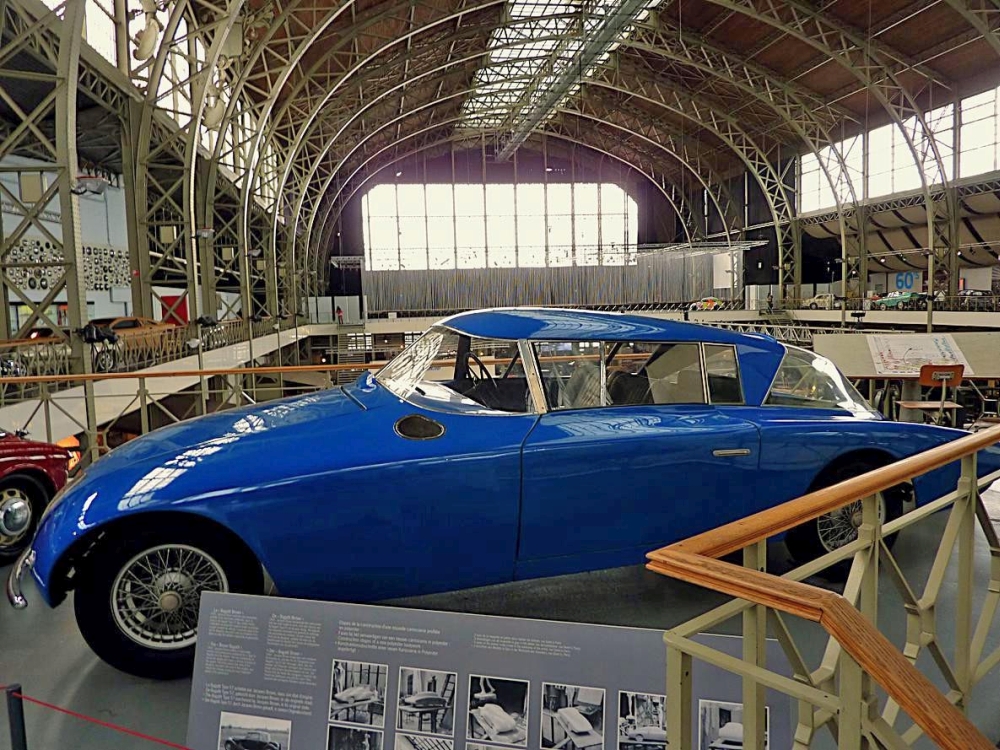 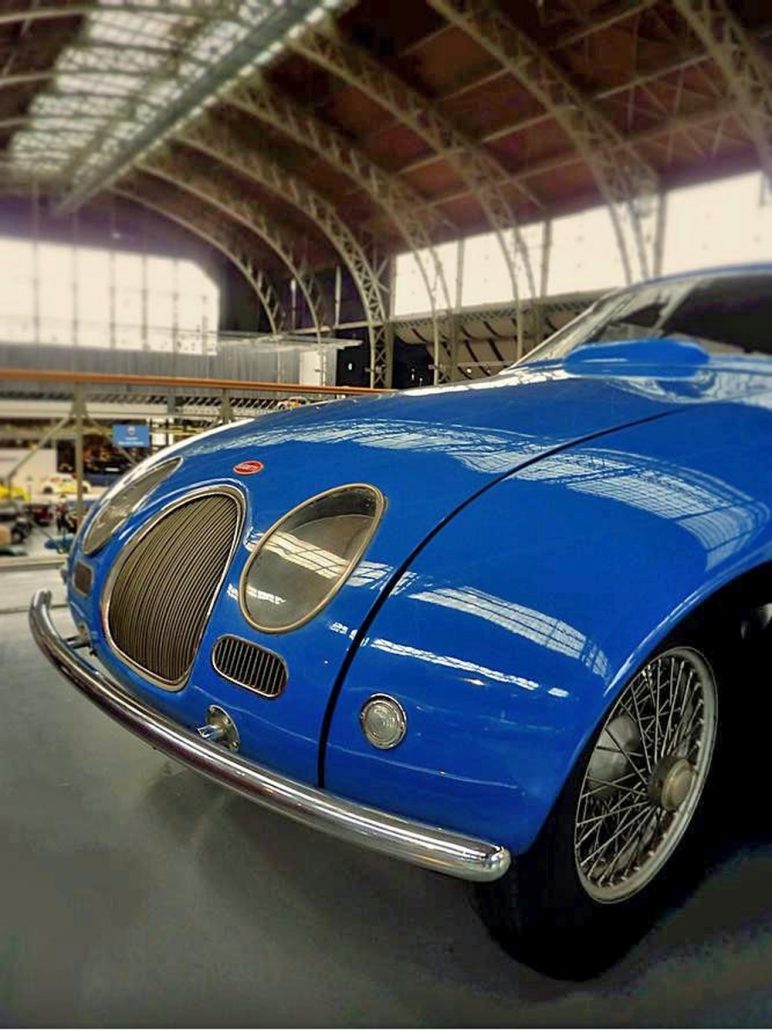 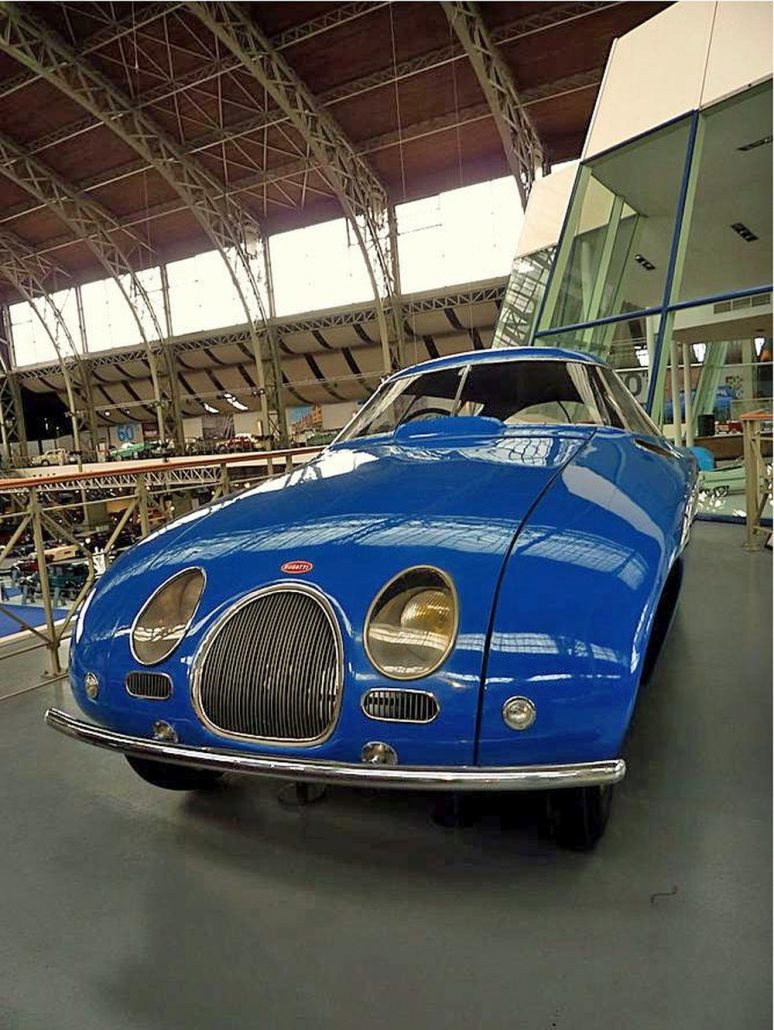 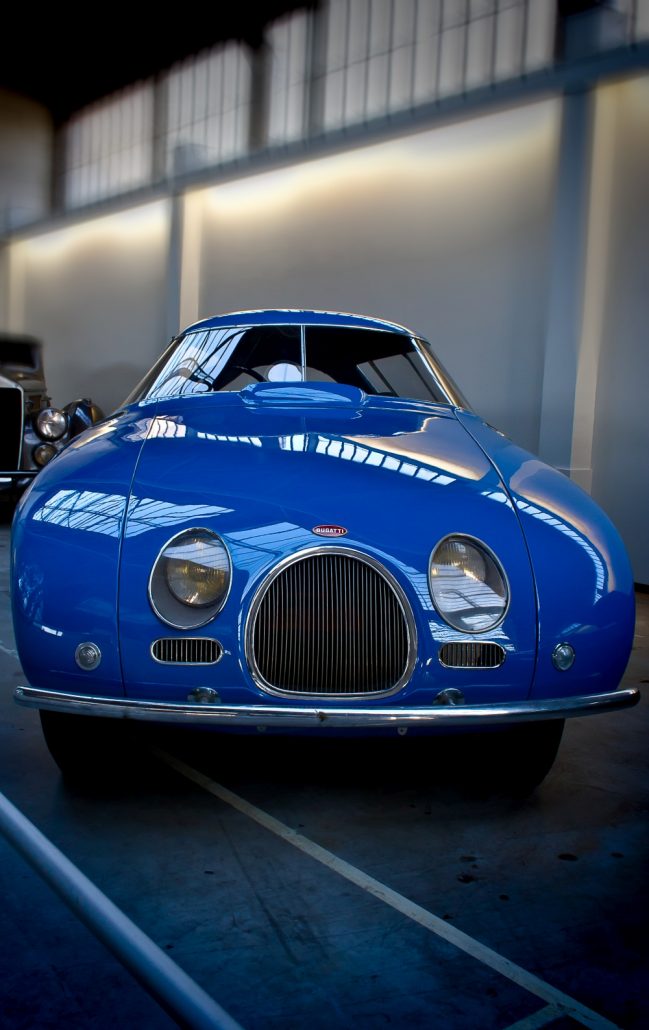 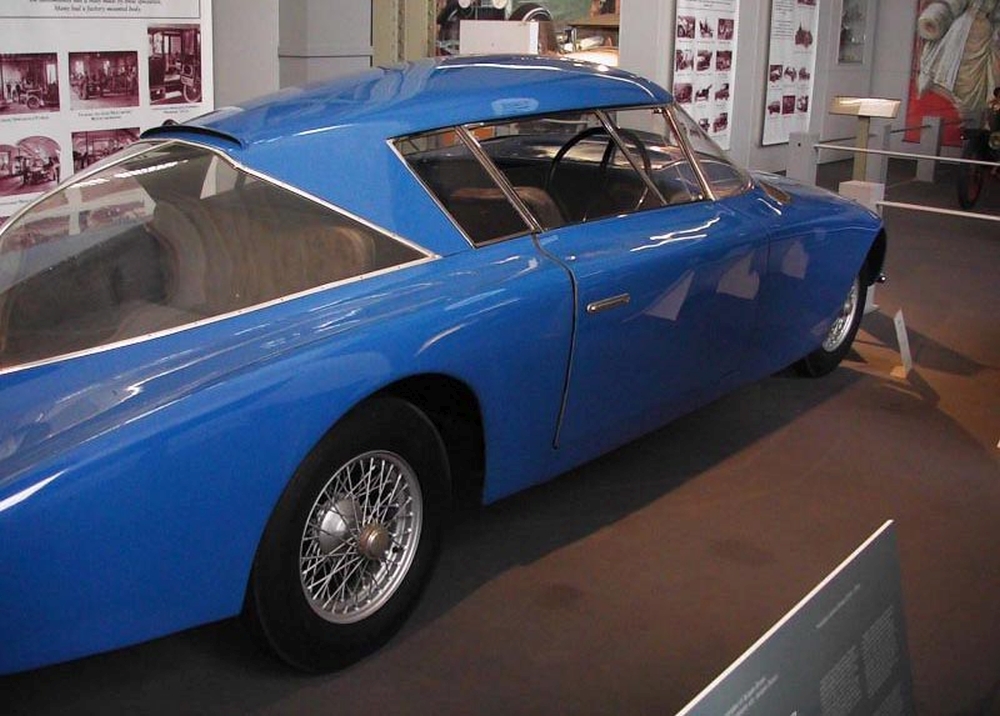 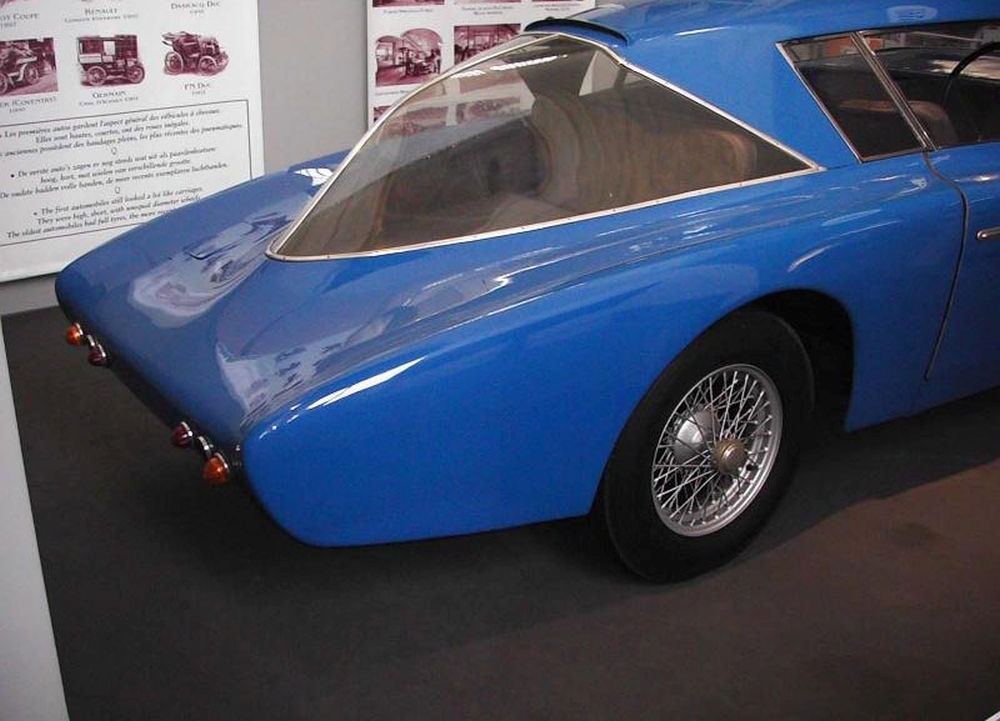 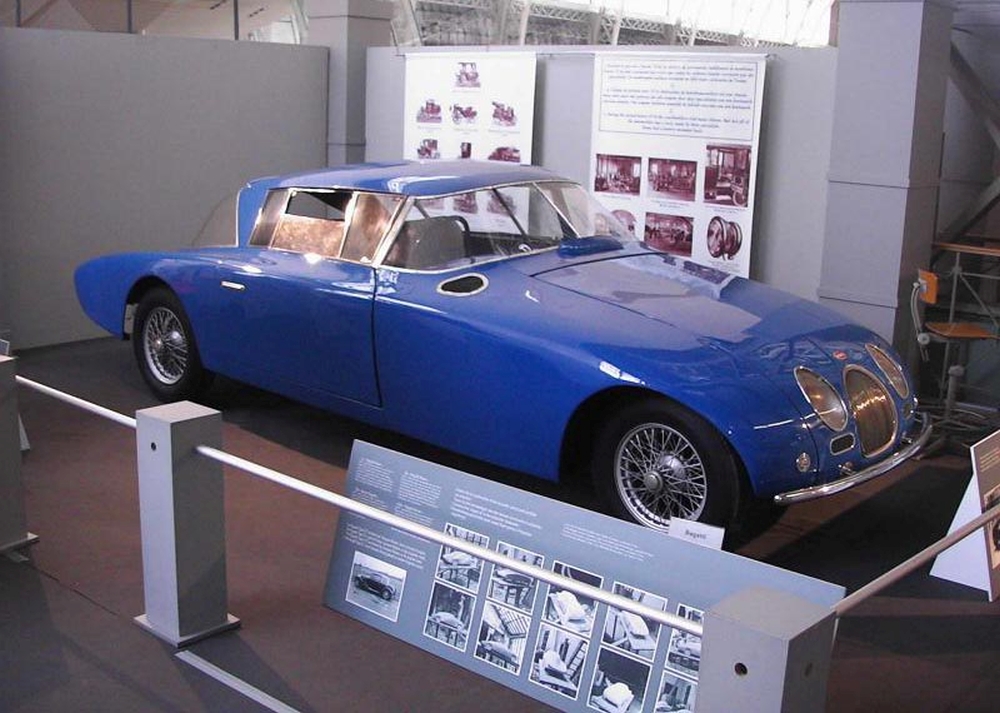 This special creation is built on a pre-war chassis-type 57 by sculptor James Brown, the futuristic body for the time is fiberglass (as contemporary Corvette) and allows a reduction of 250 kg; the wheels are 16 inches instead of 18 inches.

The sculptor Jacques Brown rebodied the old T57 chassis in a more aerodynamic form using polyester for the body panels, thus saving weight and increasing performance. His vision was highly praised at the time, but probably not so by marque purists more than half a century later.

Unfortunately for him there were no takers. The body remained on the T57 chassis (probably #57723) until the 1980s, but is now replaced with a VW floorpan.

James Jacques Brown is a French sculptor born in 1918 in Paris.He studied law and received a law degree from the École Libre des Sciences Politiques and became official at the Ministry of Finance from 1942 to 1945. At that time, he met Edith, who became his wife, they have three children: Frederick, Caroline and Thomas. After the Liberation, he began an artistic career.

In 1958 and 1959, Rodolphe Stadler Gallery in Paris organizes him two personal exhibitions. And the following year the Mayer Gallery in New York presented a set of his works.

He concludes his artistic activity in the late 1980s, before disappearing in 1991.

So if James-Jacques Brown made two and we’ve located one….where’s the lost fiberglass Bugatti?  Something for our European Forgotten Fiberglass devotees to uncover in a future issue for us to enjoy.