Lost cars of fantastic design – how much better can a story be?  And you might be the one to find this missing car.

In the past many years, we’ve been fortunate to find cars hidden away for decades, and because of our good fortune we believe that you can do the same.  Part of the reason is that very few “special” cars ended up in junkyards.  There were people just like us that would save them from being destroyed time and time again.  Sometimes we find a car that is not in good condition, but rarely do we find that a car was destroyed (unless by fire or accident).  So there’s hope that we can find this car too.

Today’s story is from veteran writer, researcher, car collector and friend Glenn Brummer.  It’s a story about a special guy, a special family, the team who built it, and a special car.  My favorite kind of story.  So without delay, let’s have Glenn Brummer take it away 🙂 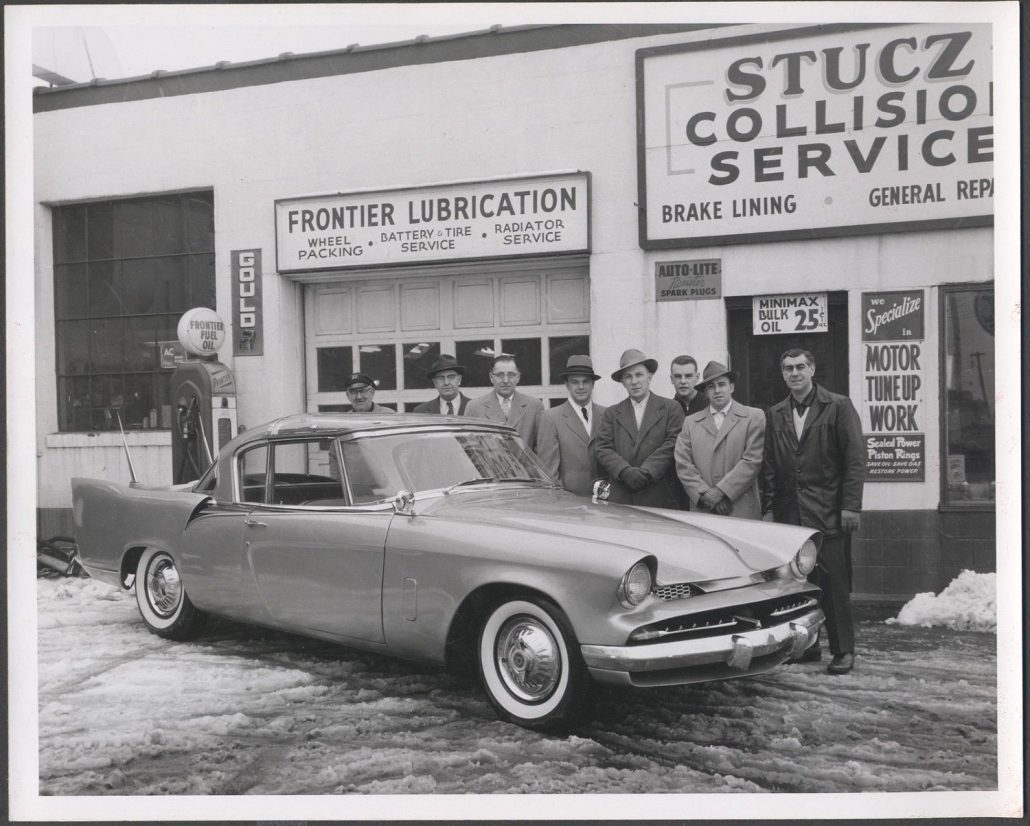 Henry and his team…Circa 1958 – In front of the Stucz Collision Building.  The man the the far right is Henry (Hank) Donald Canazzi.  The older gentleman at the far left is Hank’s father, Anthony ‘Pop’ Canazzi.

Entrepreneur, inventor, business man, designer and multiple patent holder are just a few of the words that describe Henry Donald Canazzi.  Born in Buffalo, NY in 1917, he went to Lafayette High School where he played basketball which may have played a role in making him a competitive individual.  ‘Hank’, as his friends called him, had a love for horses and could be seen frequently riding the trails that once wound around Buffalo.

His father, Anthony ‘Pop’ Canazzi, was a tugboat engineer and worked on the construction of the Peace Bridge between Buffalo, NY and Fort Erie, Canada during the years 1925 – 1927.  So, Hank grew up around boats and developed his ‘water-sense’ on the tricky, unpredictable, Niagara River.

Before World War II started, Hank went into a business partnership selling motor yachts and marine accessories to wealthy clientele in the Buffalo area.  When the War broke out, he joined the United States Navy and found himself stationed in Key West, FL, running 73’ sub-chasers.  The Navy found Hank’s engineering and design skills useful as he created a new motor for use in PT boats, a new surface torpedo, as well as a new more efficient design for a boat hull.

After the War, Hank returned to Buffalo where he dissolved his partnership and established his own marine retail business on Niagara Street with a gas station, docking and boat storage areas.  The second floor of the main building was large enough to accommodate his office and space for selling unfinished furniture.

Even with all of the hustle and bustle of the marine business, Hank put his creative mind to work on his 1948 Buick convertible. What if, he thought, I create a clear bubble top for my convertible?  So, he set about creating a mold in the same general shape of his convertible top, only smoother, and heated a sheet of Plexiglas until it took the shape of the mold, let it set and then trimmed the sides to allow the windows to roll up.  Fasteners were then fabricated and presto, he had a clear bubble top for his Buick. 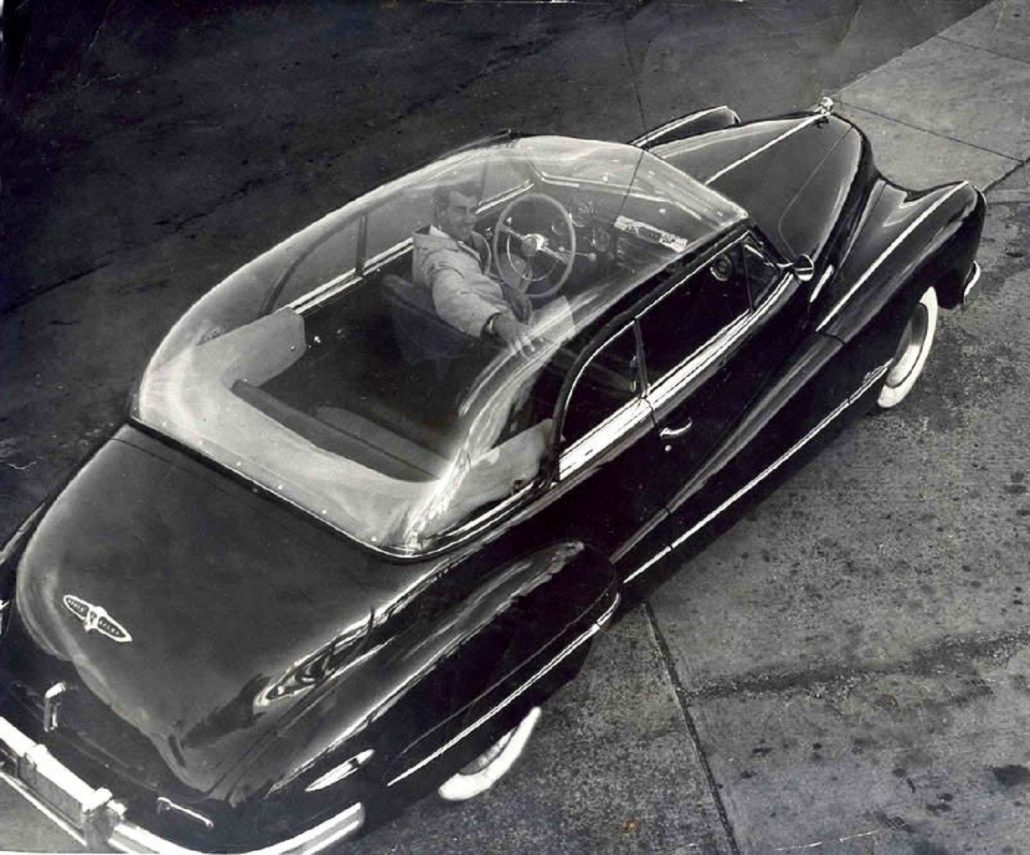 Hank Canazzi and his Bubble-Top Buick

It caused quite a stir in and around the Buffalo area to the extent that someone in the Harry S. Truman administration was aware of the car and contacted Hank to see if they might use the car for a forthcoming visit from Mr. Truman.  That was probably in October of 1949 when Harry Truman was to stop in Buffalo as a part of his whistle stop tour.  Hank, of course said ‘yes’ thinking all the while that he would be driving the car with the President.  Alas, when they arrived, a secret service agent took the wheel and Hank followed in another car with other secret service agents.

By about 1953, Hank came up with the idea of selling plans for wood boats of his design and Custom-Craft was born.  The plans led to wood boat kits and he became a pioneer in the mail order business for plans, patterns, frame kits, hull kits and kit boat manufacture. 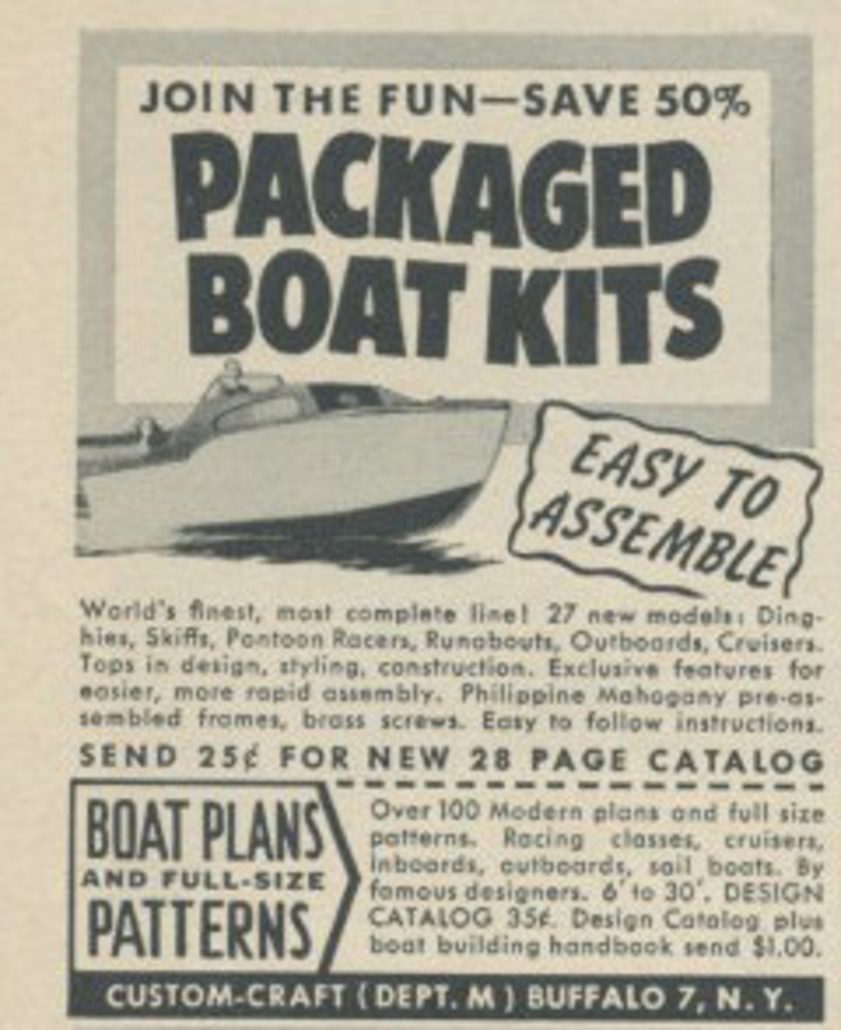 Henry Donald Canazzi and his wife, Jane Ellen Canazzi had a family – son Craig and a daughter Kim.  They remember well the competitive nature of their father and their family boat called ‘The Boo’.  Hank had an old inboard ChrisCraft wooden speedboat that he had lengthened and installed some high performance engines under what appeared to be seats.  Family outings on the Niagara River proved to be white knuckle events at times when other boaters pulled up close by and wanted to race – Hank always let them take the lead and then give The Boo full throttle and blow on by leaving the challenger in their wake.

Long about 1957, Hank began thinking about fiberglass as a viable material to build boats.  He was aware of Bill Tritt and his Glasspar boat business that had been building fiberglass boats since 1947.  More and more boat manufacturers had been switching from wood to the more durable and almost maintenance free fiberglass construction.

So, to see just how fiberglass works, Hank decided to start with an automobile.  He either had or acquired a 1953 Studebaker Commander hardtop and began designing a custom car around this vehicle.  Once he had his design completed, he began enlisting knowledgeable help for the actual construction.  For the engine, he got Bill Southwood, who built a 388 cu. In. Cadillac V8 motor with 10 to 1 compression ratio and set it up to run on butane fuel. 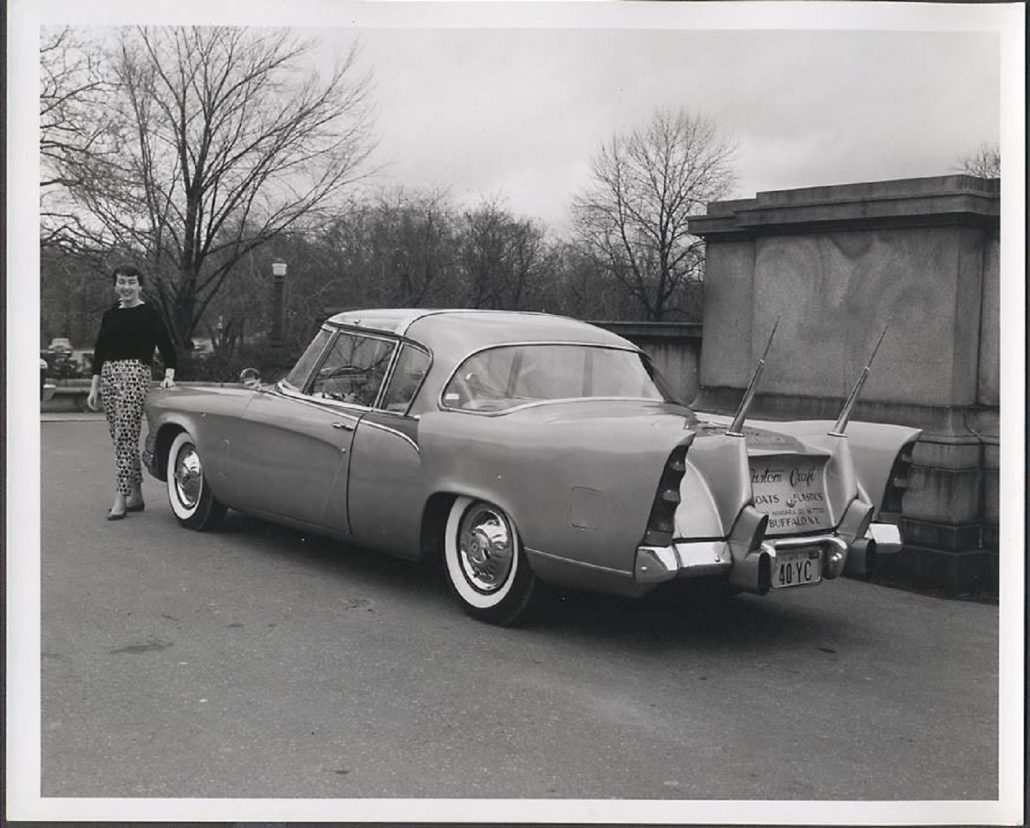 Why butane, is not known, but butane boils at 32 degrees F and with the cold winters in Buffalo, propane might have been a better choice because it boils at -44 degrees F.  In any case, butane is a clean burning fuel and perhaps there was a plentiful supply in the Buffalo area.  For design detail and plastics, he used Norman Wirtz who is probably responsible for the lift-off Plexiglas roof section and the one-piece wrap-around windshield as well as other details.  While the use of Plexiglas for a windshield is probably not a good application for this material, it is nonetheless, innovative and much less expensive than having a windshield cast in glass.

The upholstery work was done by the Parker Co. which curiously may have included a telephone (shown in some of the pictures).  Daughter, Kim, doesn’t recall if this was a working phone or not, but this writer is guessing that with the twin antenna’s on the trunk lid, one was for the radio and the other may have been for a ship-to-shore radio telephone. 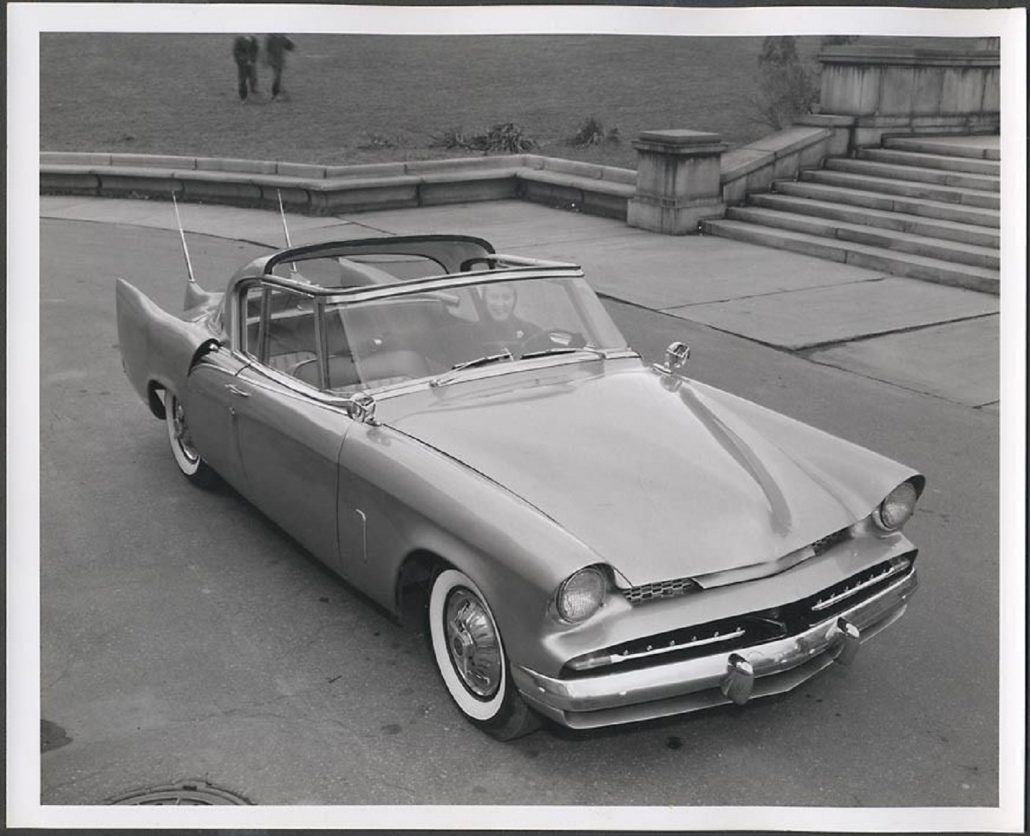 The molds for the fiberglass rear fenders, rear deck lid and grille surround are thought to have been created ‘in house’ at Custom Craft where Hank utilized five of his most talented craftsmen to devise forms for this process.  After the body was completed, it was taken to Stucz Collision for painting.  They applied the gold metalflake paint and black accent insert and did a superb job. 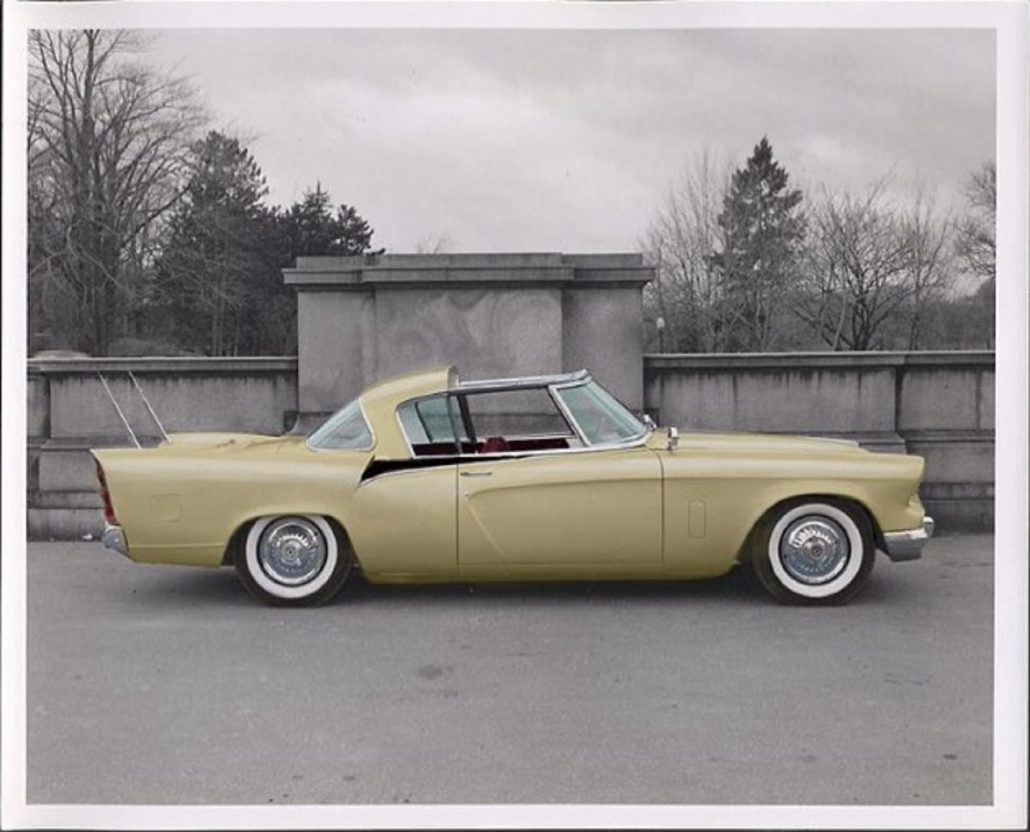 Colorization By Jeff Brummer – Thanks Jeff!

In 1959, Trend Books photographed the car and it appeared their book 189, Custom Cars Annual 1960.  In that publication, the car was called ‘The Golden Ray’ and the article is shown below. 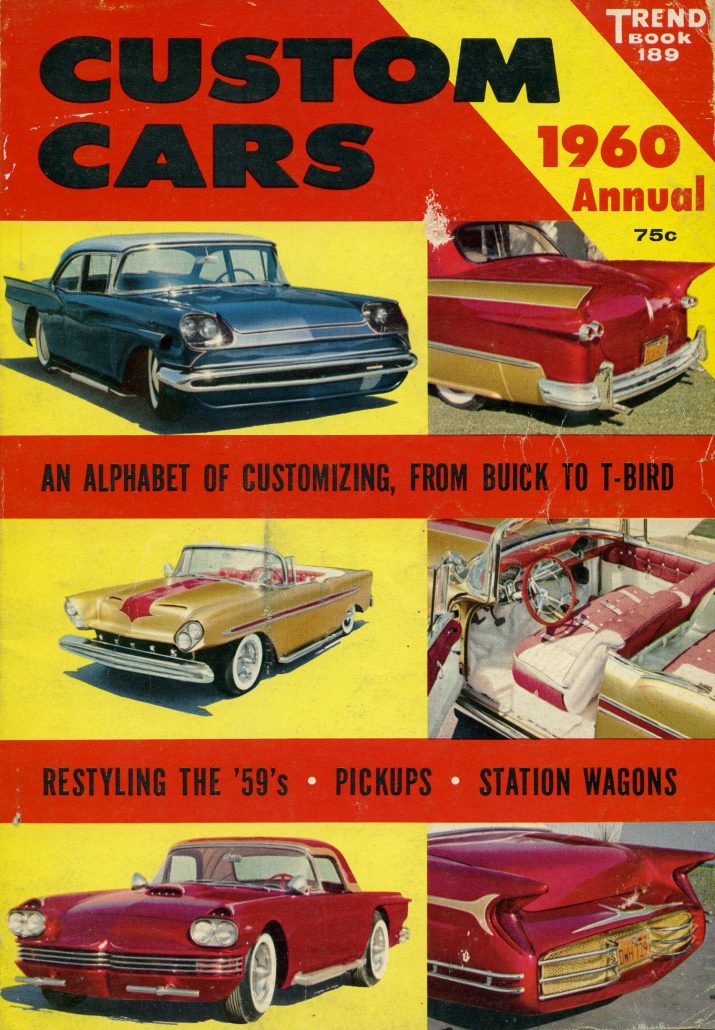 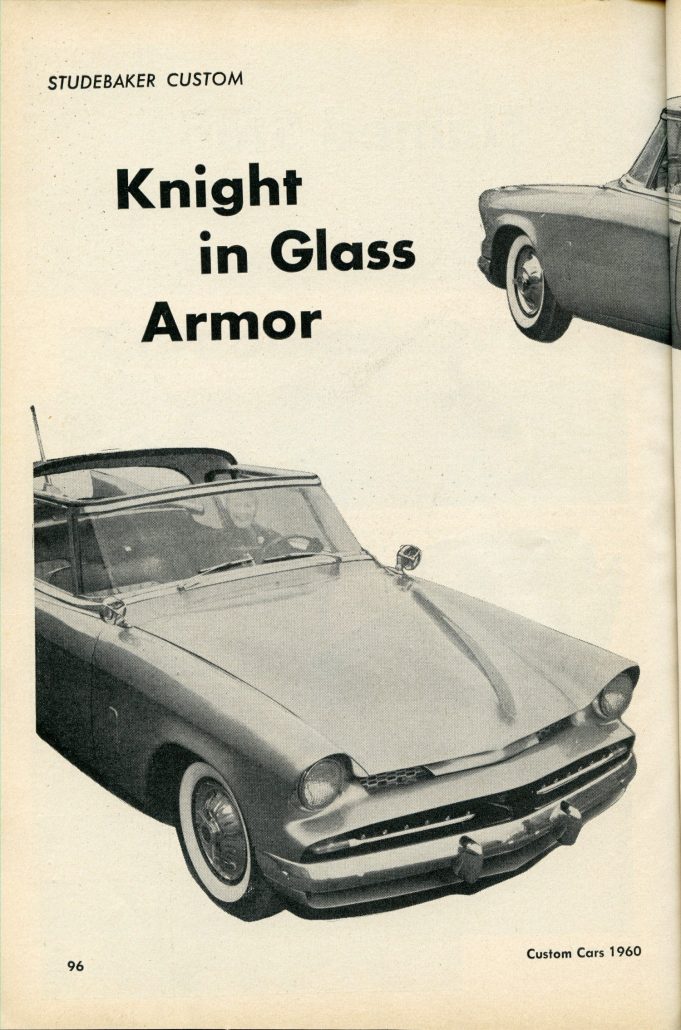 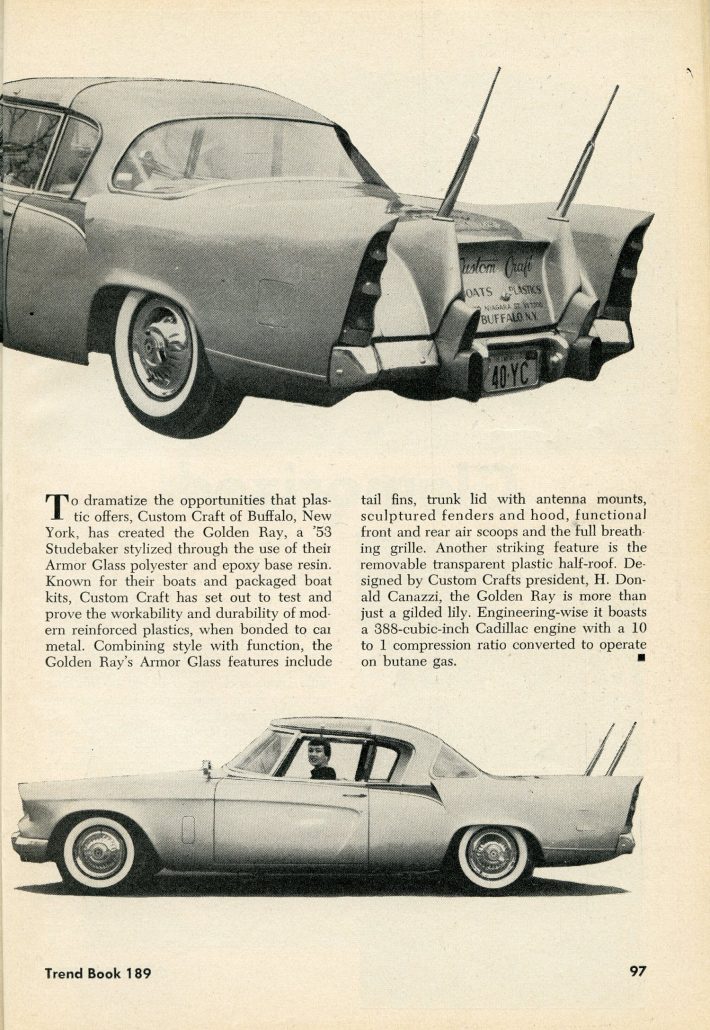 “To dramatize the opportunities that plastic offers, Custom Craft of Buffalo, New York, has created the “Golden Ray” – a ’53 Studebaker stylized through the use of their Armor Glass polyester and epoxy base resin. Known for their boats and packaged boat kits, Custom Craft has set out to test and prove the workability and durability of modern reinforced plastics, when bonded to car metal.

Designed by Custom Crafts president, H. Donald Canazzi, the Golden Ray is more than just a gilded lily. Engineering-wise it boasts a 388 cubic inch Cadillac engine with a 10 to 1 compression ratio converted to operate on butane gas.”

Hank enjoyed driving the car in and around Buffalo, NY for several years.  The car was then sold to an unknown individual and its whereabouts remains a mystery.  Henry Donald Canazzi went on to build an Oldsmobile powered Henry J and a Porsche powered VW Karmann Ghia.

Thanks to the following people who helped in making this article possible – Kim Canazzi, Craig Oty, Jeff Brummer and Sondre Kvipt of Kustomrama

Glenn also sent in additional photos and an ad, and these are shown below.  The ad for Hank’s company, Custom Craft, features a nice drawing of the Golden Ray. 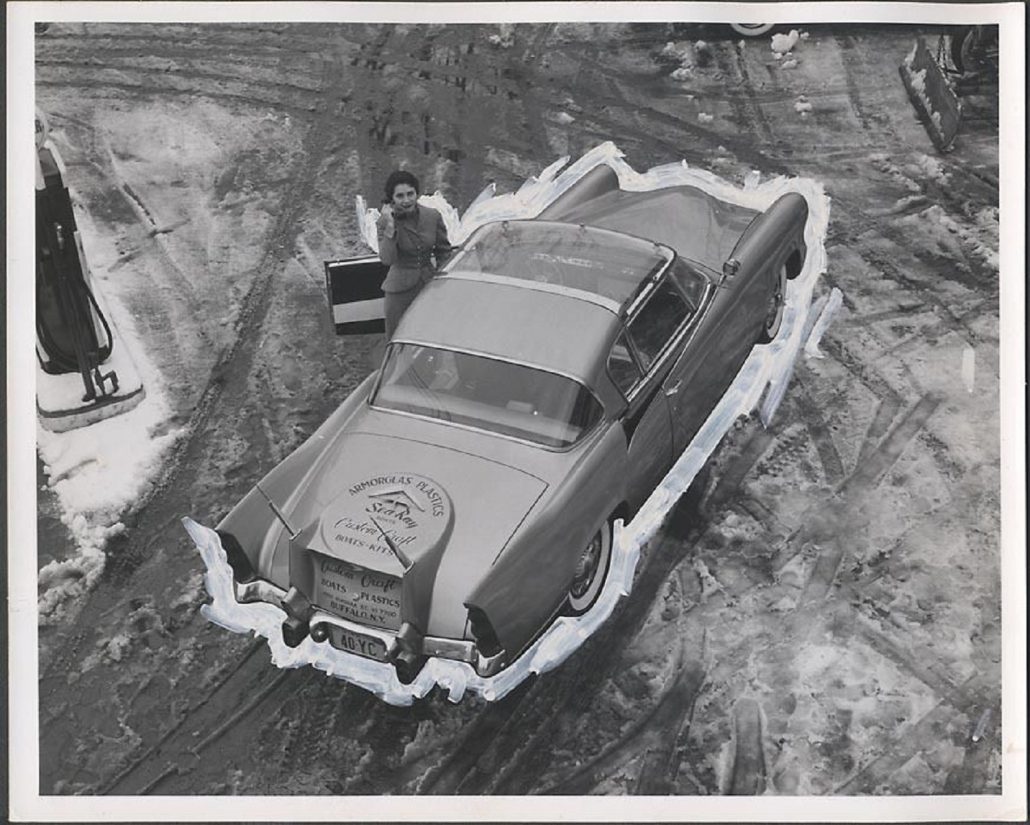 Shown here is Jan Canazzi – Hank’s wife. If you look closely she’s holding the signature car phone that was installed in the Canazzi. 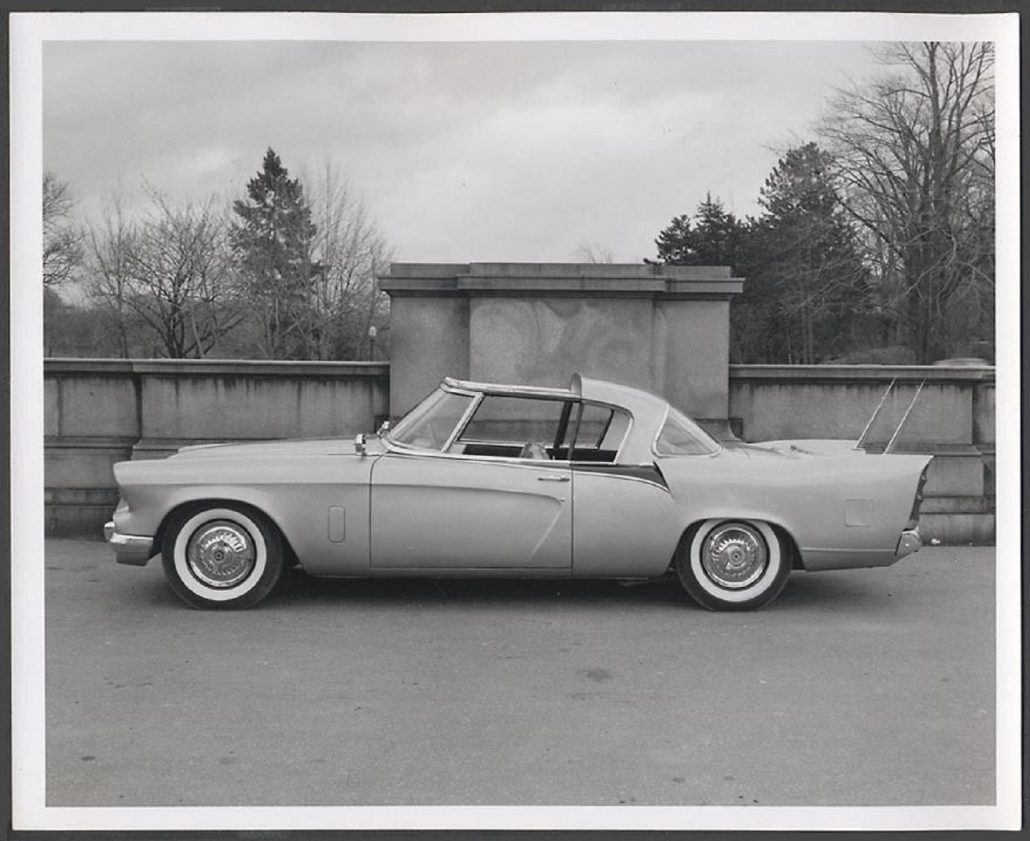 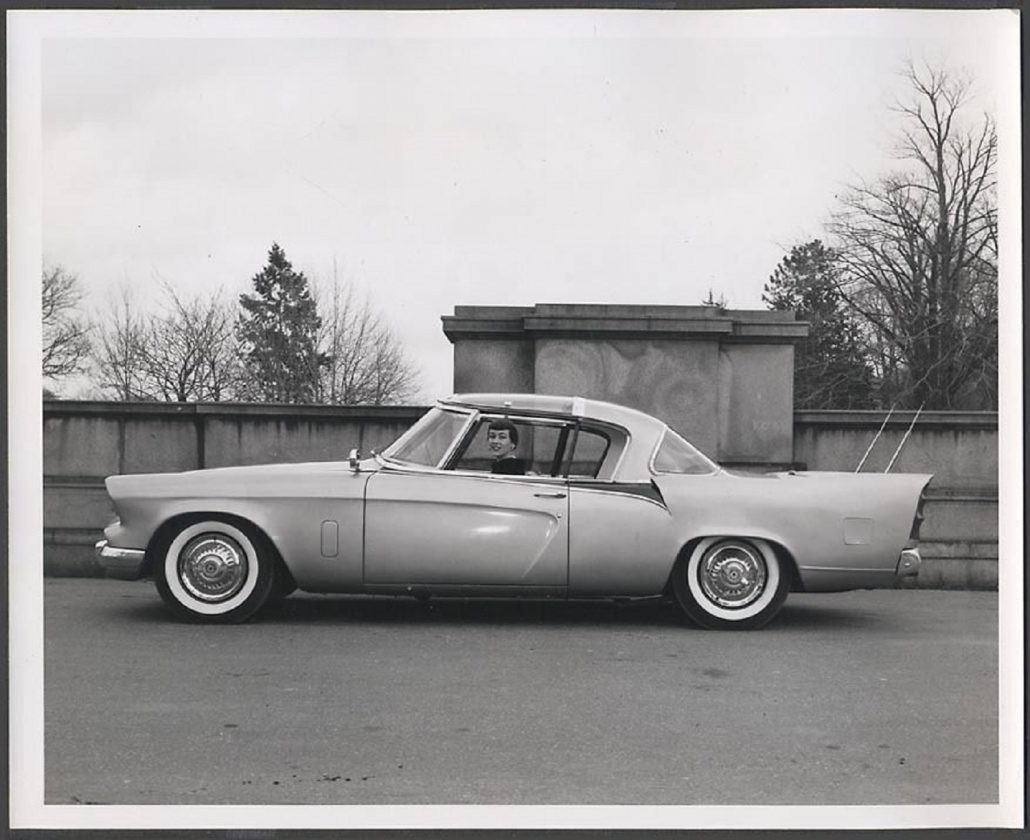 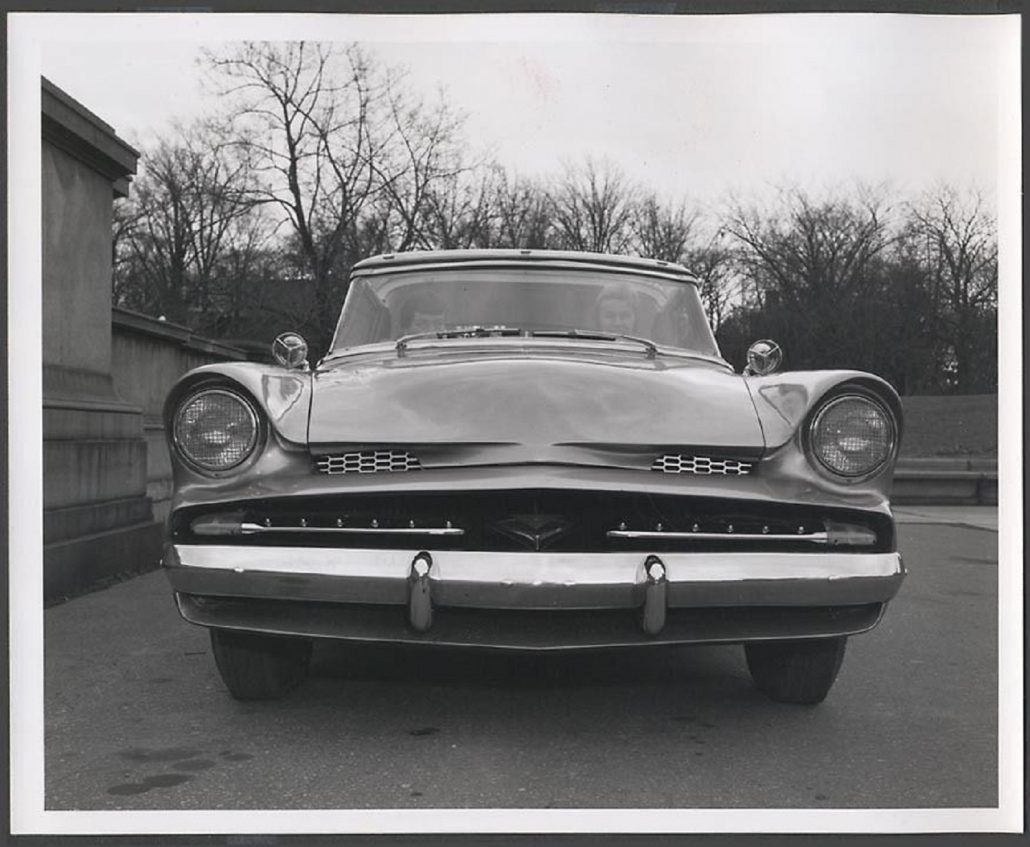 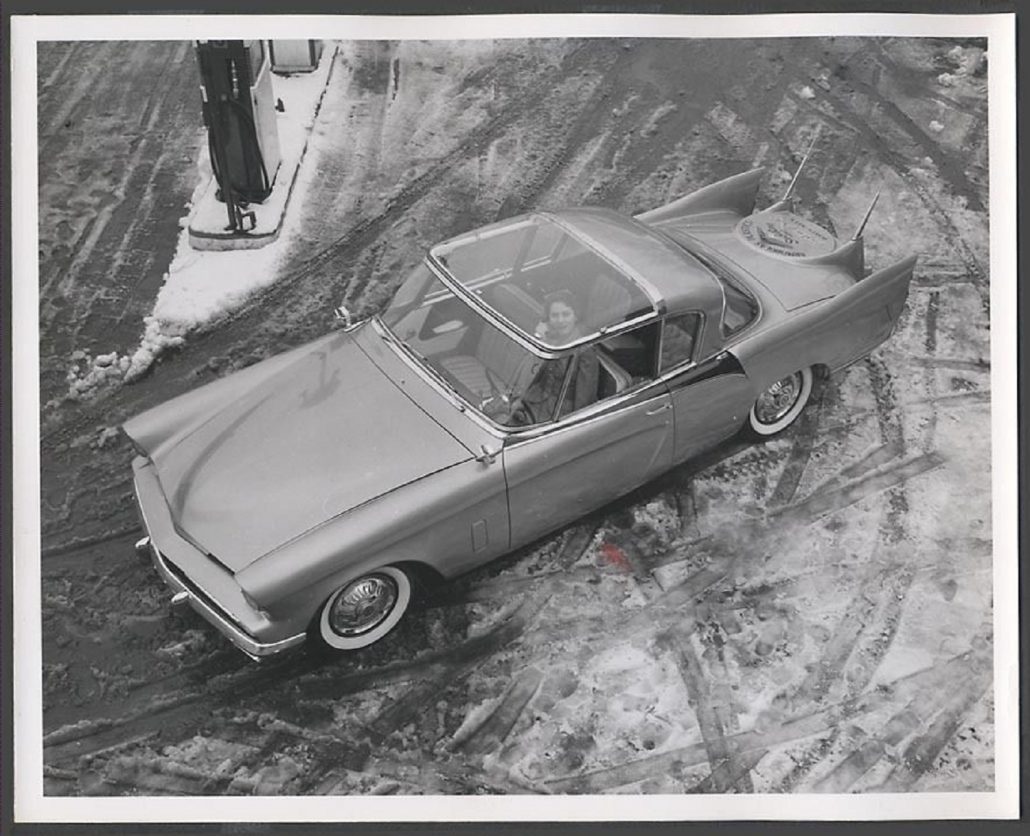 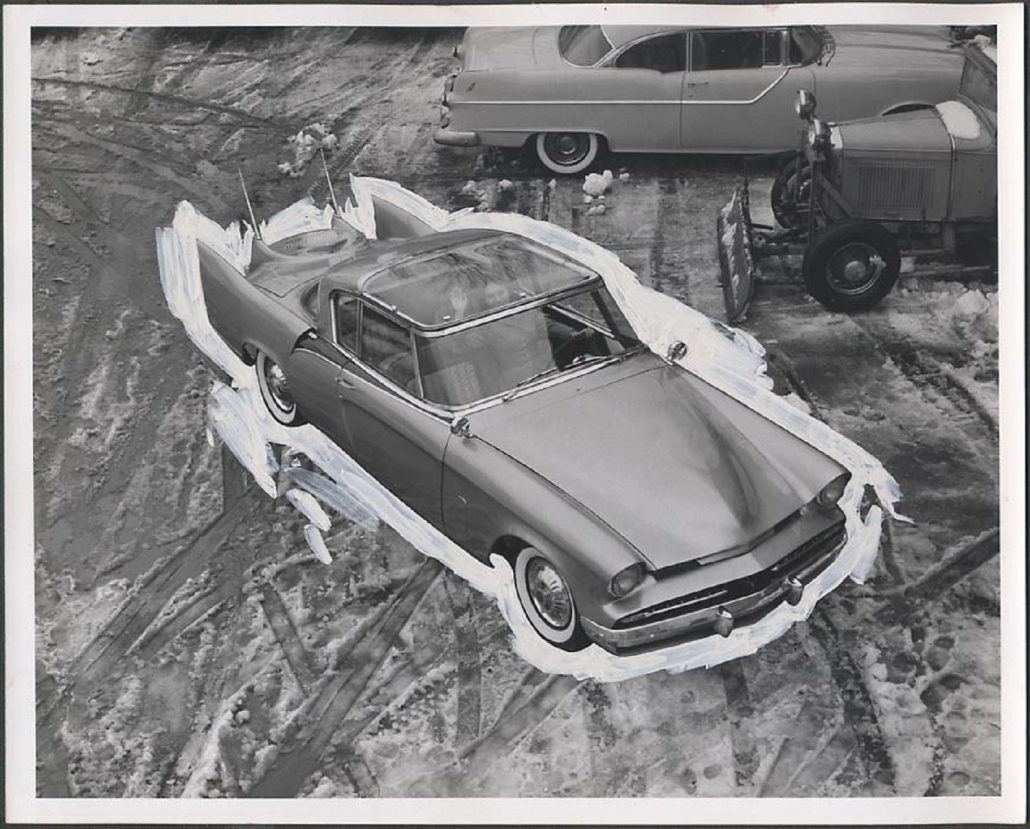 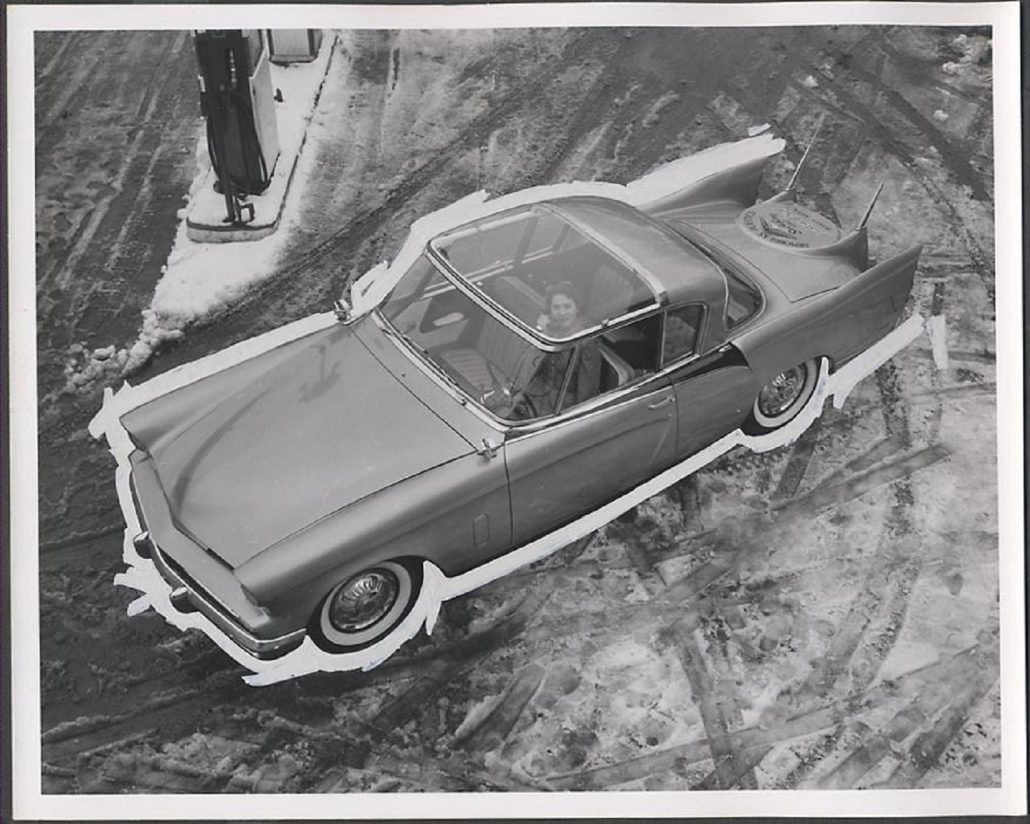 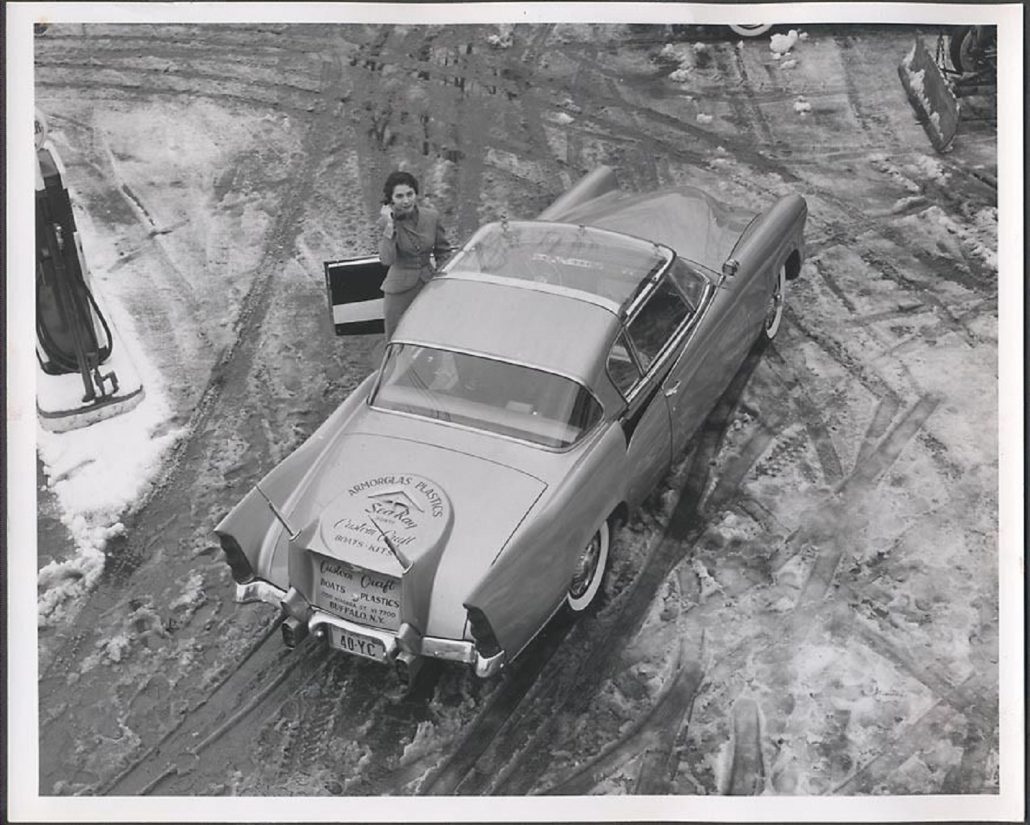 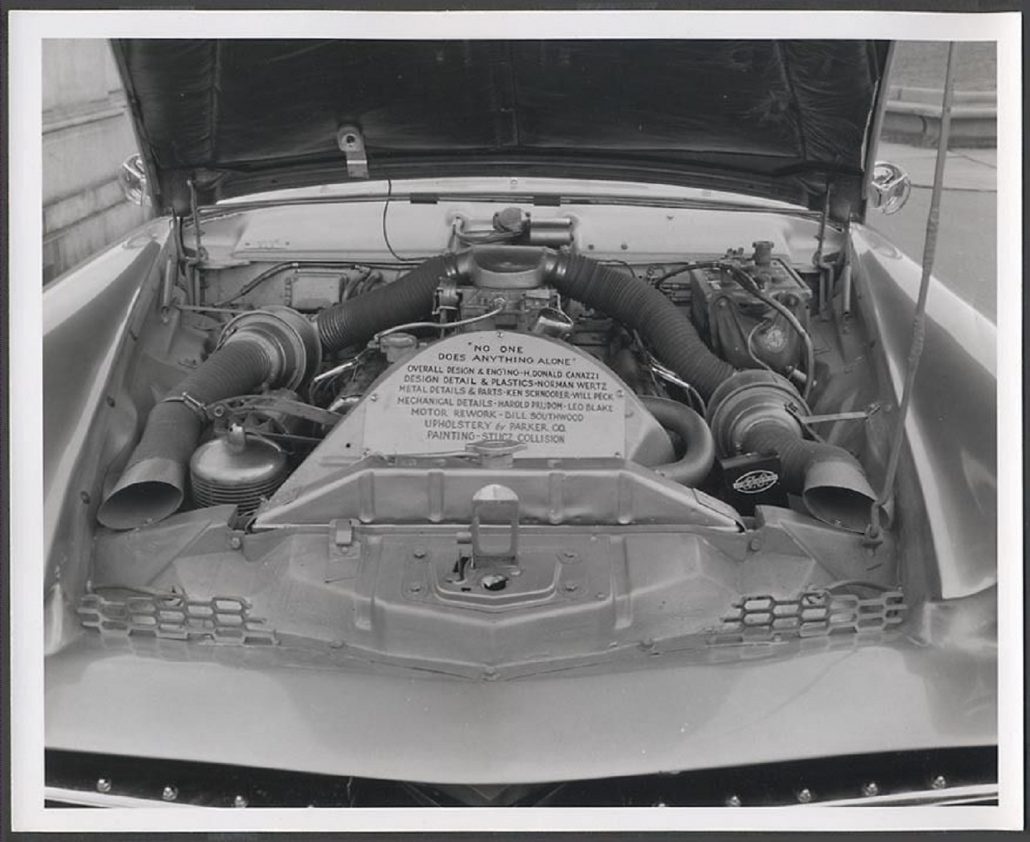 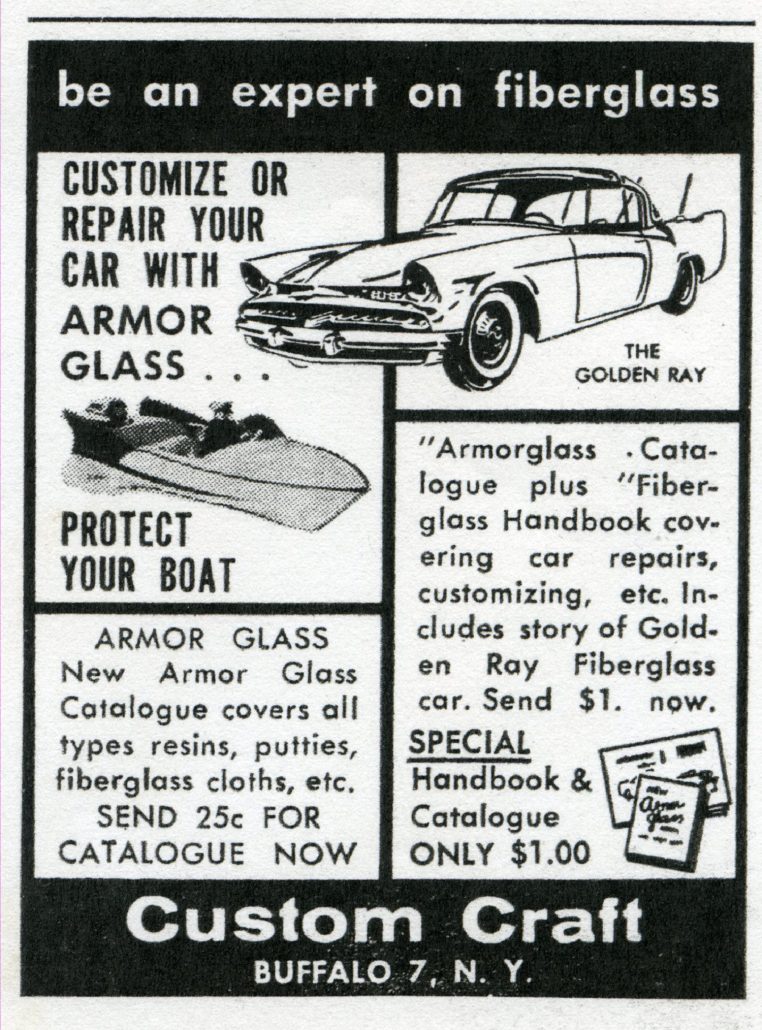 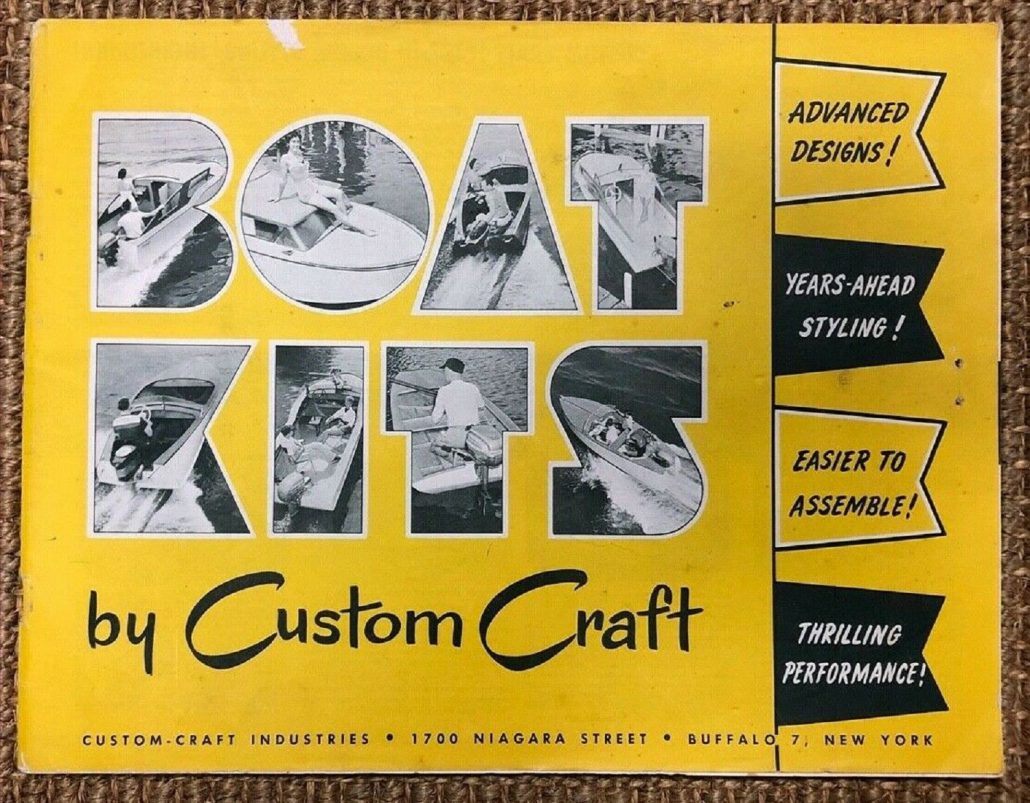 So where is this car today?  I hope hiding in some garage waiting to be discovered by one of our Undiscovered Classics brethren.  How fun would it be to find this car today and bring it back to its original glory.

Great thanks to Glenn Brummer and his initiative in putting this story together for us.  The colorized photo was courtesy of Glenn’s son Jeff – the father/son combo for this article was excellent and greatly appreciated.