One of the most famous Meteor SR1 sports cars ever completed was built in Oregon by Larry Eave, Chuck Rich, and Orville Withey in the mid 1950s.  This Meteor was built for speed and raced too.  In fact, photos in today’s article show the car head to head with an Aston Martin at the Tillamok, Oregon road race in 1956.  This was one special car and that’s the reason, no doubt, that Sports Car Illustrated decided to include it as a feature car in their November 1957 issue.

The appearance in Northwest racing circles of a bright red roadster bearing a resemblance to several expensive European racing cars has set tongues to wagging.  The most consisent rumor has it that a very wealthy Portland, Oregon manufacturer has taken delivery of a custom-built 4.9 with which he intends to waylay the Carsten’s HWM, the Fogg Cad-Allard, etc., etc.  The truth of the matter is that the sleek, hungry-looking job is the latest special built by Larry Eave, a lifelong resident of Portland.  It’s true that the lines of the body had their origin in the land of red wine and buxom women, but other than that the guts of this one-of-a-kind road racing machine are as American as the Chevrolet automobile.

Every hot blooded male that is lucky enough to spectate at, or participate in, a road event departs at the day’s end with an almost overwhelming desire to own “that fabulous Ferrari”.  Essentially this is what happened to Larry.  The only difference was that Larry didn’t want to buy one of Enzo’s screamers; he wanted to build a car that would stay with them. 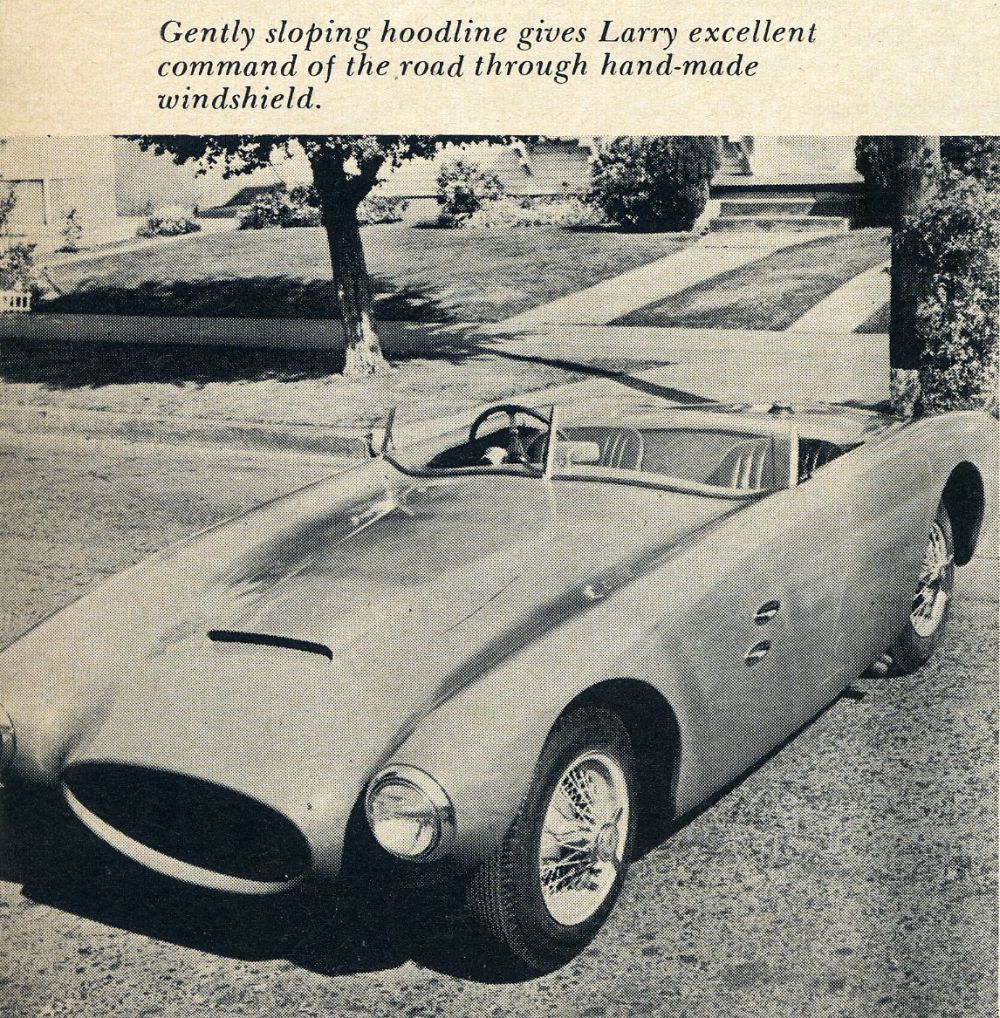 Ordinarily these day dreams, or rather after-race dreams, would go no further; but Larry is no ordinary guy.  Though he is now a white collar man, the business of building cars was not new to him.  He had cut his pinkies on the over-stressed inserts of a couple of quick strokers run in the savage glare of the Bonneville salt.  Even the sports car kick was not new.  He had stuffed an Olds in a set of his own rails, and though it lacked road manners, it taught him a lot about suspension, metals and weight distribution.  The big difference in the development of this car, compared with his other automotive ventures, was in the planning stage.

Larry got together with Chuck Rich, a close friend, and Orville Withey, a crack machinist loaded with race car know-how.  The three of them evolved a car design completely original to sports car racing.  The power plant for the car, a Chevrolet V-8, dictated to a great extent the basic layout of the frame.  The size, placement, and bracing of each member was carefully considered before any attempt was made to start the actual construction of the car.

When the plans were complete, the materials for the frame were purchased and the actual job of putting the frame together began.  A pair of 4 inch diameter 16 gauge tubes were laid down for the side members of the backbone.  The members were placed 22 inches apart at the rear, with the front ends 3 inches closer, forming a slightly tapered rectangle.  The front and center crossmembers of 3 inch by 16 gauge seamless tubing were welded in place after being located and modified, per the drawings.  A piece of the side tubing was sectioned on the bias to form a rear crossmember that would kick up over the rear drive.  Nothing more was done on the frame until the body, a Dick Jones SR100 fibreglass shell, arrived and measurements were taken of the shell’s bulkheads and lower openings.  A frame was then built from 1 1/4 inch by 16 gauge square material to carry the shell, as well as the steering, shocks, hydraulic cylinders and lines.

The Withey-designed front suspension, consisting of a straight two-inch tube suspended on a 9 leaf transverse spring, was shackled to a pillar fabricated from steel plate and welded to the center of the front crossmember.  The design had been successfully worked out on a midget racer built by Orville some years before.  Like so many of the good designs in racing, this layout was simple, yet light and strong. 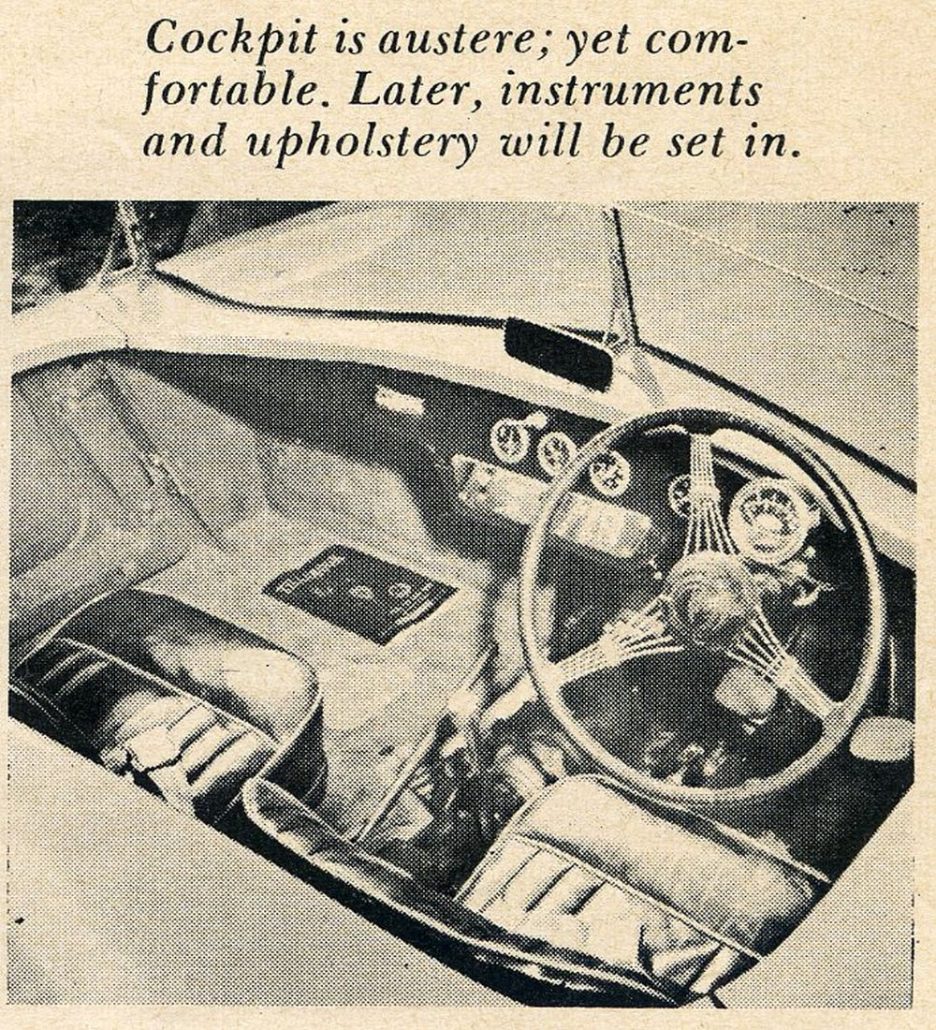 For lightness and, at the same time, strength, a set of Ford Model A rear axle housings were to be used for the rear axle and the Halibrand quick-change center section.  These were shortened 3 1/2 inches per side.  The modified axles and housings were mounted on a pair of longitudinal torsion bars.  The rear radius rods could not be attached to the torque tube, since the latter was to be drastically shortened to accomodate the 98.5 inch wheelbase.  Full floating anchors were made up and welded to the main frame.

A ’55 Chevy Saginaw steering box was fixed to the body support frame on the right hand side of the chassis.  The idea was to place the weight of the driver on the inside of most turns encountered in road events.  A hand-made pitman arm reduced the steering to 2 turns from lock to lock.  The steering drag link and cross tube were made from 1 1/16 inch O.D. x 5/32 inch Shelby.

Larry found a good set of Dayton Centerlock wheels in the shop of an old-time race-car owner.  These were sent to Pico in Los Angeles where they were restrung to modern 15 inch rims.  While waiting for their return, the boys mounted a set of Bendix 11 x 2 1/4 inch juice binders to the front axle and a new set of 12 x 1 3/4 inch Ford brakes to the rear end.  A set of 3/4 ton GMC truck spindles were machined to fit the front axles and Bendix back plates.

Work progressed on the chassis to the point where the mill was due to be dropped in for a trial fitting of the mounts.  Before installing the engine Larry pulled the thing apart and sent the crank assembly, a set of J.E. domed pistons, and the necessary rings and bearings out to be statically and dynamically balanced.  Since the block was to remain stock, it was laid aside pending the return of these parts, and extensive rework of the cylinder heads was begun.

The intake manifold gaskets were lined up on the heads and the gasket openings scribed on the cast iron.  A high speed grinder was used to clean out the ports to the scribed line.  This procedure was repeated on the exhaust side of the heads.  The grinder relieved and polished the combustion chambers and the under side of the valve seats.  The exhaust valve seats were recut to take 1.625 inch valves, but stock intake valve sizes were retained.  The heads were then fitted with the lightened and polished valves and “Isky” dual springs, which gave a total closing pressure of 200 pounds per valve.

When the pistons and crank assembly were returned the mill was assembled with a new Iskenderian “Revmaster” cam, a chopped 21 pound wheel, Edelbrock triple manifold and Spalding ignition.  The pan was also enlarged to 10 quarts capacity. 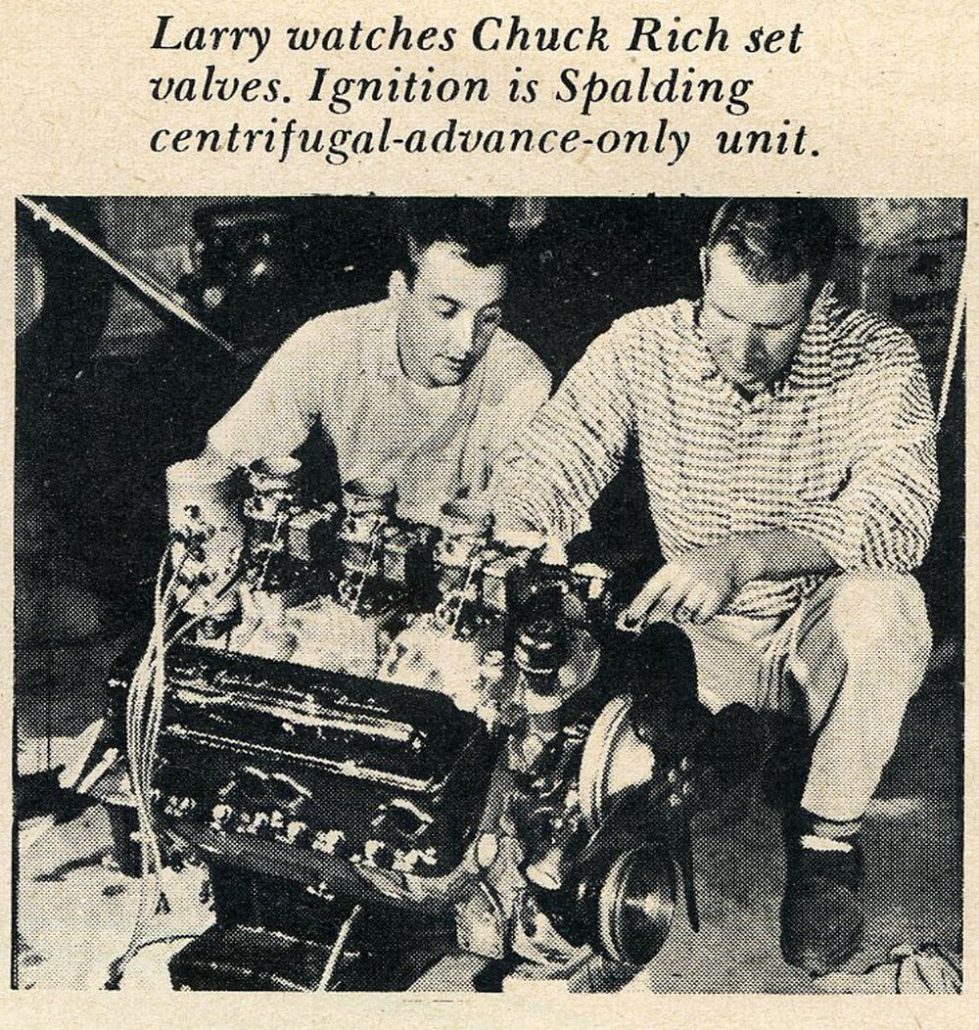 An Auburn 10-inch clutch was bolted onto the flywheel and the power package held over the frame while the mounts were readied.  A Ford side-shift box was to support the back of the power plant, so the two were bolted together (using an adapter housing) and dropped in place.

The many tedious little jobs, such as wiring, fitting of hydraulic lines and headers followed, until finally, the rig was ready for the body it was to live in.  With the help of many friendly hands, the shell was lifted over the frame built for it on the chassis.  Once in place, holes were drilled in the shell to match those in the steel pads, and the two bolted together.  Such body work as cutting and fitting the doors, trunk and windshield mounts followed.

The cockpit was finished with “Zolotone”, a finish used extensively in fibreglass boats.  Upholstery was to be added later.  A pair of Ford “Angelia” front seats were reupholstered and secured to the floor.  Though austere and functional, the “office” was comfortable. 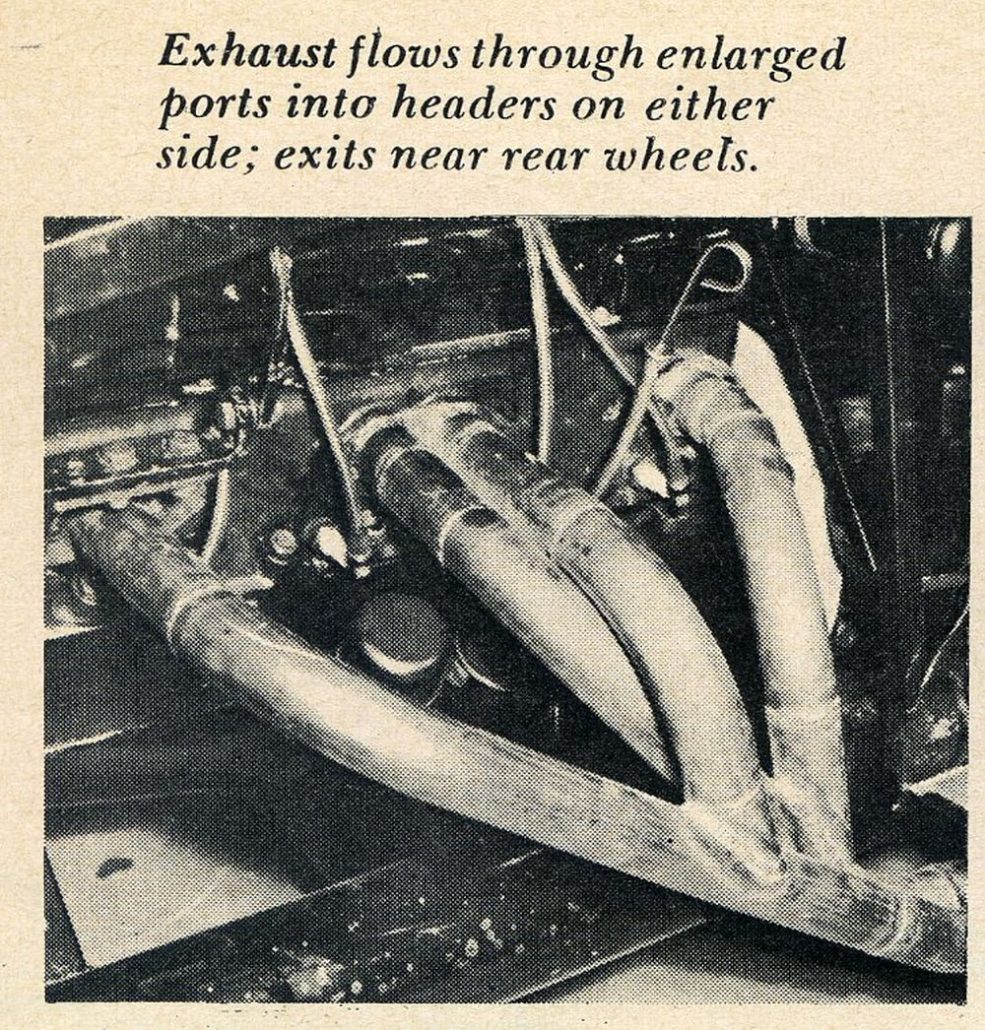 When Larry thumbed the starter for the first time, the feeling of relief that came over his face when the hairy mill crackled to life was a sight to see.  The engine was given a good shakedown, and then a short road test was run on the car.  The acceleration bordered on the savage side, with the standing quarter being covered in 13 seconds for 105 mph.

The 0-60 run took but 6 seconds, and the speedometer needle wiped the face in a steady sweep to a 140 reading.  The engine reved happily through gears–plenty willing to exceed 7200 RPM.  Handling was excellent after several changes had been made in caster and camber.  The car felt terrific when powered through the turns, and when broken loose it drifted with a feeling of stability and control.  All up weight scaled 2000 pounds, with 48% front and 52% rear. 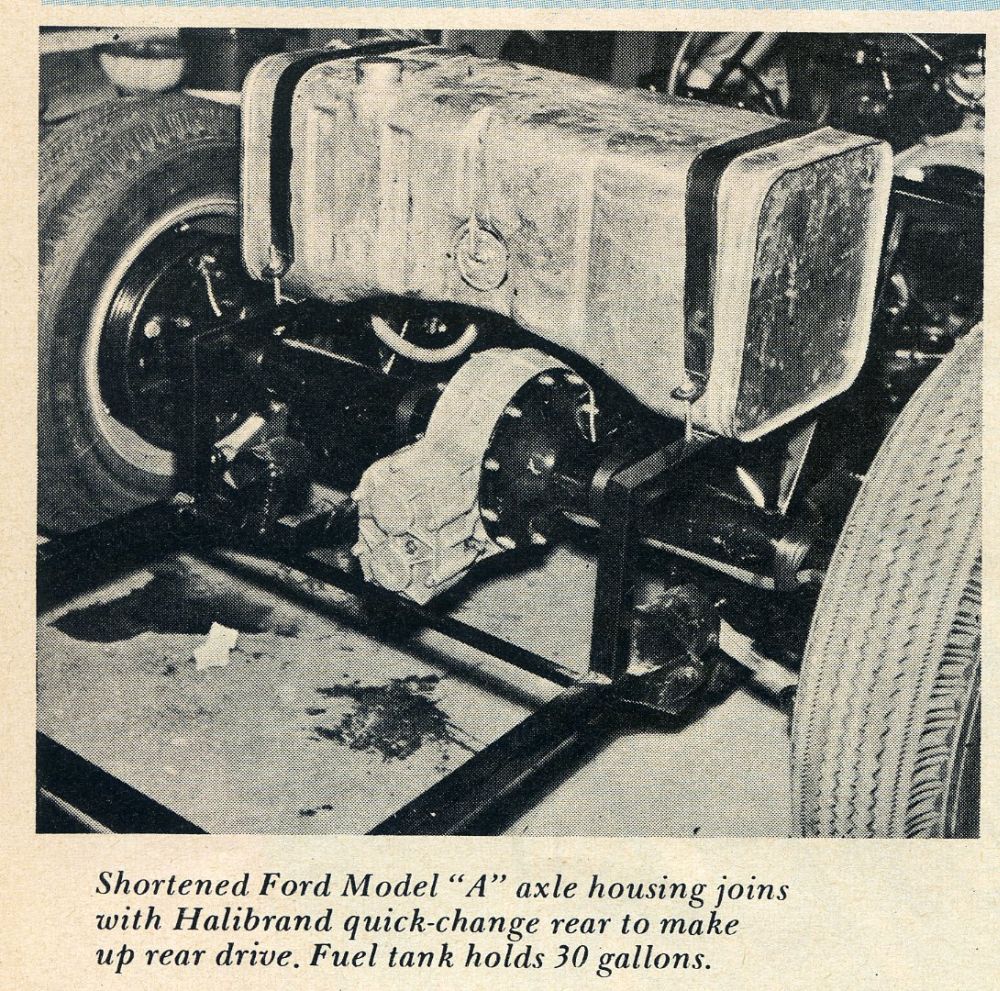 Though the actual proof of pedigree will come when he has a shelf covered with the loot won in road races, Larry feels that for the first time he has achieved what he originally desired in a special.  More than warmed over, the Chevy mill is extremely flexible.  It is just as happy shuffling along doing the lock step in traffic as it is reaching for those high road race rpm’s.  For those who cut their automotive teeth on Ford suspension and Franklin steering as Larry did, the ride and steering of this special leaves little to be desired.  Even with a quick 2 turns lock to lock, the wheel can be turned without effort.  And, unlike the usual roadster, the car takes to slow speed running over “pave” without cushioning the kidneys off the rib cage.  It runs as well as it looks.

What a great car and a terrific find for anyone lucky enough to locate it.  The Larry Eaves Meteor was last seen in the 1980s, and you can click here to review the last story I wrote about this car as well as another article that featured it back in 1957. 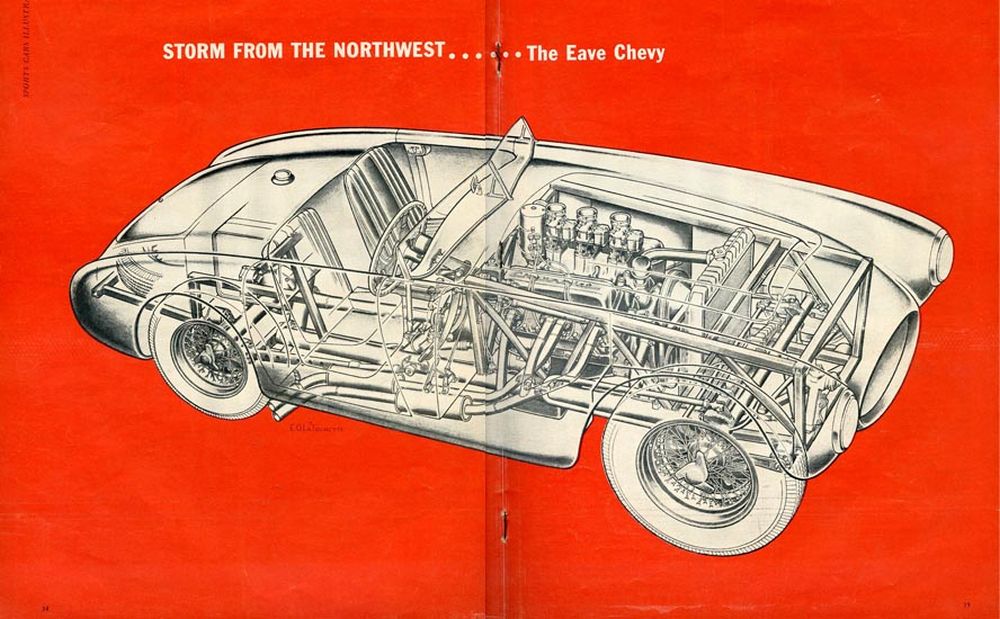 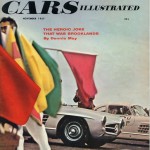 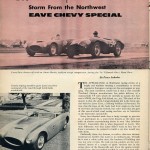 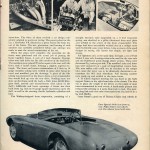 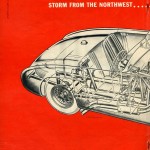 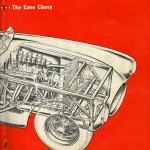 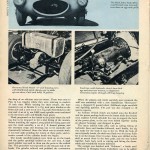 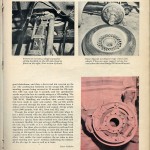 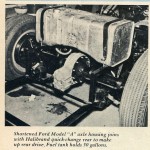 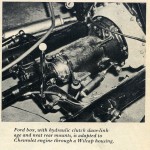 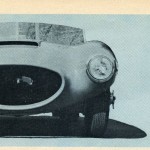 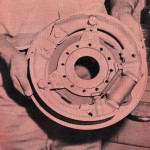 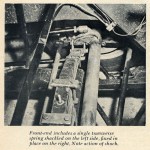 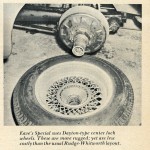 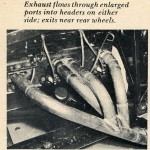 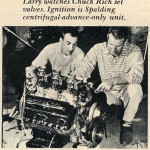 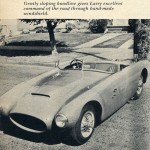 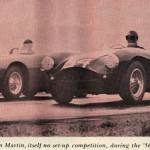 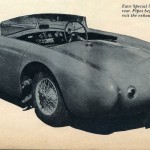 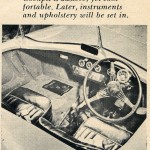 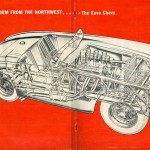 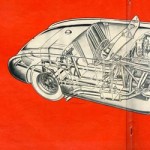