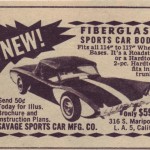 Where O where is Jim Webb of Berkeley?

I’ve been searching for him and his family for many years now, and I’ve found everything but Jim.  Thanks to Hugh Nutting who was a friend of his, we have some early history on Jim and his family.  I’ve found brochures, pictures taken by Jim of his cars, letters from him to customers…..I’ve even visited the home where he lived with his parents in Berkeley, California (near San Francisco) in hopes of getting clues to where the family (he and his brothers) may be.

Well….after reviewing what I wrote above, I feel like a “fiberglass stalker.”  However, I like to think of myself as more of a “fiberglass groupie” 🙂   Time will tell….

In any event, Jim Webb produced a great fiberglass sports car.  In the coming months, I’ll run several stories on what we know about the Savage.  To introduce you to Jim and his car, let’s take a look at two articles today – one from “Custom Cars” and another in a Fawcett Book Titled “Griffith Borgeson on Hot Rods.”  Both are from 1959.

In this Fawcett Book, the Savage is covered in a section titled “Sports Rods You Can Build.”  The article on the Savage spans 3 pages and includes many pictures.  Let’s review the article in its entirety: 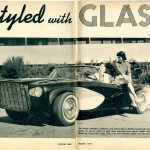 Not Only Was the Savage On The Cover of Custom Cars Magazine – It Had The Centerfold Of The Magazine Too. Jim Webb Was 18 Years Old When This Magazine Featured His Car. Wow!

“Sports Rods You Can Build:

Here are four well-designed fiberglass bodies, easy on the wallet

“The elegant Savage is no primitive.  Designed by Jim Webb of L.A.s famous Art Center School, it has had all the benefits of a civilized education and in 1958 won the Oakland National Roadster Show trophy for the most important contribution to engineering and design.”

The beautiful Savage body comes in a single fiberglass shell, trimmed, sanded, and primed with a special sealer that helps paint adhere easily and smoothly.  It’s light enough (175 lbs) for competition, sharp enough for any show, and engineered to give the customer plenty of room for his customizing whims.

The body can be mounted on any 114” to 117” wheelbase and is easily modified for 100” to 120” wheelbases by cutting out an easily-spared (cut-out) section directly in front of the rear wheel well.  This surgery is superficial rather than radical:  you cut across the height of the fender area, not across the entire body, and the operation costs about $4.

The cowl takes any standard American passenger windshield from a ’50 Ford convertible to late-model full wrap-arounds.  Either dual or single headlights will fit and the body will take a wide variety of folding, bucket, or bench seats and the dashboard and instruments of your choice. 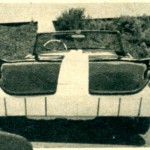 I Love How Jim Styled The Back Of His Savage. You Don’t See Too Many Fiberglass Cars With Rear Wings This Large. Love It!

One of the nicest features of the Savage is the fiberglass hardtop, which, like the cowl, makes  up well to many windshields.  With some minor cutting and reinforcing, the standard one-piece shell can be made into a two-piece folding top which can be stashed neatly in the specially-dimensioned trunk and still leave plenty of space for luggage.

Both top and body can be easily joined to metal parts.  The polyester resin with which the body is made can be used to rejoin body sections, add panels, supports and brackets, or alter the body itself.  It takes just a paint brush and a mixing can to mount the body, a saw and a file to change it.  A convertible header bar or bow can be laminated into the top by epoxy resin, which “welds” clean, unpainted metal right to the fiberglass for a very solid, substantial structure.

For a strong union with the chassis, Webb recommends using the original body mounting holes on the chassis for the brackets.  A thin sheet steel rectangle placed over an inch-thick Styrofoam block and laminated to the interior of the body opposite the chassis bolt hole gives a strong mounting surface for a flat or angle iron bracket.

The Savage body shell costs $595, f.o.b. Los Angeles, and the hard top is optional at $120.  Webb estimates that an additional investment of 600 to 800 man hours to build up and finish the car will pay off in the Savage as beautiful as your own.

For his own car, the designer chose a ’56 Plymouth windshield, a ’46 Packard rear end, and a ’56 Pontiac V-8 mill.  He made his own Corvette-type floor shift to fit a Packard transmission.  The paint is dark candy apple, with cream-colored wheel wells and trim.” 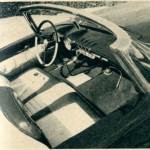 Look At The Detail In This Close-Up Of The Dash and Interior Of Webb’s Car. The Savage Was Deserving Of Both The Attention And The Awards It Received.

Some Comments on the Article:

I love this car.  Now…wrap your head around this.  Rick D’Louhy and I researched Jim Webb in local California newspapers too and found several articles mentioning him.  The following mention was made of Jim and his Savage in the February 25th, 1958 edition of the “Oakland Tribune.”  It was recounting some of the highlights of the 1958 Oakland Roadster Show:

“Voted a gold trophy for “contributing most to the automotive industry” was James Webb, 17, a Berkeley High School senior…who exhibited a fiberglass sports roadster which he made completely himself from the original mold.”

Ok guys….he was 17.  Yes….17 years old.  I don’t know about each of you but I’m still building up to designing my own car.  I like to think that my first design will benefit from waiting years and years (my delay has nothing to do with lack of drawing talent, I’m sure…*wink*).

The Savage is a very impressive car for anyone to have designed, built, and then won honors at a top show.  I’m very impressed with Jim Webb and hope we find him soon so I can tell him in person.

In this magazine, another article appears, but more of a showcase of pictures with captions.  However, the Savage appears on the cover of the magazine in color – and it’s stunning.   Here are some of the more notable comments in the article (scans of which appear below): 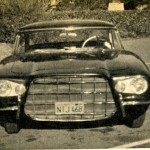 In This View, The Savage Looks More Like The Movie Car “Christine”. It’s Gonna Eat You Alive….

* Futuristic appearing sportster uses a 1949 Chevrolet chassis for a foundation, the car is lowered four inches around.  Color for Webb’s special is Candy Red and off-white.

* Well thought-out design utilizes relief panels as shown on the rear deck.  Notice that the fender line flows over the fin and then forms center concave deck section.

* Jutting from the rear fender fins are 1957 Chrysler taillight lenses which have been frenched and tunneled into the fins.  Eleven months were required to finish the special.

* Cockpit area is completely hand-formed, using combined talent of Webb and his mother.  Dash is from a design and mold by Webb with instruments from a ’46 Chevrolet.  The upholstery was stitched by his mother.  “L” shaped gear shift handle connects driver to Packard transmission of 1936 vintage.

(author’s note:  older transmission was no doubt utilized to get a “floor shifter” in place instead of the more modern “column shifter” of the day.) 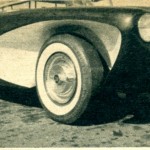 This Close-Up Of The Front 3/4 Gives You A Real Good Feel For The Exaggerated Lines Of Jim Webb’s Savage.

What a well thought out car – and Jim was only 17!  Very impressive accomplishment and I can’t wait to find Jim Webb or his family (brothers and more).  No doubt, they hold the key to some very exciting stories about the car they can share.

Like Victress (Doc Boyce-Smith, Merrill Powell, and Company), Webb went on to sell the molds for his Savage to Les and Joan Dawes of LaDawri.  Jim built 6 or more cars of his own before the Savage became the “LaDawri Centurion” around 1961.  Log books from the Dawes family show another 6-10 “Centurions” being built so the cars are out there gang.

And what a thing of beauty it will be when we see our first restored Savage hit the lawn of a Concours d’Elegance.  I hope Jim Webb will be there to see it. 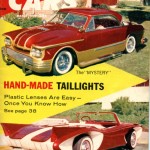 Not Only Was the Savage On The Cover of Custom Cars Magazine – It Had The Centerfold Of The Magazine Too. Jim Webb Was 18 Years Old When This Magazine Featured His Car. Wow! 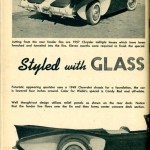 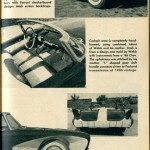 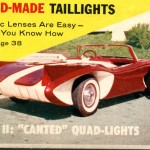 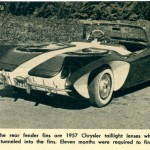 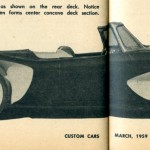 Look At The Detail In This Close-Up Of The Dash and Interior Of Webb’s Car. The Savage Was Deserving Of Both The Attention And The Awards It Received.

This Close-Up Of The Front 3/4 Gives You A Real Good Feel For The Exaggerated Lines Of Jim Webb’s Savage.

I Love How Jim Styled The Back Of His Savage. You Don’t See Too Many Fiberglass Cars With Rear Wings This Large. Love It! 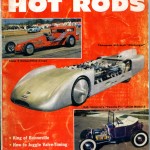 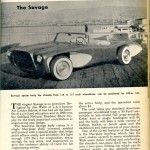 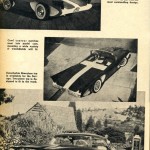 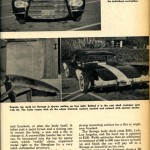 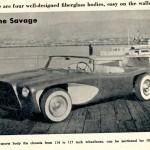 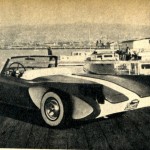 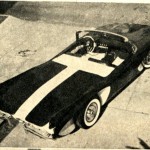 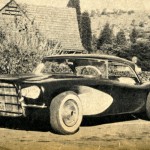 In This View, The Savage Looks More Like The Movie Car “Christine”. It’s Gonna Eat You Alive…. 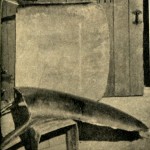 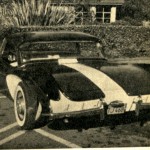 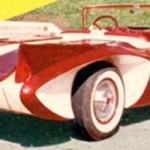