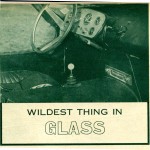 Elegant But Simple Interior Was Designed And Built By Alton Johnson In The Late 1950’s For His LeMans Coupe.

The story of the LeMans Coupe is one of the most exciting to share about any fiberglass car from the 1950’s or 1960’s.  I’ll have to do this in separate articles because each car built had a different story, and the designers, stylists, and people who participated in the build were many and varied.

Just to give you a bit of the taste, the concept of the LeMans Coupe was sponsored by John Bond of Road and Track (Bond was owner and editor of the magazine) and the designer of the body was none other than Strother MacMinn (called “Mac” by his friends) – legendary designer and Art Center College of Design Instructor and Head of their Department of Transportation.

In a series of Road and Track articles in the late 1950’s, John Bond challenged his readers to build a car that could win LeMans – something Briggs Cunningham almost did in the early 1950’s.  Bond helped design the car using experts available to his magazine, and in 4 separate articles on “Sports Car Design”, Bond stepped through a proposal on how to build the body, chassis, and drivetrain.  Then, he challenged the “best builders in America” to build it.

We’ve identified two groups of people who built a LeMans Coupe, and worked with John Bond to potentially showcase their car in the magazine.  Each group knew about the other, and Rick D’Louhy and I are lucky enough to have found the full history of both companies – which we’ll share in “Forgotten Fiberglass” stories in the future.

The story of the LeMans Coupe was featured in many magazines, but today we’ll focus on just one – Hot Rod Magazine from June 1960. 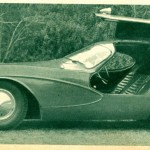 There Were Not Many Cars That Featured Gullwing Doors Back Then – Or Even Now. I Wonder If Strother MacMinn’s Design Using Gullwing Doors Was The First American Car To Utilize This Feature.

* This exciting coupe, built by Alton Johnson of Compton, California, has a cockpit for two; seating capacity is limited by a seat-high driveshaft tunnel since car is only 4 feet high to rooftop.

* In this modern missile age, we are used to exotic-looking creations, but Alton Johnson’s Corvette-engined Victress is in a class of its own.

* Crisp lines of the Johnson coupe are matched by few built to date.  Note that he refused to be bothered by such distractions as grille or bumpers.

* Headlight ornamentation, too, was left off in favor of subtle recessed lamps.

* Fiberglass body is by Victress.  (Author Note: Alton Johnson was an Art center student and Victress employee who worked on his LeMans Coupe on the off hours at Victress.  The car mold and bodies were actually built by Marvin Horton, Ed Monegan, and Alton Johnson.  Alton built his car from the first body taken from the mold). 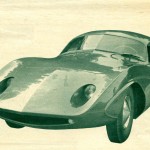 Think About How Innovative This Design Was At The Time. The LeMans Coupe By Strother MacMinn Debuted Around 1958. How Would It Looked Parked Next To A Brand New 1958 Chevrolet or Corvette? Pretty Impressive Gang!

* This is Alton’s second experiment in fiberglass; his first being a roadster built in 1957.  Current car cost $3500, took him two years to build.

I’ve included close-up scans of the magazine images in the gallery of photos below.  The lines of MacMinn’s LeMans Coupe are unforgettable, and I look forward to sharing more history on the LeMans Coupe series of cars in the near future. 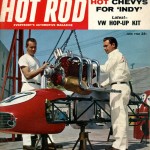 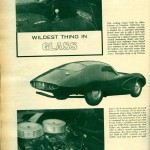 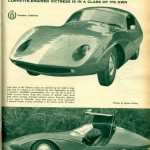 Elegant But Simple Interior Was Designed And Built By Alton Johnson In The Late 1950’s For His LeMans Coupe. 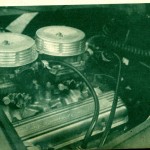 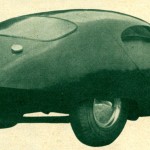 Think About How Innovative This Design Was At The Time. The LeMans Coupe Design By Strother MacMinn Debuted Around 1958. How Would It Look Parked Next To A Brand New 1958 Chevrolet or Corvette Back Then? Pretty Impressive Gang!

There Were Not Many Cars That Featured Gullwing Doors Back Then – Or Even Now. I Wonder If Strother MacMinn’s Design Using Gullwing Doors Was The First American Car Design Created? 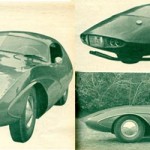