Good Friend Raffi Minasian Was So Captured By The Find Of The Urba Car He Immediately Suggested A New Path To Restoration – The “Urba-Hemi.”

This is the second installment of  a 2 part series of articles on the 1975 Mechanix Illustrated Urba Car.  Here is the link to the first part of this story:

Tracking Down the Builder

When Rick and I picked up the car on the last day of 2008, the title showed the name of the owner:  Paul Brantner.    It turns out that Paul was easy to find (compared to the throngs of others I’ve researched who require much more work – I like the occasional “easy to find” person). 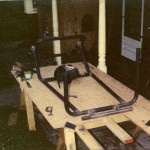 In this package, he wrote: “Geoff, step by step it came to be a car!  I built it on my back porch (small porch) with help of my daughter.   Hope you can use these views of my work.   Paul”

I wish all restoration projects were this easy!  At least in terms of finding historical and accurate information on how the car was built back in the day.   Paul told me it took him about a year to build his car.  He took it to shows in the Cumberland, Maryland area and there was at least one newspaper article about it too.  Let’s look at what was written about Paul and his car back in 1977.

Back in the 1970’s, Paul Brantner’s Urbacar appeared in at least two local newspapers:  “The Cumberland News” on August 22, 1977 and “The Rubber Neck” (published monthly by Local 26, URCLPWA) in September 1977.  Both papers are from Cumberland, Maryland, and the articles were identical in each paper.  This is a great piece about a car that was built at a time when gas was thought to increase to as much as 60 cents a gallon.  Here’s the article for your review: 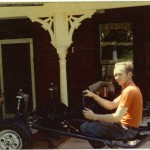 Paul Is Shown Here Testing Out The Frame – With One Of His Daughters Close At Hand.

Building one’s own car from scratch is a difficult job in itself, but the builder then must convince everyone that he did build it, especially the Maryland Department of Motor Vehicles.  This was the case of a South Cumberland man who constructed his own small, two-passenger automobile, and then found out he had to haul it to the DMV in Glen Burnie for inspection before it could be titled and licensed.

Paul, L. Brantner, 37, of 764 Maryland Avenue, first got the idea to build the car when he saw plans for it in a Mechanics Illustrated magazine.  He sent for plans for the car and after a year’s work and approximately $1800 the project was recently completed.  Unlike the would-be sailor who built a big boat in the basement of his home only to learn he had to remove a wall to get it out, Mr. Brantner built his car on the back porch of his home.

Pictures taken during the early days of construction show the car had its beginnings on a large sheet of plywood placed atop two wooden sawhorses used in carpentry work.  Mr. Brantner, a welder employed at Cumberland Welding and Supply Company, was able to use his normal work skills for fabricating the metal frame, but the fiberglass used to mold the car’s body was a new experience for him, he said.

Work on the project took about a year except for real bitter cold periods during the winter months.  Plastic was rigged around the construction area and heat lamps were used to keep the work area warm.  “I’m sure some of my neighbors questioned my intelligence when I started to build the car on the back porch and worked in all types of weather,” he said. 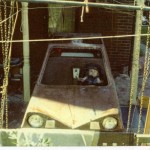 One Of Paul’s Daughter’s Tests Out The Ergonomics Of The Car – Unfortunately For Her She Can’t Touch The Pedals (or see over the dashboard).

The car is powered by a Kohler-built one-cylinder motor with a rating of 16 horsepower.  It has an automatic transmission with an electric reverse gear.  The steering system, the only part not made by Mr. Brantner, operates with only a slight pressure and has little or no play.  The motor is mounted in the rear.

The builder says the car has reached a speed of 55 miles an hour and has a 10-gallon gasoline tank.  The doors are of a gull-type and can be removed, making it look like a semi-convertible or the T-top look of some of the latest model cars.

The car weights only 600 pounds and Mr. Brantner who weighs 125 pounds, is able to lift the front end of the car off the ground without too much effort.  His wife, Sally Ann, said “If I am ever driving the car and it runs out of gas, I’ll just throw a rope around the bumper and drag it home.”

Once the car was completed, the Brantners had to load it on a neighbor’s pickup truck and take it to Glen Burnie.  The Brantners said they had to take along all their receipts to show that it had not been made from stolen parts.  DMV officials said that as far as they knew it was the first completely home-made vehicle ever brought in for a check before the license could be issued.

The only parts the DMV wanted changed on the car before it could be licensed were the front and rear bumpers.  Bar-type bumpers were on the car when it was taken to Glen Burnie, and after returning home Mr. Brantner replaced them with modified bumpers from a Pinto.  Pictures were taken of the new bumpers, sent to Glen Burnie, and license tags along with a plate with a serial number were issued at the LaVale branch of the DMV.

Here Paul Is Photographed With His Recently Completed Urba Car. It Was Painted “Racing Red” – Like All Fiberglass Sports Cars Should Be Painted (*wink*).

The odd-looking bright red car evokes a lot of stares from nearly everyone who sees it on the street.  In fact, Mrs. Brantner said two motorcyclists ran up on the sidewalk as they rode by and saw it parked on Maryland Avenue.   The Brantners have a daughter, Sally, and all three manage to fit into the two bucket seats.  However, Mr. Brantner plans to use the car mostly for transportation to and from work.

There is quite a step up to and over the side on entering the car, and Mrs. Brantner said she probably would be wearing slacks any time she rode in the new car.”

We’ve started restoration on the car, and the first thing I had to do was find a Kohler engine.  Ebay to the rescue again.  We found one close to where Rick lives, and he kindly picked up the small but heavy engine for me.  Since that time, we’ve disassembled the car and began reworking everything from the frame up.

We’re planning a few upgrades to complement both the name of the car and its “wedge” shape.  Let’s review some of the plans:

* Wheels – we’ve already picked up a set of mag wheels made for a 1972 Honda 600.  Hemmings actually did a short story on this feature when I upgraded to the new wheels.  Click here to review the story and pictures of the Urbacar (I call it “Wedgie”) and its new wheels.

* Center wheel emblems and Urbacar badge– we’ve reproduced the Urba Car logo and are creating center emblems for each of the wheels.  We’re also using this emblem on the dashboard of the car 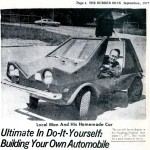 Paul Was One Happy Camper With His Finished Urba Car – Shown Here In A September 1977 Local Newspaper Article.

* Taillights– To reinforce the “wedge” image of the Urbacar, we are replacing the Pinto taillights with 1968 Dodge Coronet taillights which are period correct and “wedge” shaped too.

* Dashboard – We’ve customized a 1957 Chevrolet Truck instrument cluster that is shaped like a “wedge” with a more modern font style, and the Urba Car logo at the bottom center.  It’s been color-coded to complement the planned blue color of the finished car.

In January 2011, I had a surprise visit from Ruth Brantner – one of Paul Brantner’s daughters, and partner Sabrina too.  They had a chance to scope out the progress on Paul’s Urbacar, and gave us their nod of approval on continuing work on the car.  I’m sorry to say that Paul Brantner passed away in 2009, but his legacy lives on with his daughters, their families, and his little “go get-em” Urba Car.

I hope Paul will be pleased with our final efforts on his special little car. 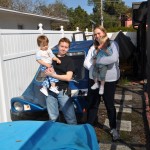 Here Ruth Brantner and Partner Sabrina Stop By My House in January 2011 To Checkout The Progress on Ruth’s Father’s Car – The Brantner Urba Car.

The Urba Car continues its life today as part of the plans offered by Quincy Lynn.  Robert Reiley told me that Paul Brantner’s Urba Car was based on their initial planset (#1) and they are now on their 3rdrevision of the Urbacar.  It’s still selling strong.  As for Paul’s Urba Car, I hope to have it up and running later this year.  Time will tell, as with all restorations.

2/3/2011: Note:  I heard from Ruth Brantner today after she read the article on her father’s car.  She had some new information for us about her father’s car as follows:

“Hi Geoff, I remembered something I meant to tell you about my dad’s car.  My dad was into electronics, as well as mechanics.  He added a security feature to this car – in between the seats, on the back ‘wall’ (?) was a keypad, with a stainless steel cover (home made, of course).  Before the car could be started, a code would be entered, then the car would start.  My mom would remember more about that, since she used to drive it too — I remember the code was something to do with my dad’s social security #….  But I think someone took that keypad out a long time ago – I’m not sure if it was my dad, or someone else.  Anyway, I just wanted to let you know that little detail I thought of.  Thanks again – lots of local people are happy to find out what’s going on with that car!  Ruth”

Here Ruth Brantner and Partner Sabrina Stop By My House in January 2011 To Checkout The Progress on Ruth’s Father’s Car – The Brantner Urba Car.

Paul Is Shown Here Testing Out The Frame – With One Of His Daughters Close At Hand. 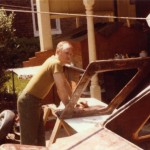 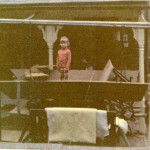 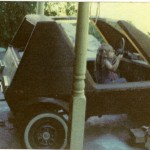 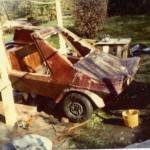 One Of Paul’s Daughter’s Tests Out The Ergonomics Of The Car – Unfortunately For Her She Can’t Touch The Pedals (or see over the dashboard). 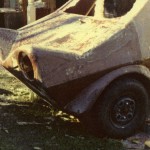 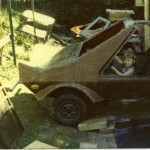 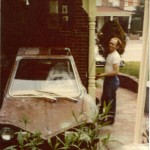 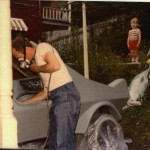 Here Paul Is Photographed With His Recently Completed Urba Car. It Was Painted “Racing Red” – Like All Fiberglass Sports Cars Should Be Painted (*wink*). 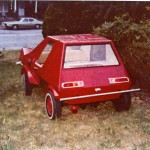 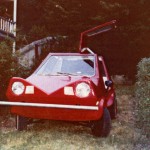 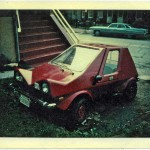 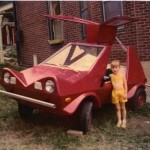 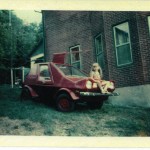 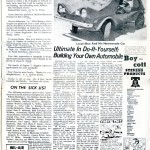 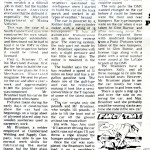 Paul Was One Happy Camper With His Finished Urba Car – Shown Here In A September 1977 Local Newspaper Article.

Good Friend Raffi Minasian Was So Captured By The Find Of The Urba Car He Immediately Suggested A New Path To Restoration – The “Urba-Hemi.” 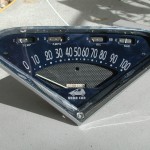 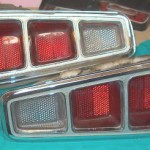 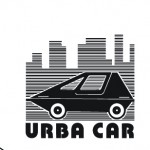 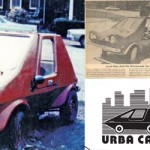