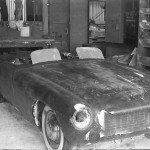 I’ve been doing detailed interviews over the past few months with several of the folks from Victress about the history of their company and car designs.  One of these folks, Mel Keys, sent photos in of an interesting car – one they experimented with as a concept.

That is, after the mold for the Victress C3 coupe was made, they tried out this design and left it in the mock-up stage.  That’s the prototype design for the long lost Victress C3 Roadster.  Today’s story is about this lost concept car – in the making.

After leaving the military in 1954, Mel moved to Los Angeles to begin preparing for his career – which he hoped would be in automotive design.  He was accepted as a student at the Art Center College of Design, in Pasadena California and worked for Victress during this time, on and off again, for at least two or three years.

Mel had joined Victress just when the mold for the C2 Coupe (94” wheelbase) had been pulled (the start of 1955) and they were beginning their work on the plug for what would become the larger and more famous Victress C3 Coupe (99” wheelbase).  His first job was helping to complete the “plug” or full-size model of the C3 coupe.

Mel completed his work on the C3 plug and a fiberglass mold was pulled off of it and prepared to be put into production.  Normally, the plug would be destroyed at this time.  What would anyone need a full size plaster model of a car for – probably weighing over 1000 lbs?   Apparently, though, just like a cat, the C3 plug had one more “life” left in it. 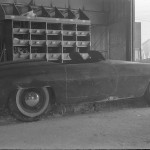 On This Picture, Mel Keys Pointed Out The Vestiges Of Headrests Styled Into The Rear Deck Lid Of The Victress Prototype C3 Roadster.

The plug was re-purposed as the roadster version of the C3 Coupe.  Two roadster windshields were also installed to test the style of the design.  Only 2 images exist of the concept for this car today, and from the pictures, the finished “plug” looks well-refined.  In fact, I’m surprised they didn’t pull a mold from it and offer it as another option for potential Victress buyers out there.  It would have been fairly easy to do.

If you look closely at both pictures, you’ll see that a semblance of head rests were styled into the back of the car behind the driver and passenger.  This is evident on the side view picture as well.  I spoke with Merrill Powell and Bill Quirk from Victress about this concept, but neither recalled any more details than those shared in this story.  Apparently the concept was built, tested, and discarded.  No fiberglass C3 roadster bodies (or mold) were ever made.

That doesn’t mean that C3 coupes could not be converted into roadsters, and that’s exactly what someone did to one of their cars.  David Lucas found his Victress C3 some years ago, and someone had already taken the top off and added their own version of what the deck lid would look like on a C3 roadster.

And they did a very nice job too!  The car looks great Dave – and more importantly, Merrill Powell – Victress C2/C3 designer – says so too. 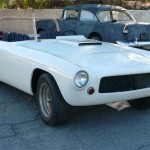 There’s another reason why someone would have made this attractive coupe into a roadster and that is simplicity of “build.”  It’s much easier to finish an open roadster without top and interior, than the work it would take fitting windows, roll-up windows, and a headliner too.  Converting a C3 coupe into a C3 roadster probably shaves 200-300 hours of work off of completing the car.  Maybe more.

There may be some more Victress C3 roadsters out there – perhaps a Victress C2 roadster too.  If found, they would represent a neat addition to our vintage fiberglass family of cars, but in each case this would represent something that occurred after the body left the Victress factory in North Hollywood, California.

On This Picture, Mel Keys Pointed Out The Vestiges Of Headrests Styled Into The Rear Deck Lid Of The Victress ProtoType C3 Roadster. 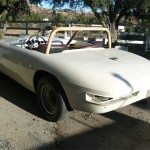 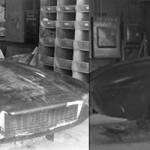