How many different Atlas / Allied ads are there????  Let the counting begin.

As Rick D’Louhy, Tony St. Clair, Erich Schultz, Brandon Kunicki, Bill Fester, Harold Pace, and the scads of others out there continue helping with research, more and more information comes to light.  The latest is the ad strategy of one of my favorite fiberglass sports car companies of the 1950’s – the Atlas / Allied Fiberglass Company.

It’s kind of interesting we’re examining their strategy.  Because…. Bill Burke, one of the principals of Atlas / Allied was working as the Advertising Manager for Hot Rod magazine in 1952 – and earlier – and 1952 is the year of an Atlas ad I found earlier today.  Check out the ad below from Hot Rod Magazine, October 1952: 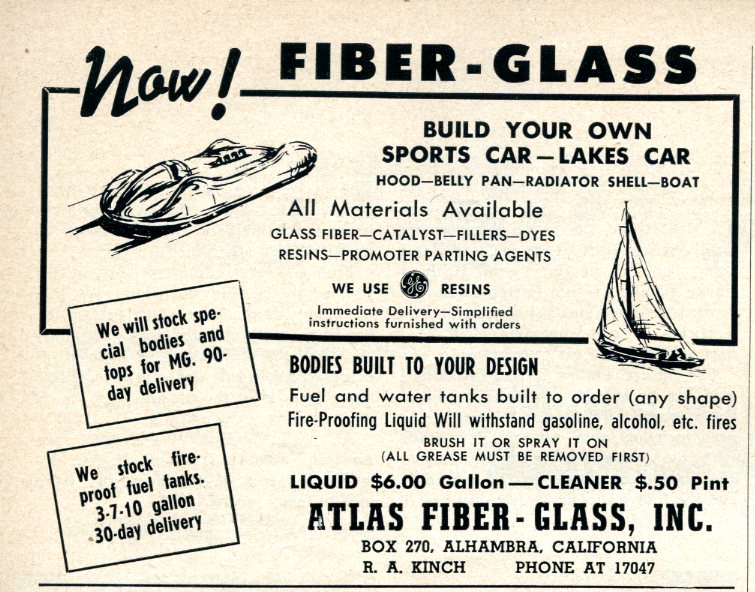 This ad makes mention of only Roy Kinch owning Atlas – and living in Alhambra where Bill Burke met him, and is the earliest ad so far found for Atlas.  It focuses on selling supplies to build your own sports car body or lakes car – maybe even a boat.  And….it also quietly suggests that they will be stocking “special bodies for the MG.”

The next ad that appears is in the December 1952 issue of Auto Speed and Sport and again only mentions Atlas and Roy Kinch.  Both of these ads do not show a specific car body for sale, but promote the idea that you can build your own fiberglass body – and both ads show that “simplified instructions” for building your own body are available.  Rick and I have not come across these instructions yet – I bet they would be interesting, so if you have a copy…send our way.  Nevertheless, here’s the ad: 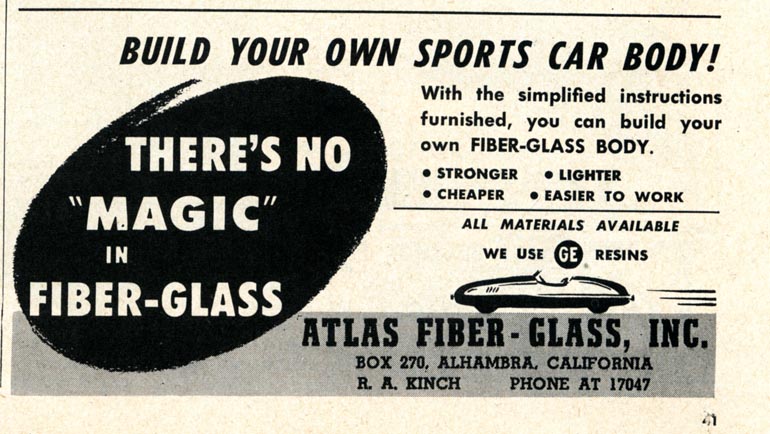 The next two ads we have found show a change in advertising strategy – now the company is emphasizing selling fiberglass bodies.  In the 1953 ad, though, the ad suggests that they also sell, “complete materials to build your own fiberglass body!”  Here in early 1953, the company is still called “Atlas” but the reference to Roy Kinch is left off.

This makes sense because the 3 of them (Roy Kinch, Bill Burke, and Mickey Thompson) are shown working together on an Atlas / Allied body in an article in the December 1952 issue of Motor Trend, so by this time (early 1953)  the company had grown, and was soon to morph into “Allied Fiber-Glass.”  Here’s the ad from February 1953: 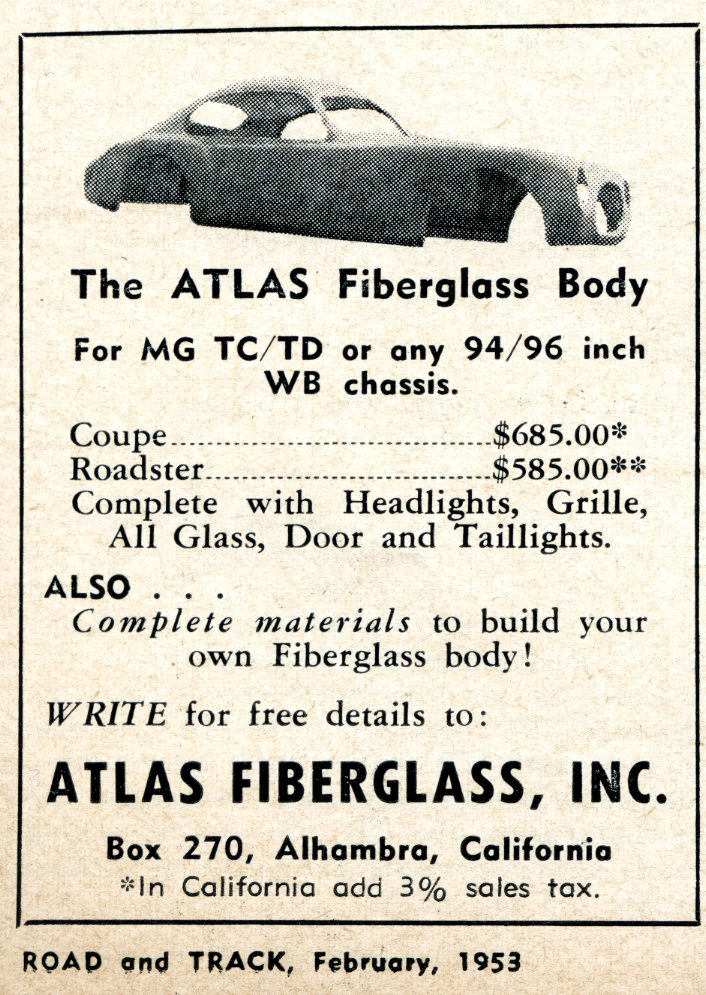 But by 1954, the only reference to sales focuses on the selling of “The Allied Fiber-Glass Body” and no mention of ancillary activities is discussed.  You’ll also notice that Roy Kinch is not mentioned in any of the Allied ads – or any ads showing the Swallow fiberglass body being sold.  Roy is only mentioned when the company is called “Atlas Fiber-Glass, Inc.” in 1952 and is selling supplies.   Here’s the ad that appeared in 1954: 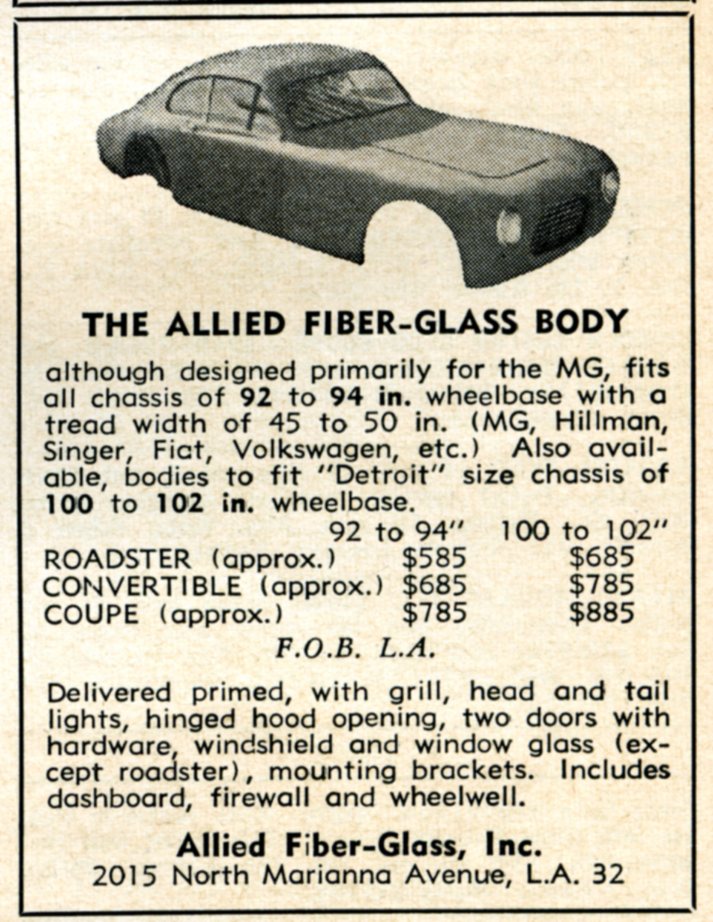 So what does this suggest?

It shows a company growing, evolving, and changing.  Initially, the company was started by Roy Kinch – who in articles about the Allied car, is discussed as having several years of experience in the plastics/fiberglass industry.  No doubt, Bill Burke, who was Advertising Manager of Hot Rod Magazine knew Roy Kinch because they lived so close to one another in Alhambra – and Burke would have been on the inside track getting paid advertising from Kinch to advertise Kinch’s company “Atlas” in the very magazine Burke worked for.

You can paint a picture of what most likely happened – the name of the company changed soon after Burke and Mickey Thompson joined in  – something Bill Burke discussed with me personally during an interview in 2008 in Whittier, California (at his shop on Whittier Blvd.)  So the reference to Roy Kinch was only included in Atlas advertising – when the company focused more on supplies than bodies.

So….the name of the company was switched soon after Burke and Thompson joined Kinch, and they began to focus on bodies only – not a bad idea at all at the time.  No doubt some Swallow bodies may have been sold early on when the company name was Atlas in 1952 and in early to mid 1953 but the larger 100” wheelbase bodies weren’t available until later in 1953 (Motor Trend, December 1952), and the name may have changed to “Allied” by then.  More research will show the answer.

As we continue to gather information from magazines and other sources with your help, no doubt the picture will become much clearer, but for now, I thought you might find these insights useful – especially for you Atlas / Allied owners out there.

Just my musings for the day gang… 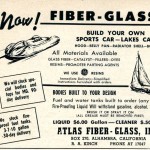 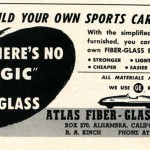 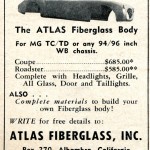 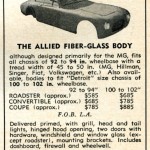 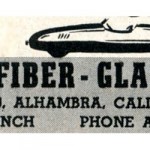