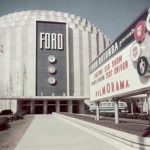 Times Were Changing. The First Custom Car Show Held by a Major Motor Manufacturer Was Staged By Ford At Their Rotunda In 1955.

This is the second installment of multi-part series of articles on:

Click here to read the first part of the story.

Hot rods in Detroit in 1951!  Sports Cars too?  How could this happen?  What was coming of the world?

As I left you in part 1 of this story (click here for part 1), I mentioned that there were two articles that appeared in the November 1951 issue of Motor Trend – a pivotal date for the history of fiberglass cars – that give us insight into the impact custom fiberglass and sports cars were going to have on Detroit.

This is an important date because it was in November 1951 that fiberglass sports cars debuted at the Petersen Motorama for the first time.  And I like to think that the fiberglass world would never be the same.  The editorials and articles in this issue of Motor Trend were a harbinger of things to come.

In Part 1 of this story, I wrote about the implication of Walt Woron’s editorial.  Walt was the editor of Motor Trend from Volume 1, Number 1 – when the magazine started – and his insight into the times was right on target in 1951.  But how would he feel today?  I sought to find out. 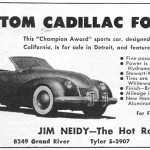 Custom Cars – and Coachbuilt Cars – Were Sweeping Into Detroit in the Early 1950’s. Here The Kurtis Omohundro Comet Is Being Offered For Sale by the Jim Neidy Hot Rod Shop – Detroit, Michigan.

And, by stroke of luck and good fortune, Walt is still with us and living in California.  He’s 90 years old this year and doing great, and I had a chance to talk with him several times about his memories of that time and those cars.  Here’s what Walt shared with me:

Walt felt that Detoit was ignoring what was going on – both in California and across the country.

“Actually…they weren’t ignoring what was going on”, Walt told me…..”they were criticizing it.”   Walt went on to say, “

“I heard criticism from the guys in Detroit such as ‘they don’t know what the heck they (customizers and hot rodders) were doing.’  Detroit was criticizing what the customizers, designers, and hot rodders were building.  Instead, they (Detroit) should have been exploring what these same folks were doing – and doing so well.”

But…. as you read beyond Walt’s initial editorial in the same November 1951 issue of Motor Trend, you come across another gem – an article about sports cars in Detroit – and the history of sports car design in America – by Harry Cushing.

Let’s explore the article and as we do – think about how it’s related to Walt’s editorial in the same issue and why this is important to the history of fiberglass sports car design in America (I feel like a school teacher again….my profession can’t escape me…)

Detroit Michigan:  The use of automobiles for sports purposes is taking a solid grip on a rapidly-increasing circle of Detroiters.  English sports cars, customized versions of standard Detroit production jobs, intricate hot rods and even professional racers are making their presence felt here.

Sports Car Bombshell:  This may not be sensational news to Motor Trend readers in some sections of the country where such activities are accepted high points of modern living but, in this conservative capital of motordom, it is a bombshell!

For, the various aspects of motor sports are receiving, at last, favorable attention from key auto industry executives.  In the long run, this sports movement quite likely will affect design and operating features of tomorrow’s cars.

To appreciate the importance of this development, Motor Trend readers should realize that for many, many years, the American auto industry has publicly shunned anything associated with pleasure use of its products.  Both individually and collectively, Detroit manufacturers have sought to impress upon customers the utilitarian role of cars.

It has been verboten within the industry to consider driving as fun.  Speed – even with safety – has been a forgotten noun.  And, the products from Detroit’s assembly lines have, in most instances, faithfully expressed this philosophy.

Now, however, hundreds of Detroiters have joined the ranks of those who buy and operate cars for pleasure.  The president of the local region of the Sports Car Club of America, Bill Wood, reports there are over 150 true sports cars in operation on Detroit’s streets.

Three years ago, you would have been hard put to find such a vehicle in the motor city. Today, the SCCA boasts 140 members with a long waiting list of applicants.  On the club’s roster are leading designers and engineers of most automobile companies.

Two years ago, there were virtually no hot rod adherents in the Detroit area.  Now, according to Don Houck, coordinator of activities for clubs in this part of Michigan, there are two major groups in Detroit and a big one in Flint, Michigan.  Membership already stands at 150, with a foreseeable peak of 500 enthusiasts.

These organizations stress safety to their members, and encourage engineering and design talent.  One of the exciting signs of the industry’s increased interest in such sports activities came in August as part of Detroit’s 250th Birthday celebration.

Through the direct assistance of several automotive leaders, a 250 mile stock car race was staged under the auspices of NASCAR.  Almost 20,000 spectators jammed the track area, including top representatives of nearly every motor car firm. 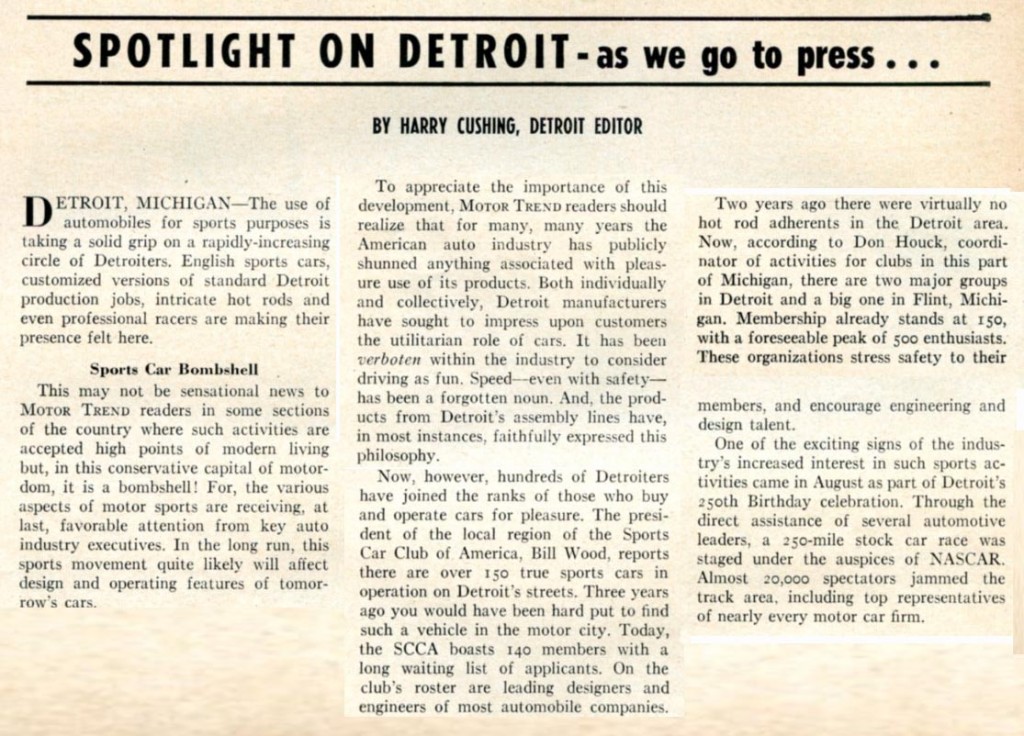 Walt was responding to what Detroit was criticizing and not paying attention to.  Harry was showing that initial inroads were being made in Detroit and by implication – others in the Motor City better “get on the wagon” or be left behind.

Walt’s focus was more on the custom and hot rodders influence while Harry focused on more of the European influence, but they both stated the obvious.  Detroit needed to look outside itself and capitalize on what was happening elsewhere.  And designers building beautiful fiberglass bodies for use as sports cars across American were at ground zero – what I call “The Big Bang of Fiberglass” when this movement started to happen.

At the end of the interview, Walt shared the following with me concerning customizers and hot rodders today:

“It’s hard to recall exactly what I thought at the time (the November 1951 editorial he wrote).  I know that I do stand behind everything I said then.  I’m not in a position actually – I’m too far removed – to comment specifically on today’s customs and hot rods.  But…from what I’ve seen…they should realize that what I said back then still applies today in terms of custom builders and hot rod builders impact on car design in Detroit and across the world.”

Walt was a visionary then as he is now.  Designers everywhere would do well to heed his advice nearly 60 years after he initially published his thoughts in November 1951, Motor Trend.  Not bad for a 90 year young man – is he gang?

Thanks again to Walt Woron for spending some time with us and sharing his memories.