Nick Whitlow is the “king” of all things CRV.  He’s been collecting information about these cool 1960s sports cars for years before I started researching vintage fiberglass cars with Rick D’Louhy, so having a resident expert on hand for one of the cars in our “Forgotten Fiberglass” gang is a pleasure in every way 🙂

Recently, in my quest to uncover more details about all things vintage fiberglass, I located a “press release” photo which may turn out to be the “big bang” or starting date for the announcement of the CRV Centaur Sports car – a car that later became known as the “CRV Piranha.”   At this time, this is the earliest known announcement of the CRV-Centaur sports car.  Let’s see what the press release photo and caption had to say and show.

Press Release / Design Photo
Do It Yourself Speedster
January 7, 1965 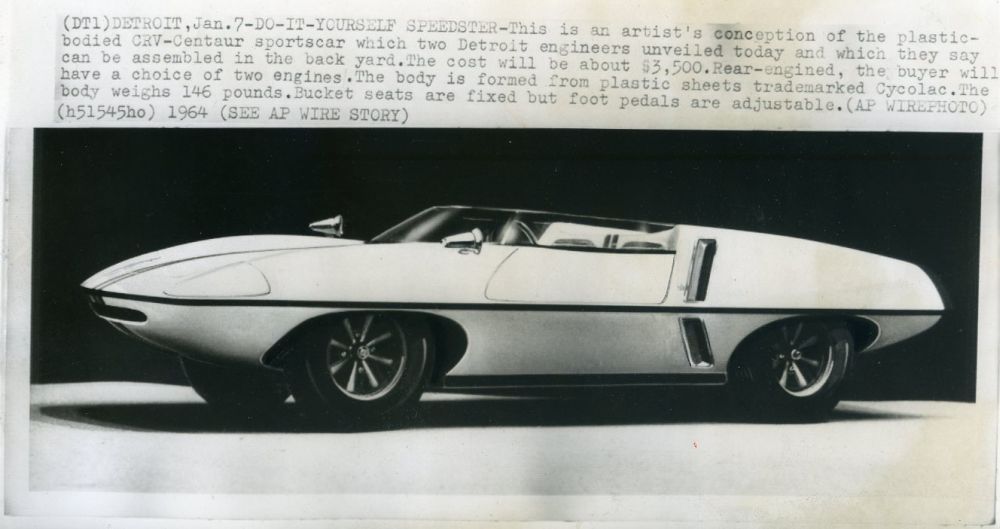 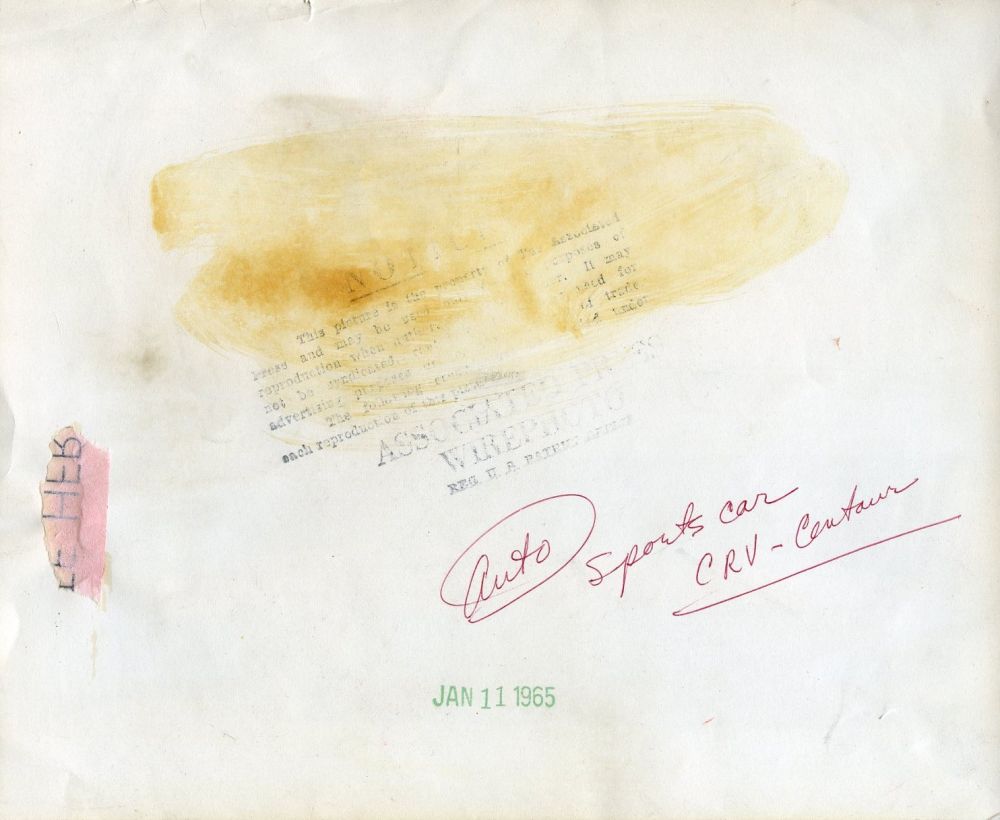 Detroit, January 7, 1965 (AP) – This is an artist’s conception of the plastic-bodied CRV-Centaur sportscar which two Detroit engineers unveiled today and which they say can be assembled in the backyard.  The cost will be about $3,500.  Rear-engined, the buyer will have a choice of two engines.  The body is formed from plastic sheets trademarked Cycolac.  The body weighs 146 pounds.  Bucket seats are fixed but foot pedals are adjustable.

By the way, from what Nick and I can tell, the year shown in the photo is 1964 and this is most probably when the photo was taken.  Or it simply could be a mistake.  All public announcements using the verbiage in the photo and the photo itself occur in January 1965.  Which leads us to our next example – an in-paper reference related to this press release. 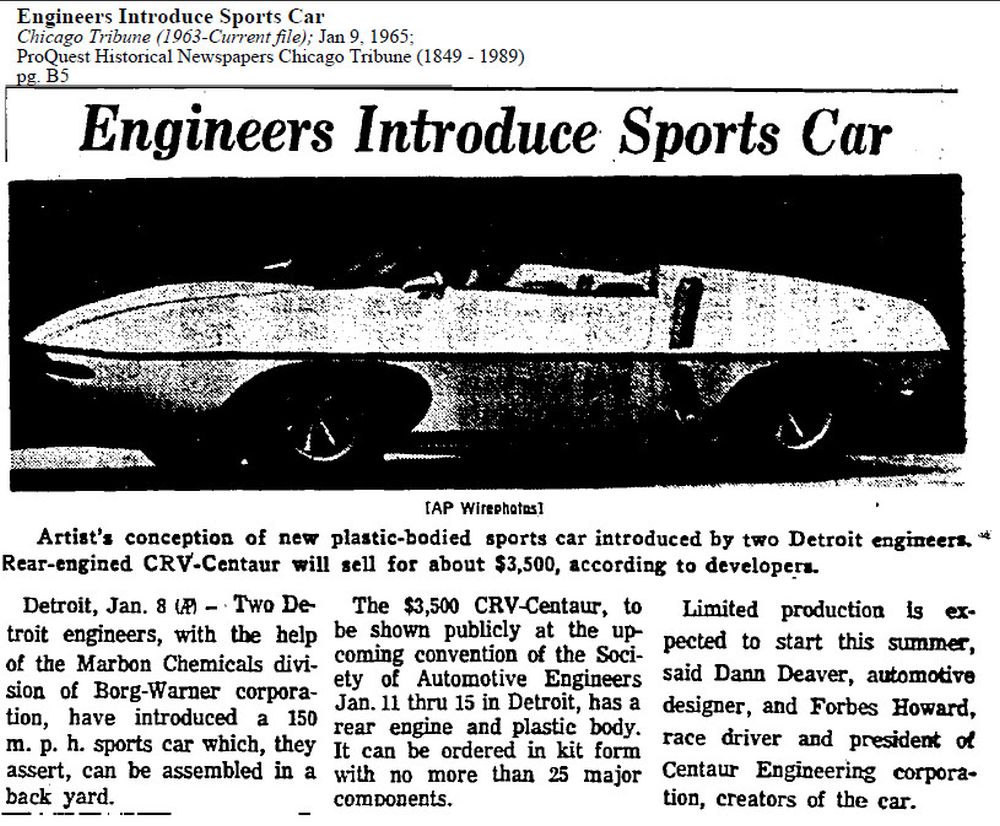 Caption: Artist’s conception of new plastic-bodied sports car introduced by two Detroit engineers.  Rear-engined CRV-Centaur will sell for about $3,500, according to developers.

Detroit, January 8, 1965 (AP) – Two Detroit engineers, with the help of the Marbon Chemicals division of Borg-Warner corporation, have introduced a 150 mph sports car which, they assert, can be assembled in a backyard.  The $3,500 CRV-Centaur, to be shown publicly at the upcoming convention of the Society of Automotive Engineers January 11 thru 15 in Detroit, has a rear engine and a plastic body.  It can be ordered in kit form with no more than 25 major components.

Interestingly, this press release is dated one day later on January 8th, 1965.  So…Nick and I will have to be on the lookout for more information out there in eBay land.

I talked over my findings with Nick Whitlow and what I can tell you is that he never disappoints.  Nick produced two more photos of the design model used for the CRV – undoubtedly designed and created in 1964.  As you review the photos below, you’ll see some differences from the ultimate press release photo of the model – perhaps airbrushed in the photograph.

Thanks very much to Nick Whitlow for allowing us to share these photos below.  We at Forgotten Fiberglass are grateful for his support. 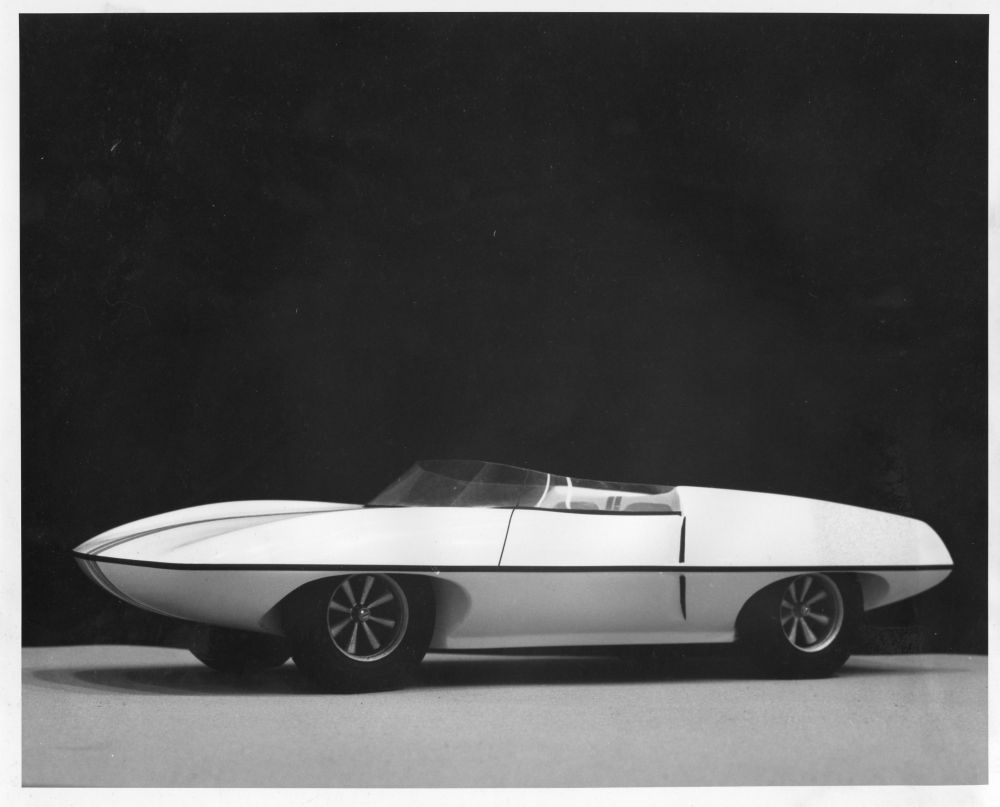 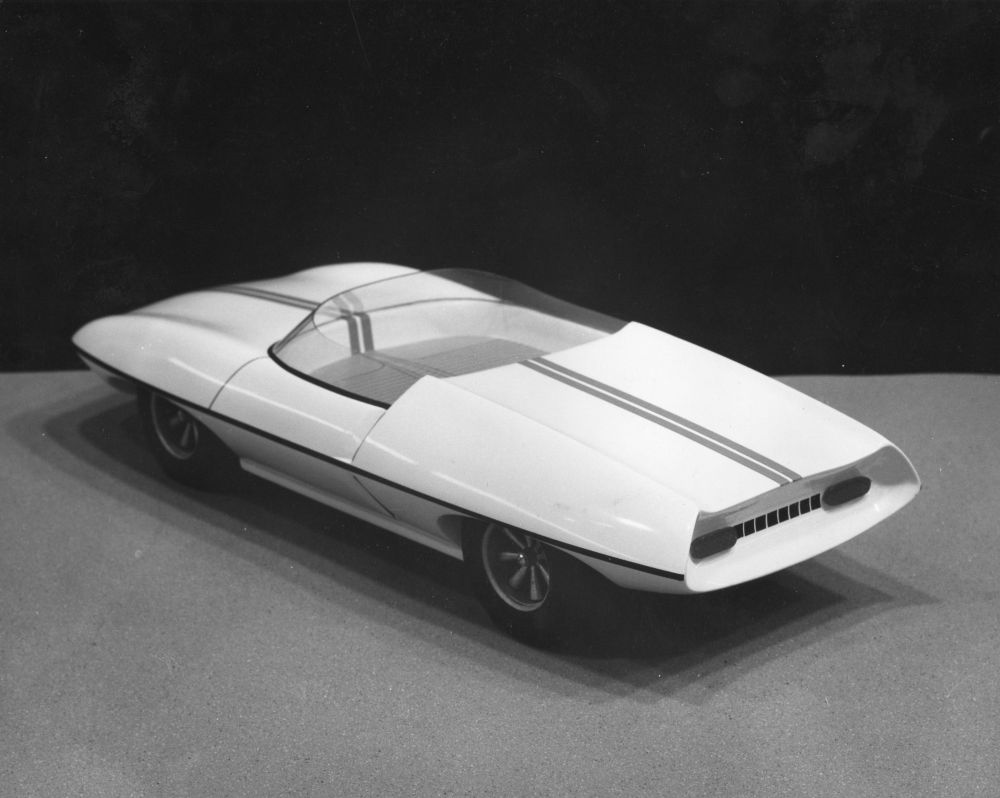 Thanks again to Nick Whitlow for his help with research and information concerning the CRV sports cars, and if you have time check out his fantastic website on these cars by clicking on the link below: